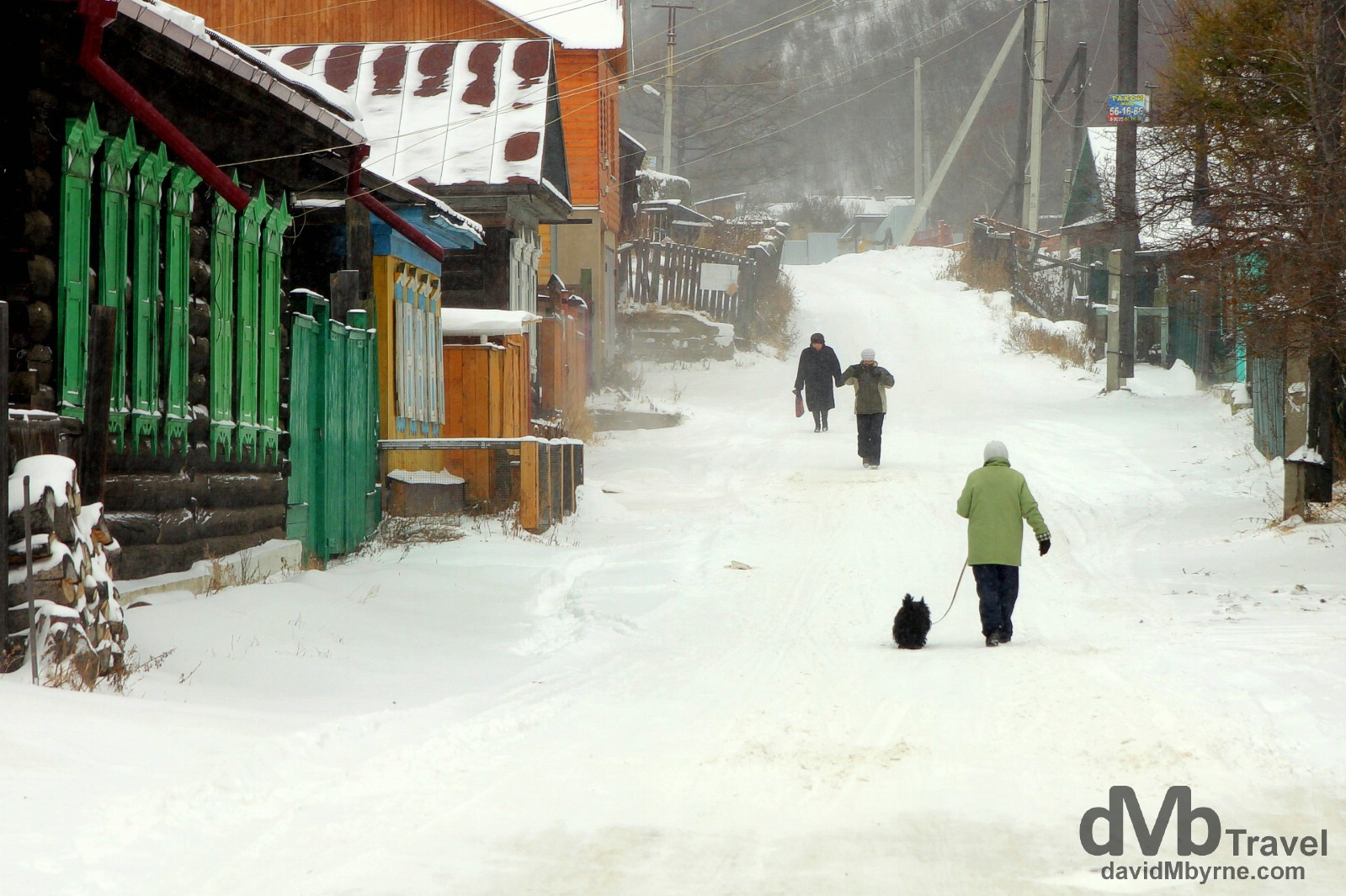 There’s plenty of snow here in the village of Listvyanka on the shores of Lake Baikal, Siberian Russia. And it’s still coming down. Is it ever. It has been like this since I stepped off the bus from Irkutsk earlier this afternoon so I don’t know when it started. It doesn’t look like ending any time soon. I hope it doesn’t. It’s awesome. A real here & now Siberian Winter Wonderland.

Wrapped up locals battling the elements on a street in Listvyanka (

) on the shores of Lake Baikal. The street is lined with cozy wooden, quintessentially-Siberian houses, the kind you see all over Siberia. Listvyanka, Irkutsk Oblat, Russia. November 9th 2012

Battling the snow earlier in a bid to get to my log cabin in the hills behind the village was fun. Slow going but fun. I like snow, even heavy, incessant snow. It’s still novel enough for me to do so, even having lived in Canada for a period & living through a few of their winters. But it’s also fun, warming even, to watch heavy snow falling from behind the panes of a cozy in a log cabin. All that said, and as enjoyable as my limited time in Listvyanka has been thus far, I didn’t come here to battle snow or view it from the warmth of a log cabin. I came here to see Lake Baikal, The Pearl of Siberia, something it hardly resembles in this kind of weather. 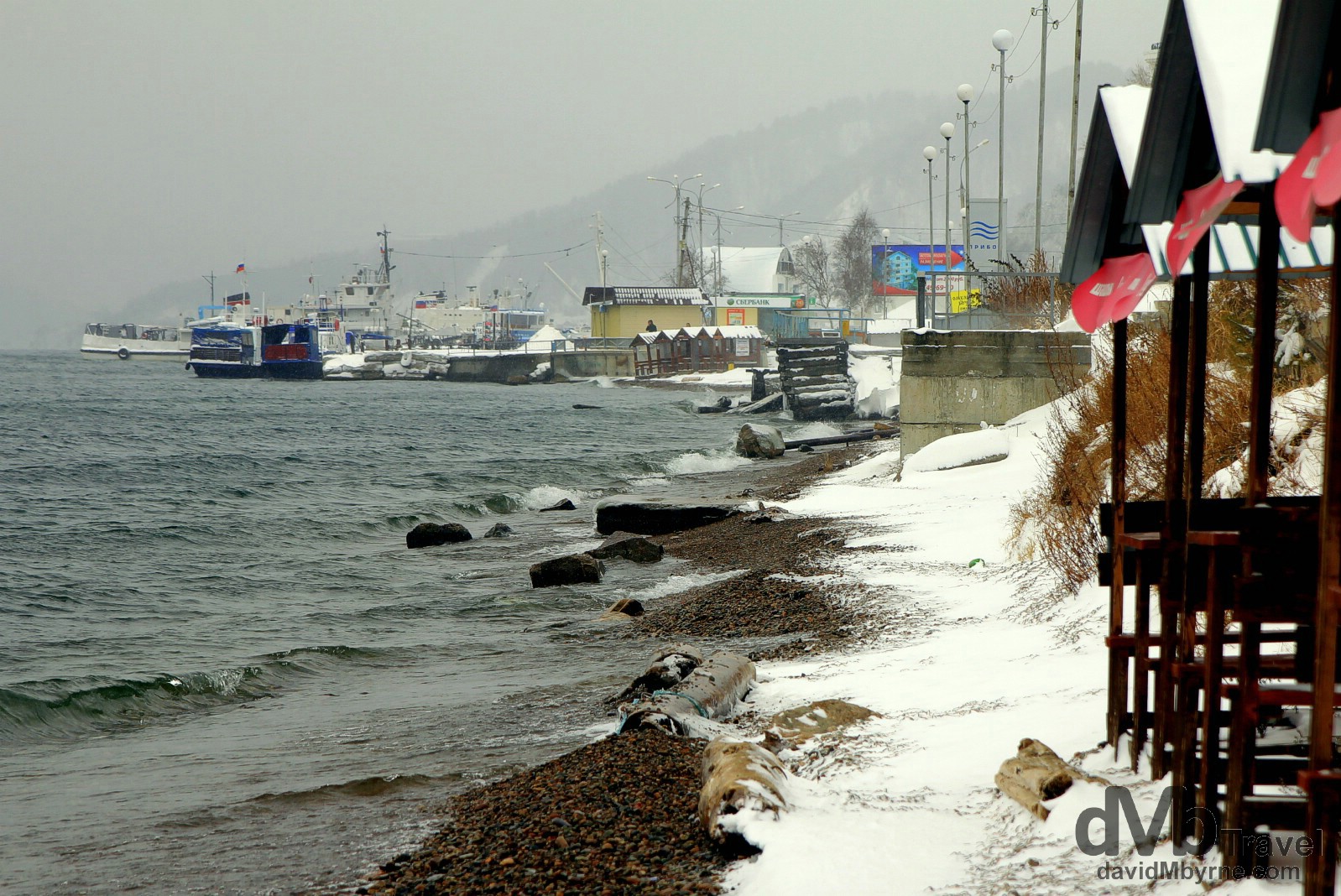 A wintry day on the shores of Lake Baikal from the village of Listvyanka, Irkutsk Oblat, Russia. The statistics on the lake are pretty impressive: it is the the oldest lake in the world (20-25 million years is the estimate); it’s the deepest lake in the world (1,637 metres at its deepest point); &, at 636 kilometres x 80 kilometres, it’s the largest freshwater lake in the world, holding one-fifth of the world’s total fresh water, more than all the Great Lakes of North America combined. Impressive indeed. Both the age & the isolation of this UNESCO World Heritage listed body of water have produced one of the world’s richest and most unusual freshwater faunas, which is of exceptional value to evolutionary science. Not much was known about the lake until the Trans-Siberian railway was built around its southern shores between 1896 and 1902. Now, however, it’s a popular stop for travellers en route, being only 1 hour by bus from the Trans-Siberian city of Irkutsk. Known as both the ‘Galapagos of Russia’ & ‘The Pearl of Siberia’, something it far from resembled today, the lake is a must-see attraction in this (still) remote part of the world, the influx of rail travellers aside, and even having seen it at its best (frozen) some 7 years ago I was still keen to see it again. Plenty of snow this time (both on the ground and falling from the sky) but unfortunately no big chunks of crystal-blue ice – the lake doesn’t freeze until December and remains that way until around April. The wintry shores of Lake Baikal in Listvyanka, Irkutsk Oblat, Russia. November 9th 2012

Baikal is not just a lake, but something greater and deeper. It is bottomless and majestic, but not an ocean or sea in which man loses all his visible bearings. There we sense the greatness of nature, feeling at one with it, not alienated from it, which is a rare phenomenon in developed countries. Baikal is a bridge to space. You must see Baikal to be able to say what it is like.