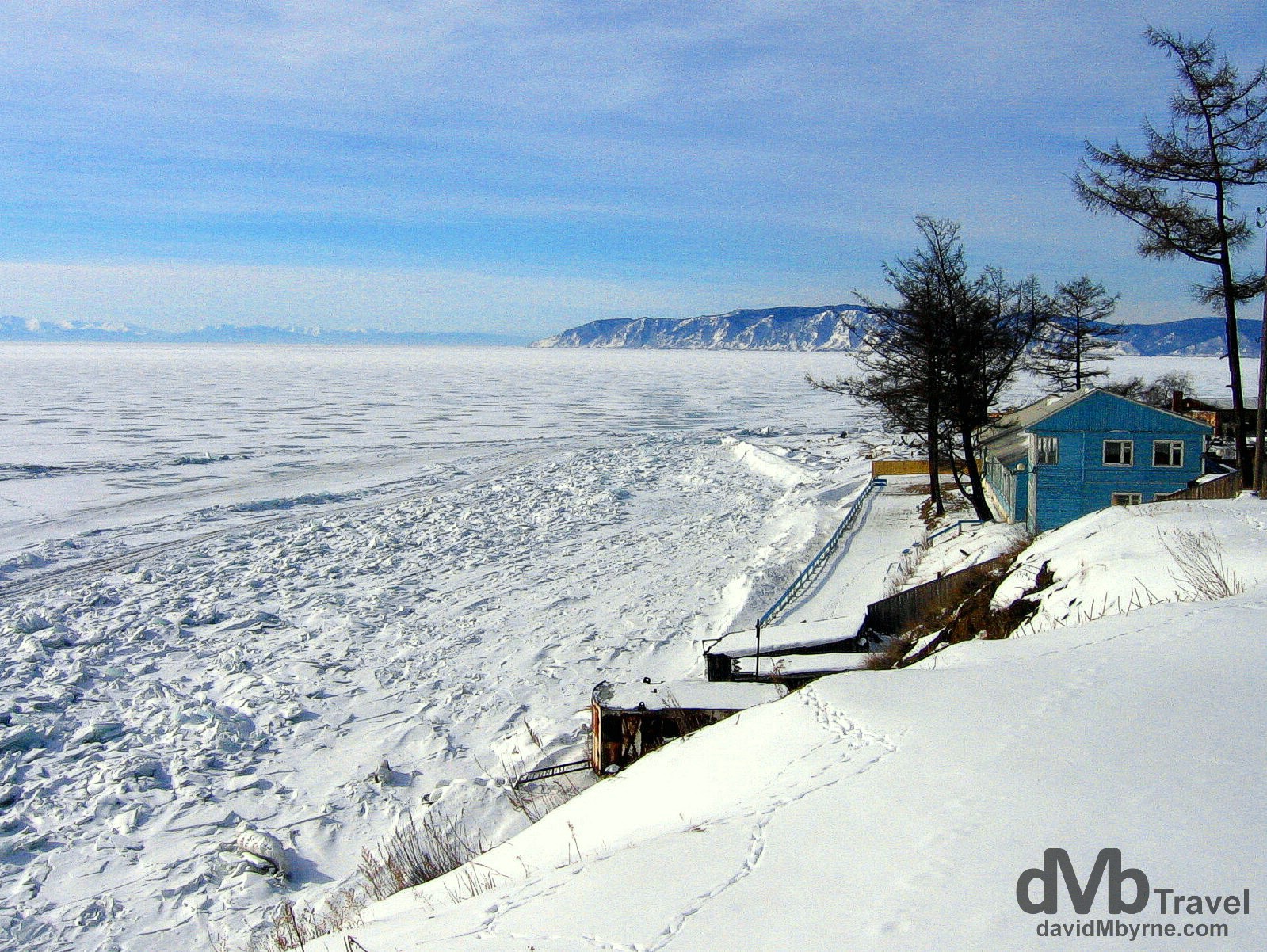 OK so, let’s get a few facts about UNESCO listed Lake Baikal, a 40-50 minute bus ride from Irkutsk, out of the way. For starters it straddles a continental rift (a crack in the earth’s skin) making it, at almost 1,700 metres, the deepest lake in the world. At a mere 636 kilometres x 80 kilometres, it’s also the largest fresh water lake in the world containing, as it does, over one-fifth of the world’s total fresh water, more than all the Great Lakes of North America combined. For good measure it’s also the world’s oldest lake. Yep, it’s been here for a not too shabby 25 million years. Finally, and due to its remoteness, 60% of the plant and animal species found at the lake are endemic to the area with the cute little Baikal Seal and omul fish, among others, found nowhere else in the world. Even for those like me who don’t get too overly excited by bodies of water that makes for impressive reading. Yes it’s just a lake, no matter how impressive the statistics, but to see it and the surrounding Siberian environment frozen like I did today was a magical winter wonderland experience.

Overlooking Lake Baikal from outside the nearby village of Listvyanka. Standing up here in the dead silence & peering out over the expanse of the frozen lake with only the sounds of the birds chirping in the Siberian woods behind me was an amazing experience. Lake Baikal, Siberian Russia. February 18, 2006.

Baikal is not just a lake, but something greater and deeper. It is bottomless and majestic, but not an ocean or sea in which man loses all his visible bearings. There we sense the greatness of nature, feeling at one with it, not alienated from it, which is a rare phenomenon in developed countries. Baikal is a bridge to space. You must see Baikal to be able to say what it is like. 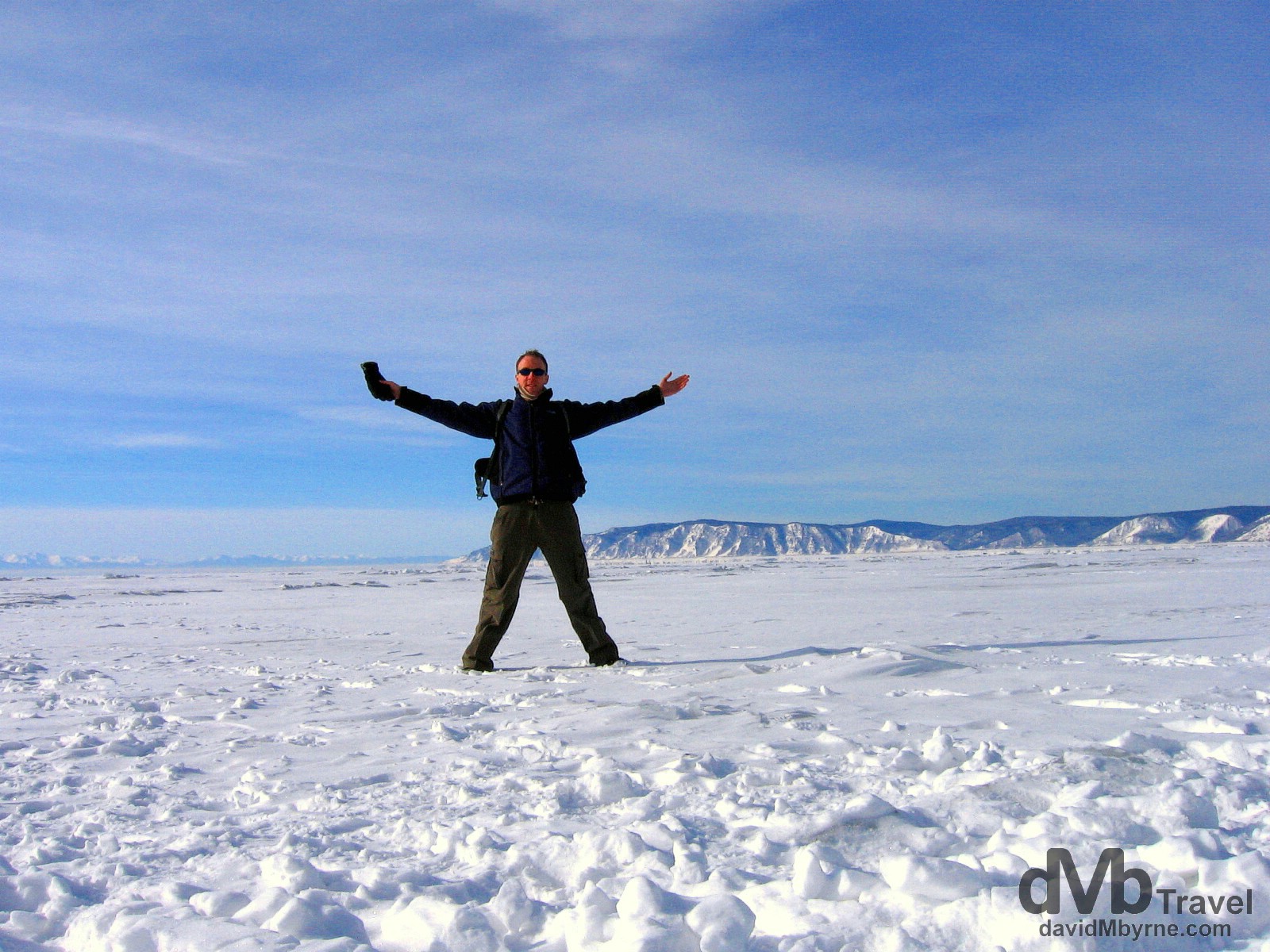 The age & the isolation of this UNESCO World Heritage listed body of water has produced one of the world’s richest and most unusual freshwater faunas, one that is of exceptional value to evolutionary science. This a delicate ecosystem recently came under threat from a Russian state company called Transneft. It wanted to build a trunk pipeline that would have come within 800 metres of the lake’s northern shore in a zone of substantial seismic activity. Fears were expressed about the possibility of an accidental oil spill that might cause significant damage to the environment so Russian president Vladimir Putin ordered the company to consider an alternative route to the north, to avoid such ecological risks. Lake Baikal, Siberian Russia. February 18, 2006.

Situated in south-east Siberia, the 3.15-million-ha Lake Baikal is the oldest (25 million years) and deepest (1,700 m) lake in the world. It contains 20% of the world’s total unfrozen freshwater reserve. Known as the ‘Galapagos of Russia’, its age and isolation have produced one of the world’s richest and most unusual freshwater faunas, which is of exceptional value to evolutionary science.

Not much was known about Lake Baikal, also known as The Pearl of Siberia, until the Trans-Siberian railway was built around its southern shores between 1896 and 1902. Now it’s a popular stop for travellers en route, a must-see attraction in this (still) remote part of the world, the influx of rail travellers aside. The main drop-off point for the buses from Irkutsk is the fishing village of Listvyanka. 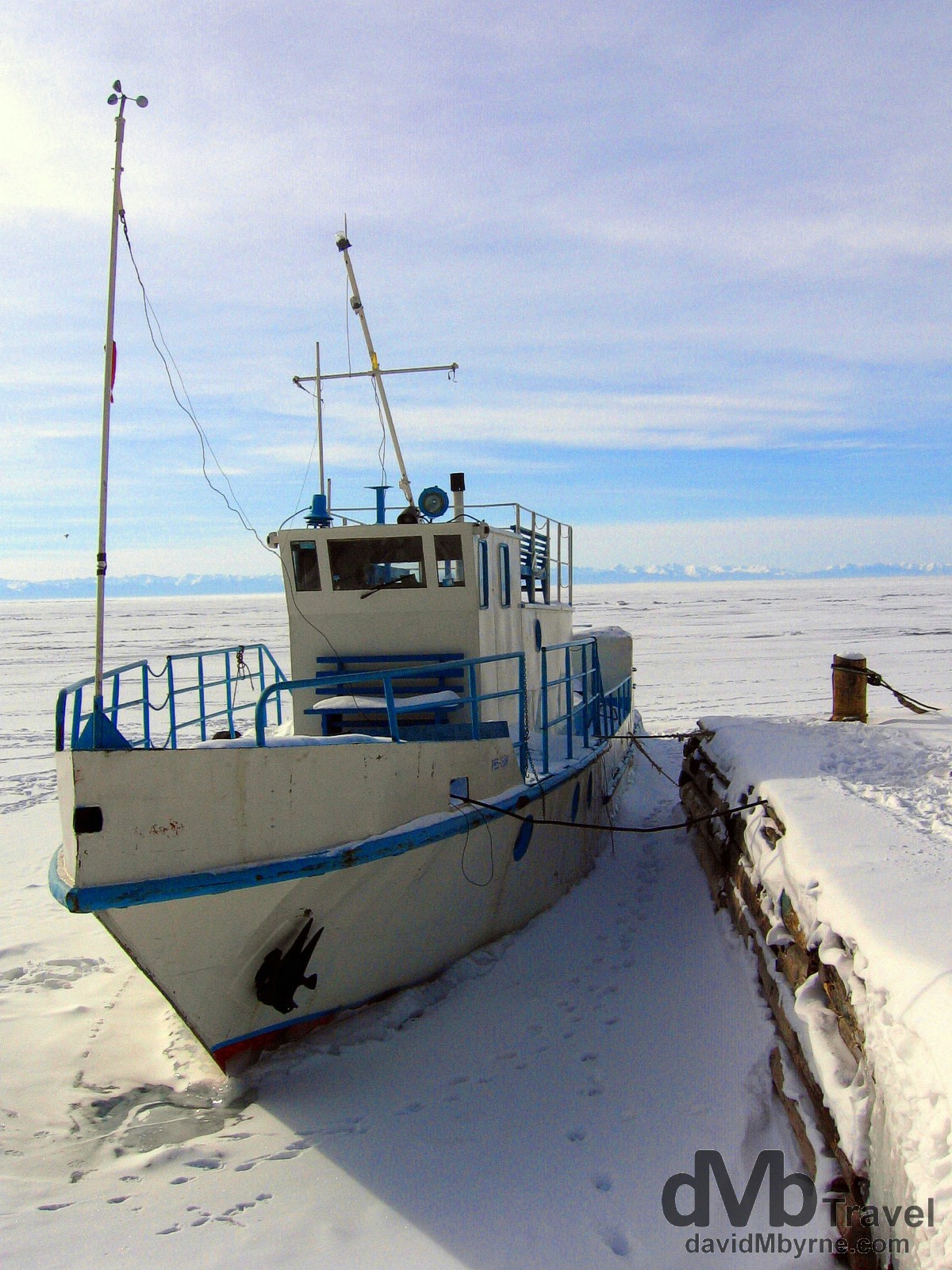 A boat waiting out the winter freeze in the fishing port of Listvyanka on the shores of Lake Baikal. Listvyanka, Siberian Russia. February 18, 2006.

Listvyanka & Omul
Despite its modest size, Listvyanka is one of the busiest tourist spots in the whole of Siberia – it sees probably more visitors than all other towns and villages on the lake combined. It has picnic areas, a few hotels & cafes &, once a week, a tourist-oriented market with numerous stalls and smoked omul sellers. 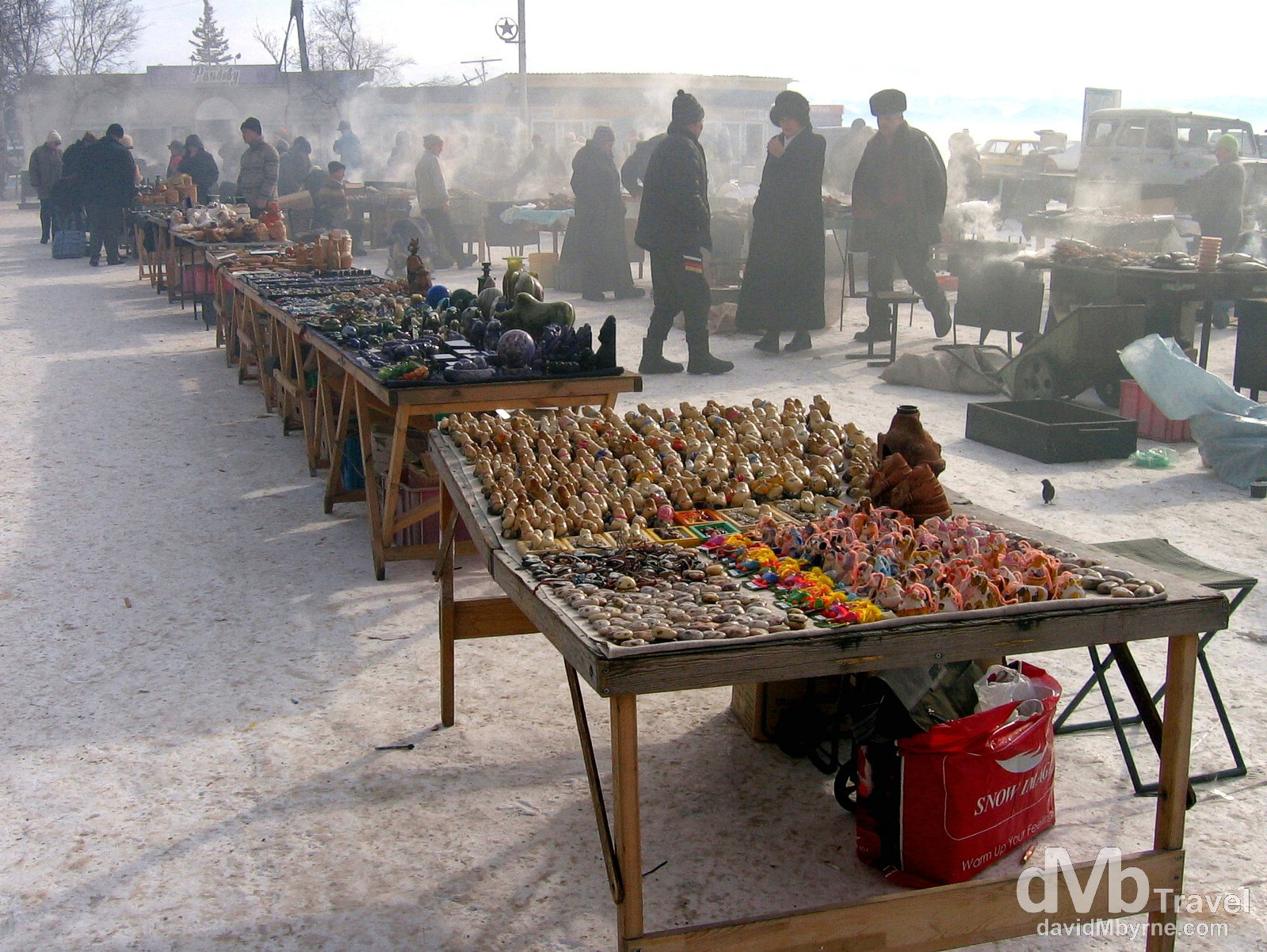 Market day in the village of Listvyanka on the shores of Lake Baikal. The smoke seen here is from the abundant smoked omul sellers. I walked through the market a few times, purchasing a little memento/souvenir to remind me of my visit, something the smell of the smoked Omul lingering on my clothing will be a remind me of for a few days to come. Listvyanka, Siberian Russia. February 18, 2006. 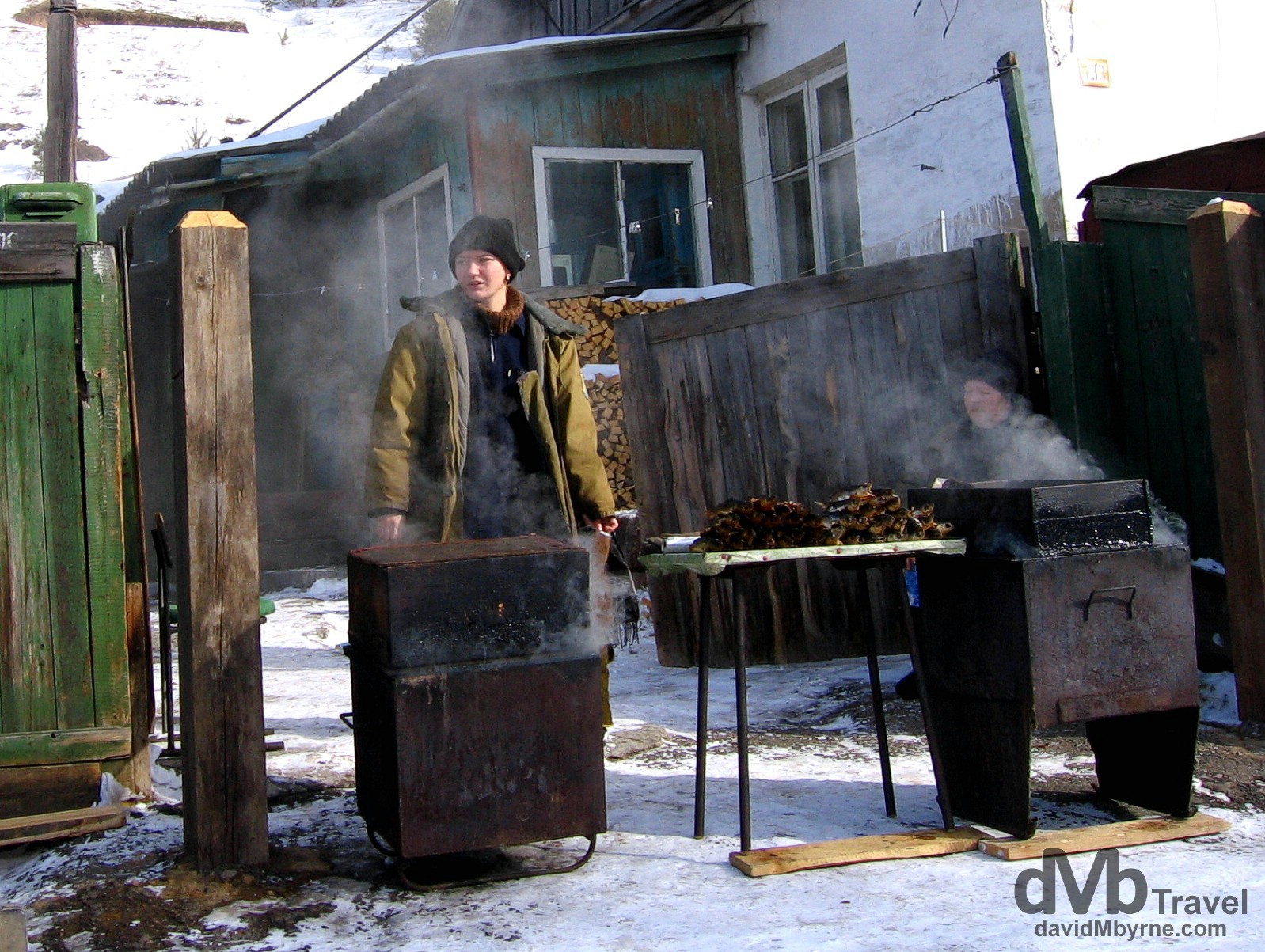 Omul is a salmon-like fish endemic to Lake Baikal and considered a delicacy in the area. I sampled it last night in Kafe Na Dnye in Irkutsk but, and while nice, it was pale by comparison to the warm, flaky omul purchased here in Listvyanka on the shores of Lake Baikal. Siberian Russia. February 18, 2006. 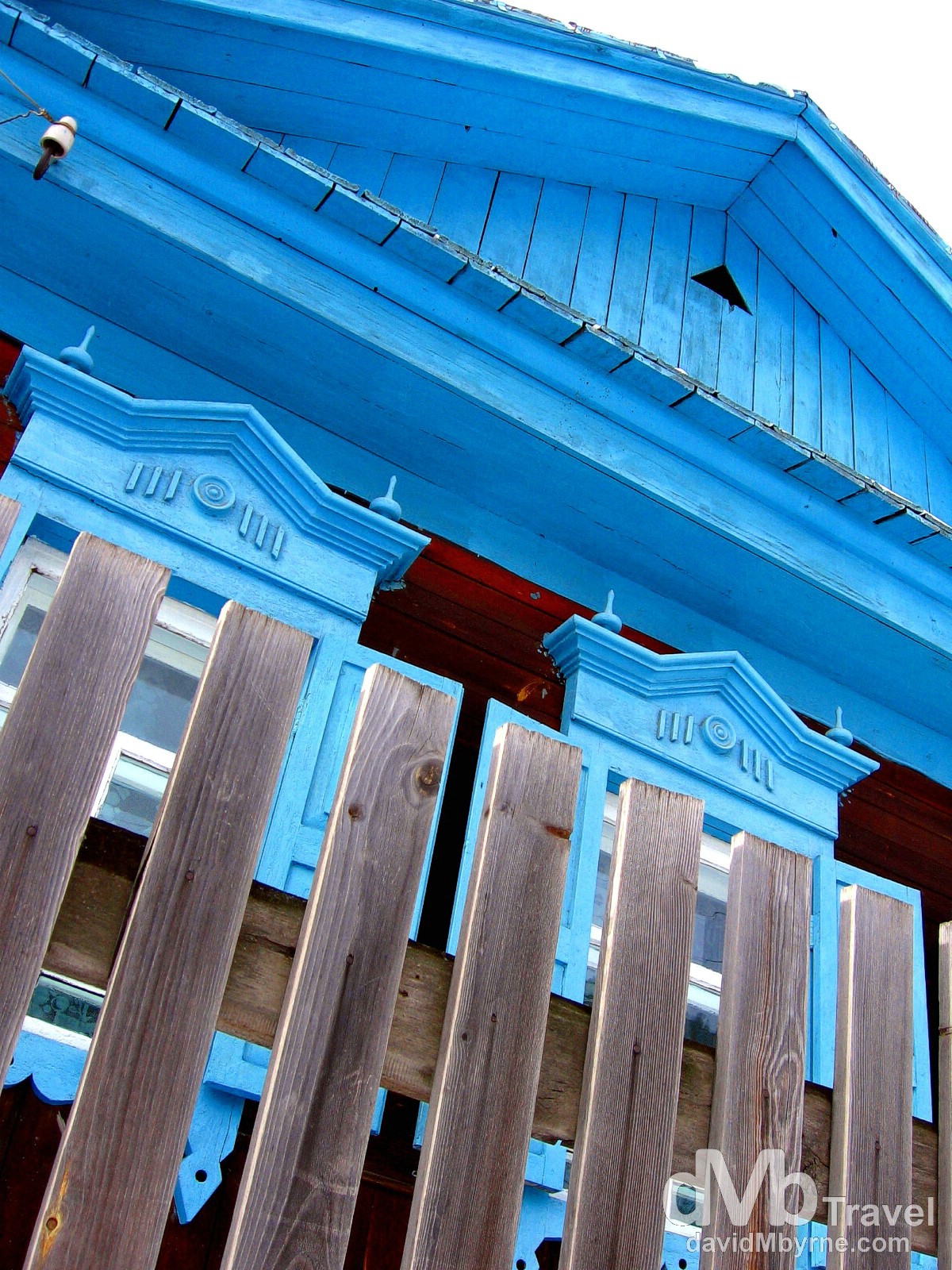 The blue facade of one of the nicer wooden building in the hills above the village of Listvyanka, Siberian Russia. February 18, 2006. 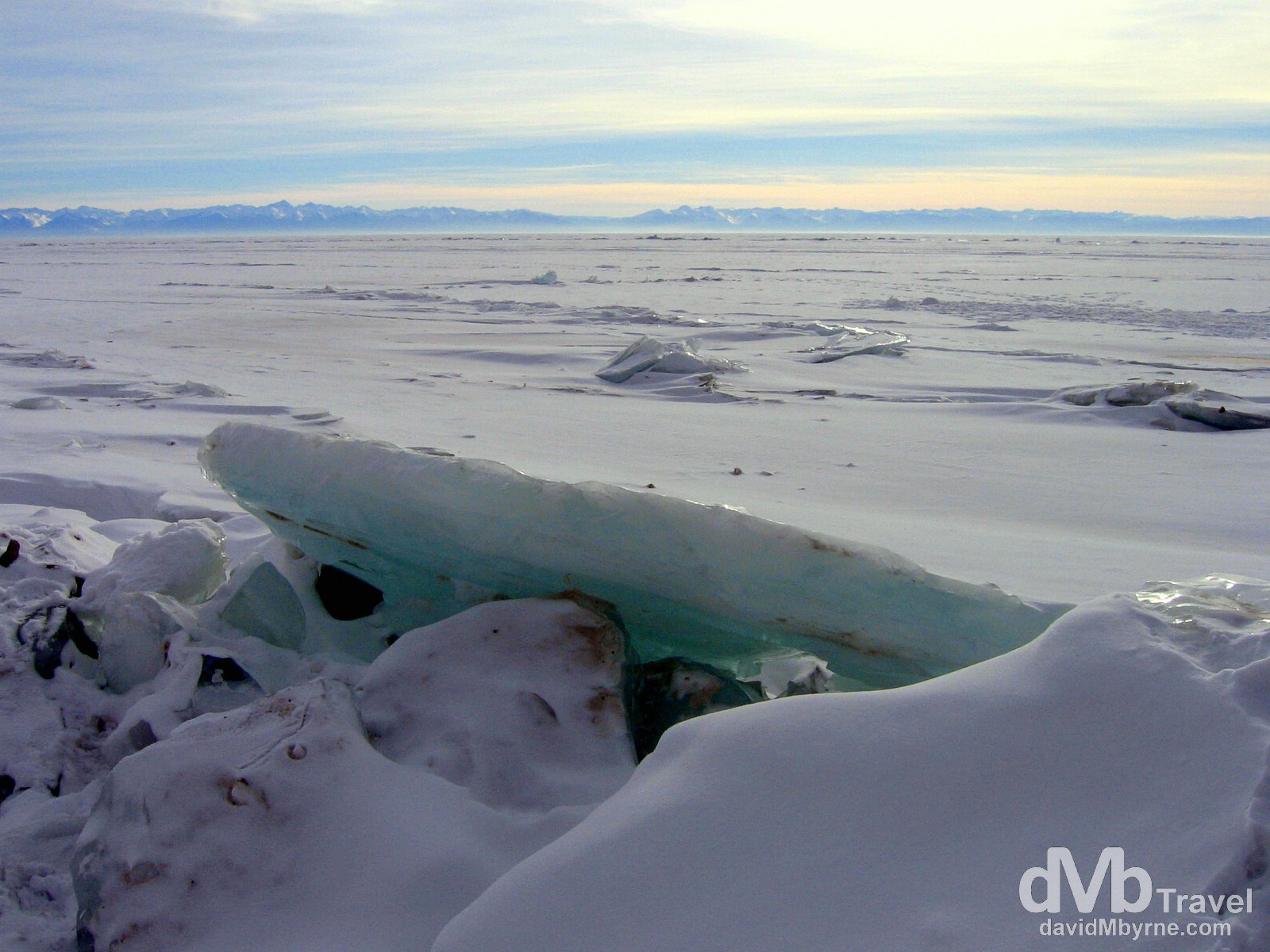 Huge chunks of crystal blue ice protruding from the surface of a frozen Lake Baikal in Siberian Russia. February 18, 2006.