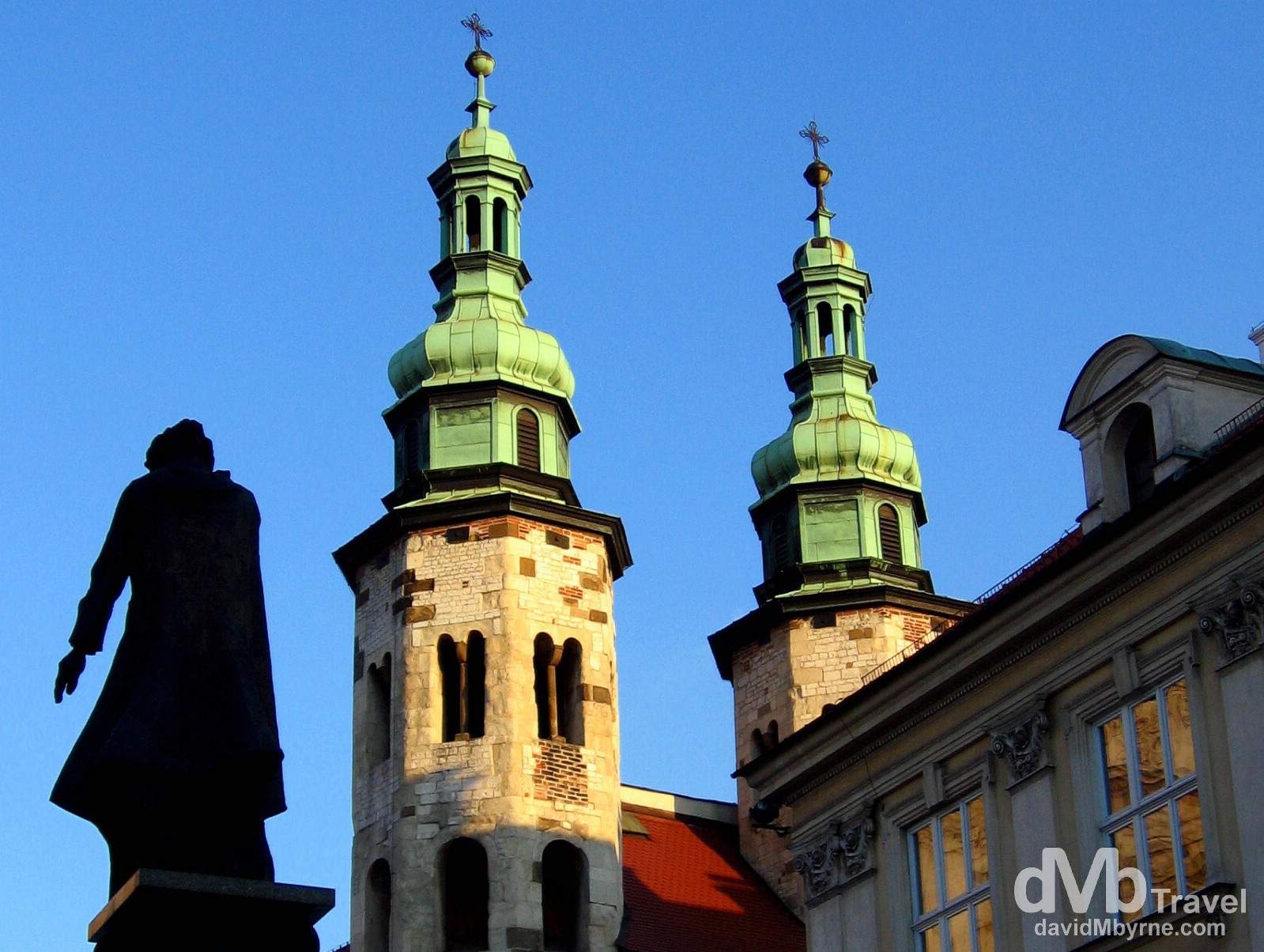 Kraków is Poland’s most cosmopolitan and best preserved city. It survived World War II unscathed, which is miraculous considering the destruction that befell the rest of Poland. The city boasts a wealth of churches, baroque architecture and of course a medieval Old Town (what city of any size in this part of the world doesn’t?). It also boasts Poland’s biggest tourist attraction, Wawel Castle & Cathedral. The city was founded in the 7th century by Prince Krak who, according to legend, secured its prime location overlooking the Vistula River after outwitting the resident dragon. The city flourished as the medieval capital of Poland with a string of kings ruling from the aforementioned castle. All this changed in 1596 when the capital was moved to Warsaw – but even after this Polish royalty continued to be crowned and buried at Wawel Cathedral, such was/is its national importance. 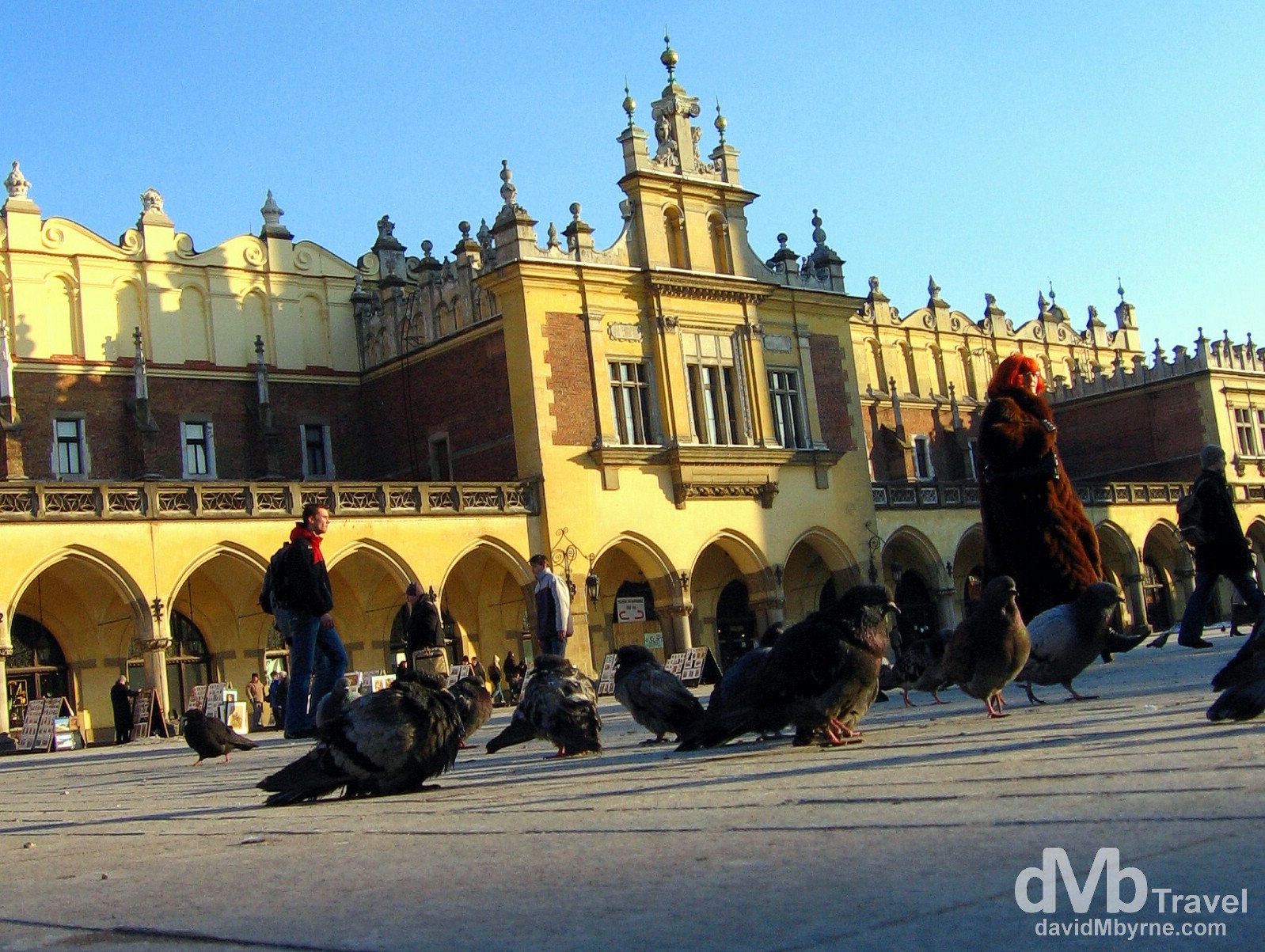 I had a long day yesterday looking around the historic, UNESCO listed centre of Kraków having arrived in the city off the bus from Warsaw at the ungodly time of 4:15 a.m. That gave me more than enough time walk through the Florian Gate of the city’s Old Town walls before passing down Florianska, a.k.a. Royal Way, to Rynek Glowny (Market Square), only Europe’s largest market square. From there I continued south on Grodzka, passing some nice churches (the Franciscan Church, Saints Peter & Paul Church, & Saint Andrew’s Church to name but a few) before getting to Wawel Hill, the hill crowned by Wawel Castle & Wawel Cathedral, both iconic symbols of Poland. Continuing further south, I paid a visit to Kazimierz, the Jewish sector of the city & somewhere that was recently brought to the world’s attention thanks to the movie Schindler’s List which portrayed the story of the 65,000 World War II Kraków Jews. Old Town walls & battlements, Europe’s largest market square, myriad churches & an iconic castle. Par for the course in the gorgeous, UNESCO listed centre of historic Kraków. 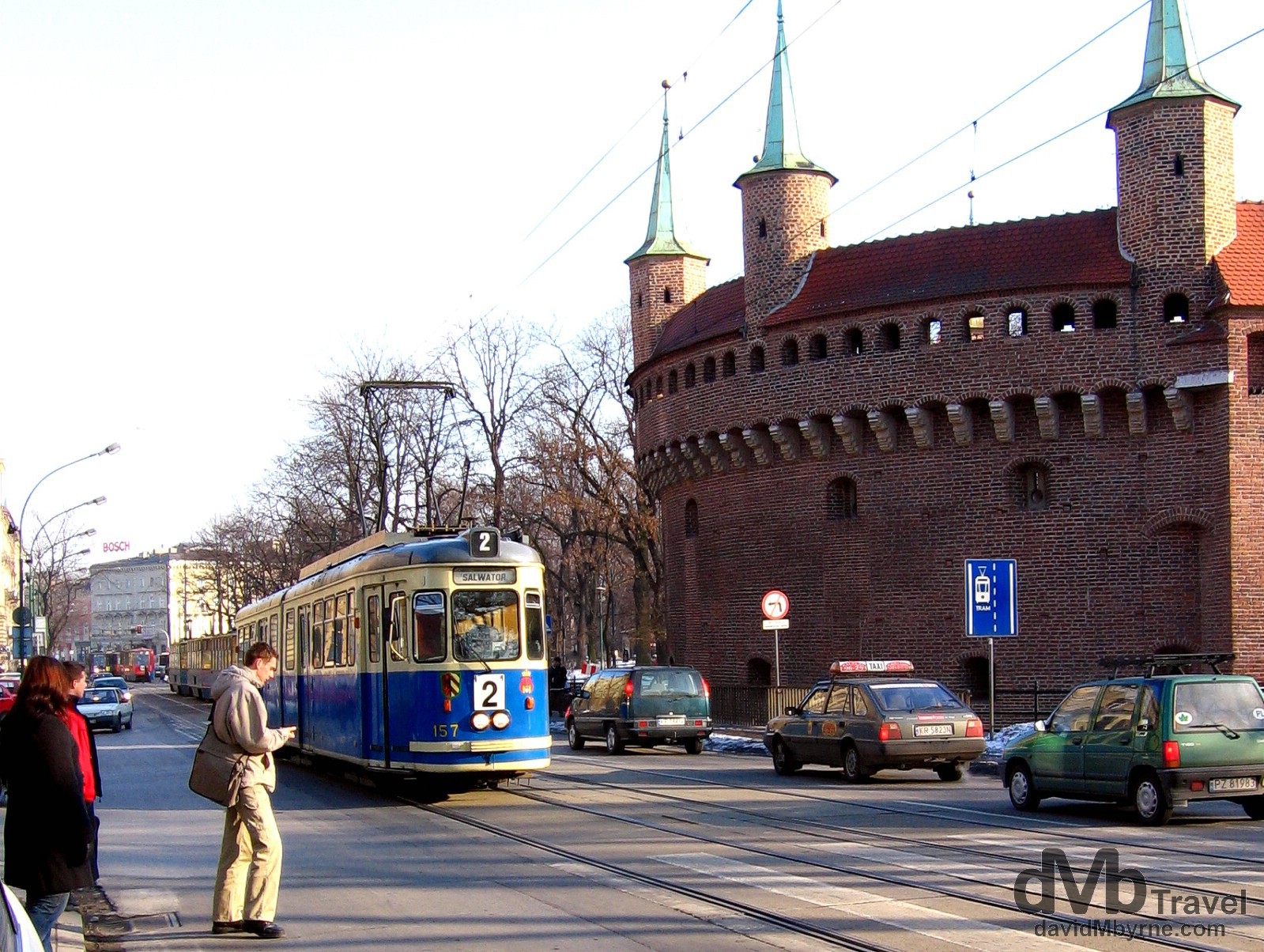 A tram on the streets of Kraków outside the circular Barbican, a defensive bastion built in 1498 as an outer defense to the city. By 1500 Krakow was not only one of the richest cities in Europe but also one of the best fortified. The Old Town was ringed by 2 great walls punctuated by towers and encircled by 2 moats. The outer wall was pierced by two barbicans, one of which, a splendid edifice, is seen here. The city was smaller then as it is now and today the Barbican marks the northern boundary of Kraków’s UNESCO listed Old Town. Basztowa, Kraków, Poland. March 6, 2006.

The historic centre of Cracow, the former capital of Poland, is situated at the foot of the Royal Wawel Castle. The 13th-century merchants’ town has Europe’s largest market square and numerous historical houses, palaces and churches with their magnificent interiors. Further evidence of the town’s fascinating history is provided by the remnants of the 14th-century fortifications and the medieval site of Kazimierz with its ancient synagogues in the southern part of town, Jagellonian University and the Gothic cathedral where the kings of Poland were buried.

– UNESCO commenting on The Historic Centre of Kraków 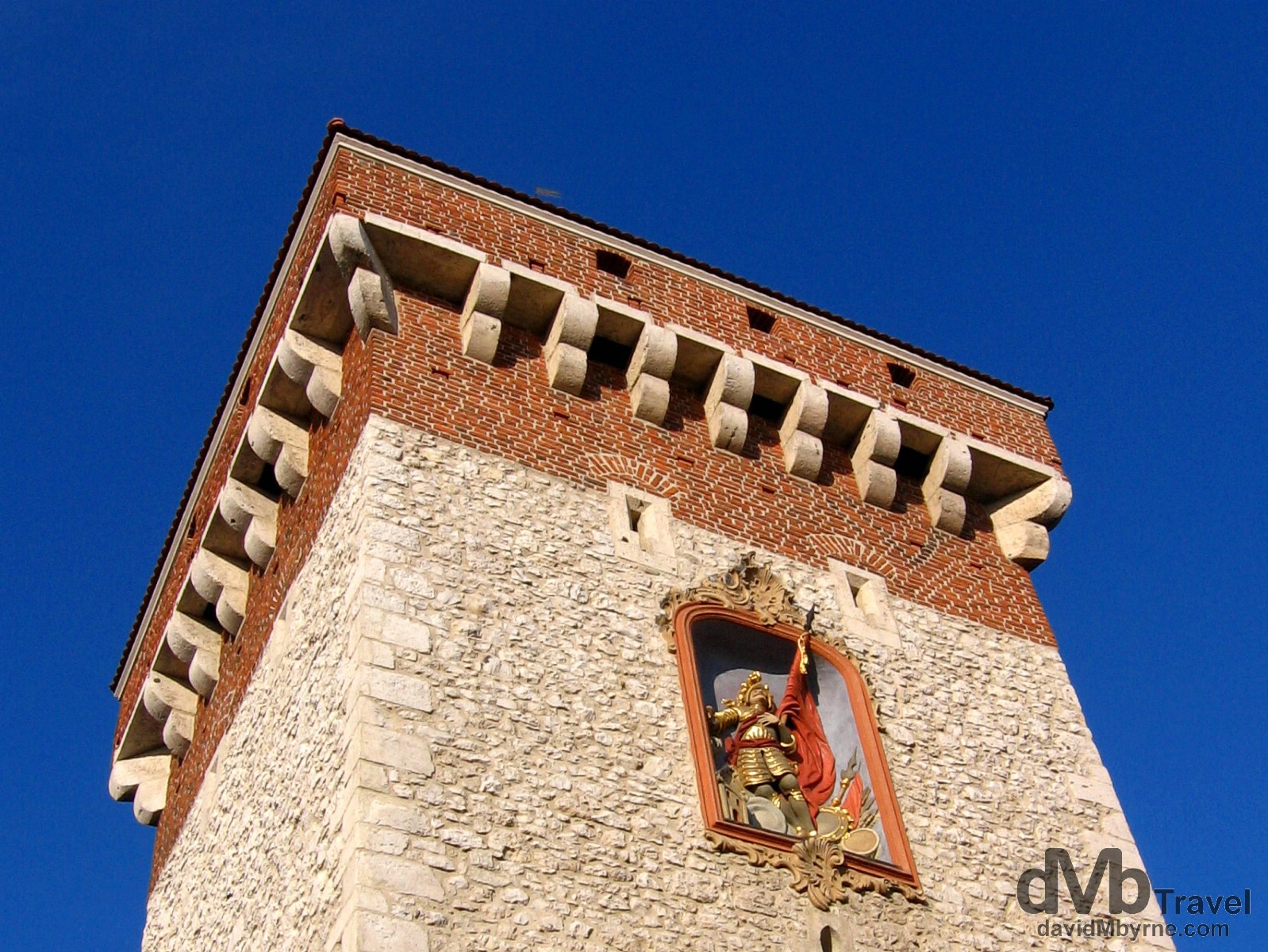 One has to pass through this impressive structure, the Florian Gate in the northern wall of Kraków’s Old Town walls, to enter the Old Town proper. This is the only survivor of the original 8 gate towers that once circled the Old Town of Kraków and considering the this-had-to-have-been-built-only-yesterday appearance of the Florian Gate one can only wonder as to what happened the other 7 gates. This gateway does today, & as it did in the past, marks the historic entrance to the city & the starting point for Florianska, or Royal Way, which leads down to Rynek Glowny (Market Square). It’s a route royal processions would have used in ancient times. Old Town, Kraków, Poland. March 6, 2006.

One of the first sights you see when approaching Old Town Kraków’s Rynek Glowny (Market Square) when sauntering down Florianska (Royal Way) is the towering red brick hulk of the 14th century Gothic Saint Mary’s Basilica standing at the square’s northeastern corner. It’s not a particularly attractive building but it’s sheer size makes it unmissable. As impressive as its presence is from the outside, the church is more famous for its interior, especially its wooden altarpiece that was carved by Veit Stoss, a leading German sculptor of the day. Every hour a trumpet signal, called a hejnal, is played from the top of the taller of the two towers, the left tower as seen in this picture. The plaintive tune breaks off in mid-stream to commemorate the famous 13th century trumpeter who was shot in the throat while sounding the alarm before a Mongol attack on the city. The noon-time hejnal is heard across Poland, broadcast live by a Polish national radio station. Saint Mary’s Basilica, Old Town, Kraków. Poland. March 6, 2006. 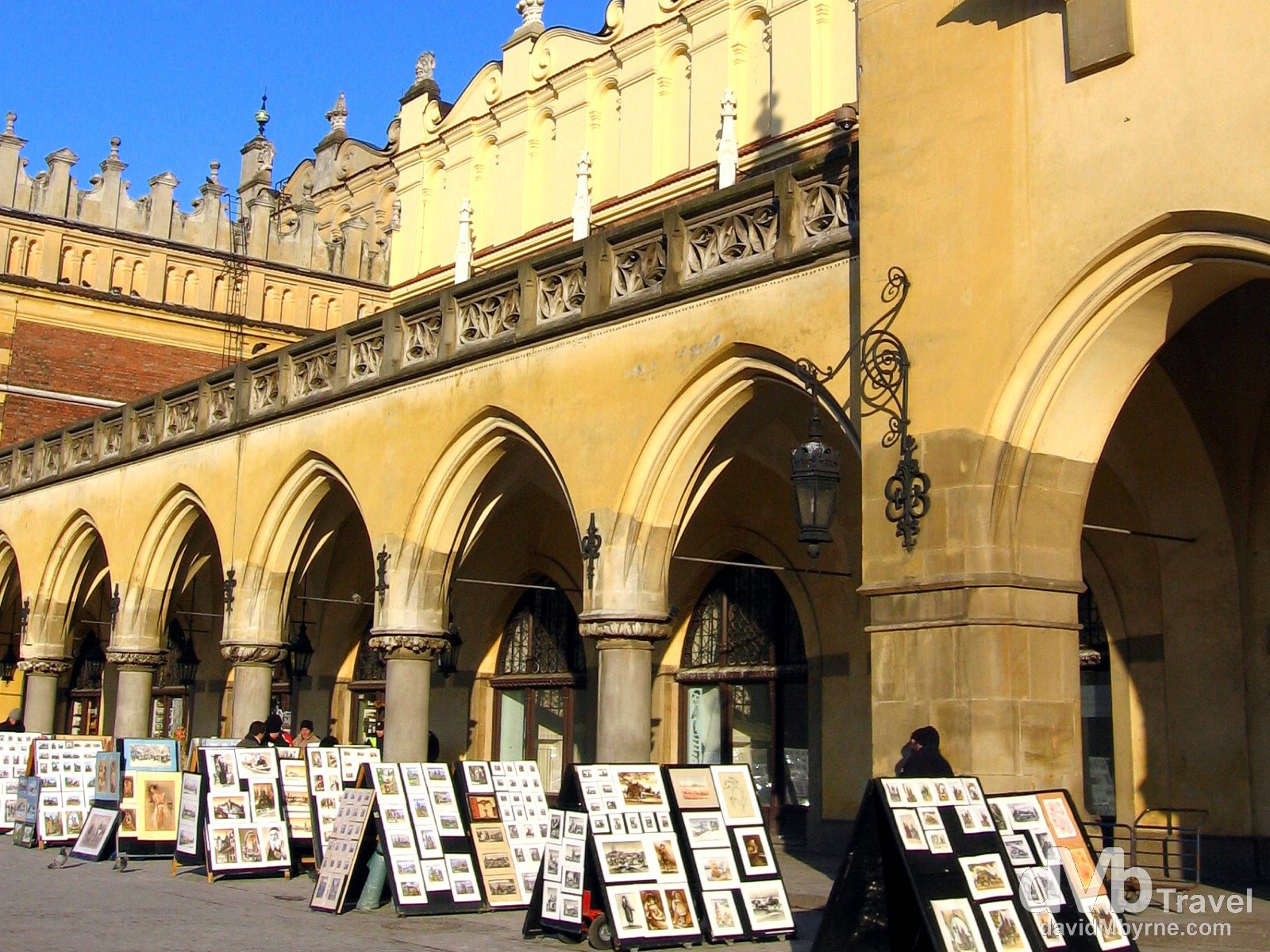 Although it didn’t look all that big to me, Rynek Glowny (Market Square) in Kraków’s Old Town is, at approximately 40,000 m², the largest market square in Europe. Laid out in 1257 after the Mongol hordes swept through the city, the square has hosted some of the great dramas of Poland’s history & it remains one of the most vibrant and inspiring places in the country. The huge pastel yellow Renaissance Cloth Hall, seen here, sits right in the middle of the square, detracting somewhat from the square’s size. The hall, as its name suggests, was once a main focus of Kraków’s cloth trade. It looked stunning in the late afternoon light and I spent quite a while photographing it from various angles. On the ground floor of the hall there are plenty of run-of-the-mill tourist shops selling all things Polish (no doubt the majority of which are made in China) and the upper floors house a museum & various art galleries which, as seen here, spill out onto the square itself. Cloth Hall in Rynek Glowny (Market Square), Old Town, Kraków, Poland. March 6, 2006. 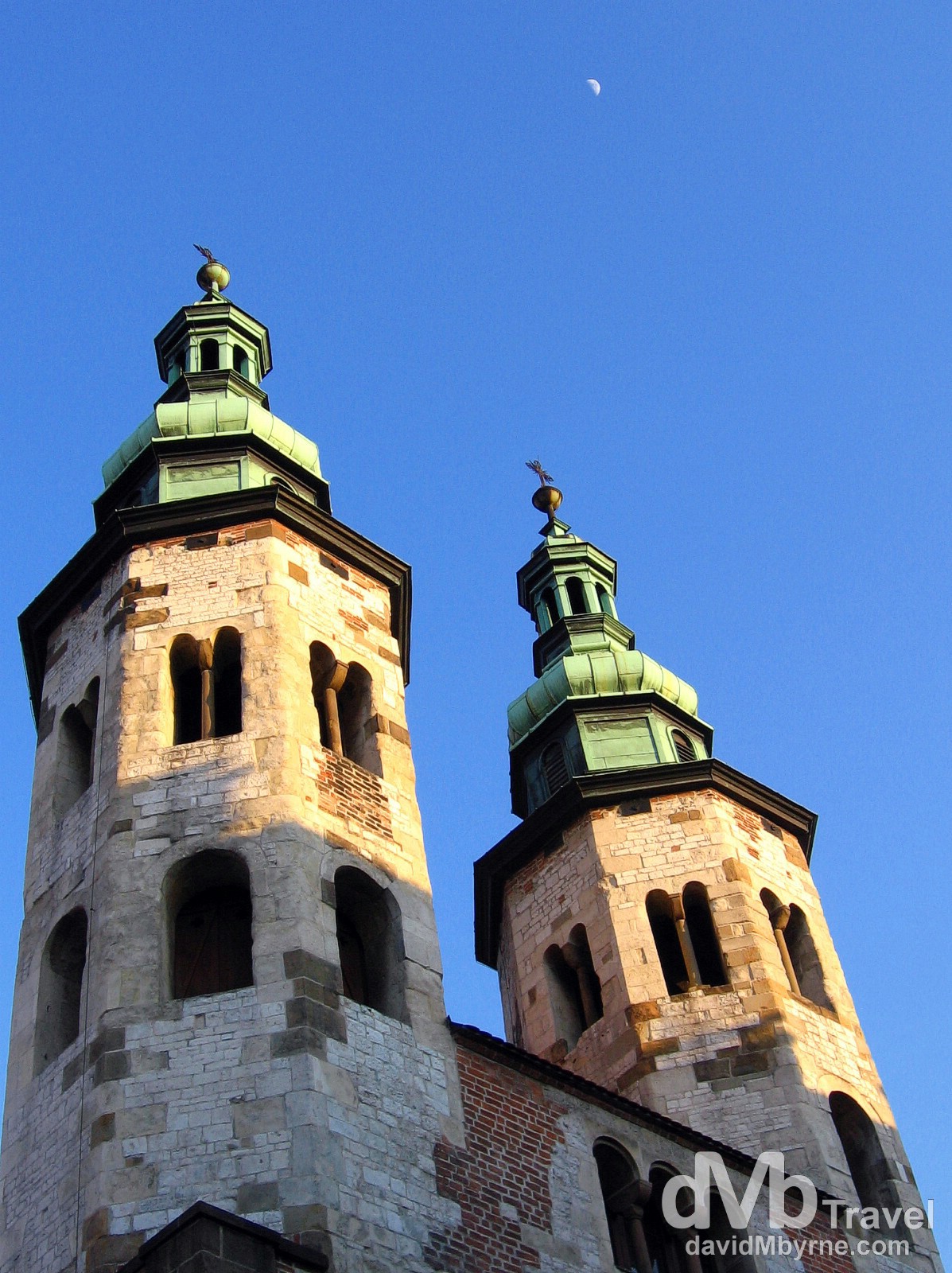 Passing down Grodzka from Rynek Glowny (Market Square) brings you past Saint Andrew’s Church, just one of many Kraków houses of prayer. Built between 1079 & 1098 in the Romanesque style, it is one of the oldest buildings in the city and it was the only building in Kraków to withstand the Tatar’s attack of 1241. This was just one of the many buildings in the city that hides its age well – it doesn’t look anywhere near the 900-year-old structure it actually is. Crodzka, Old Town, Kraków, Poland. March 6, 2006.

Another shot of the twin towers of Saint Andrew’s Church in the Old Town of Kraków, Poland. March 6, 2006. 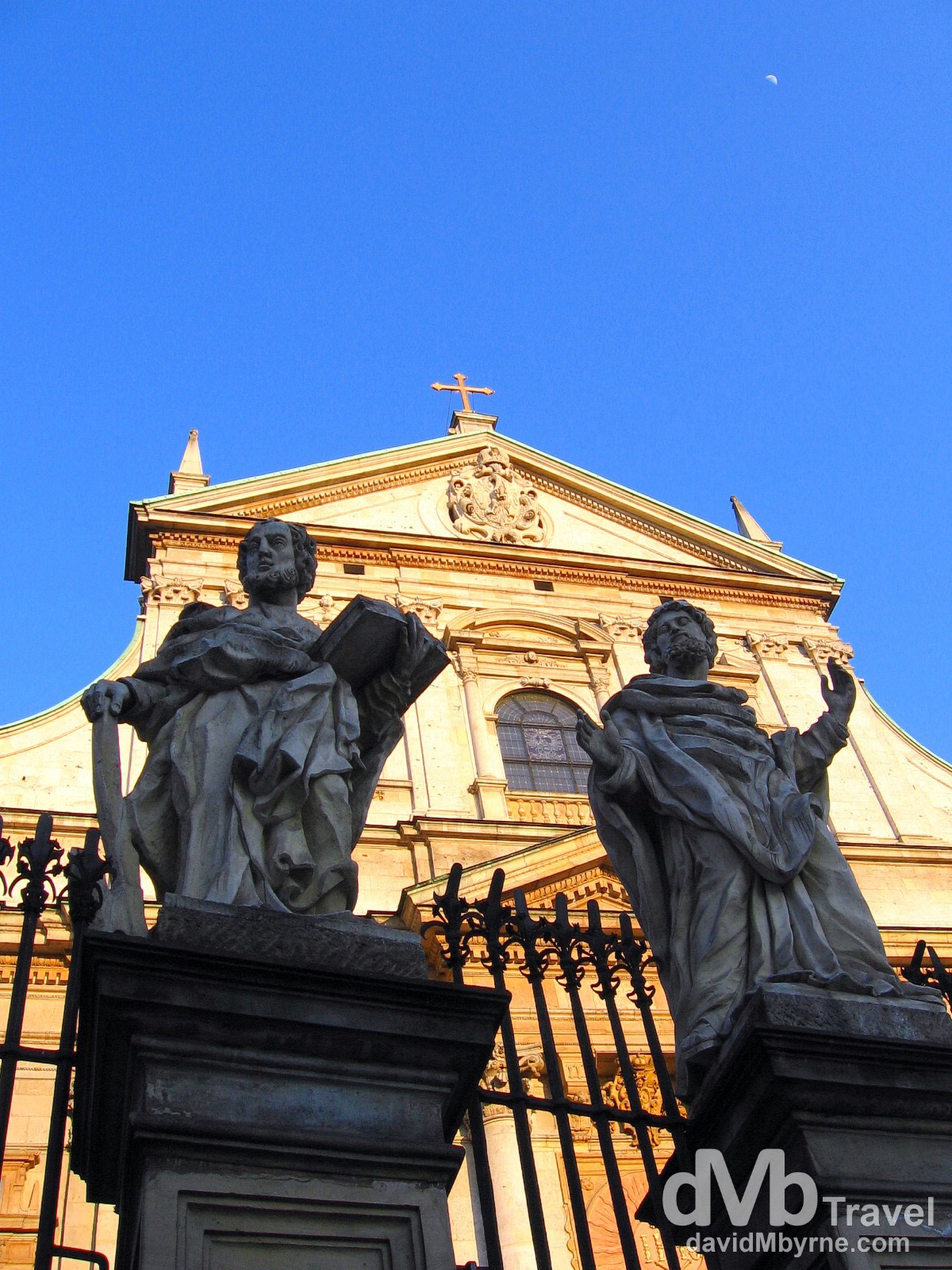 One more church, this one the Saints Peter & Paul Church, Kraków’s premier Jesuit church. Built in the early 1600s, is was the first Baroque church to be built in Poland. Its most striking feature is its amazing facade & the statues of the twelve disciples standing on the gates outside, 2 of which are shown in this picture. Again the facade looked amazing bathed in the late afternoon light and set against the blue sky. Crodzka, Old Town, Kraków, Poland. March 6, 2006.