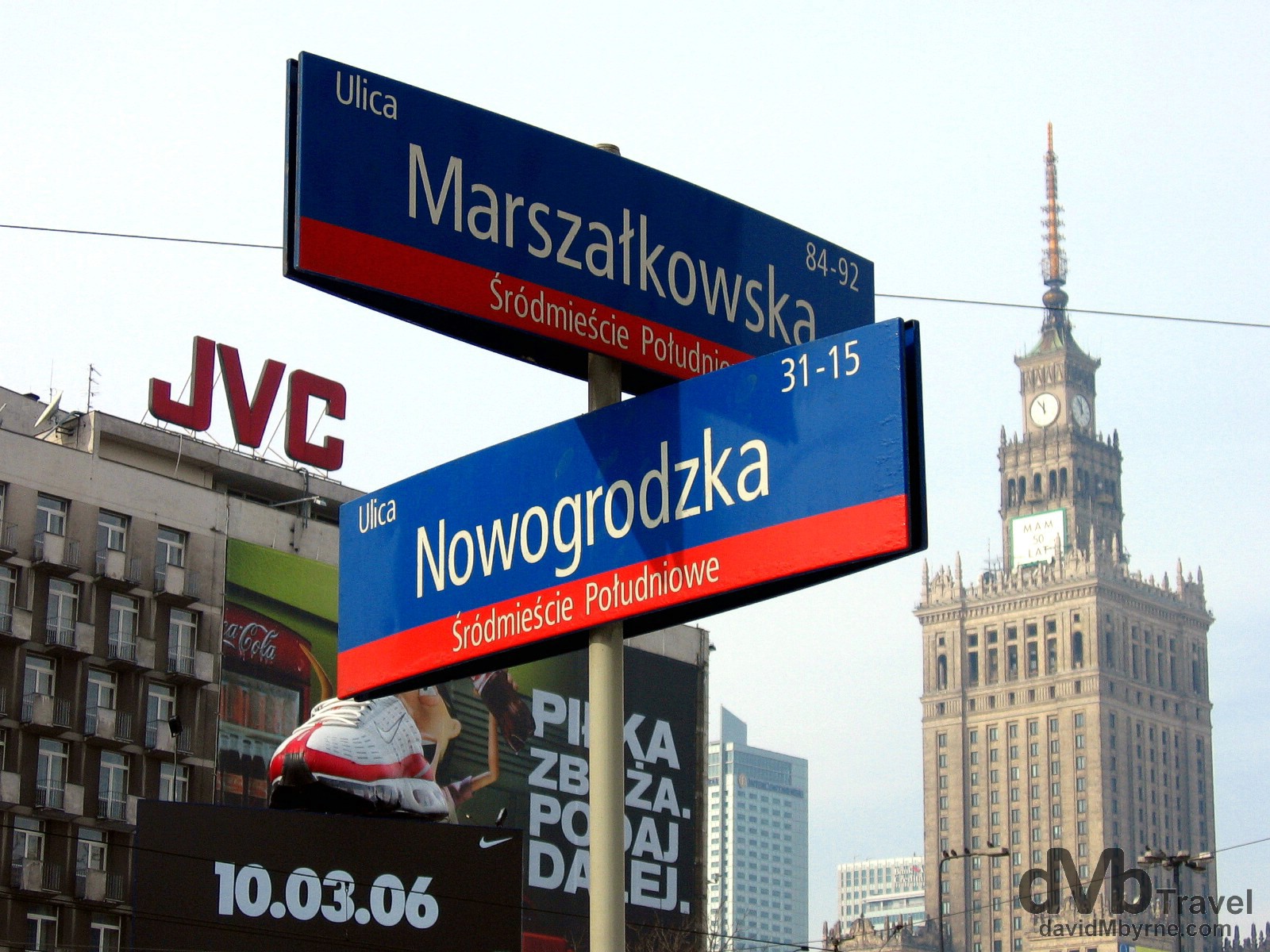 Arriving this morning in Warsaw, the capital of Poland, off the overnight bus from Vilnius in Lithuania was interesting. It was 7 a.m. and still pitch dark in the shady area of the city’s outskirts I found myself. Nowhere seemed open, only the bus station’s smoky basement cafe where I got breakfast. It seemed to double as a bar – even at that hour of the day there were more patrons/revelers drinking than there were eating. Soon thereafter I was getting acquainted with Warsaw, the phoenix city. I found myself walking down a long, long street called Jerozolimskie (it seemed to go on forever) which brought me past the mammoth Palace of Culture and Science to Centrum Metro Station. I then continued up Nowy Swiat and Krakowskie Przedmiescie which, after stops outside the Chopin Museum, the Church of the Holy Cross & the Tomb of the Unknown Soldier in Saxon Gardens, brought me to Warsaw’s premier attraction, Plac Zamkowy (Castle Square) and the entrance to the city’s marvelous Old Town, which is actually quite new. It was here I got acquainted with some medieval artists and reacquainted with picturesque public squares, pastel buildings and church spires, the usual Eastern European Old Town staples. Oh how blasé one can become when one explores historic Old Towns day after day – today was UNESCO listed Old Town number 4 in as many days following visits to the three Baltic State capitals of Tallin, Riga & Vilnius prior to arrival in Warsaw.

Having walked from the bus station toward Warsaw’s Old Town, I eventually came to the iconic city landmark that is the monstrous Palace of Culture & Science, the towering pile of concrete seen in the background. As a structure it’s not hard to miss; it’s Warsaw’s tallest building and is visible from all over the city. Built in the 1950s, it was a ‘gift of friendship’ from the Soviets to the Polish nation, reward for enduring centuries of invasions, occupation & oppression. The Palace houses all sorts of things including an ultra-expensive viewing gallery, congress halls, theatres and a cinema. Indeed, while passing time earlier this evening waiting on the bus to Krakow I saw the movie Syrania here. It, the movie, is almost as confusing as the building itself. Street signage & the massive tower of the Palace of Culture & Science building as seen from outside Centrum Metro Station in Warsaw ( 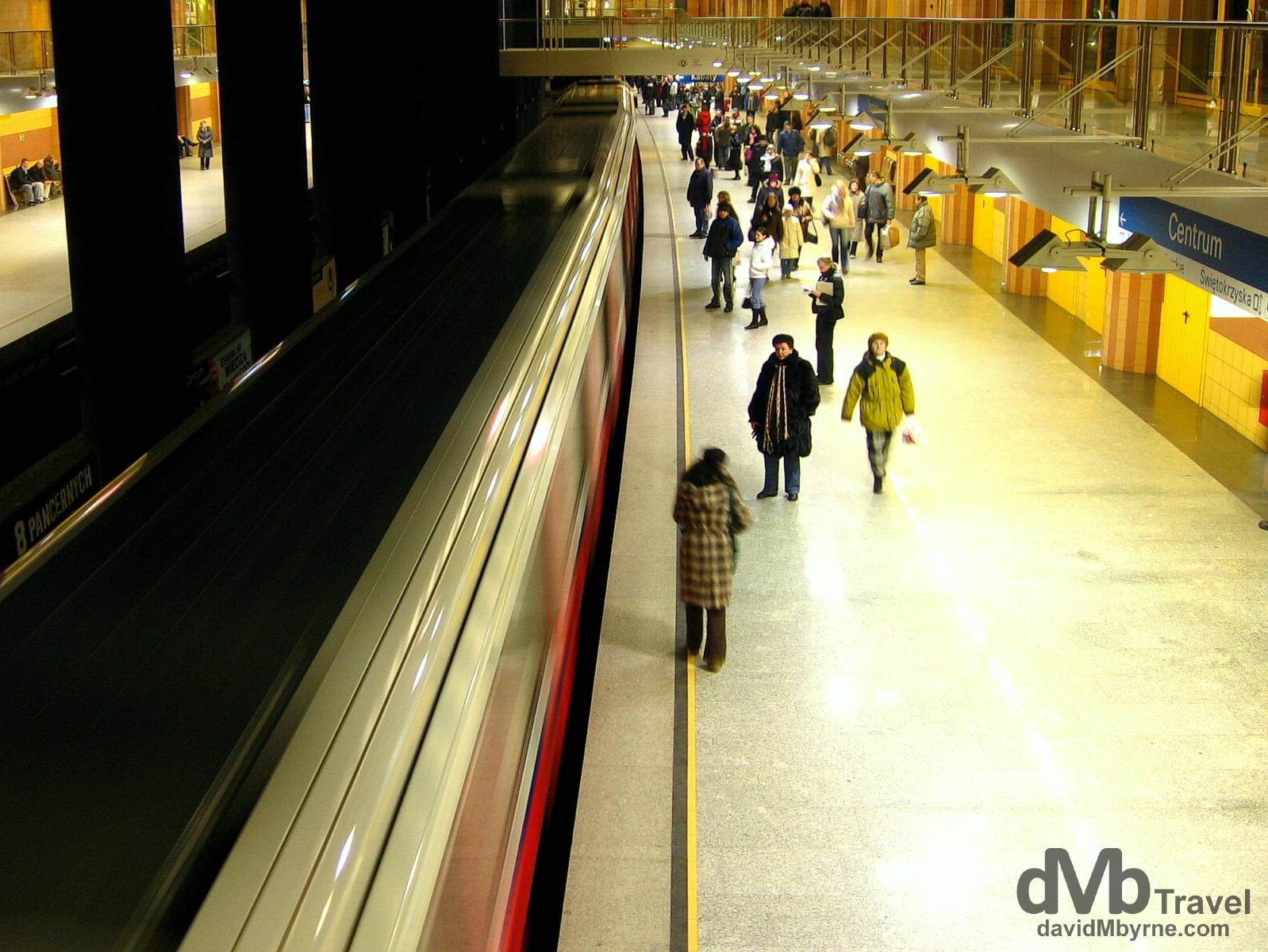 A picture of activity on the platform of Warsaw’s Centrum Metro Station. The metro system in Warsaw is the 1st of its kind in the country and is one of Europe’s newest metro systems. It was opened in 1995 and so far consists of a single north-south line making it of little use to visitors like me. Plans are afoot for further line expansions which will, no doubt, be wholly or partly funded by the EU, membership of which Poland gained in May 2004. Warsaw, Poland. March 5, 2006. 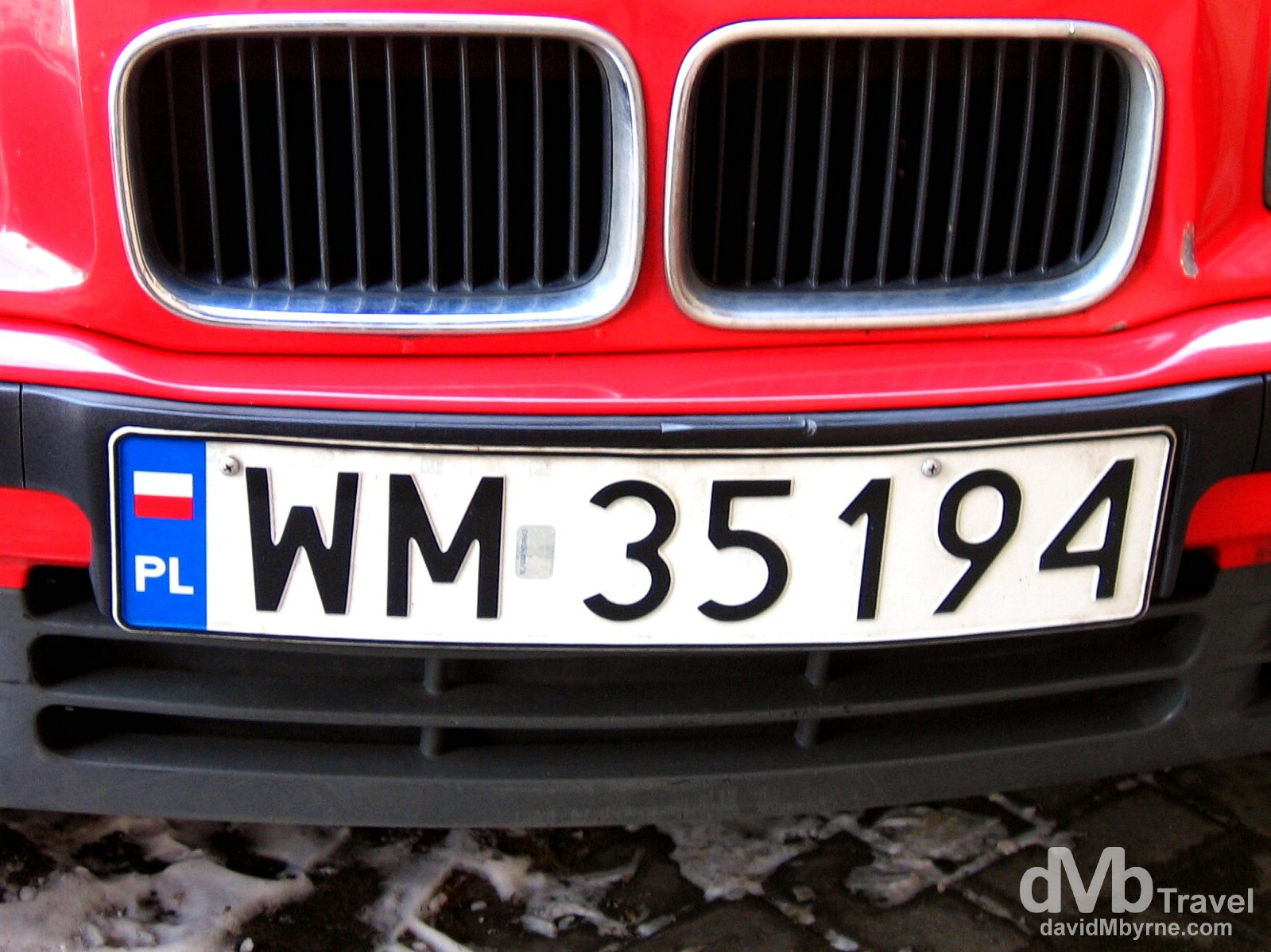 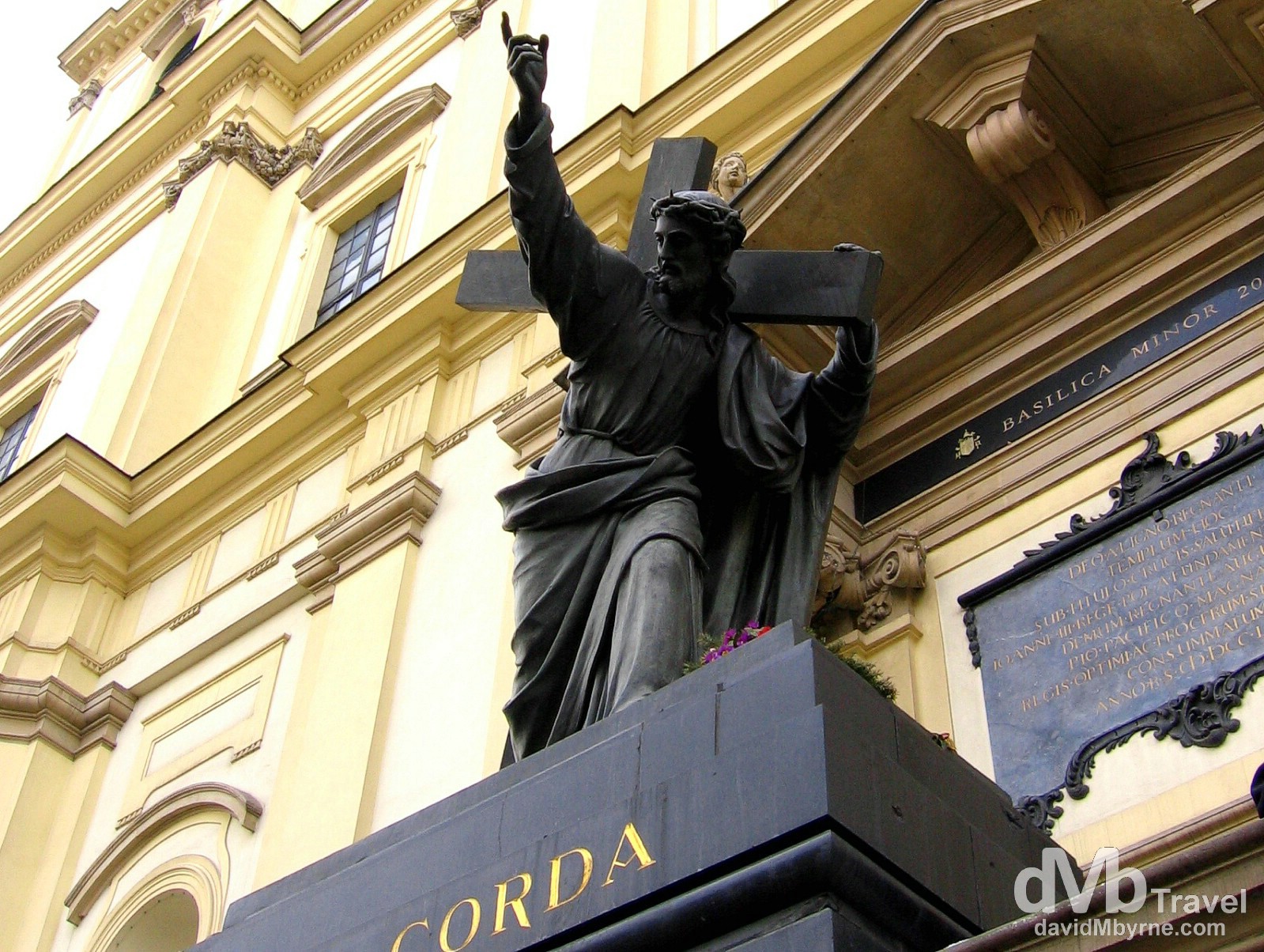 In a country where 80% of the population is Roman Catholic, one would expect to see quite a few churches on the streets of the capital. And you’d be right – churches are everywhere. This is one of the better know churches in the city, the Church of the Holy Cross, out front of which is the statue Christ Bearing His Cross. The church is found on Warsaw’s main artery, Szlak Krolewski (Royal Way), which terminates at the entrance to Warsaw’s number 1 attraction, it’s famous UNESCO listed Old Town. The church (supposedly) has Frederic Chopin’s heart preserved in a pillar, something I failed to locate. Chopin (1810-49) was a Polish composer who is widely regarded as one of the most famous, influential, admired and prolific composers for the piano. He died of TB, aged only 39, in Paris, after which his heart was moved here. There is also a museum to Chopin in a separate building not too far from the church, a more appropriate location, I would have thought, to store a preserved heart. Church of the Holy Cross, Warsaw, Poland. March 5, 2006. 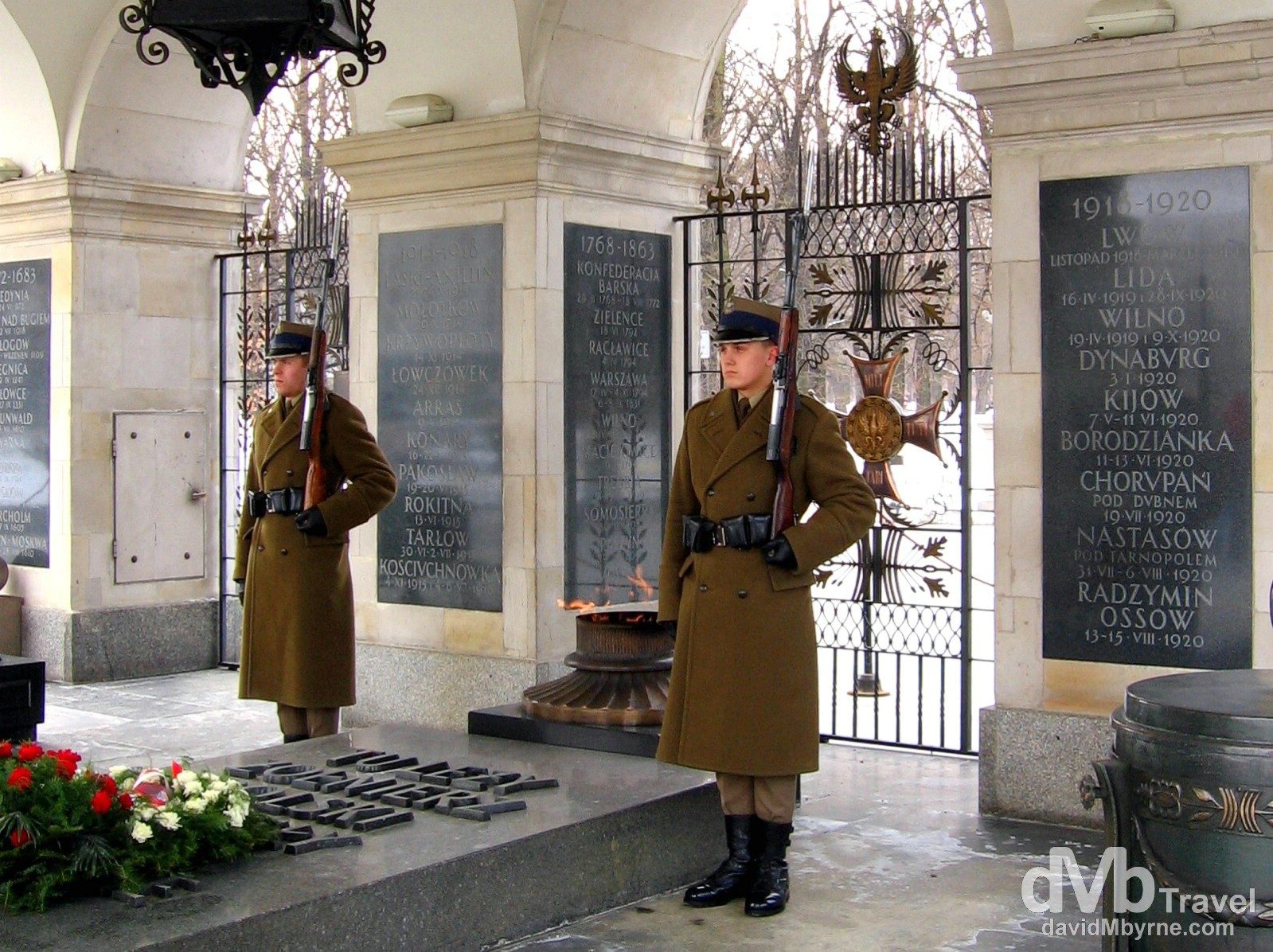 A little further down Royal Way towards the Old Town is Saxon Gardens where one will find the Tomb of the Unknown Soldier with its prerequisite eternal flame & ever-present honour guard. Being in the unenviable position of acting as the buffer between Germany, to the west, and Russia, to the east, Poland got quite a trouncing during World War II. The country was basically used a battleground for the war and most of its cities were badly damaged. Warsaw in particular suffered – during the August 1944 Warsaw Uprising of World War II, over 85% of the city buildings were destroyed with the majority having been painstakingly rebuilt in the proceeding decades, the most obvious example of large-scale reconstruction being the city’s UNESCO listed Old Town (next picture). The Tomb of the Unknown Soldier is housed in what remains of Saxon Palace. The palace, before being destroyed by the Germans in 1944, used to house the Polish Ministry of War. The tomb seen here was first built in 1925 to honour Poland’s World War I and Polish-Soviet war dead. It was positioned beneath the colonnade joining the two wings of the palace. Today only the part of the central colonnade sheltering the tomb remains. After World War II, soil from 24 additional battlegrounds was added to the urns, one of which can be seen to the right of this picture, and more inscriptions detailing the battles in which Poles fought were added to the tomb structure. Needless to say it’s a somber place to visit; the Poles do a good job respecting their war dead. The Tomb of the Unknown Soldier in Marshall Józef Pilsudski Square, Warsaw, Poland. March 5, 2006. 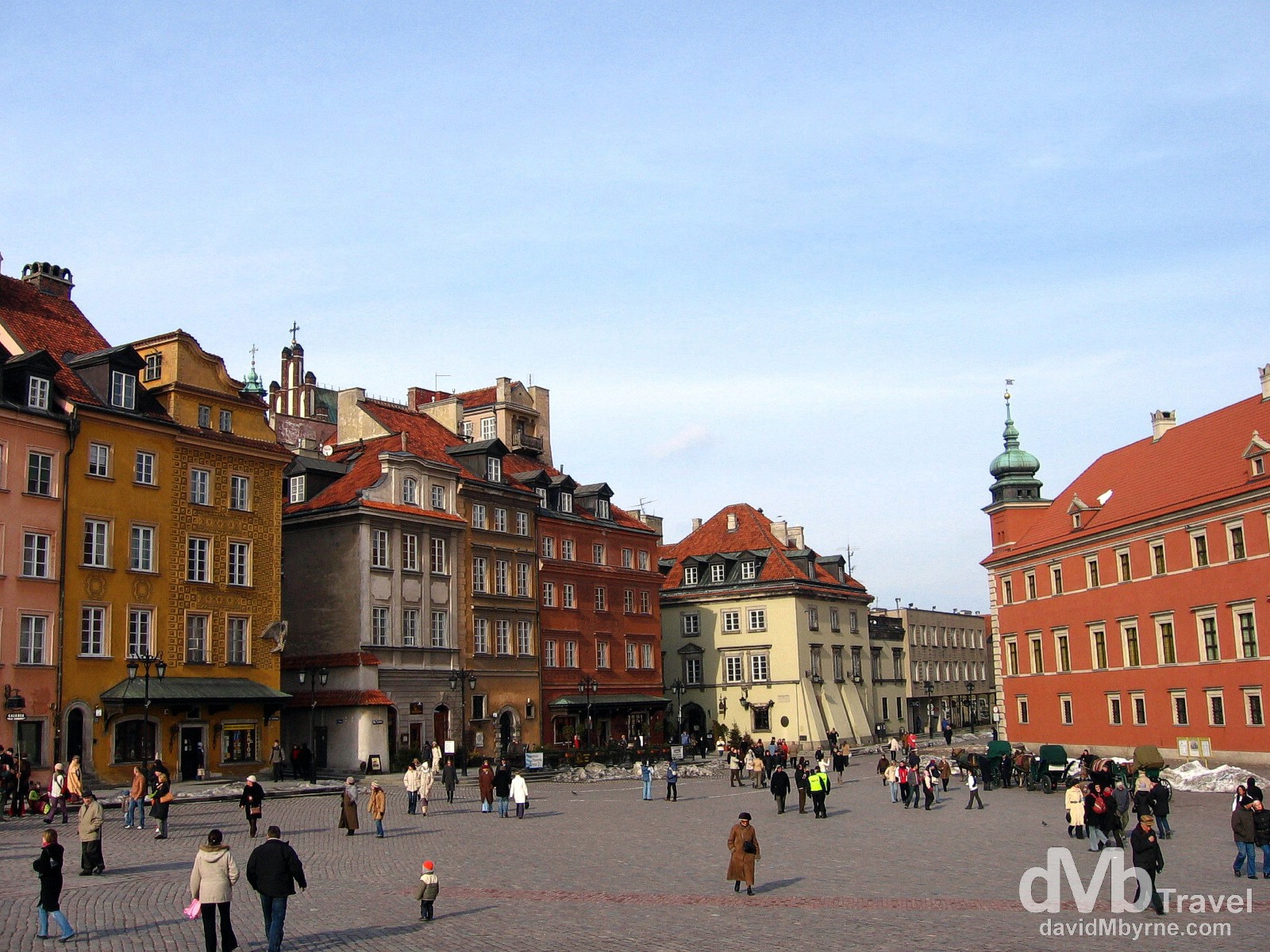 At the end of Royal Way is Plac Zamkowy (Castle Square), the entrance to the city’s main event – Warsaw’s stunning Old Town. For a city not known for tourist attractions this was something special. But it’s only old in name – it’s hard to believe but all the 17th and 18th century buildings seen here were completely rebuilt from their foundations after World War II, a job that earned the Old Town a place on the UNESCO World Heritage list of protected sights. The whole area of the Old Town consists of reconstructed streets with a square or two here and there. Most of the streets house museums, art galleries, tourist shops and cafes. The usual tourist traps. However, impressive as the reconstruction is (massively so) one cannot help but feel like they are walking around a huge movie set. Take nothing away from the Poles; as a reconstruction it cannot be faulted and they deserve their place on the UNESCO list. But for me it was still hard to feel like I was walking around a genuine historical region when in fact I was walking around a 60-year-old reconstruction of what used to be here. Castle Square’s dominant structure is the Old Town’s Royal Castle (redbrick building to the eight). First built in the 13th century and added to by successive Kings, it was reduced to rubble in 1945 and rebuilt in its entirety from 1971 to 1984. Castle Square in the UNESCO listed Old Town of Warsaw, Poland. March 5, 2006.

An outstanding example of a near-total reconstruction of a span of history covering the 13th to the 20th century. 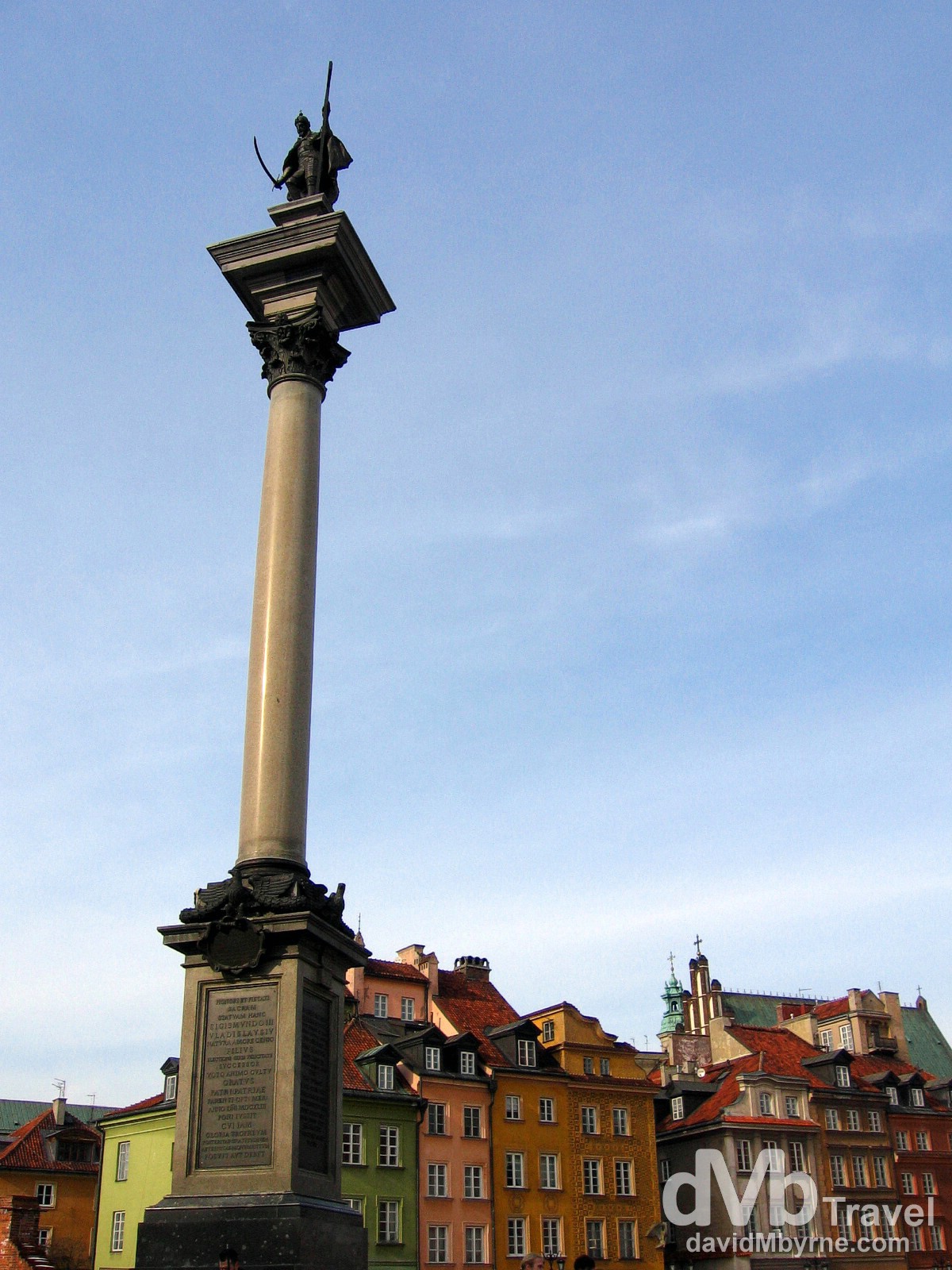 Another feature of Castle Square is the Sigismund III Vasa pillar/statue. Vasa was responsible for moving the capital of Poland from Krakow to Warsaw, something that got him immortalised atop a huge pole in present-day Warsaw’s Castle Square. Old Town, Warsaw, Poland. March 5, 2006. 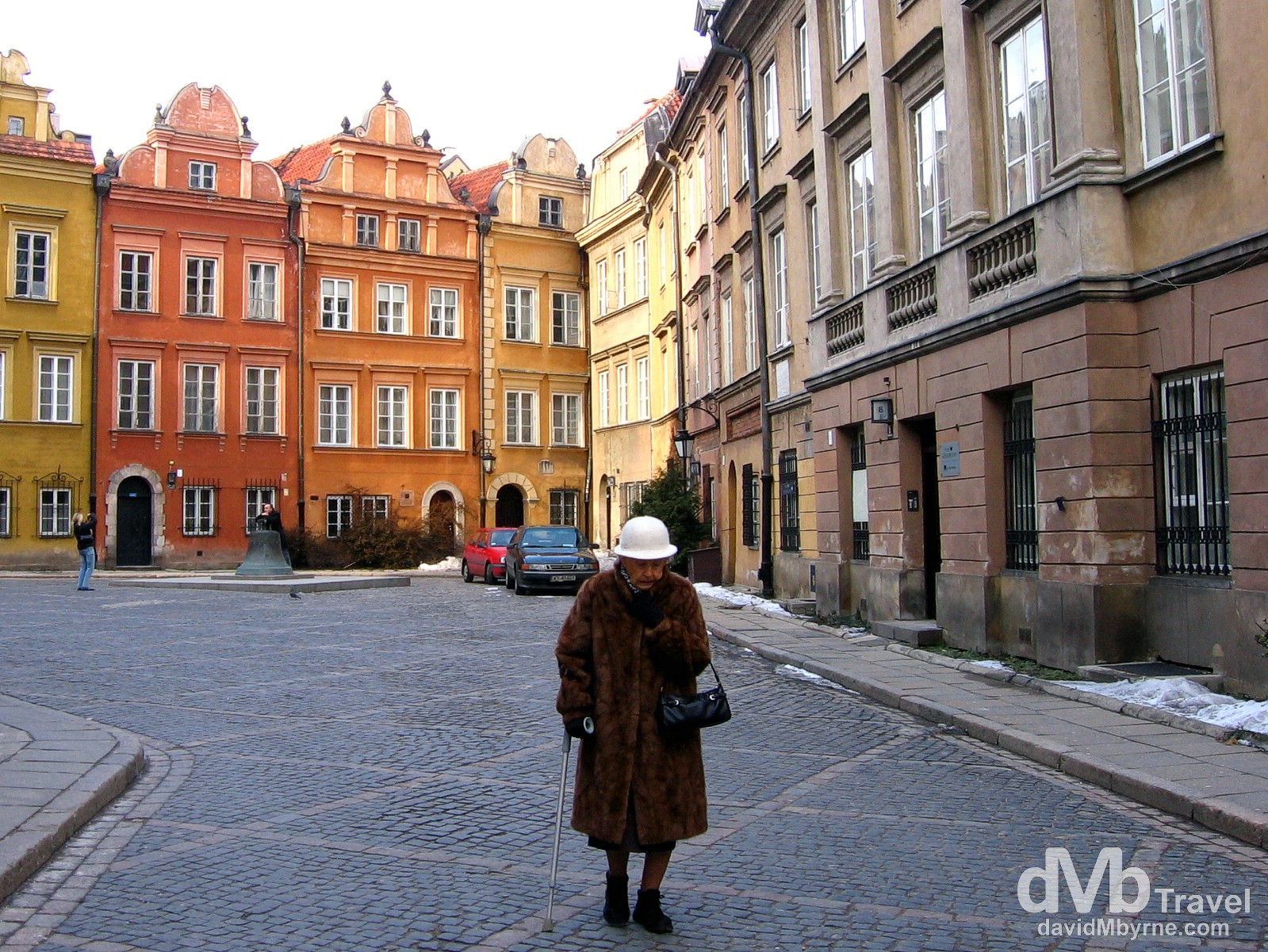 It’s a safe bet to say that the elderly lady seen here walking the streets of Warsaw’s Old Town is older than the surrounding buildings. Old Town, Warsaw, Poland. March 5, 2006. 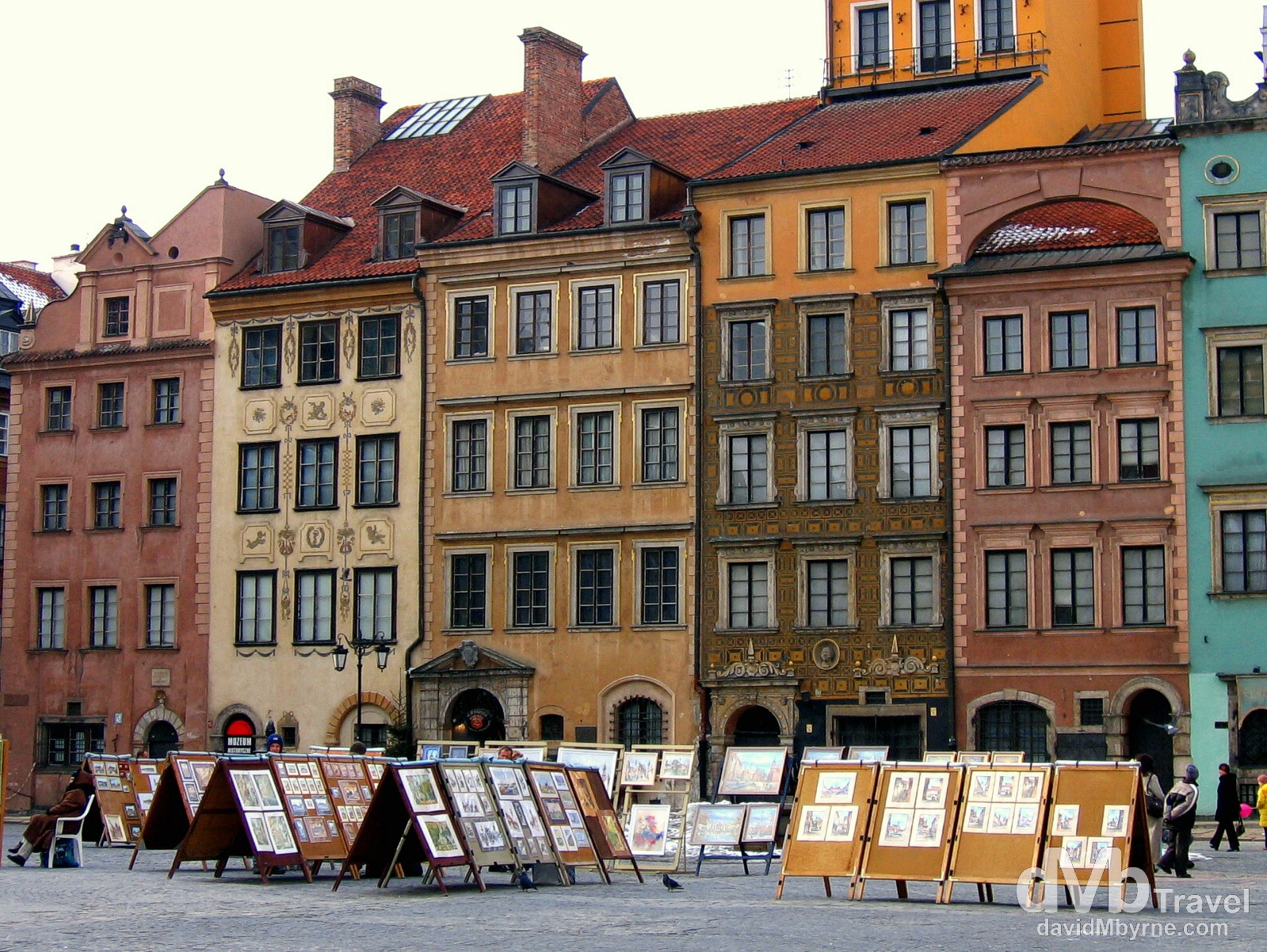 The varying colours of an outdoor art market in Old Town Square, the second of the two main squares in Old Town, Warsaw, Poland. March 5, 2006. 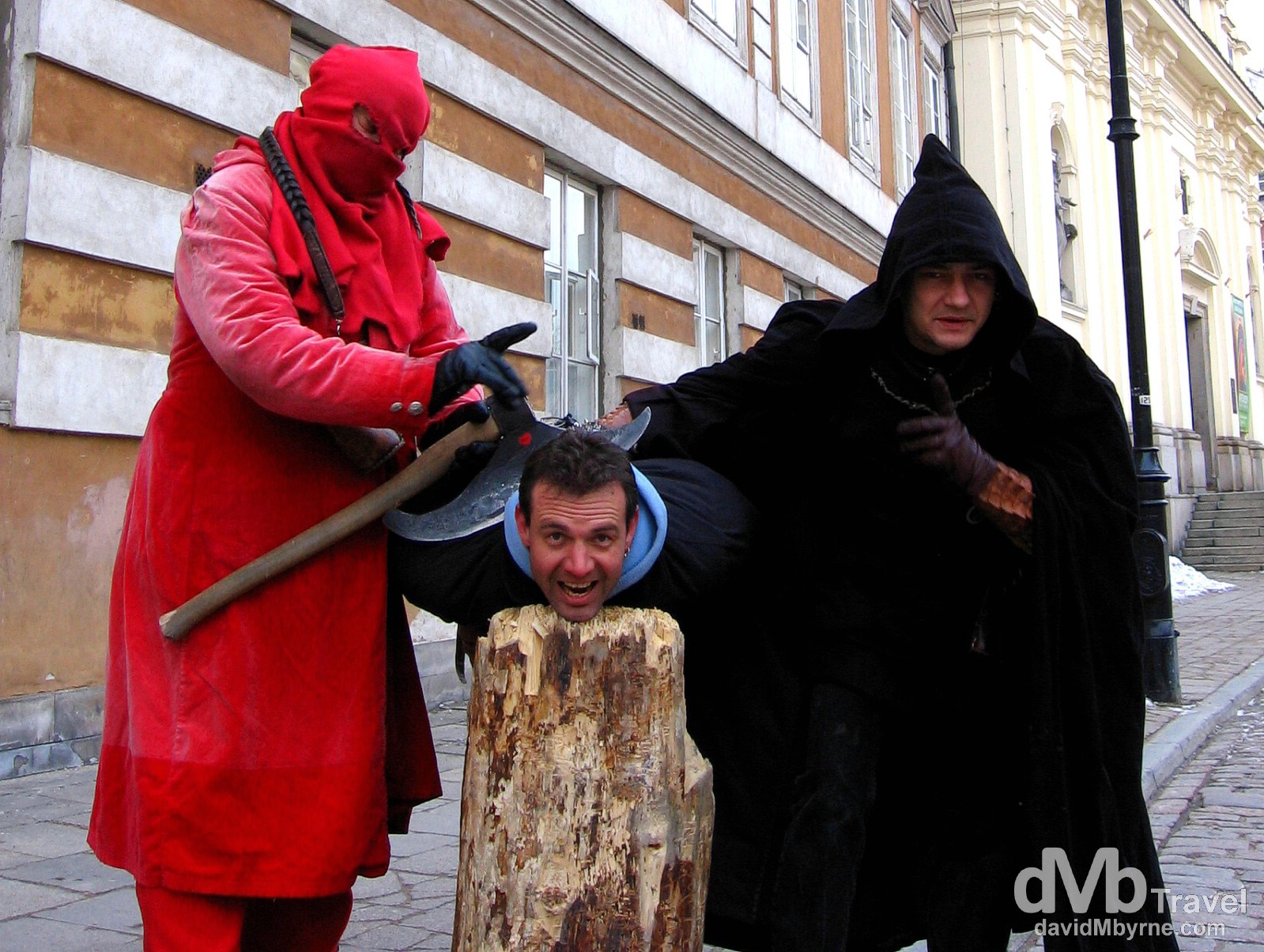 Henk, my travel buddy, & I commented on period-dressed combatants in Castle Square doing their bit to add to the whole medieval vibe that Warsaw’s Old Town is trying to pull off. These two were getting in on the act too, trying to make a quick buck from tourists like us. This picture of Henk under the executioner’s axe was taken on ul Freta in the so-called New Town area of Warsaw’s Old Town (confusing?). It was just outside the Barbican, a defensive tower that formed part of a medieval wall that encircled Warsaw and today defines the boundary between the Old and New Towns. It also wasn’t too far from the Marie Curie Museum a place that, as a physics graduate, would have interested me had it not been closed (Curie, born in Warsaw, was a physicist who won two Nobel prizes for her work on radioactivity, work that eventually lead to her death as a result of radiation exposure). Henk & I had just emerged from a popular milk bar (called Bar Melczny Pod Barbakanem) where we tried to get something to eat. It’s touted in our guidebook as a great place to get cheap and unpretentious but good food. Just what we wanted. But among the confusion of exactly what they served we only managed to get an expensive cup of tea. I guess we have to work on our Polish. Freta, Old Town, Warsaw, Poland. March 5th 2006