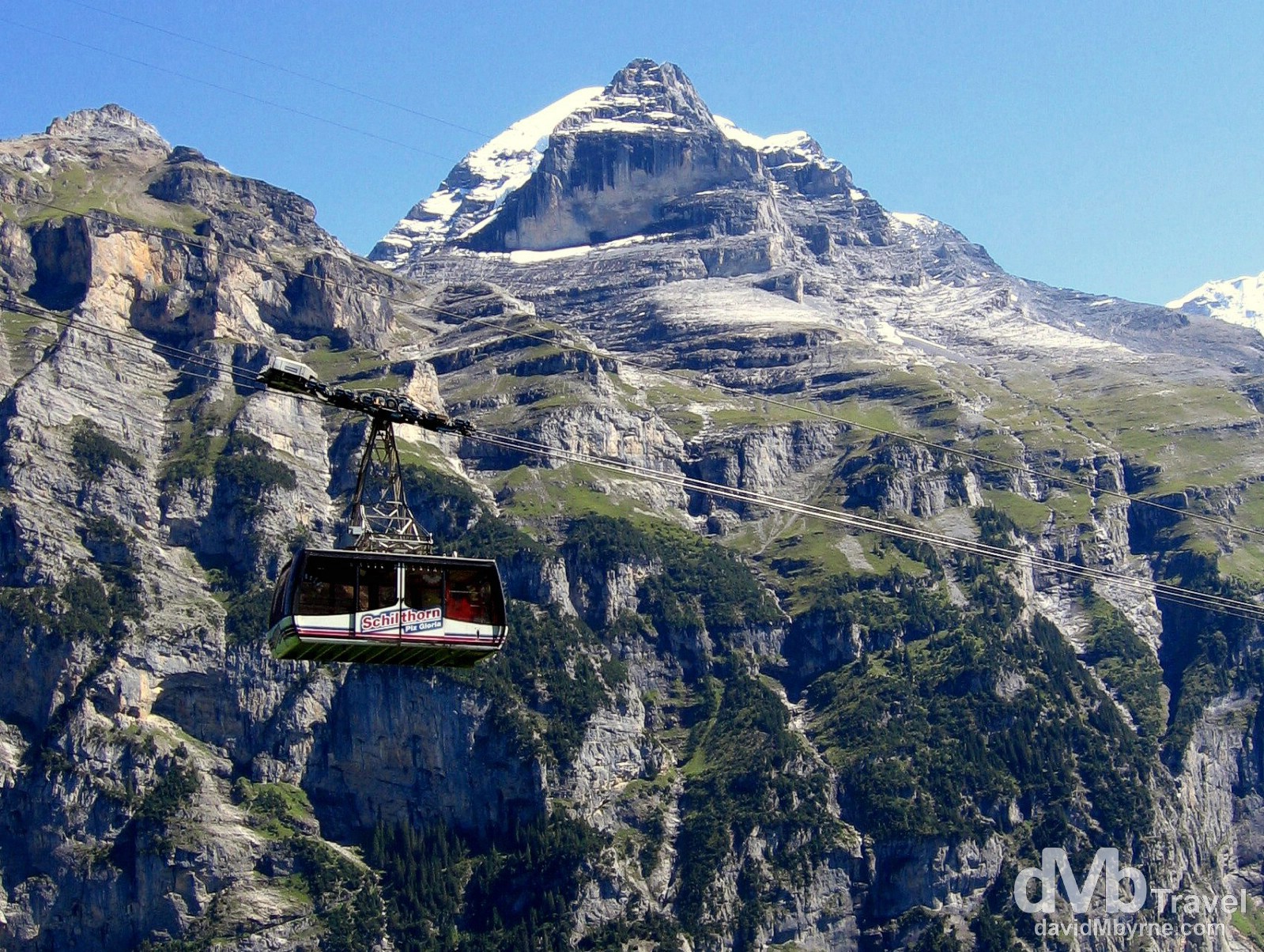 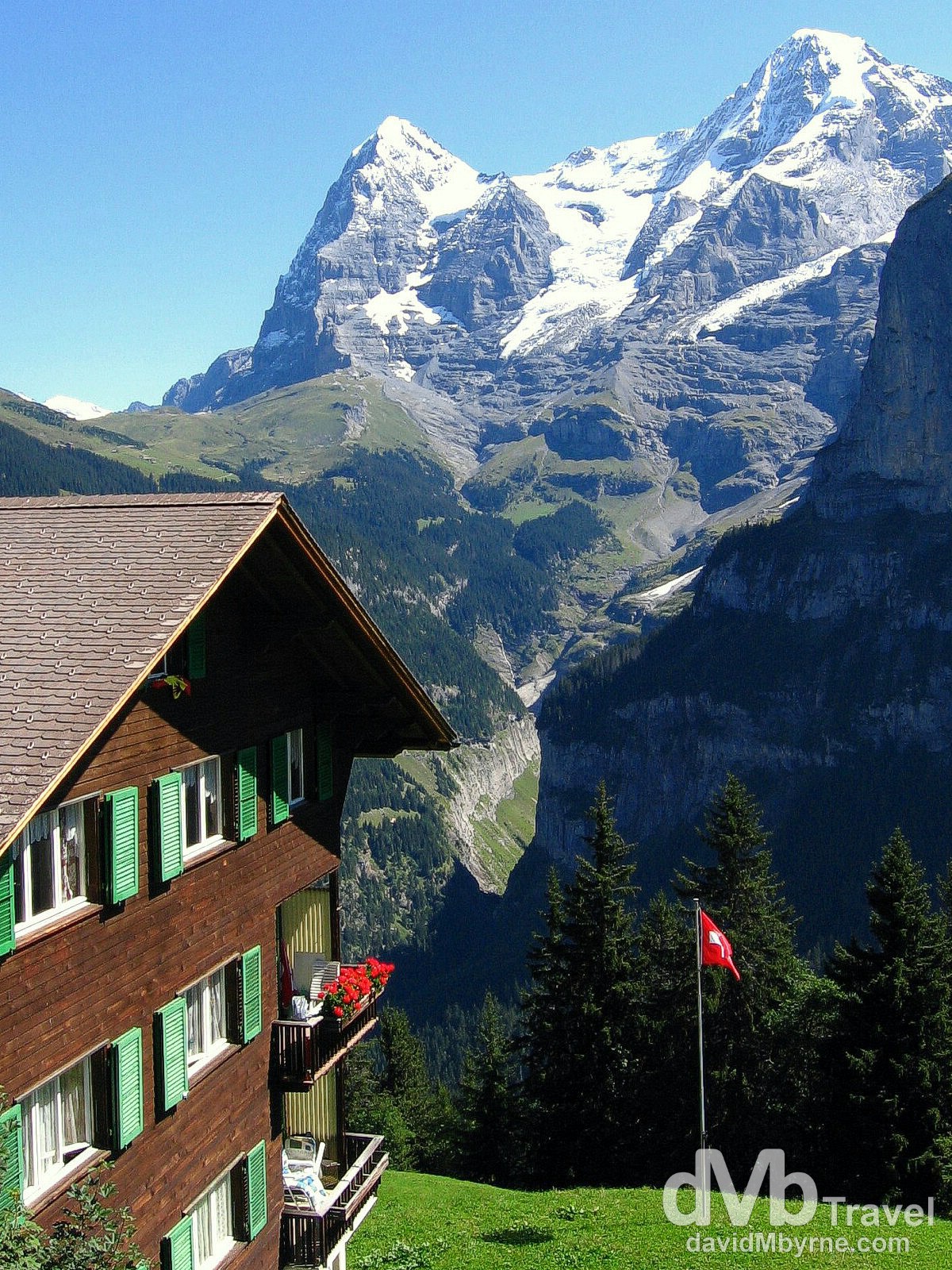 Anyone who has not seen the scenery which surrounds Interlaken does not know Switzerland.

The Jungfrau region of the Swiss Alps Bernese Oberland is an area of spectacular natural alpine beauty in south of Switzerland, a memorable, stress-free train ride from the Swiss capital of Bern. The it’s-almost-too-good-to-be-true scenery on display here is alpine Switzerland at its stereotypical best – rugged snow-capped peaks towering over deep, green valleys (white in winter) sprinkled with droopy-roofed chalets. It’s almost too idyllic, but it is what it is. The town of Interlaken, a short train ride from Bern, is the gateway to the Jungfrau Region, described in my guidebook as follows:

Lying south of the major gateway resort of Interlaken, Jungfrau is the rather uninspiring title foisted on what is perhaps the most dramatic, certainly the most memorable, mountain scenery in the whole of Switzerland. The Matterhorn may be more recognizable, Davos and St. Moritz may be flashier, but the quantity and sheer scale of the awesome giants on offer here at close quarters takes your breath away. Sight lines throughout the area are dominated by the mighty triple crest of the Eiger, Mönch & Jungfrau (Ogre, Monk and Virgin) – three giant peaks rising side by side and topping out at over 4000 metres.

Lauterbrunnen || The Village & Valley
I had decided well before arriving in the Jungfrau region to base myself in the small village of Lauterbrunnen, a 20-minute train journey from Interlaken. The village sits at the entry to the Lauterbrunnen Valley, an immense U-shaped cleft (the world’s deepest) with high, steep cliffs either side – rarely more than a kilometre apart – & rising 1000 metres from the valley floor. From these valley walls some 72 lacy, misty waterfalls fall into the valley making the whole place look utterly spectacular – even hardened Alpinists shrug their shoulders and call it the most beautiful valley in Europe, bar none. 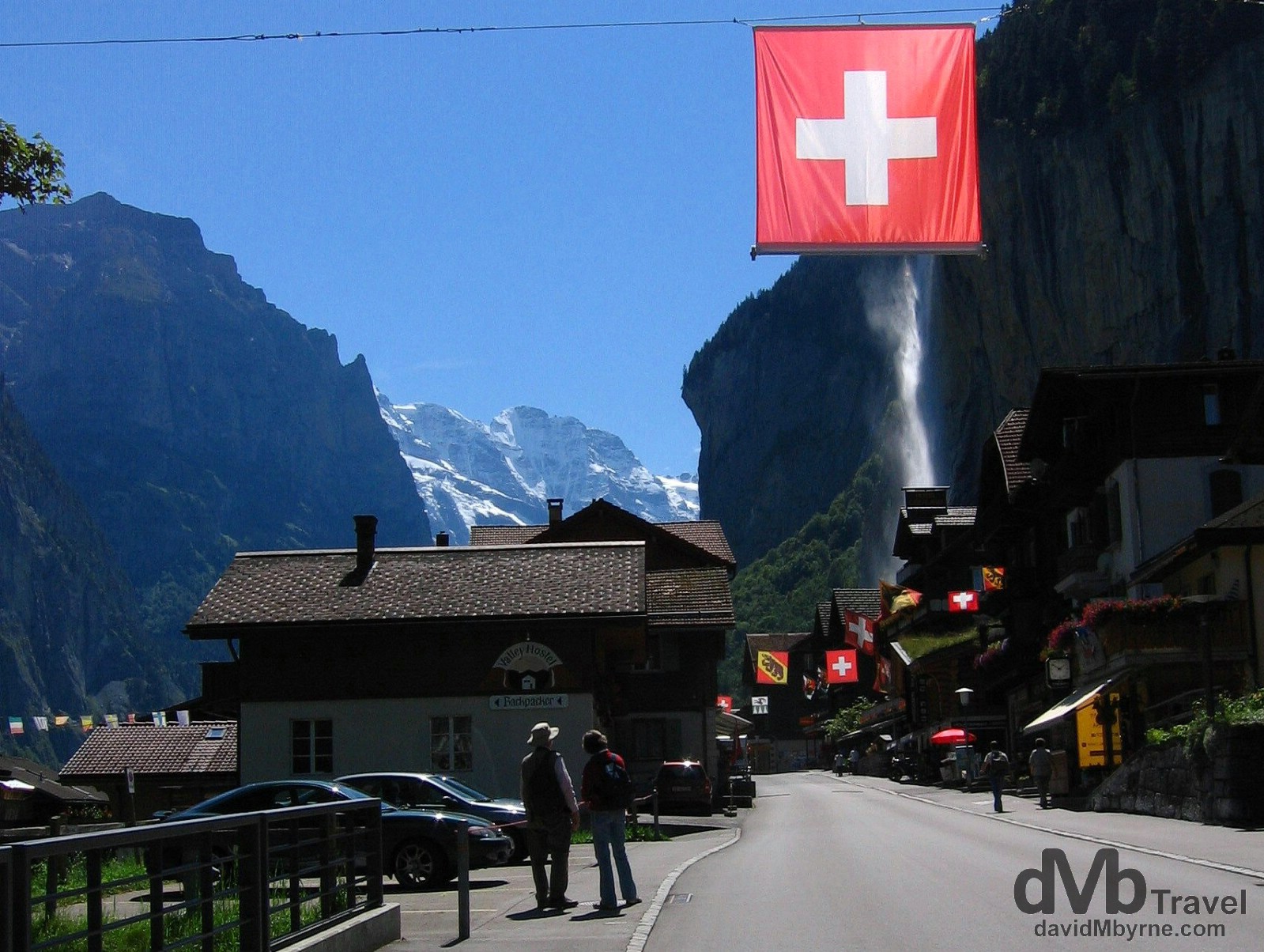 A very poor shot (lighting up here is washed out & intense most hours of the day) of the view that greeted me as I approached the village of Lauterburren upon arrival from Bern (via Interlaken). I got more than an eyeful from the train of snowy peaks, spectacular lakes and rolling valleys as I approached the village but the views up the Lauterbrunnen Valley upon arrival were nothing short of spectacular. The village marks the start of the Lauterburren Valley, looking up which, in the distance, is the perfectly framed view of the snowy peak of Breithorn (3782 metres). Also shown in the picture is the signature waterfall of the Lauterbrunnen Valley, just one of valley’s 72 waterfalls, the 300-metre high Staubbach Falls, the highest falls in Switzerland. In the village of Lauterbrunnen (

Jungfrau Trek
I’ve spent the last few days in go-slow mode, taking in the sights of what truly is a spectacular part of the world. The undoubted highlight of my time here was the trek/hike I completed today. I took a cable car from the valley floor near the village of Lauterbrunnen (elevation 762 metres) to a small outpost called Grütschalp on the valley’s eastern cleft (elevation 1489 metres). From there I took a scenic train ride, touted as one of the best in Switzerland, along the top of the cleft to a small village called Mürren (elevation 1654 metres). The views from Mürren, 800 metres down to the Lauterbrunnen Valley floor and of the distant peaks of Eiger (3970m), Mönch (4107m) and Jungfrau (4158m), were amazing. From Mürren I walked, yodelling as I went (not really), for a few hours to another village called Gimmelwald (elevation 1400 metres) from where I descended down to the Lauterbrunnen Valley floor at Stechelberg (elevation 910 metres), which marks the other, western end of the Lauterbrunnen Valley from my base in Lauterbrunnen Village. 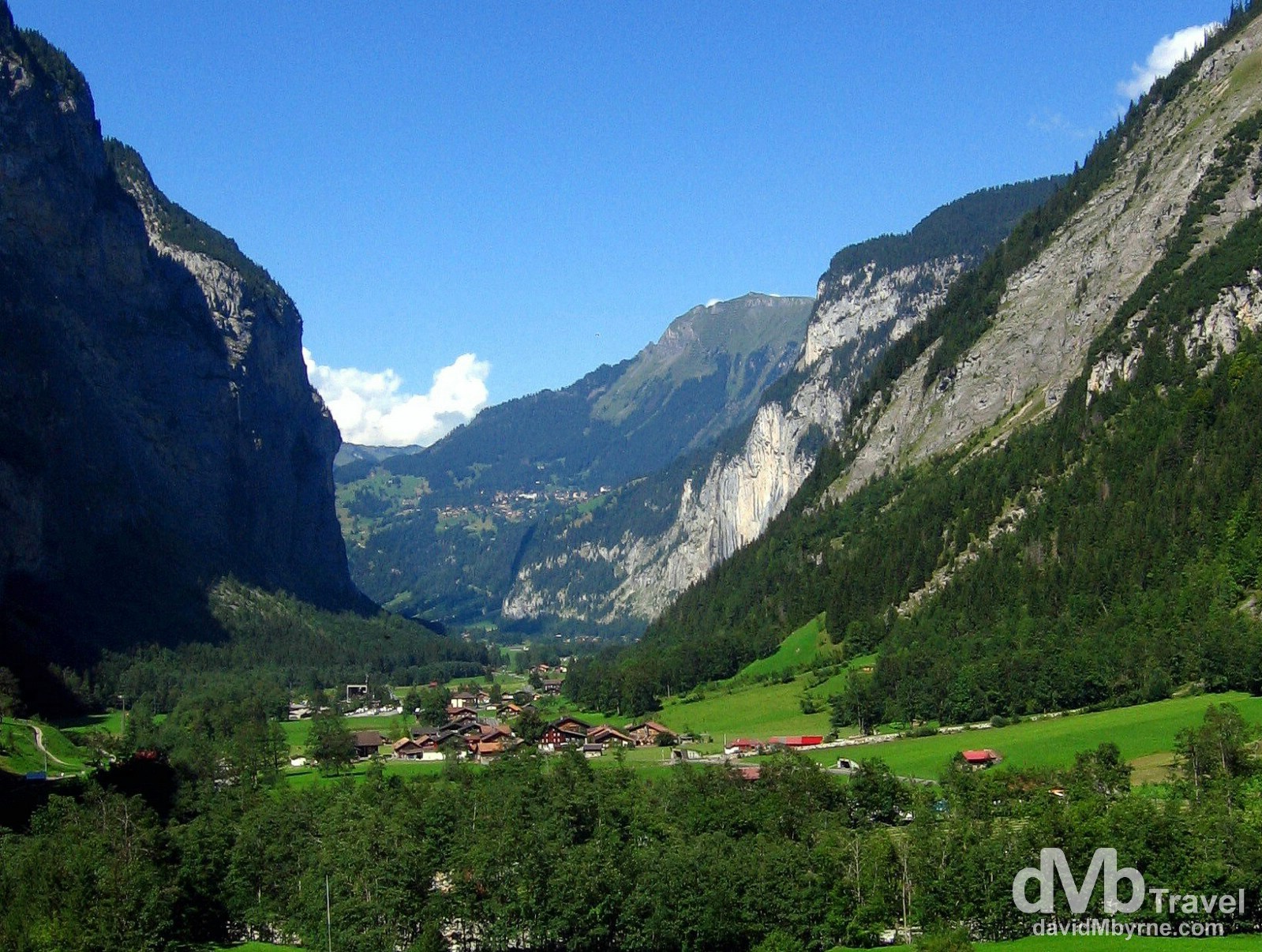 Looking down the Lauterbrunnen Valley, the world’s deepest U-shaped cleft, from near the village of Stechelberg, Jungfrau region, Switzerland. August 25th, 2007.

I completed the loop trek by walking for 90 minutes from Stechelberg along the valley floor back to Lauterbrunnen Village, straining my neck as I went & with a stop off at the thunderous Trümmelbach Falls, the only accessible waterfalls in the world to be completely within a mountain – up to 20,000 litres of rushing water a second, runoff from the high mountains, gush through weird and wonderful rock formations, formations that have been gradually sculpted over the years by the fast flowing water.

Switzerland vs. New Zealand
The scenery of the Swiss countryside, including the mountains, didn’t disappoint. Of course it didn’t. It’s actually hard to put into words exactly how picturesque, how idyllic the whole region is. But here’s the thing – it’s almost too idyllic. Pass through any valley, one with chalets separated by lush green fields full of bell-wearing cows, and you could be forgiven for thinking what you are seeing is all staged. Fabricated. Throw into the mix a turquoise-blue lake and a few snow-capped peaks and you’ll probably be convinced it is.

It’s hard also to compare the scenery to anywhere else on the planet, at least anywhere I’ve yet seen. But I will say this – I found the overall scenery of what I saw in New Zealand more natural, more awe-inspiring. The New Zealand landscape is more diverse, more untouched. Whereas the scenery here on offer in the Jungfrau Region is a more pristine kind of stunning beauty, New Zealand offers a more rugged kind, the kind that gets my vote. I shouldn’t really be comparing them. It’s kind of daft to do so, even though I have done just that.

The Schilthorn Cable Car as seen from the walk between the villages of Mürren & Gimmelwald. Cable cars can get you pretty much anywhere in the Jungfrau Region and one of the few sounds you’ll hear when hiking the countryside between the villages of Mürren & Gimmelwald, aside from the jingle of cow bells, will be the overhead hum of cable car pulleys. This cable car ferries people to the 2970-metre summit of Schilthorn, the most famous lookout in the Swiss Alps offering 360 degree panoramic views of the whole region. Jungfrau region, Switzerland. August 25th, 2007.

A few observations from the past few days in the Swiss Alps.

· Little Korea || Little India
This region is immensely popular with Indian & Korean travellers; all signage in the awesome Valley Hostel in Lauterbrunnen is in both English & Korean. Indians are drawn here because of the movies; the Bollywood movie industry shoots 90% of its overseas movies in the Swiss countryside and thus most Indians view it as a sort of utopia that is to be visited if at all possible (which of course isn’t possible for the vast majority of the population). The reason for the region’s popularity with Koreans I can’t explain.

· One of the wonders of the modern world
Swiss public transport is frighteningly efficient. Not that this came as much of a surprise. This is what my guidebook has to say on the subject:

The massively comprehensive Swiss public transport system remains one of the wonders of the modern world. The Swiss are the most frequent train users in Europe – not surprising, given the quality of the network. Travelling through Switzerland by train is invariably comfortable, hassle-free and extremely scenic, with many mountain routes an attraction in their own right.

· Budget Busting
It’s expensive to eat out. Yep, if you have any sort of budget, eating out in Switzerland is invariably going to cut into it. So don’t do it. Utilising the fully-equipped kitchen of the Valley Hostel in Lauterbrunnen, one I shared with half of Seoul, eased that travelling-in-Switzerland financial burden.

· Taken for granted
If you lived up here in the Swiss Alps you’d eventually reach a point when you’d just take the scenery on your doorstep for granted. That strikes me as such a shame.

Point & Shoot (& Hope)
I’m assuming any amateur photographer like me will find it hard to get good shots here in the intense, saturated, midday light one finds high up here at altitude in the Swiss Alps. A constant battle with exposure compensation is assured. It’s point & shoot & hope territory.

· Commandment #3 || Keep Holy the Sabbath
Switzerland is a strictly 9-5, Monday to Saturday, society, even in cities and even in tourist destinations. What I’ve seen of Switzerland comes to a complete standstill on a Sunday and after 5 p.m. most other days.