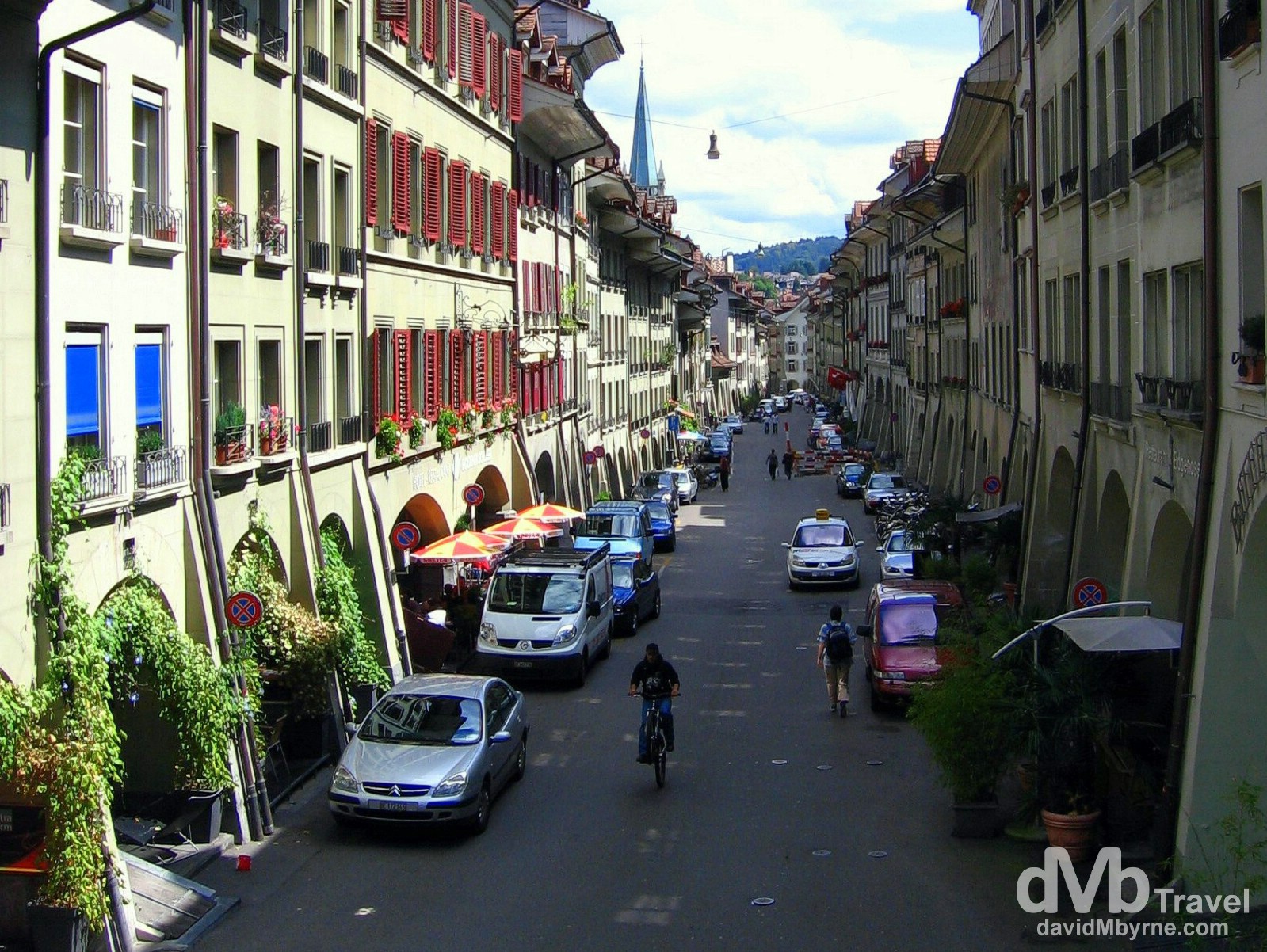 In Italy for thirty years under the Borgias they had warfare, terror, murder, bloodshed, but they produced Michelangelo, Leonardo da Vinci and the Renaissance. In Switzerland they had brotherly love; they had 500 years of democracy and peace. And what did that produce? The cuckoo clock.

Founded in the 12th century on a hill site surrounded by the Aare River, Berne developed over the centuries in line with a an exceptionally coherent planning concept. The buildings in the Old City, dating from a variety of periods, include 15th-century arcades and 16th-century fountains. Most of the medieval town was restored in the 18th century but it has retained its original character.

I arrived in Switzerland early yesterday afternoon off the train from Dijon, Burgundy, France. It’s my first visit to the country, my the first visit to its quaint little capital city of Bern (also Berne, if you’re that way inclined), which is also the name given to one of the 26 governing cantons that in 1848 joined together to create a unified Switzerland – prior to that Switzerland as we know it today had been governed by France, a country they only gained independence from following Napoleons defeat to the British at Waterloo in June 1815. I found my accommodation without much hassle or walking as distances in Bern’s compact, UNESCO World Heritage listed Old Town are small. With only 135,000+ inhabitants, Switzerland’s 4th largest city has a real small town feel to it which I guess is all part of its charm. And charming it is, its medieval street plan of street fountains & doughty towers set among quiet, traffic-free, cobbled lanes, all lined with sandstone arcaded buildings. 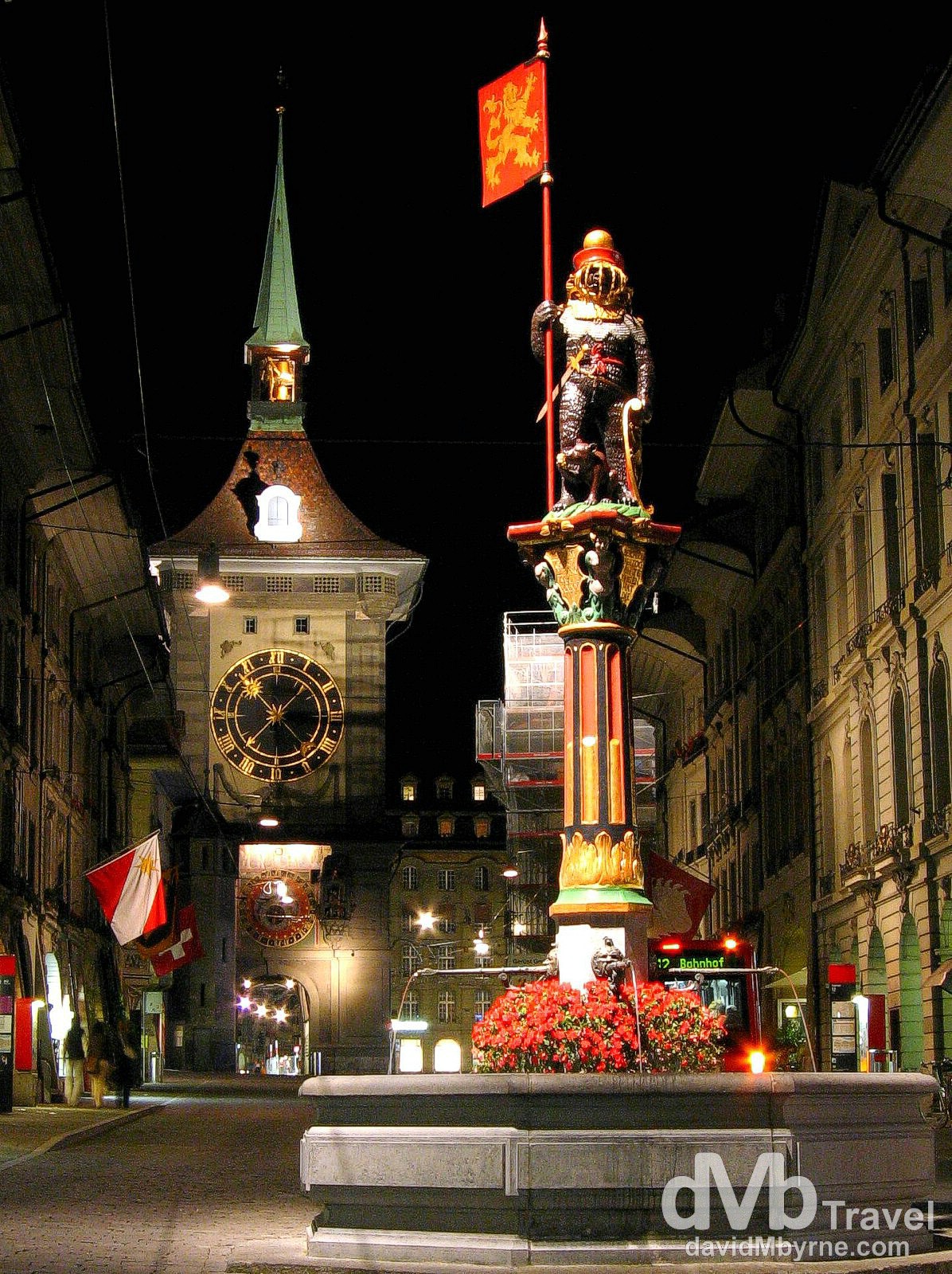 Bern’s Kramgasse (Grocers Alley) is one of the three principal streets in Bern’s Old Town, the medieval city centre of the Swiss capital & the centre of urban life in Bern up until the 19th century. Today it is a popular shopping street, its length, slight curve and long line of Baroque façades combining to produce Bern’s most impressive streetscape. The Kramgasse contains many of Bern’s famed ornamented fountains, fountains that decorate the middle of the street and are topped with statues, all of which have some historical connection to the city. The statue seen here (dating from 1535) is that of an armoured bear, the symbol of the city, holding the standard of the city’s founder, Berchtold von Zähringen. Legend has it that von Zähringen went hunting in the surrounding forests and named his new city after his first kill of the day which turned out to be a poor innocent bear, a bear that can still be seen today adorning the city’s coat of arms. At the top of the street is Bern’s premier Old Town sight and the focal point of the city, the 1218-1220 Zytglogge, or Clock Tower, as much a symbol of Bern as the bear. The tower’s main timepiece, the upper & larger of the tower’s two dials, had an on/off first 300 or so years and didn’t work at all for some 122 years until a new mechanism was installed in 1530. It is still working today, original parts and all, something one would expect from a Swiss timepiece. Below the main dial, & just above the pedestrian arch, is an intricate astronomical and astrological device, which, in one small diameter, displays a 24-hour clock, the twelve hours of daylight, the position of the sun in the zodiac, the day of the week, the date & the month, the phases of the moon and the elevation of the sun above the horizon, everything kept accurate by linkage to the main clock mechanism, just as with a similar, albeit better-known astronomical clock tower in the Old Town of Prague, Czech Republic. While Bern’s clock tower is definitely a photograph-worthy piece of time-old bricks & mortar, the structure’s main draw is generally touted as being the display of little mechanical figures located to the right of the astronomical dial – a crowing cock, a parade of bears, Chronos with his hourglass, & a dancing jester – that are set motion 4 minutes before the top of every hour. It’s a rather tame, underwhelming display that tends to leave onlookers looking for more (it’s certainly not on par with a similar display by the aforementioned astronomical clock in Prague, the Czech Republic). Bern, Switzerland. August 23rd 2007.

The Bern scene is one that has barely changed in over five hundred years save for the adornment of modern shop signs and the odd car or tram rattling past. That the town looks so good today is partly due to the fact that it, and Switzerland itself, escaped any damage during World War II. The reason for this is largely because the Nazis never actually got around to attacking them (seemingly they – the Nazis – had a plan drawn up but got distracted fighting the Russians) and possibly because Hitler needed the strong Swiss economy to help fund his war effort and its banks to store the fruits of same – the country is infamous as one of the safest places in the world to stash a fortune, legitimately earned or otherwise. Of course, that the Nazis directly used Swiss bank accounts in any way is strongly denied by the Swiss themselves and has been in the 60+ years since the war ended. But regardless, commentators agree the Swiss banking system may have had played some part in the country being spared the WWII destruction reaped on its neighbours.

The Old Town of Bern sits on a small finger-like peninsula of land with its three principal streets changing name as they run from the west of the city down to the gorgeous aqua waters of the Aare River in the east. The streets meet here, the easternmost point of Bern’s peninsula and the location of Nydegg Castle, built probably before the 1191 founding of the city of Bern. The castle was destroyed in the mid-13th century and its location is now marked by Nydeggkirche Church (to the left), which today is a mishmash of elements added to an original 1341 building. Bern, Switzerland. August 23rd, 2007.

Einstein-Haus
I spent a few hours looking around a little Old Town apartment that was inhabited by none other than Albert Einstein in the early 1900s. At the time Einstein was a little known clerk in a Bern patent office and it was, as every tourist information office around the town will be quick to point out, here in Bern that he formulated his groundbreaking Theory of Relativity, a theory that turned the Physics world on its head.

It’s great here in Bern, an ancient, thoroughly comfortable city, in which one can live just as in Zürich. Both sides of the roads are completely lined with arcades, so that one can stroll from one end of the city to the other in the worst down power without getting noticeably wet. The inside of the houses are uncommonly clean. 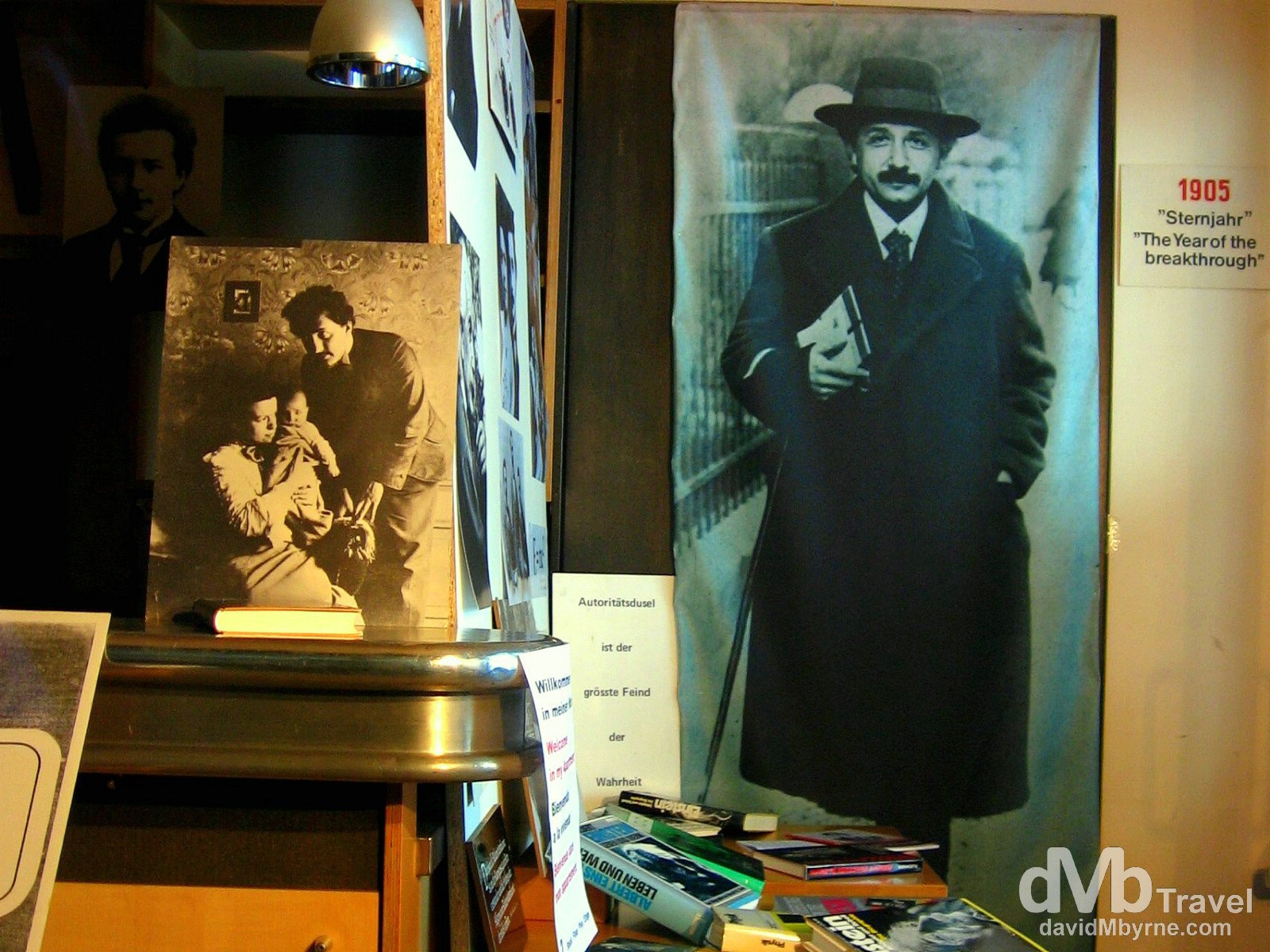 A display at number 49 Kramgasse in Bern’s Old Town, the Einstein-Haus, the apartment and workplace of the famous scientist who developed his Theory of Relativity in 1905 while working in the Bern Patent Office. The apartment, now a museum, is tiny but has some great text about Einstein’s life and his discoveries. Einstein-Haus, Number 49, Kramgasse, Old Town, Bern, Switzerland. August 23rd, 2007.

I am well; I am a venerable Swiss federal pen-pusher on a pittance. Besides that, I ride around on my old mathematical hobby-horse and scrape away at the violin – both within the tight limits which my 2-year-old leaves me for such superfluous things.

A few Swiss observations which some, especially the Swiss themselves, might class as generalisations.

· The Swiss are a smart lot.
Switzerland is quite multilingual – it has not one, not two, not even three, but four official languages, they being German (Bernese German), French, Italian and Romansh. Most Swiss are multi and even trilingual. A smart lot these Swiss. Smart indeed.

· €-phobes
Switzerland is not in the EU and they don’t use the Euro. Nope, their pockets are still full Swiss Francs after deciding not to jump on the single currency bandwagon. Also, their much-vaunted neutrality led them to decline not only EU but also UN membership. But has them being economically aloof from their EU neighbours harmed them in anyway? Nope, not a bit. On a world scale they have one of the highest standards of living and are one of the richest countries in the world with the average per capita income of more than €40,000 a year. And that’s after being subjected to some of the highest levels of taxation in the world.

· Patriotic
They are a patriotic bunch, that is if the abundance of Swiss flags flying is any indication as to their level of patriotism. The white cross on a red background flags are everywhere.

· They are law-abiding
No one here seems to bend, never mind break, the rules, something that extends to crossing the road. Jaywalking is unheard of; people wait for permission to cross the road even on a narrow street void of any traffic. As a tourist you quickly follow suit.

· They all ride bicycles
So the Swiss are smart, patriotic, rich, law-abiding and fit.

· It’s expensive
Of course it is. It’s Switzerland. But I knew that before coming. CHF35 (€28) for a dorm bed & €15 for a budget stretching budget meal of em, burger, hot dog & coke. I’ll get to fondue eventually.

· It’s picturesque
Of course it is, it’s Switzerland. Even the city is idyllic. I can’t wait to get to the Jungfrau Region of the Swiss Alps, my next stop. 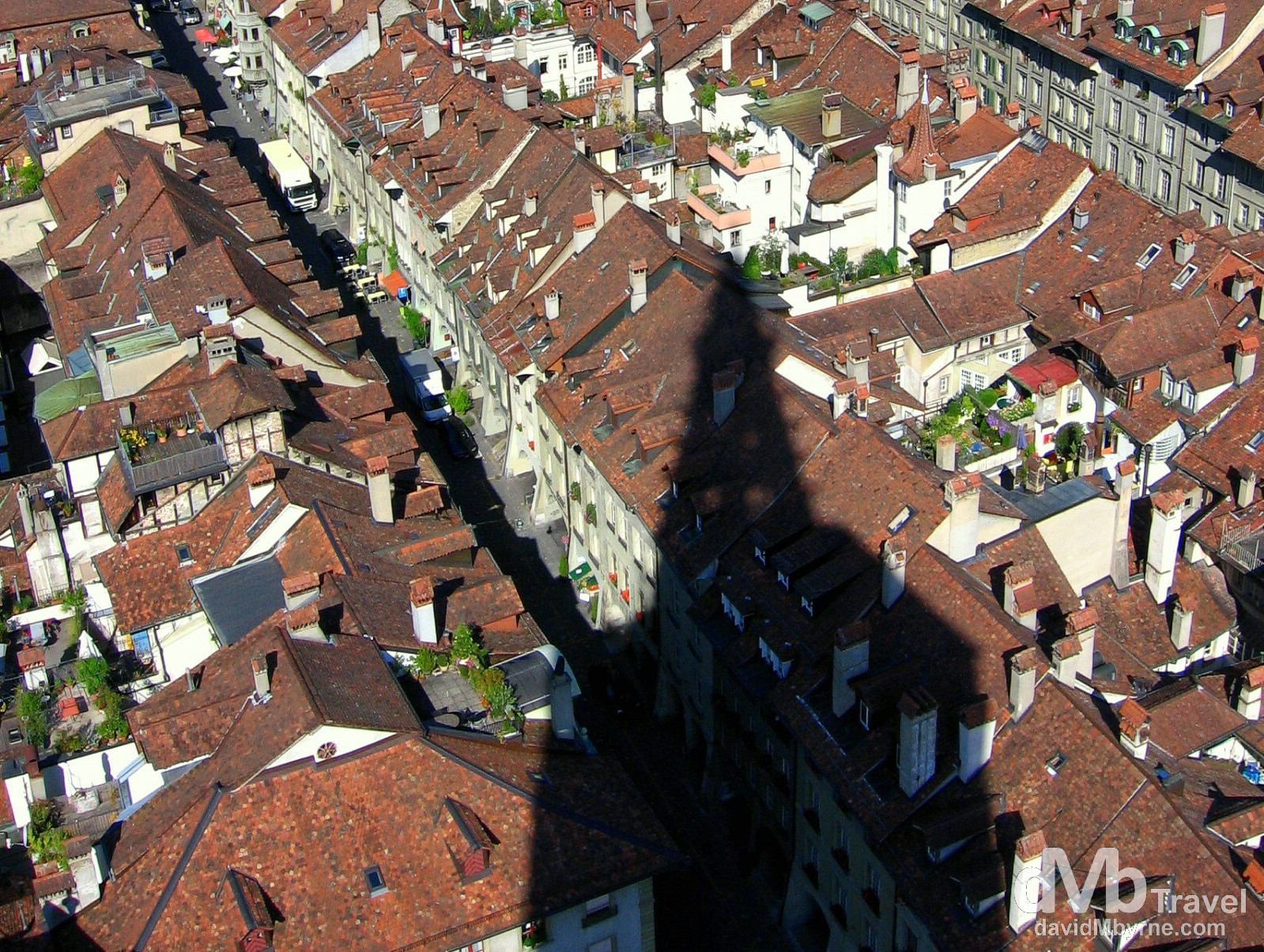 The spire of Bern’s late-Gothic Cathedral, or Münster, casting a shadow over the roofs of the city’s Old Town. There has been a church on the site of the present Bern Cathedral since 1224 with the present structure being built between 1421 and 1893 – yes, for some reason it took 472 years to build. The cathedral’s stained glass windows, organ, granite pillars and vast cavernous interior may be the European cathedral norm but they are still impressive nonetheless. I scaled the 254-step spire, the highest in Switzerland, for some nice views of the Old Town & the surrounding countryside with an added bonus of views south to the snow-capped peaks of the Swiss Alps, my next stop. Bern, Switzerland. August 24th, 2007.