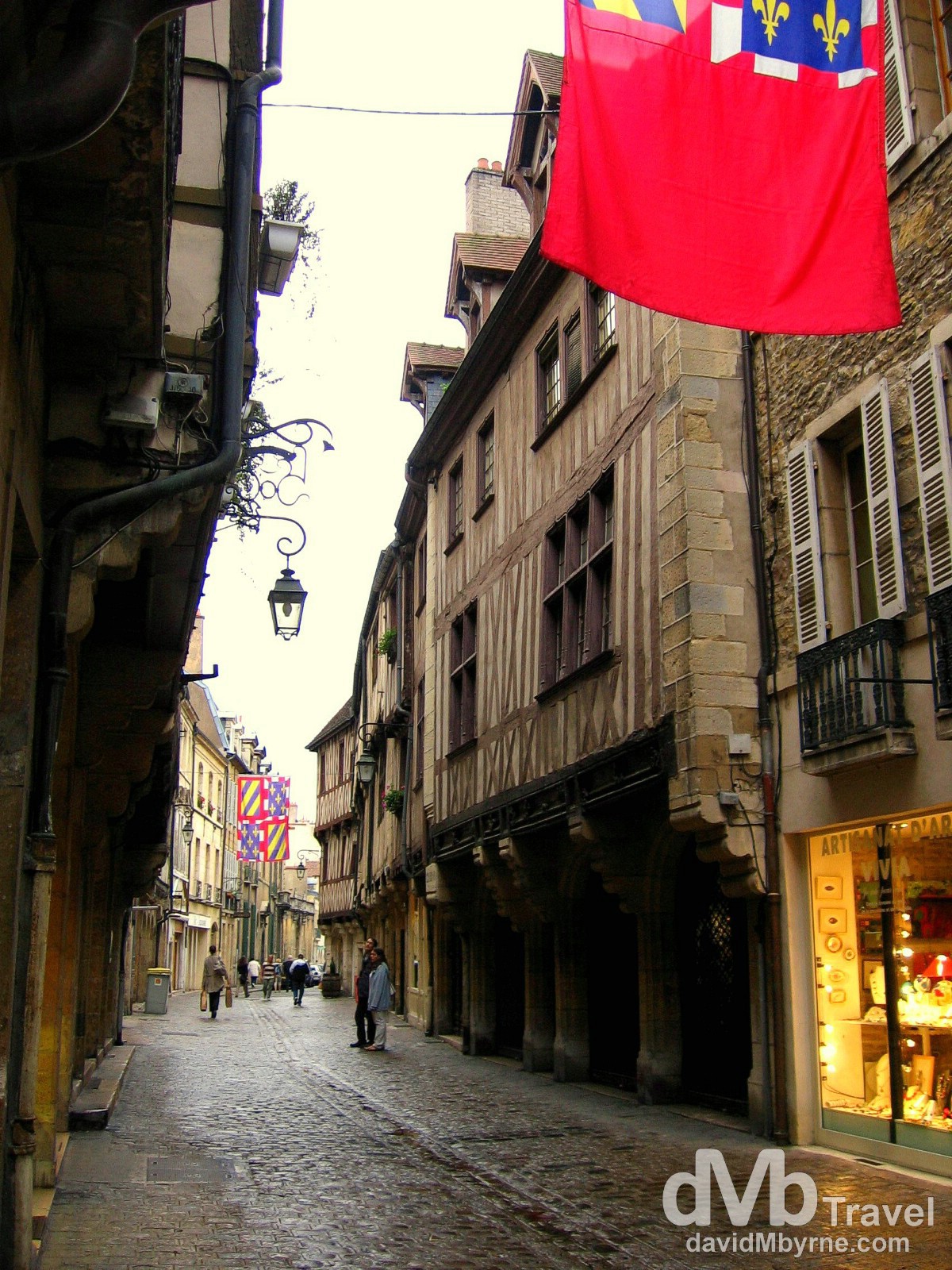 Dijon is a city in eastern France, the capital city of the Burgundy region, a rural region famed for its vineyards and rich food. It’s somewhat of a rogue region (akin to Quebec, Canada) – for centuries it was lorded over by powerful dukes who remained independent of the French crown before finally being brought in line by French Kings in 1477. Present-day Dijon boasts numerous remnants of the regions former wealth and power, most notably some of France’s most elegant medieval and Renaissance buildings. And it also has mustard. Lots of it.

One of the more picturesque streets in Dijon is the street I called home for my time in the town, Rue Verrerie. The street is lined with lavish townhouses, some of which are half-timbered, with storeys projecting over the street. Others are in more formal and imposing Renaissance stone. A great area of town to be staying. Rue Verrerie, Dijon (

I mentioned Dijon boasts some of the most elegant medieval and Renaissance buildings in France, with its Notre-Dame Church taking top billing (it’s not a cathedral). I paid it a visit, peering for a long time at the three tiers of spectacularly leering gargoyles adorning the church’s front facade, easily its most unusual feature. I also visited Liberation Place, a late 17th century city centre courtyard built facing the former seat of the regions rulers, Palis des Ducs. I also stopped by the impressive Musée des Beaux-Arts, housed in the aforementioned Palis des Ducs. I did all of that, I just didn’t take any pictures. But what I did do was make some observations.

· No freebies
Don’t get me wrong, I can pay my way but the tourist information office in Dijon charges you €2 for a map of the city. €2. For a map. For. A. Map. In Paris they were free. Just saying. And yes I did buy one.

· Summer?
It was 16 degrees Celsius today. 14 yesterday. And raining as the above picture shows. Pretty cold & damp for August.

· Service levels
Service levels in French restaurants or cafés is consistently deplorable, something I’ve noticed since arriving in the country over a week ago – I made similar observations when eating out in Paris and Caen before it. Last night I waited close on 20 minutes after sitting down before anyone came to take my order (the restaurant wasn’t even busy). After eventually placing the order no bread basket or water was brought to the table, which is the norm. When the mains arrived (in an acceptable time, I guess) they came without any sign of the wine or orange juice I had ordered. I had to ask for bread which came, mid-meal, sans butter. Finally, & just as I was finishing the meal, the wine and orange juice arrived. I politely rejected them.

· Knees up
French churches have no pews.

· Beware of hidden costs
The price you see isn’t always what you pay. On more than one occasion I’ve been enticed into a cafe or restaurant based on the prices displayed on the sandwich board outside only to find the actual price is higher than advertised. The €2.50 sandwich turns into a €4 sandwich, while the €1.5 coffee actually costs €2.50. Most recently this happened today, in McDonald’s of all places, showing that this anomaly isn’t just confined to small, independent service establishments. The board outside advertised the price of an ice-cream cone at €1. Purchasing one saw me get €0.50 change out of a €2 coin.

So, I found a few things to complain about in Dijon, where I basically took it easy. It’s a quiet place, nice to walk around and easy to relax in, just what I needed after a few hectic days in Paris and my arrival in Switzerland, my next stop. Oh, and just in case you’re wondering. Yes, it is Dijon as in the mustard. Seemingly it’s the mustard capital of the world.