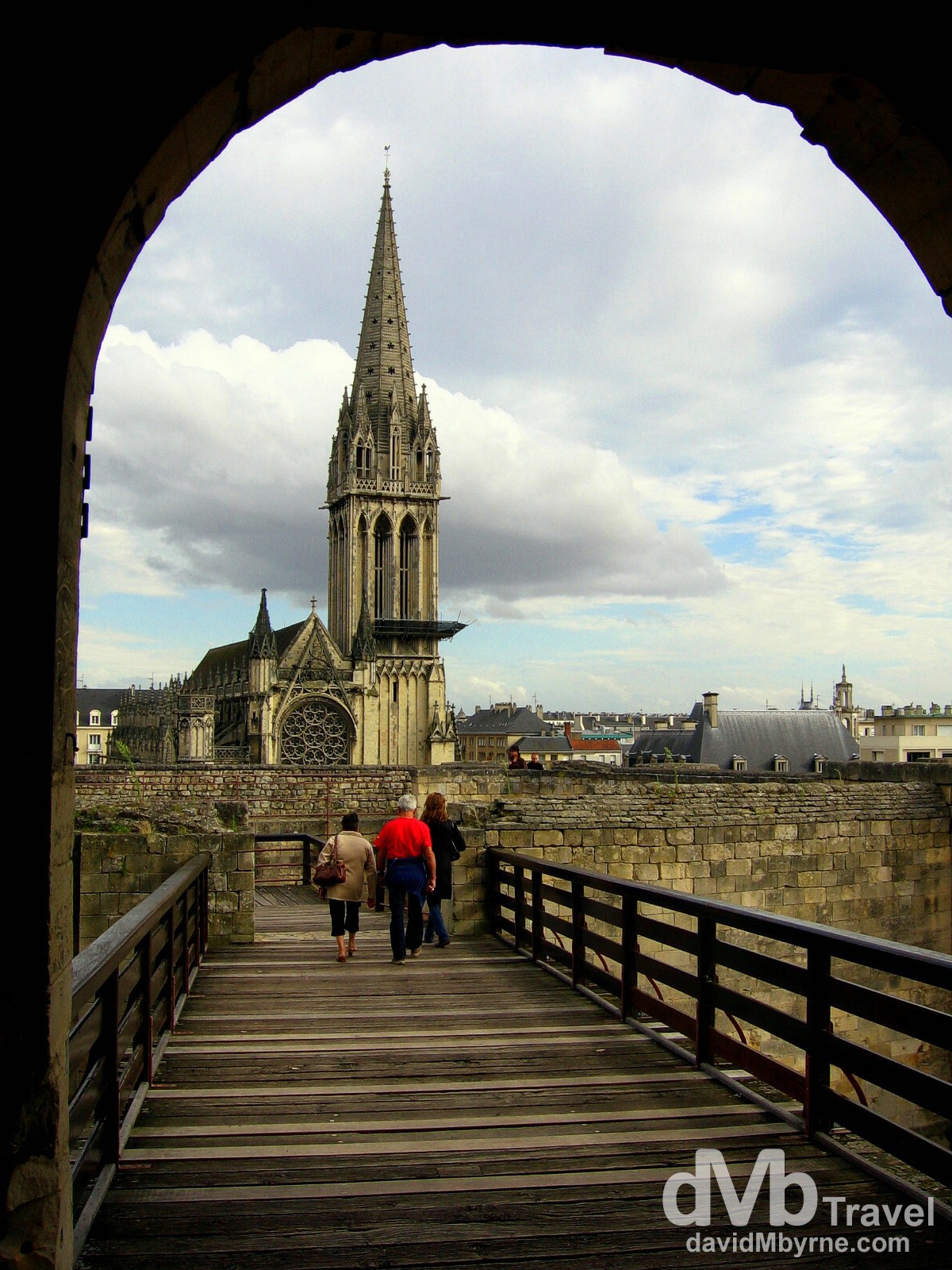 Caen is the capital and largest city of Basse Normandie, one of the 26 regions of France. It’s the city that nine hundred years ago was the favoured residence of William the Conqueror. He liked it so much that he made the city the capital of Northern Normandy before setting about building a massive castle and a few Abbeys. Today the city boasts an impressive ring of ramparts (but they unfortunately no longer have a castle to protect), numerous churches and the aforementioned Abbeys, with the Abbey of Saint-Etienne, a.k.a. Abbaye aux Hommes, one of the most notable Romanesque buildings in Normandy & where William the Conqueror is buried, taking top billing. I spent this afternoon, my fist in town having arrived this morning off the overnight ferry from Rosslare in Ireland into Cherbourg, walking around the castle grounds and the pedestrian precincts of the compact downtown area.

Walking a section of the ramparts the Château Ducal complex in central Caen. Built in around 1060 by William the Conqueror to house his residential palace, the Château Ducal is one of the largest fortified enclosures in Europe. While the walls themselves are impressive, and offer fine views over the city, there’s not all that much to see in the enclosure – the castle the walls once protected is long since gone and only remnants of its stone foundation remains to this day. In the distance can be seen Caen’s Saint Peter’s Church. Built between the 13th and 16th centuries, the church displays both Gothic and renaissance styles and boasts an 80-metre high spire, its dominant feature. Château Ducal, Caen (

Caen is quiet. Very quiet, especially for summer. There are not too many people on the streets, be they locals or otherwise. And those who are here seem a bit unsure as to what a backpacker is – I drew some strange & prolonged stares from the few people I passed on the streets today when making my way from the train station to my hotel, the small but quaint Hotel St Etienne.

Cherbourg
I only passed through Cherbourg (

), 200 kilometres east of Caen, earlier today, gracing it with my presence for about as much time as it took me to get from its port to its train station. It – Cherbourg – has little to entice the average traveller especially those, like me, entering the country. But it does still has some history. For a period during the 1944 D-day landings it was the busiest port in the world. No doubt that would have impressed Napoleon, that small French general guy who, the odd military disaster aside, is widely regarded as one of the greatest commanders ever to have lived. He inaugurated the transformation of Cherbourg’s rather poor but perfectly situated natural harbour into a major transatlantic port by means of massive artificial breakwaters. An equestrian statue in the harbour commemorates his boast that in Cherbourg he would “recreate the wonders of Egypt”. Not quite – the closest pyramid is to be found no nearer than in the courtyard of the Palais du Louvre (Louvre Palace) in Paris – but he did succeed in providing the city with one of the biggest fortified harbours in the world.