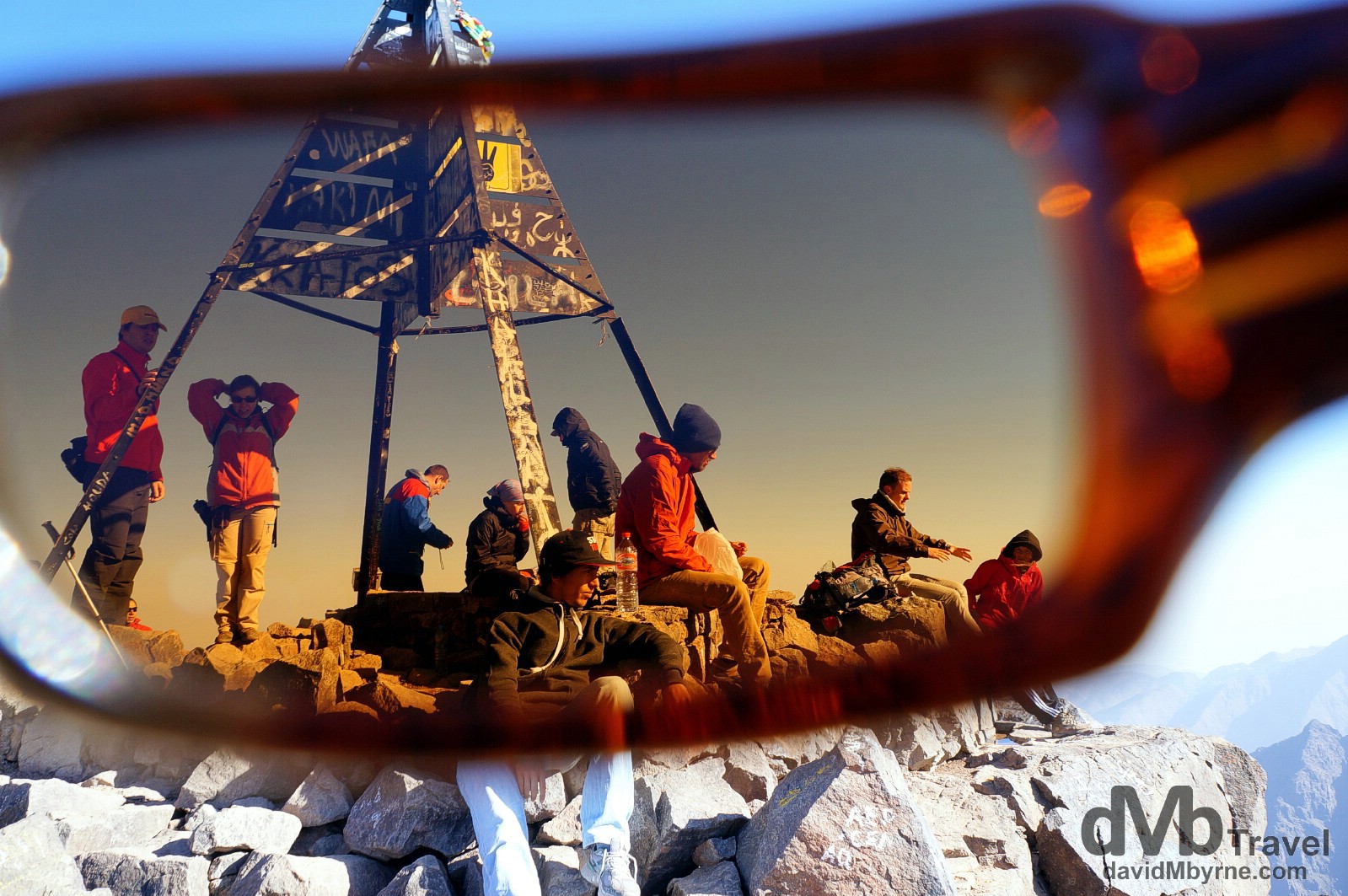 I made it to Imlil in central Morocco. A 90-minute, 300 dirham (€27) taxi ride from Marrakesh is all it took. That 300 was split down the middle with Zach from Colorado, my new best friend who I’ll be hanging out with here in the mountains. We went for a walk in the hills around the village this afternoon looking for waterfalls, at far-off snow-speckled peaks & down pretty valleys. 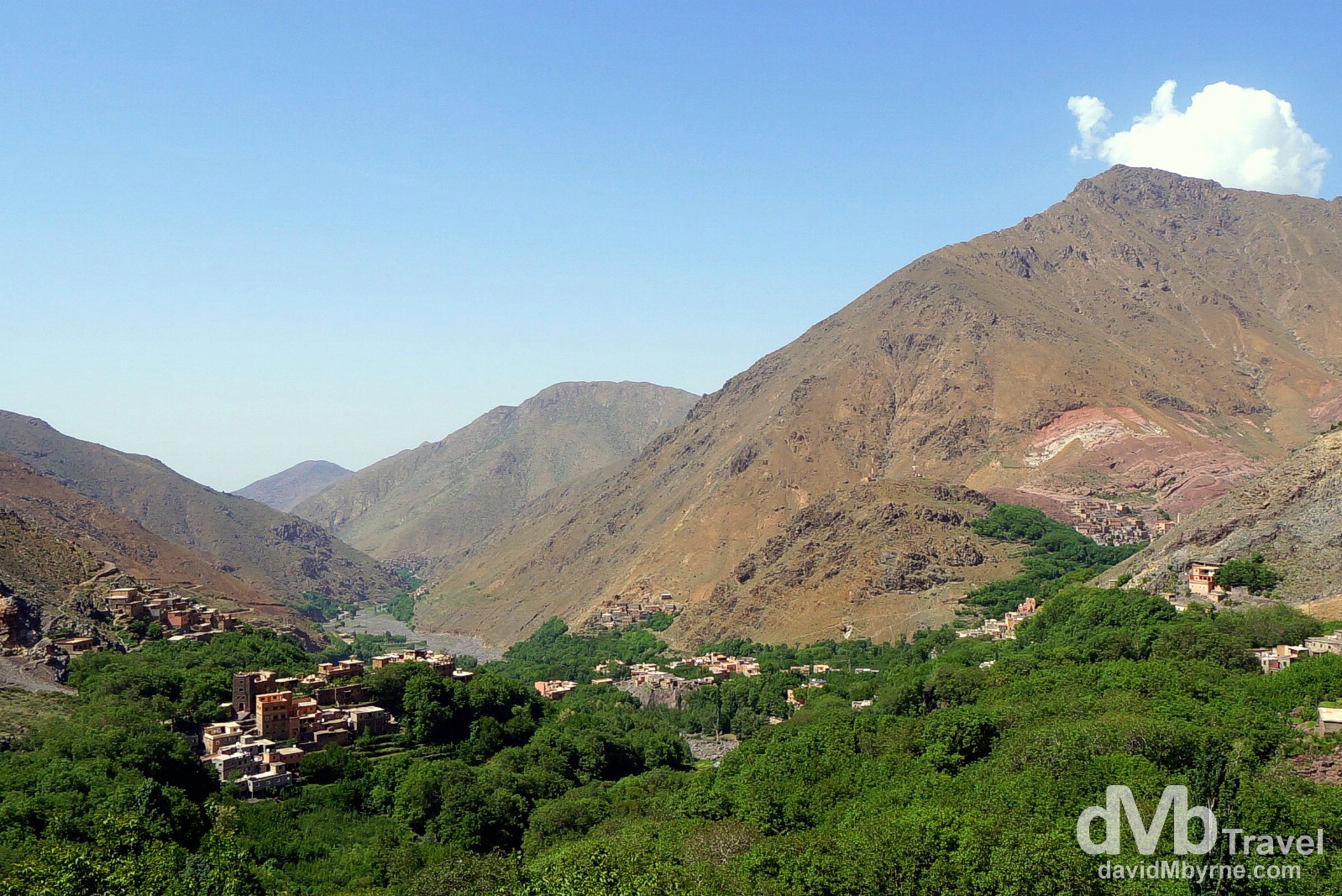 The village of Imlil (

Made it to #Imlil #morocco where one is requested to show respect. #dmbtravel #travel #TravelPhotography pic.twitter.com/itMeQDLIMY

As expected, it is cooler here at 1,740 metres in Imlil than it was in Marrakesh but not markedly so. I guess I gotta get higher really feel the chill. Speaking of which, tomorrow I’m setting out from here on the overnight hike up the 4,167-metre high Jebel Toubkal, North Africa’s highest peak. There is snow up there but not a lot, so I’ve been told – I can’t actually see the peak from here in Imlil. The 22-kilometre round-trip hike from Imlil to the summit & back is an advertised at 11 to 14-hour excursion – 4 to 6 hours to the overnight location of somewhere called Toubkal Refuge (tomorrow, day 1) and another 7 to 8 hours to summit & return here to Imlil (day 2). The whole thing sounds eerily similar to the 17.5-kilometre overnight trek up 4,095-metre high Mount Kinabalu, in Malaysian Borneo that I completed in late-June 2012, although the Jebel Toubkal trek is longer (by almost 5 kilometres), to a higher elevation (by 72 metres) & with a higher start-to-summit ascent (by 198 metres). Oh, and Jebel Toubkal has snow. Not much mind, but it has snow. I’m looking forward to it. Camera batteries are charged and I’m well rested. Pictures and aching legs to follow in the coming days.

I’m back in Imlil, back from the 4,167-metre summit of Jebel Toubkal, the highest point in North Africa. The last 30 hours or so hiking in the High Atlas, a trekkers paradise & one of Morocco’s most remote & beautiful regions, have been tough going but worth every slip, every (almost) sprained ankle & each & every bead of sweat. 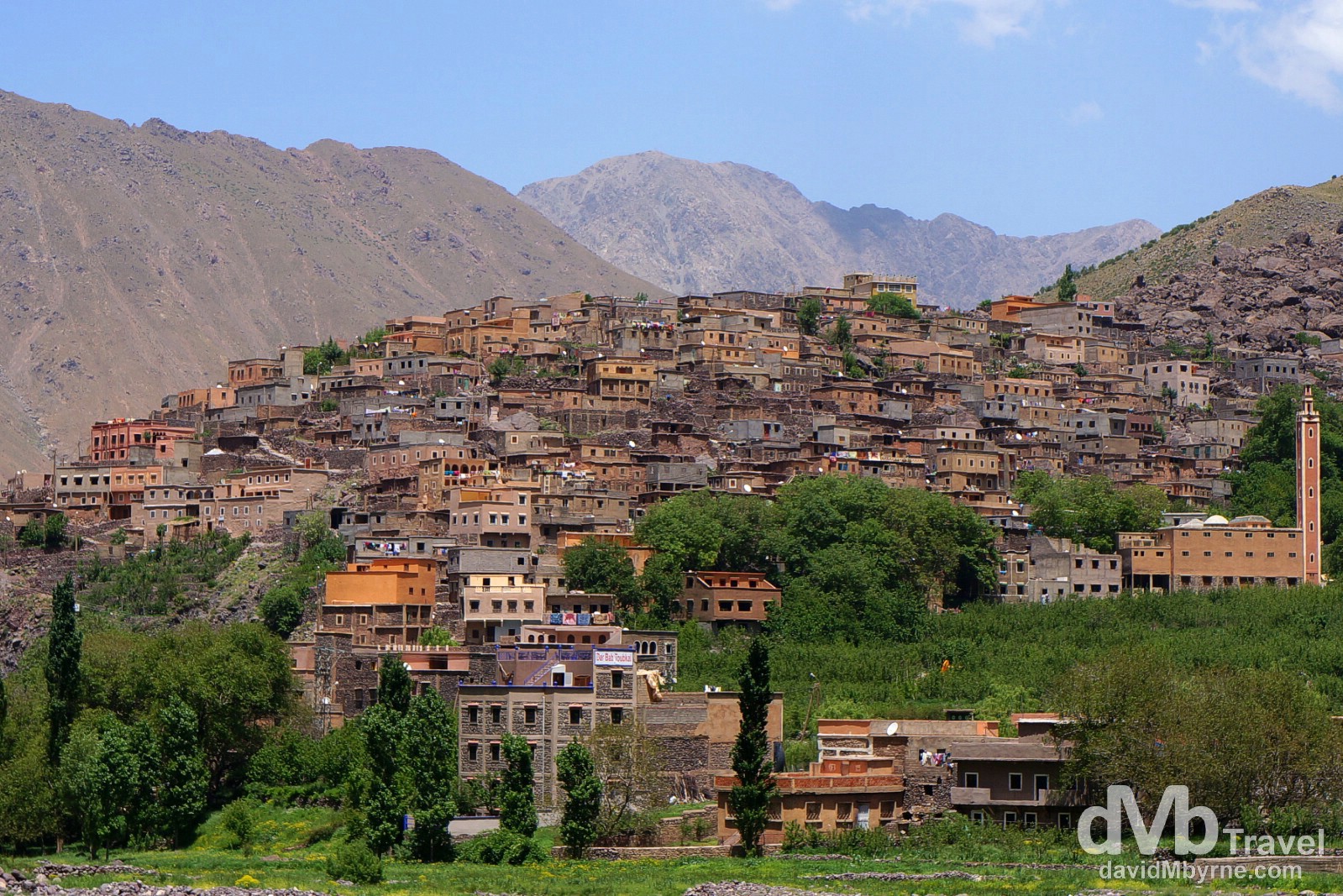 The village of Aroumd as seen from the Mizane Valley, central Morocco. Aroumd, sitting at the beginning of the broad, stony Mizane Valley leading to Jebel Toubkal, is the first & largest of the villages that hikers pass through after leaving the trek trailhead in Imlil. Although wild & harsh, this area of the High Atlas mountains, only accessible by road since the early 20th century, has been long inhabited by Berbers, the original inhabitants of Morocco & their descendants. Berbers call the High Atlas Idraren Draren (Mountains of Mountains) & their flat-roofed, earthen villages seem to grow out of the mountainsides which they share with terraced gardens of cherry & walnut trees – this view of Aroumd shows how the village was built on a huge moraine spur above the valley at 1,840 metres, a pretty amazing sight early into the trek. I interacted with a few jovial & inquisitive Berber men in a small village halfway into day 1 of the Jebel Toubkal hike. Taking a break with a glass of freshly squeezed orange juice (10 dirhams, €0.90), they were quick to point out that their orange juice is the real deal – nothing but oranges – whereas the stuff peddled elsewhere by Moroccans of Arab or European descent, the majority of the 30 million Moroccan population, would be an inferior, watered-down product. May 10th 2014 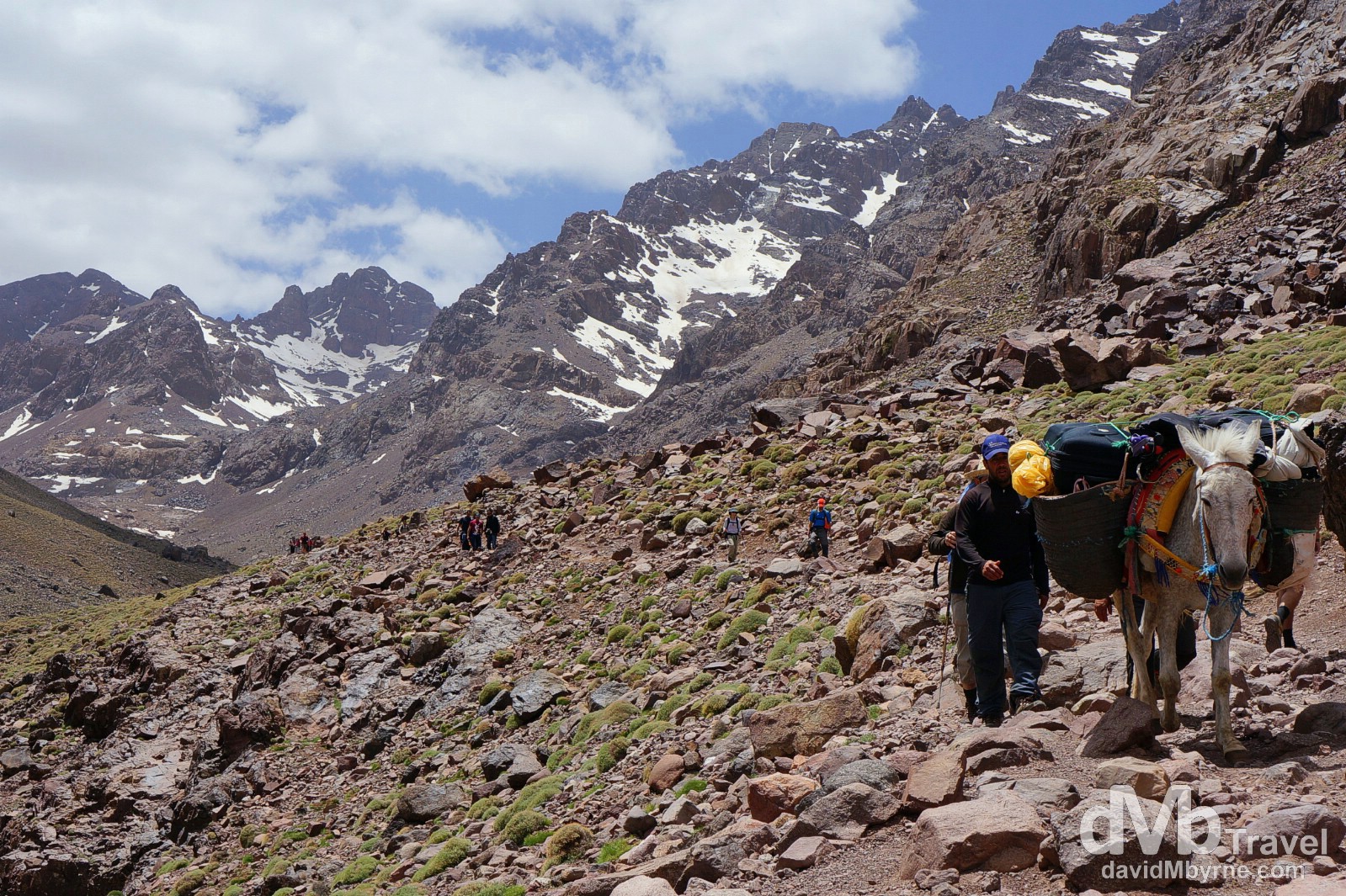 This picture was taken a little over three hours into the day 1 hike and only some 30 minutes short of the overnight refuge, located further up the barren, rocky valley seen here. Mules are a common sight on the trail, carrying supplies between villages and to/from the refuge itself. They don’t stop for anyone and you best get out of their way or you could be bumped off the trail. On the Jebel Toubkal trek in the High Atlas Mountains in central Morocco. May 10th, 2014

I reached the Toubkal Refuge, the end point for day 1, at 1:50 p.m. having set out from Imlil at just after 10 a.m. I was quickly reminded how restless a traveller I can be – I was bored within a few minutes of arriving & after securing a bed for the night I was quick to take myself and my camera to a point further up the valley beyond the refuge to pass some time. I sat there at the top of the valley, all Green Giant like, listening to music, reading about & deciding where next to go in Morocco, all the while eyeing with dread the almost-vertical scree slope to my right that I would have to surmount in black darkness the following morning when I resumed the hike to the summit. 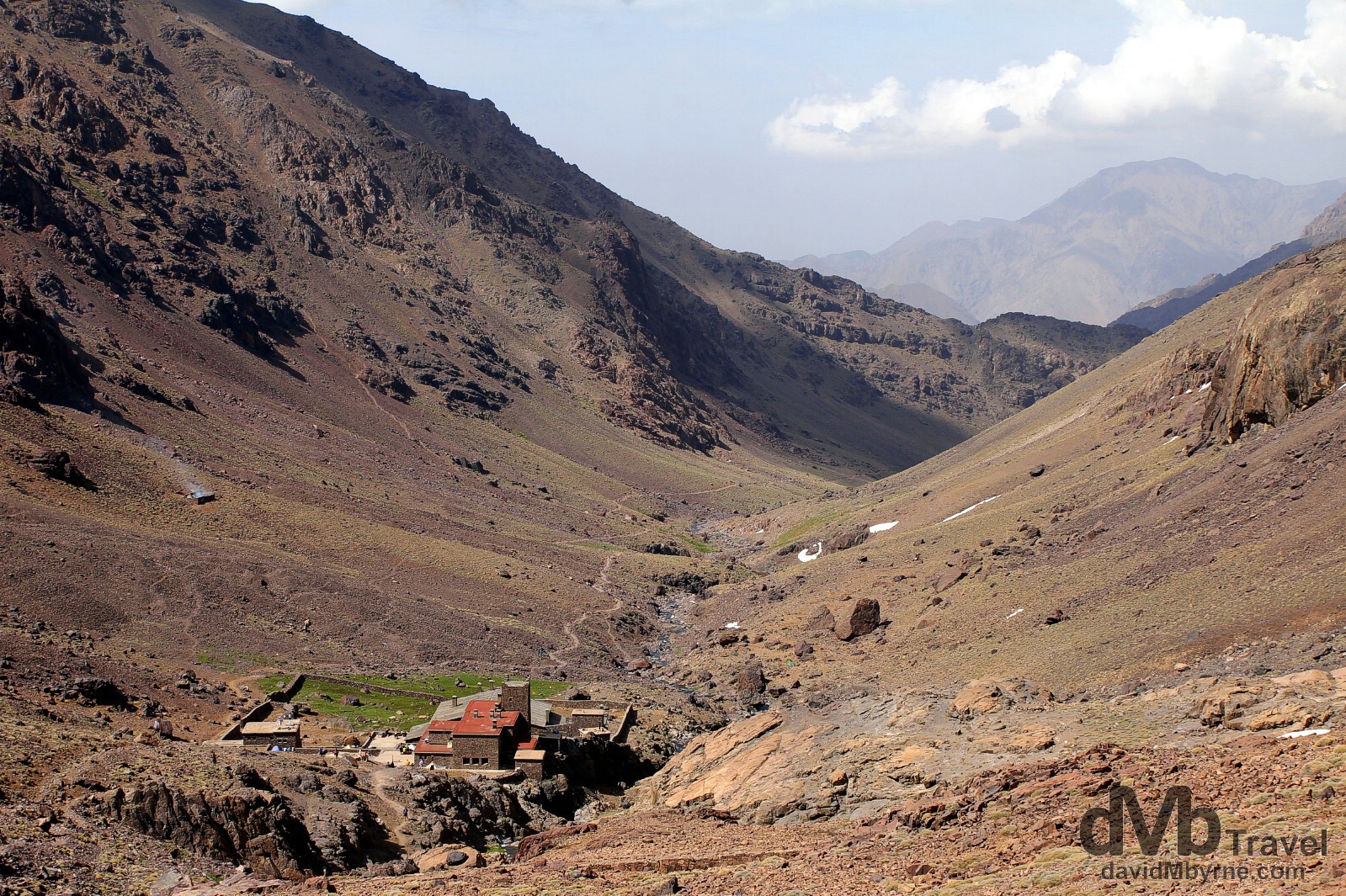 The Toubkal Refuge, seen here from a position looking down the valley I had walked up earlier in the day, sits below the western flank of Jebel Toubkal (the summit is not visible from the refuge). At 3,207 metres, the refuge often marks the spring snowline – seemingly the total absence of snow, save for sporadic spots, in mid-May, both here & on the summit, is unusual. Open all year, the refuge offers 90 dirham (€8) beds, meals, hot showers, sitting rooms and self-catering kitchens. I was in bed at 9 p.m. with my alarm set for 5 a.m. The Toubkal Refuge sitting in the valley leading to the summit of Jebel Toubkal, High Atlas, central Morocco. May 10th, 2014 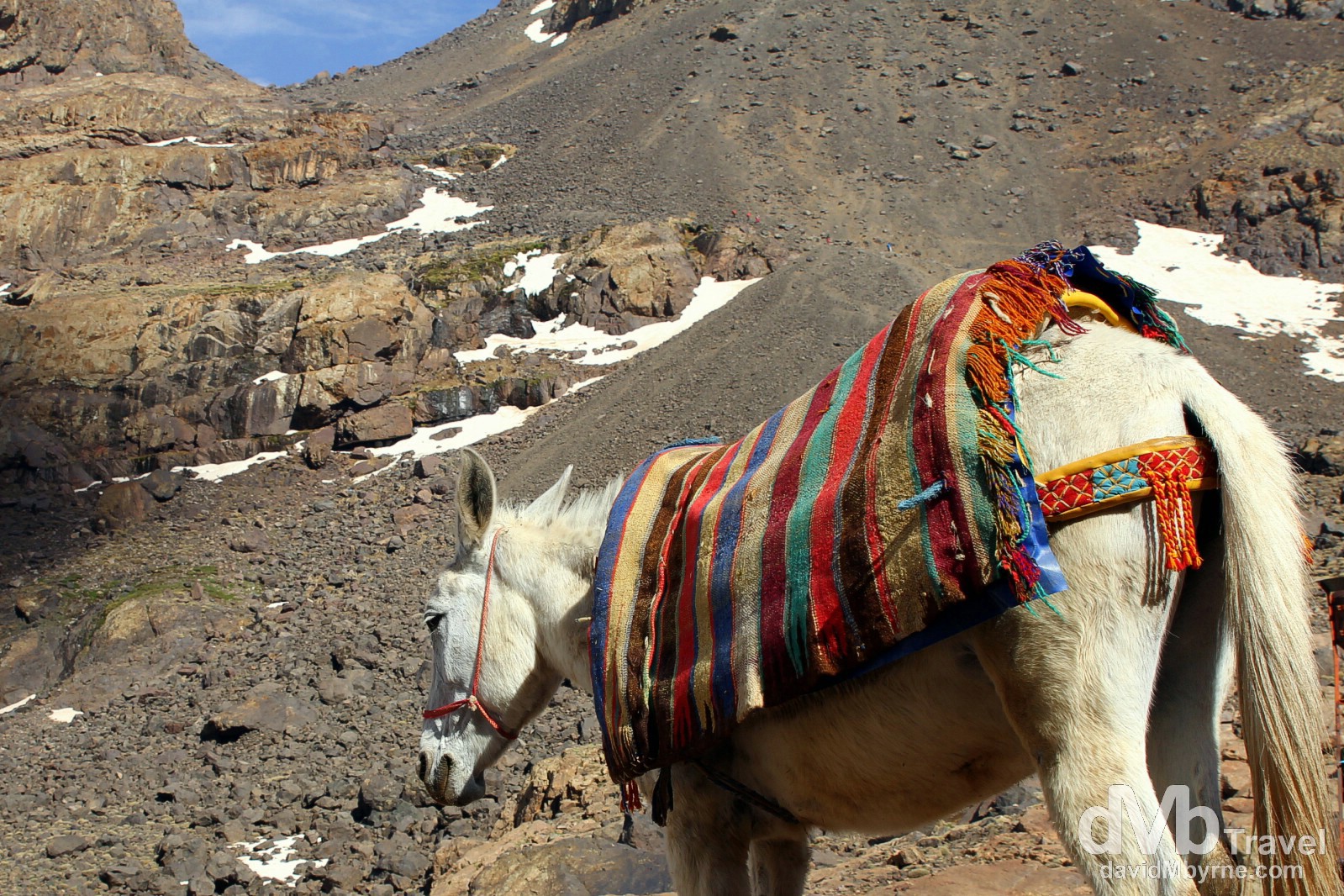 A mule in front of the Toubkal Refuge, as far as mules go on the Toubkal trek route as the paths beyond are too steep for them. Not so for humans. In the distance is the almost-vertical scree slope trekkers need to tackle first thing on day 2 of the hike. The accent on day two is one long, long slog from the refuge to the summit through many loose rock & boulder fields & steep scree slopes. The unforgiving scree slope by the refuge the toughest of the lot, made all the more difficult by the fact that most hikers, me included, tackle it in darkness in a bid to get to the summit early. High Atlas, central Morocco. May 10th, 2014

Having set out at 5:30 a.m., I reached the summit at 8:10 a.m., very glad to do so. It took over an hour to get over the scree slope visible from the refuge (I was about half ways through my struggle with said slope when the ambient light was sufficient for me to dispense with my iPod torch which I had been using to light the way up to that point) & another 1 hour 40 minutes to reach the summit once it came into view from the top of the scree slop – it was/is relentlessly uphill the whole way & slow going given the slope, the terrain & the altitude.

A sloping plateau of graffiti-decorated stones marked by a rather crude, half-finished-looking metal pyramid greets the trekker at the summit of Jebel Toubkal, the highest point in northern Africa. This picture, captured through my sunglasses, was taken at 9 a.m. by which time I had been joined on the summit by many more appreciative trekkers – I was surprised to find I was one of the first to reach the top on this particular day & the serenity up here before the summit got more crowded was awesome. Trekkers at the 4,176-metre summit of Jebel Toubkal (

Needless to say as the highest point in Northern Africa the views are spectacular – mountains stretched for as far as the eye could see. The approach to the summit is up the western flank of Jebel Toubkal, meaning the rising sun isn’t visible until on the summit itself – assuming of course you, like me, climb very early in the morning. 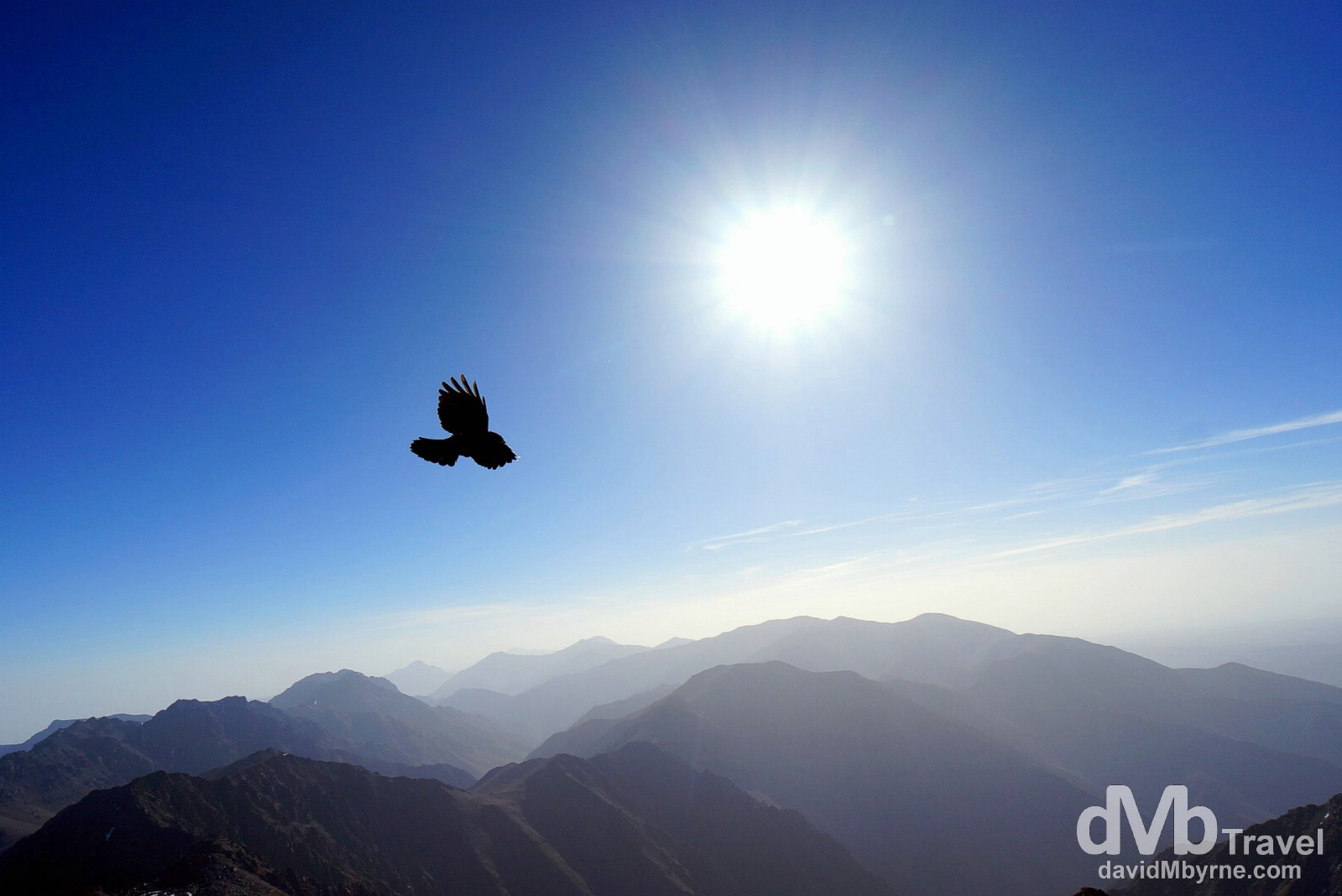 I didn’t mean to capture this bird which no doubt had an easier time of it getting up here than I did; it flew past as I was composing the shot. I’ve stood on a higher point on the earth’s surface (Mauna Kea on the Big Island of Hawaii, the highest point in the Pacific, is at 4,205 metres) but I’ve never before dragged myself to a higher point on earth. Jebel Toubkal, High Atlas, central Morocco. May 12th, 2014 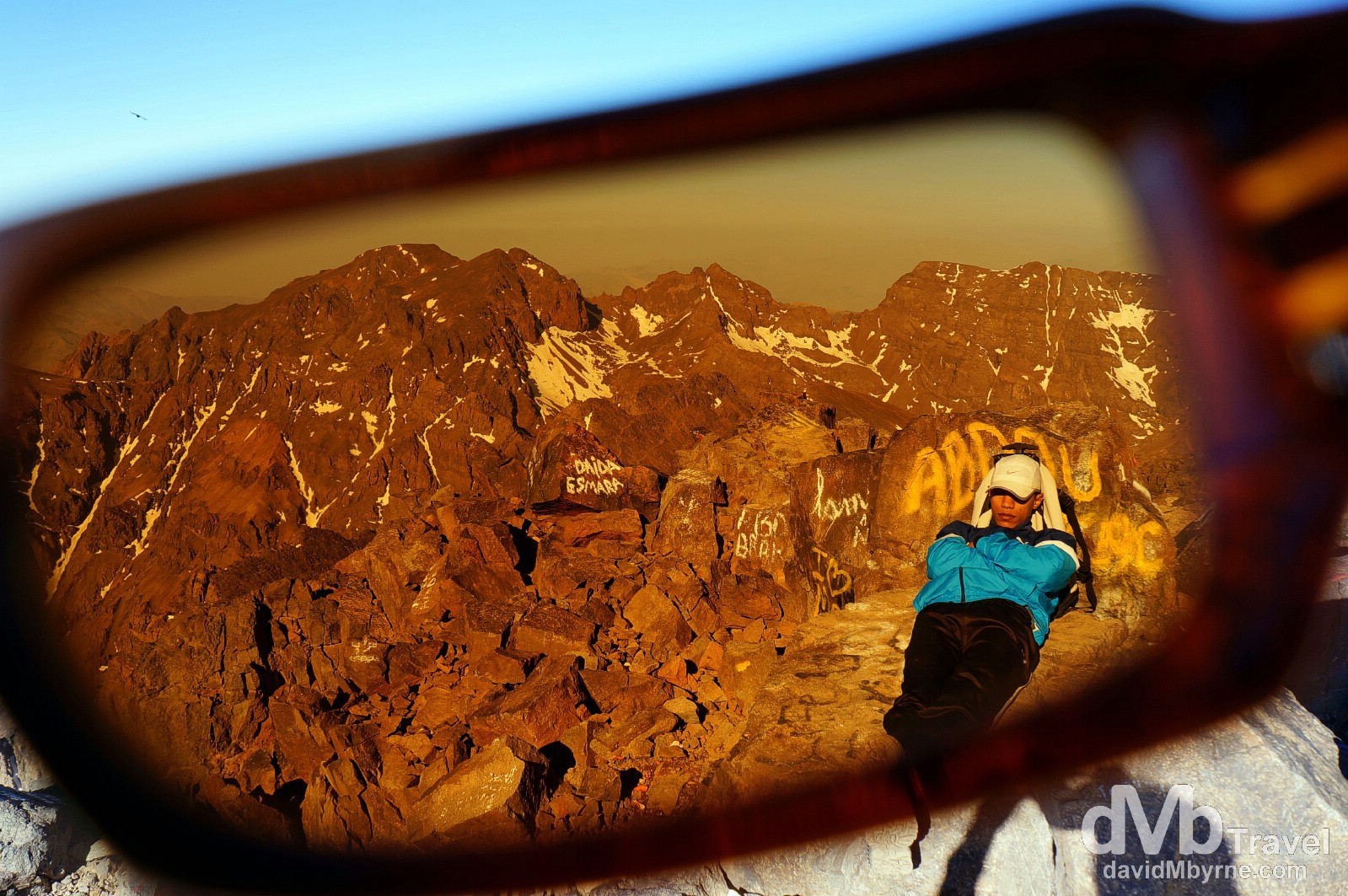 I like this. Some trekkers like to avail of the services of a guide. Personally I don’t think it’s necessary, except maybe in winter when snow makes the summit a real alpine challenge, but each to their own. While mere mortals will huff & puff their way up & down the mountain, guides are capable of running the route (I saw one doing exactly that) & can clock 300 summits in a year. So needless to say guides have seen the view from the summit more than a few times. This guide was taking a few minutes rest while his trekking party were getting the obligatory photo, savouring the views & recuperating ahead of the descent. This is one occupation where you’d not expect to see someone sleeping on the job. Napping on the 4,176-metre summit of Jebel Toubkal, the highest point in Northern Africa. Jebel Toubkal, High Atlas, central Morocco. May 12th, 2014 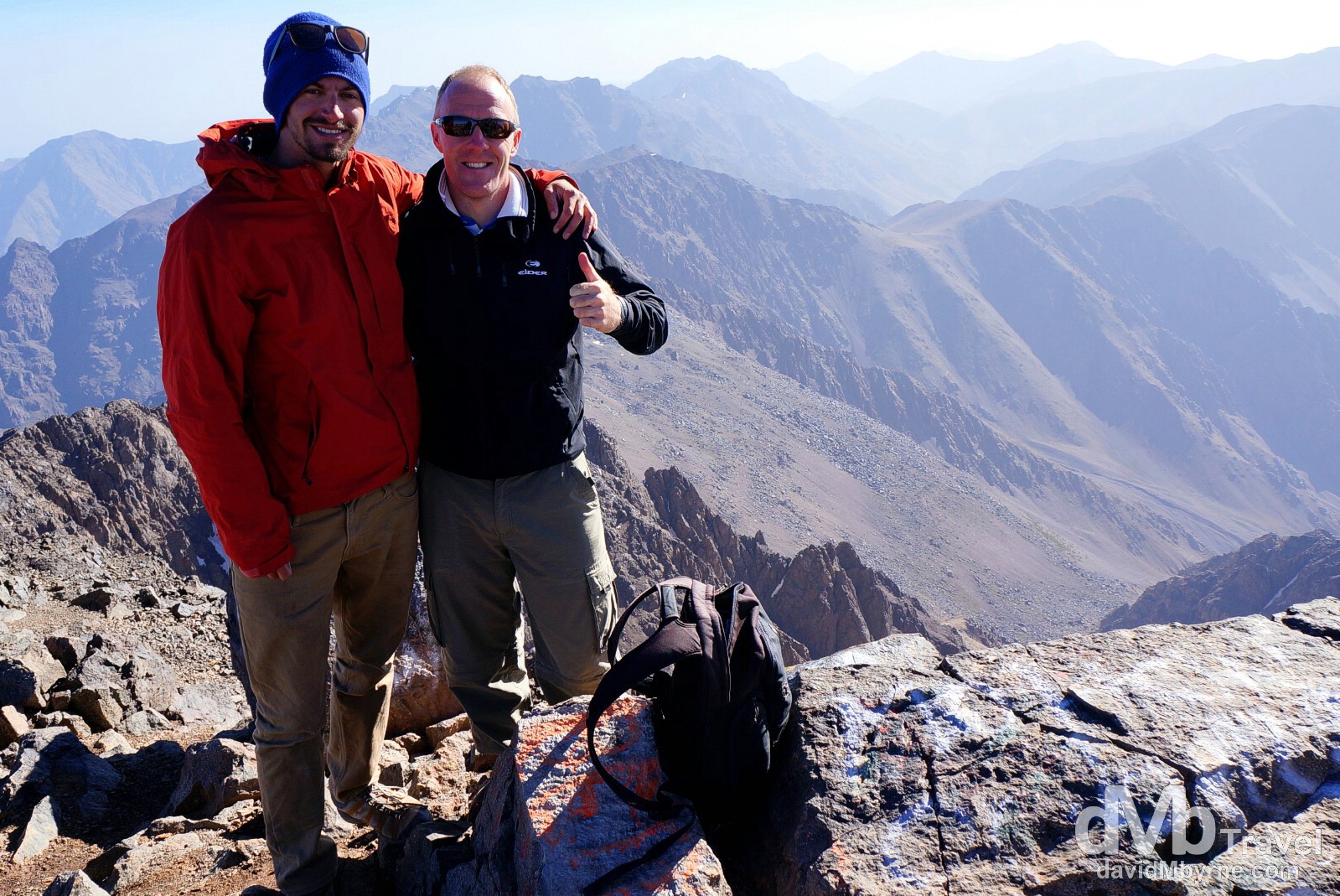 Moroccan besties. I tackled & conquered Jebel Toubkal with Zach, a pretty cool American that I got to share some Moroccan experiences with. On the 4,176-metre summit of Jebel Toubkal, the highest point in Northern Africa. Jebel Toubkal, High Atlas, central Morocco. May 12th, 2014

Four hours twenty minutes of knee-pounding descent is all it took to return to Imlil from the summit earlier today, for a total up & down time of 10 hours 40 minutes for the 22 kilometre trek – Lonely Planet puts an estimate on the trek of between 11 & 14 hours. I took the following picture towards the end of the trek as I was approaching the Mizane Valley, seen in the distance, when I passed a herd of mountain goats, one of which was perched precariously on a rock. 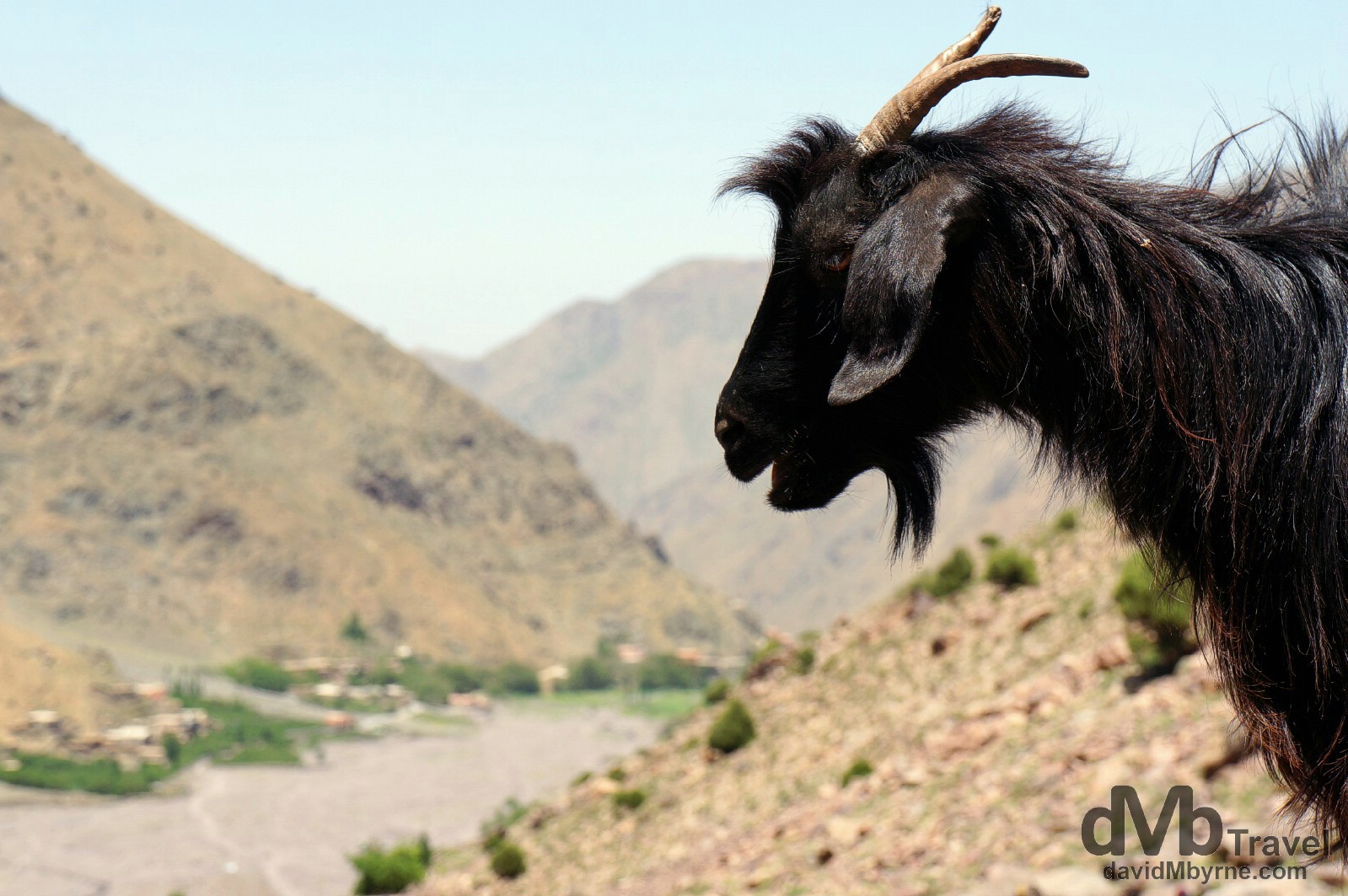 Overlooking the Mizane Valley in the High Atlas, central Morocco. May 12th, 2014

The Pending Hurt
I’m back in Marrakesh now for one more night having decided to come straight back from Imlil after descending from the summit rather than wait around there for the onset of the pain that’s coming. I’m banking on walking gingerly tomorrow and maybe not being able to walk at all the day after. I’ll ride out the discomfort in the central Moroccan town of Ouarzazate, my next stop where I’m aiming to arrive tomorrow. I’m heading east towards the desert, which will necessitate me passing over the Atlas Mountains. This time, however, I’ll be quite content with viewing them from the comfort of a CTM bus. Quite content indeed.