Sunset From The Highest Point In The Pacific 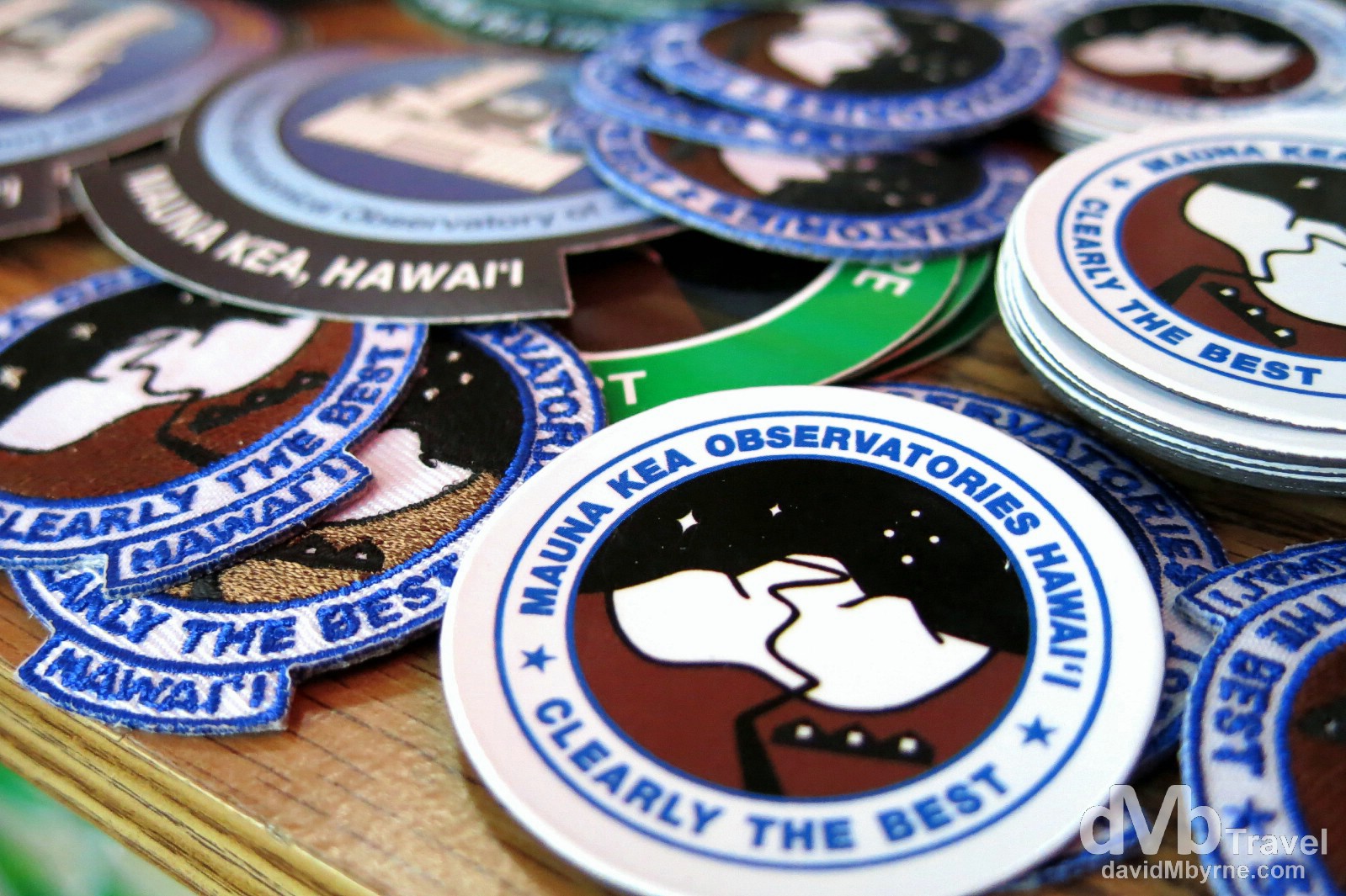 Badges for sale in the Mauna Kea Observatories Visitors Center. The Center, which offers free nightly star gazing sessions, sits at just above 2,743 metres (9,000 ft) near the end of the paved section of the summit road. It’s recommended 1) that people stop here for at least 30 minutes to acclimatise for the summit, & 2) they go no further than the Visitors Center in anything other than a 4-wheel drive vehicle – it’s a slow, windy 40-minute drive to the summit via a (mostly) steep dirt road. Or you could just do what I’ve done not once but twice now – take your chances in a 2-wheel drive hire car. Hey, fortune favours the brave. The Mauna Kea Observatories`Visitors Center on Mauna Kea (

The following pictures were all taken during the almost one hour I spent at the summit of Mauna Kea having thanked Madame Pele, the Hawaiian goddess of nasty stuff (fire, lightening, volcanoes & wind), for getting me there in my 2-wheel drive Ford Focus. I’d been here before back in 2003 so I should have been better prepared – it was cold & I was freezing but the vistas were sublime & they warmed me up somewhat. I wasn’t able to put too much effort into photography up here – all these images were basically point, shot & pray, again to the aforementioned goddess, for a good result. 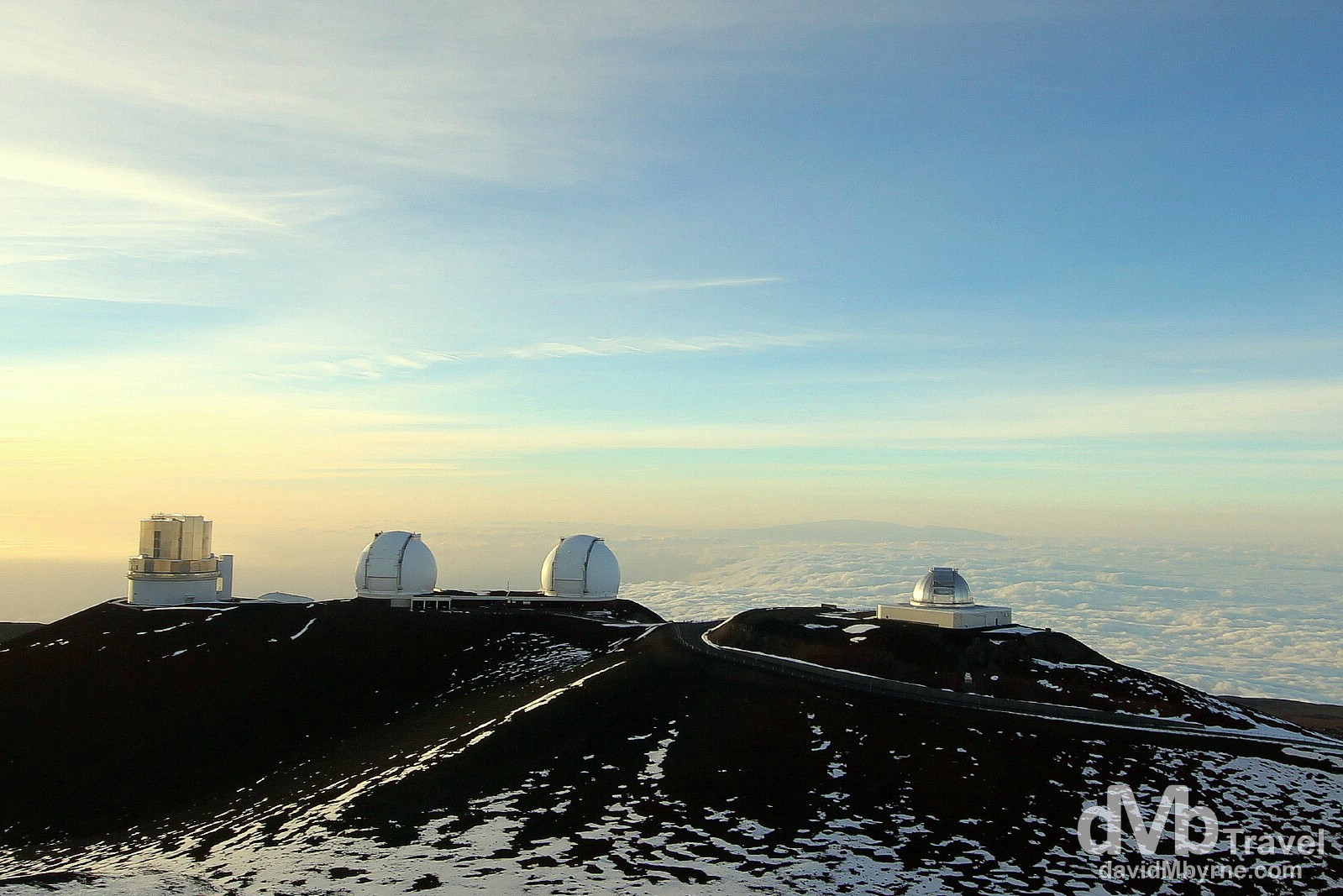 With its high altitude, isolation, dry environment, and stable airflow, Mauna Kea’s summit is one of the best sites in the world for astronomical observation. As a result the summit is home to the greatest collection of large astronomical telescopes on the planet. Twelve in total dot the arid, oxygen-starved landscape including the world’s two largest optical telescopes – the twin telescopes of the W.M. Keck Observatory, the two matching, golf ball-esque observatories in the centre. My previous summit visit in 2003 saw me here mid-afternoon thus avoiding the sunset crowds I shared the summit with this time around. Back then I was able to snoop around the interior of some of the observatories found here. Everything seemed accessible and I had the summit to myself. On the summit of Mauna Kea on the Big Island of Hawaii, USA. March 3, 2013. 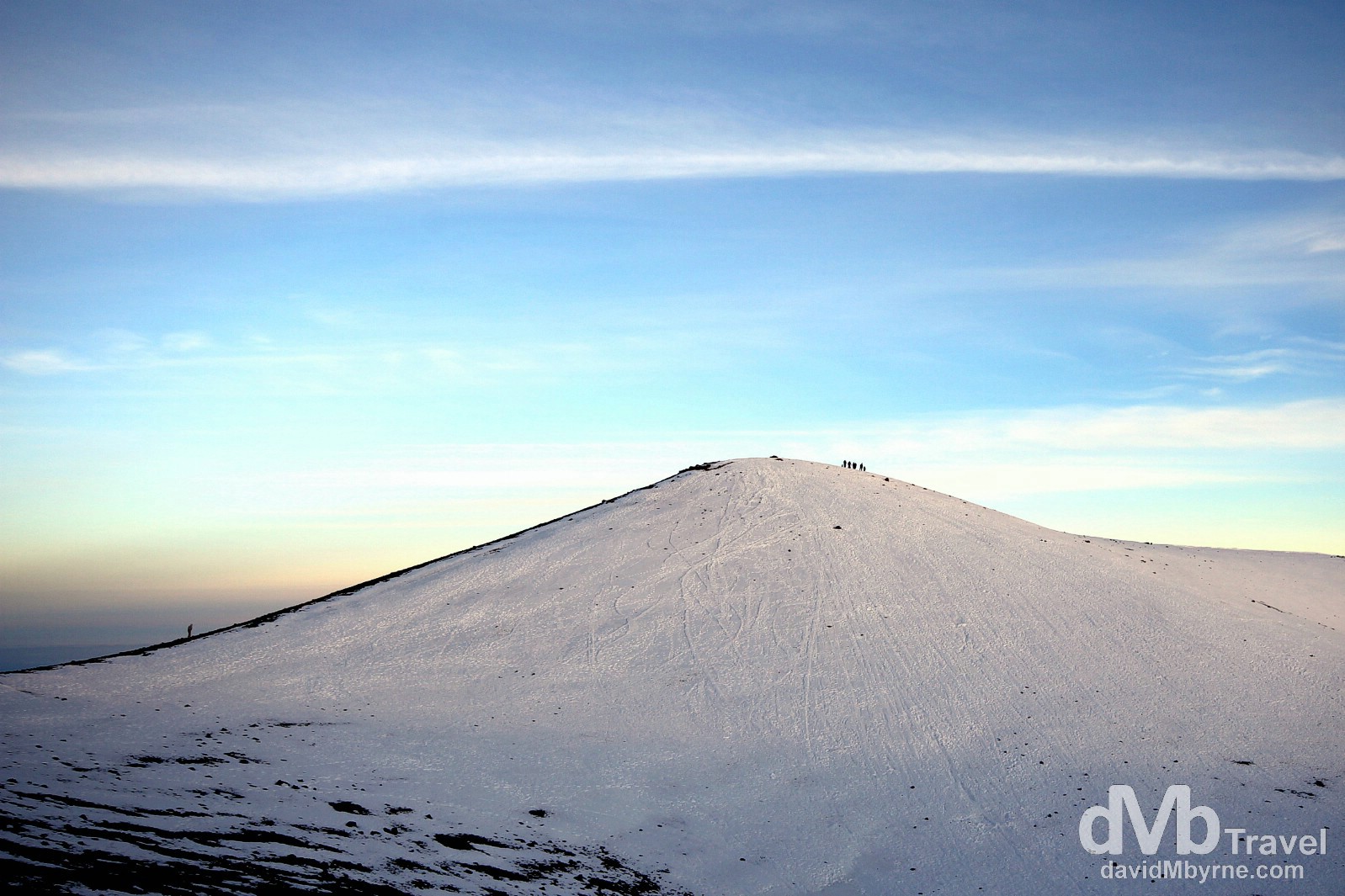 There wasn’t much time to spare between arriving at the summit and sunset. I took this picture en route to the summit of this peak atop a peak, from where I joined those already there to watch the sunset. The wind walking up the ridge seen to the left was intense & the subzero temperatures were torturous, quite the contrast to the 30+ degree Celsius temperatures at sea-level in the coastal town of Hilo some hours earlier (certainly no snow down there). Also, adding to this the fact that atmospheric pressure, & thus oxygen, is 40% less up here than at sea level means the short hike was quite the chore but ultimately worth every gasp of air it took to reach the peak. Mauna Kea on the Big Island of Hawaii, USA. March 3, 2013.

The Polynesians who discovered Hawaii saw snow for the first time when their landfall displayed the white summit of the island’s highest peak, which they named Mauna Kea, ‘white mountain’. Probably the first settlements were along the Humakua Coast, the mountain’s fertile and lush windward side

Information on display in the Mauna Kea Visitors Center. 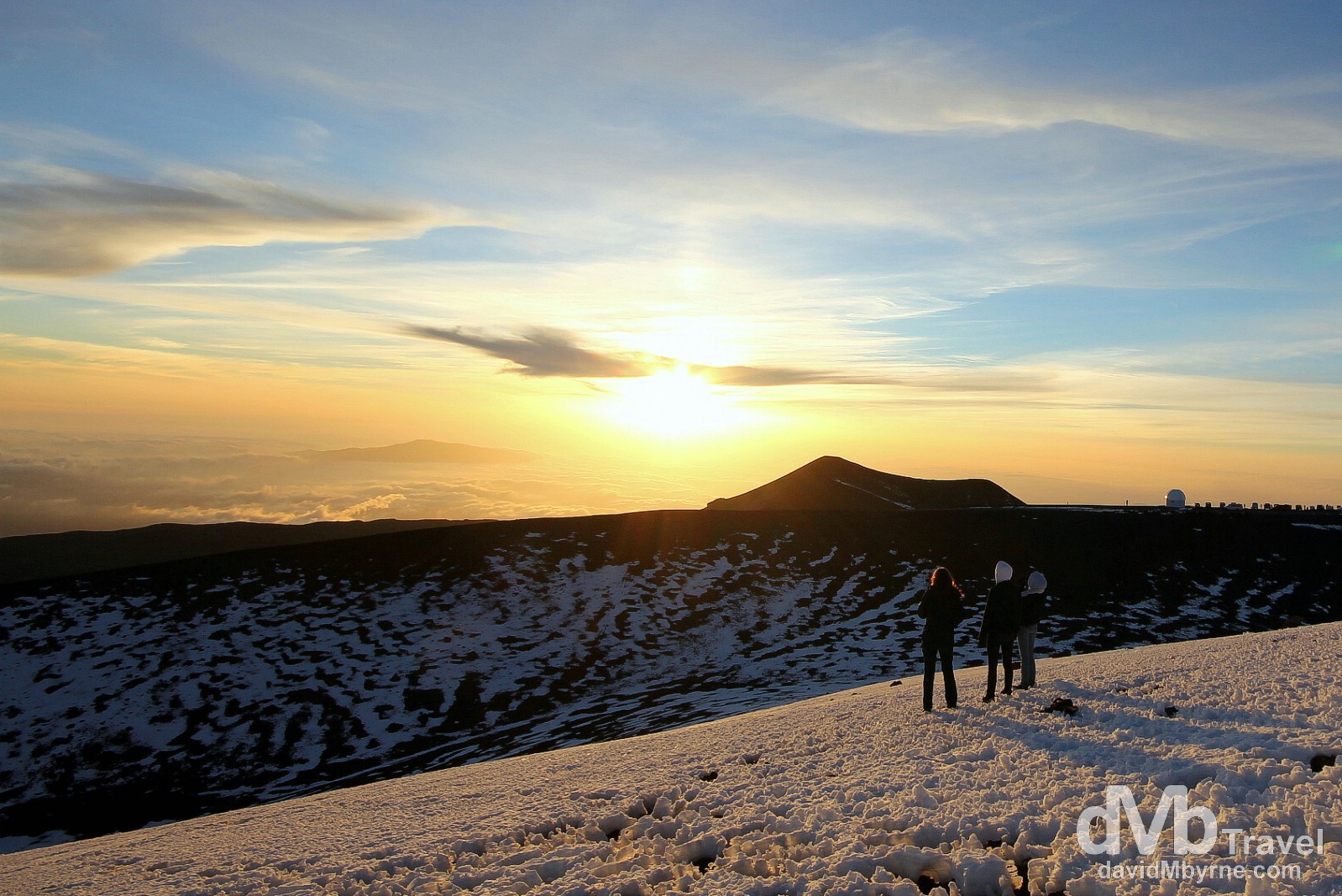 Watching the sunset from atop Mauna Kea. Piercing the clouds in the distance can be seen the summit of Mauna Kea’s Big Island neighbour, Mouna Loa. The active shield volcano, part of which resides in Hawaii Volcano’s National Park, is the largest volcano in the world but its peak, at 4,169 metres (13,679 ft), is some 36 metres (117 ft) lower then that of Mauna Kea. Atop Mauna Kea on the Big Island of Hawaii, USA. March 3, 2013.

Captain James Cook (1728-1779) was one of the greatest navigators of all time. He was the first European to arrive in the Hawaiian Islands. He named them the Sandwich Islands in honor of the Earl of Sandwich.

Cook’s first contact with the natives of Hawaii was in January 1778 on the islands of Kauai and Niihau. A year later on January 16th, 1779, Cook’s ships, the Resolution & Discovery, sailed into Kealakekua Bay here on the island of Hawaii, a.k.a. the Big Island. Mistaken for a God, Lono, he and his men were accorded the highest respect.

Having spent almost a month on Hawaii, the expedition finally left only to be ravaged by a storm at sea. Returning to the island to repair the foremast of the Resolution, the explorers found that their past role as god and honorable servants was now questioned. In a brief struggle to retrieve one of the life boats that had been taken, Captain Cook, four of his sailors & a number of Hawaiians were killed.

Information on display in the Mauna Kea Visitors Center 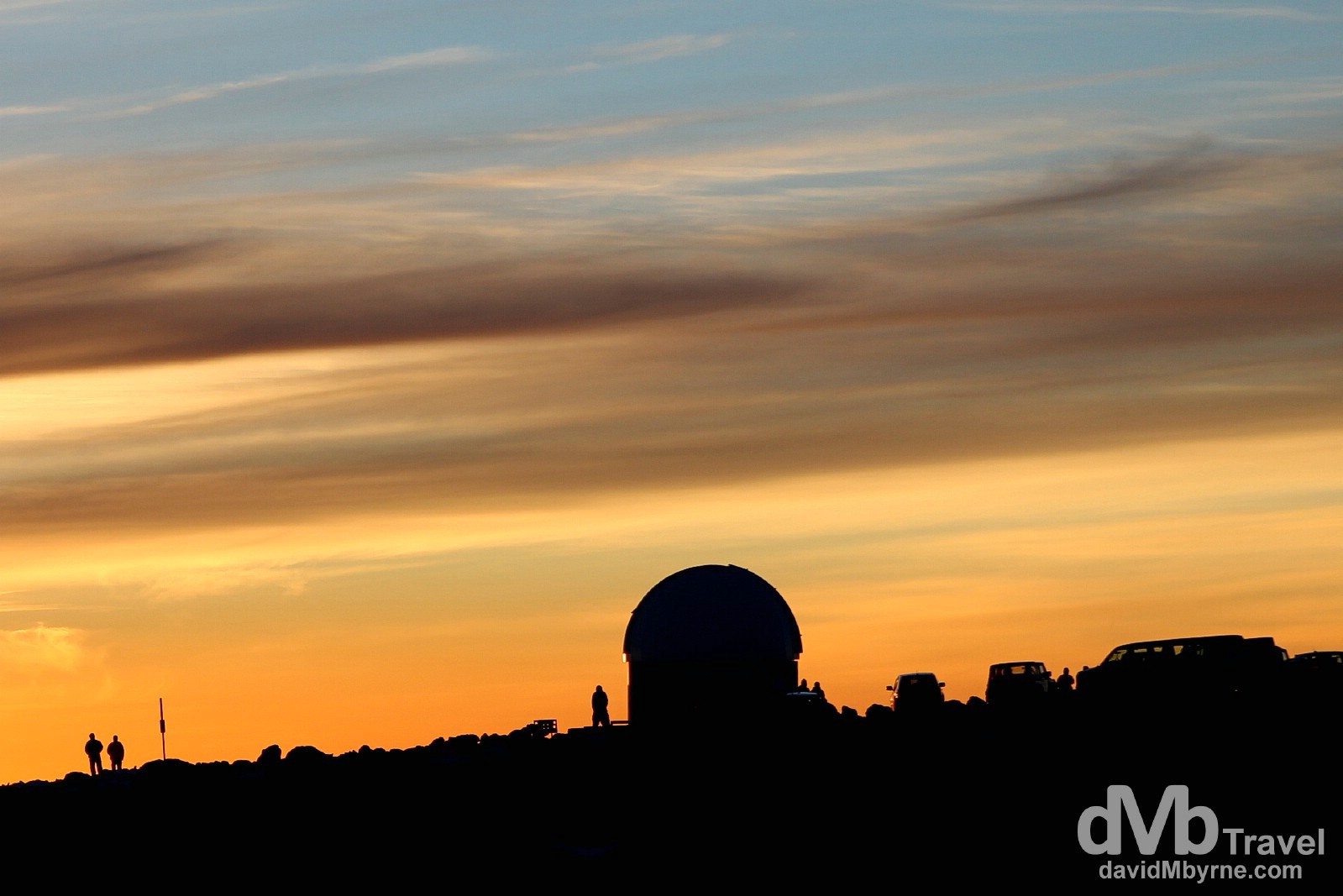 Sunset silhouettes on the summit of Mauna Kea on the Big Island of Hawaii, USA. March 3, 2013.

Mauna Kea || Take II
Having been here before so Mauna Kea was never going to hold any surprises for me. That said, getting back to the summit was always going to be the highlight – no pun intended – of any return to this stunning, isolated part of the world; it – getting back to summit – was the reason I wanted to come back to the Big Island. Some/most travel experiences are best left alone, their memory left untainted. Untarnished. But this was one of those travel experiences worth repeating assuming you’re as privileged as I was to get here even once. God bless 2-wheel drive hire cars.