I‘ve commented a few times over the past few days how life is good. That’s the kind of vibe being here in Hawaii promotes. Today is my third day on Maui, the second-largest of the 8 Hawaiian Islands. It’s the third island I’ve visited on this my second trip to Hawaii, but the only one of the three – Oahu, the Big Island & now Maui – that I hadn’t visited before.

) near the island’s north shore, an area popular with windsurfers. It’s a quiet & secluded part of a quiet island. Just perfect. From there I toured the island in my Dodge Caliber rental – the girl at the car rental desk seemed shocked that I didn’t want a soft top Ford Mustang like everyone else. It – Maui – is green. It’s very lush. And it’s amazingly diverse, especially with regard to its topography – within its 1,800 km² area you’ll find desolate mountains, vast open spaces, sandy beaches & lush green valleys; it’s from the latter that the island gets its nickname The Valley Isle. Here’s a selection of pictures from the last three days of living the good life on Maui.

On day one in Maui I headed to the west of the island, an area formed by a dormant and much eroded shield volcano known to geologists as Mauna Kahalawai but commonly known to everyone else as the West Maui Volcano. A largely inaccessible region mostly now given over to a forest reserve, the West Maui Forest Reserve, the only road out in these parts skirts the coast. First port of call, & after stopping off to view humpback whales breaching the shallow waters offshore, was Lahaina, a small picturesque harbourside town, the historic first capital of the Kingdom of Hawaii (between 1820 and 1845) & a major port for the pacific whaling fleet of the 1840s. 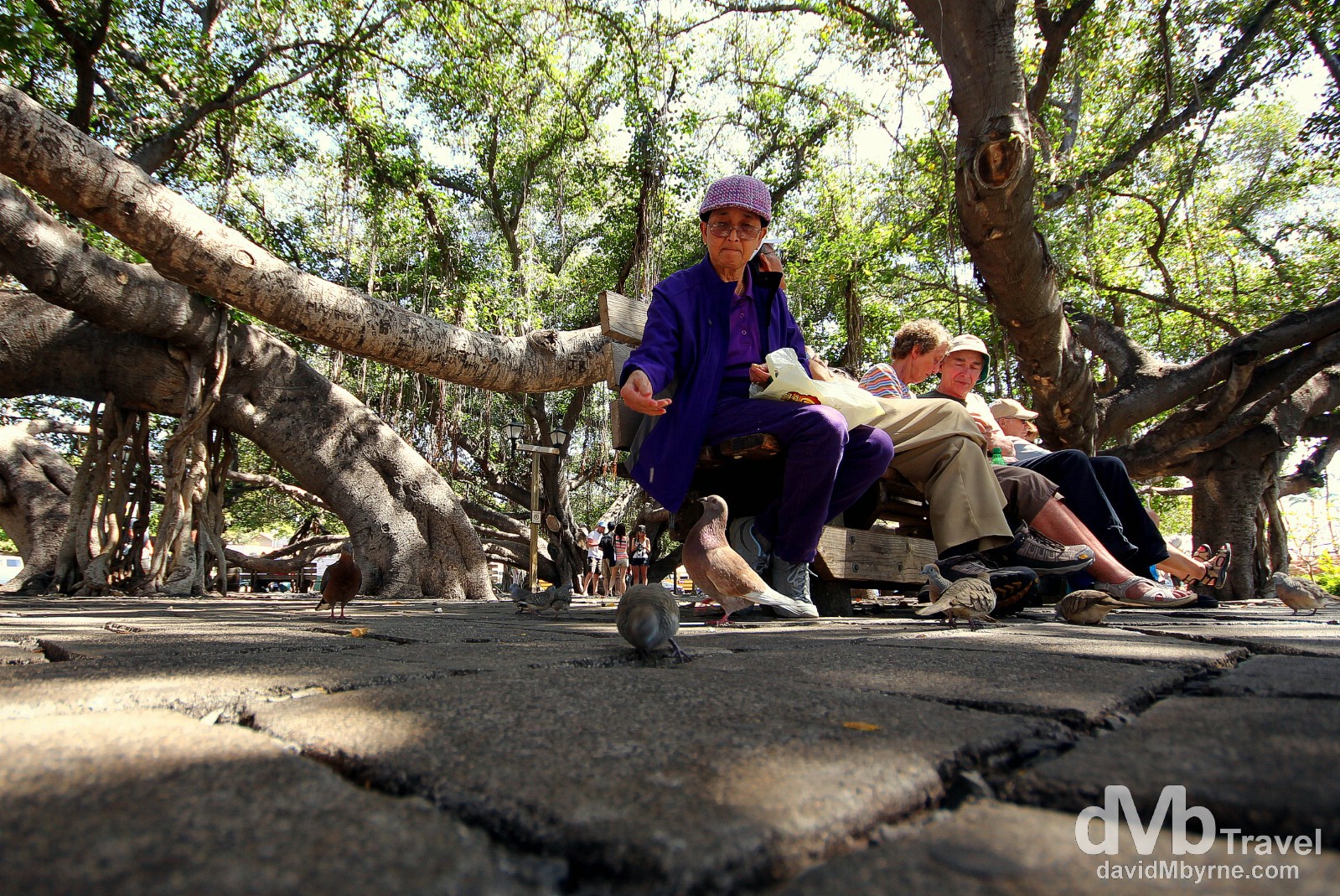 Feeding pigeons under the iconic banyan tree in Lahaina, Western Maui, Hawaii, USA. March 4, 2013. || Although boasting some nicely preserved period architecture, the highlight of laid-back Lahaina for me was its central Lahaina Banyan Court Park. Commonly known as Banyan Tree Park, the town’s central park fronts, among other historic buildings, the 1859 Old Lahaina Courthouse where, on August 12, 1898, the official raising of the Stars & Stripes signaled the Hawaiian Islands becoming a US territory. The park houses the famous Lahaina Banyan. Planted in April 1873, today it is the largest such tree in the US – with the aid of 17 trunks it shades an area of almost 1 acre offering ample shade to help beat the Maui heat. 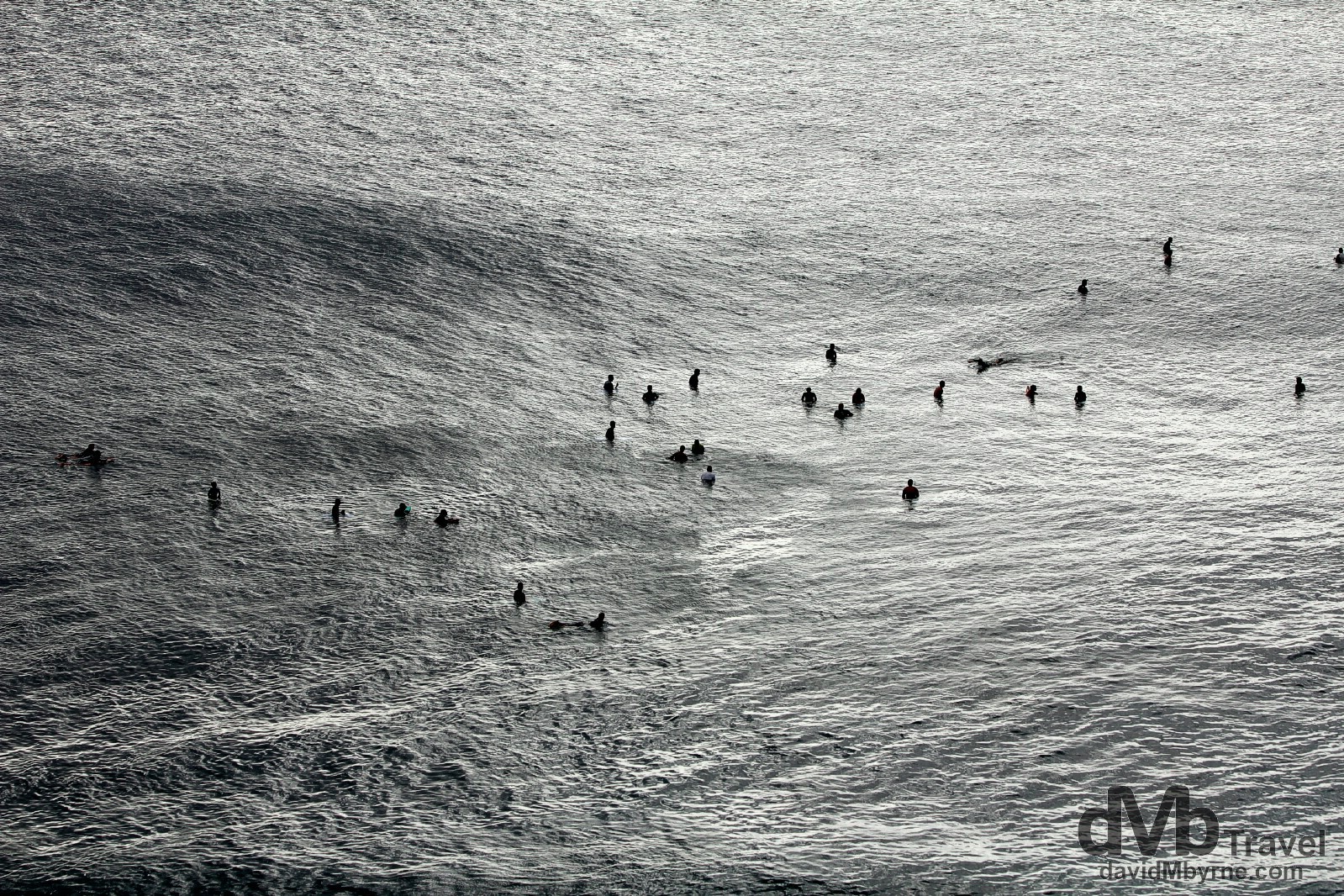 Surfers waiting to catch a wave in Honolua Bay, West Maui, Hawaii, USA. March 4, 2013. || Honolua Bay boasts a world-renowned surf break, a permanent obstruction such as a coral reef, rock, shoal, or headland that causes a wave to break forming a barrelling wave that can be surfed before it eventually collapses (you pick up these titbits when you come to Hawaii, the birthplace of modern surfing). The cliff overlooking the bay provided a great & popular vantage point from which to view the action in the water some distance below. 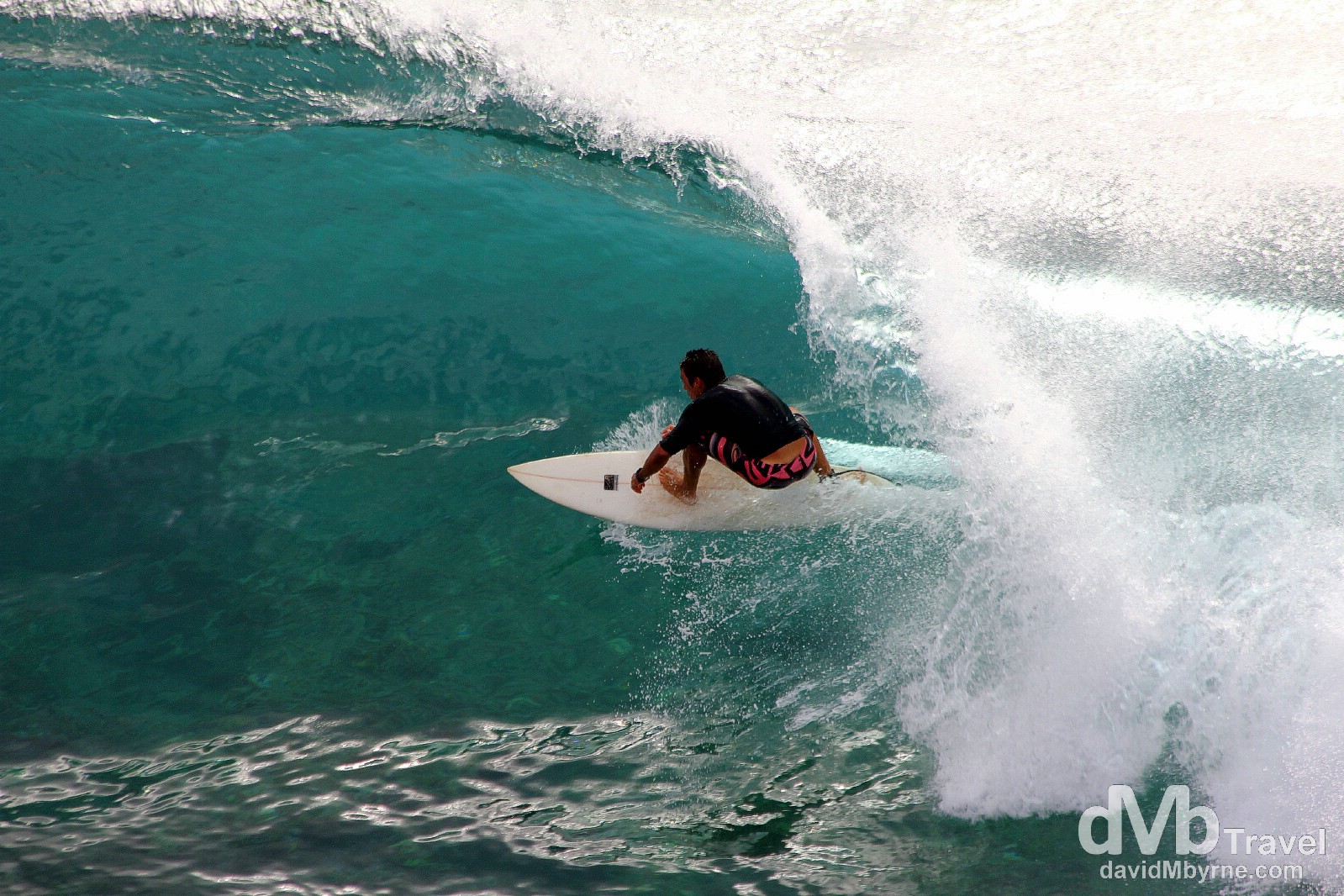 The Challenging Roads Of Maui
Despite its compact size, the topography of Maui offers up more than a few driving challenges, namely the serpentine & barely-fit-for-purpose road of extreme western Maui, the record road accent to the island’s highest point, & the bridges & bends of the famed and spectacular Road To Hana. Yes, Maui really is quite the road-tripping destination, something I never thought I’d say about a remote island in the mid-Pacific Ocean. The first Maui challenge I was to rise to was western Maui’s Kahekili Highway. 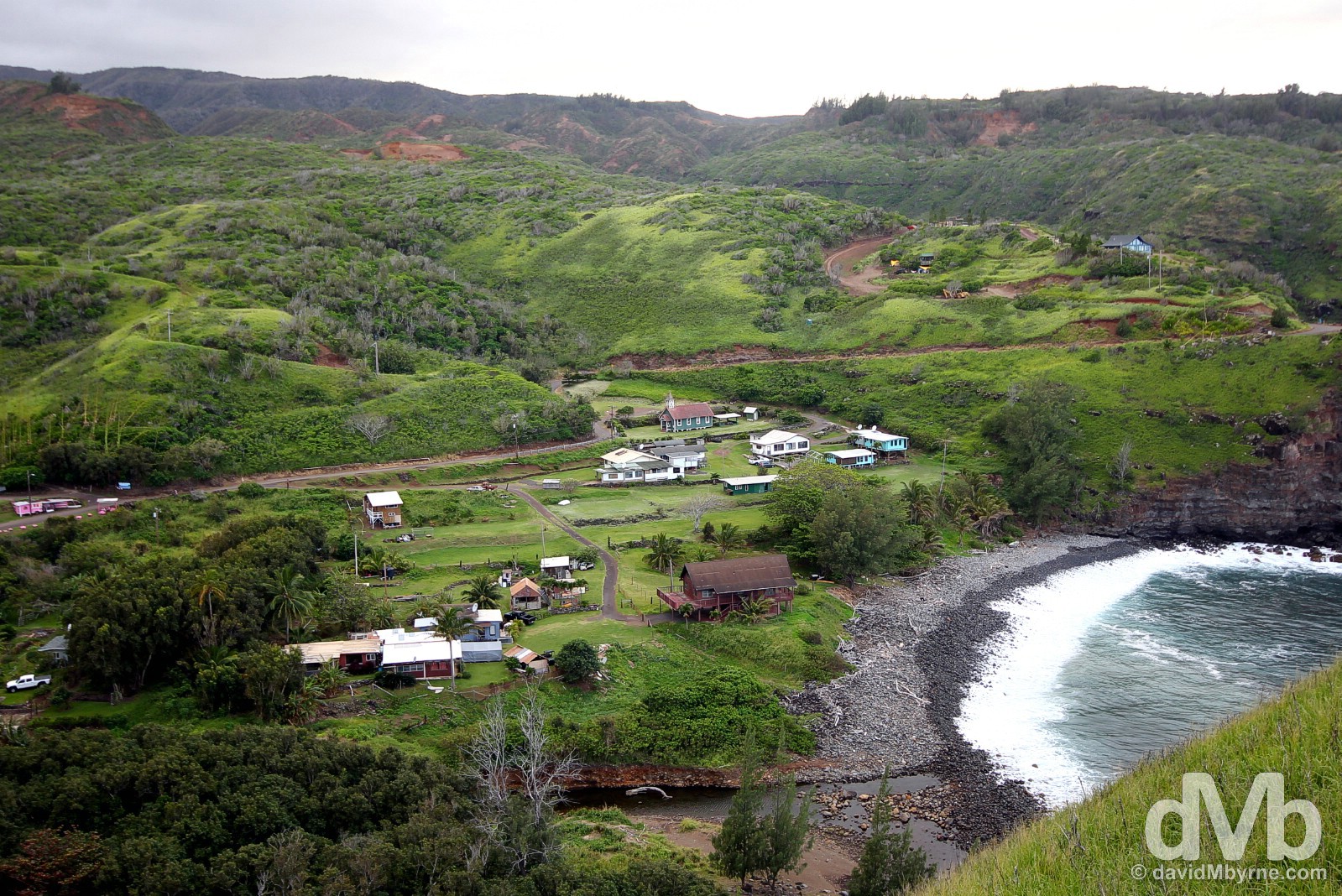 A cliff-hugging drive of some 34 kilometres via a hair-raisingly narrow, one-lane, steep and twisty road, some parts of which are barely fit for purpose, means the going is slow, or at least it should be. This is a road that demands your attention, a road Dangerourroads.org claims has ‘humbled many egos’, is not for ‘sissies’, and ‘shouldn’t be attempted by novice drivers.’ Take from that what you will.

This challenging road, which hugs the rugged northern tip of Maui, the second-largest of the Hawaiian Islands, needles around hairpin turns, careens over one-lane bridges and teeters beside treacherous cliffs. It’s one of Maui’s most adventurous drives, and undisputedly it’s most challenging. Perhaps it’s for the thrill of driving on the edge of a cliff, but more likely it’s for the incredible beauty of the views available on this drive.

It wasn’t until yesterday, day 8 in Hawaii overall, that some time was put aside for beach lounging with this beach, Big Beach in south Maui being the beach of choice. 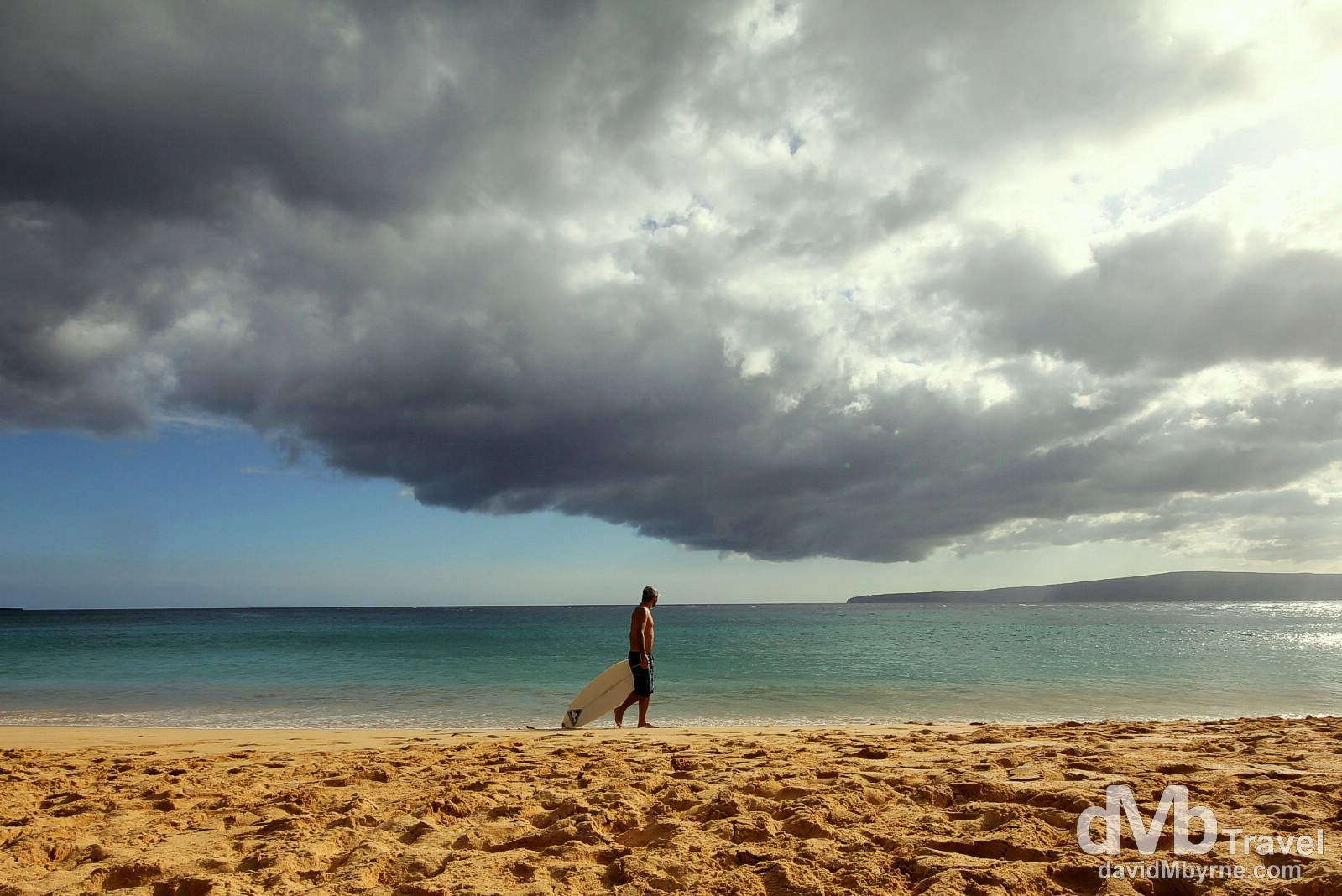 Big Beach, southern Maui, Hawaii, USA. March 5, 2013. || Big Beach, separated by a rocky headland from Little Beach, is one of Maui’s least crowded beaches and was once a playground for Hawaiian Royalty. While lounging here I was struck, as anyone would be, by the extensive cloud formations offshore, a climatic characteristic of the insular Hawaiian islands. On the horizon, some 11 kilometers (7 miles) way, is the uninhabited island of Kaho’olawe, the smallest of the eight main volcanic islands in the Hawaiian Archipelago and one used, until as recently as 1990, exclusively by the US military as a bombing target. Still littered with unexploded ordnance today, the island is strictly off-limits to tourists. 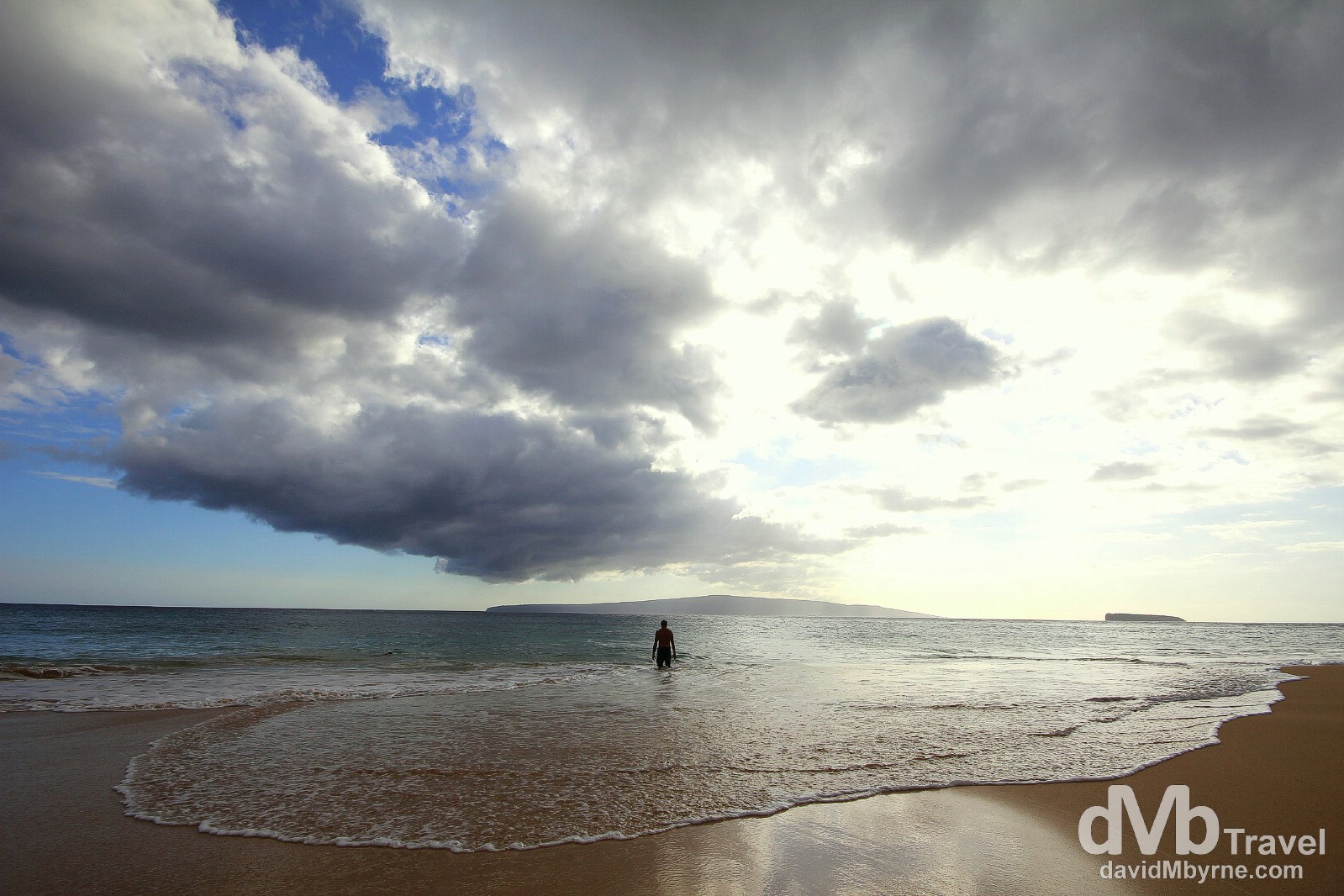 After circumventing the other Maui volcano, Mauna Kahalawai, a.k.a. West Maui Volcano, on day 1, by (very) early today, day 3, it was time to drive to the summit of the island’s dominant feature and the centrepiece of the island’s Haleakala National Park, the mighty Haleakala, a.k.a. the East Maui Volcano, a massive shield volcano that accounts for the bulk of Maui’s landmass (75%) – the island of Maui is a so-called volcanic doublet, formed from two shield volcanoes that overlapped one another to form an isthmus between them. 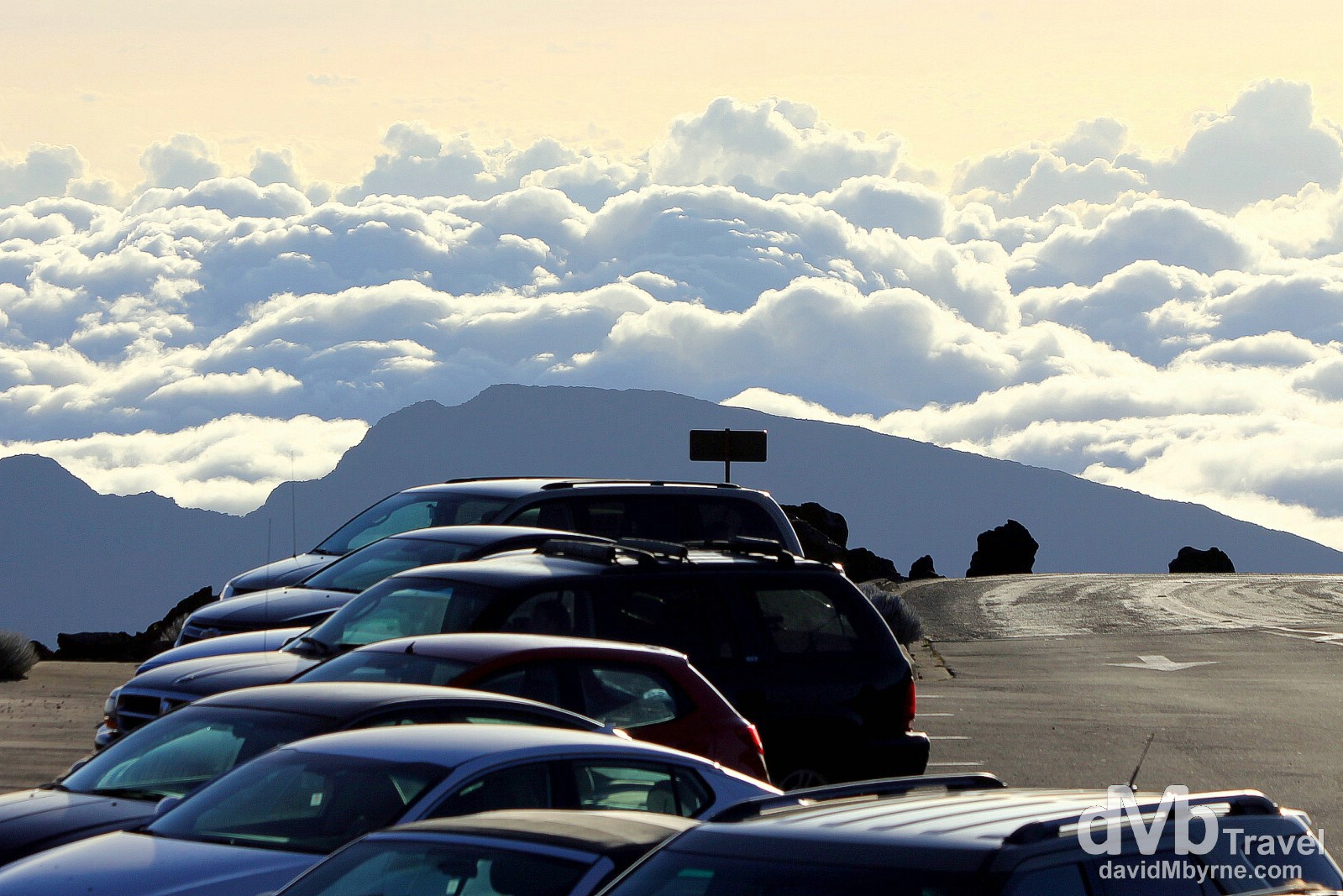 Cars above the cloud line near the summit of Haleakala in Haleakala National Park, Maui, Hawaii, USA. March 6, 2013. || The Pu’u ‘Ula’ula Summit (Red Hill) of Haleakala sits at an altitude of 3,055 metres (10,023ft), an area of barren desert with its own climate. Driving up here for sunrise is one of the must-do activities for any visitor to Maui. The drive itself along the well-maintained two-lane Haleakala Highway, a.k.a. Crater Road & Route 378, was to be the latest Maui road challenge – the road holds the world record for the highest elevation gain in the shortage distance driven – over 3,000 metres (10,000ft) in 61 kilometres (38 miles). Needless to say it’s up, up, up the whole way, & windy too with blind turns & switchbacks aplenty.

The road’s winding design, providing stunning panoramic views, is very curvy and fun for a leisurely ride, so it pays to take it slow. It begins in the upcountry farming and flower-growing district of Kula at an elevation of 3,200 feet. It reaches the summit in 22 miles after 32 switchbacks, climbing an average grade of 6%.

The above picture of cars parked near the summit of Haleakala, meaning House of the Sun, was taken at 7:30 a.m., an hour after sunrise proper which itself didn’t impress much on this particular day. But I have it on good authority that a Haleakala sunrise is indeed a sight to behold.

– Mark Twain commenting on sunrise from the summit of Haleakala 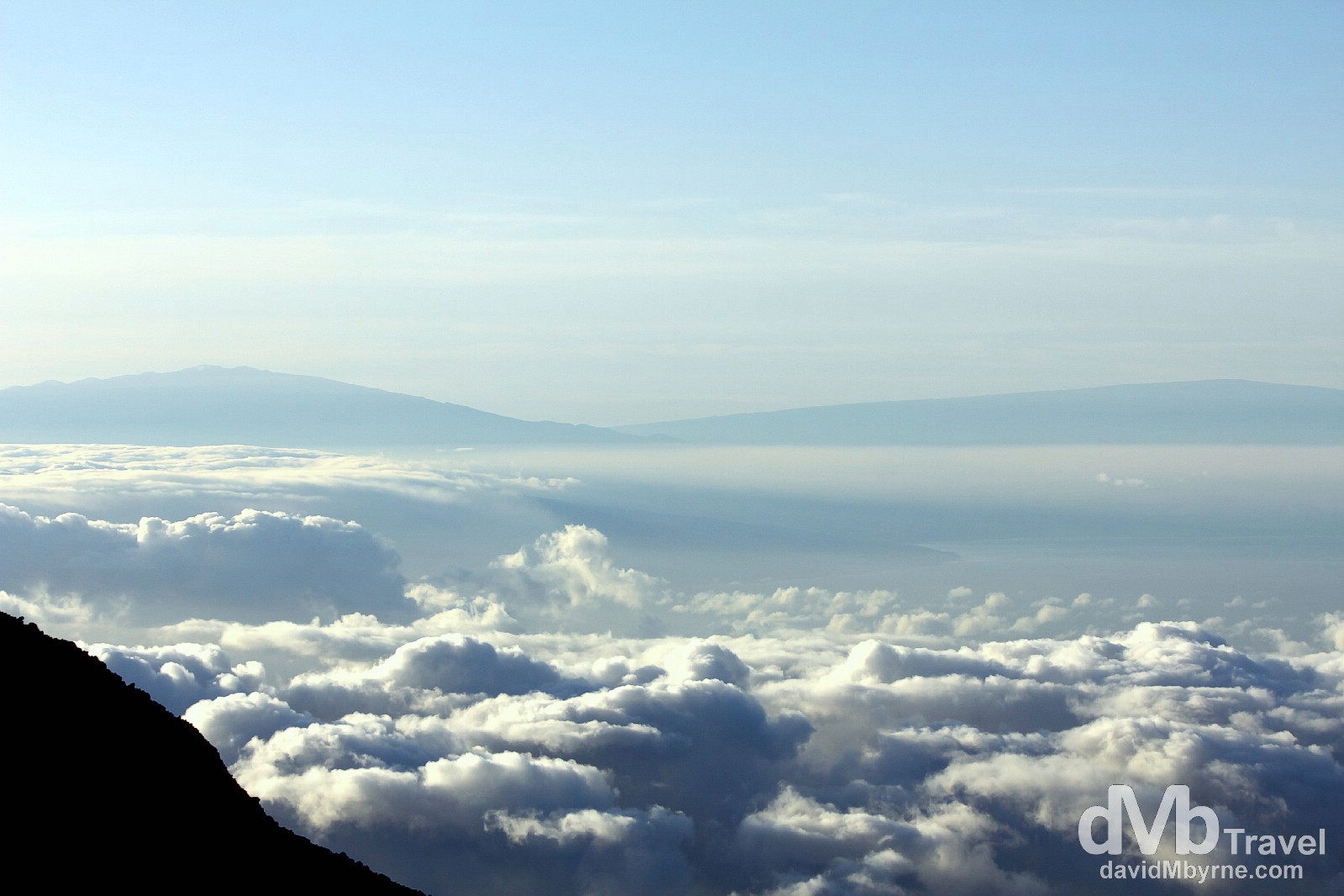 For me the sunrise from Haleakala was secondary to the amazing views, not only of the clouds hovering above northern Maui (& far below me) but also of the distant peaks on the Big Island of Hawaii far to the south across the Maui Channel – Mauna Kea (on the left, 128 kilometres (80 miles) away) & Mauna Loa (on the right, 160 kilometres (100 miles) away). It was especially gratifying being able to see the astronomical observatories atop the snowy 4,205 metre summit of Mauna Kea, the highest point in the Pacific and from where I witnessed sunset a few days earlier. Haleakala National Park, Maui, Hawaii. March 6, 2013.

You are now in kua mauna, the land above the clouds, where people never dwelled for too long. Ka po’e kahiko, the people of old, only came to this sacred place for specific reasons requiring training and understanding. At the foot of the mountain lies kahakai, the coastal lands, inhabited and cultivated for centuries. Haleakala National Park preserves and helps perpetuate the cultural richness of both kua mauna, kahakai, and the diverse features in between. It is all here for you to explore.

The Road To Hana
I’ve one more day here on the Valley Isle before I take my final interisland flight back to Oahu & I’ll be spending it as a guest of Valley Isle Excursions on their Road To Hana tour, another must-do here in Maui. Being chauffeured along Hawaii’s most famous road will be a nice way to bid adieu to the island.

Looking forward to being guests of @hanamauitour on their awesome Road to Hana tour. http://t.co/yuaUs4PRTi #hawaii #maui #RoadtoHana 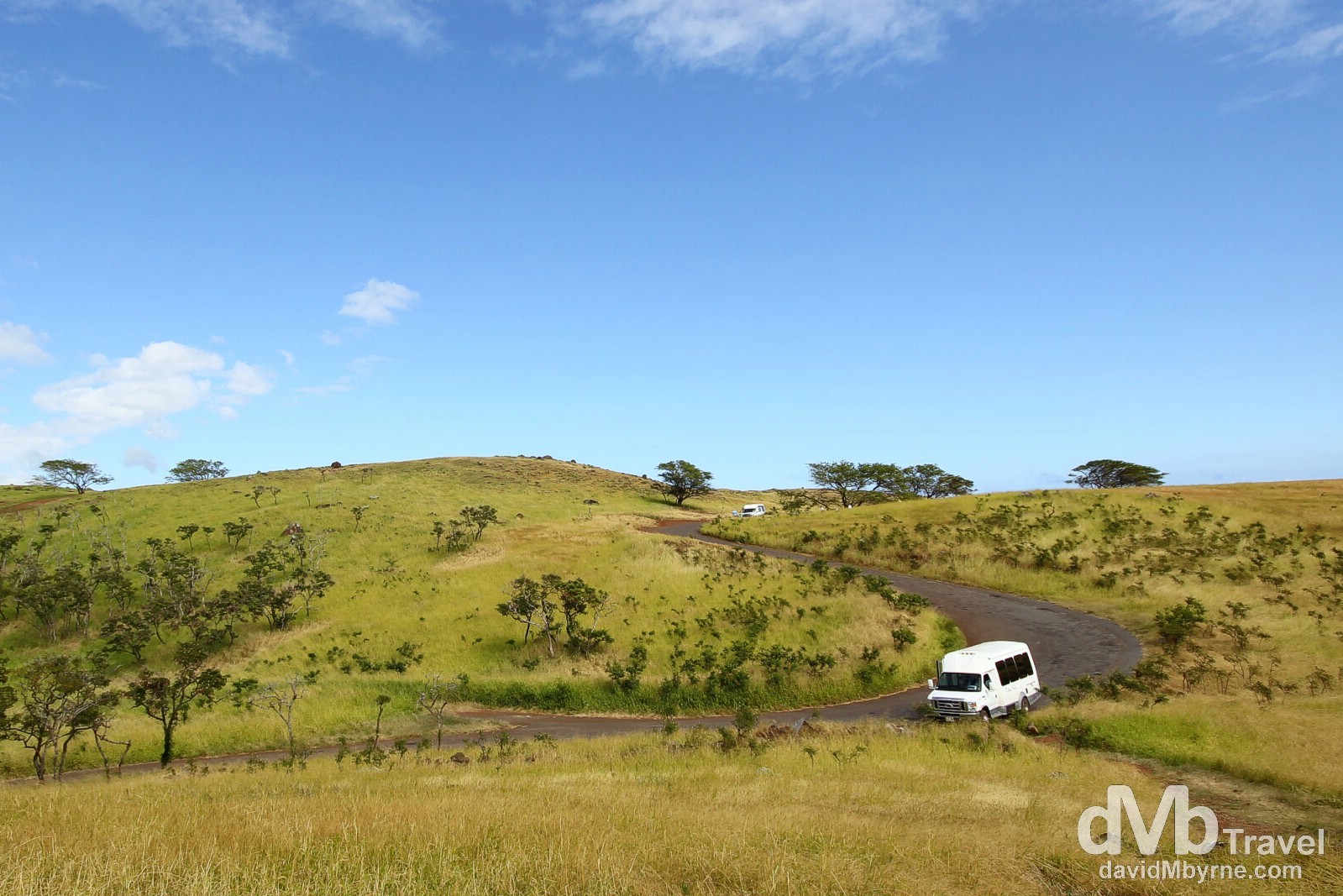 One of the most scenic drives in the world.