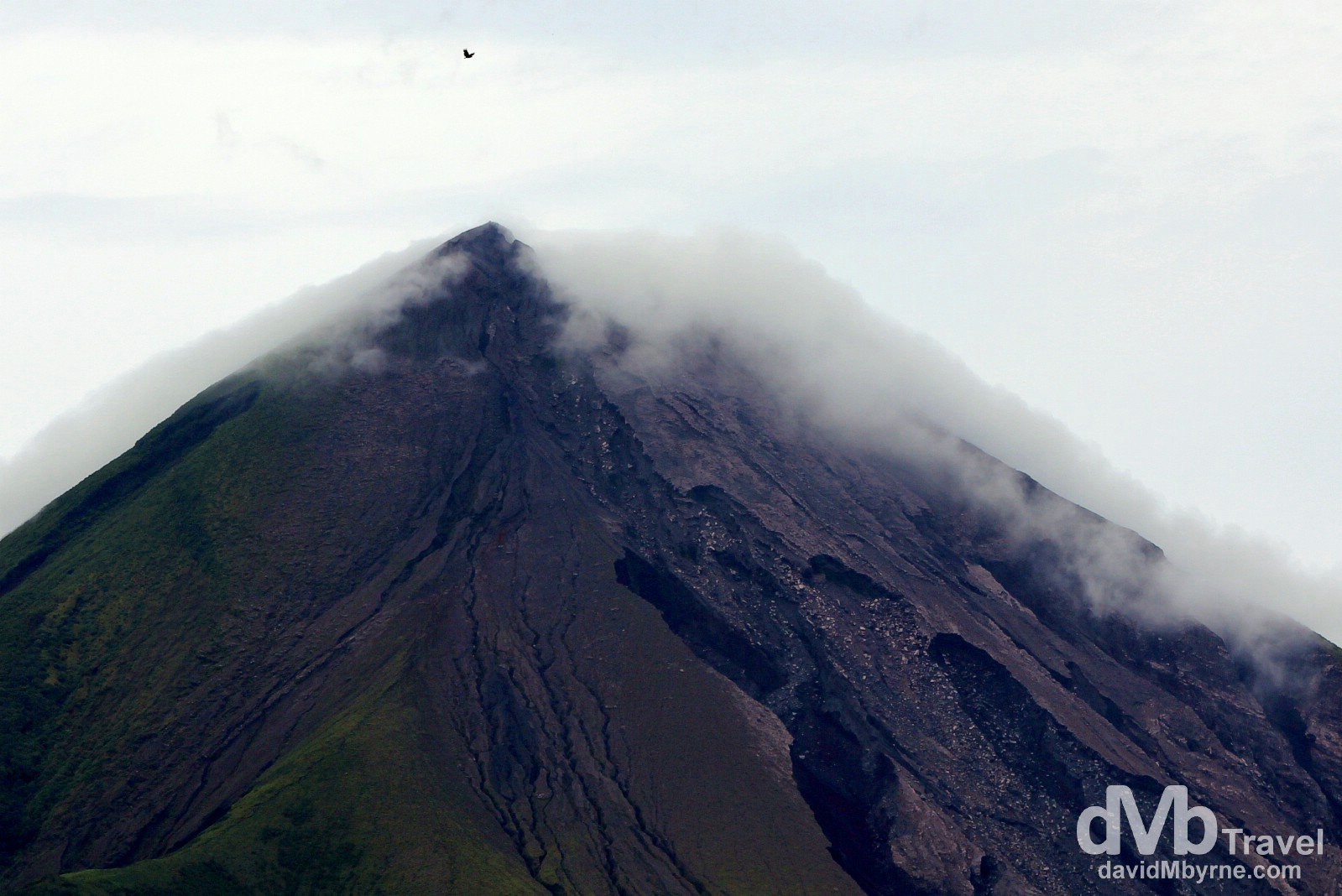 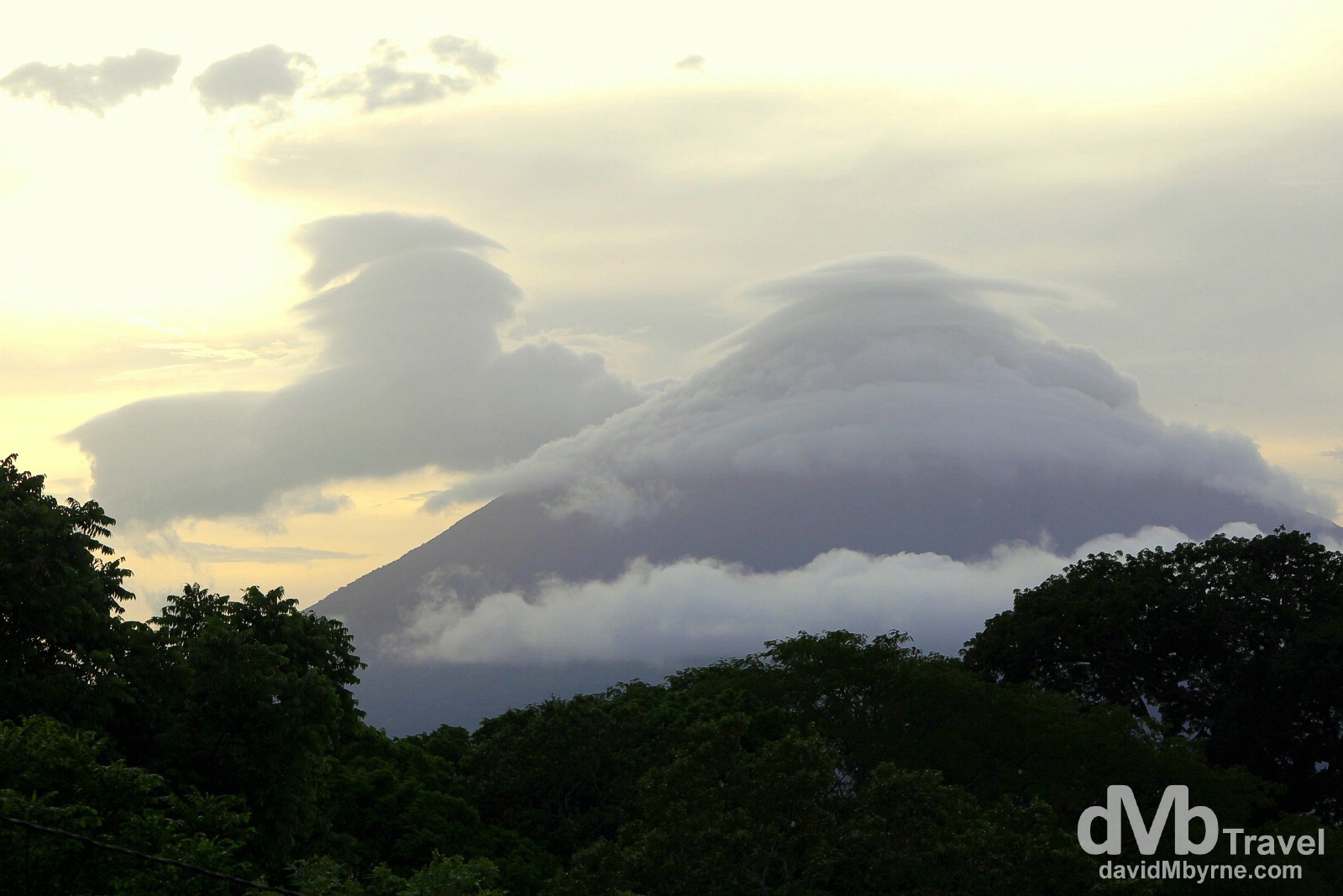 Clouds smother the summit of the perfectly conical, steep-sided, 1,610 metre Volcan Concepcion nearing sunset on Isla de la Ometepe. The small hourglass-shaped island, Nicaragua’s ecological jewel, was formed by twin volcanoes rising out of Central America’s largest lake. Volcan Concepcion is the larger of the two & one of the most active volcanoes in Central America. This picture was taken close to sunset (5:20 p.m.) from the veranda of my room on the slopes of the other, smaller Isla de la Ometepe volcano, the 1,392-metre high Maderas volcano, having just arrived from Granada (via Rivas) on the mainland. Isla de la Ometepe ( 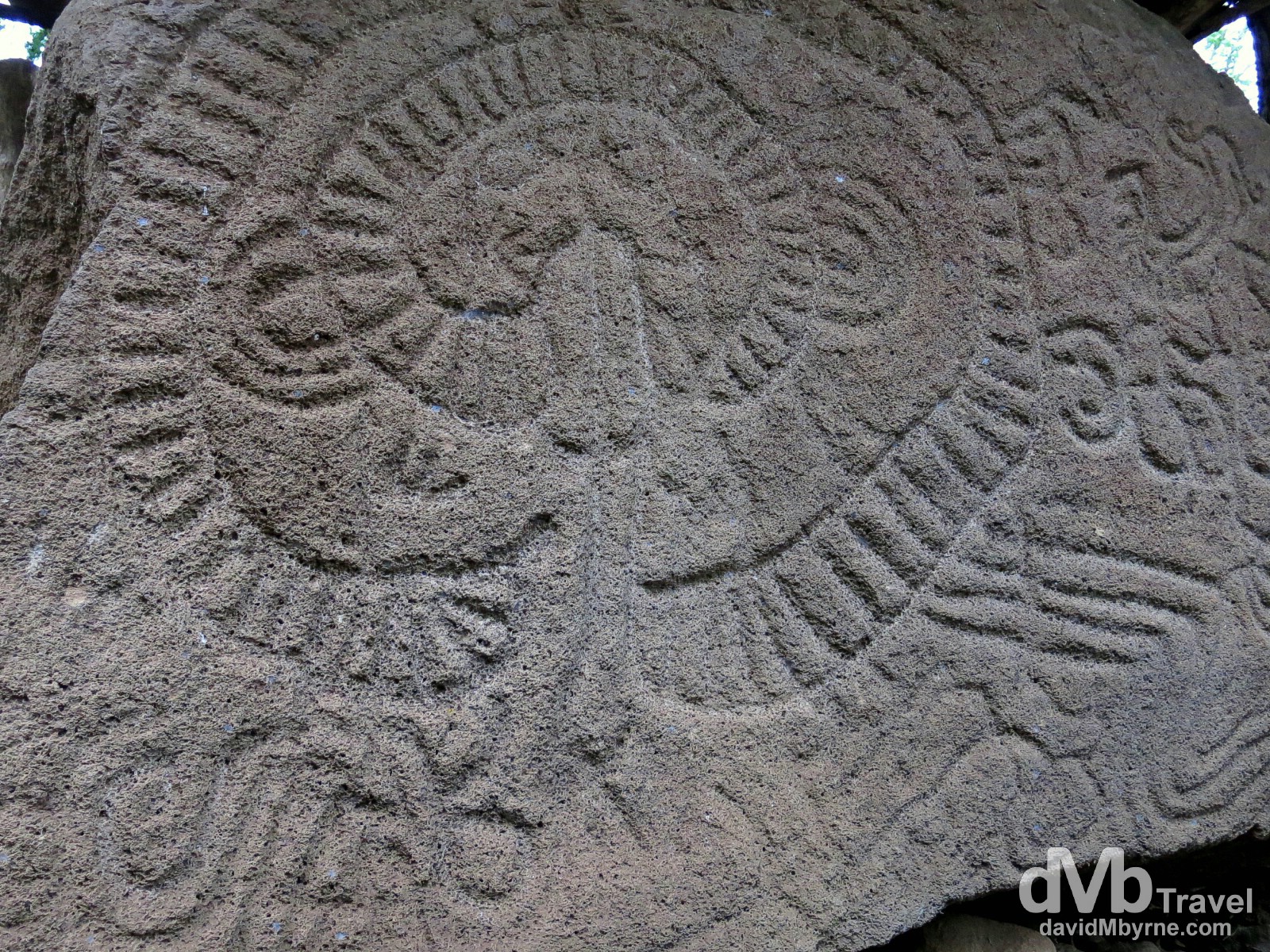 A petroglyph, a carving or line drawing on rock, especially one made by prehistoric people, on Isla de la Ometepe. While Nicaragua doesn’t have anything nearing the stone ruins of countries further north, it does have an impressive collection of petroglyphs, liner carvings in relatively soft volcanic rock that were thought to have been carved between 800 and 1200 years ago. Because of its isolation from the mainland, Isla de la Ometepe has the most impressive collection of petroglyphs in the country – they can be found just lying here, there & everywhere. This petroglyph was in the garden of Albergue Ecologico El Porvenir, the awesome remote hilltop lodge I called home for the two nights I spent on the island. Isla de la Ometepe, Lago de Nicaragua (Lake Nicaragua), Nicaragua, Central America. June 20th 2013 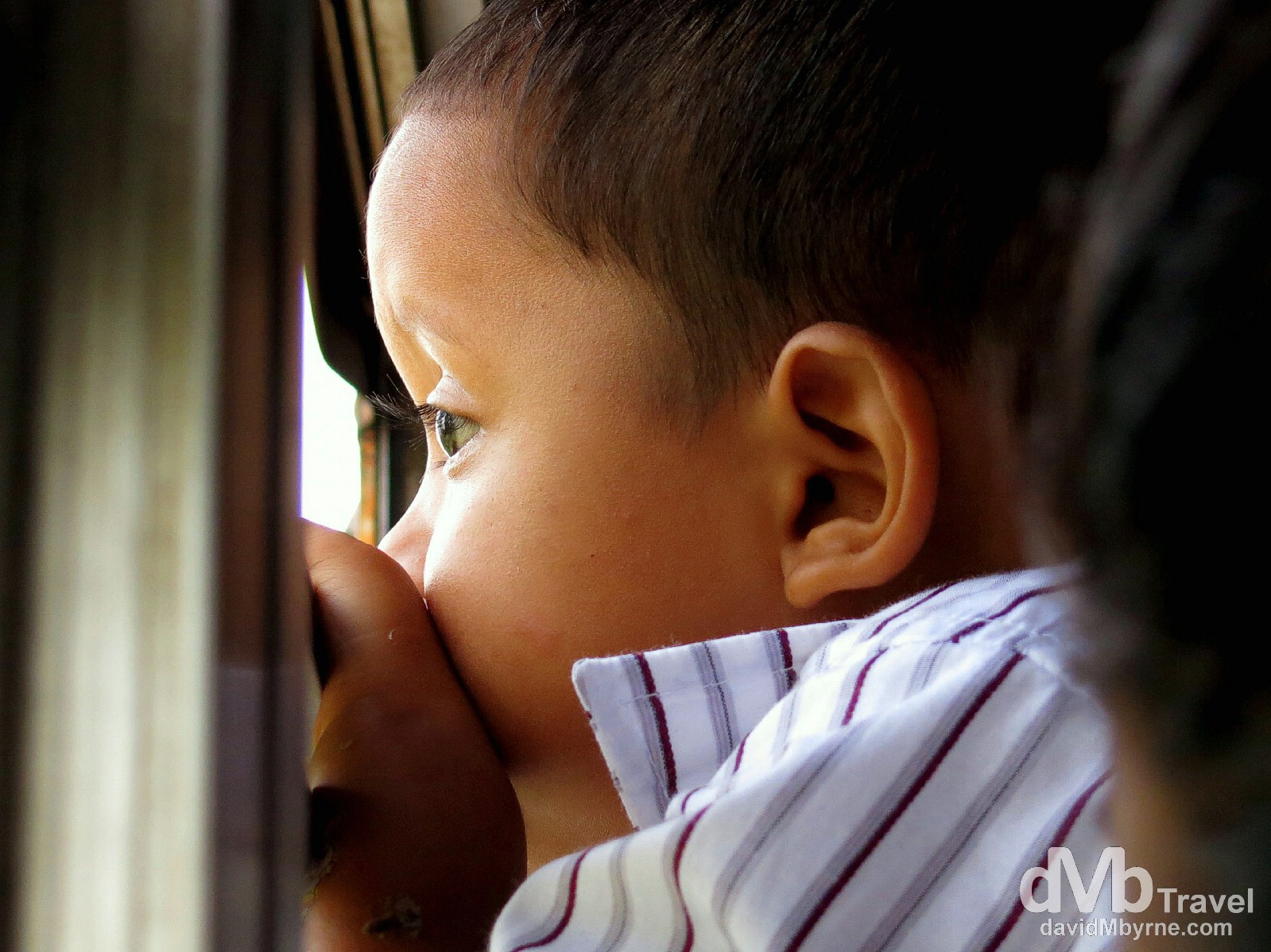 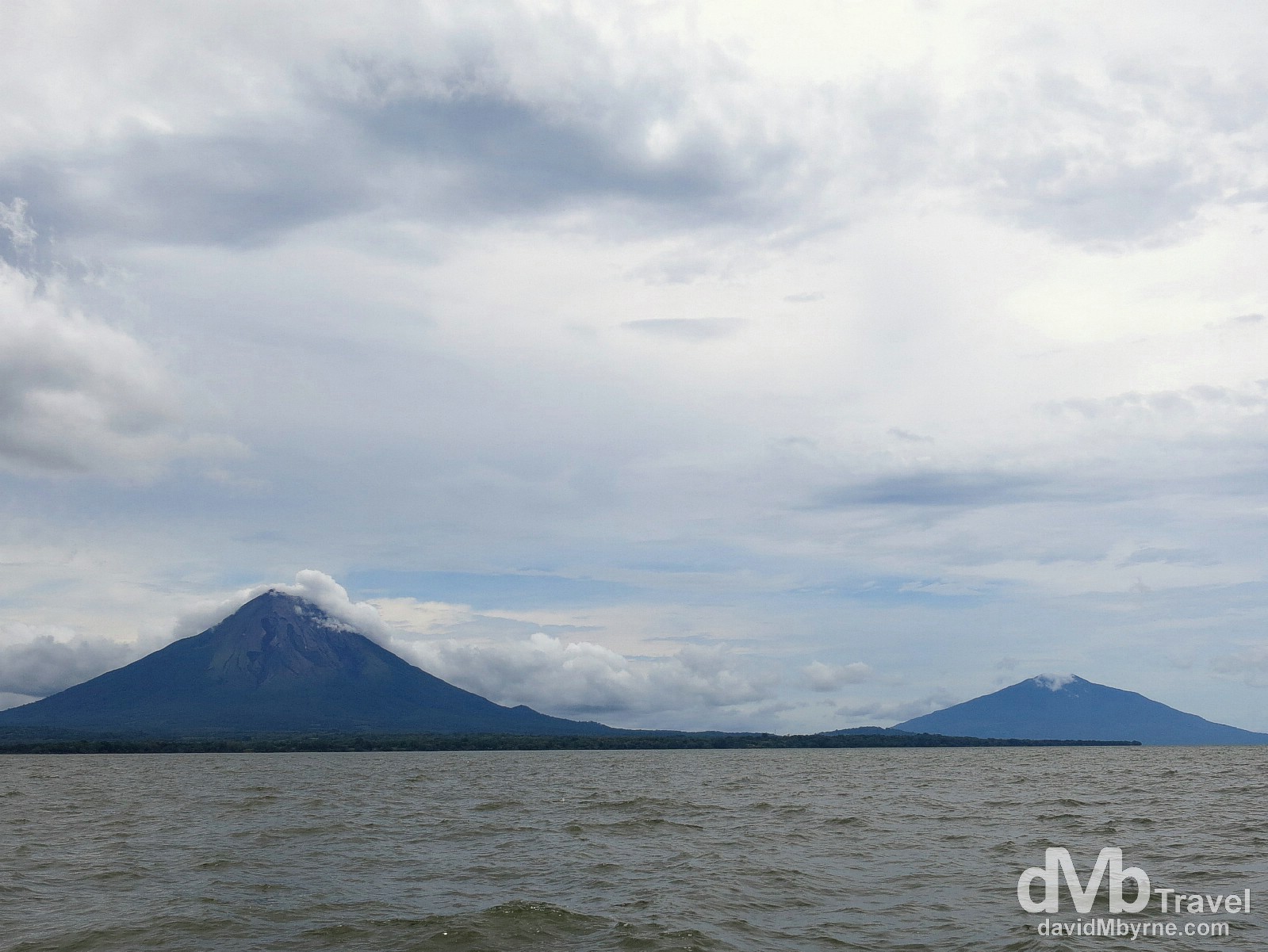 One final shot of Isla de la Ometepe showing the twin volcanoes of Concepcion (1,610 metres, left) & Maderas (1,392 metres, right) on the slopes of which I stayed, as seen earlier today from the ferry crossing Lago de Nicaragua (Lake Nicaragua) en route to the mainland. Prior to arriving on the island a few days ago I had ambitions to scale one of these two volcanoes. Concepcion, whose summit is more often than not shrouded in afternoon cloud, is billed as a ‘serious’ 10-12 hour hike, while Maderas an easier 6-8 hours. In this heat either option just seemed like a bad/daft idea so I sat on the veranda of my $10 hilltop lodge room instead, taking in the views and catching up on stuff. I have no regrets. None. Lago de Nicaragua (Lake Nicaragua), Nicaragua, Central America. June 21st 2013.