It was deja vu all over again. Just like seven years ago, I eventually made it out of China and after two nights of riding the rails in a well-worn Mongolian train carriage I arrived earlier today, October 31 2012, in the Mongolian capital of Ulan Bator. It’s good to be back. 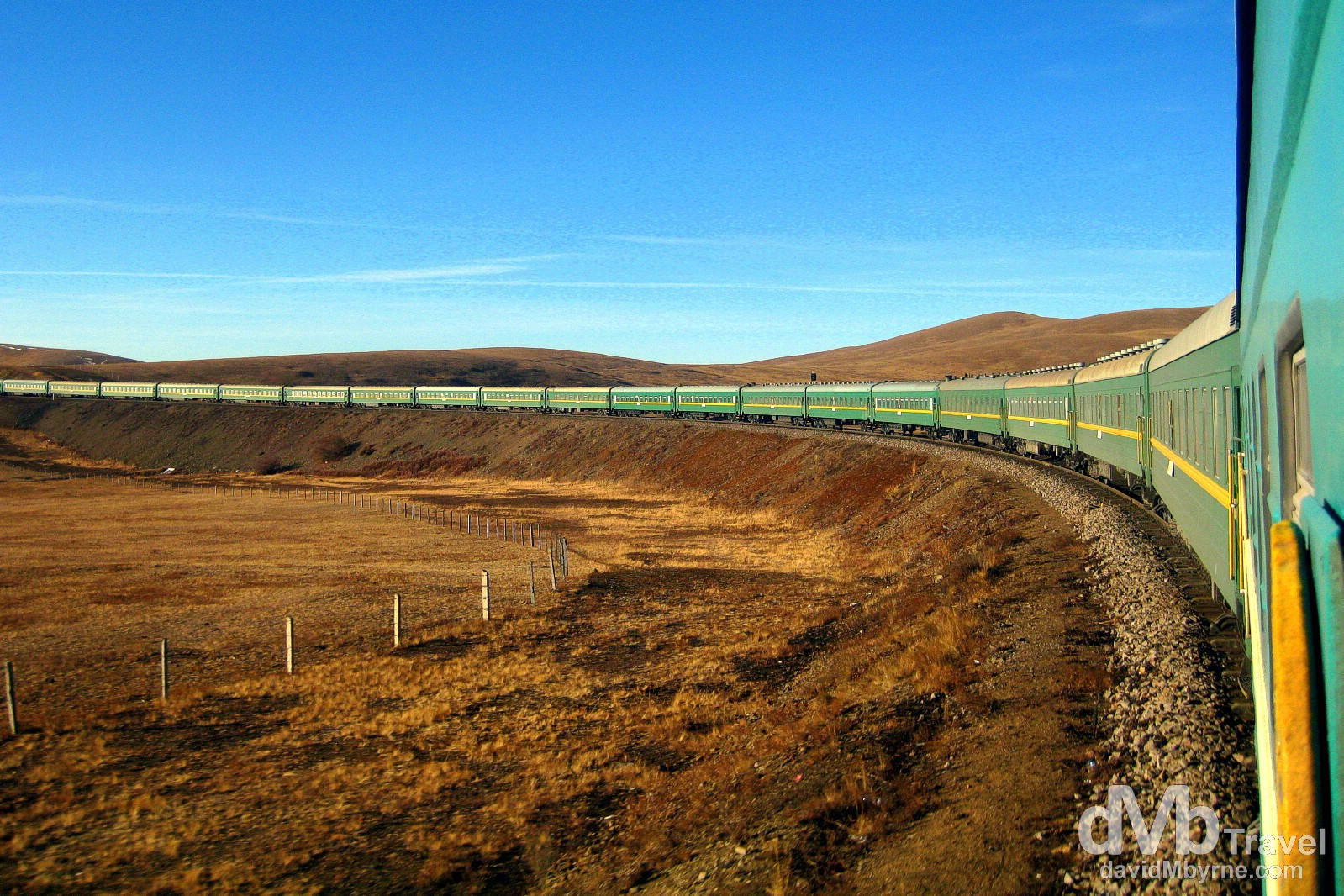 The Ulan Bator-bound train winding its way through the Mongolian grasslands a few hours shy of the Mongolian capital. October 31st 2012.

The trip was long & pretty uneventful – how eventful can a 38-hour, 2-night train trip through mostly desolate steeps be? Not very is the answer, but it’s still strangely enjoyable experience. I knew what to expect – boredom mostly – as I did the exact same trip back in 2006. I lay around a lot, waited, wondered numerous times why we’d stopped for no apparent reason in the middle of nowhere (although everywhere around here is the middle of nowhere), drank tea, waited a bit more, watched bogies being changed, filled in arrival/departure cards & dealt with 2 different sets of border guards & customs officials (first the Chinese & then the Mongolians), read, watched a few shows on my laptop, slept, drank more tea, lay around a bit more, drank beer & kept waiting, all the while hoping I’d keep my 4-berth compartment all to myself (I did). 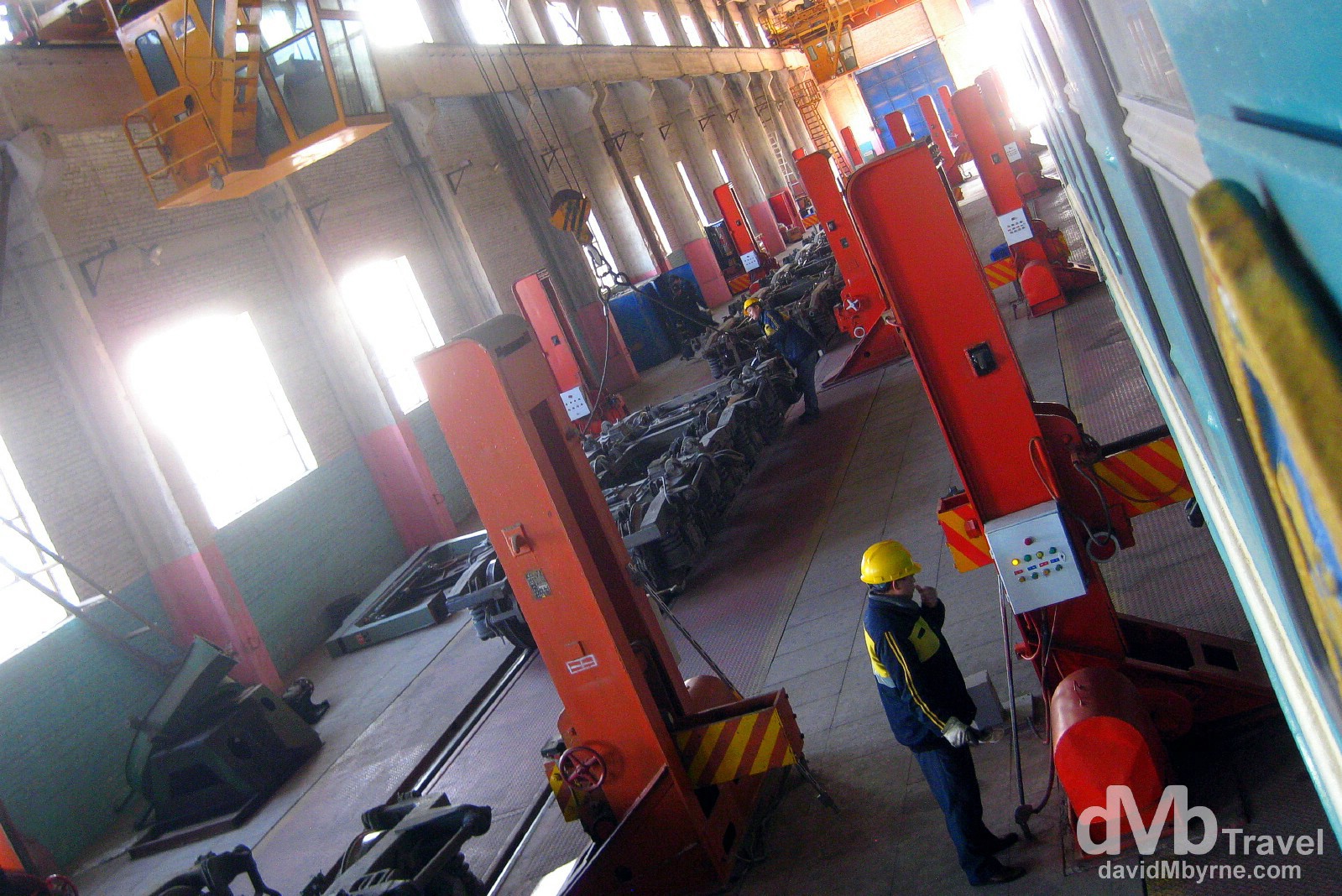 Bogies, the train undercarriage, being changed in a shed on the Chinese side of the China-Mongolian boarder. This is a necessary procedure on the Trans-Mongolian Railway journey due to the fact that the Mongolians & Russians use a different railway gauge to the Chinese. The procedure to change the bogies requires a two hour pit stop but it does offer a rather unusual photo opportunity, albeit from the confines of the train carriage – passengers are not allowed to disembark the train during the procedure due to the area being a national border area. On the Chinese side of the China/Mongolian border. October 30th 2012 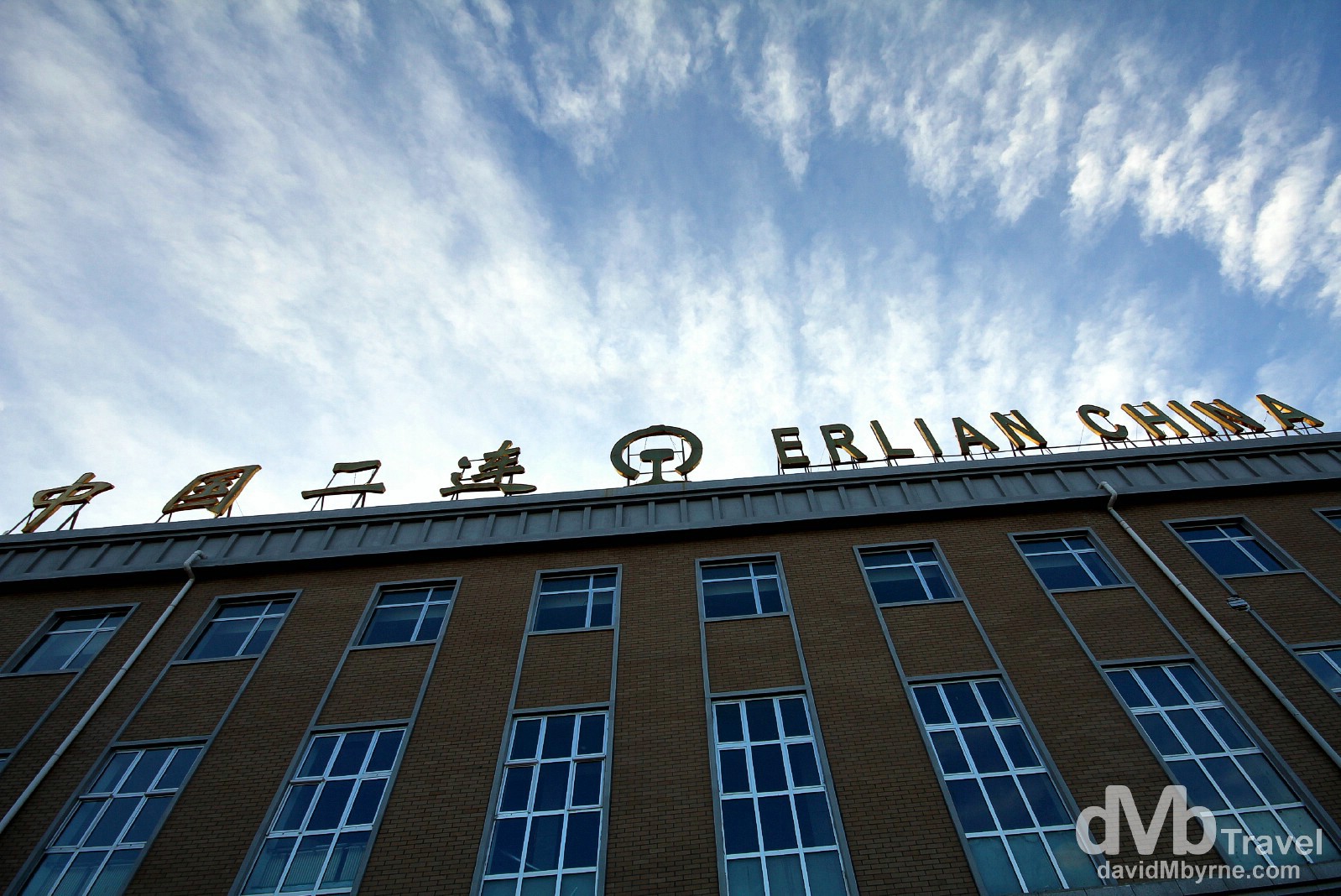 After changing the bogies the train rolled into Erlian station, my last stop in China where I was (eventually) allowed off the train. Six hours the train sat here before eventually deciding to roll a few kilometres north over the border into Mongolia, where it sat for another few hours. Cross-border train travel in this part of the world is slow going. Best to not be in a hurry. Erlian Train Station, China. October 30th 2012

Yes, for 38 hours compartment 4 of carriage 2 on train 4252 from Hohhot, Inner Mongolia, China, to Ulan Bator, Mongolia, was all mine. A Chinese pairing did try to join me as the train sat for the best part of 6 hours in Erlian Station on the Chinese side of the border but they thought better of that idea once they saw I was a foreigner. Or maybe they moved on because they noticed my compartment had seen better days and had seen those better days quite a while ago too. It had a draft I couldn’t locate, well-worn carpet, a musty odour, lumpy pillows, a power socket that didn’t work & lights that worked only when they wanted to & dimmed on a whim. But it coupled with its woolen blankets was cosy.

Of course I tried to get a few pictures of the trip. It was hard. The stops were as photogenic as one would expect any dusty, soulless border town in this part of the world to be. Pictures from the train itself were next to impossible as all windows were sealed. Or just about.

Travelling through the Mongolian grasslands en route to the Mongolian capital of Ulan Bator. This picture was taken from my carriage window, 36 hours in and only some 2 hours shy of my destination of Ulan Bator. I could just about get my hand out the small opening in the window (but only after taking my watch off) so this was taken with my small point-and-shoot; getting an SLR out the opening wasn’t an option. I captured an almost identical picture to this some 7 years ago on my first Trans-Siberian/Trans-Mongolian adventure, although back then it was February and there was snow on the ground; I’m straddling seasons here by arriving at the end of October – almost the end of the high/tourist season & the start of the low/you’d-be-mad-to-come-here-in-winter season – so it’s not as cold as I thought it would be, not cold enough yet for snow. While this isn’t the Gobi Desert – it dominates the southern third of the country whereas this is near Ulan Bator further north – it is some of the grassland that makes up 52% of the country. Used mainly for grazing, this land of emptiness with no fences – except when skirting the rail line – or privately owned land is a boy scout’s dream. The Mongolian grasslands from the train approaching Ulan Bator. October 31st 2012