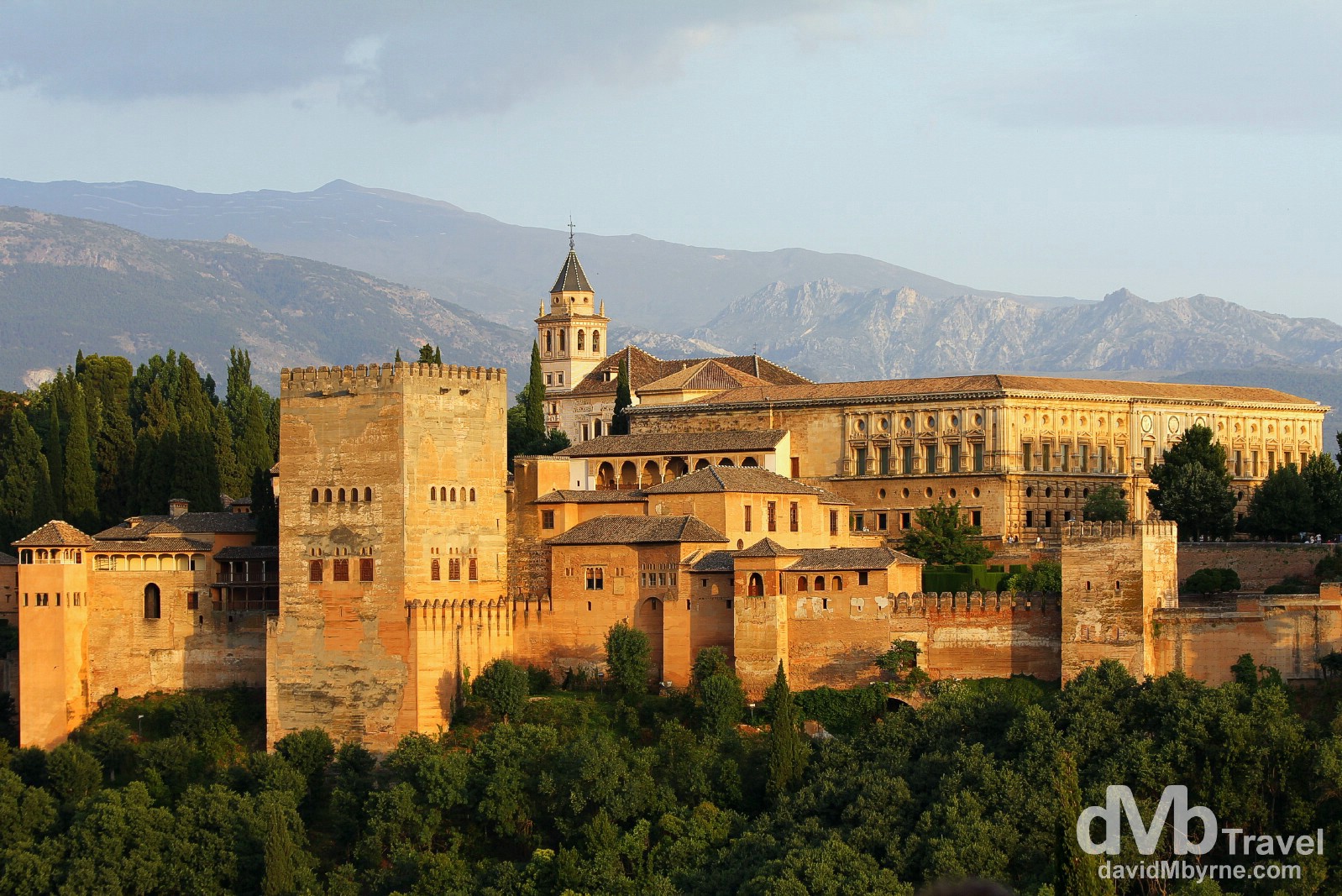 I spoke too soon. It was overcast and wet my first day here in Granada – I arrived having left the sun (sea & sand) of Malaga & the Costa del Sol behind. But that was a few days ago now & the anomaly of clouds & rain has passed. It’s beautiful here today, day 3 in the capital of the province of the same name, a city with a population of some 260,000. There’s a very different feel to life here; the city is a more worklike, bohemian looking & feeling place compared to the glitzy, polished coast. 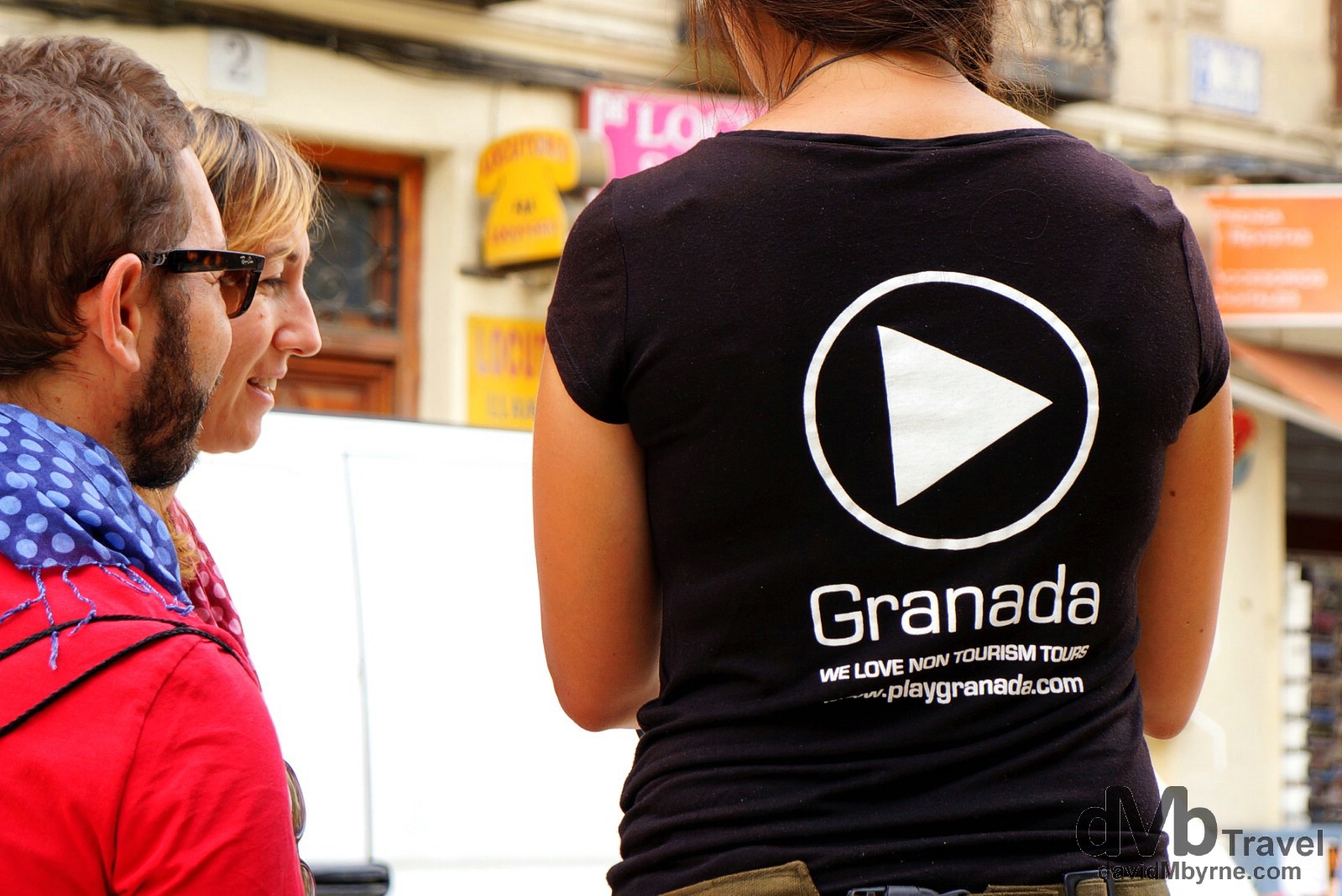 The weather may not have impressed me on my first evening in Granada but this did. Pretty, bilingual girls zipping around the central Plaza Nueva on segways assisting tourists with questions. Genius. Plaza Nueva, Granada (

I didn’t expect Granada to be as photogenic as it is. I knew it would be (I’ve seen pictures) but it still surprised me. I’ve taken a dMb standard number of captures since arriving in the city a few nights ago (no más, no menos) and there is more than a few pictures from Granada presented in this posting. However, I have no pictures from the innards of one of Spain’s top tourist attractions, the stunning Alhambra. Nope, not even one.

Part fortress, part palace and part garden, the Alhambra is situated on a plateau overlooking the city of Granada and regularly tops the list of must-see tourist sights in Spain. And it’s easy to see why.

Possibly Spain’s most famous structure, vying for the title with Barcelona‘s Sagrada Família, Granada’s iconic Alhambra was initially built as a Muslim fortress in the 9th century. It was built to its present form in the 14th century during the golden age of Andalusia when the city of Granada was the capital of an independent emirate, the last bastion of Islam on the Iberian Peninsula (present-day Spain & Portugal). The Muslims ruled from the increasingly lavish Alhambra Palace for over 250 years, a period of artistic & scientific splendor which saw Granada become one of the richest cities in medieval Europe. Much changed in the 15th century with the defeat of the Muslims by the Christian armies of the Catholic Monarchs Isabel & Fernando, bringing to an end almost 800 years of Muslim rule, the Muslims having first arrived in 711 by invading the Iberian Peninsula from northern Africa. The Christians used the Alhambra Palace for several years after their victory, changing mosques into churches and demolishing areas of the palace altogether to make way for Christian-inspired buildings & monuments. Today the Alhambra attracts over 6000 visitors a day, a set & strictly time allocated number. It has been a UNESCO World Herritage listed site since 1984, as have the neighbouring Generalife Gardens & Granada’s old Islamic district of Albayzin across the Darro valley from the Alhambra & from where this picture was taken. The Alhambra as seen from Mirador (Gazebo) San Nicolas in the Albayzin district of Granada, Andalusia, Spain. June 11th, 2014

Rising above the modern lower town, the Alhambra and the Albayzín, situated on two adjacent hills, form the medieval part of Granada. To the east of the Alhambra fortress and residence are the magnificent gardens of the Generalife, the former rural residence of the emirs who ruled this part of Spain in the 13th and 14th centuries. The residential district of the Albayzín is a rich repository of Moorish vernacular architecture, into which the traditional Andalusian architecture blends harmoniously.

– UNESCO commenting on the Alhambra, Generalife and Albayzín in Granada

Palacio Nazaries
The billed highlight of any visit to the Alhambra is its Palacio Nazaries, access to which is strictly controlled by a time stamped on admission tickets in a bid to help its preservation. It’s still a busy place, overrun with very annoying tour groups. I had an 8:30 a.m. ticket meaning I was one of the first admitted to the palace on this day thus giving me about an hour to look around before the flag-following hordes arrived. That was/is time enough to appreciate the lavishly decorated palace rooms, the marble pillared & reflecting pool courtyards, the numerous water fountains/features, & the proliferation of decorative zellij (patterned ceramic tile work), astonishingly carved woodwork, & intricately moulded stucco Arabic inscriptions.

The most brilliant Islamic building in Europe

The Alhambra’s Palacio Nazaries is no doubt impressive and may just be ‘the most brilliant Islamic building in Europe’ not that, in fairness, Europe can boast a string of ‘brilliant’ Islamic buildings. But – and here’s the but – as impressive as it is, the Palacio Nazaries is just like every other building in Morocco and having recently spent almost 6 weeks travelling that country the Islamic charms of the Alhambra were no novelty to me. I took pictures (including this one as uploaded to my Instagram account) but not too many. And once the crowds arrived I put the camera away altogether & I escaped to the Alhambra gardens, at least until such time as the crowds caught up with me there. 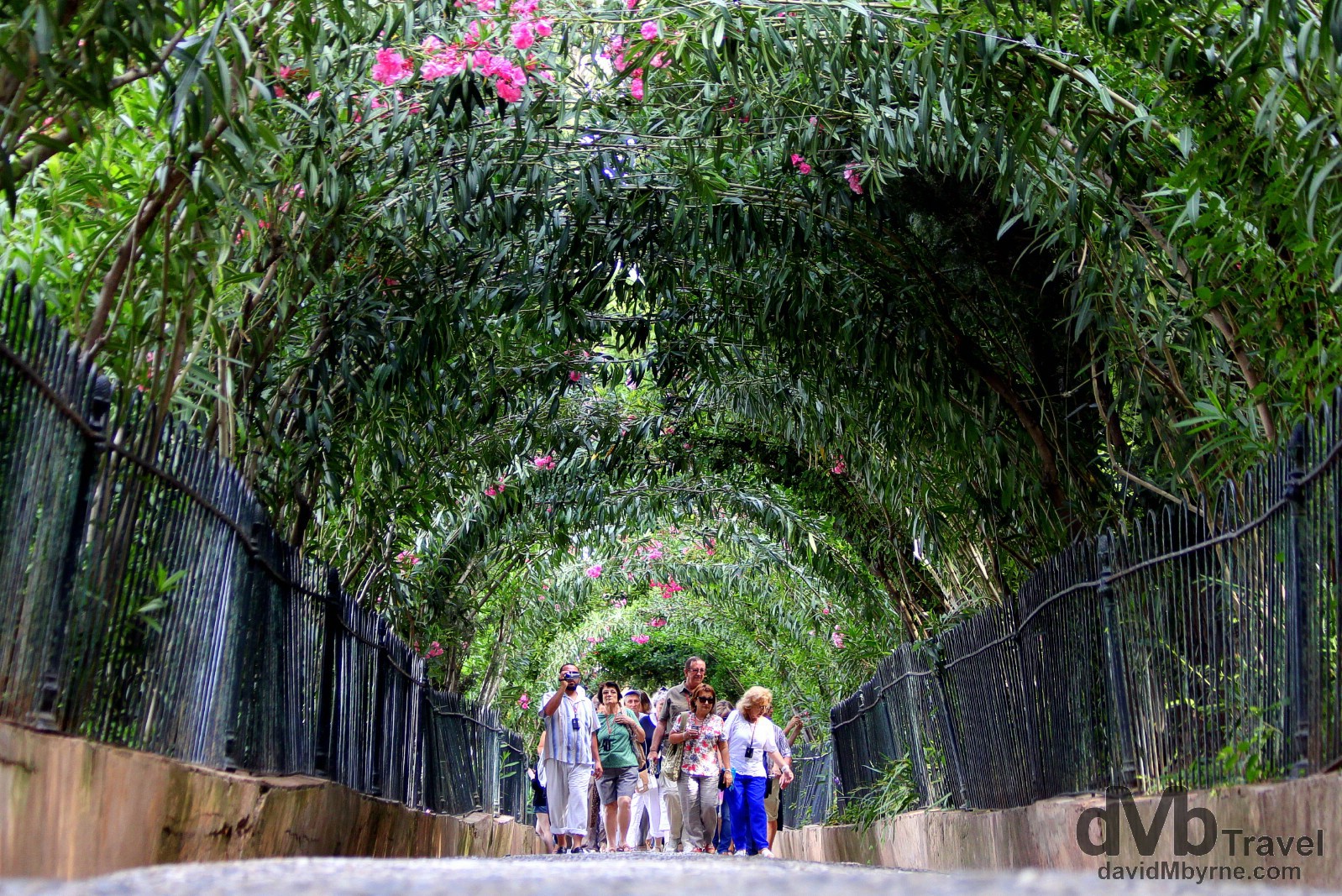 A tour group walks through a rosebush tunnel in a section of the Alhambra’s UNESCO-listed Generalife gardens, somewhere Alhambra rulers would come to smell the roses. The Generalife, meaning Architect’s Garden, is a (mostly) peaceful & soothing composition of pathways, patios, pools, fountains, trimmed hedges, tall trees and rosebush tunnels, all of which offer a nice respite to the crowds in the rooms of the Alhambra (until of course they follow you to the gardens where you can then use them as subjects in your pictures). Granada, Andalusia, Spain. June 11th, 2014

Unique artistic creations, the Alhambra and the Generalife of Granada bear exceptional testimony to Muslim Spain of the 16th century. They form an exceptional example of royal Arab residences of the medieval period: neither destroyed nor changed by the alterations of radical restorations, the Alhambra and the Generalife appear to have escaped the vicissitudes of time. 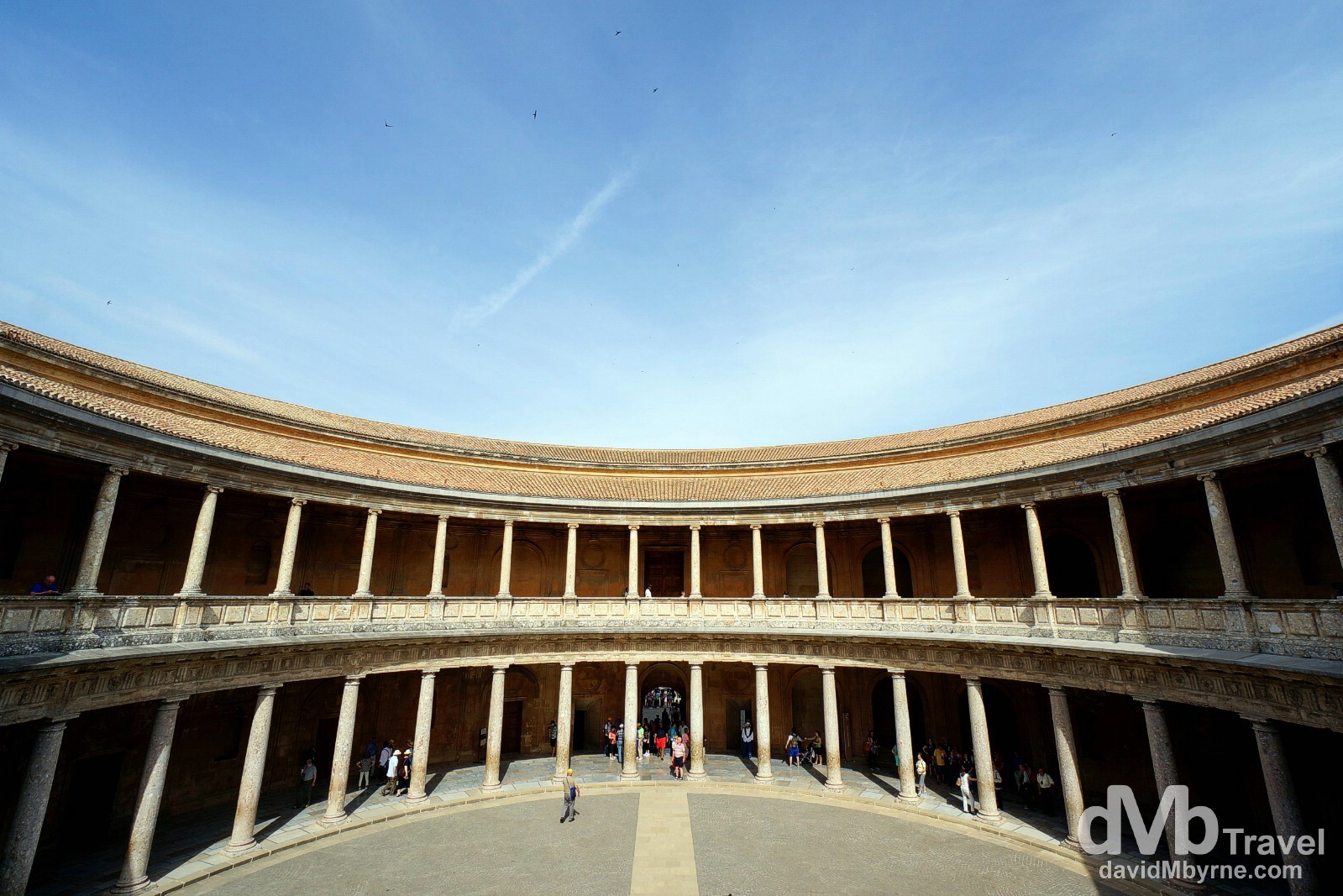 A section of the Muslim Alhambra was destroyed in 1527 to make way for this, the unfinished Palacio de Carlos V. The exterior of this imposing Renaissance structure is square in shape but its two-tiered, 32-column interior courtyard is very much circular. I loved it in here, playing with angles, symmetry & shadows. Awesome wide-angle territory. Palacio de Carlos V in the Alhambra in Granada, Andalusia, Spain. June 11th, 2014 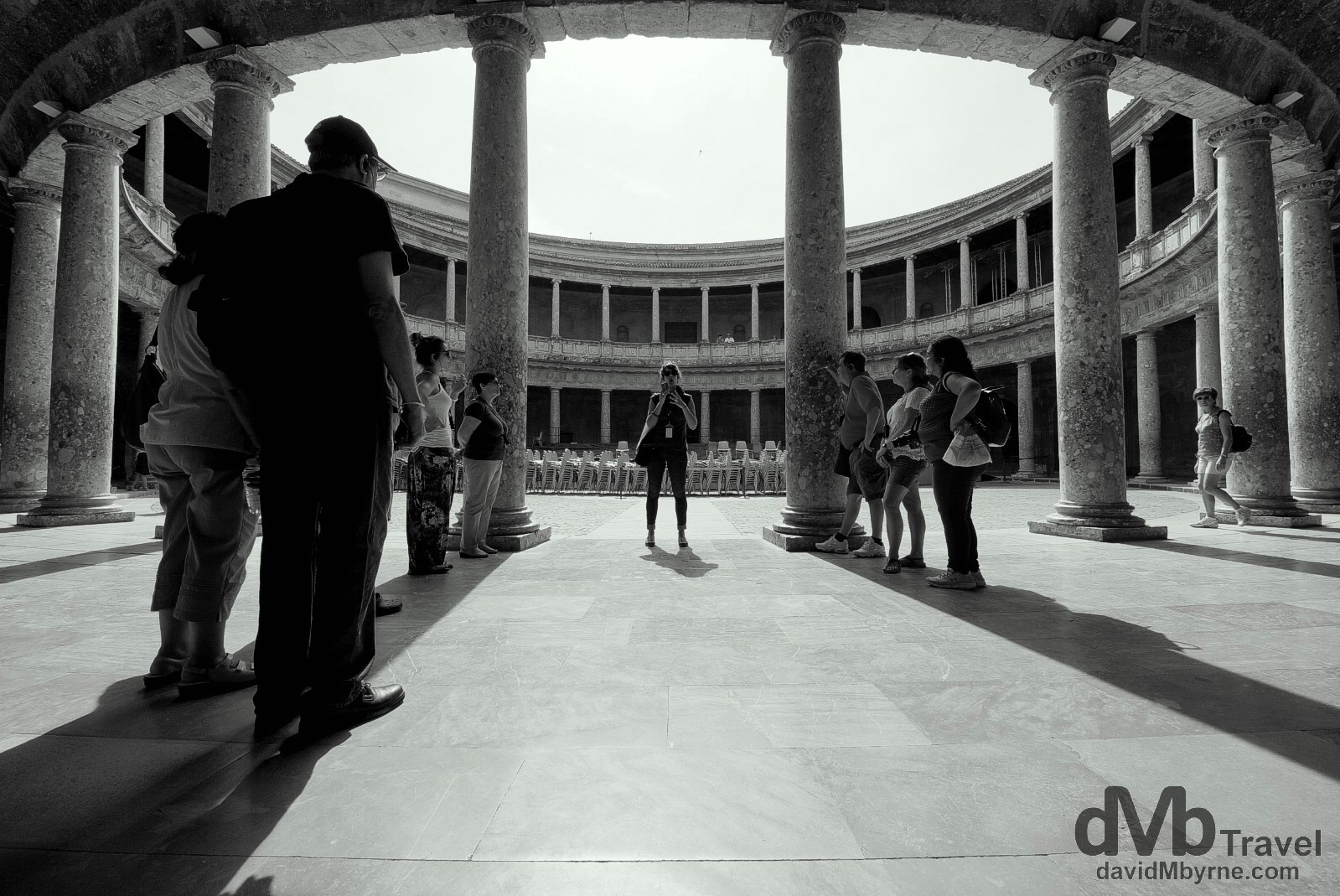 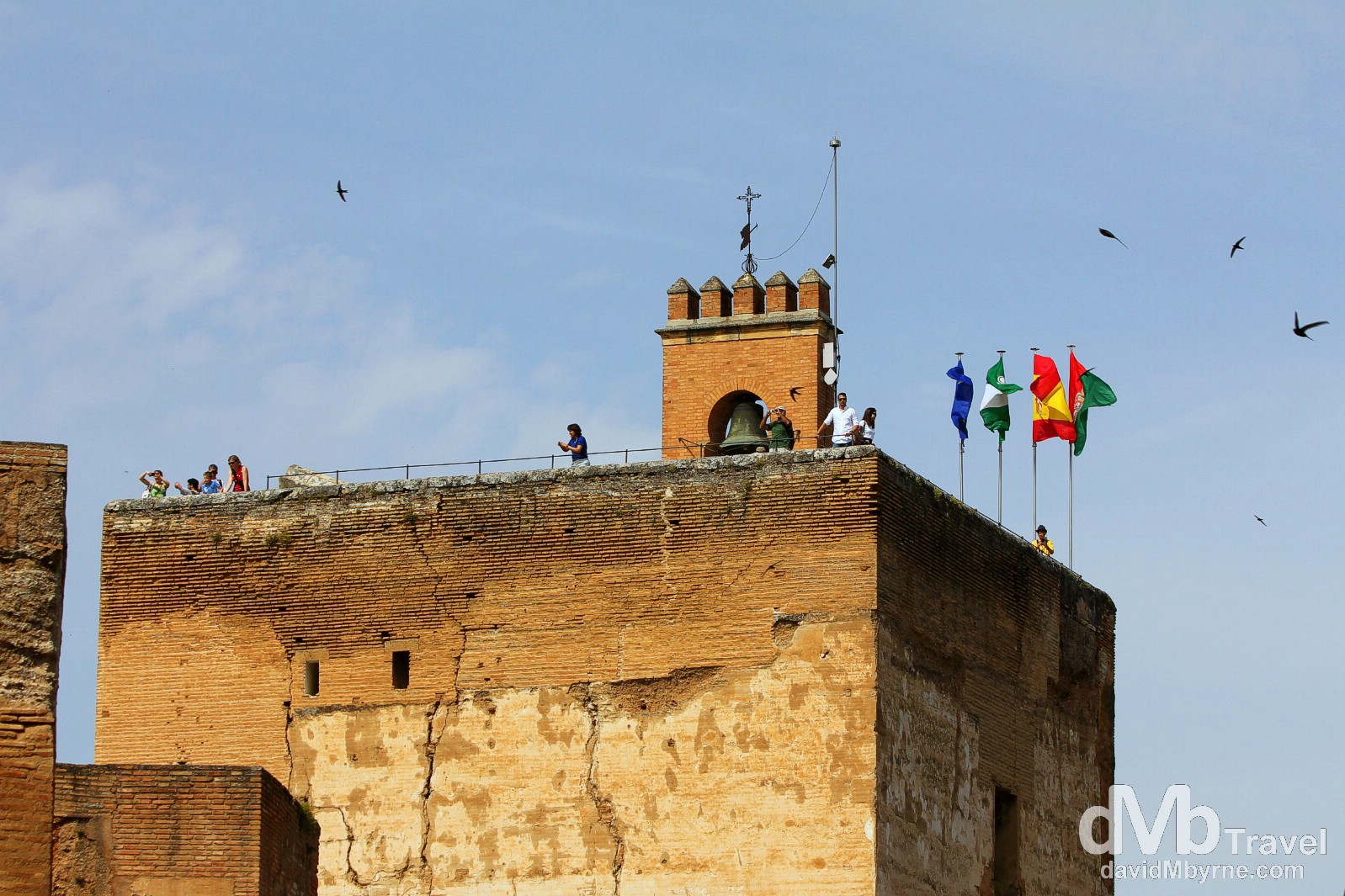 One final shot from my time in the Alhambra & surrounds, that of people atop the Torre de la Vela (Watchtower) in the Alhambra Alcazaba (Citadel). The ramparts & a few towers are all that survive of the old citadel with the Torre de la Vela offering the best views down over Granada & the distant Sierra Nevada. Some of the birds, mostly swallows, that seem to be perennially circling the skies above the Alhambra, an abiding memory of my visit, can be seen in this picture. Granada, Andalusia, Spain. June 11th, 2014 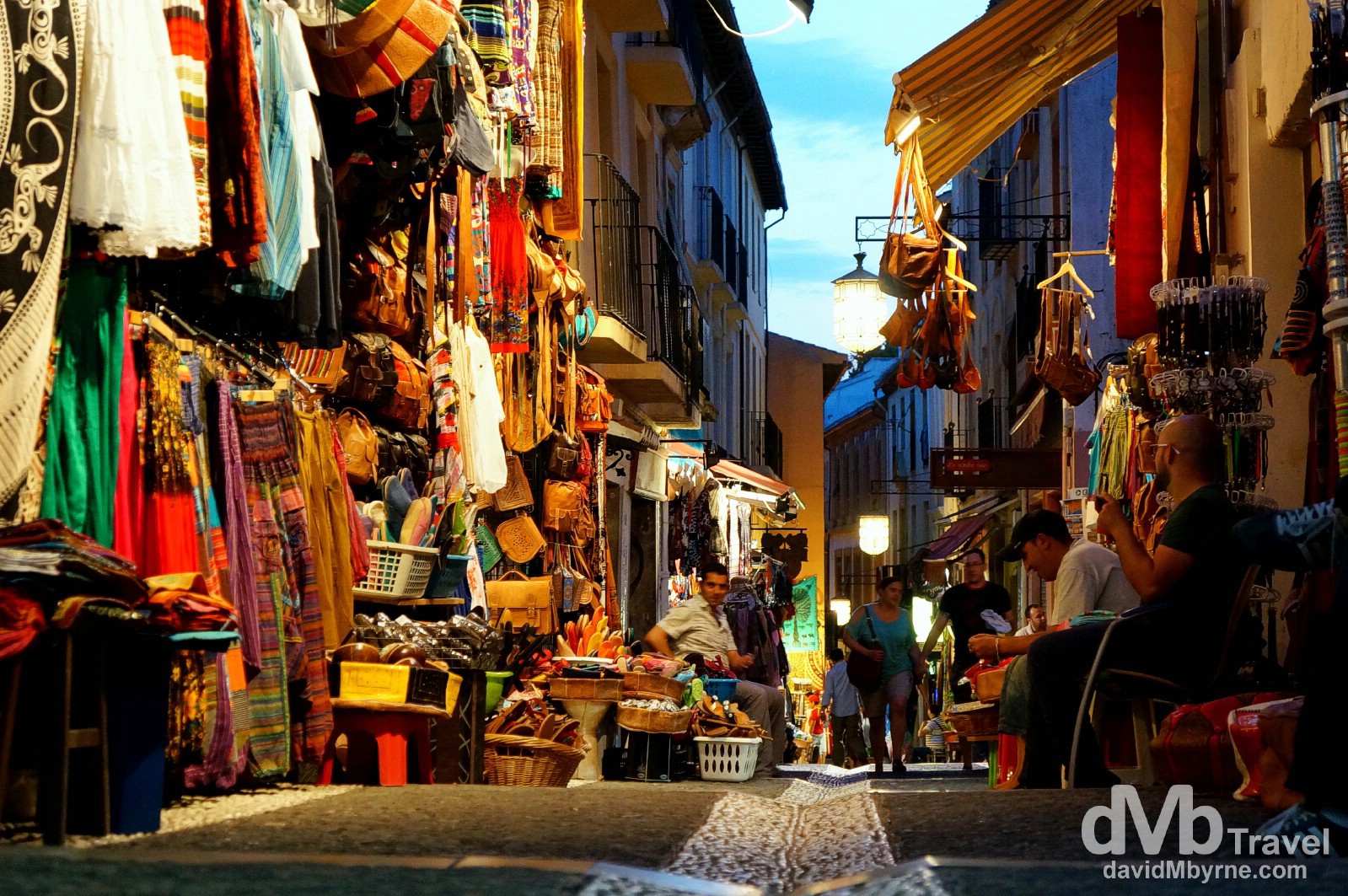 The Albayzin district of the city is Granada’s old Muslim quarter. This area of steep, winding lanes survived the Christian conquest in 1492 and was granted UNESCO World Herritage status, along with the Alhambra & Generalife gardens, in 1984. The sights, sounds & smells when walking through here reminded me of walking medina lanes in Morocco, although this for-tourists area in Granada is a lot quieter, cleaner and smaller version of medina lanes found anywhere in Morocco that I happened to meander through. Albayzin, Granada, Andalusia, Spain. June 11th, 2014

Despite the development that followed the Christian conquest, the Albayzín still bears witness to the medieval Moorish settlement, as its urban fabric, architecture and main characteristics (form, materials, colours), were not changed when it was adapted to the Christian way of life, to survive as a remarkable example of a Spanish-Moorish town. 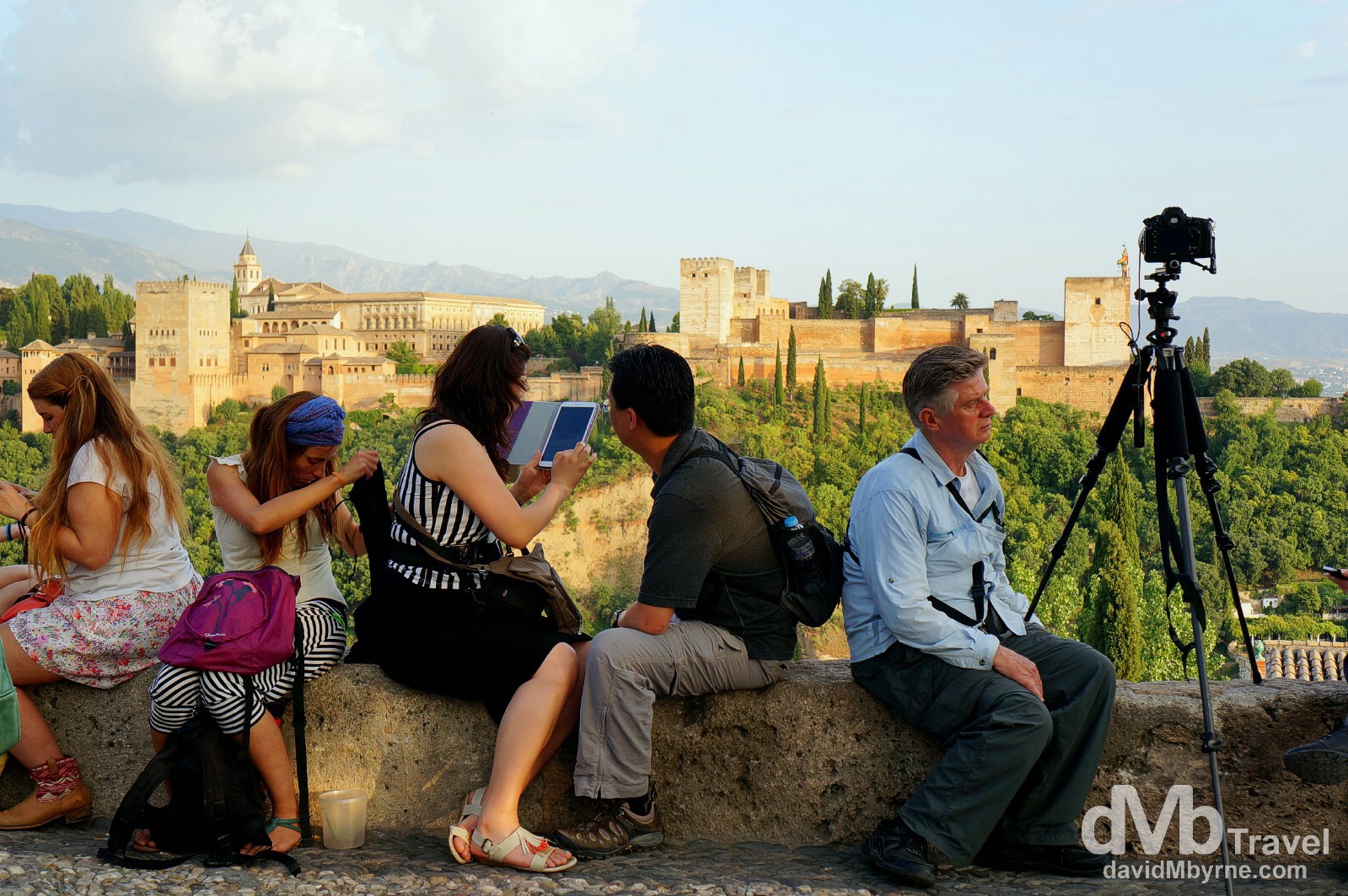 People at the Mirador (Gazebo) San Nicolas viewing the Alhambra at sunset from the UNESCO listed Albayzin district of the city across Granada’s Darro Valley. This is a busy place at sunset and photographers here run the gamut from those with serious gear to those with tablets. Most seem in jovial mood although the guy with the serious rig seen here certainly didn’t look like he was enjoying the wait for the light on this day to die. Mirador San Nicolas, Granada, Andalusia, Spain. June 11th 2014

Needless to say there are quite a few churches in this city. I visited a few and decided against visiting others. 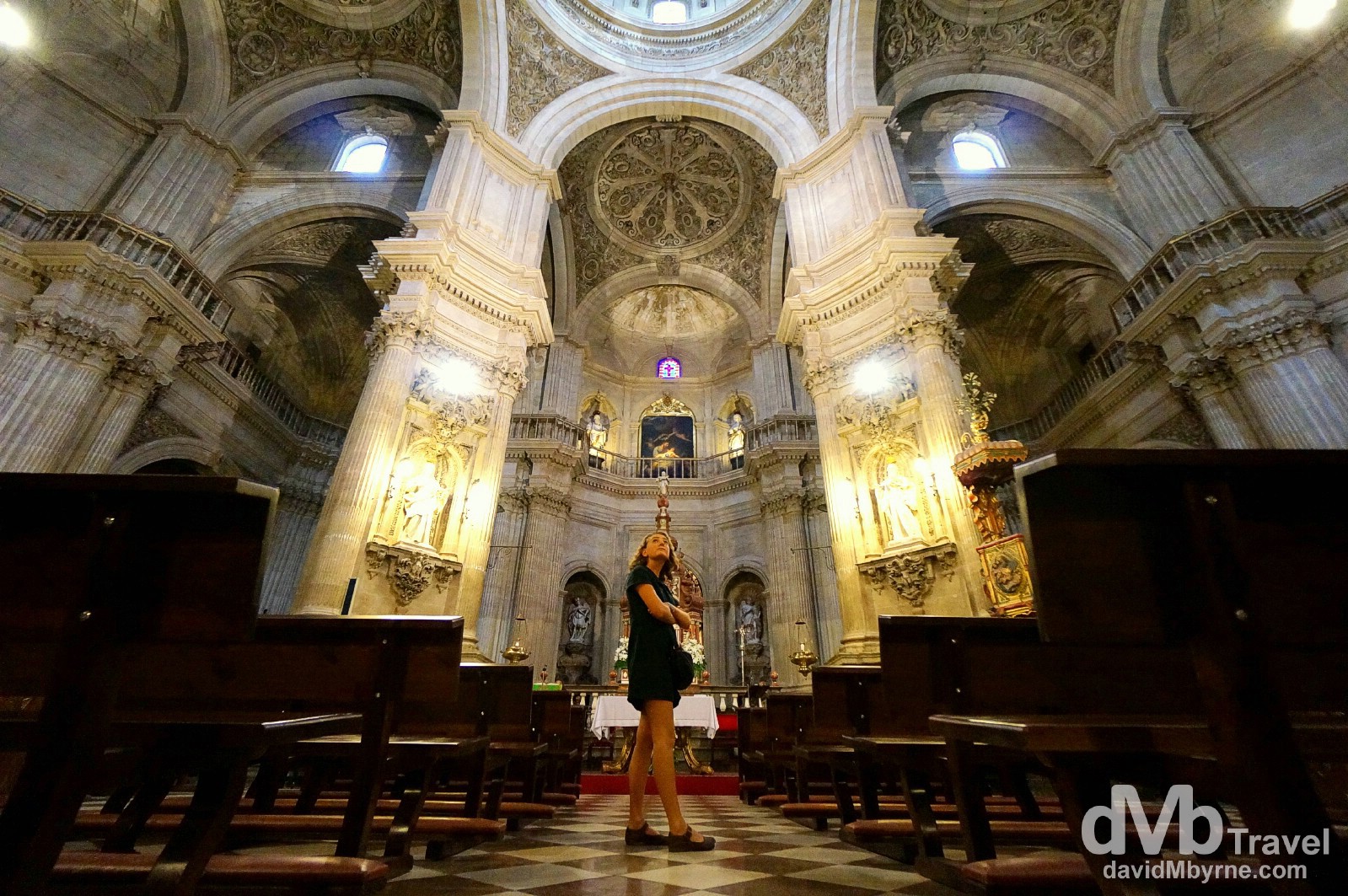 Viewing the inside of the 16th century Iglesia del Sagrario, the first church I visited in Granada. This church, built between 1705 & 1722, occupies the site where the major city mosque used to stand and is built to a smaller scale of the model by which St. Peter’s Basilica in Vatican City is built – a Greek cross inside a square. Granada, Andalusia, Spain. June 10th, 2014 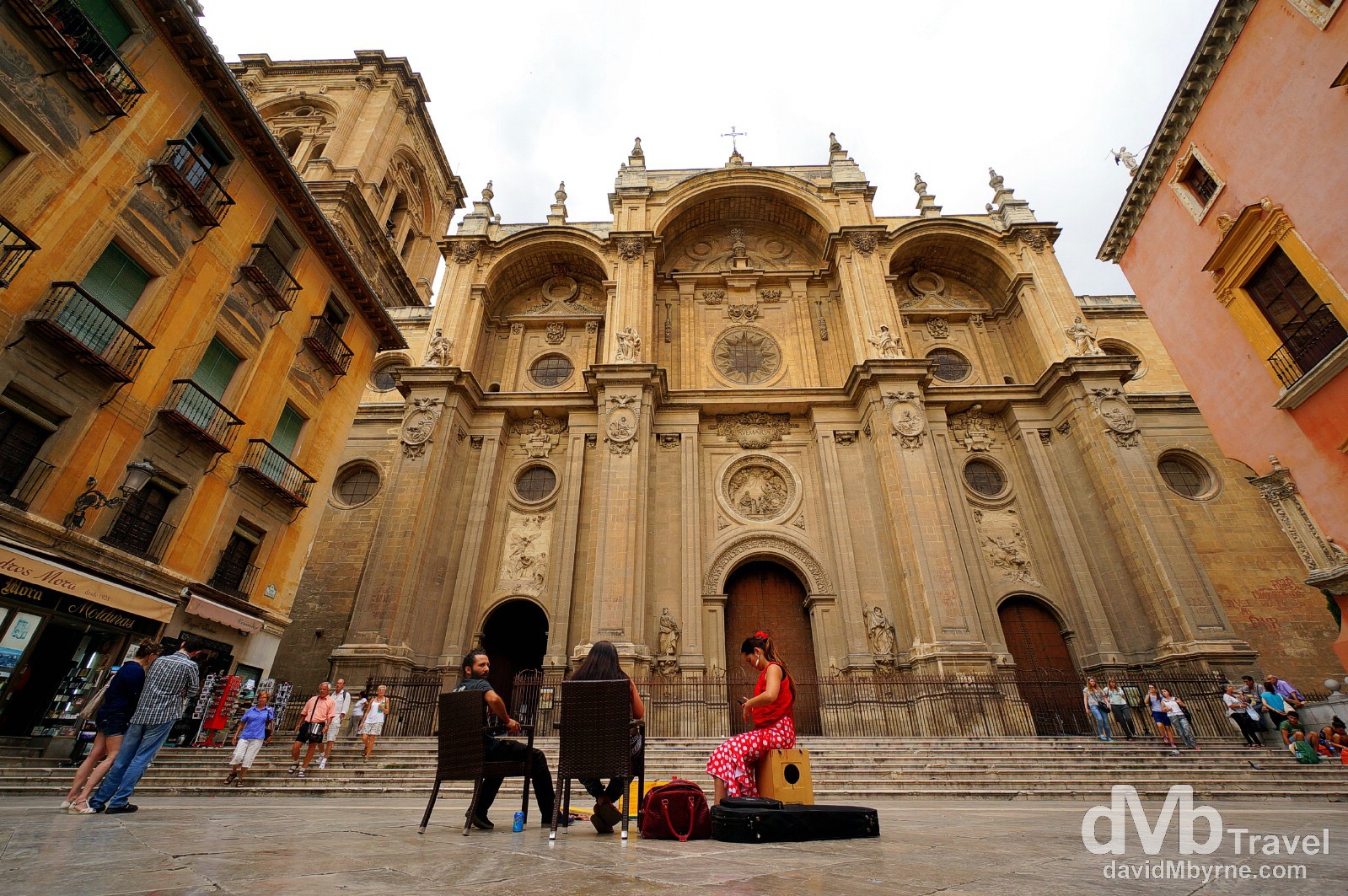 The facade of the Catedral de la Anunciacion, Granada’s main church, as seen from Plaza de las Pasiegas. A Gothic-Renaissance hulk built between 1522 and 1704 this is, according to the information post fronting it, one of the most impressive temples of the Spanish Renaissance. Its façade is certainly impressive – 4 heavy buttresses forming three great arched bays conceived as a colossal triumphal arch. I’ve yet to take a look inside and doubtless I will – its €4 to enter and I have issues paying to enter a church given the undeniable wealth of the Catholic Church. Plus, & even after paying, photography is not permitted. Plaza de las Pasiegas in Granada, Andalusia, Spain. June 10th, 2014 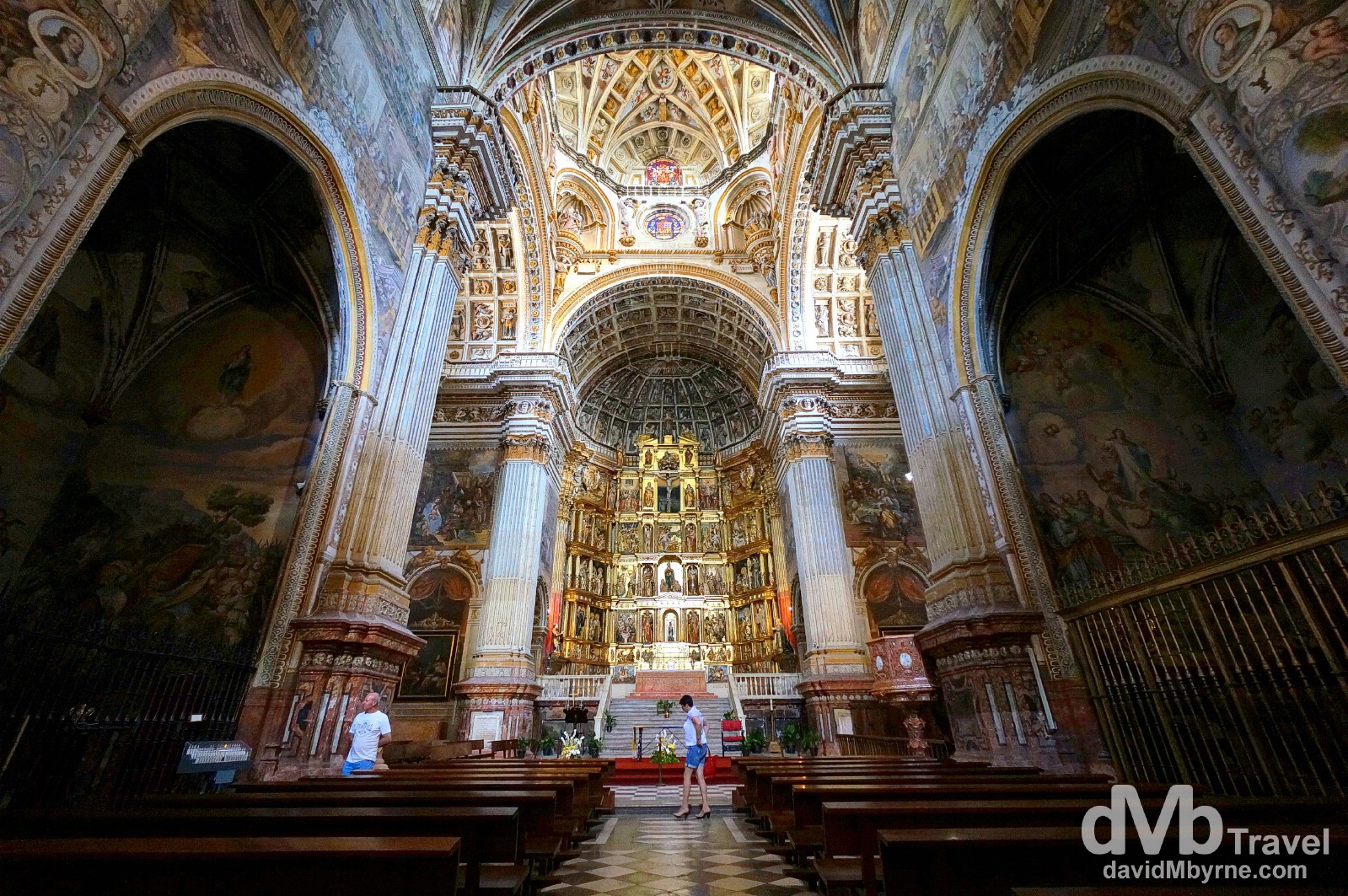 I did pay €4 to enter here (photography was allowed) and I’m sure glad I did as this was/is my church highlight from the city, the astonishing interior of the church of the Monasterio de San Jeronimo. Granada, Andalusia, Spain. June 11th, 2014 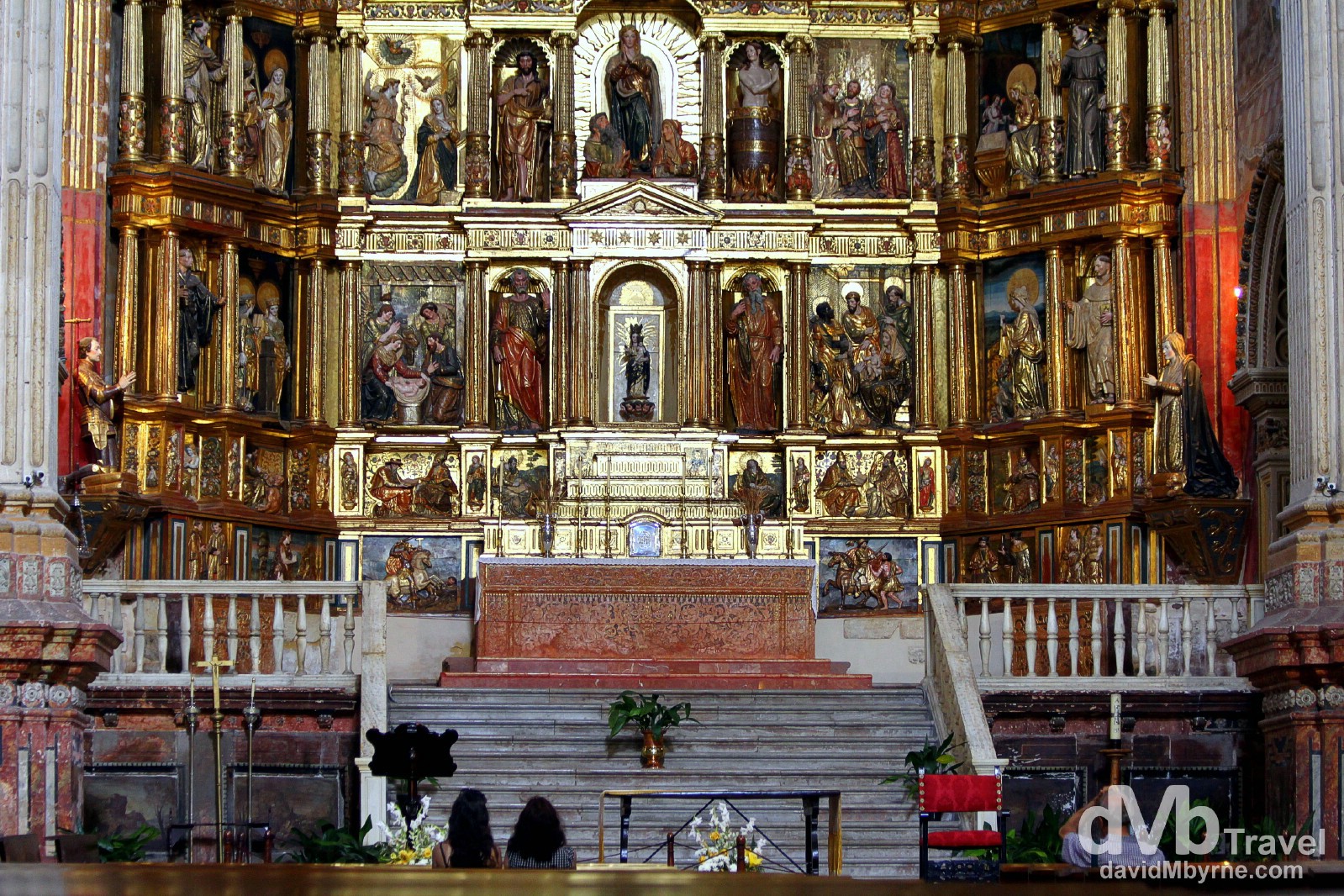 The detail of all areas of this church, but especially the altar area, are amazing. The church of the Monasterio de San Jeronimo. Granada, Andalusia, Spain. June 11th, 2014

Finally, a few Alhambra & church-free pictures from my time in Granada. 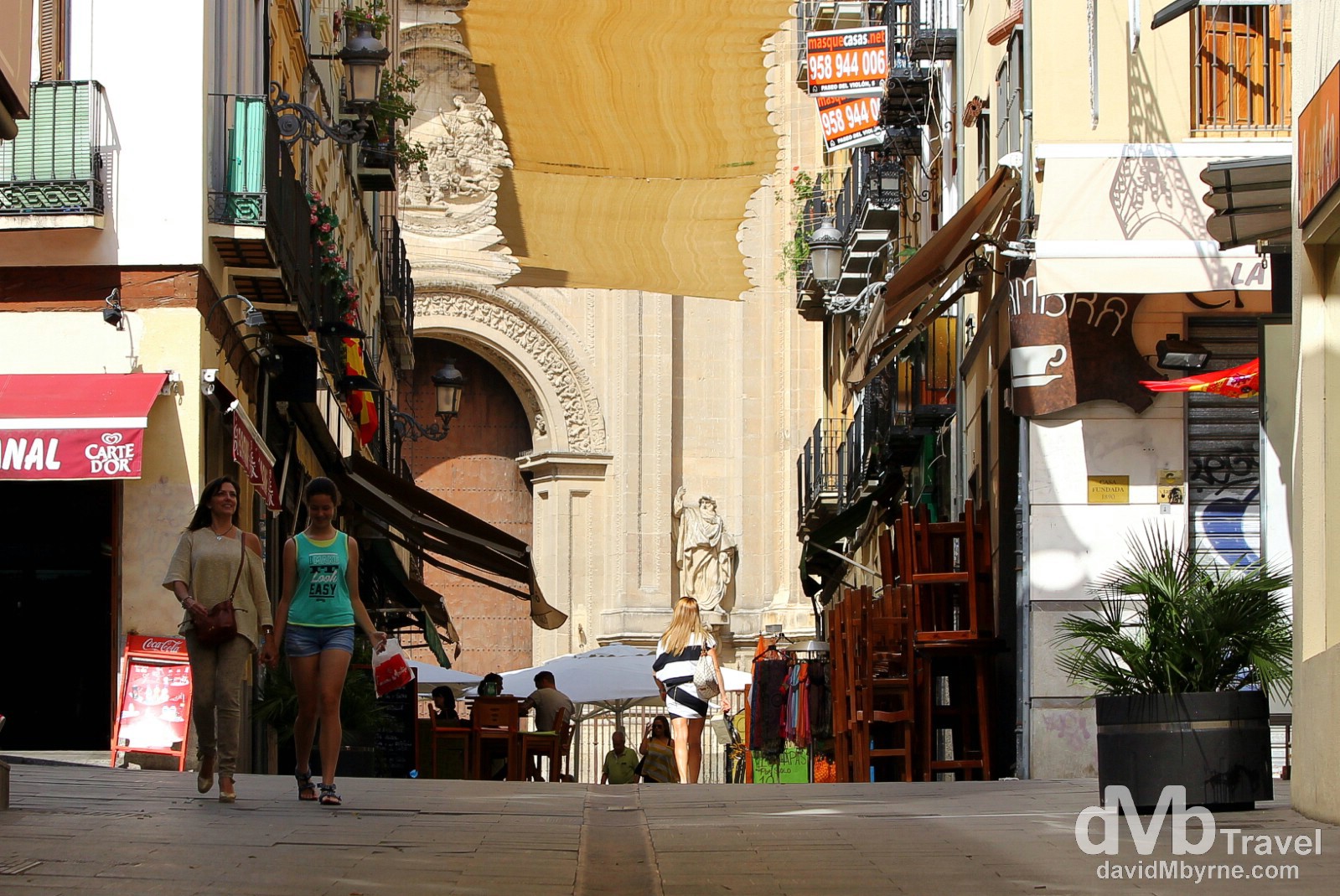 Calle Paz, a small pedestrianised street leading to Plaza de las Pasiegas & the façade of the Catedral de la Anunciacion. A lot of the streets here in Granada, both vehicular & pedestrian, are shielded from the sun thanks to large, overhead netting. Another nice Granada touch. Granada, Andalusia, Spain. June 10th, 2014 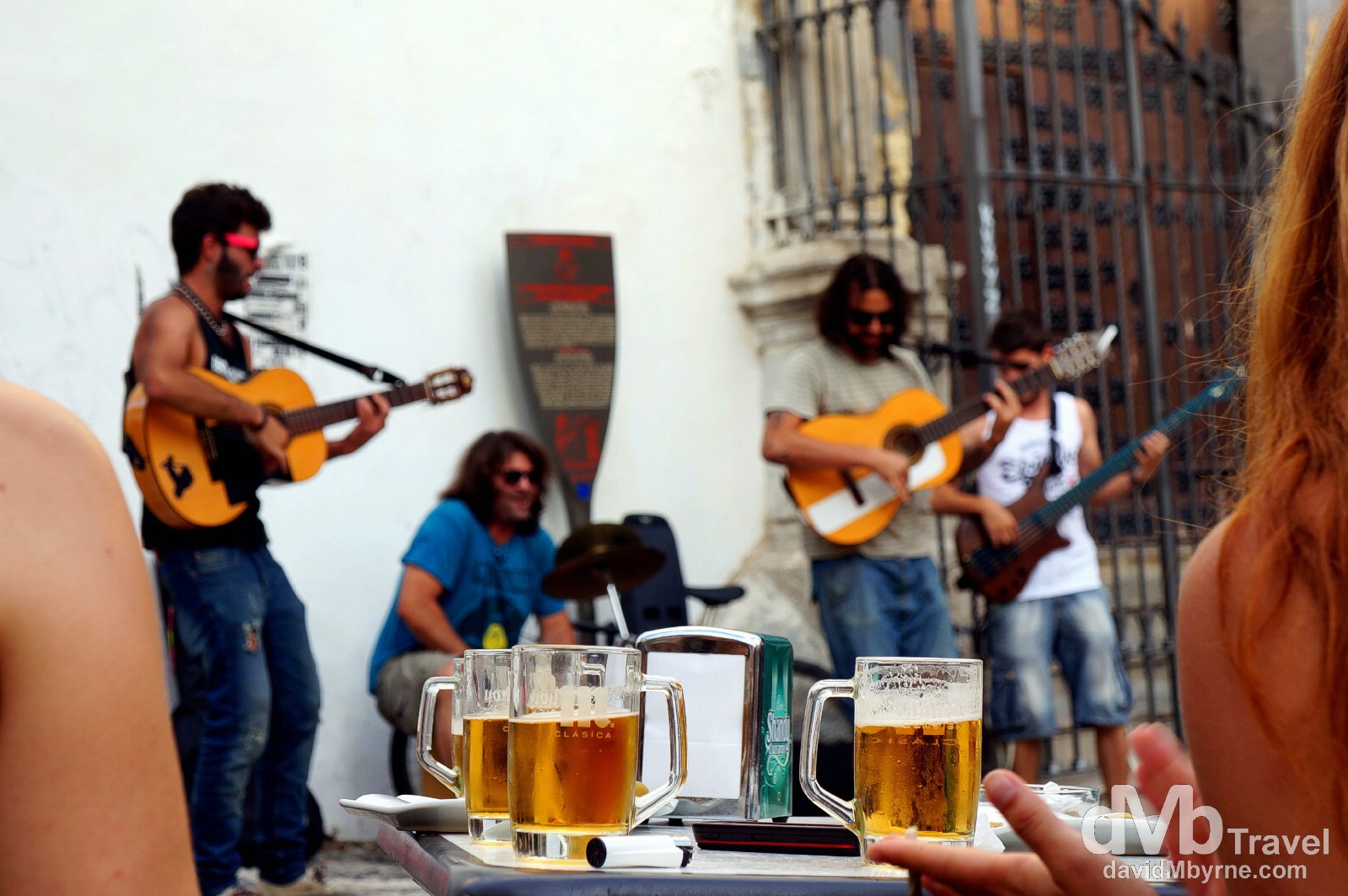 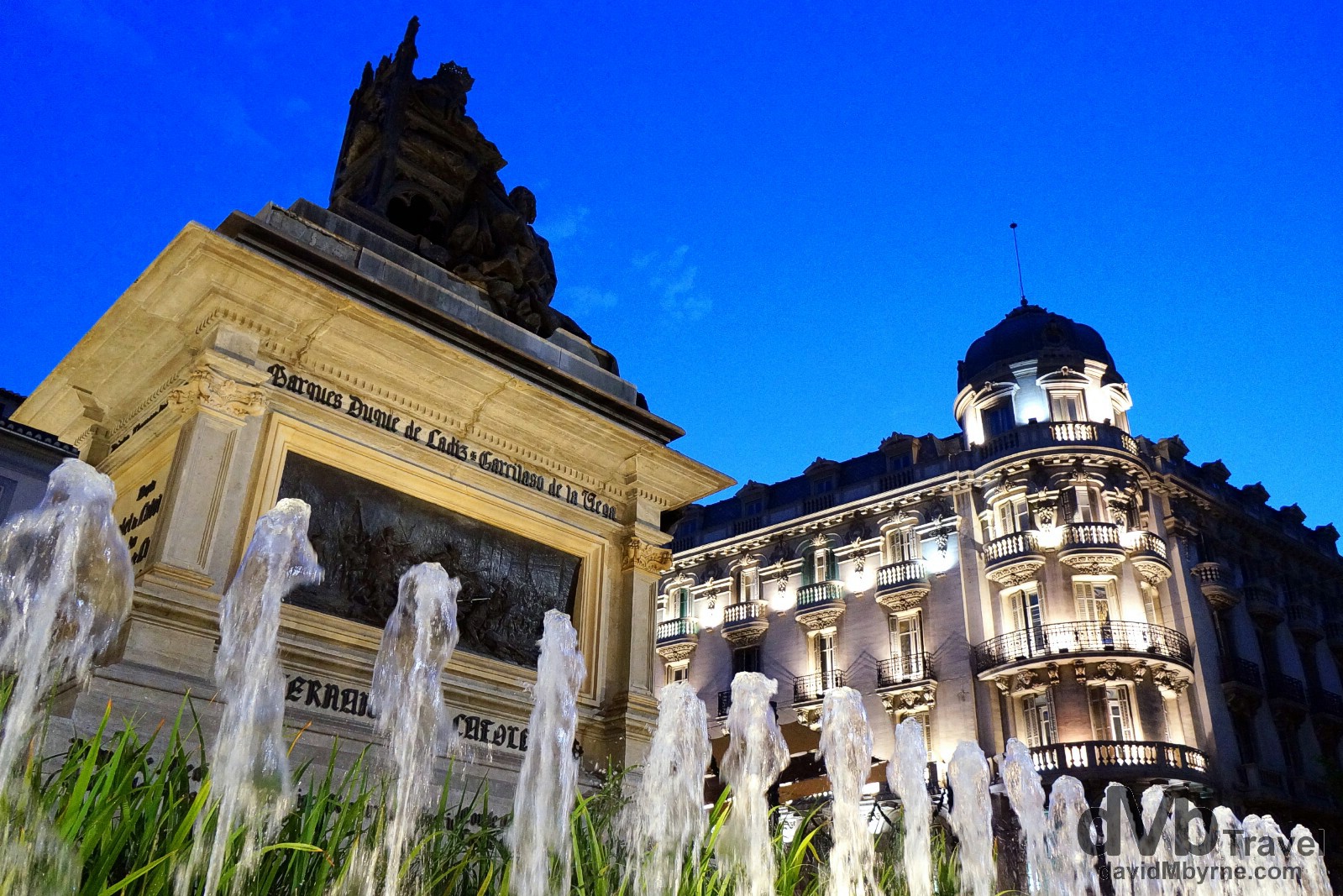 Adios Andalusia
And just like that my 9-night stay in Andalusia, and 3-night stay in Granada, has come to an end, or it will have by the time I wake in the morning. I don’t have many plans for today, my last day in Granada. I’ll probably find a bar later tonight to watch the first game of the World Cup & tomorrow I’ll get the bus north to the Spanish capital of Madrid, a city I have been to before but not since way back in 1992. Spain play their first World Cup game tomorrow night & soaking up the atmosphere of that occasion is all I have planned for the capital just now.