I ’ve been kept busy of of late looking around the Spanish capital of Madrid, somewhere I last visited way back in 1992.

The last three days have been up early, late to bed & with lots of traipsing & sightseeing in between kind of days. In the June heat it has been exhausting but thoroughly enjoyable at the same time. Madrid is a beautiful city, one chockful of world-class museums, gorgeous parks, plazas galore & beautiful architecture, the latter being the definitive standout memory not to mention highlight of the city for me. 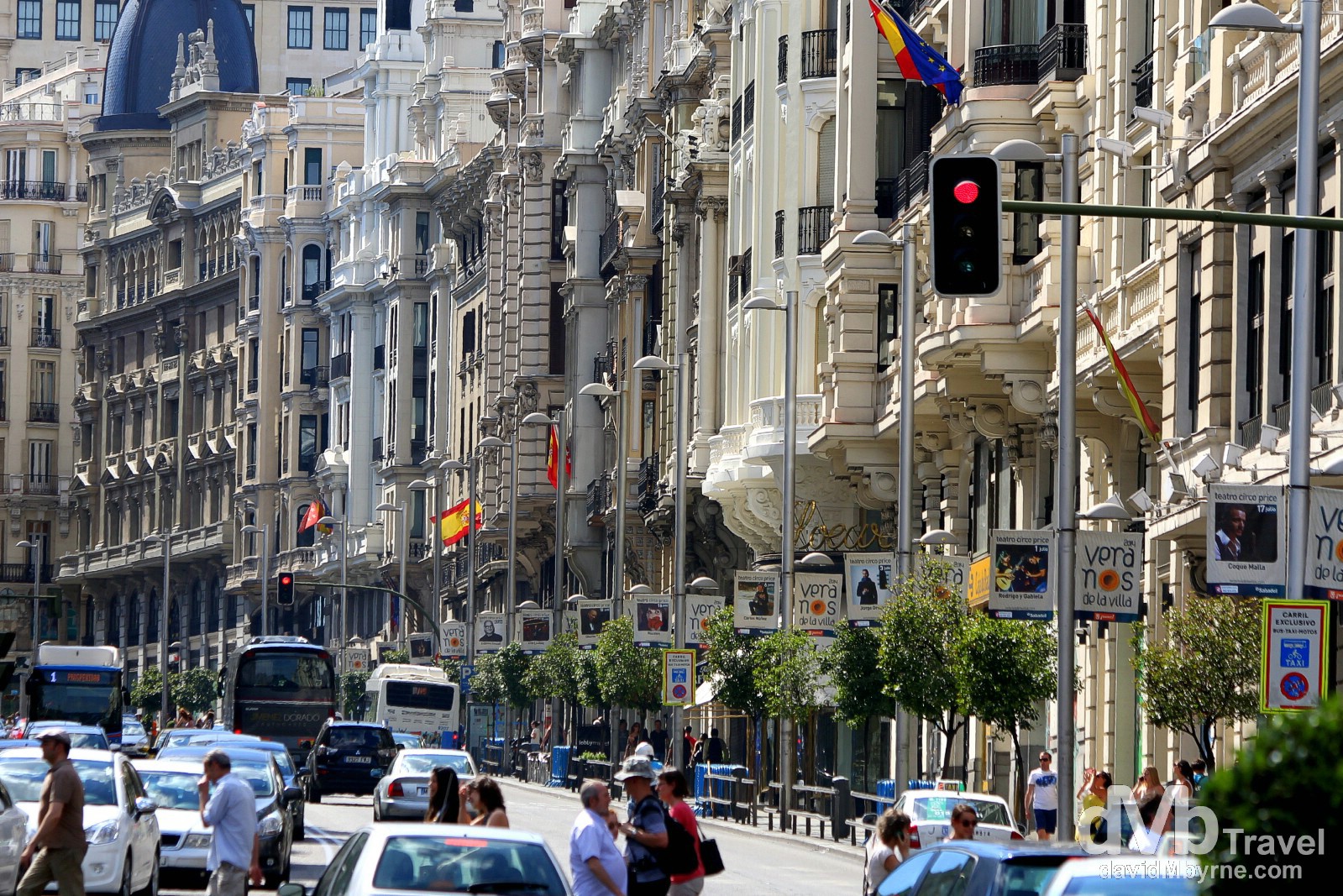 Gran Via, which has only been around since 1911, is the main east-west thoroughfare in the city. It is lined with gorgeous buildings, much like the rest of the city. The wealth of stunning architecture in Madrid didn’t come as much of a surprise to me having travelled through the Latin American region (Mexico & Central America) last year, regions the Spainish colonised & riches from which they used to fund their grandiose building projects back home. Gran Via, Madrid (

Madrid To-Dos
Madrid is a big city. With limited time in big cities one needs to be selective about where to go & what to see. One needs to be informed. One needs a to-do list. Shortly after arriving in the city off the bus from Granada I was sitting in a cafe informing myself & producing a to-do list for the three days I had at my disposal. I’m not very good at being selective so what I ended up with was a long, wholly overambitious list. But I gave it go. I delved into the city and crammed a lot into the last three days, striking off most of what I had jotted down in the corner of my free (& now very worn & tattered) foldout esmadrid.com map while sitting in that cafe three days ago now.

I didn’t have time to look at my Madrid images over the last few days never mind post any. I’m en route to Barcelona now, my last stop in Spain & last stop on this European leg of my 2014 travels. But before I get there here’s an 18-picture pictorial look at my time in the city, a figure that should go someway to proving what I’ve already stated – that Madrid is a beautiful city & that I’m not very good at being selective. Nope, not very good at all. 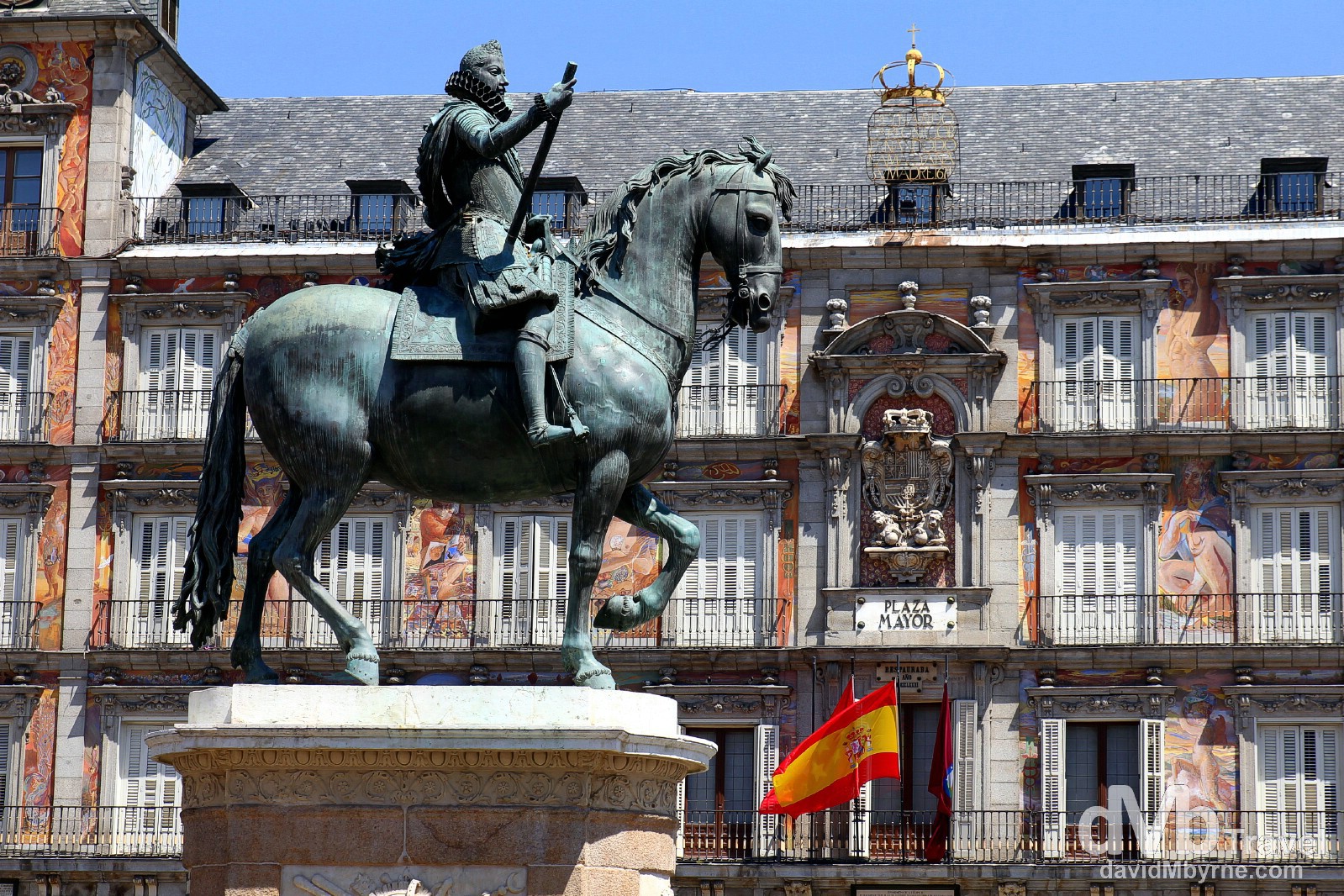 In a city full of plazas, the grand arcaded Plaza Mayor is arguably the city’s most beautiful public space. The 129 m x 94 m rectangular plaza, which is enclosed by (mostly) three-story (mostly residential) buildings with charming wrought-iron balconies, is dominated by the four-story Casa de la Panadería (Royal Bakery), a municipal and cultural building on the plaza’s north side adorned with exquisite frescoes as seen here. The building was erected at the same time as the plaza, between 1617 & 1619 during the reign of King Philip III, hence the 1916 mounted statue of Philip found in the centre of the plaza today. Madrid, Spain. June 14, 2014.

The combination of stunning architecture and feel-good living has never been easier to access than in the beautiful plazas (squares), where terrazas (cafes with outdoor tables) provide a front-row seat for Madrid’s fine cityscape and endlessly energetic streetlife. 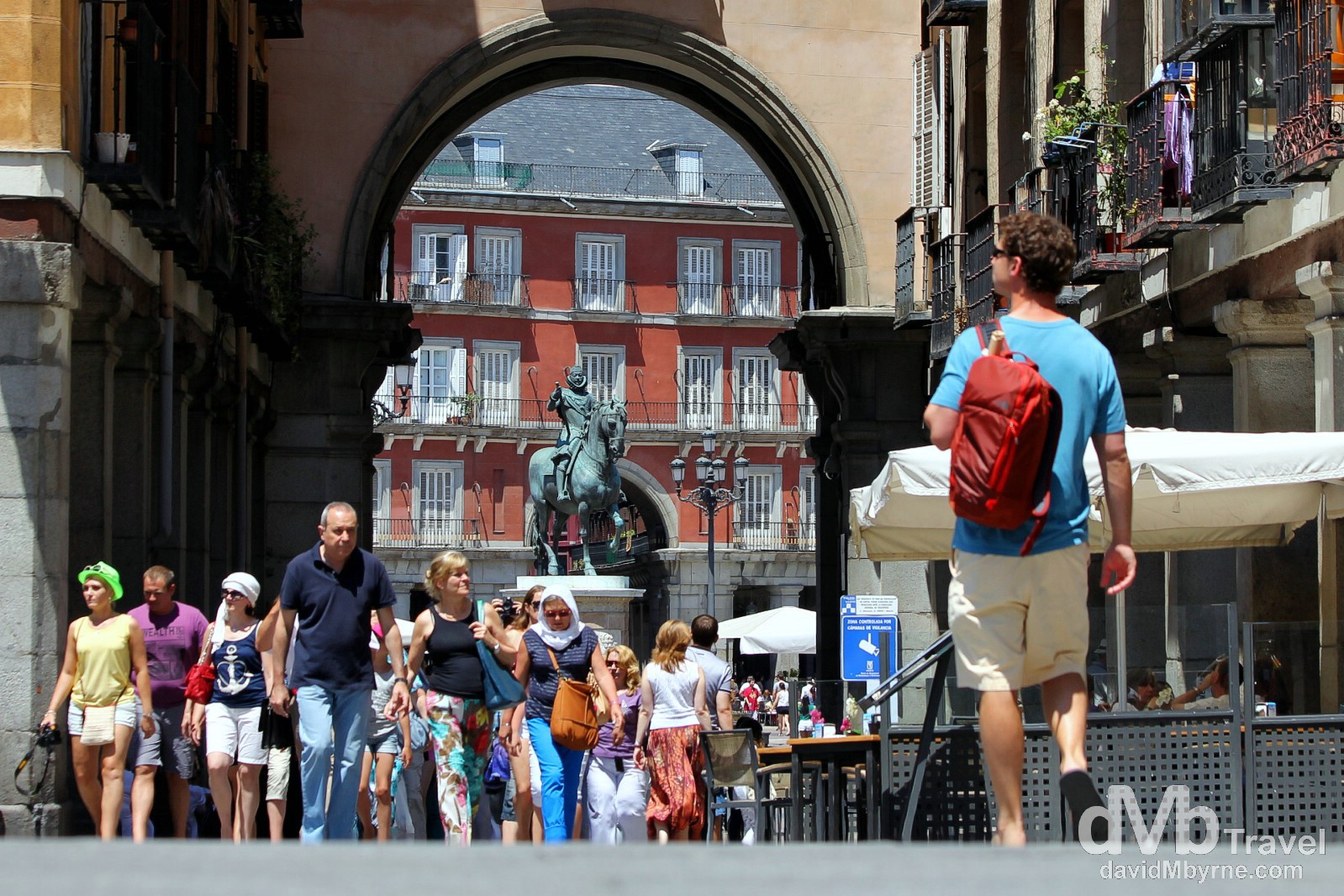 Looking towards one of the nine arched entrances of Plaza Mayor as seen from Plaza de Santa Cruz, a square off a square in central Madrid, Spain. June 14, 2014. 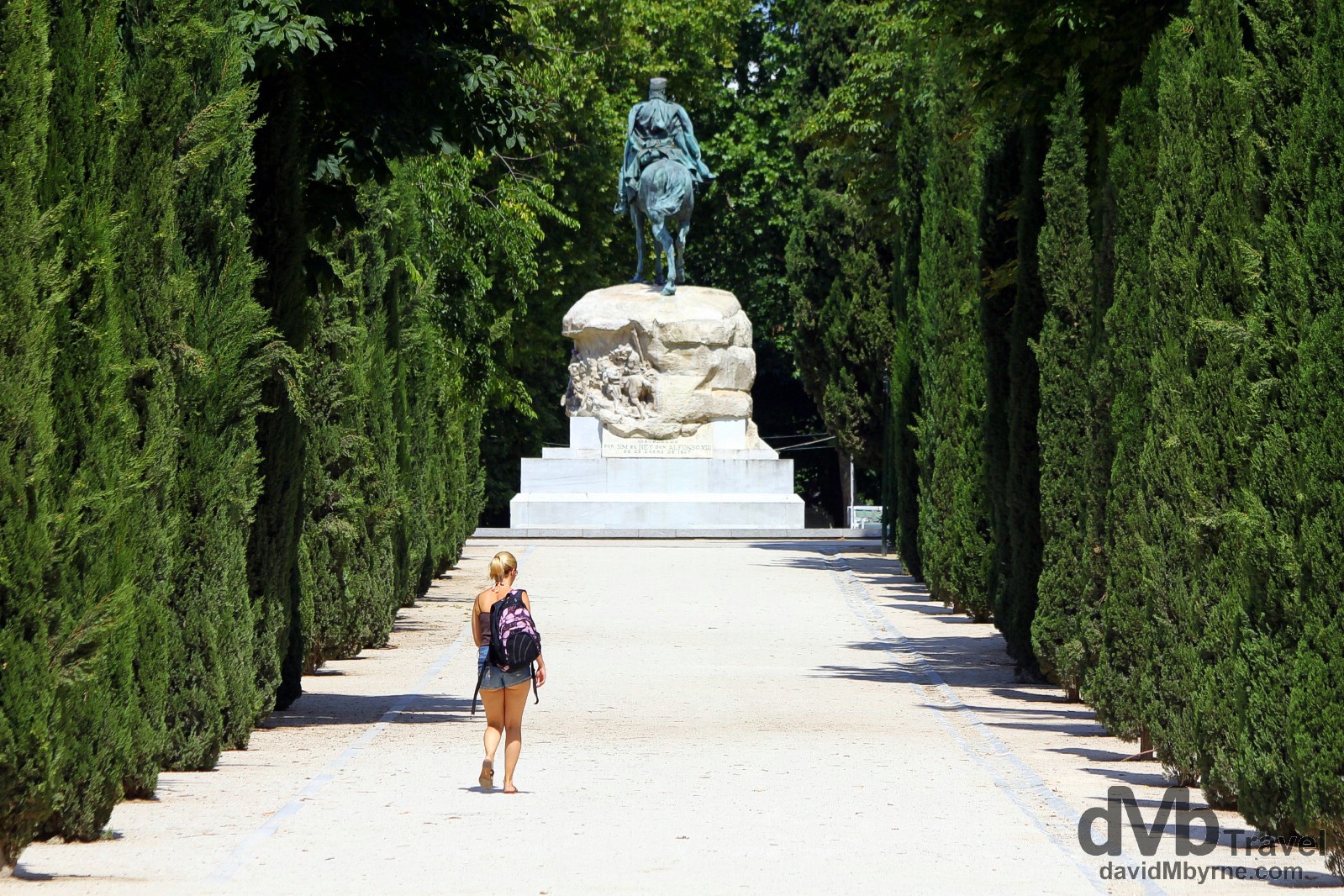 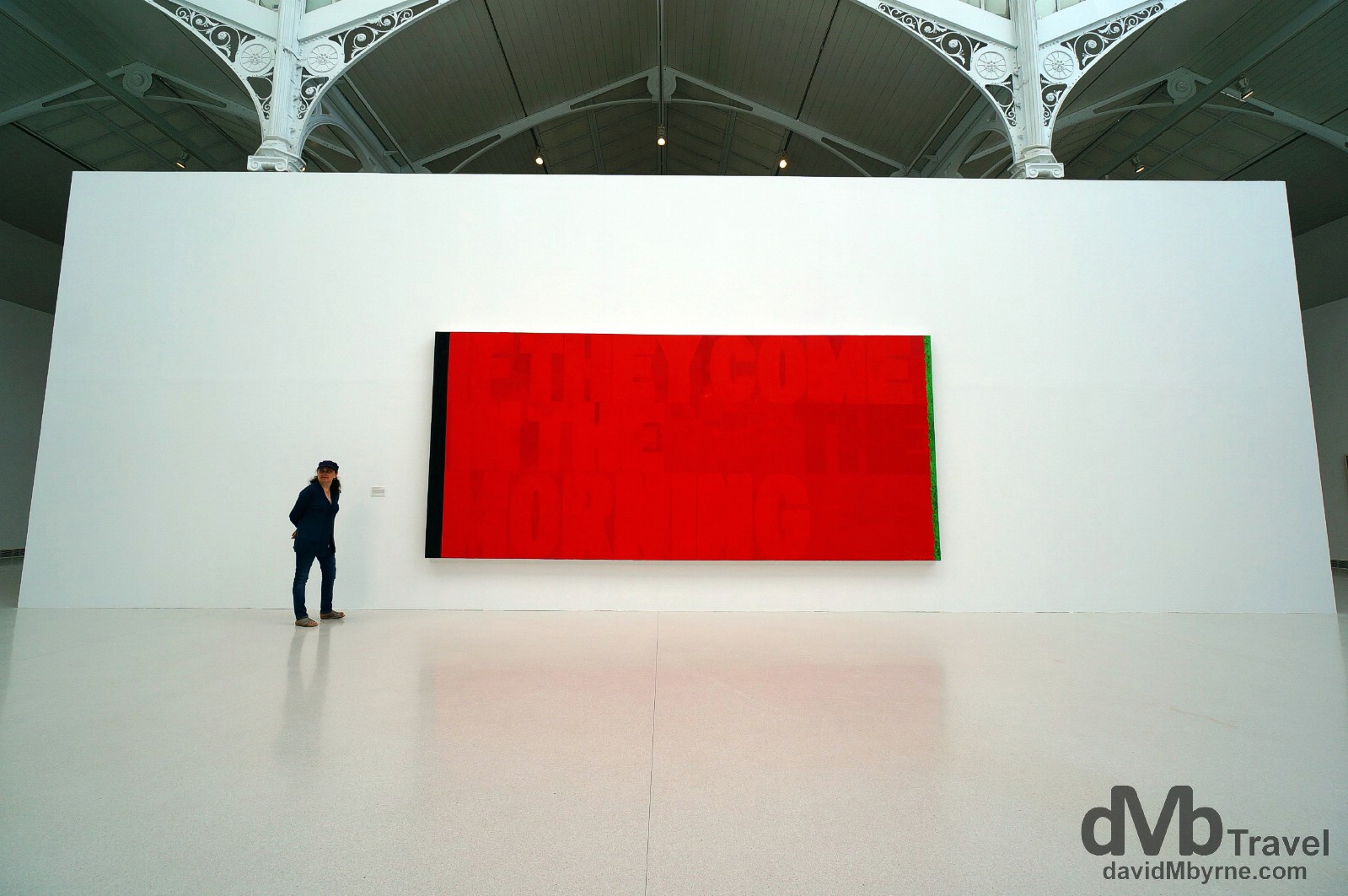 A 2011 piece entitled Red (If They Come in The Morning) on display during a temporary art exhibition in Placio de Velazquez, one of two elegantly restored buildings in Parque del Ritiro (the other being the massive, oppressively hot glasshouse-esque Palacio de Cristal) that seem to be struggling to serve a full-time purpose. Parque del Ritiro, Madrid, Spain. June 14, 2014. 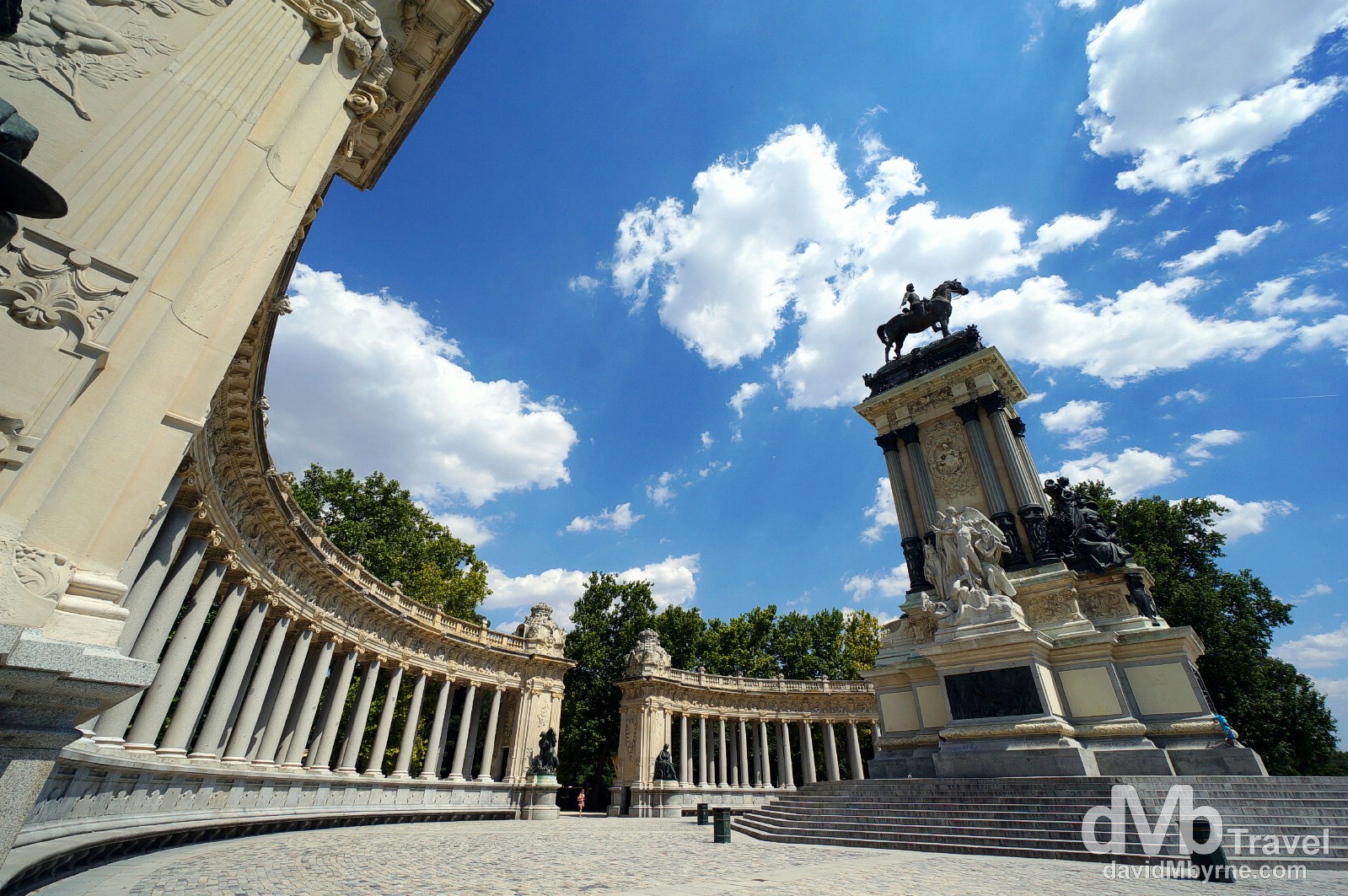 The colossal Monumento Alfonso XII (Monument to Alfonso XII) in Parque del Ritiro is probably the city’s largest ornamental monument – measuring 30 metres high & almost 100 m across, it is certainly the largest such structure I saw while snooping around the city. Its central column is topped by a bronze mounted statue of the man himself, King Alfonso XII (reign 1874-1885). The monument was unveiled in 1922 and it overlooks the park’s central artificial estanque (lake), a popular boating spot. Madrid, Spain. June 14, 2014. 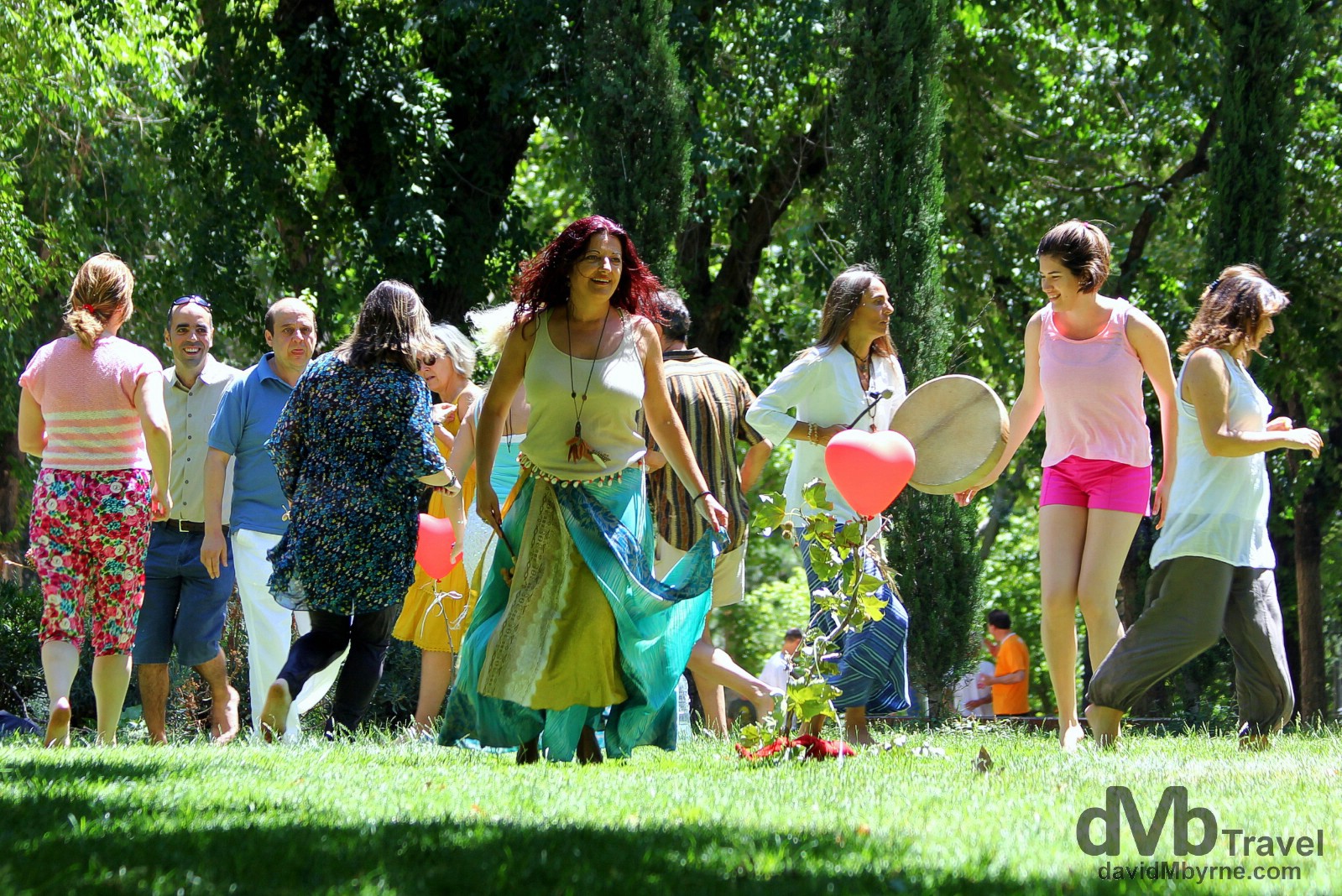 On a happy buzz in Parque de la Montana (Mountain Park). This park overlooks Madrid’s Palacio Real (Royal Palace, see later picture) and is the location of an authentic 2,200-year-old Egyptian temple (honest) gifted to Spain from Egypt in 1968 as a token of Egypt’s gratitude for the aid Spain provided in rescuing the temples of Abu Simbel which needed relocating as a result of the creation of Lake Nasser following the construction of the Aswan High Dam on the Nile River. As fascinating as seeing such a structure atop a hill in the middle of a park in Madrid was, it was seeing these folk dancing in a circle all fairies-down-the-end-of-the-garden-like that was the undoubted highlight of the visit to the park for me. A happy buzz indeed. Parque de la Montana, Madrid, Spain. June 15, 2014.

Madrid has some world-class museums & some of the finest art galleries in the world with two in particular, only a short walk apart, grabbing all the headlines (& most of the crowds) – the Museo del Prado & the Centro de Arte Reina Sofia. I’m not much of an art gallery kind of tourist but I paid a quick visit to both of the aforementioned gallery heavy hitters, visiting both in the evening when for a few designated hours entry is free. 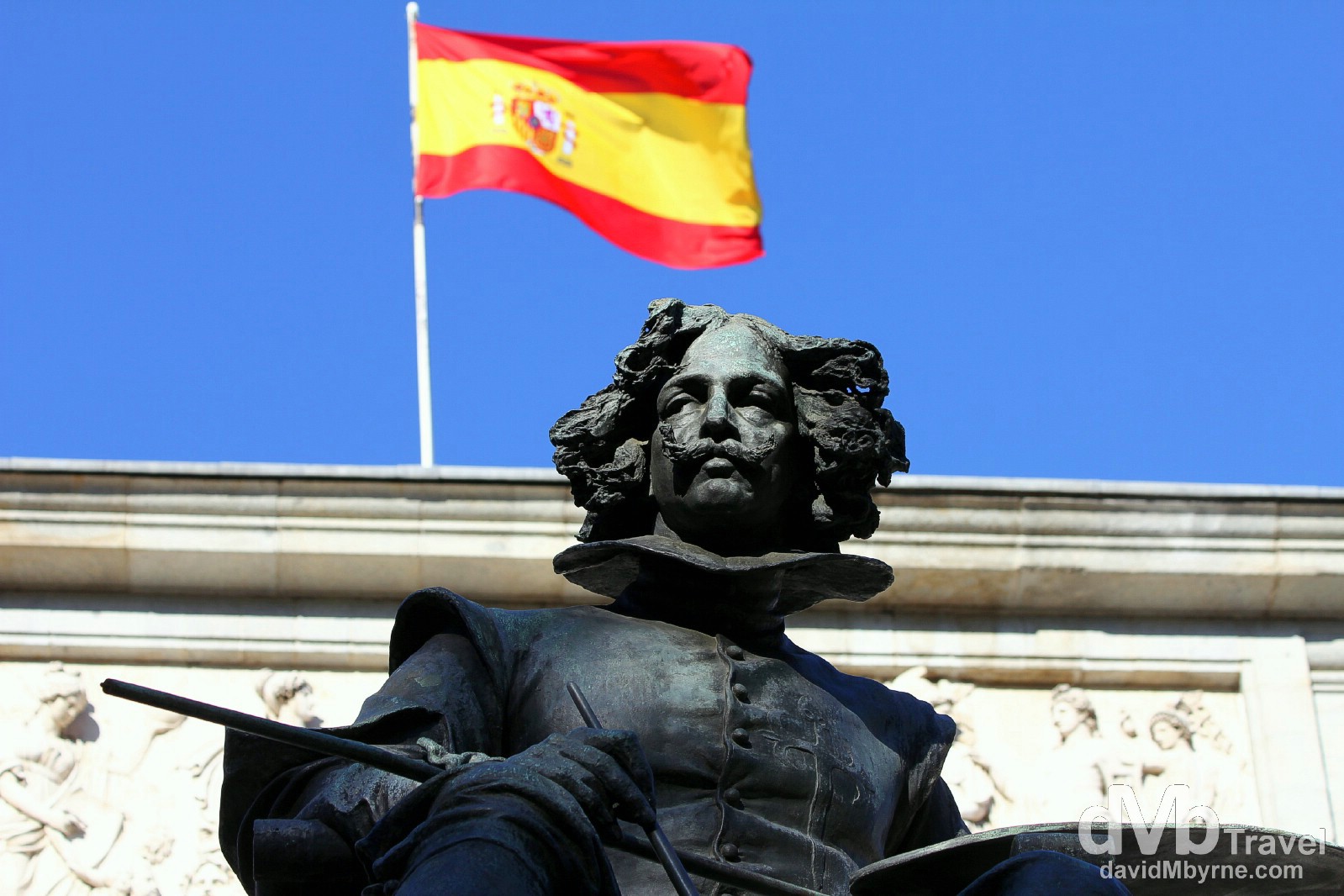 Photography is not permitted in the Prado, where I wouldn’t have minded taking a few pictures, but is permitted in certain sections of the Reina Sofia, where I wasn’t bothered (it was towards the end of a long day). But I did take this picture of a statue fronting the gorgeous building housing the Prado when moving between the two undoubtedly impressive museums. Madrid, Spain. June 14, 2014.

As I discovered, Sunday is a great day to be in Madrid, especially during the summer months. If you happen to be around on a summer Sunday you can, as I did, visit Europe’s largest flea market & take in some bullfighting. 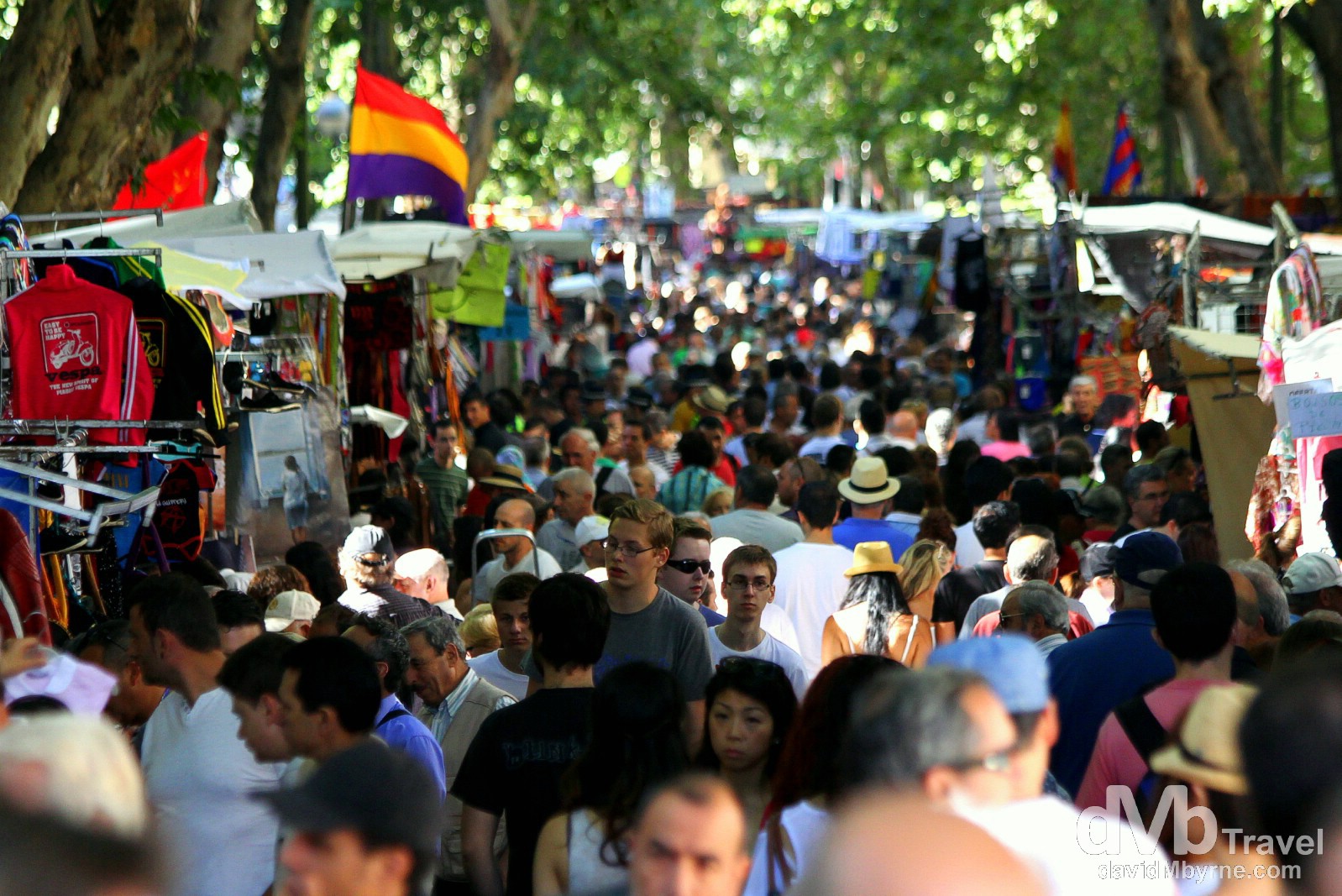 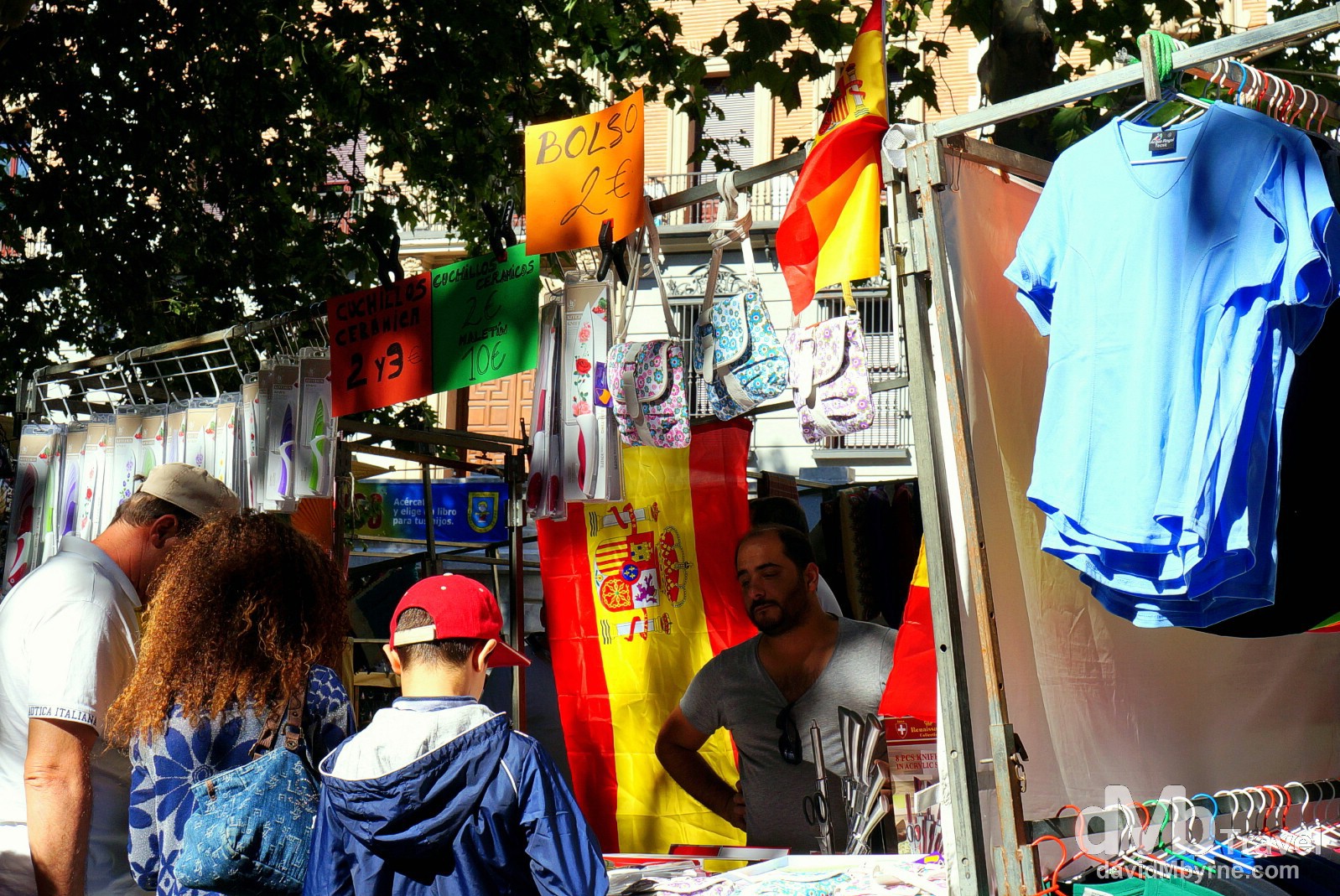 Being in Madrid on a Sunday between mid-May & October means you can pay a visit to the city’s Plaza de Toros bullring, the stage upon which every Matador worth their tight tights & sequence dreams of prancing about while swinging their cape in a bid to tire out & eventually kill bulls for the appeasement of certain sections of the crowd who seem to think the spectacle is fun – it’s far from fun for the hapless bull. 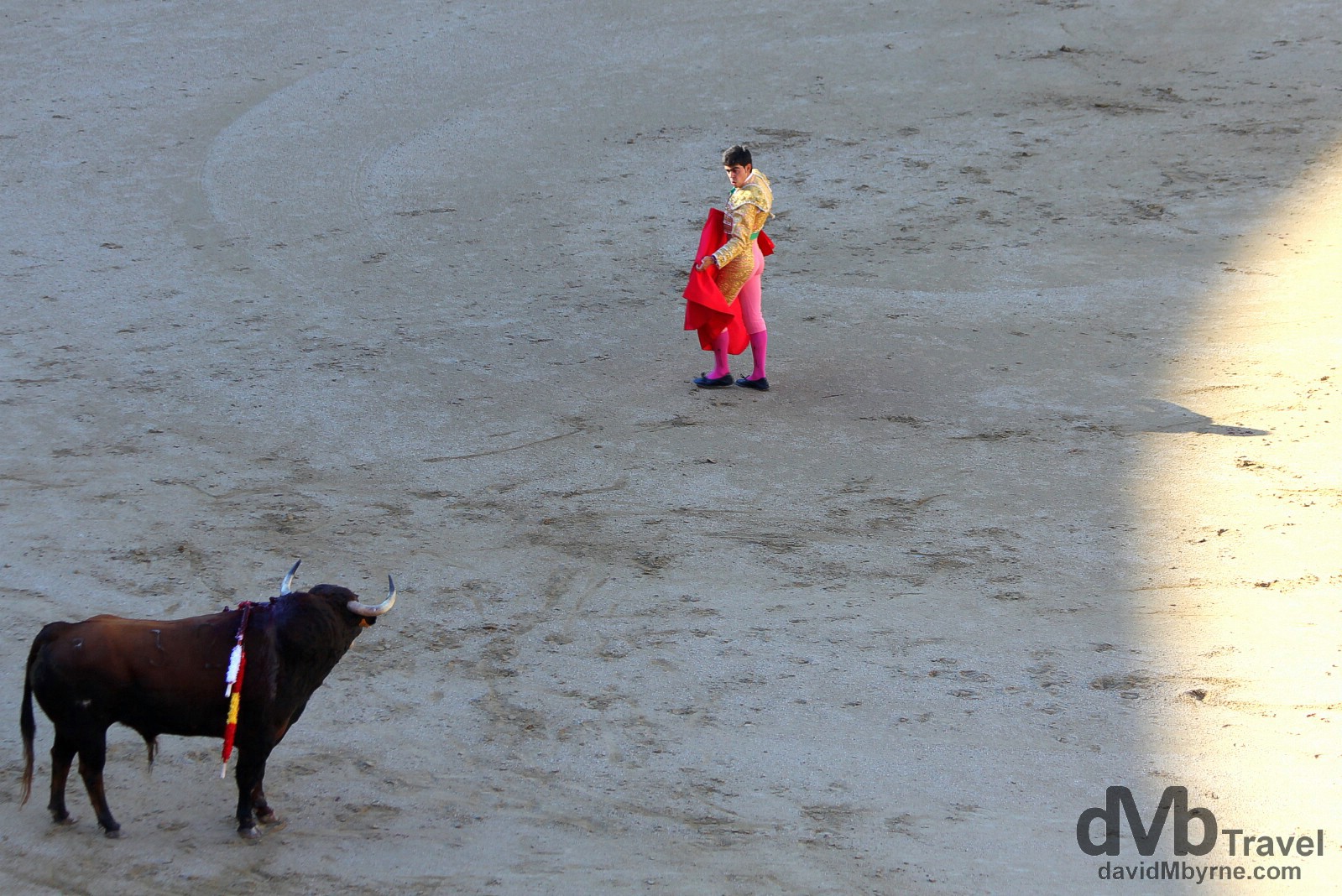 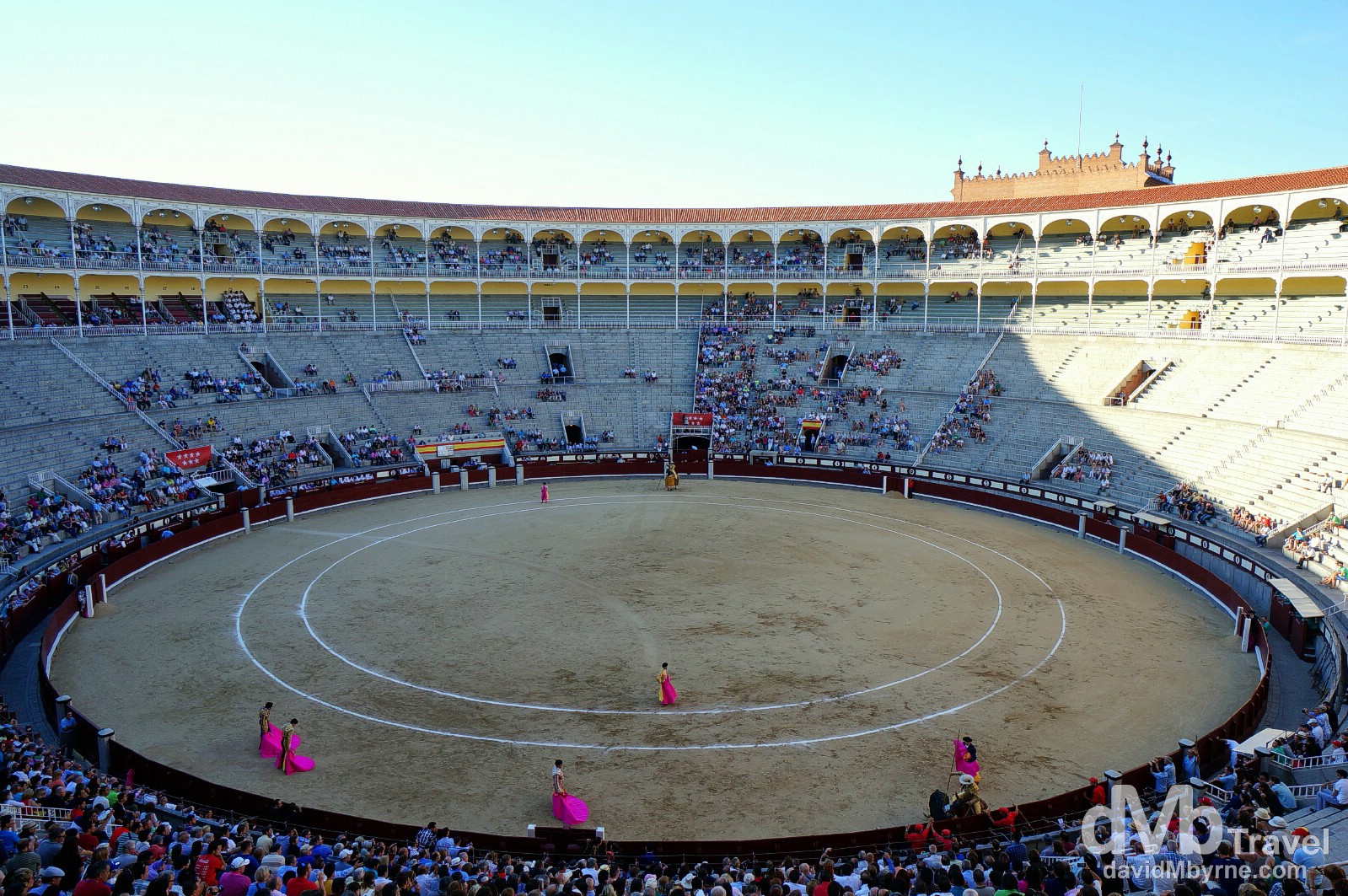 The 24,000 capacity, coliseum-like Plaza de Toros is the revered home of Spanish bullfighting. Needless to say this is the country’s largest bullring & the second largest bullring in the world after the Plaza Mexico in Mexico City. It was sparsely populated on this particular Sunday evening & nowhere near capacity, maybe a sign of the growing disinterest with bullfighting in Spain. Las Ventas, Madrid, Spain. June 15, 2014.

Seeing a bullfight, a Spanish tradition par excellence, was/is an eyeopener. I can’t say I enjoyed the spectacle – the buildup is repetitive & largely theatrical & the outcome barbarically obvious – but I was at least informed as to the rituals, the participants (beyond the Matador & bull), & general goings-on thanks to the audio guide included in the admission price of €15 (tickets can be had for a low as €7). 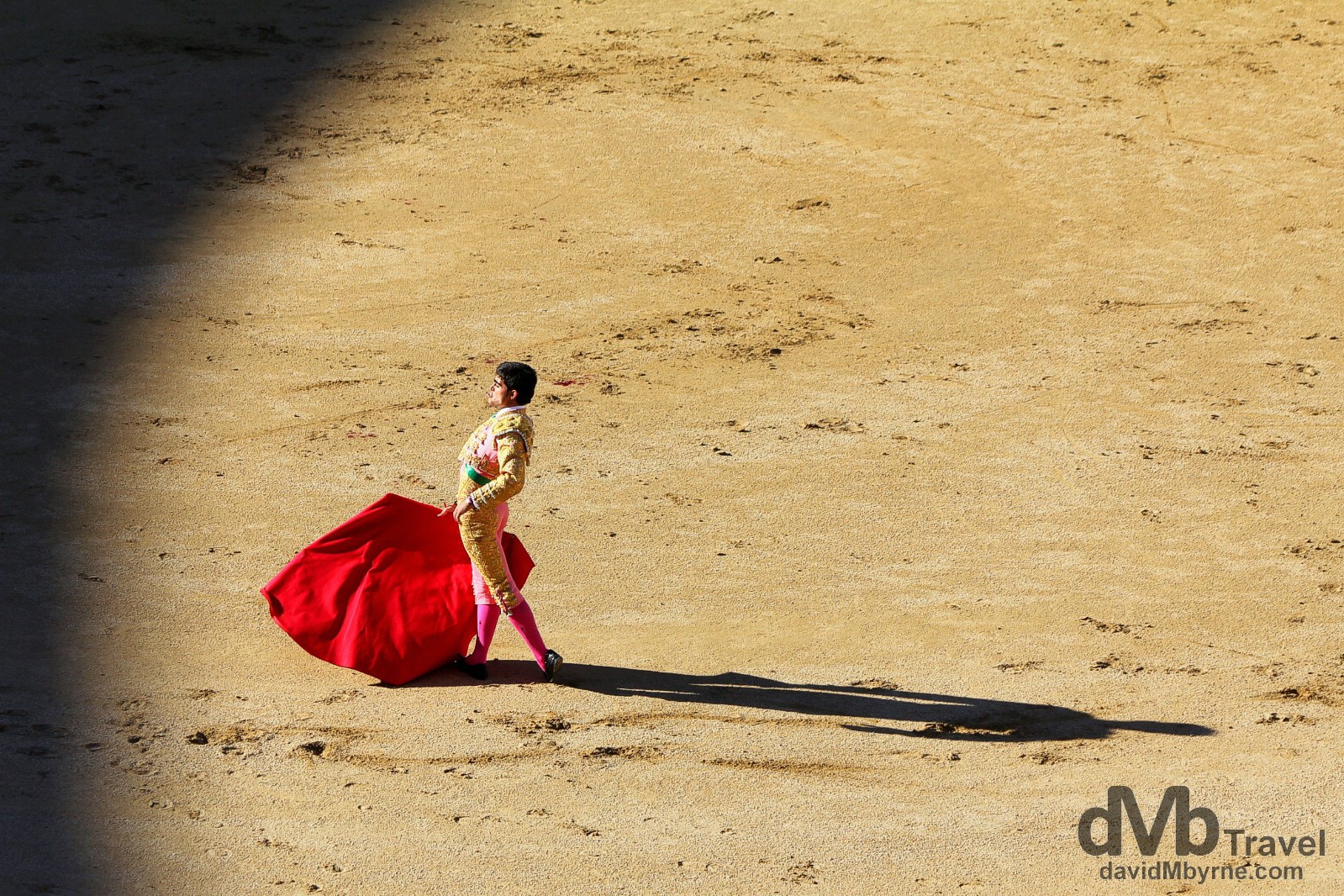 I left after the 3rd of 6 scheduled & repetitive bouts, by which time I had taken a few pictures, drank my €8.50 beer (it was a large one), & had seen enough of the prancing, impeccability turned out Matador – in his €4000 ‘Suit of Lights’ outfit – toying with the uniquely-breed-for-the-occasion fighting bull, one with the odds severely stacked against him. And I mean severely – since the Las Ventas bullring opened in 1931 only one bull has ever been pardoned (seemingly because of a good performance) and left the ring alive, this oh-so unique event happening way back in June of 1982.

A final few random pictures from my time in Madrid. 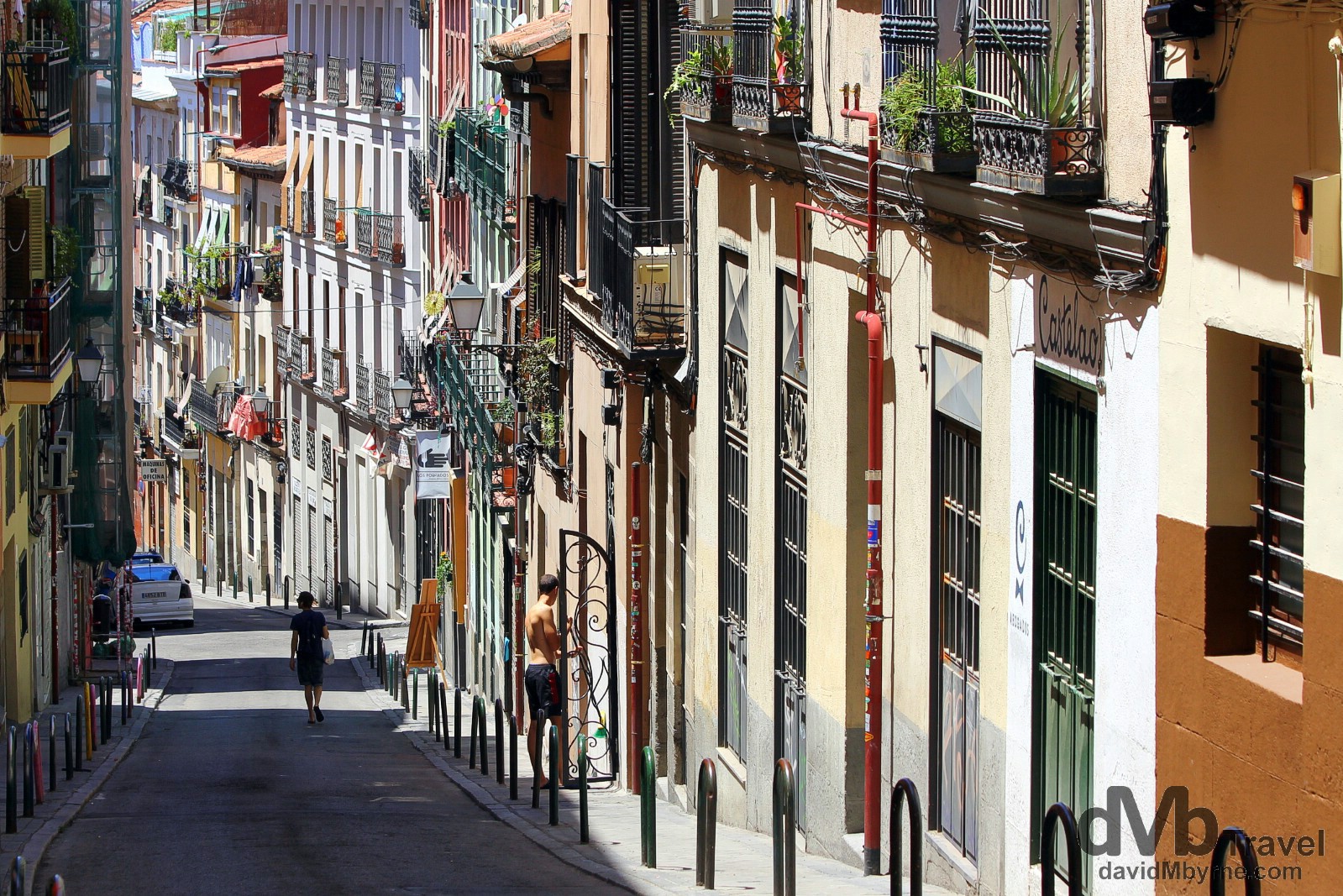 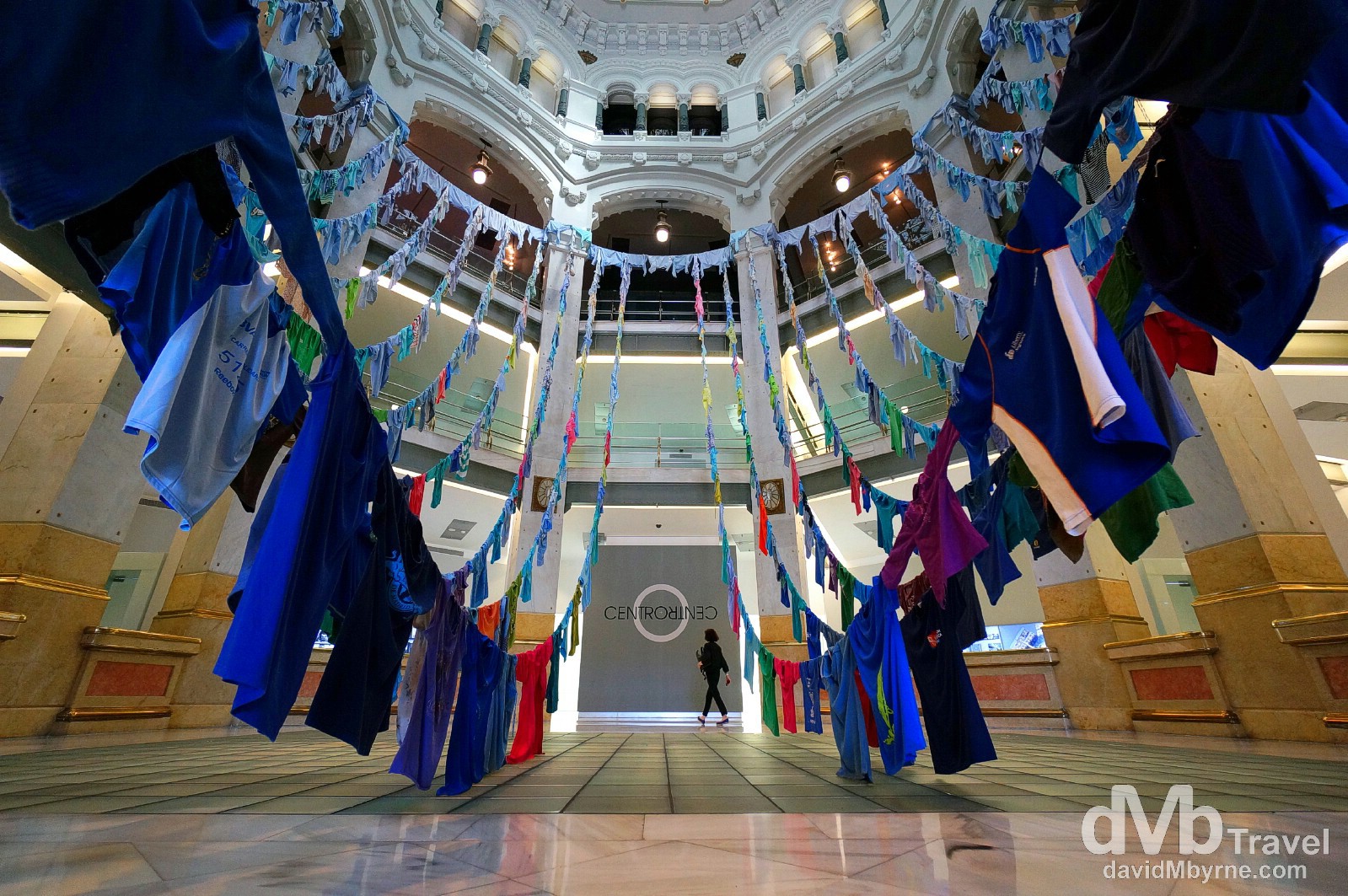 Palacio de Cibeles (Cibeles Palace), formerly The Palace of Communication, is one of the most impressive buildings in the city, one that has over the years, along with the fountain fronting it, become a symbolic monument of the city. Originally the headquarters of the postal service, it was home to the Postal and Telegraphic Museum until 2007 when the building became the Madrid City Hall, the lobby of which is presently displaying what can only be described as a clothesline-inspired work of art, one I really enjoyed photographing. Palacio de Cibeles, Madrid Spain. June 14, 2014. 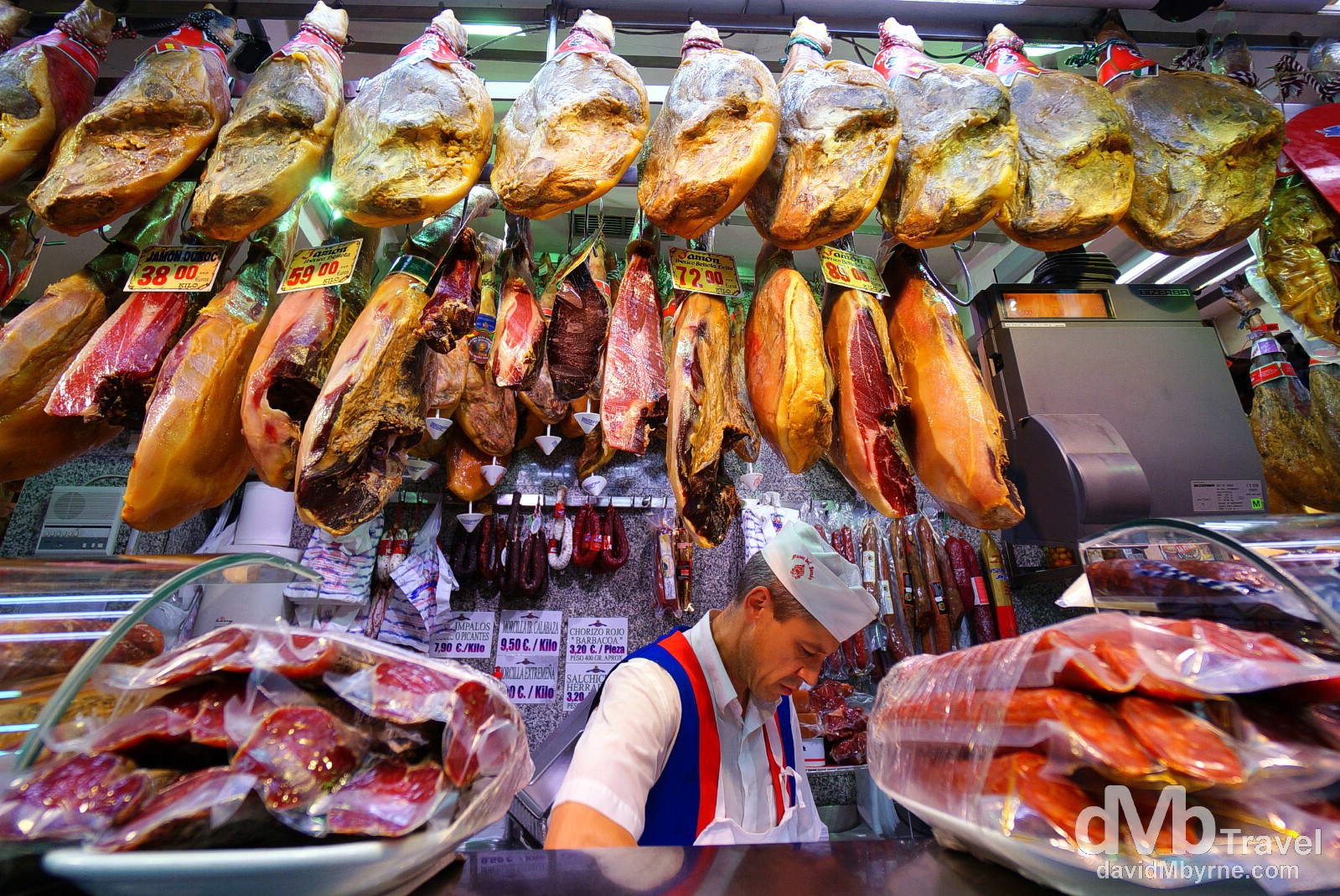 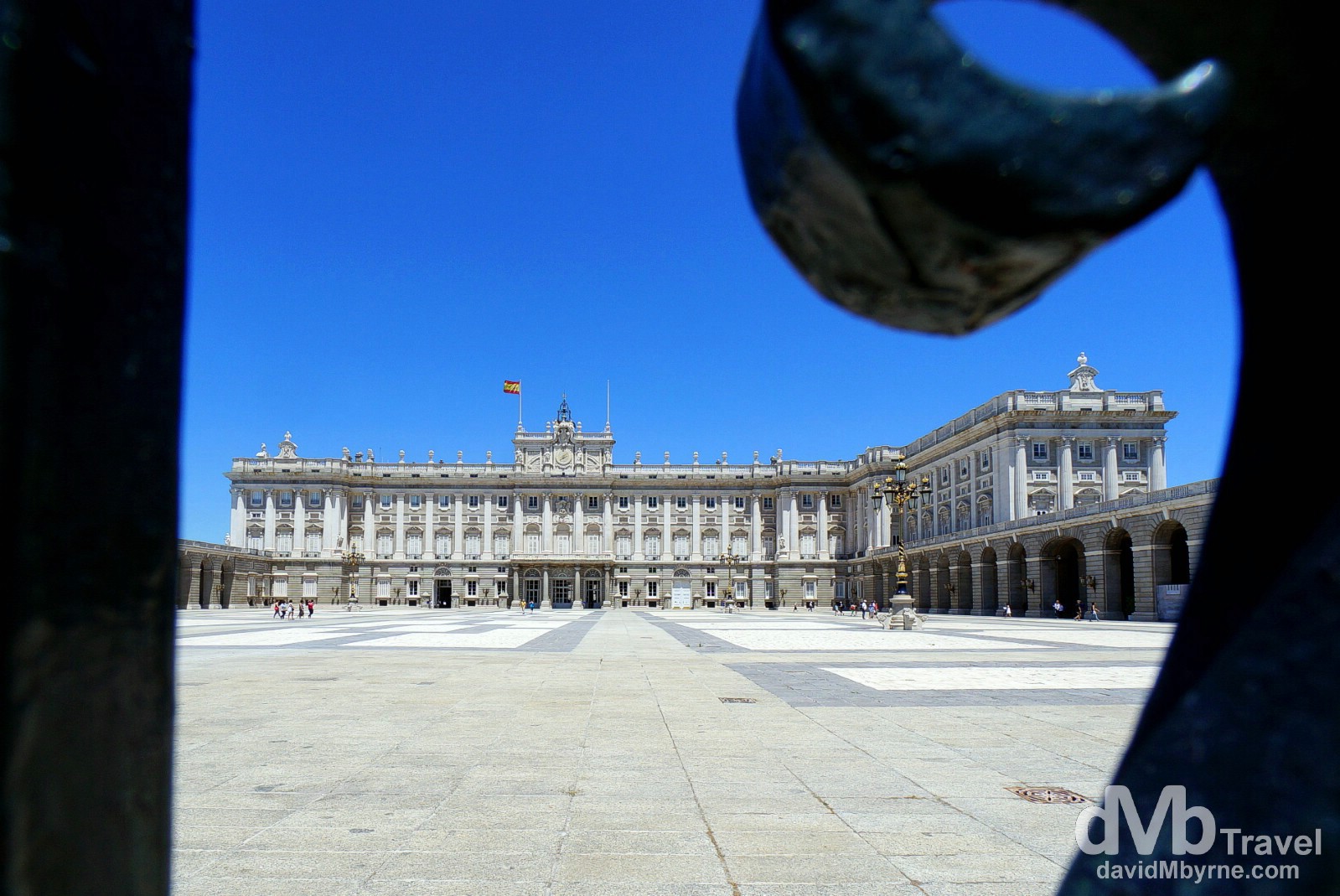 A section of the Palacio Real (Royal Palace) as seen through railings. A guided tour through sections of the Royal Palace, which is only occasionally used these days for royal ceremonies, is one of the city’s biggest to-dos but not one that was on my particular to-do list. Next time. Maybe. Madrid, Spain. June 15, 2014. 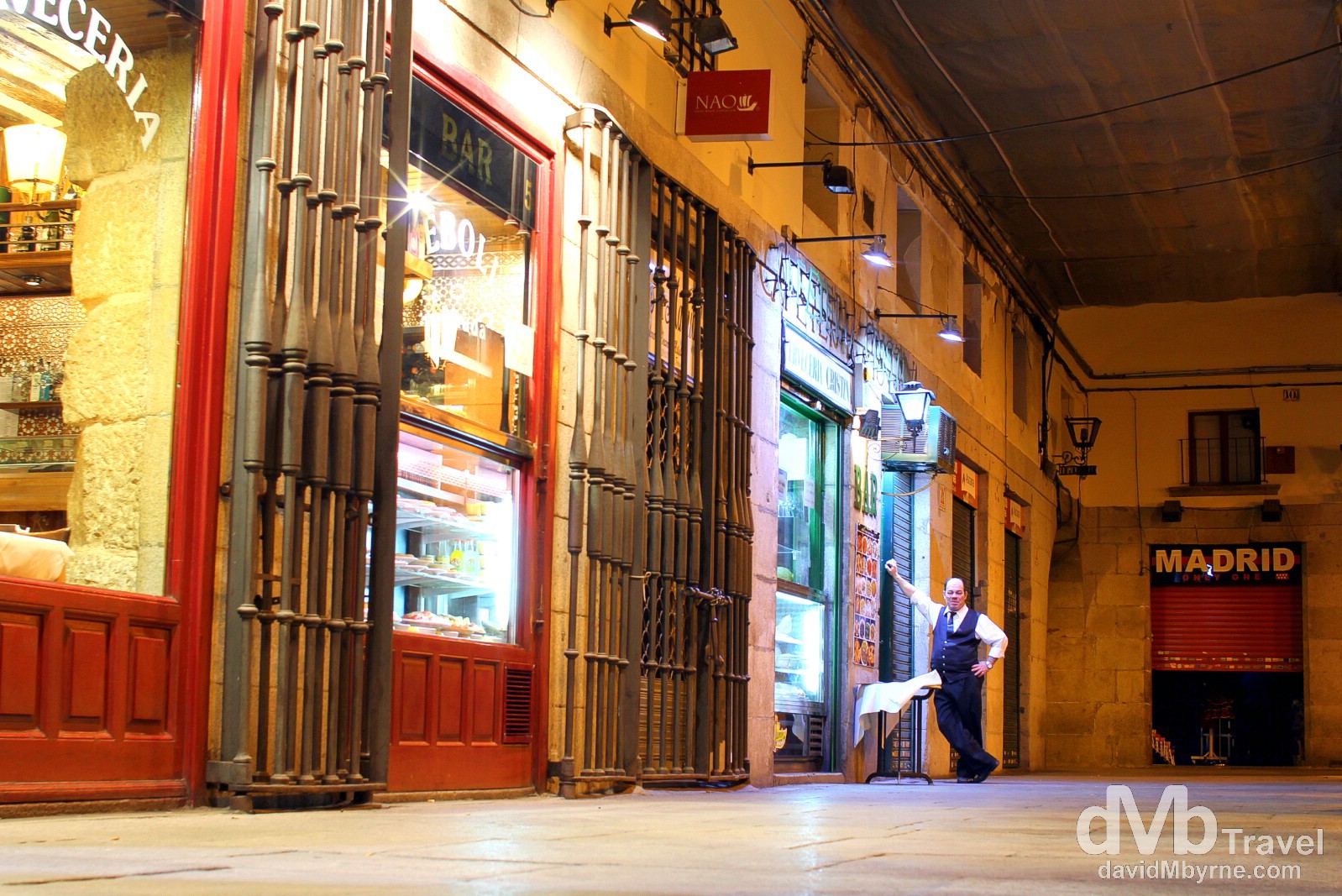 Approaching closing time on the edge of Plaza Mayor. I didn’t find Madrid very photogenic after dark. I went out on the streets a few times once the sun went down but was never really satisfied. I’d little else to complain about during my time in the city. Madrid, Spain. June 15, 2104.