I‘ve been taking it easy since arriving in Morocco late Sunday night (today is Thursday already). I spent 2 nights in Casablanca & tonight will be my third & final night in El Jadida, 2 hours down the Moroccan Atlantic coast from Casablanca.

Camels on the beach, about as busy as their masters who were, of course, sitting in a nearby cafe. El Jadida (

El Jadida
El Jadida, my first stop on my Moroccan travels outside of Casablanca, is a small fishing town about 2 hours south of Casablanca. There’s not a whole lot going on here which I guess is a large part of the town’s charm. The Portuguese, who sniffed around Morocco until they left in 1769, built a fort here and their town, a small walled settlement now known as Cite Portugaise, is a UNESCO-listed site having being grated World Heritage status in 2004. It – the Cite Portugaise – is another El Jadida charm, as is its expansive beach. I happily whiled away 3 nights here or will have done by the time I leave for Essaouira in the morning, yet another fishing village further down the Moroccan Atlantic coast. I caught up on some blogging, drank a lot of coffee, watched people playing soccer, watched people fishing, & ambled around the lanes of the Cite Portugaise. 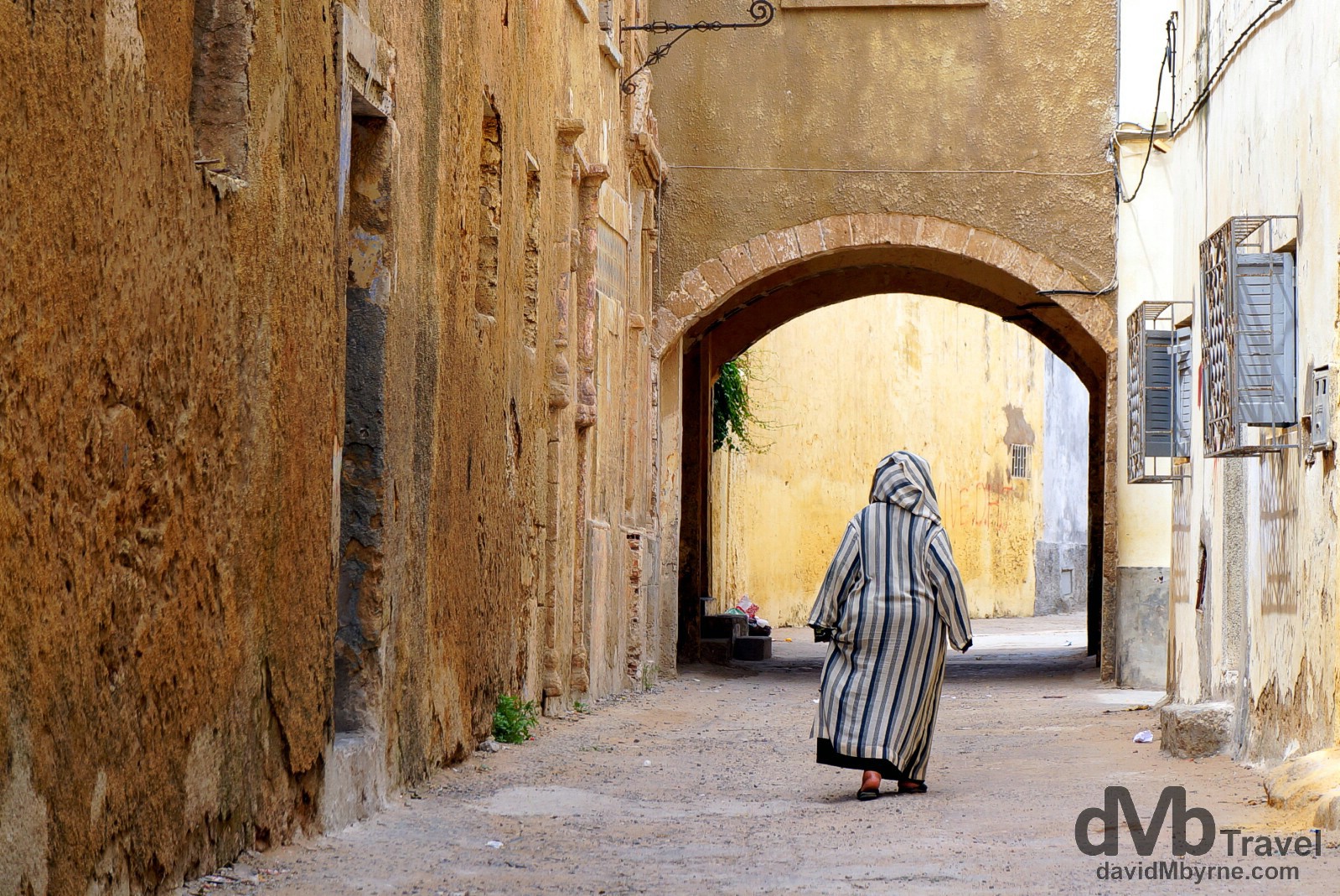 El Jadida’s UNESCO listed Cite Portugaise is a compact maze of twisting streets surrounded by ochre ramparts. There’s not a lot going on in here – there are a few restaurants and tourist tat shops – so just wandering the streets of the UNESCO-listed region is the order of the day, any day. El Jadida, Morocco. May 1st, 2014

The Portuguese fortification of Mazagan, now part of the city of El Jadida, 90-km southwest of Casablanca, was built as a fortified colony on the Atlantic coast in the early 16th century. It was taken over by the Moroccans in 1769. The fortification with its bastions and ramparts is an early example of Renaissance military design. The surviving Portuguese buildings include the cistern and the Church of the Assumption, built in the Manueline style of late Gothic architecture. The Portuguese City of Mazagan – one of the early settlements of the Portuguese explorers in West Africa on the route to India – is an outstanding example of the interchange of influences between European and Moroccan cultures, well reflected in architecture, technology, and town planning.

This was the pictorial highlight of El Jadida’s Cite Portugaise for me, the Citerne Portugaise, a vast, vaulted cistern lit by a single shaft of light. Used originally to collect emm, water, it’s an eerie place and doubtless it wouldn’t even warrant a picture were it not for the ever-present thin film of water on the floor reflecting a mirror image of the vaulted ceiling and columns. I took many a picture in here over two visits but only on today’s visit did the beam of light from above actually look like a beam of light. And the two subjects to the left added a nice sense of scale. Citerne Portugaise, El Jadida, Morocco. May 1st, 2014

Loving the decor here in #morocco The hallway outside my room in Hotel Royal #eljadida @ El Jadida http://t.co/efzefEWvpJ

A Few Early Moroccan Observations
• Everyone speaks French & all signage, menus & the like are in French. The French were here until 1956 when Morocco gained independence. I’m getting by.

• That said, the countryside is very green. At least what I’ve seen of it between Casablanca & El Jadida. I expected it to be more barren, more desolate.

• Olives are served with every meal. I hate olives.

• Much like in India, where everywhere you look people are playing cricket, here in Morocco everyone is playing soccer – on the beach, in the streets. Anywhere they can really. And at all hours of the day. Doesn’t anyone go to school? Or have a job? 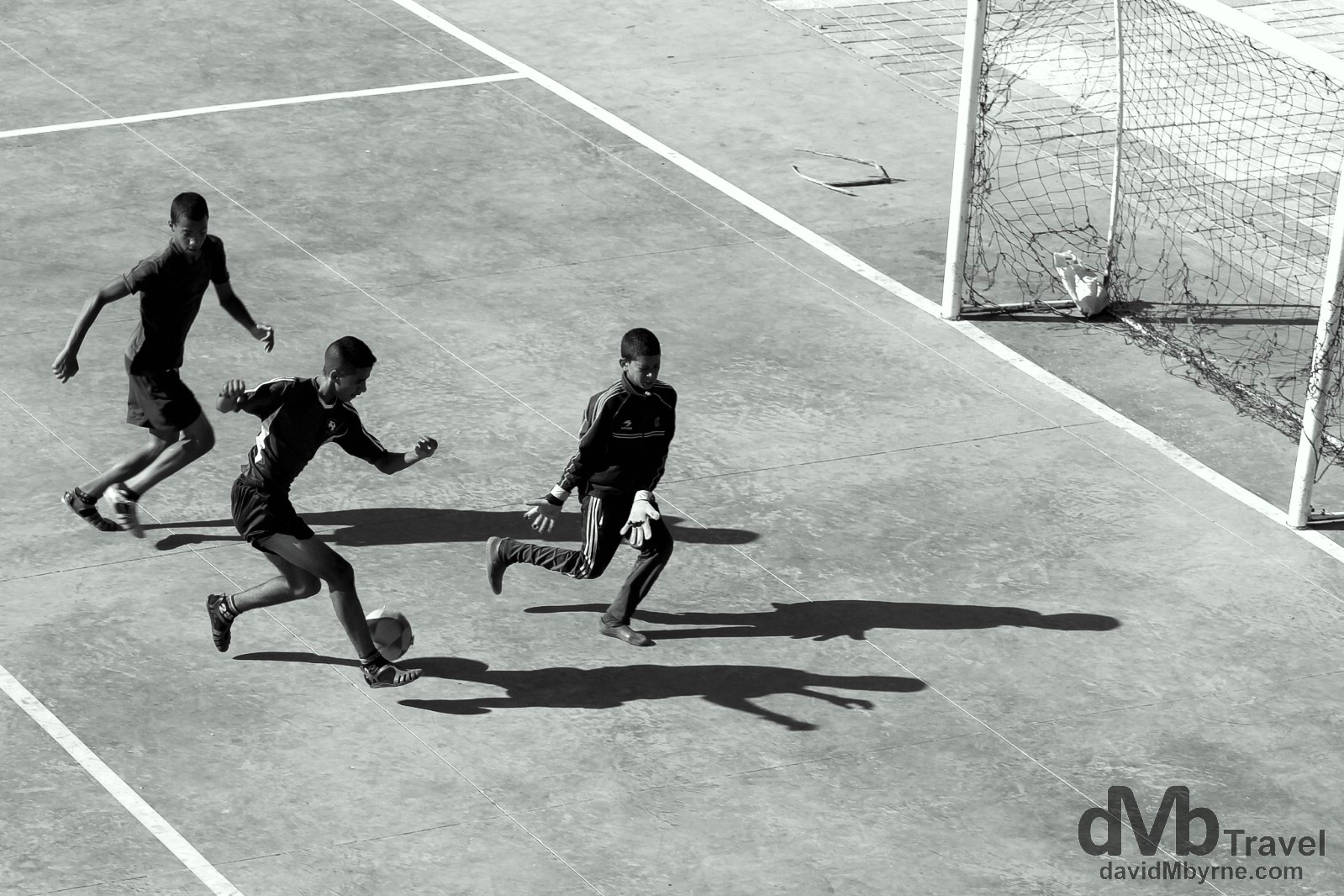 Playing soccer as seen from the ramparts of the Cite Portugaise, El Jadida, Morocco. April 29th, 2014 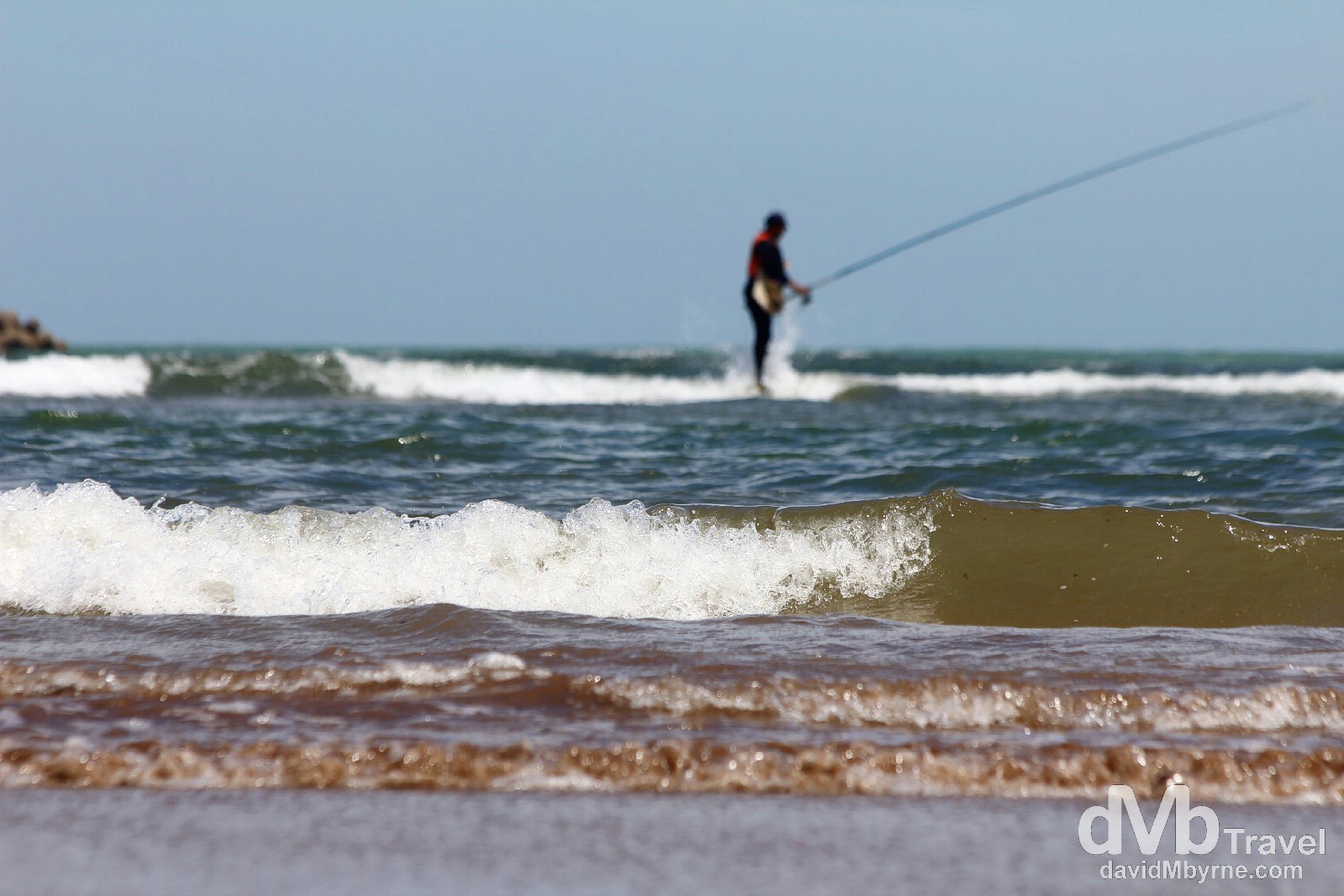 Waves & fishing offshore of the beach in El Jadida. This guy was a good ways out. I’m not too sure what he was standing on but he sure as hell wasn’t walking on water. El Jadida, Morocco. May 1st, 2014