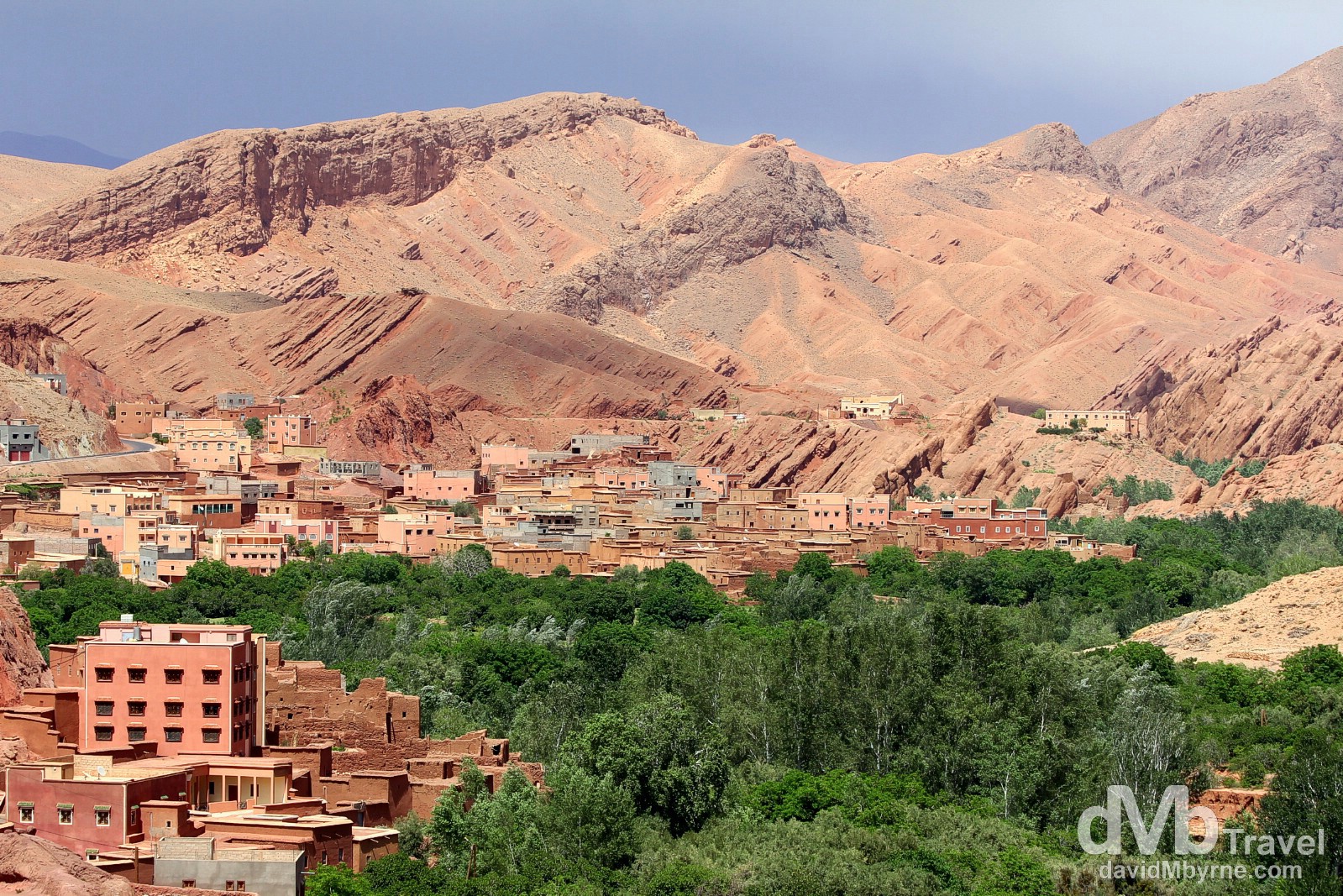 I‘ve been off the radar for a few days. It’s not like I was off the beaten track & out in the middle of nowhere. I wasn’t, it just felt that way. Since I left the hammada landscape of Ouarzazate a few days ago, I have spent 2 nights in two different Moroccan gorges (random, I know). Both places I stayed at – a pretty big guesthouse in the first gorge & a hotel in the second – I had to myself as there were positively no other tourists around. Only one of the places had hot water, neither place had internet, & one place was granted a total of 3 hours of electricity a day (from 8-11 p.m.). As I said, I wasn’t really that far off the beaten path, but it sure felt like it. 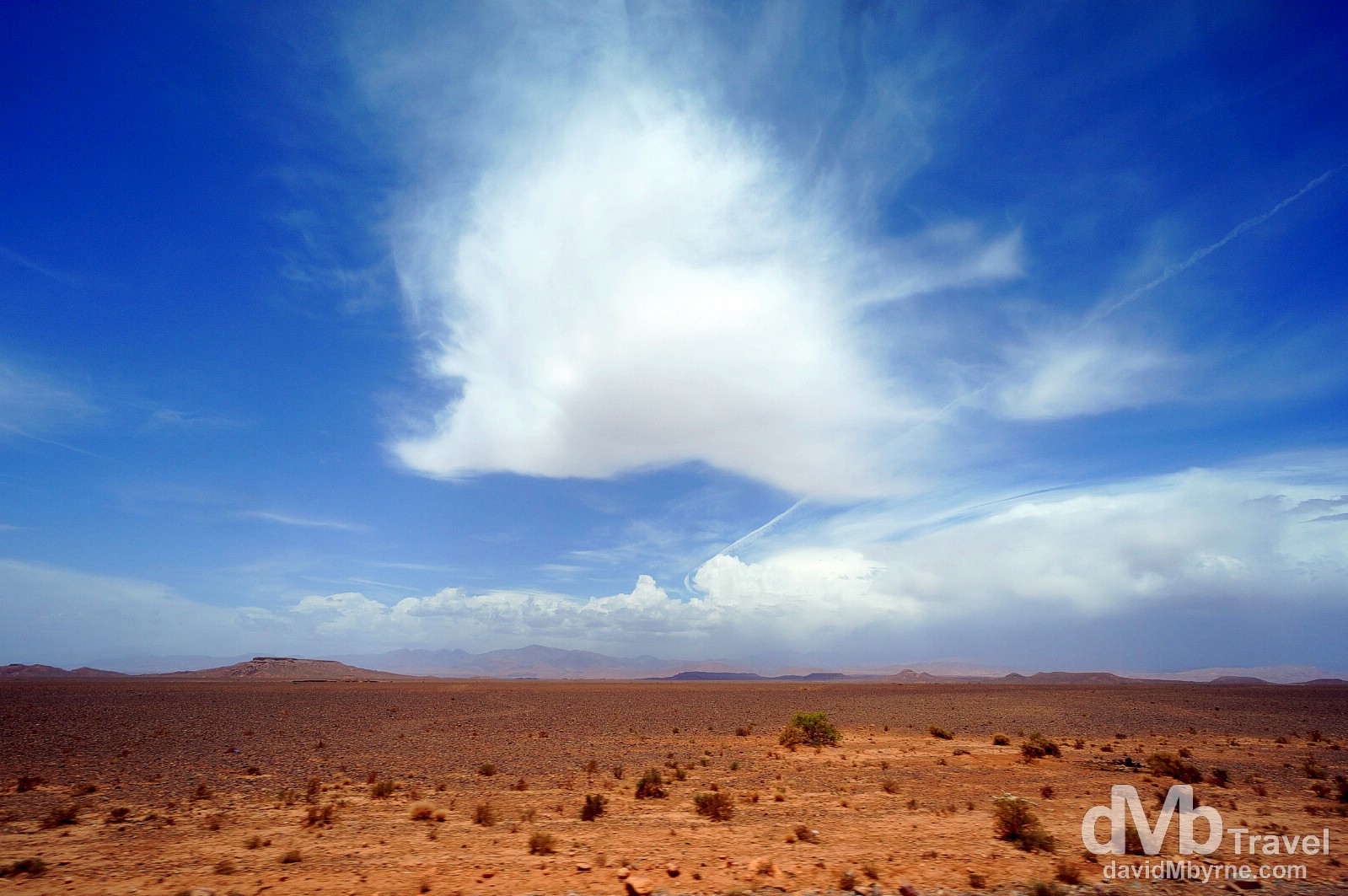 A section of Dades Gorge north of Boumalne du Dades. The gorge, which is very red, is said to boast ‘outlandish rock formations’ as it meanders north from the main west-to-east N10 road towards the Atlas Mountains. What it doesn’t boast is easy access – my guesthouse didn’t even offer bike hire. I didn’t plan on spending only one night in the gorge, or of taking just one picture of its landscape (this one, taken from the balcony of my guesthouse), but that’s how things turned out. Dades Gorge ( 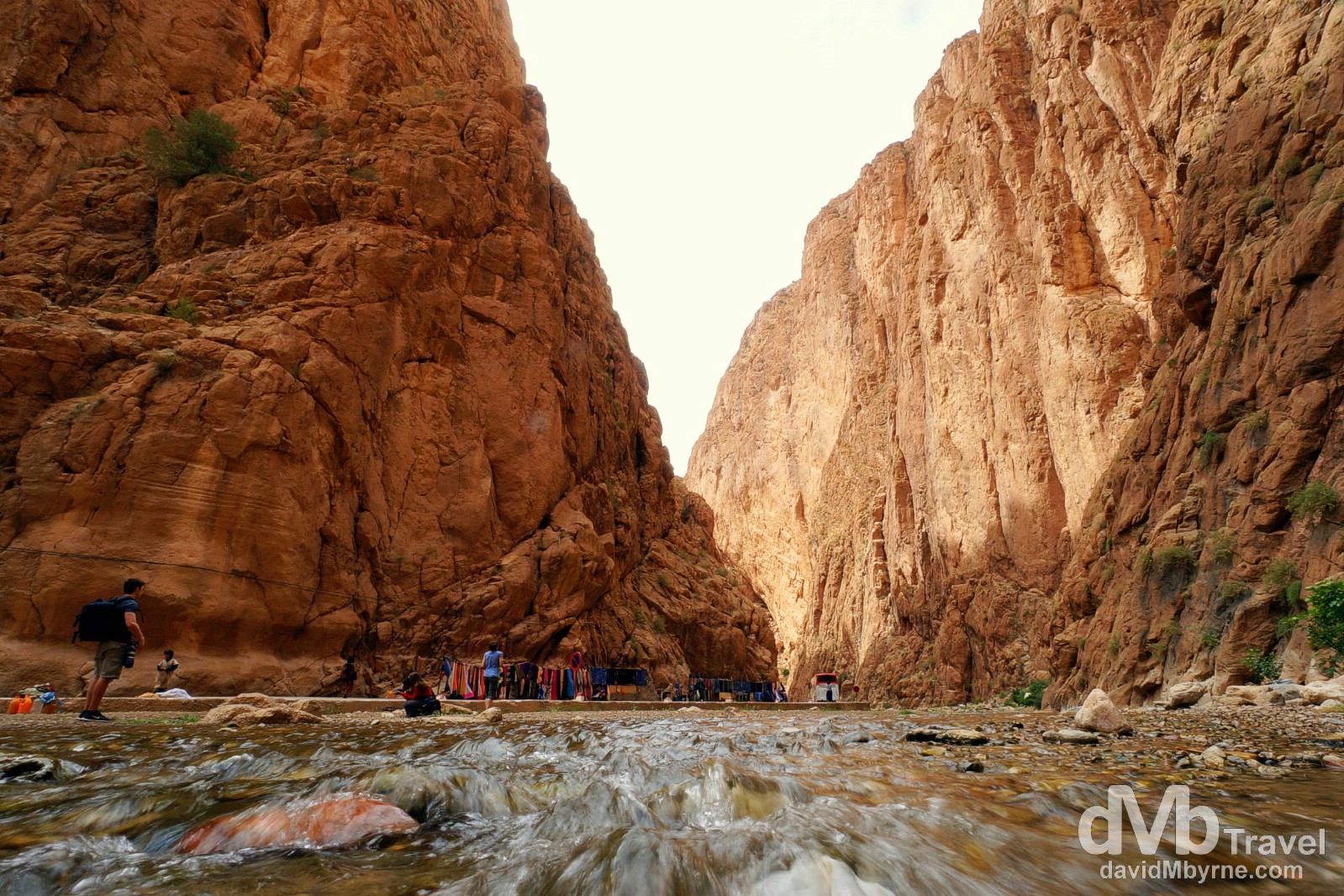 Todra Gorge, another diversion off the N10 east of Dades Gorge, was more like a true gorge, a trench through the High Atlas which here at its deepest point has 300-metre high towering rock walls. It also boasts a river (more like a stream really) running down one side, with a narrow road on the other side lined with souvenir stalls to cater to the bus loads of tourists that make a token stop off in the gorge en route somewhere else (because there was certainly no one staying in the vicinity of the gorge with me). One such bus arrived (& left) while I was photographing the gorge, depositing a group of very well endowed (with camera gear) fellow tourists all of whom spent a few minutes with stupidly expensive camera gear getting the same shot from the same position (and a few of them looked at me & my little Sony mirrorless camera in the middle of the gorge low in the water getting this shot with a somewhat bemused look). Todra Gorge (

Todra wasn’t all about the gorge. A 2-hour hike in the surrounding hills was something I was planning on doing on day 2 in Todra but I found myself high in the hills on day 1 instead, meaning Todra was also only going to get me for 1 night, just like Dades Gorge before it. 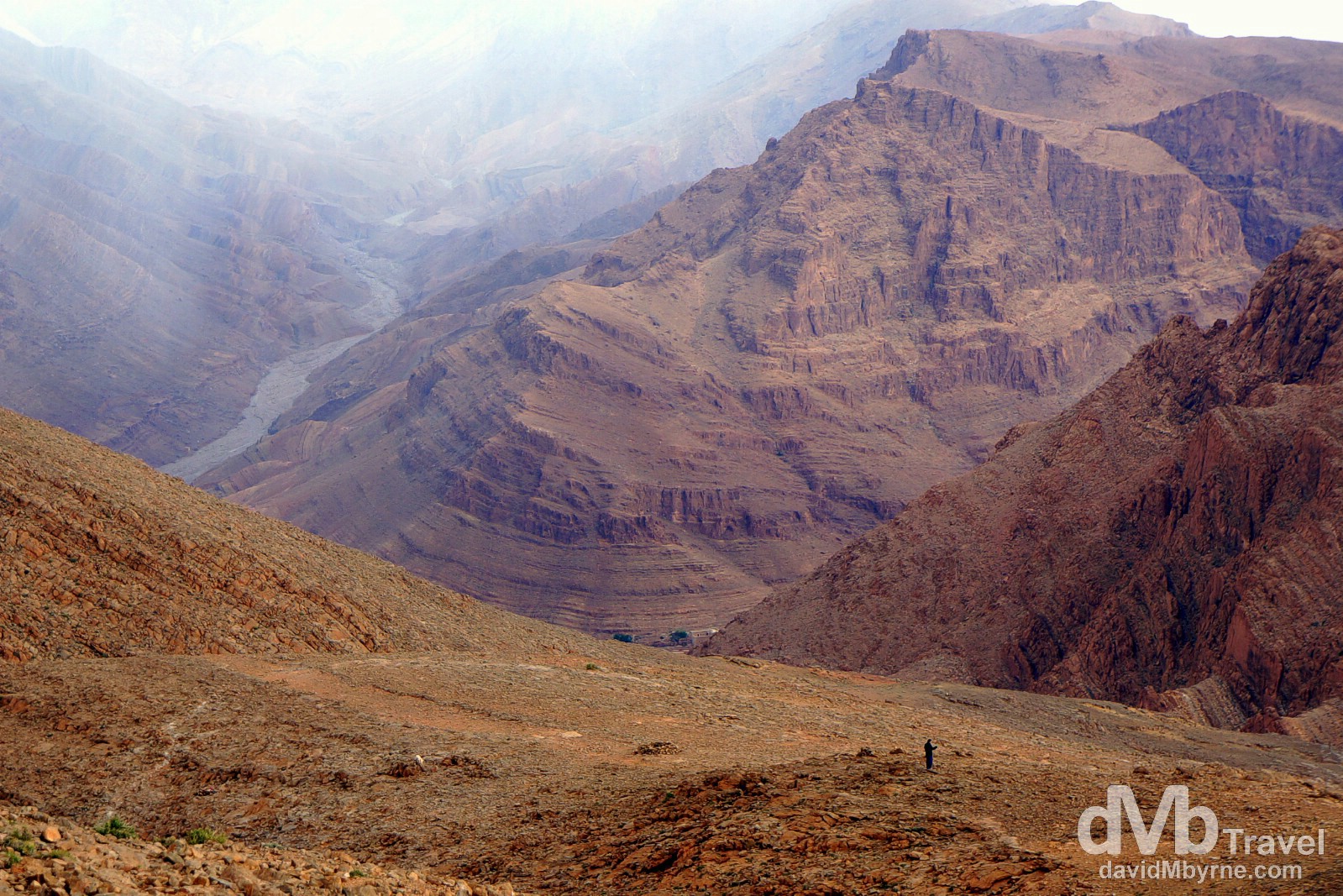 This picture is taken from near the highest point of the hills around Todra Gorge. It took me about an hour to walk here from the gorge itself (which is over the lip of one of the hills in the distance). The views of the surrounding Martian-esque landscape were amazing, a real unexpected treat & the highlight, if you’ll pardon the pun, of the last few days in central Morocco. A figure who appeared out of nowhere down below me as I was beginning my descent back to the guesthouse added a nice sense of scale to this image. In the barren hills above Todra Gorge, Morocco. May 16th, 2014 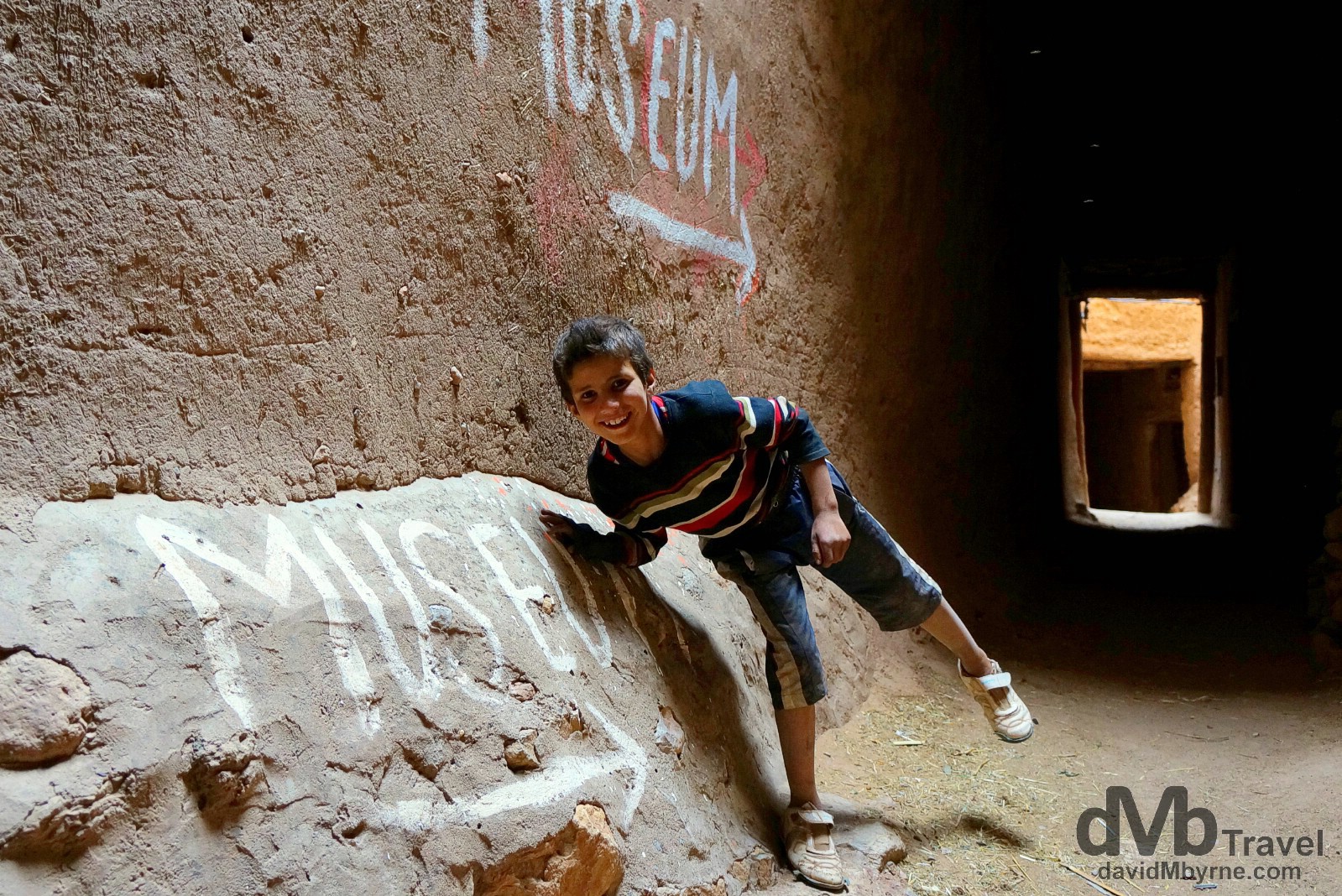 I made my way down from the hills & found my way to a village, one with a very dilapidated kasbah. I couldn’t believe people lived here but live here they did. One of the residents was Bryan (say hello to Bryan, y’all) who saw me coming from afar, met me at the entrance to the kasbah and led me through its dark, labyrinth lanes to the safety of the main road from where I walked back to my 3-hours-a-day-of-electricity hotel. This little guy was awesome and when I was photographing this section of one of the kasbah lanes he asked to jump in the picture – we communicated pretty well together in French, needless to say his Gallic tongue far more advanced than mine. Upon saying goodbye I gave him whatever change I had in my pocket – 30 dirhams or thereabouts (€3). He was over the moon & making his day made mine. In the dark & crumbling lanes of the kasbah in the village of Tizgui, Todra Gorge, Morocco. May 16th, 2014