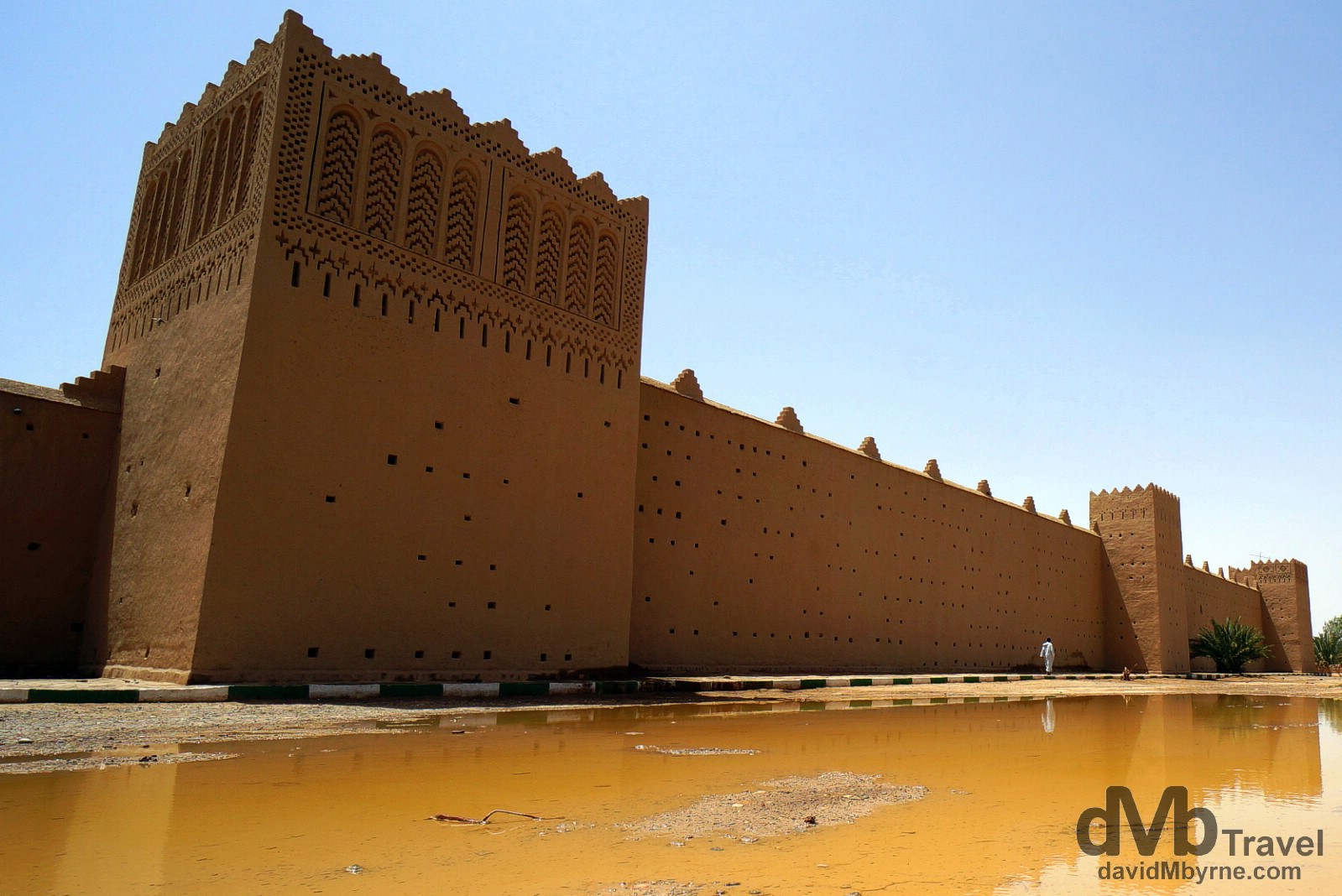 I‘m in Midelt, a town in central Morocco in the high plains between the Middle Atlas and High Atlas mountain ranges. There’s not a whole lot going on here – I’m stopping off for the night en route to Meknes, my next stop in Morocco – and I’m taking it easy after a long day. I left Merzouga & the Moroccan Sahara dunes of Erg Chebbi earlier today, dropped my hire car off in Er Rachidia and hopped on the three hour bus here to Midelt. But before I dispensed of the hire car I did a tour of Morocco’s so-called Circuit Touristique. It was awesome.

A distinctive pointed horseshoe arch at the entrance to #Rissani #morocco http://t.co/380YMDcC5i

Rissani, about 25 kilometres from the Moroccan Erg Chebbi Saharan sand dunes, is a dusty town on the edge of the desert that doesn’t have a lot going for it. But that wasn’t always the case. From the 8th to 14th centuries present-day Rissani was the location of somewhere called Sijilmassa, the first independent kingdom of the Moroccan south. Sijilmassa was also the first capital of the Tafilalt, this region of Morocco, & the most important oasis of the Moroccan Sahara, not to mention the last stop on the great desert caravan routes. As if that wasn’t history enough, it was from here in the 17th century that the present-day ruling Alaouite dynasty launched its ultimately successful bid for power. So all in all this is quite an historic region of the country. Today there are a lot of ksour (southern villages or tribal strongholds) in the area, some of which are remnants of the glorious past, & I spent a bit of time en route back to Er Rachidia earlier today driving the regions so-called Circuit Touristique, a 21-kilometre loop to & from Rissani that passes through numerous ksour & palmeries. And I took a few picture too.

The walls of the Ksar Oualad Abdelhalim outside the village of Rissani. A few people still live in the ksour surrounding Rissani but they are no longer the bustling communities they once were. The Ksar Oualad Abdelhalim is one of the few really impressive imperial buildings completed in the 20th century. It was built around 1900 by the then Sultan for his brother who he appointed governor of the southern region. Inside these impressive walls you’ll find a small city of crumbling lane ways & walled compounds, one of which houses the ruined palace that was once billed as the ‘Alhambra of the Tafilalt’. According to one guidebook it – the dilapidated palace – is a great place for photographers. I guess it is but I much preferred the exterior walls of the ksar to its dusty, crumbling innards. Ksar Oualad Abdelhalim, Rissani ( 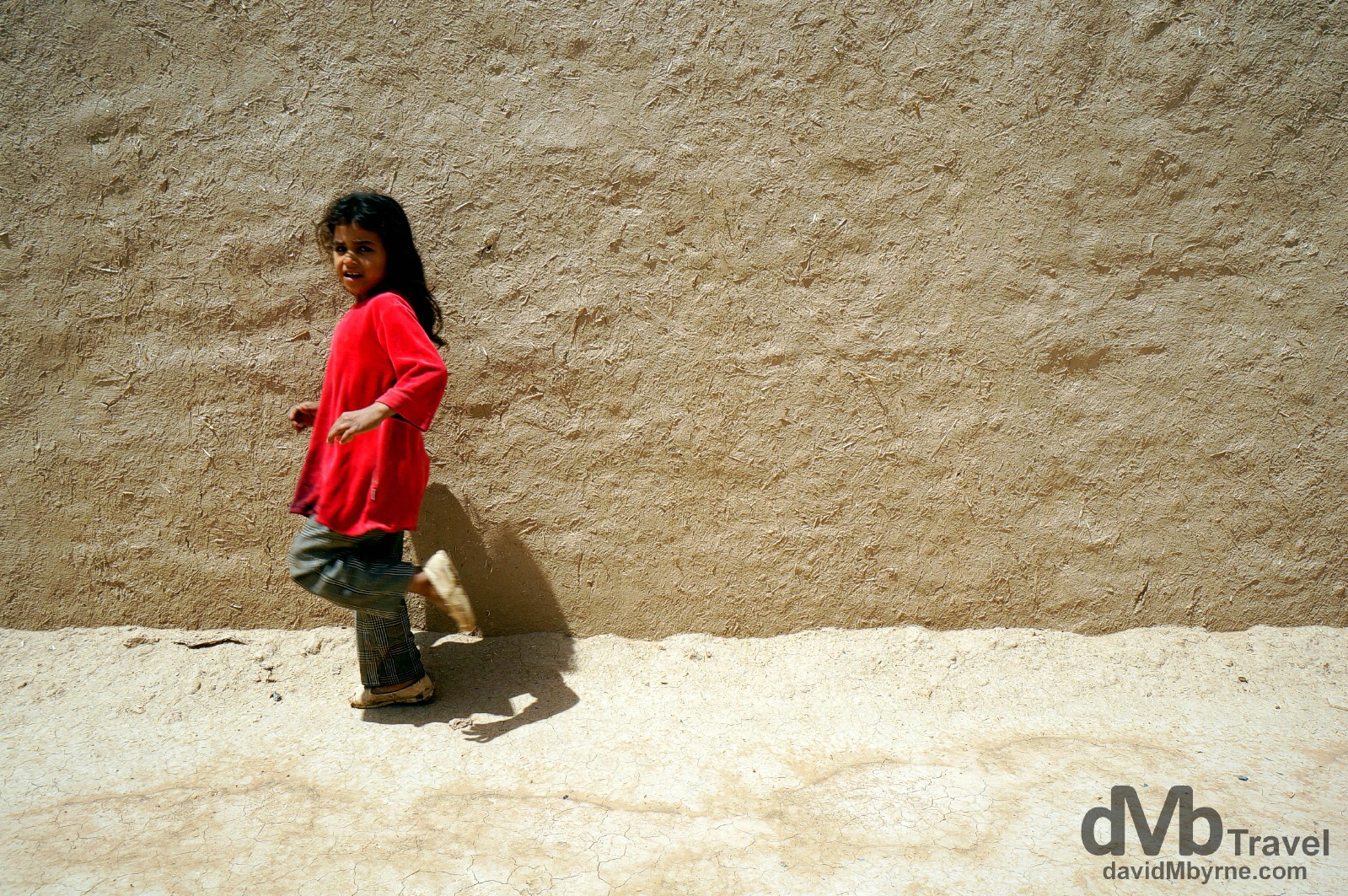 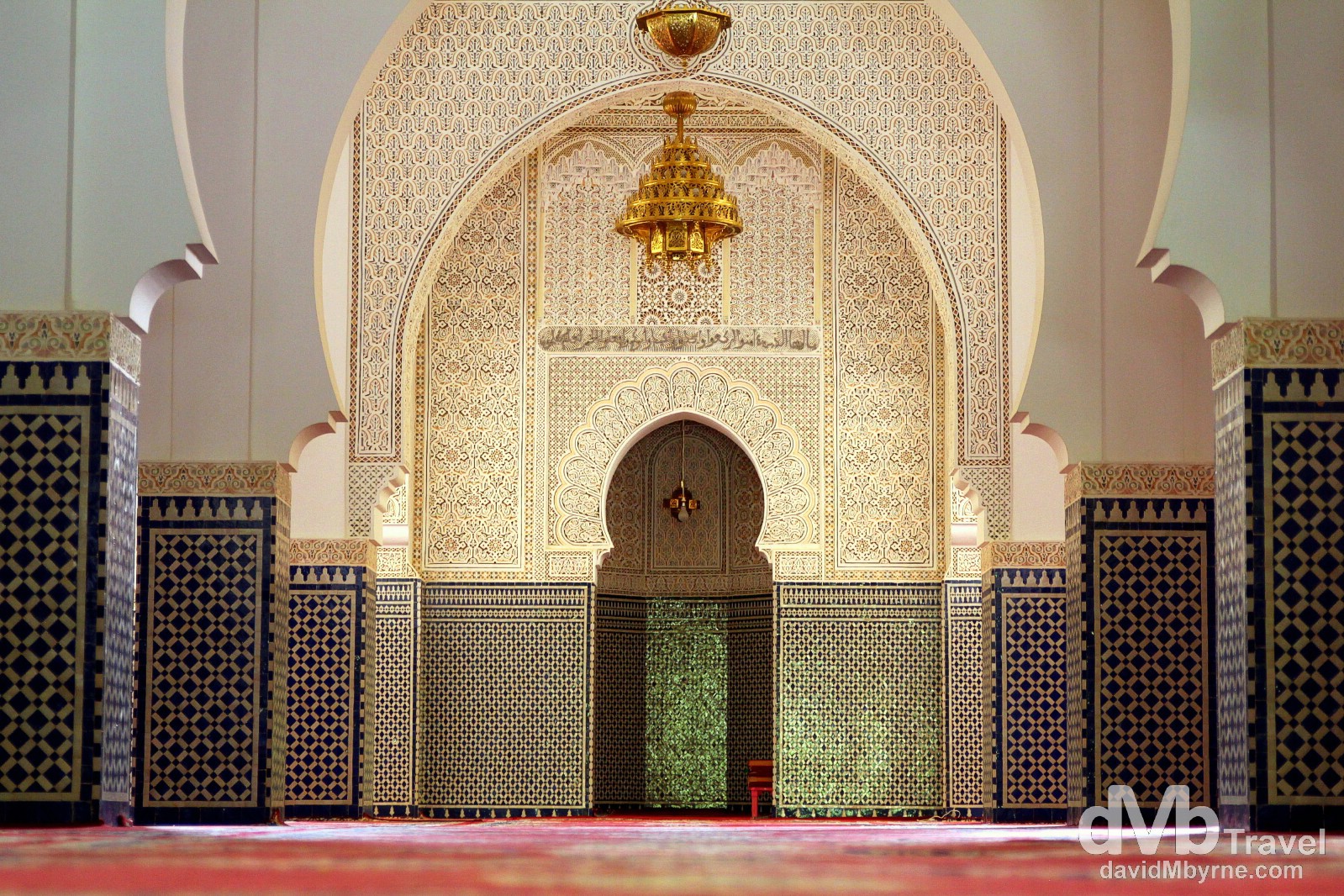 Inside the Zaouai of Moulay Ali Shereef, the original Alaouite stronghold and mausoleum of the founder of the dynasty that still rules Morocco today (a zaouai is a mosque built around a tomb of a marabout, or Islamic saint/holy man). I was in here – inside a Moroccan mosque – so needless to say the shrine is open to non-Muslims meaning that this is the only mosque I’ll get to enter during my travels in the country- remember, Moroccan mosques, not including the 120-dirhams-to-enter (€10) Hassin II mosque in Casablanca, are off-limits to non-muslims. I like this picture, not so much for the oh-so Moroccan zellij (a tile mosaic arranged in a decorative star pattern) but for the repetition of the very distinctive pointed horseshoe arches seen here. It’s a quintessential Moroccan sight, one of many architectural styles brought to Morocco from the Middle East by the Arabs. Zaouai of Moulay Ali Shereef outside the village of Rissani, Morocco. May 22nd, 2014

Breaking The Journey
As already mentioned, I’m holed up in a town called Midelt (

) for the night, mainly because I didn’t want to sit on a Moroccan bus for 7 hours today, day 26 in the country, deciding instead to subject myself to 3 hours today followed by 4 hours tomorrow. There’s not much here in Midelt, save for a lot of carpet shops, so that’s all I’ll say about the place – although the café I was in earlier this evening did, at 6 dirhams (€0.53), have the cheapest café au lait I’ve yet had in Morocco, something that does warrant a mention. Tomorrow I’ll continue north to Meknes, one of Morocco’s 4 imperial capitals & the second I’ll have visited after Marrakesh. It’ll be cities for the next few days (after Meknes it’ll be the turn of Fes, the Arab world’s most ancient & historic city), and mostly cities for the rest of my time in Morocco.