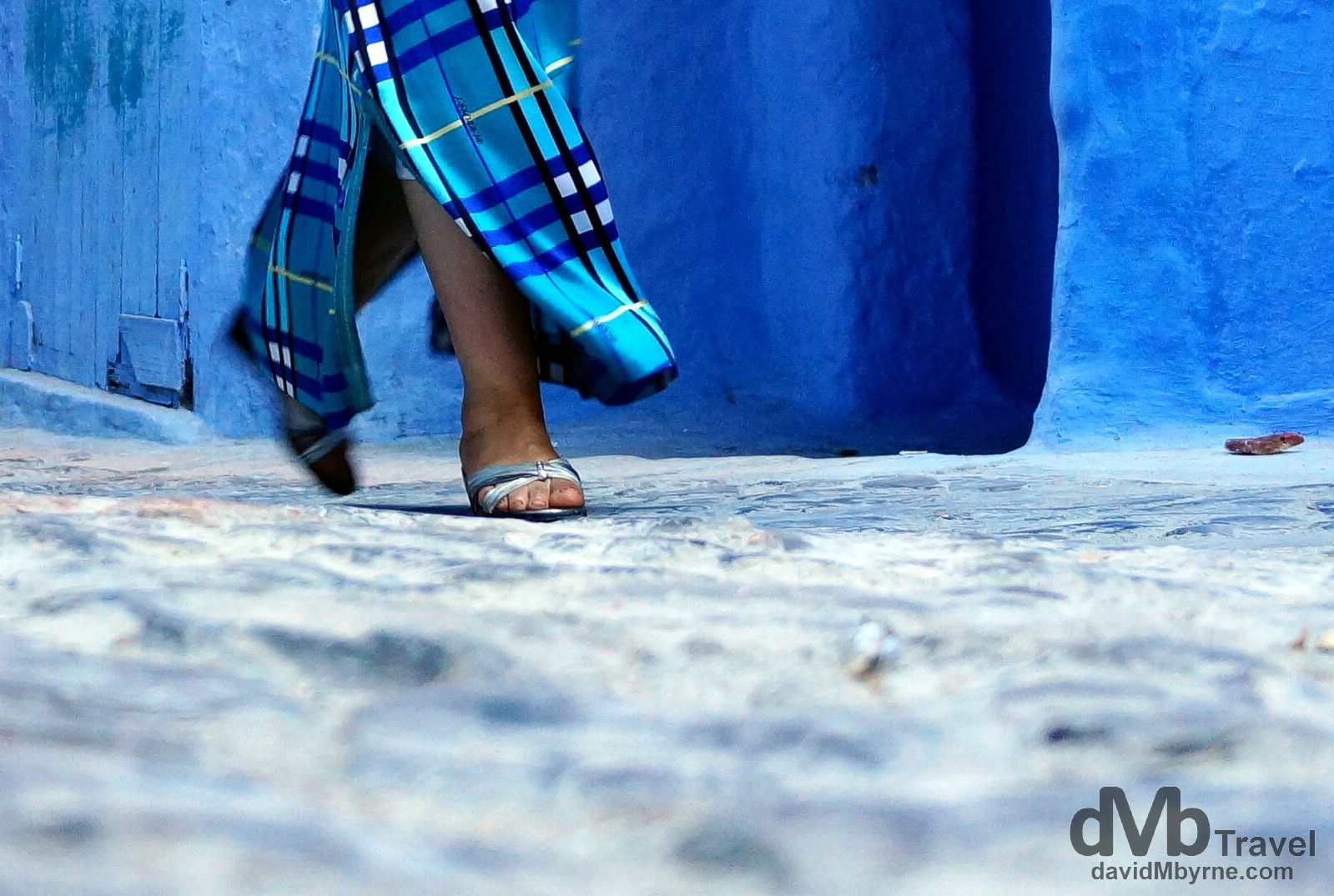 D o any pre-arrival research on Morocco – where to go, what to see etc. – and you’re eventually going to read about & see pictures from blue & white Chefchaouen where I’ve just spent the last three nights. There’s not a whole lot to this place – a large town surrounded by mountains (hills really) that’s home to some 45,000 people – but it’s the sort of location that leaves an impression regardless. It might even leave you feeling blue. 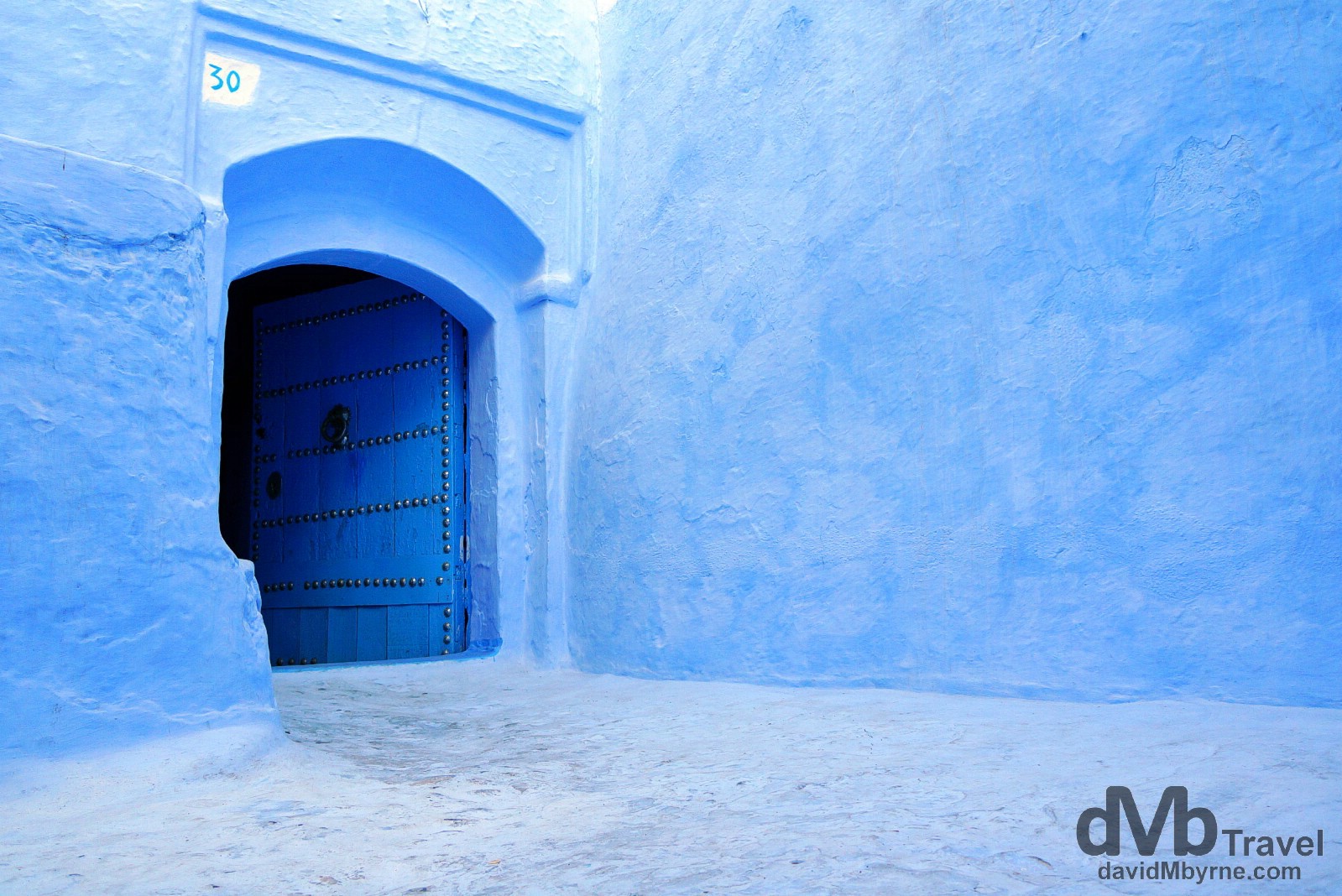 Feeling blue in the lanes of the medina in Chefchaouen (

On the N13 en route from #fes to #Chefchaouen #morocco #travel #dmbtravel pic.twitter.com/PIxI7G5DSm

Chefchaouen
The town of Chefchaouen was founded in 1471 as a base for Berber tribes to attack the colonial Portuguese who were in Morocco at the time. The town was always anti-establishment and over the years it grew increasingly aloof, anti-European & xenophobic – Christians were forbidden to enter the town on pain of death mainly because the town was founded in a region sacred to Muslims. As a result, Chefchaouen became something of an isolated backwater and it stayed that way right up until the arrival of the Spanish in 1920 – while the French had control of much of Morocco up until Moroccan independence in 1956, the Spanish held sway here in the north in a sort of European Colonial power-share. The Spanish are long gone now, & the Moroccans have their pretty little town back, but things are a tad different here these days – the locals are a little more open, a little more welcoming (& a good thing too given the amount of tourists this place attracts.) 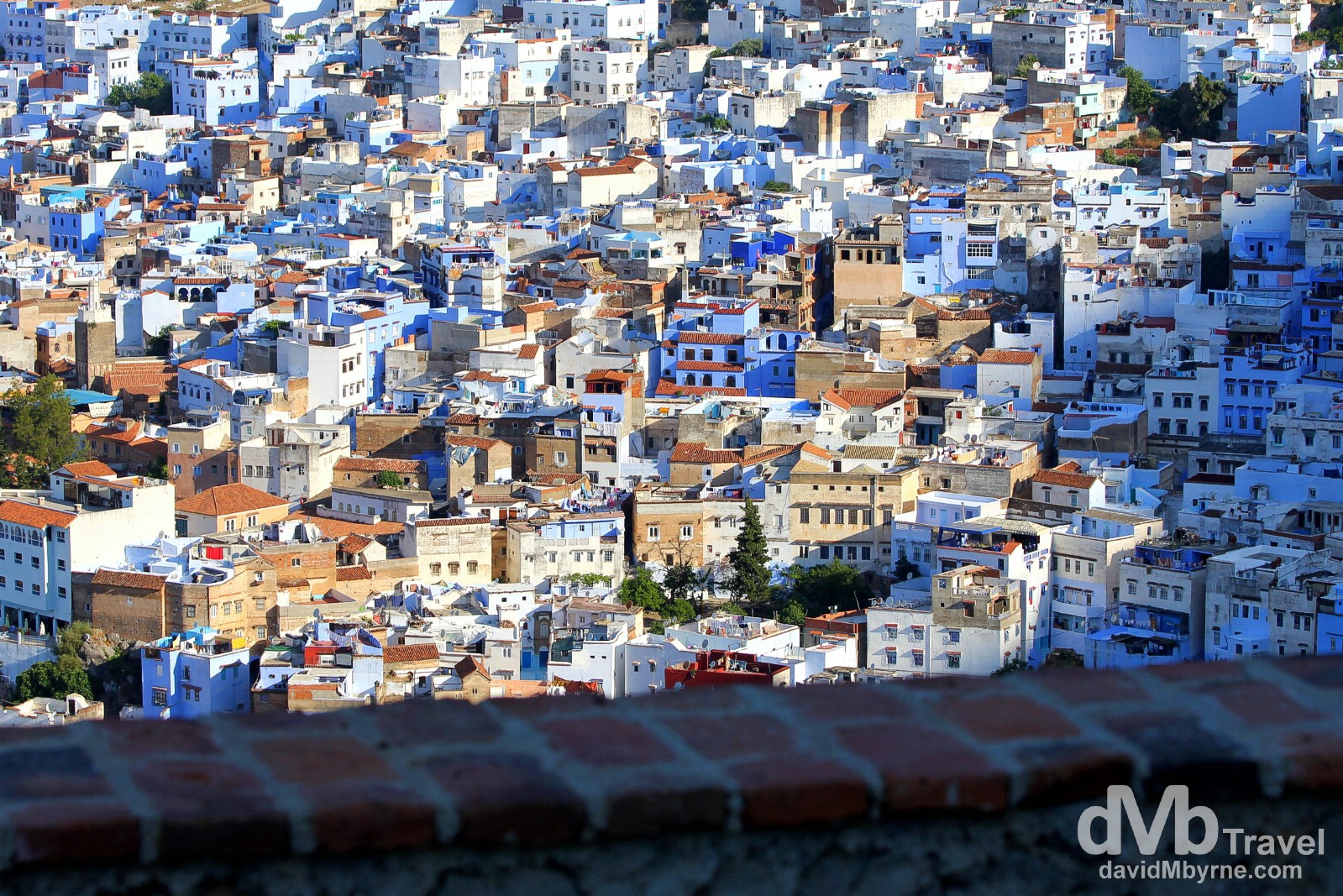 The rising sun creeps over a portion of the Old Town as seen from the hills overlooking the town of Chefchaouen, Morocco. June 1st, 2014

Moroccan Tourist Central
Like pretty much every other larger Moroccan town or city, Chefchaouen has both an original Moroccan Old Town & a colonial-built New Town/City area, both of which are (very) hilly. The New City, outside the brown walls of the compact Old Town medina, has a few pretty parks & a market area. It’s nice. Inside the Old Town medina itself there is a small kasbah & a few pleasant, peaceful squares lined with restaurants & cafes that push the town’s laid-back vibe to the limit. It’s still a very religious place, the scene of many moussems (religious pilgrimage festivals), but there are more than a few tourists around, all catered for by large numbers of cafes, guesthouses & souvenir shops. In fact, & some 6 weeks into my Moroccan travels, Chefchaouen is even more touristy than Essaouira on the Atlantic Coast which up to now had been tourist central in Morocco for me. 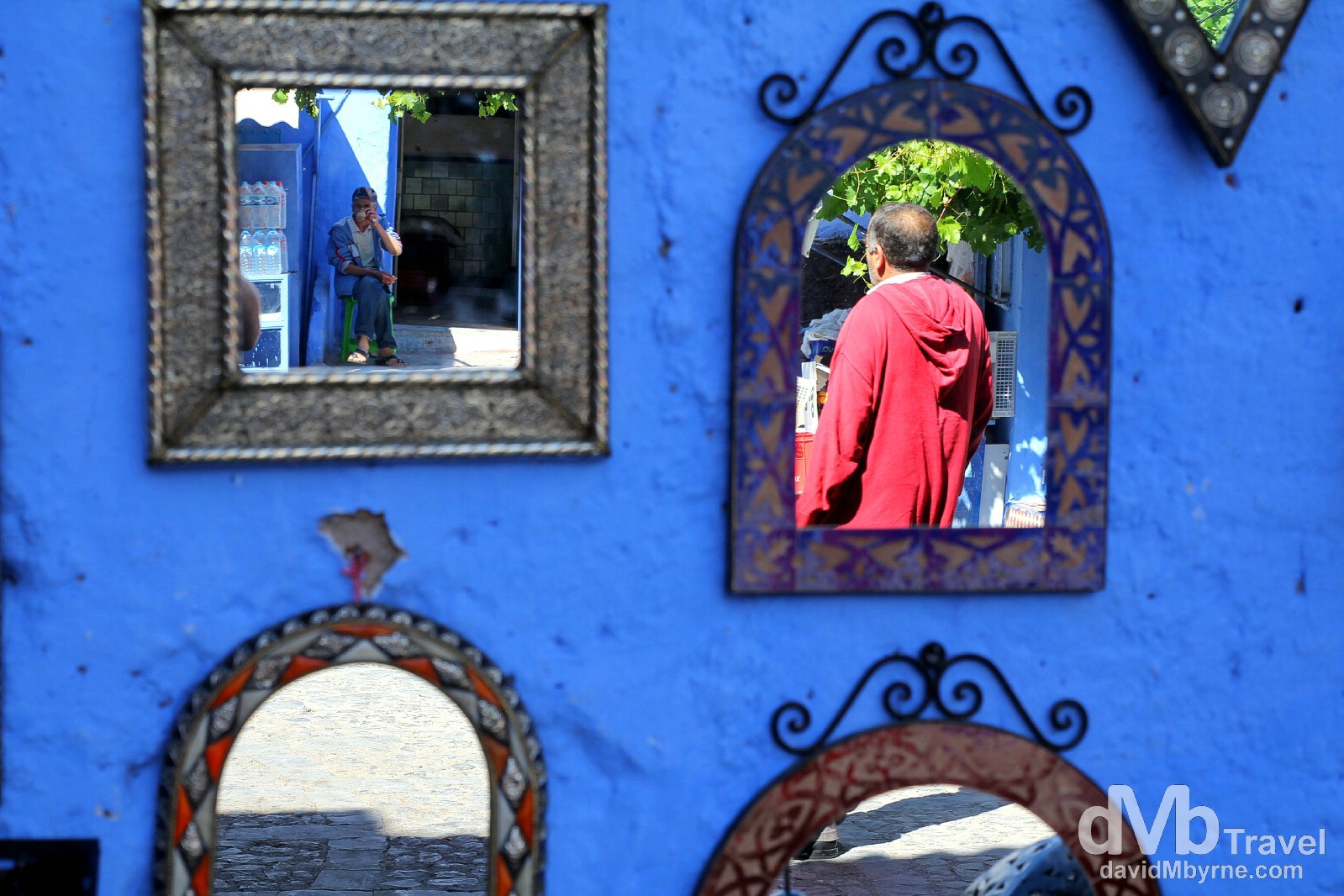 Reflections in mirrors for sale in the lanes of the medina in Chefchaouen, Morocco. June 1st, 2014

Chefchaouen’s (Very Blue) Old Town Medina
All the aforementioned tourists, me included, no doubt appreciate Chefchaouen’s array of pretty parks, all those peaceful little café-culture squares, the town’s quirky guesthouses, & its tiny Kasbah, but it goes without saying that it is the mind-bogglingly photogenic blue-washed walls of the Old Town’s medina that easily steals the Chefchaouen show. It’s not even close. 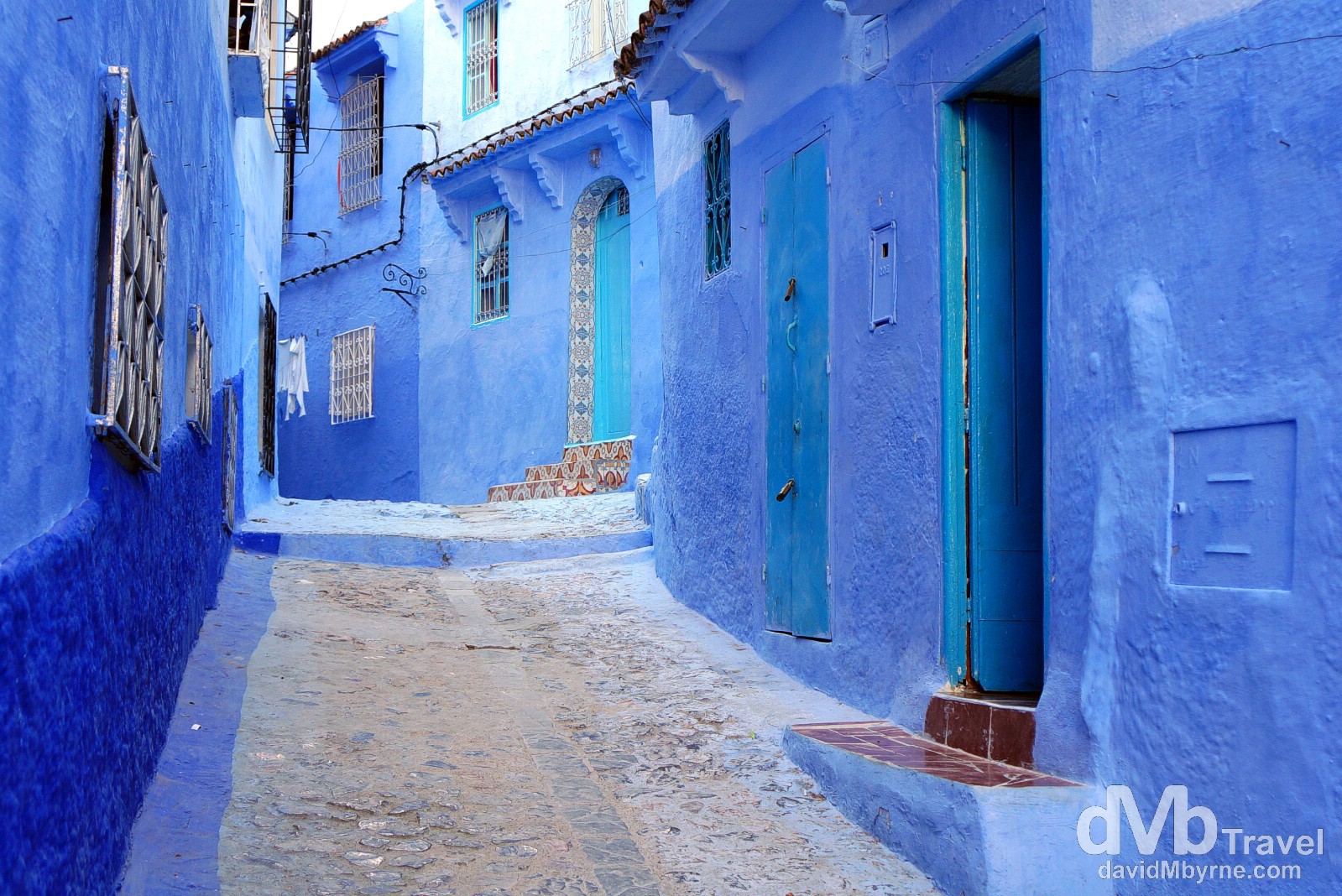 A typical lane in the Chefchaouen medina, one of the loveliest in Morocco. The Old Town medina is compact enough with winding paths, steep inclines & surprises around each blind corner. Most of the lanes & buildings are painted a blinding blue-white giving them a fresh, clean look with terracotta tiles adding a distinctive Spanish Andalusian flavour not found south of here. Chefchaouen, Morocco. May 31st, 2014 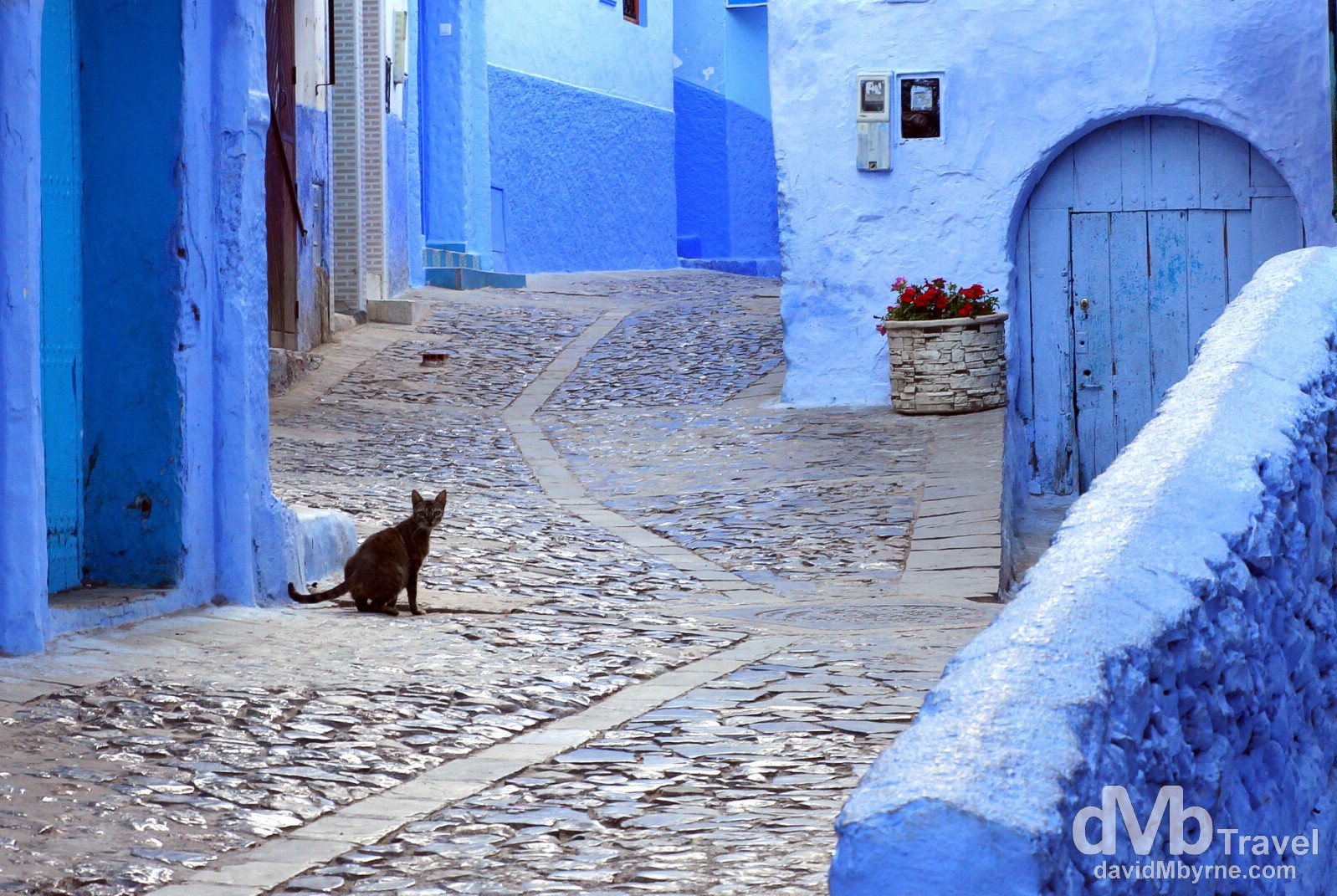 The medina lanes, even the so-called busier ones, are quiet enough most hours of the day. But get up early like I did on this morning and you’ll have them all to yourself, or at a push you’ll have to share them with a stray cat or two of which there are plenty roaming the town. Chefchaouen, Morocco. June 1st, 2014 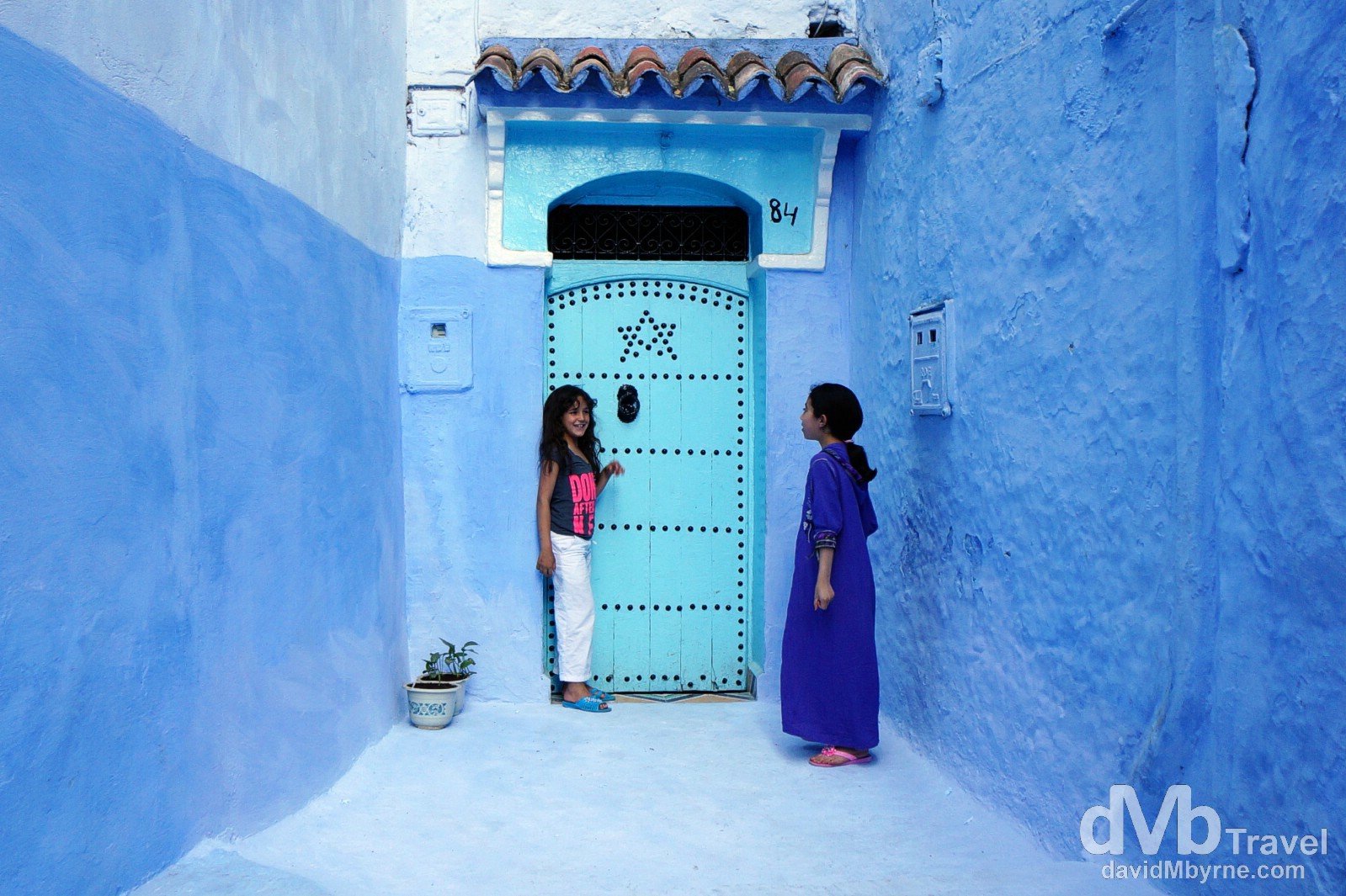 Needless to say Chefchaouen’s Old Town medina is a place of extraordinary light & colour. Walking the lanes you almost expect the Smurfs to appear from behind the charming doors or from around the next blind corner. But they never do – it’s all suspicious-looking locals, those of an older ilk, or friendly kids like these two girls I encountered on my first evening exploring the medina lanes. I interacted with these girls in Spanish but only after realising they had no idea what I was saying to them in French. I noticed Spanish was an option for getting by in Fes, my previous stop in the country, but here Chefchaouen it’s widely used & understood, something I’m OK with – my Spanish is way better than my French. Chefchaouen, Morocco. May 30th, 2014 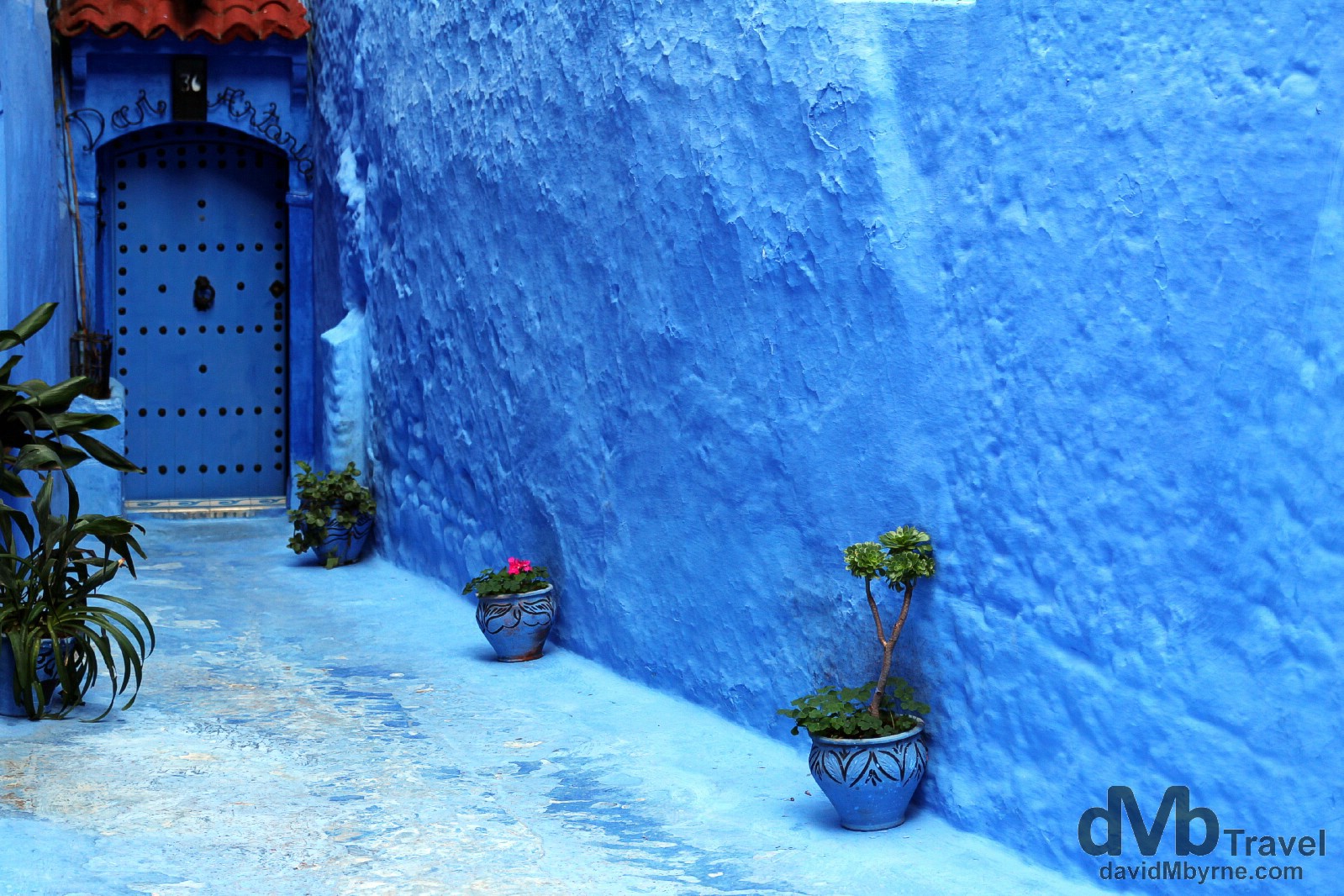 The lane to my guest house, Dar Antonio. Blue leads the way to this charming little guest house but inside it’s just one big kaleidoscopic colour overload. In the medina in Chefchaouen, Morocco. June 1st, 2014

Even the Chefchaouen attire is blue. This is my favourite capture from my time in the town, that of a lady walking in the lanes of the medina on my first evening in the town. I didn’t realise until after posting this picture to my facebook page and another picture to my Instagram account (found here), both of which were captured on my first foray into the medina lanes, that all subjects were wearing blue or blue-tinted clothing. Totally coincidental of course but eerily appropriate at the same time. Chefchaouen, Morocco. May 30th, 2014

A Chefchaouen Titbit
A somewhat interesting Chefchaouen fact to end with. The pale-blue tone prevalent in the Old Town medina today, & for which the town is known, was only introduced in the 1930s by Jewish refugees – previously windows & doors had been painted a traditional Muslim green. Well I never.