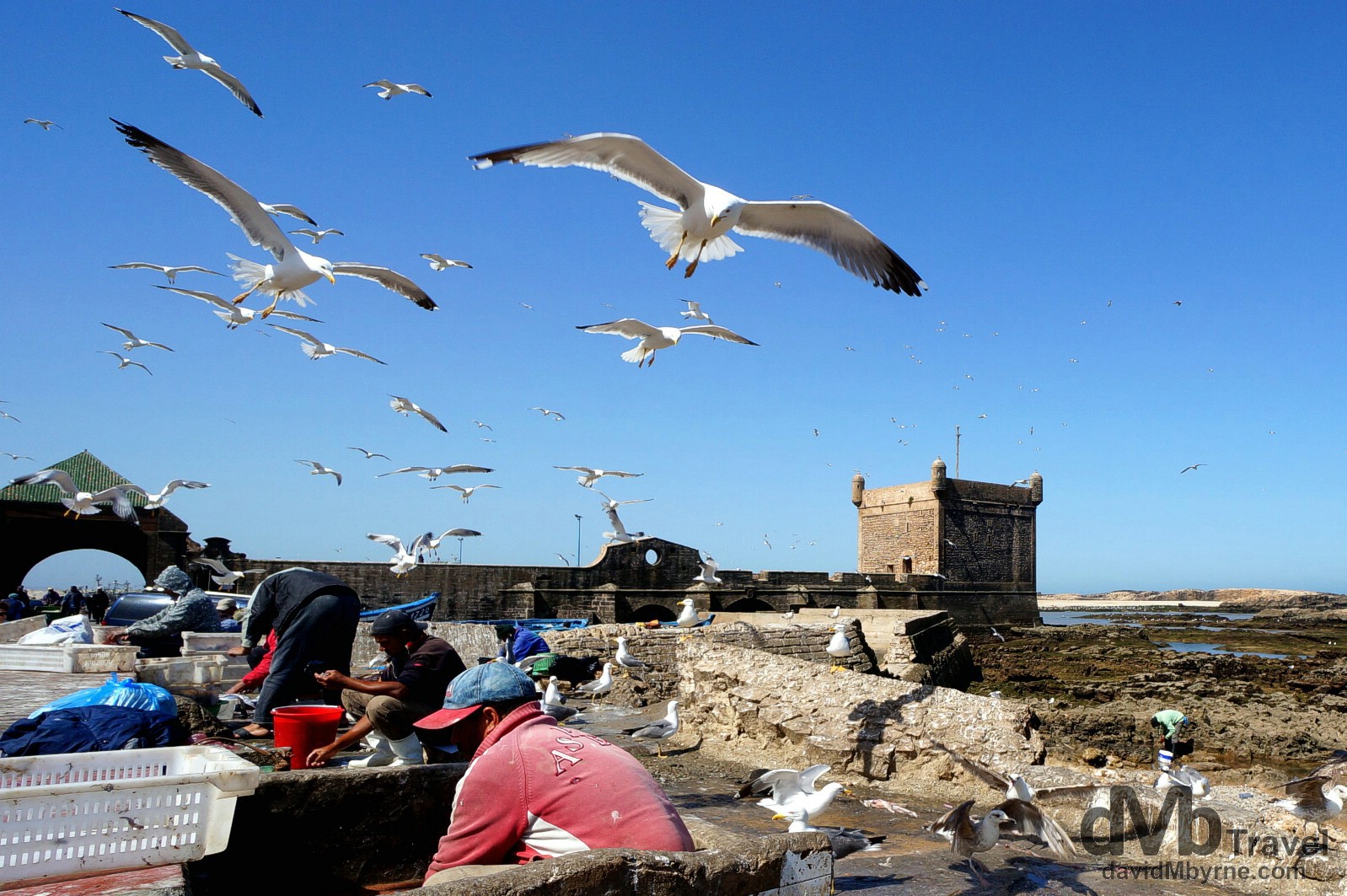 I arrived in Essaouira earlier today. It’s a busy town; there are lots of tourists around. It’s that kind of place, the first firmly-on-the-tourist-trail location I’ve visited in Morocco.

It’s nice here, a large part of the attraction I guess. 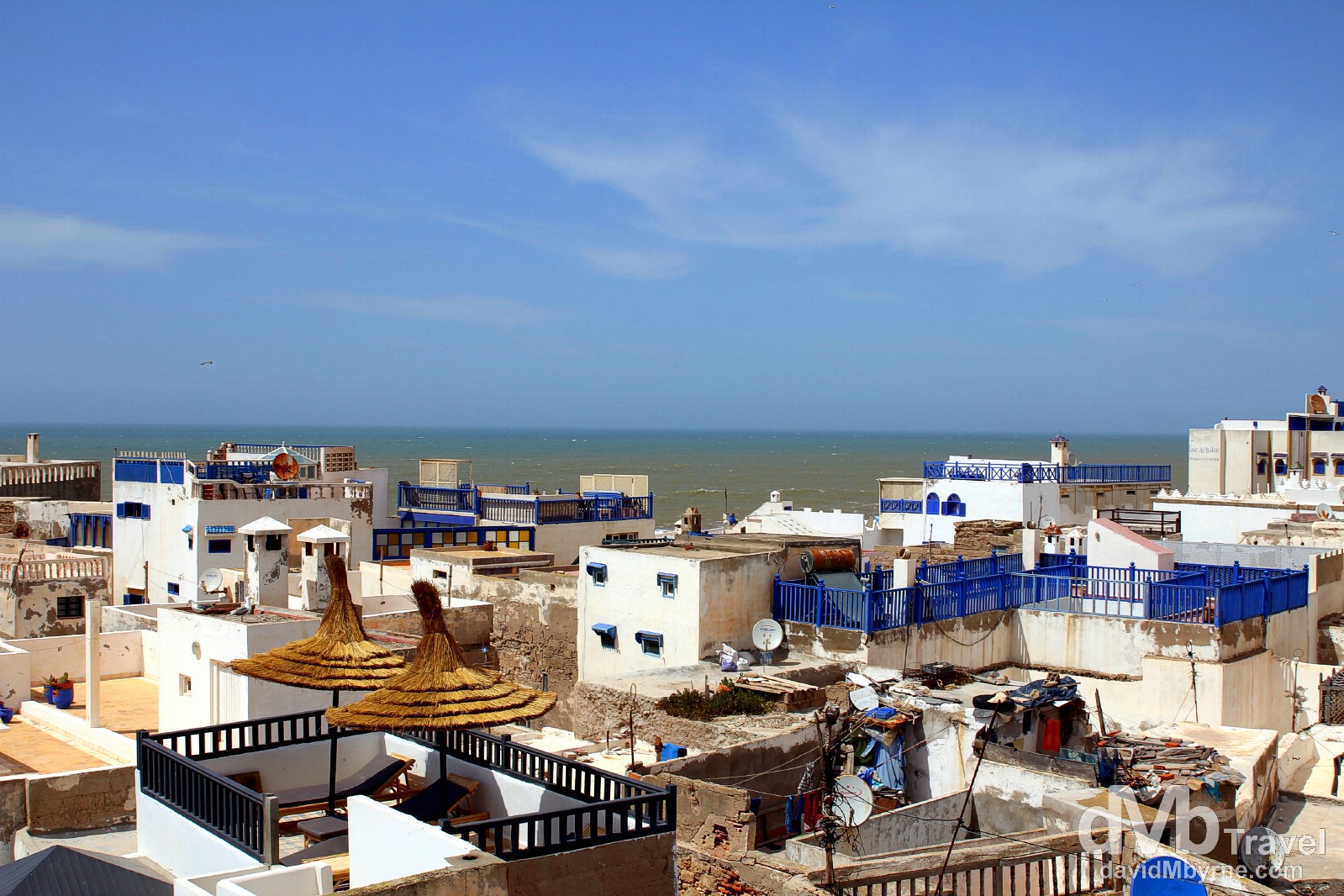 Rooftops of the median and the Atlantic Ocean as seen from the terrace of Riad El Pacha. From this vantage point Essaouira is a very picturesque jumble of whitewash & blue. Essaouira (

Essaouira, a 60s Moroccan hippy haven, is a small town but it packs in a lot – a bustling fishing port, a lazy beach, & a late 18th-century UNESCO-listed walled medina, the town’s main event. The medina is a labyrinth of narrow streets & alleys full of shops, workshops, cafes & colourful, whitewashed houses with heavy wooden doors & clay pots. I’m here for a few more days so I have ample time to (attempt to) photograph it. I went on my initial amble this afternoon armed only with my iPod, letting myself be guided solely by sights, sounds, smells & intrigue. Surprises abound around every corner, and then some. This place is one hell of an assault on the senses. Photographing it is going to be exhausting. 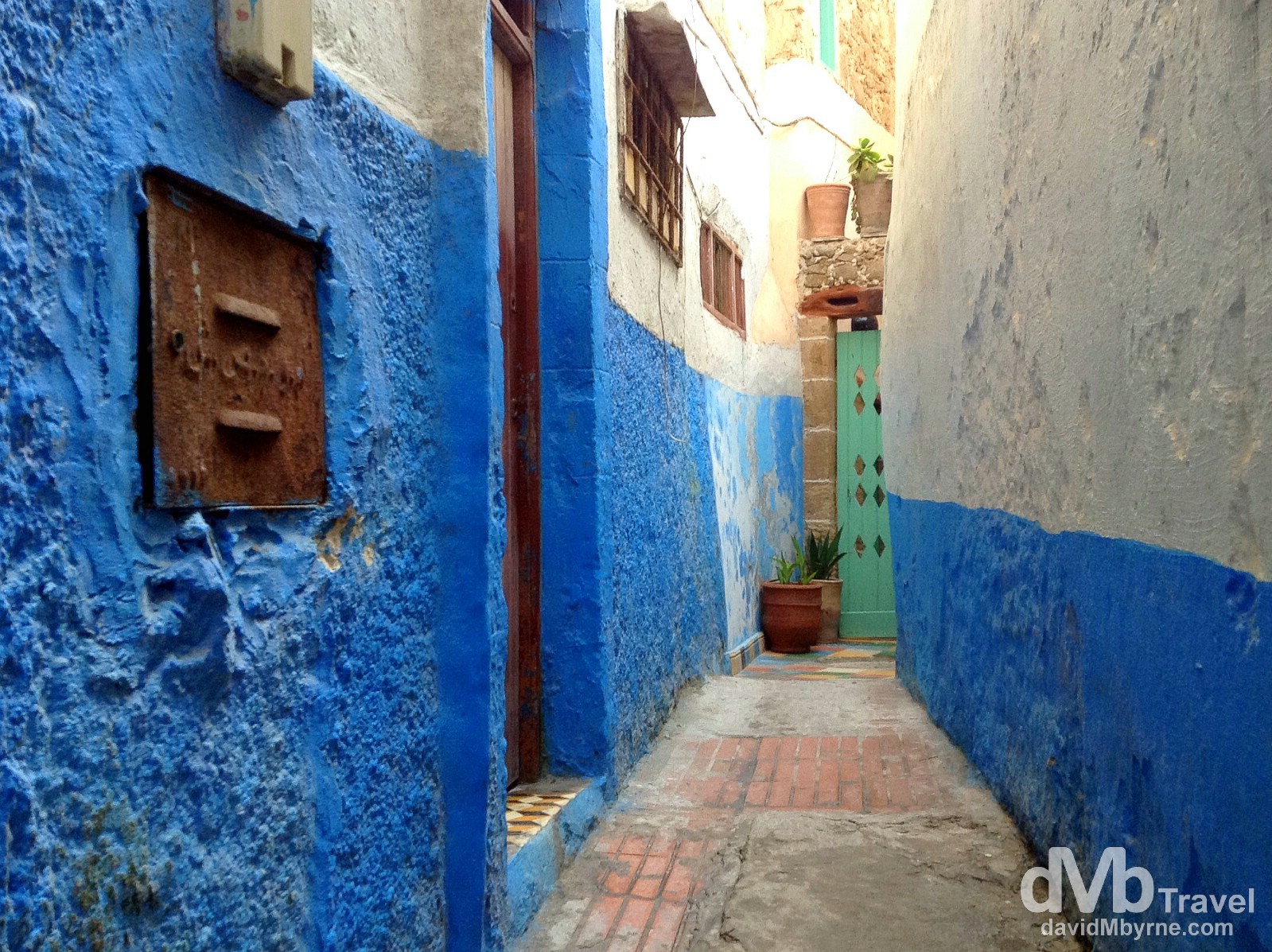 A tight residential lane in the medina of Essaouira, Morocco. May 2nd, 2014 (iPod)

Essaouira is an exceptional example of a late-18th-century fortified town, built according to the principles of contemporary European military architecture in a North African context. Since its foundation, it has been a major international trading seaport, linking Morocco and its Saharan hinterland with Europe and the rest of the world.

One of the highlights of Morocco thus far has been the accommodations. Tiles & lots of colour are the definite order of the day. 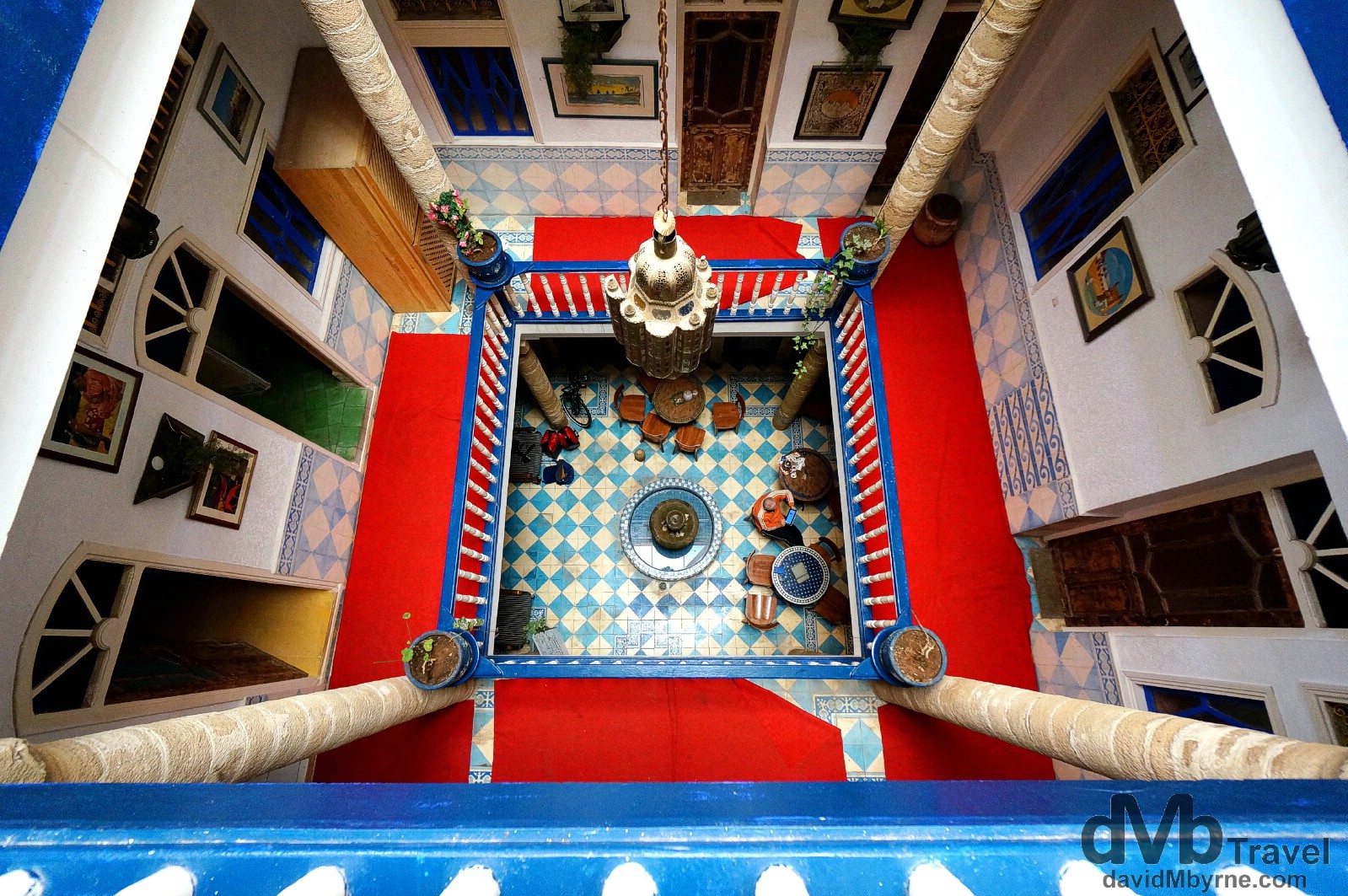 This is my accommodation here in Essaouira, Riad El Pacha. A riad is a traditional Moroccan house, typically one with a roof terrace & set around an internal garden (to me if it’s internal then it’s no garden but who am I to question that but a paying guest). I’m on the top, third floor so this is my view when I open the door to my room which unfortunately isn’t quite as picturesque. Riad El Pacha, Essaouira, Morocco. May 3rd, 2014

I was right. Essaouira is an exhausting place to photograph. I’ve had a busy last few days, a few days I’ve which I have been made to feel totally inadequate as a photographer. Be warned – Essaouira will do that to you. Here is some of what I could come up with. 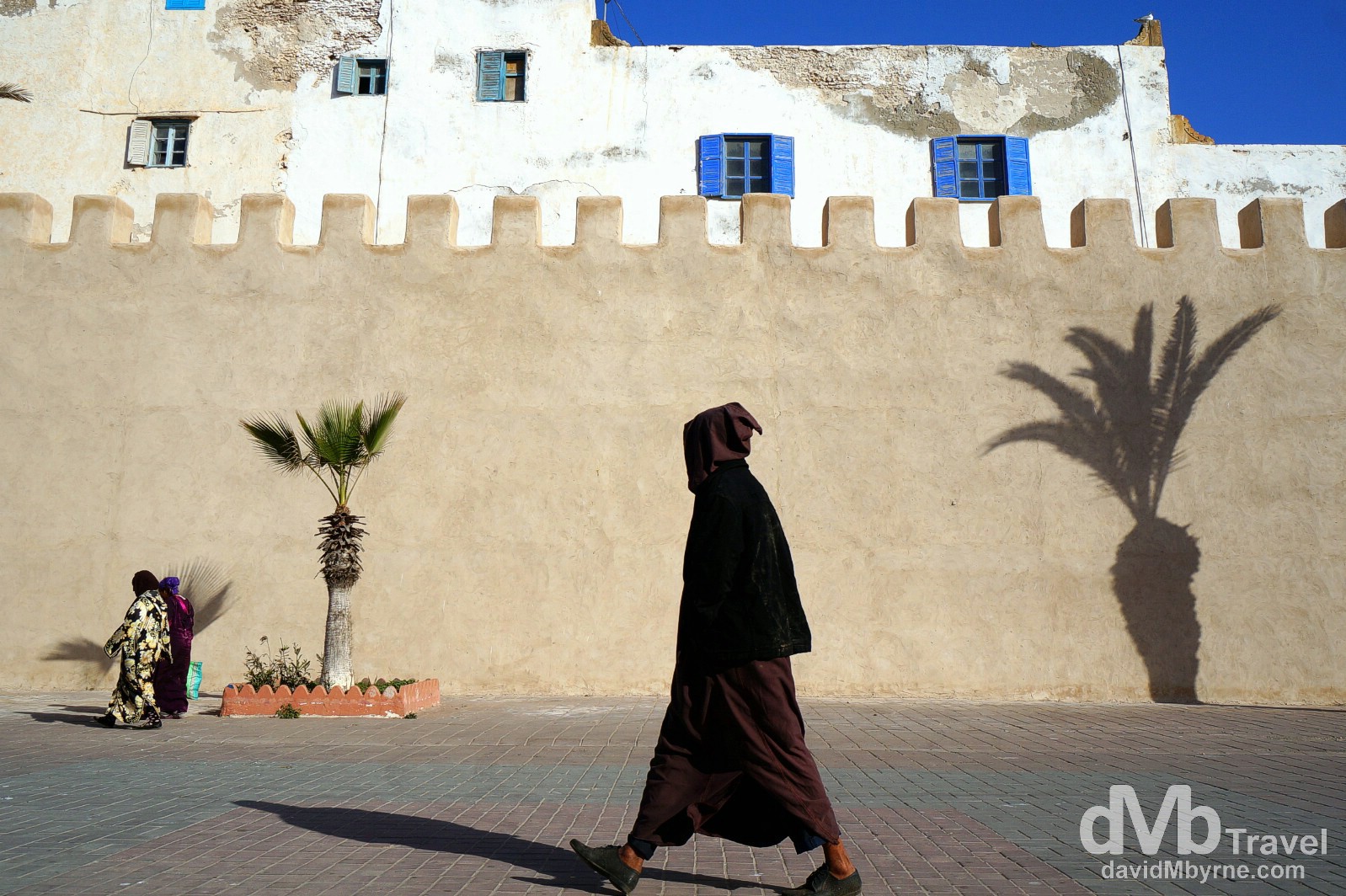 Walking outside the walls of the UNESCO World Heritage listed medina in Essaouira, Morocco. May 3rd, 2014 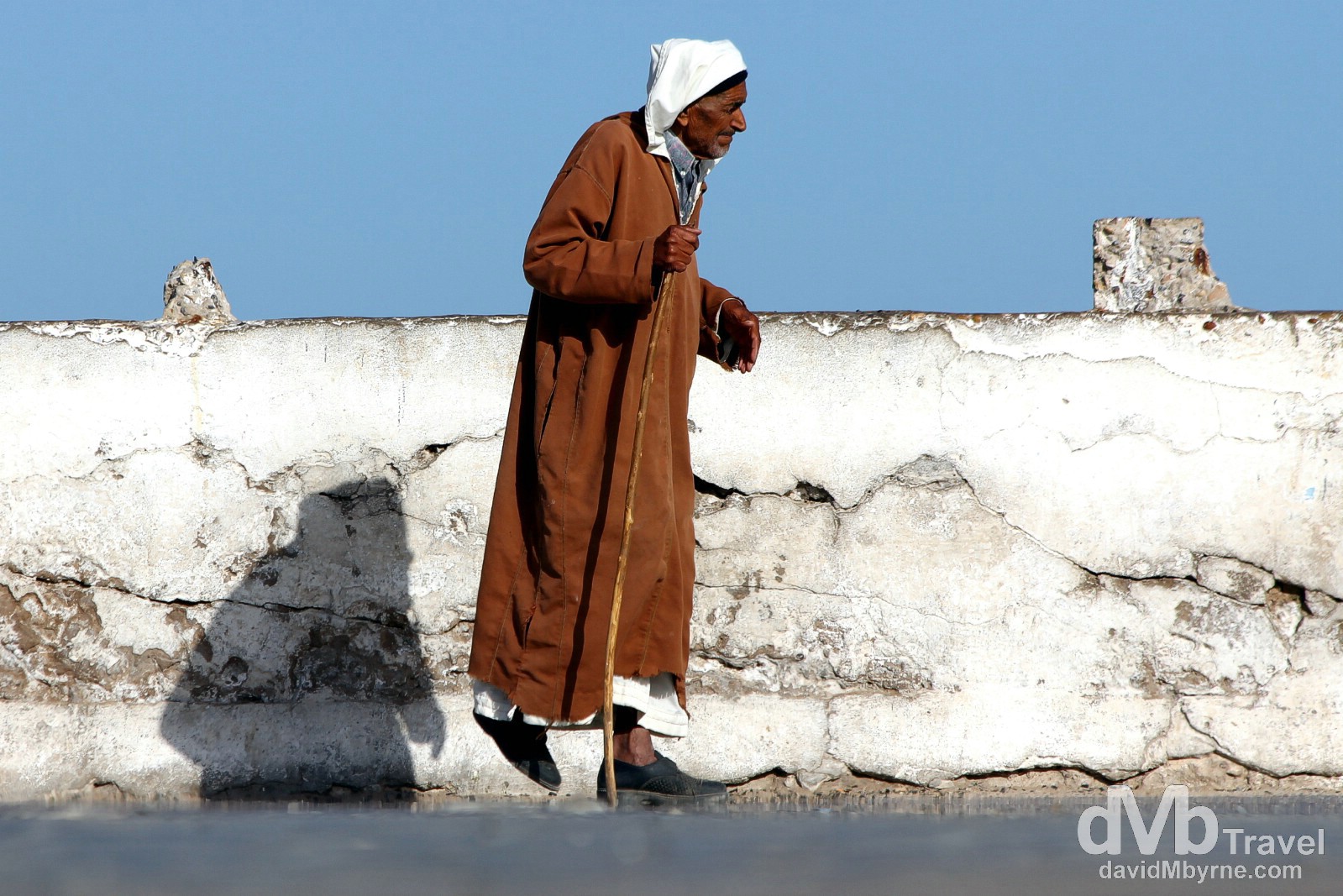 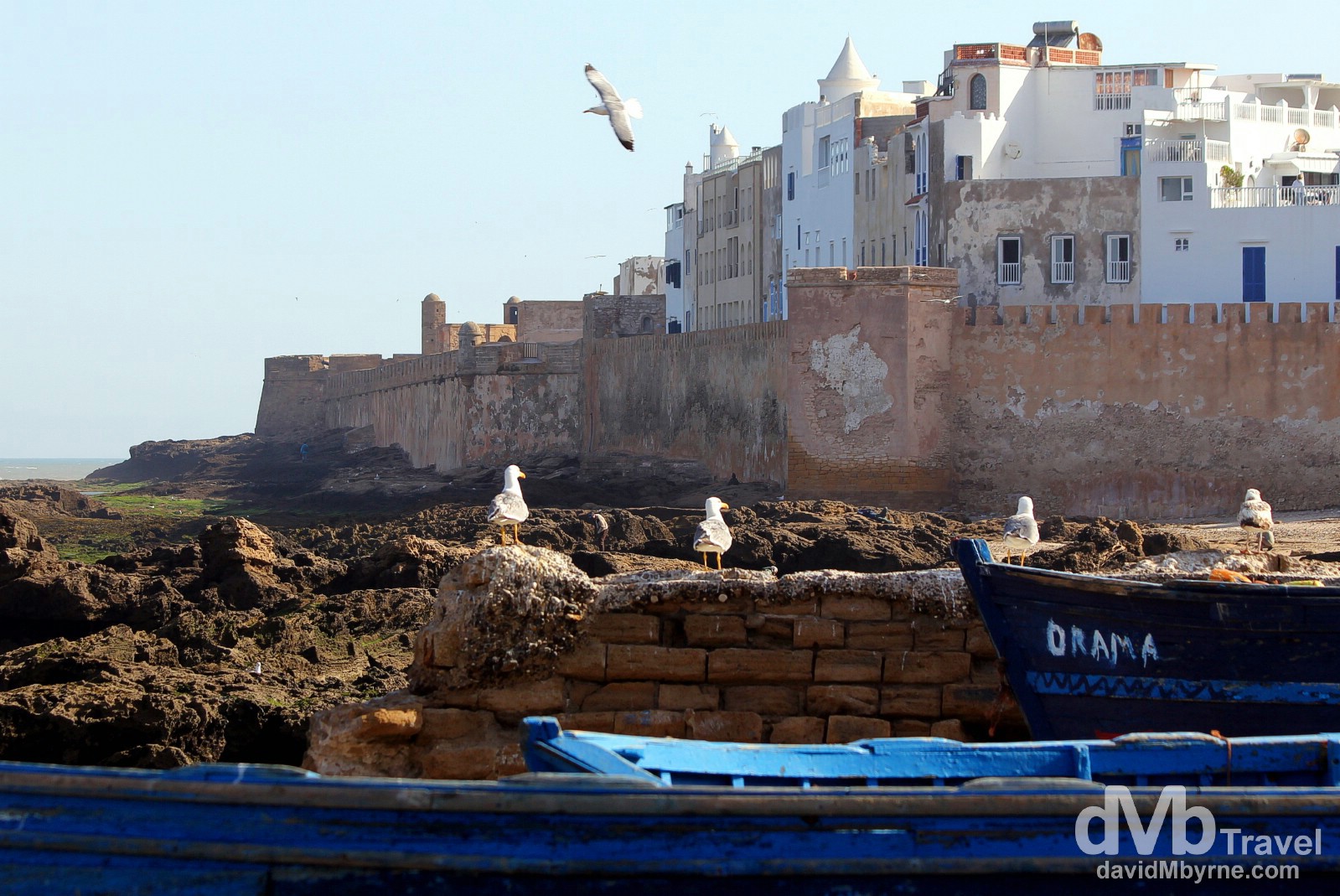 Essaouira is probably the blustery Moroccan Atlantic coast’s most historic port & fortified town all in one. There has been a settlement here since well before the construction of the present late-18th century fortified town which was built in a combination of European & Moroccan styles. Its layout is a prime example of European military architecture in Northern Africa & it was added to the UNESCO World Heritage list in 2001. This is a picture of the wave-lashed, Atlantic-fronting ramparts of the Essaouira medina as seen from the port. Essaouira, Morocco. May 3rd, 2014

Essaouira’s working port is a bustling place most of the day but especially in the mornings when the day’s catch is brought ashore. Gulls & the smell of fish innards are ever-present with gulls swooping overhead for remnants of fish being gutted. Essaouira, Morocco. May 3rd, 2014 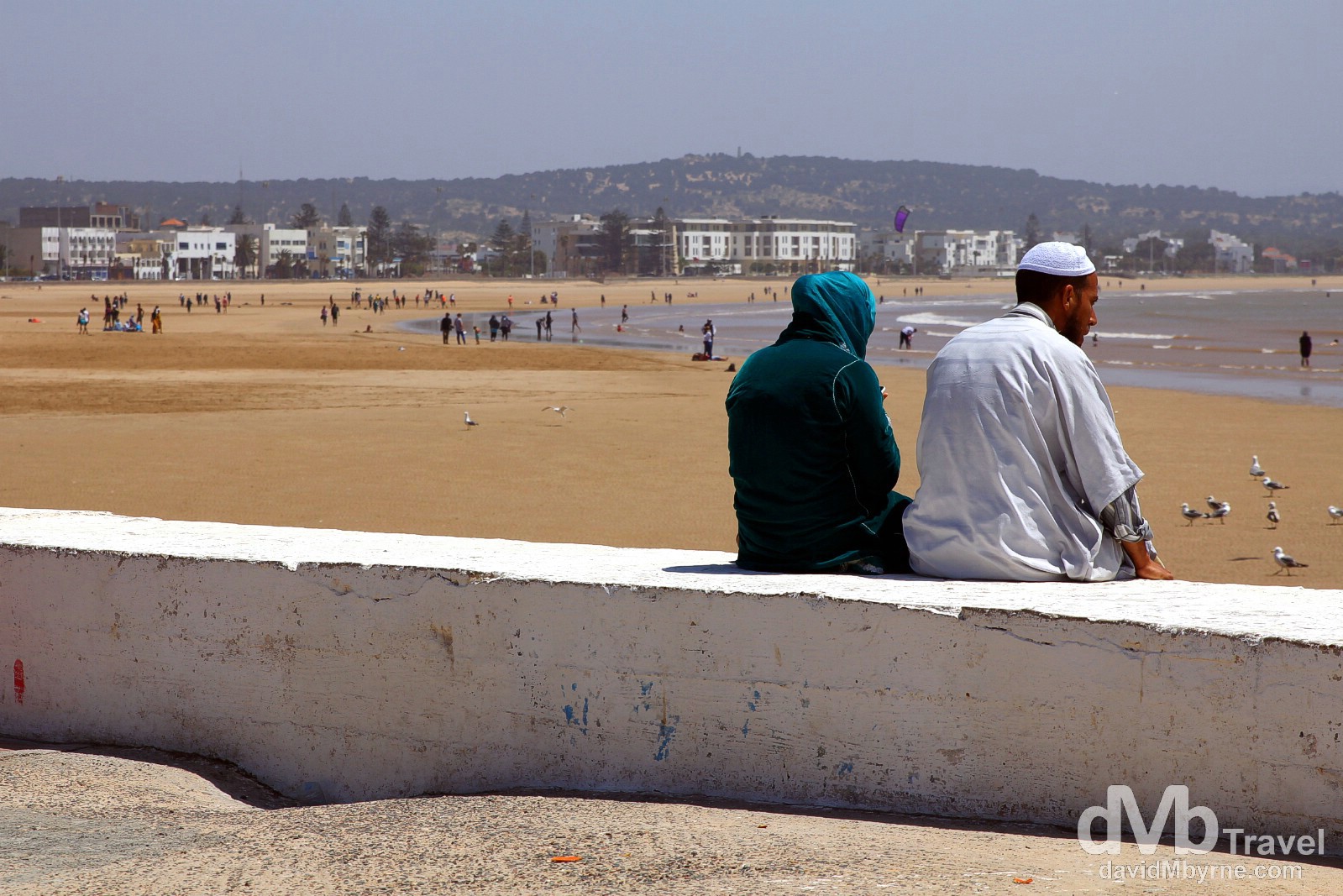 Overlooking the beach in Essaouira, Morocco. May 3rd, 2014 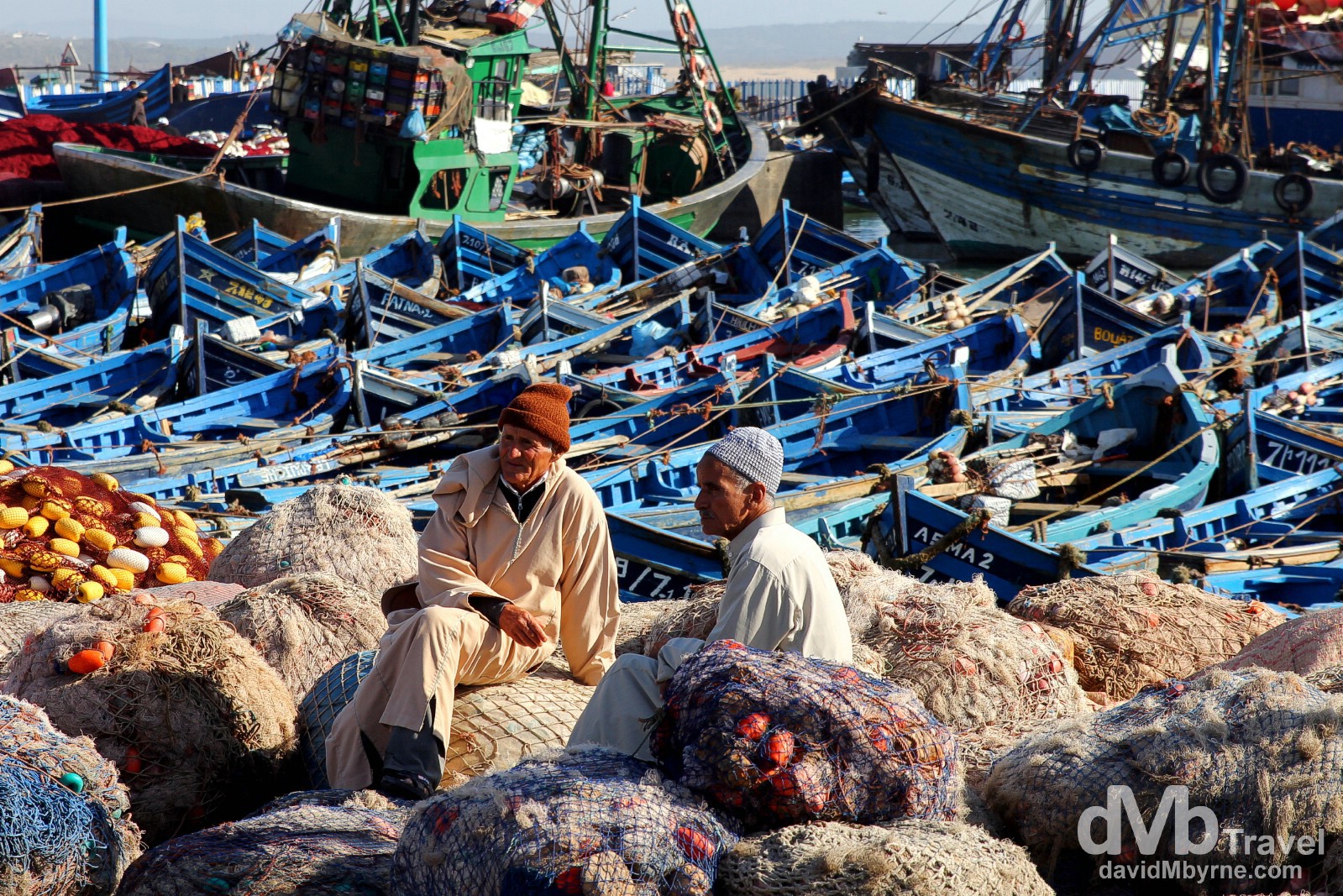 The classic postcard shot of Essaouira is of the blue boats tied up in its port. Here two locals sit on the nets in front of the boats. Essaouira, Morocco. May 3rd, 2014 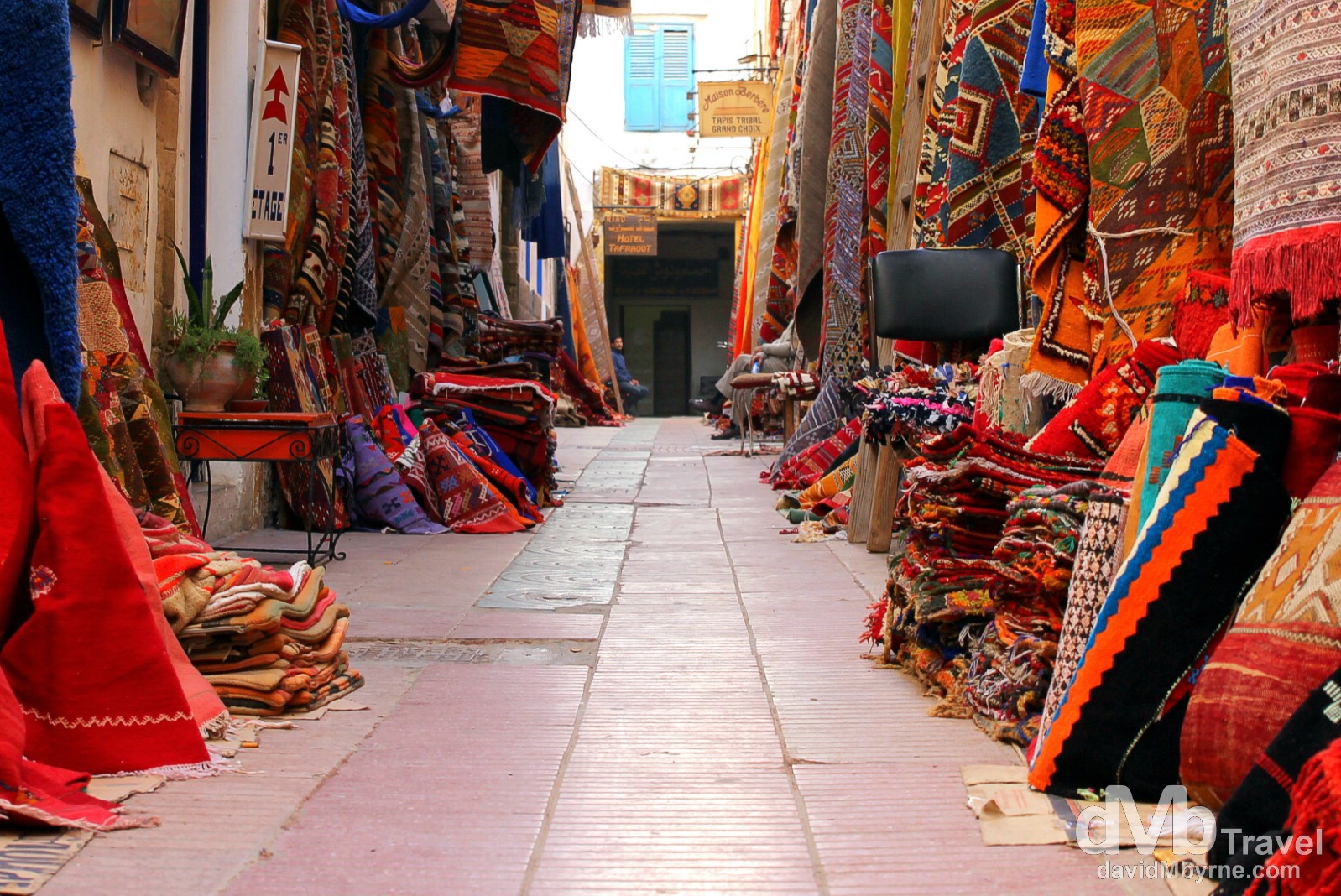 The labyrinth of narrow, winding lanes in Essaouira’s medina makes it a great place to stroll. Exhausting but great. Most are lined with colourful shops like this lane of carpet shops, shops mostly aimed at the tourist of which there is no shortage of. Essaouira, Morocco. May 3rd, 2014 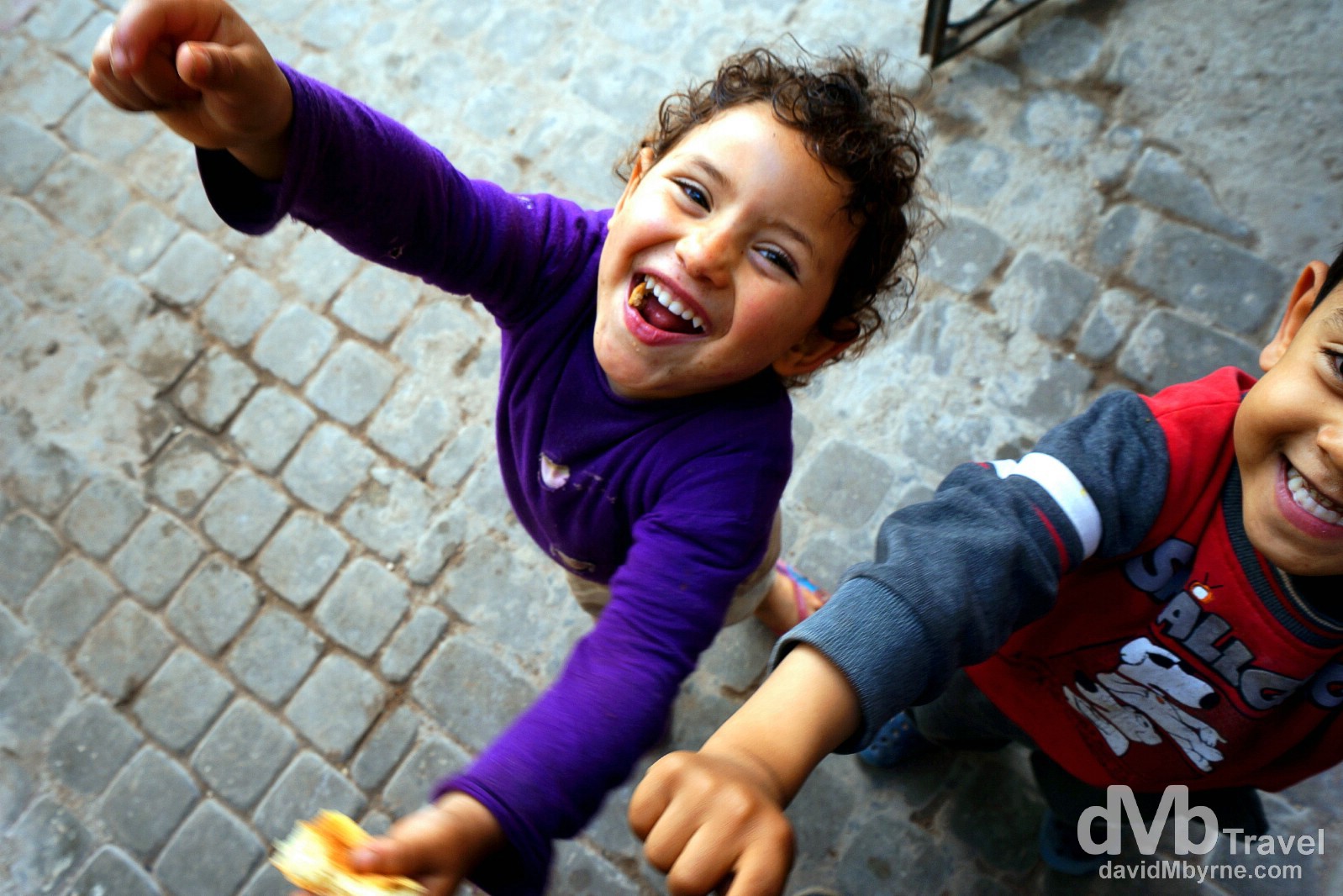 These kids just wanted what all kids used to seeing tourists seem to want the world over – to see their image on the back of the camera. Essaouira, Morocco. May 4th, 2014 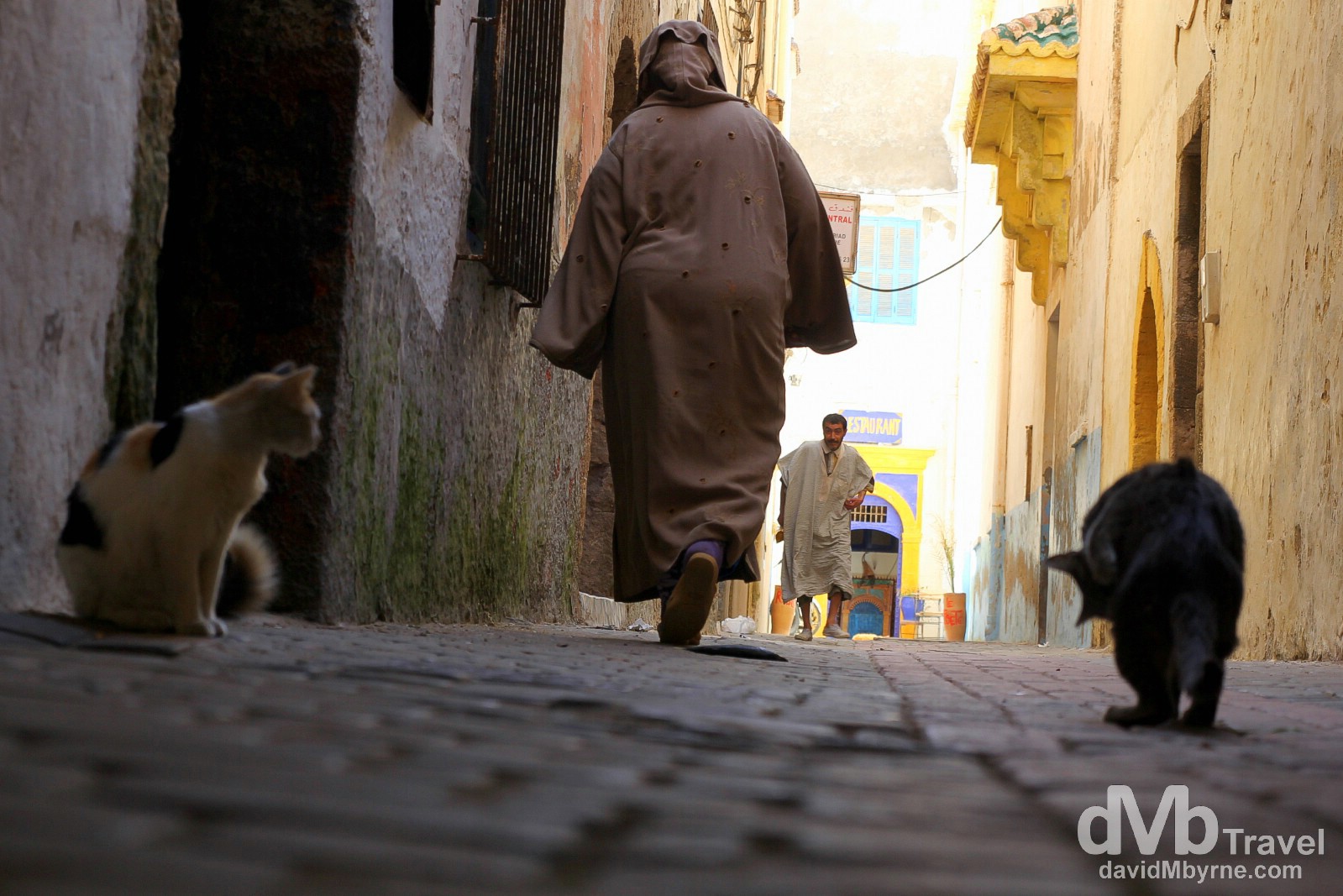 More Hard Work Ahead || Marrakesh Bound
I’m leaving tomorrow, saying goodbye (for good) to the Atlantic coast. I’m heading inland to Marrakesh, about 2 hours east of here. I read up on it – Marrakesh – today while sitting in one of the many cafes I frequented here in Essaouira over the past few days. Seemingly mayhem is what Marrakesh serves up on a daily basis, a city of ’mind-boggling distractions’ according to Lonely Planet. Oh boy. That’s going to be hard work too.