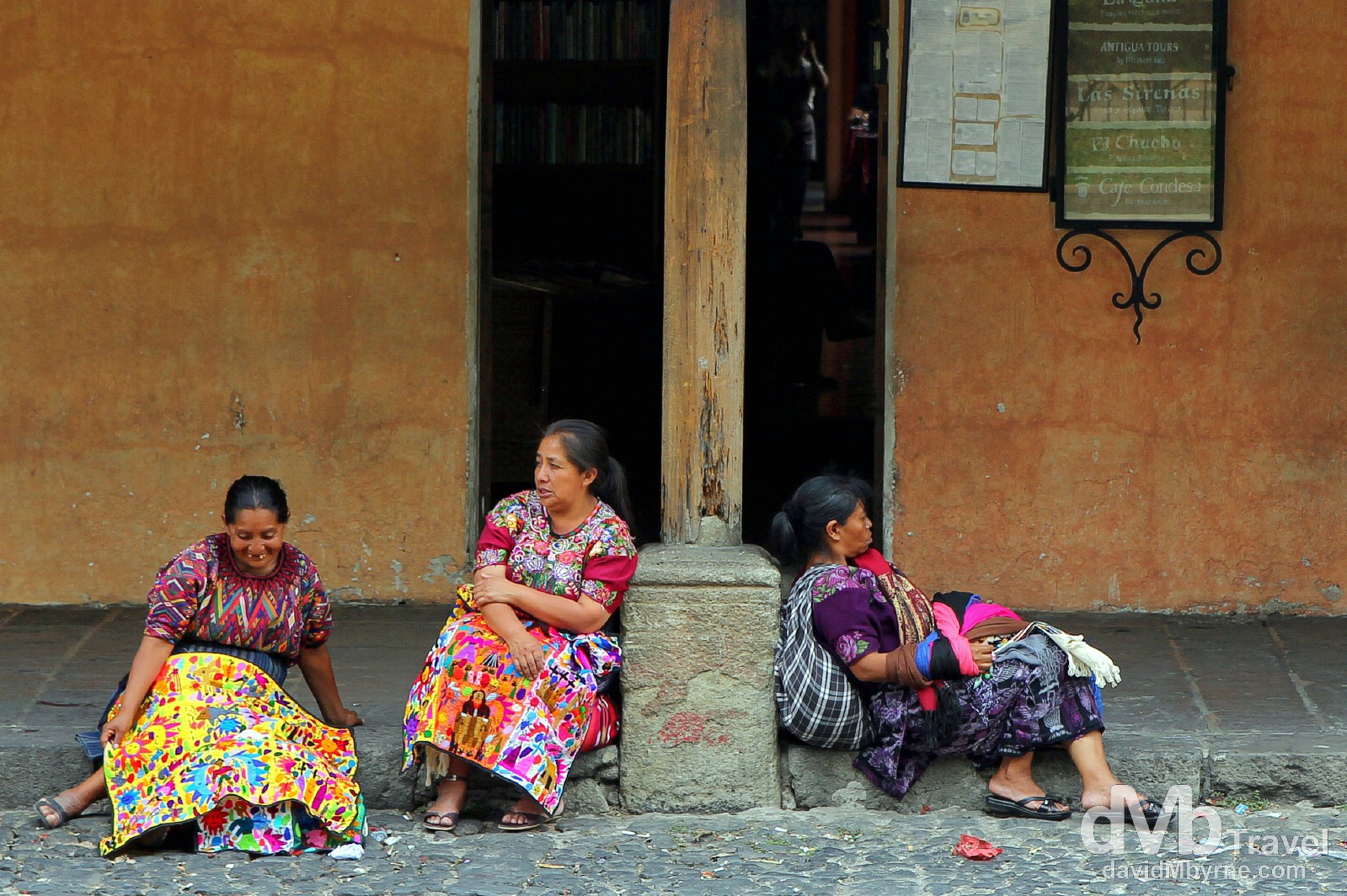 When travelling in the Central American country of Guatemala it’s hard to avoid Antigua (not that one should, of course). I didn’t avoid it for long spending most of yesterday, my third day in the country, on buses getting here from Flores in the north.

Long day of travel & a few hiccups along the way but finally made it to Antigua. Day 439 http://t.co/YXaH9p8A24 #antigua #travel #guatemala

Antigua is traveller centre in Guatemala, and for good reason; it provides all the traveller comforts – the hospedajes (guest houses), the Wi-Fi enabled cafes/bars & a glut of travel-related agencies – all of which means this is one of the most popular places in the region to come learn Spanish. People come here for days but end up staying weeks. It’s that kind of place.

Three Mayan ladies taking a break from peddling their wares by the edge of Parque Central, Antigua (

Antigua || Then & Now
Antigua is the cultural capital of the country and is by all accounts one of the finest colonial cities in Central America – I’ve seen little, as of yet, to compare it to. It is pretty. The city is famous for its well-preserved Spanish influenced Baroque architecture & a number of spectacular ruins of colonial churches that date back to the 16th century, all of which attained UNESCO World Heritage site status as far back as 1979.

Founded in March 1543, the city was once the capital of Spanish Colonial Central America, an area that encompassed present-day Chiapas (in southern Mexico), Guatemala, El Salvador, Honduras, Costa Rica & Nicaragua. Guatemala, as well as the other aforementioned Central American countries, gained their independence from Spain in 1821 and became independent nations in 1840 following the dissolution of the United Provinces of Central America. Antigua served as the cultural, economic, religious, political and educational centre for the entire region & flourished as a result. However, the Spanish grew tired of it being flattened by earthquakes so after the massive earthquake of 1773 they relocated the capital to present-day Guatemala City, a short distance to the east.

The cobblestone streets, parks and plazas, convents & ornate churches, all set against a backdrop of three towering dormant volcanoes (& all hidden behind rain clouds thus far), give the place an enchanting and romantic colonial charm, at least during daylight hours. 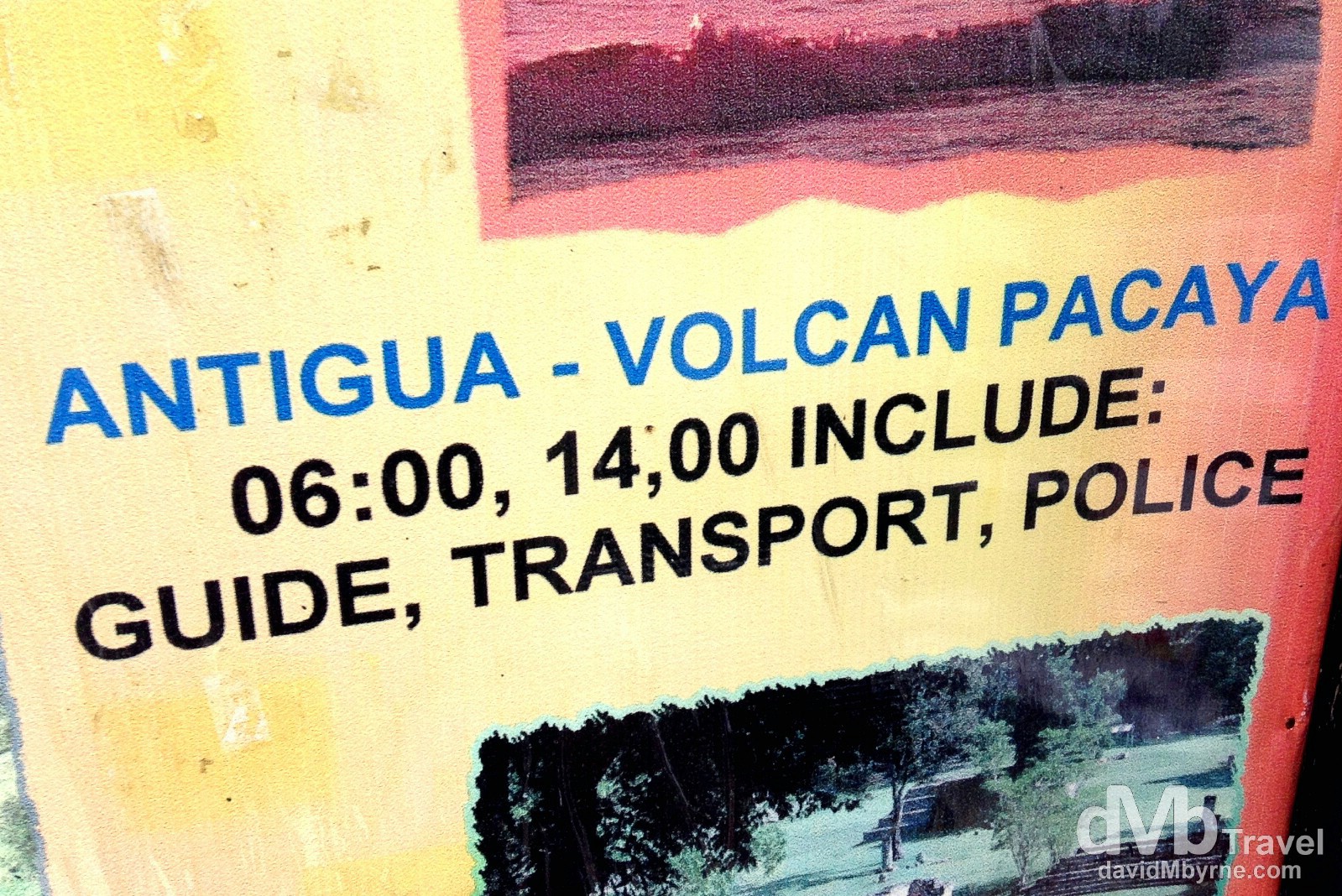 Unfortunately, & belying the friendly nature of its people, Guatemala wouldn’t be the safest of places. The insecurity means most stores – those that do not operate from behind iron bars (most seem to do just that, and all do after dark) – need to hire armed guards & tours organised for tourists like me need to supply protection in the form of police, just in case. Antigua, Guatemala. May 19th 2013 (iPod)

Better pack some extra camera batteries, people – and throw in some more memory while you’re there. You’re about to touch down in a land that was made to be photographed, and that you’ll be struggling to do justice to with mere words once you return

I arrived last night so today was my first real look at Antigua. It was overcast and rained for most of the day so I seemed to concentrate mostly on the people of the city. I’m leaving for the Guatemalan highlands tomorrow but I’ll be back in the city before too long, and certainly before I leave Guatemala for good. I’ll be hoping then for better weather – after all, there’s a (very) photogenic town out there still waiting to be captured (Update || May 26, 2013 || My return to Antigua can be found here. And yes, the weather did improve & the city was more photogenic). 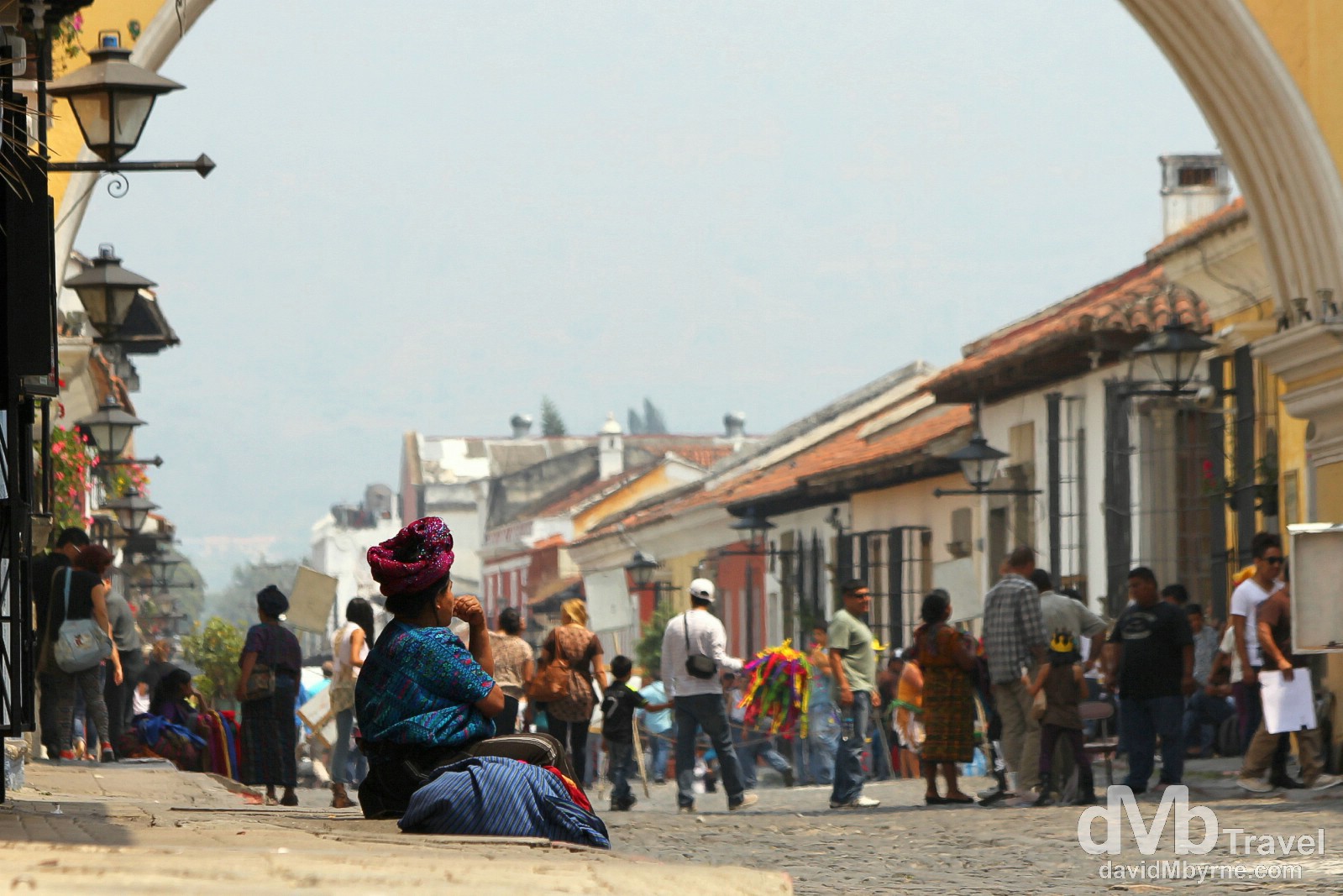 A Mayan lady sit close to the Santa Catalina Arch on 5a Avenue Norte, Antigua, Guatemala. May 19th 2013. 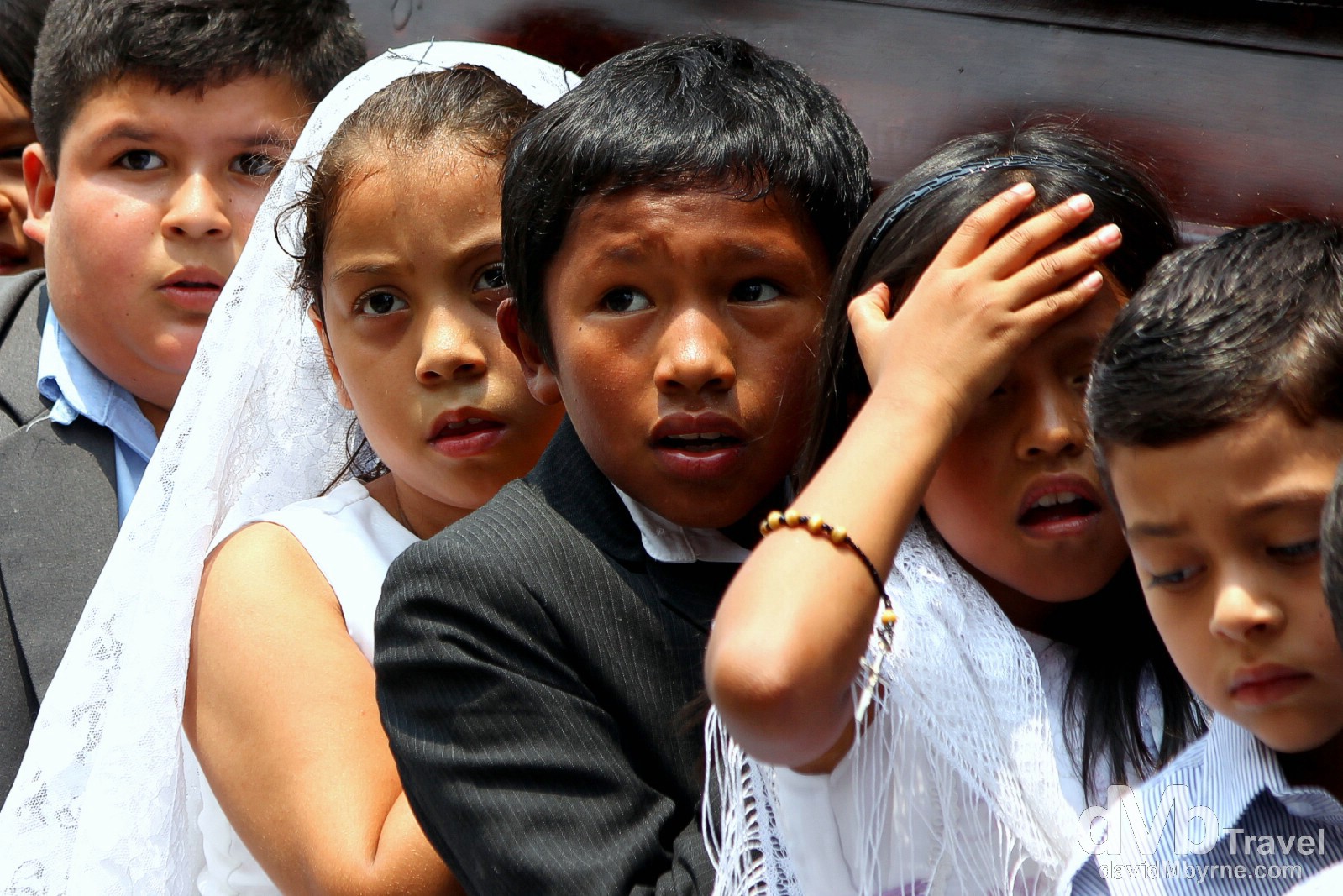 Children carrying a coffin as part of a religious ceremony in Parque Central, Antigua, Guatemala. May 19th 2013. 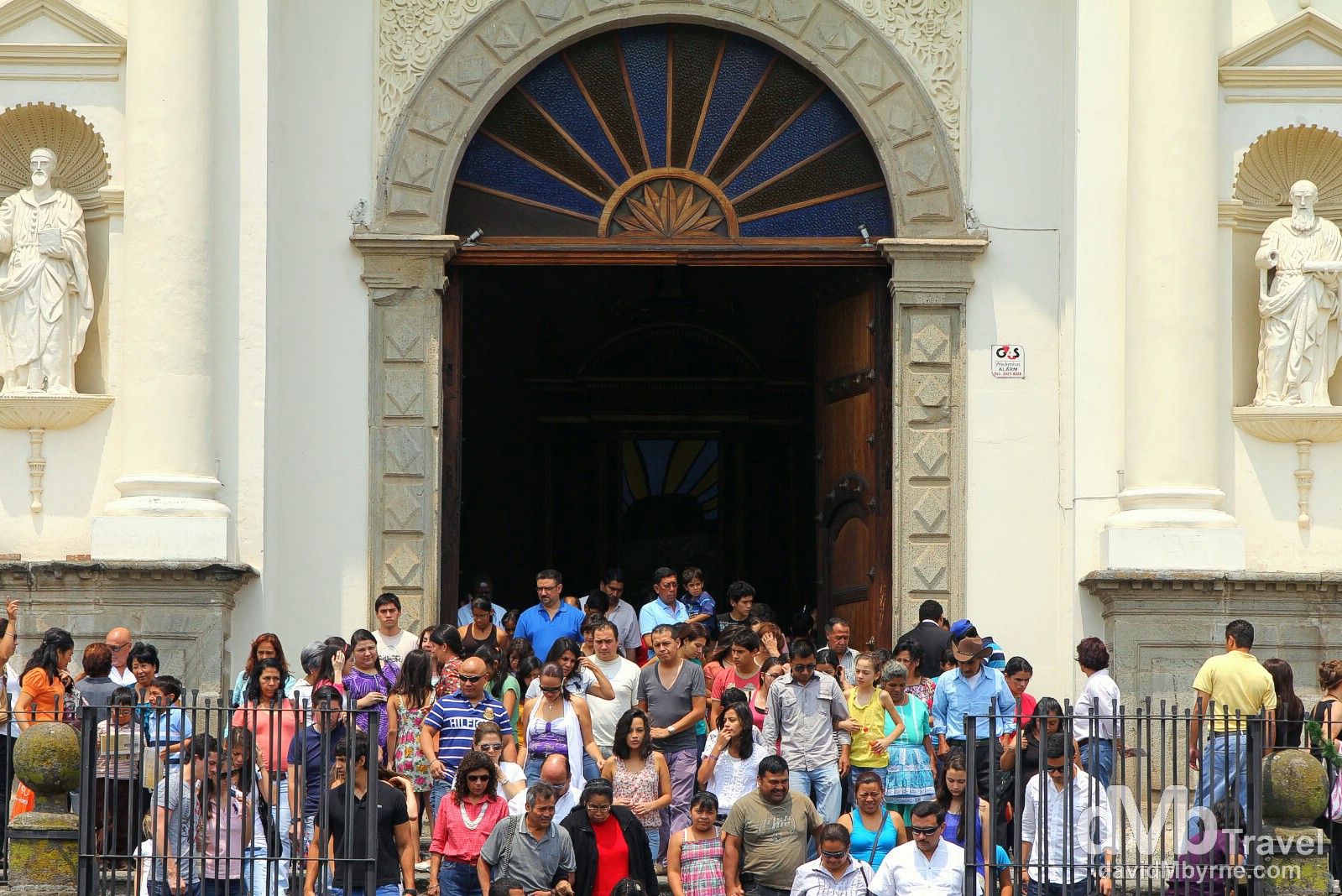 Exiting Catedral de Santiago after Sunday service as seen from Parque Central, the popular town gathering place for locals and visitors alike. The 1542 Cathedral de Santiago, which resides on the park’s east side, has been damaged by earthquakes many times – it was badly ruined in the big quake of 1773 and only partly rebuilt between 1780 and 1820. In the 16th and early 17th centuries, Antigua’s churches had lavish baroque interiors, but most – including this on – lost this richness during post-earthquake rebuilding. As a result most of Guatemala’s churches are, in my opinion, more impressive when viewed from the outside, especially if the sun is out. Antigua, Guatemala. May 19th 2013. 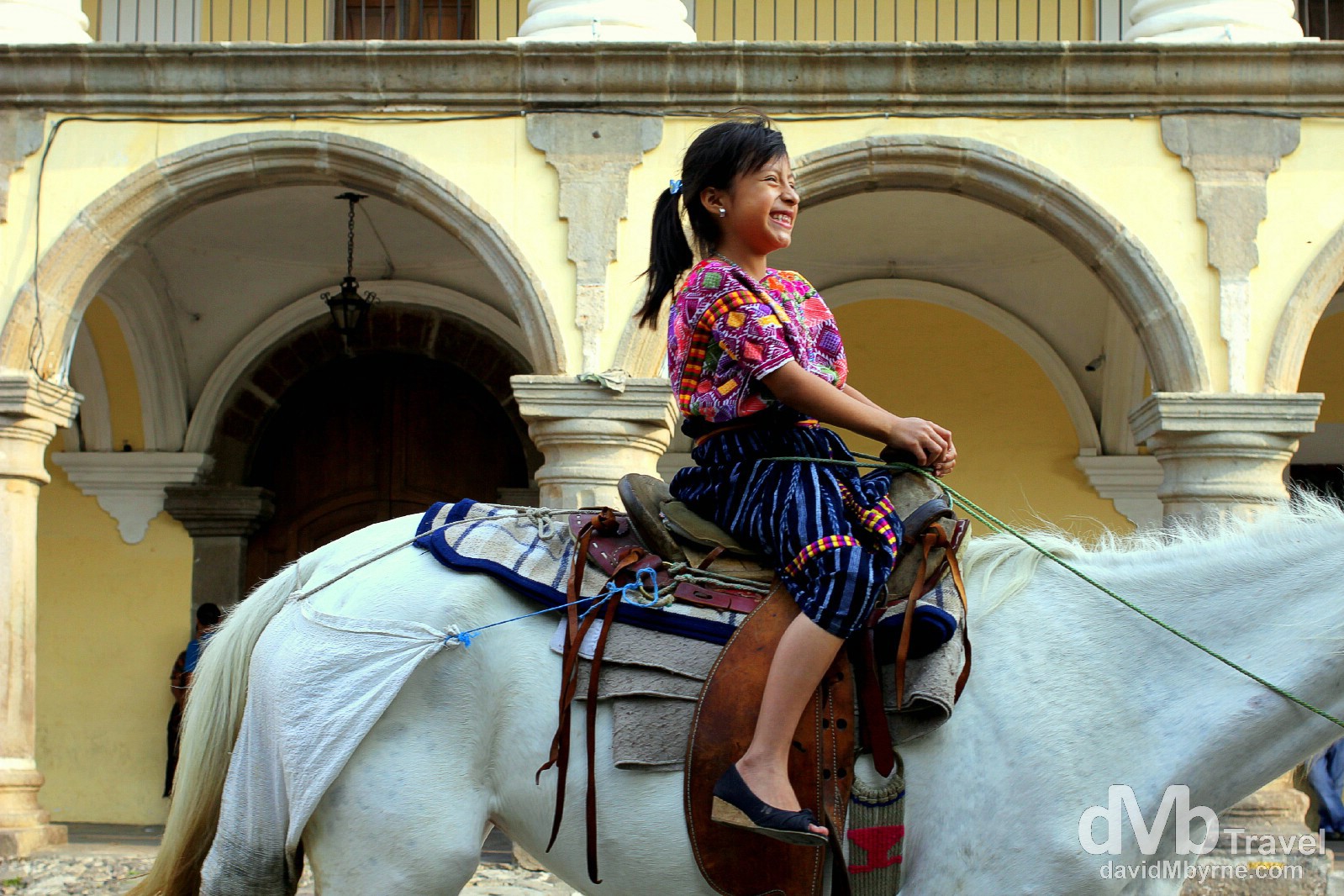 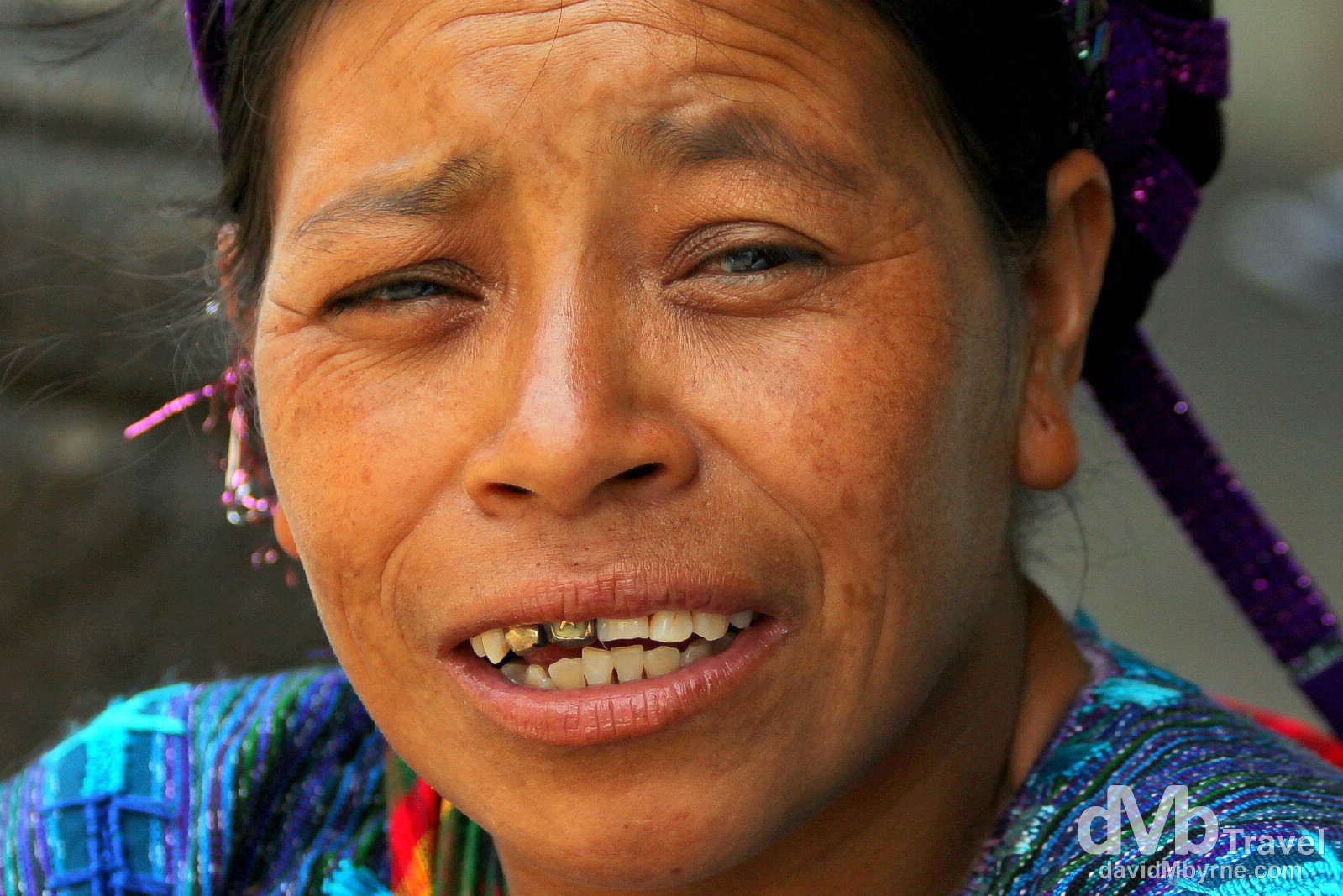 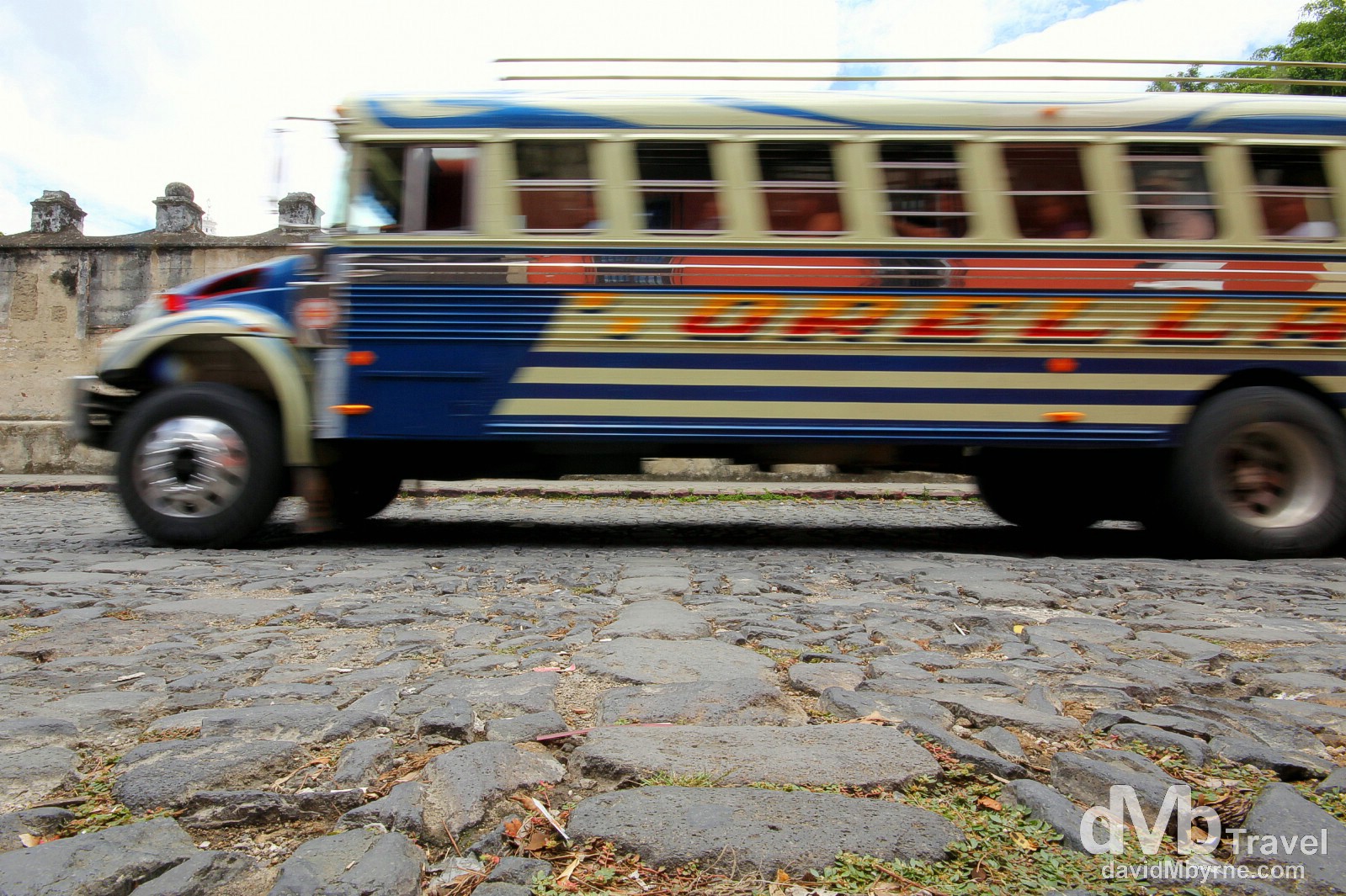