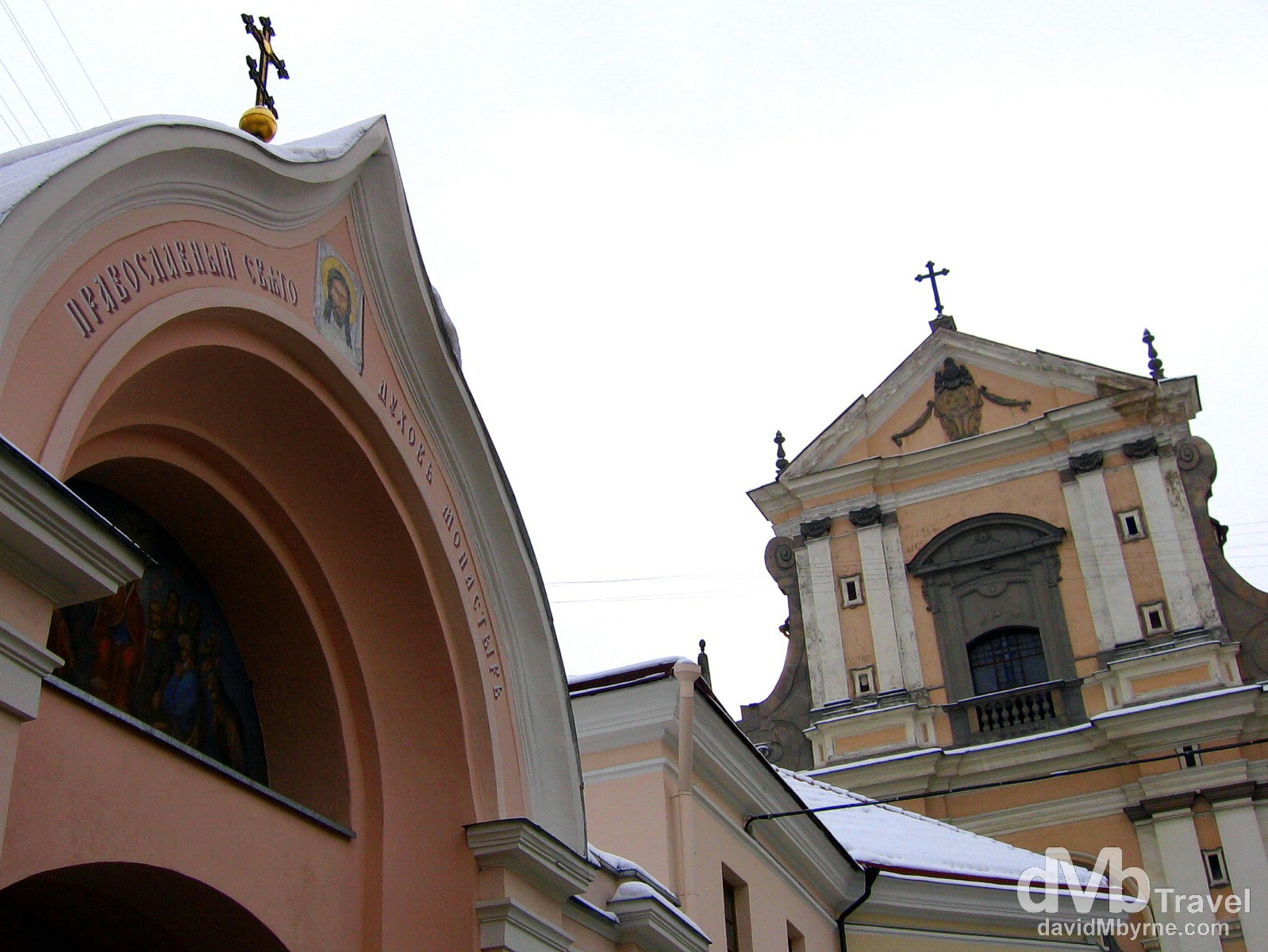 Vilnius, the capital of the Baltic state of Lithuania, is different. Very different. There seems to be a bizarre, anything goes mentality wafting through the air here, something that goes hand in hand with the the very bohemian, almost gypsy look & feel of the city, the country’s capital city. According to my guidebook this tiny nation, although still the largest of the three Baltic states, is a

“bastion of eccentricity and spirit”.

They are are not wrong there & it doesn’t take long walking the streets of Vilnius’s UNESCO listed Baroque Old Town to appreciate this. Yes, yet another UNESCO listed Old Town, the third I’ve found myself wandering around in as many days. 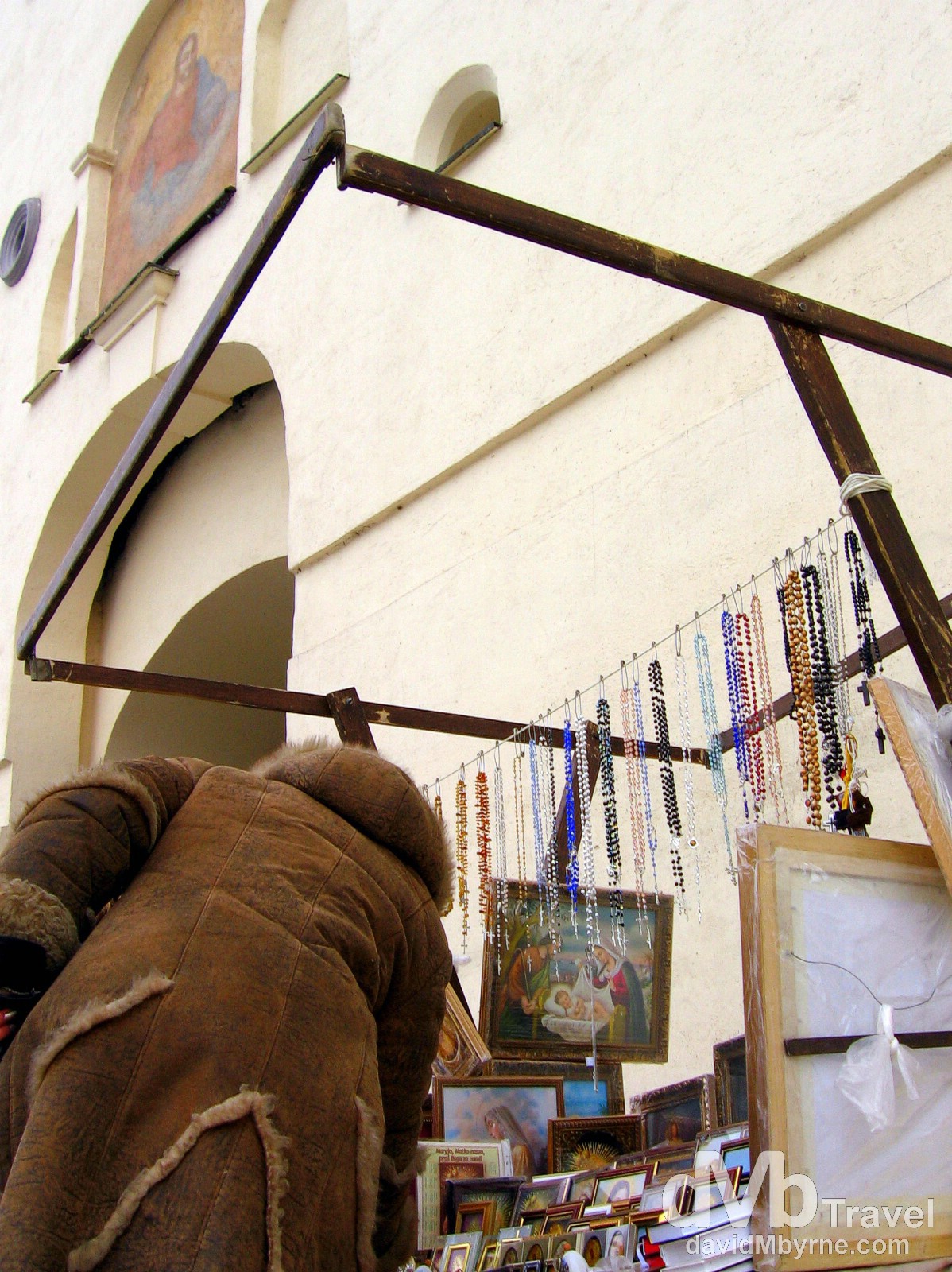 Rosary beads and other holy paraphernalia for sale at the Gates of Dawn, the only one of the Old Town wall’s original nine gate towers still intact. Vilnius (

There are not too many better places in the world to church hop – this city has more churches, of any denomination, than you can shake a crucifix at – and if you were to wander around town brandishing a crucifix you probably wouldn’t raise too many eyebrows. This is a picture of the external facades of the Church of the Holy Spirit (left), Lithuania’s chief Russian Orthodox church, and the Catholic Saint Teresa’s Church (right) from Austros Vartu gatve, the Old Town’s main drag & a street that was once start of the Moscow road. I was immediately struck by the congregation of elderly inside all the churches I visited in the city (& I visited quite a few on this day). It is easy to see why there is worry over dropping church attendance because, quite frankly, there doesn’t seem to be too many years left in most of the congregation attending mass in Vilnius. Old Town, Vilnius, Lithuania. March 4, 2006. 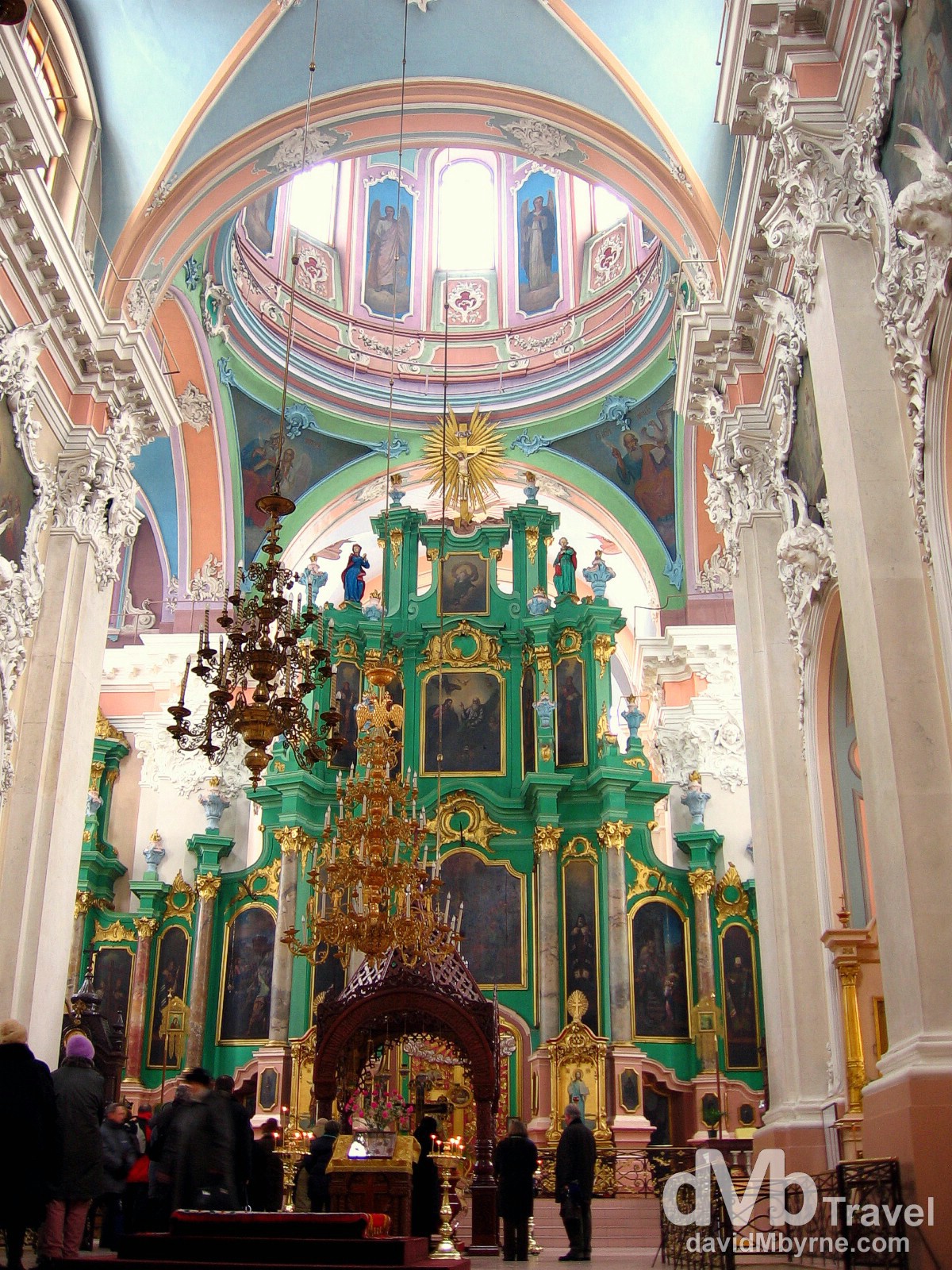 The exquisite detail & the multitude of colours inside the Baroque Church of the Holy Spirit, Lithuania’s chief Russian Orthodox church & parish church of the city’s Polish community. Built at the beginning of the 15th century, it was extended & partly reconstructed in 1679-1688 & today it is the parish church of the city’s Polish community. It’s interior, housing 16 different altars, is an abundance of decoration, lavishly styled by a profusion of Rococo faux marble, stucco, frescoes and 45 paintings, all considered to be monuments. The church’s crypt, with its nine side chambers, is crammed with about 2,000 mummified corpses, mostly from the 17th – 18th century, including, it is thought, bodies of plague victims and copses from the Napoleonic Wars. Vilnius, Lithuania. March 4th 2006

Lithuanian history mirrors that of the other two Baltic states of Estonia & Latvia. All three had sporadic independence up until 1940 when they became part of the USSR. They were subjected to Nazi oppression between 1941-1944, followed by decades of struggle for independence, a struggle Lithuania led on behalf of the Baltic nations – Lithuania was the first of the Baltic states to declare independence from the Soviets which it did on September 6, 1991. 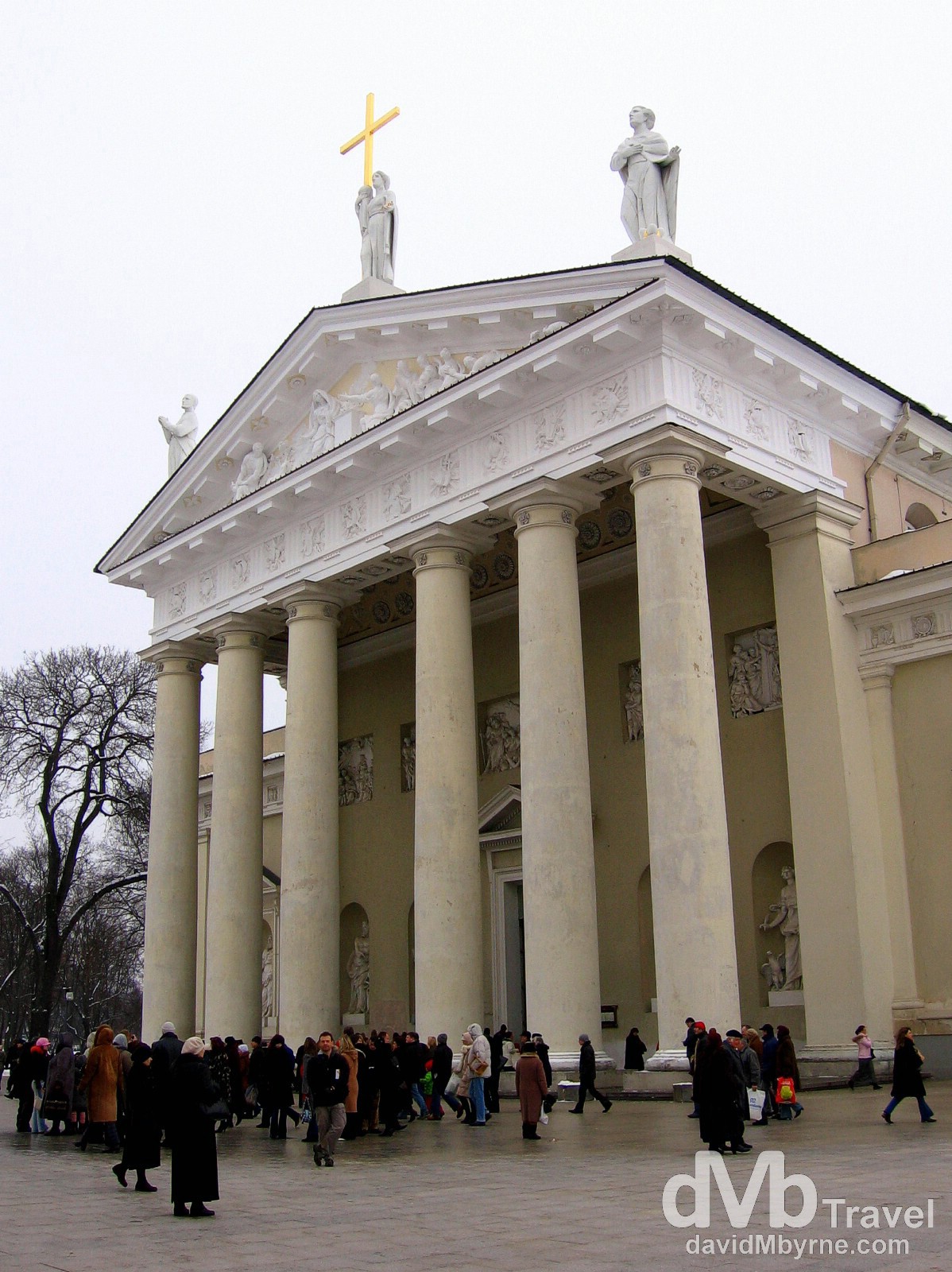 Crowds outside Vilnius Cathedral, the city’s blue-ribbon church. The structures massive 18th century facade is hard to miss & dominates Cathedral Square, the center of the city of Vilnius and the end point for the 1989 Tallinn to Vilnius human chain calling for Baltic State independence from the Soviets. Just like any other church in the city, Vilnius Cathedral suffered its fair share during the Soviet days having being used, among other things, as a gallery. Today it’s back to its old self and listening to the organs playing in the cathedral’s huge interior makes one feel oh so small. Cathedral Square, Vilnius, Lithuania. March 4, 2006. 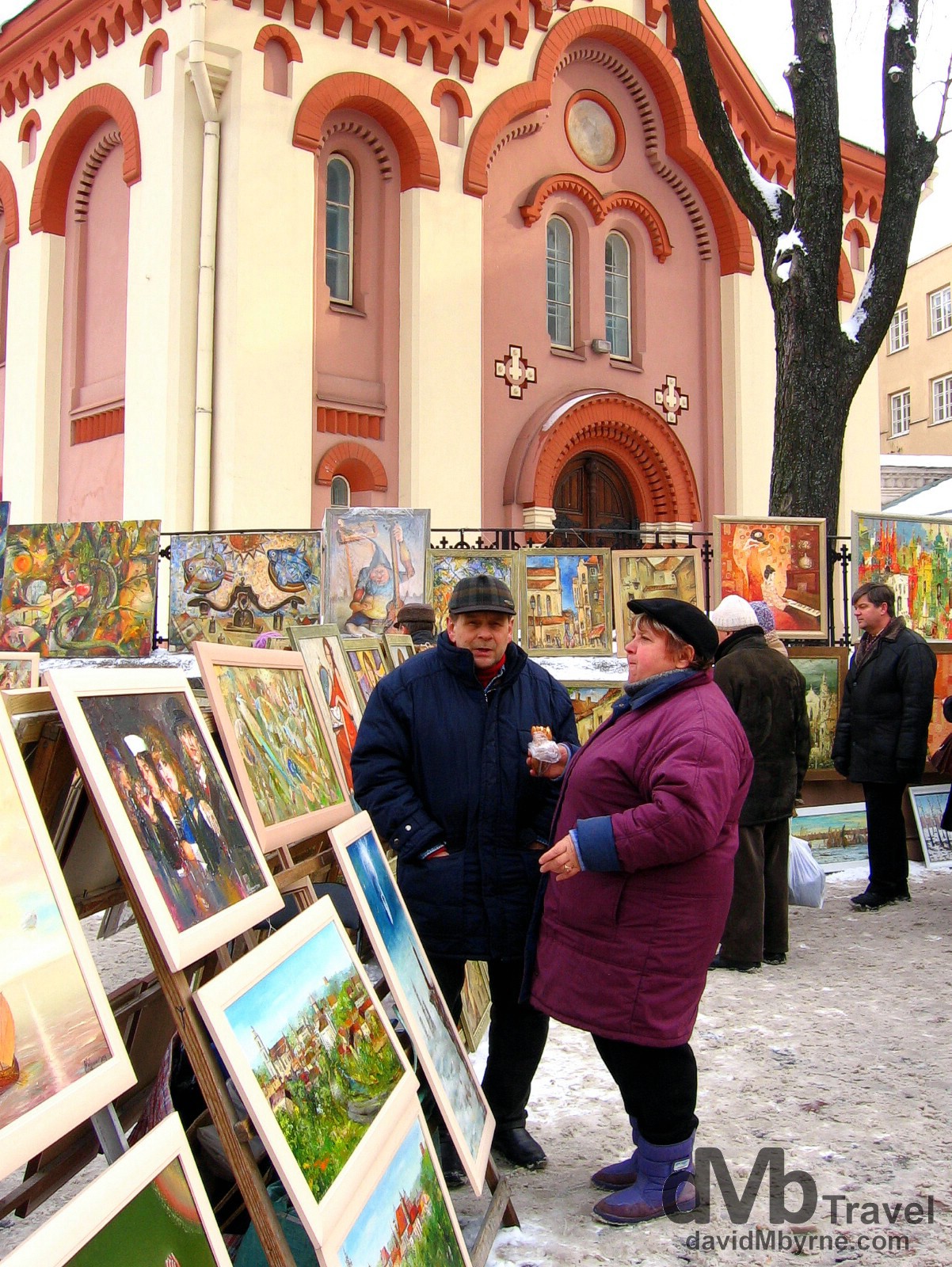 Today I found myself in Vilnius on the only day of the year that the city holds an outdoor arts and crafts fair, or so I was led to believe. Stalls lining the whole of Ausros Vartu gatve, Didzioji gatve and Pilies gatve, the three main city arteries that all lead to Cathedral Square in the heart of Vilnius. Most of the Old Town was abuzz with an especially bohemian, hippy feel to the place; very, very different to the atmosphere I experienced in Riga or Tallinn. All that coupled with the large congregations in every church I visited made today an exciting, vibrant day to be in an equally exciting & vibrant city. Vilnius, Lithuania. March 4, 2006. 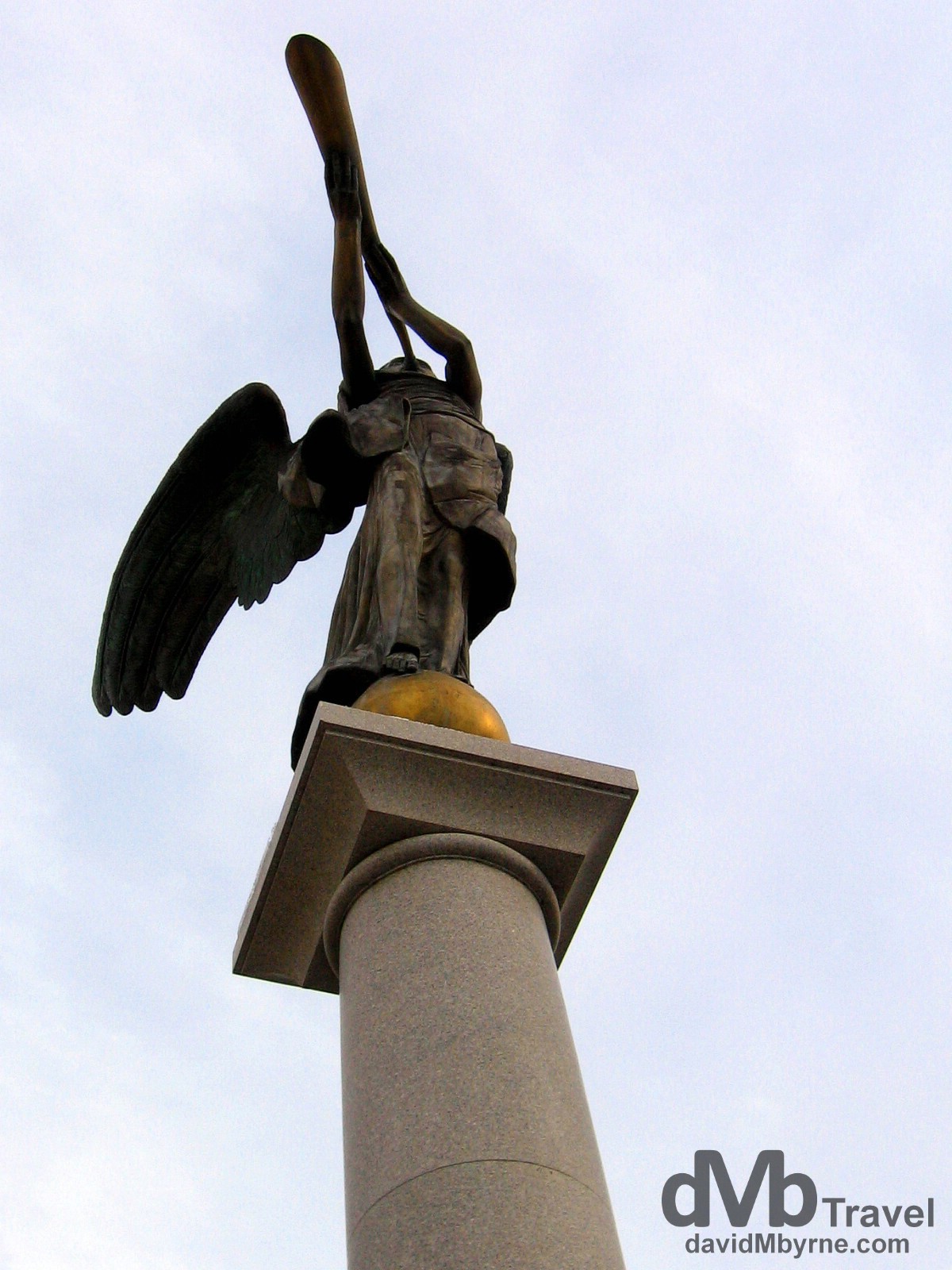 The Angel of Užupis statue in the breakaway Užupis neighborhood of Vilnius, Lithuania. March 4, 2006.