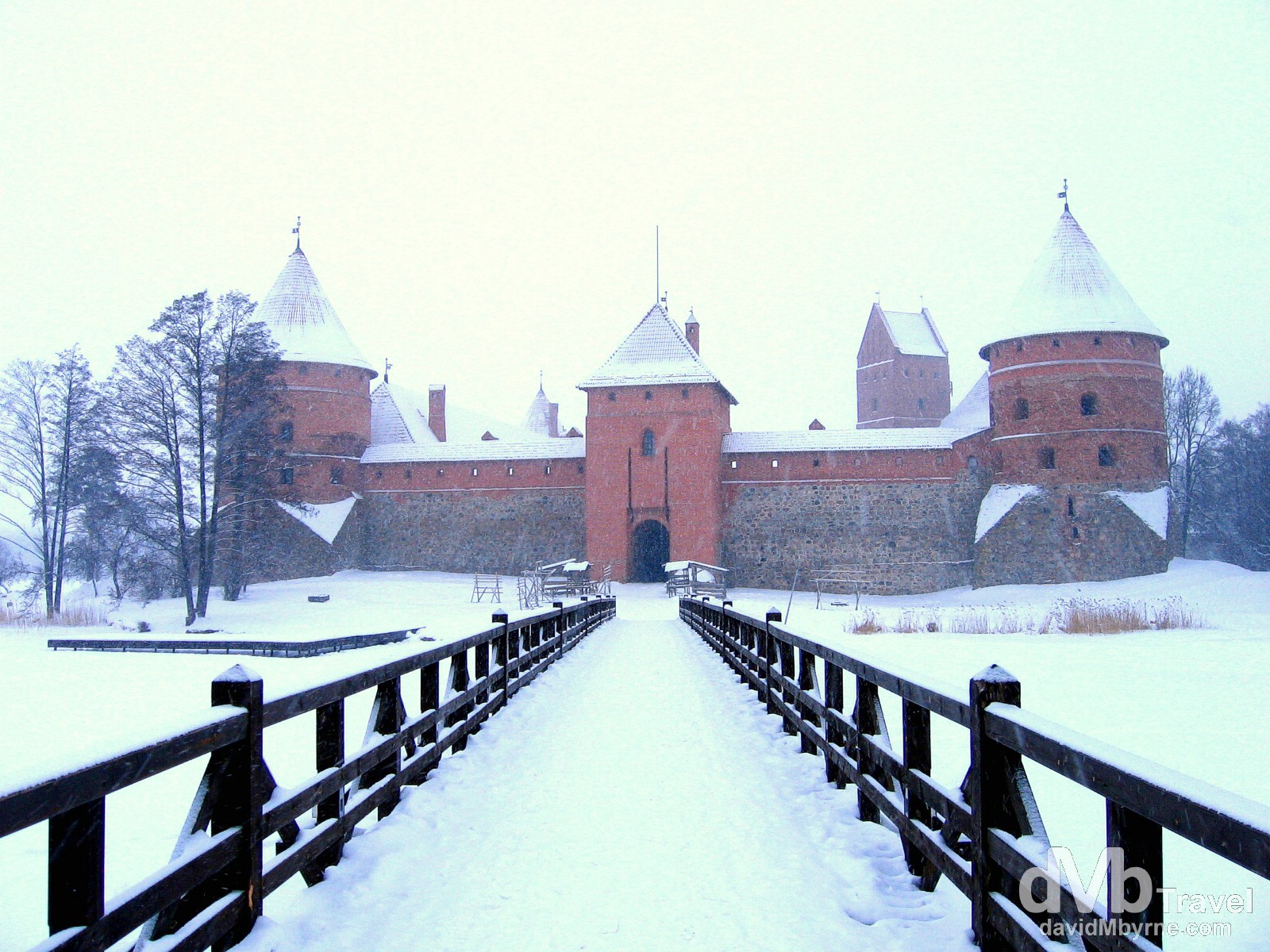 Twenty-eight kilometres west of the the Lithuanian capital of Vilnius is Trakai, the ancient capital of Lithuania and part of the present-day Trakai Historical National Park, the only historical national park in Europe. The park was founded in April 1991 to preserve Trakai as a centre of Lithuanian statehood. It contains numerous forests and almost 200 lakes. It’s also where you’ll find probably Lithuania’s biggest draw, and the primary reason I tramped out here from Vilnius, Trakai Castle, a 14th century red-brick castle sitting in the middle of Lake Galve.  A 14th century red-brick castle sitting in the centre of a lake in the middle of an historical National Park in what was once the capital of a once powerful empire. Wow. More people should know about places like this.

It was snowing heavily in Trakai when I disembarked the bus from Vilnius and it didn’t let up for the entire time I was here. It wasn’t easy finding a castle perched on an island in the middle of a frozen lake in the midst of a very heavy snow blizzard but eventually, & slowly, the castle reveled itself from the haze as I plodded my way across the surface of a frozen Lake Galve. The Castle itself dates from the 14th century having being built in several phases to fend off German Knights. It was destroyed in both the 17th and 18th centuries & was renovated to its present state in the early 1950s. Today, & thanks largely to its proximity to Vilnius, the castle is a big tourist draw, probably Lithuania’s biggest. Trakai Castle, Trakai ( 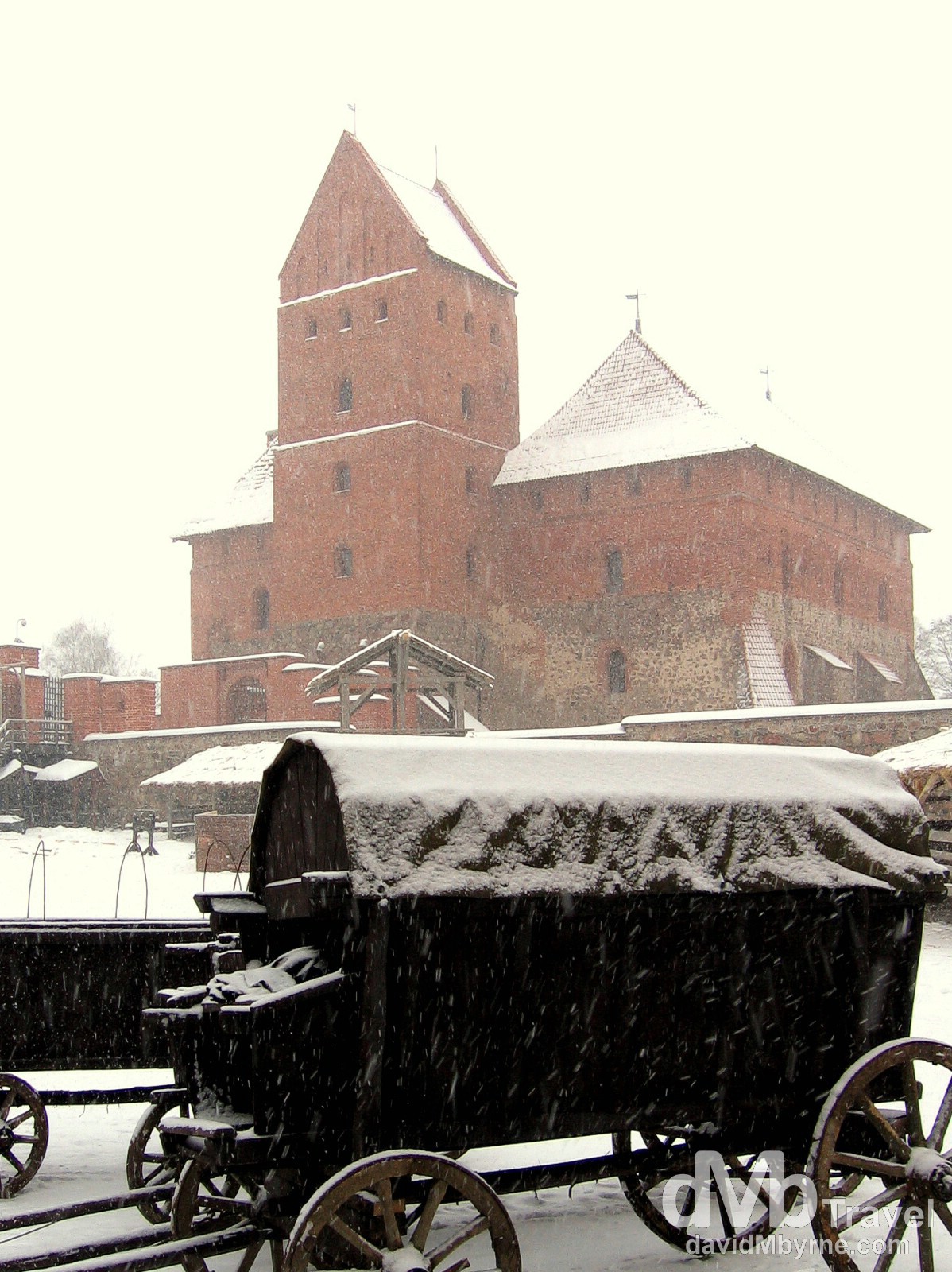 Although I found the castle itself closed (low season you see), I was still allowed to snap a few pictures in the courtyard area seen here before being evicted. Seemingly there is a museum in here somewhere that does a great job tracing the history of the castle. It would have been nice to see that if only to get some respite from the inclement weather. In the central courtyard of Trakai Castle during a heavy blizzard. Trakai, Lithuania. March 4, 2006. 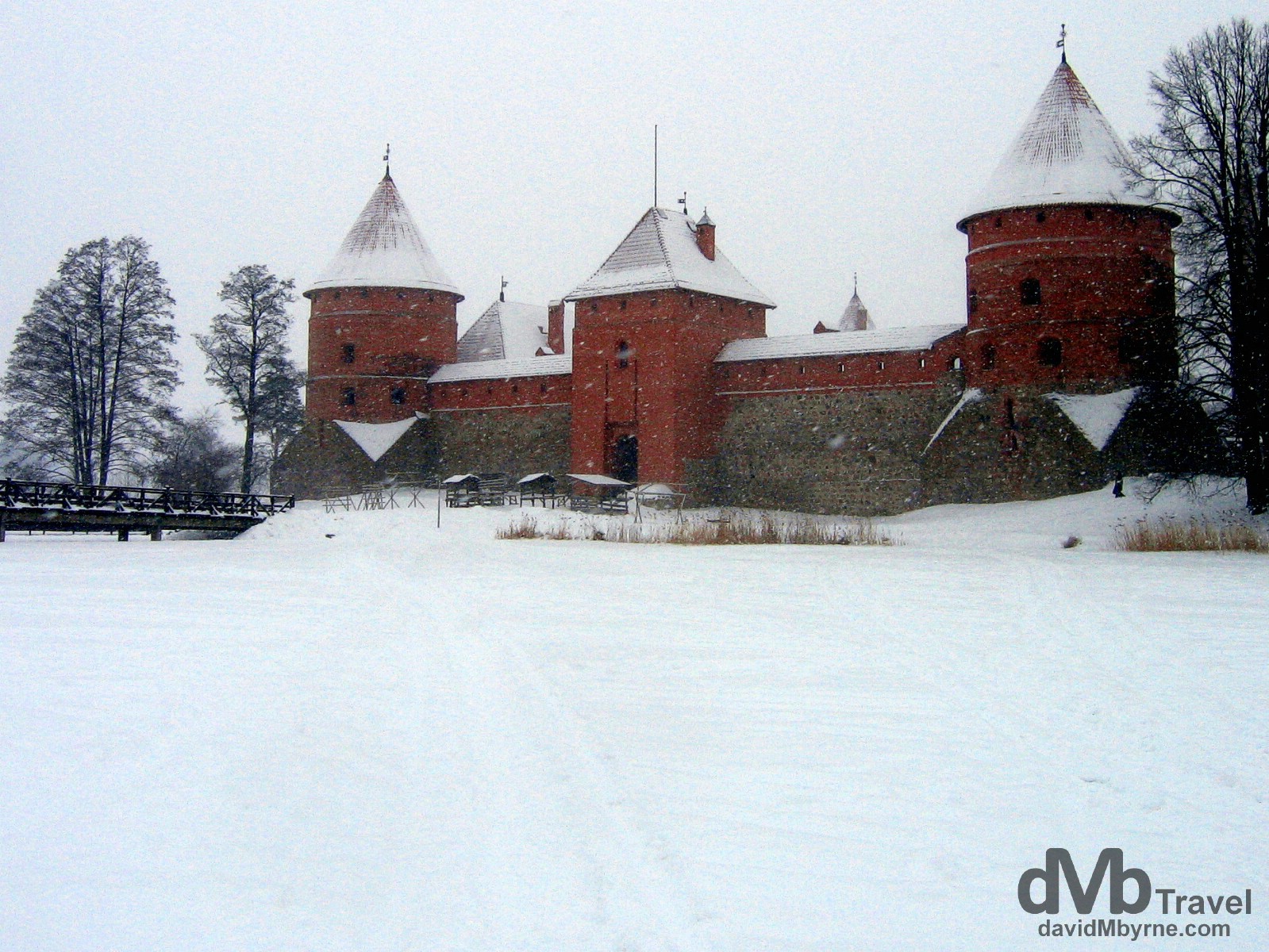 Trakai Castle, even a closed Trakai Castle, was amazing. But coldness eventually set in and things just stared to get miserable. So after sometime spent poking around the castle courtyard & its exterior walls it was time to leave. In doing so I decided to be a little less adventurous than when arriving at the castle by taking the bridge fronting it, the only access to the castle during the warmer summer months – in these conditions it was actually impossible to tell the castle was on an island. Trakai, Lithuania. March 4, 2006. 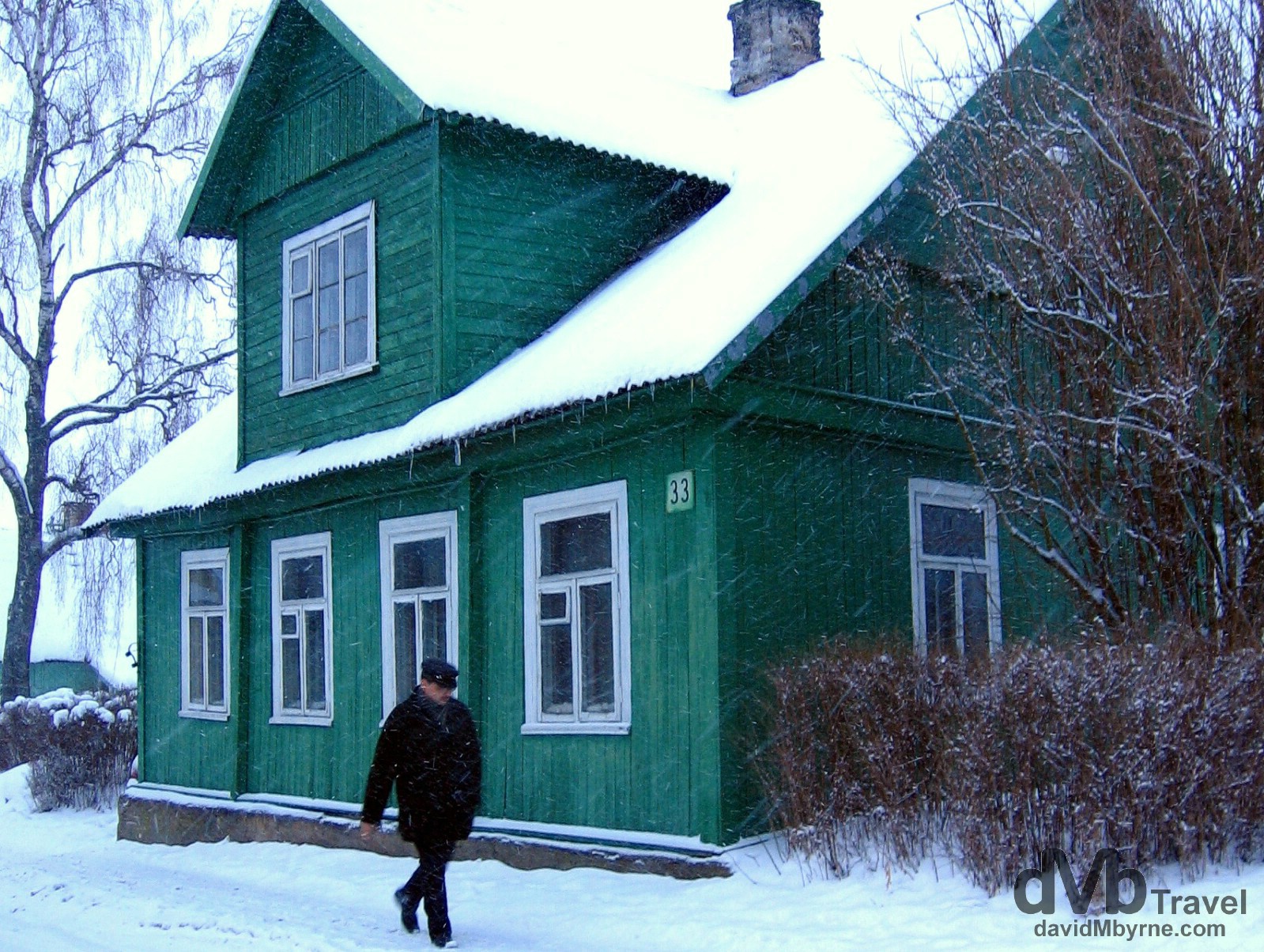 Trakai is a quiet place, especially so when it snows. It’s also somewhere that hides its historic past well. Very well. While once the centre of a large empire, today Trakai is nothing more than a sleepy one road village lined with wooden Karaim houses and churches. Which is good because it makes it hard to get lost, even in heavy snow blizzards. Trakai, Lithuania. March 4, 2006. 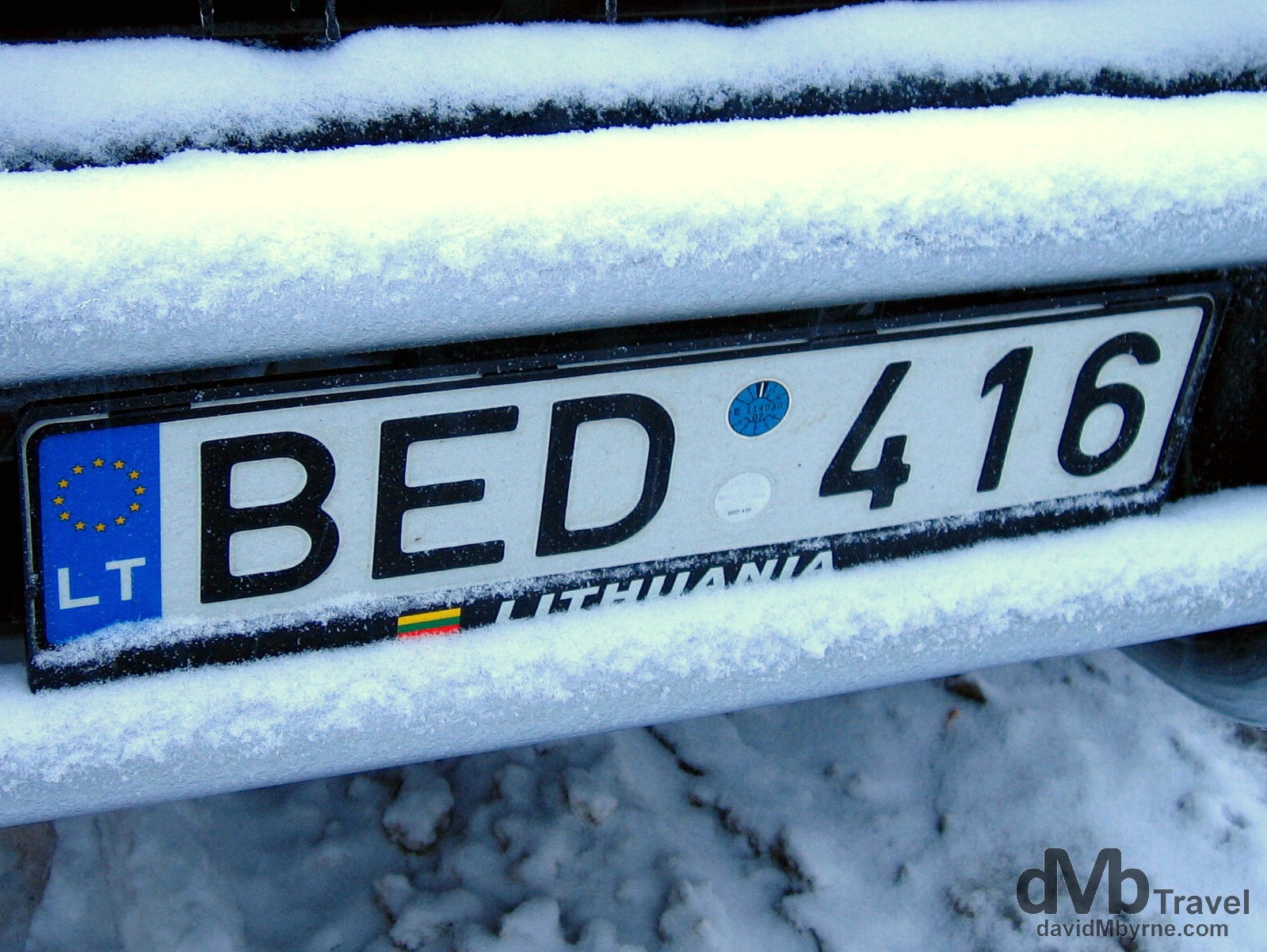 Captured in the bus station in Trakai while 1) fending off hypothermia, & 2) waiting for the bus back to Vilnius. Trakai, Lithuania. March 4, 2006.