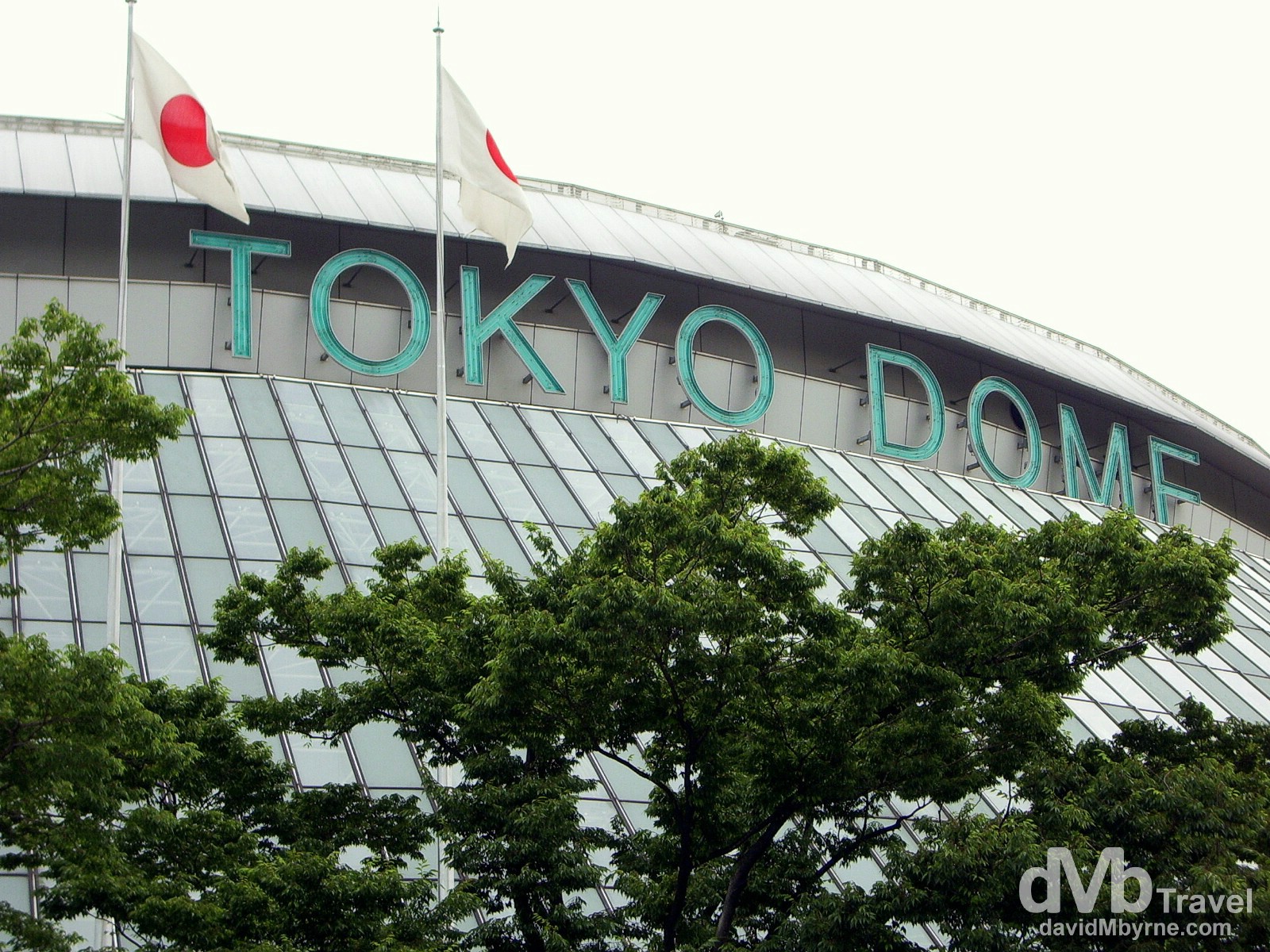 K onnichiwa from Tokyo, Japan, the capital, largest city and economic & cultural centre of the country. After a jarring flight from Dublin four days ago I quickly got energised & ready to go. And energy is what is needed for this city, especially in the summer heat. Needless to say Tokyo has all the stereotypical characteristics of any big Asian city of which Tokyo just happens to be the biggest – it is busy, is plagued by seemingly incessant noise, often clogged with bumper-to-bumper traffic and is packed with millions of people squashed into minute apartments. But it also has enough temples, backstreets and tranquil gardens with neatly clipped bonsai trees and carp fish ponds to help you escape the madness. 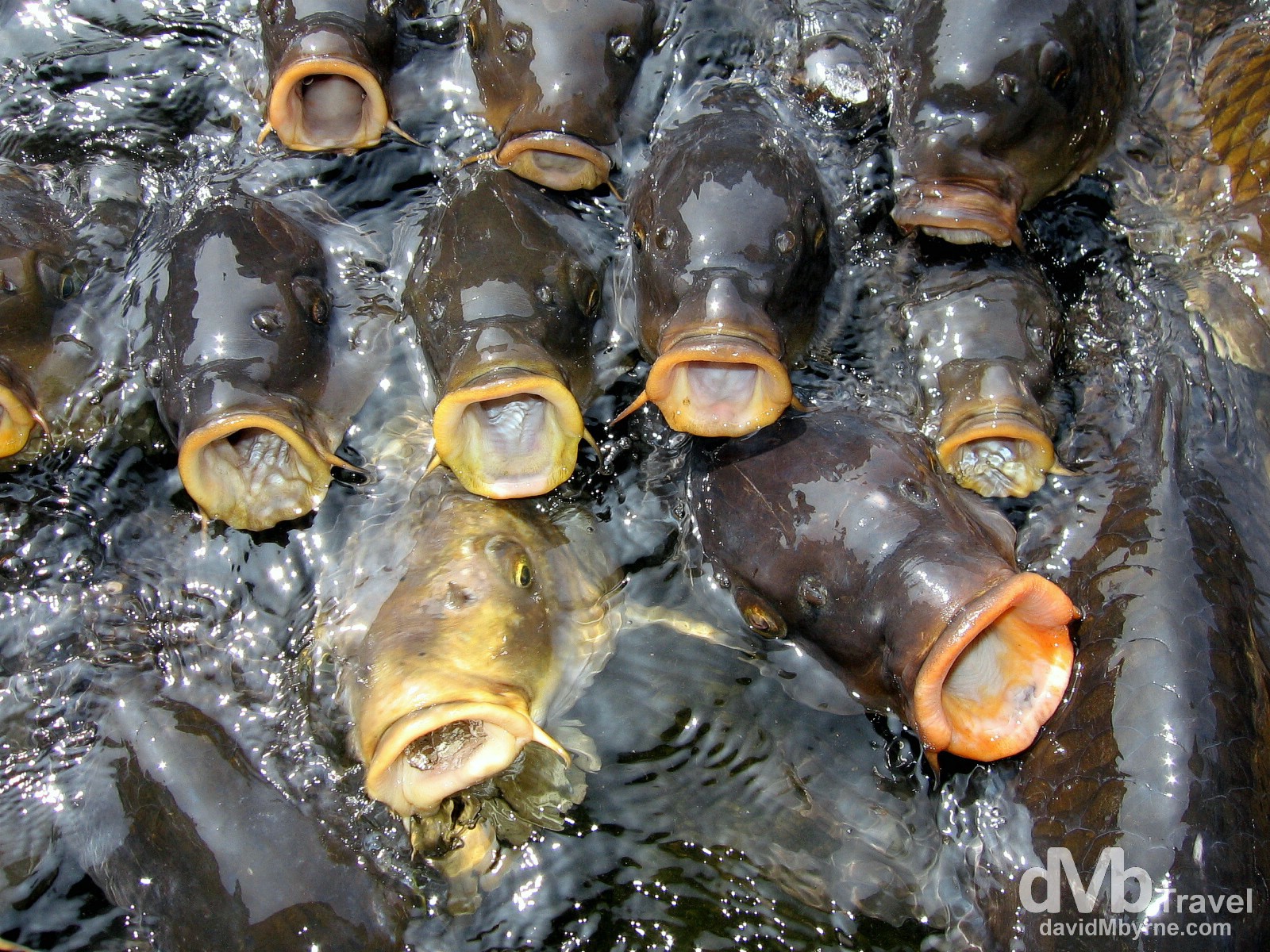 Hungry Japanese Carp in the pool of Happo-En Gardens, Tokyo (

Controlled Madness
In many ways Tokyo, the centre of the largest metropolitan area in the world with a population of over 32 million, is something of a modern-day Asian utopia. Trains run on time, the crime rate is hardly worth worrying about, shops and vending machines provide everything you could need (and many things you never thought you needed) 24 hours a day, people wear the coolest fashions, eat in fabulous restaurants and party in the hippest clubs.

First-time visitors should be prepared for a massive assault on the senses; just walking the streets of this hyperactive city can be an energizing experience. Expensive? Of course it is. It’s Japan. But I was surprised by how affordable many things are. Cheap and cheerful izakaya (bars that serve food) and noodle shacks far outnumber the swanky restaurants and many of the city’s highlights are even free: a stroll through the hyperactive, neon overloaded areas of Shibuya and Shinjuku; the Buddhist temple of Senso-ji & the Shinto Yasukuni Shrine; & a visit to a tranquil, wooded garden. Nope, you don’t need to part with lots of cash to explore this city, although the more you have the better.

A busy crossroads in the Shibuya shopping and entertainment district in the west of Tokyo, one of the busiest & most photographed pedestrian intersections in the world. Twenty-four hours day it’s vibrant, lively, fun, faddish, crowded, cramped and busy, and the streetwise love it. Shibuya is newer than its rival district of Shinjuku and has a cleaner, safer reputation. The district is a pop culture hotbed with several famous fashion department stores in the vicinity including Shibuya 109, seen in the distance. Shibuya 109 is a major shopping centre famous as the origin of the kogal subculture, a popular 1990s fashion craze that involved wearing an outfit based on a Japanese schoolgirl uniform. Alongside its huge department stores, Shibuya is also famous for the studios of NHK, the Olympic gymnasium, Love Hotel Hill and Hachiko, the tearjerking statue of a dog who even after his master had passed away would, night after night, year after year, wait by the subway station for his master to return. His master never did return and when Hachiko himself finally passed away on March 8, 1935, many a heart was touched. He was given a huge send off and his body now rests in the National Science Museum. Shibuya, Tokyo, Japan. July 14th, 2005

Here are a few more pictures from my time in Tokyo, interspersed by a few random observations I’ve made over the past few days of go, go, go in Tokyo. 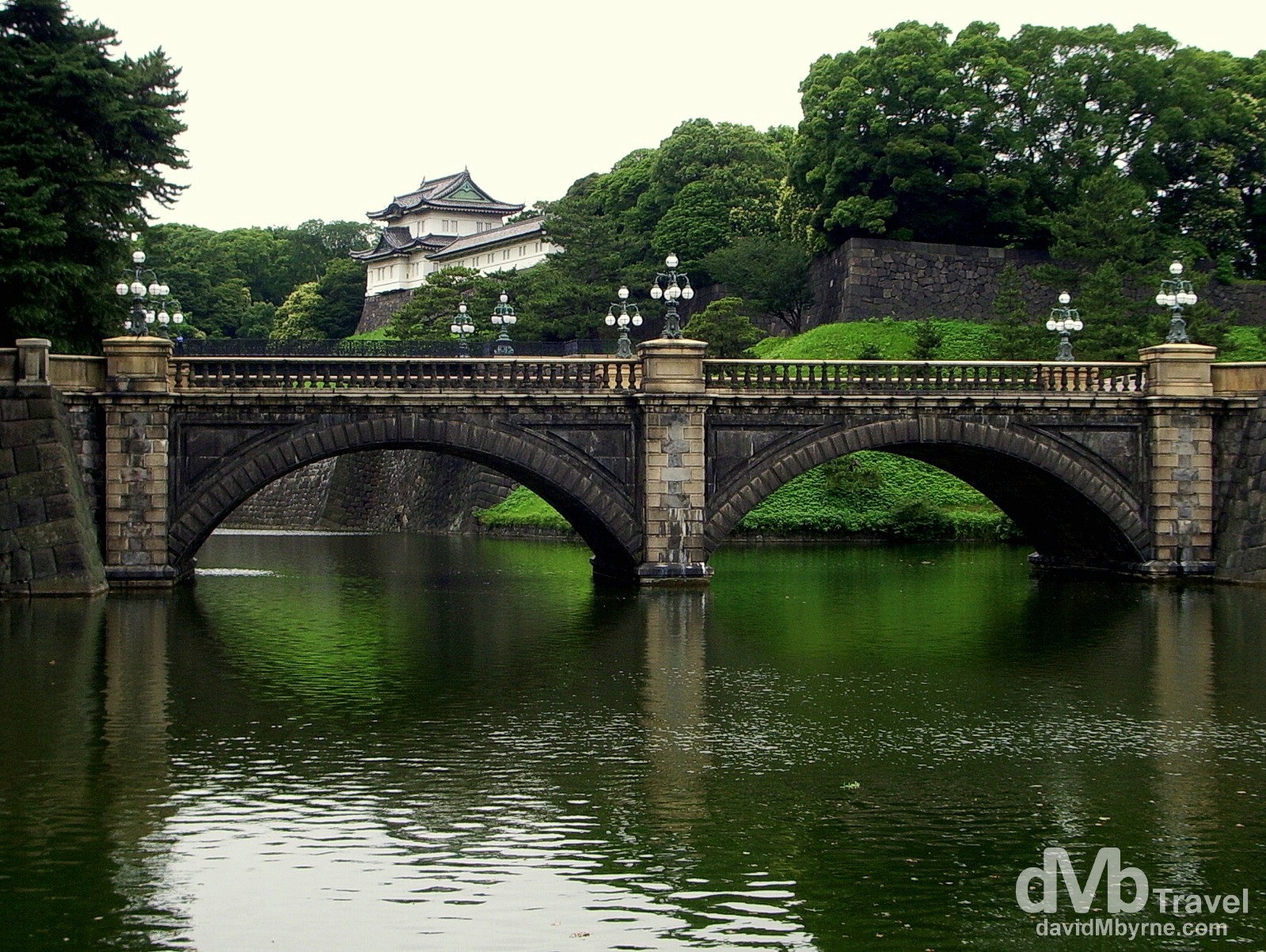 The Nijubashi Bridge of the Imperial Palace, the home of the Emperor of Japan, the Japanese head of state. It is surrounded by a moat and a high wall and occupies the most expensive square kilometre of land in the world. The Palace was destroyed by allied bombing during World War II and was rebuilt in the same style in 1968. The inner palace gardens (over the trees to the right of this picture) and buildings are closed to the public except on January 2 and December 23, when the imperial family makes a public appearance – foreigners can also apply online to join a guided tour at other times, but you must book well in advance. The Imperial Palace East Gardens, however, are open to the public daily except Mondays and Fridays. Kept in impeccable shape, the gardens are particularly beautiful during the March and April plum and cherry blossom seasons. This view of the Nijubashi Bridge is said to be the most photographed scene in Japan. Tokyo, Japan. July 13th, 2005.

Observation 2 || Convenience and efficiency are the Japanese buzz words. Convenience stores are legion as are vending machines. Find one that doesn’t work and I’d be shocked. Also, everything from restaurant service to the aforementioned army of ever-present vending machine is frightfully efficient; all forms of transport run with military precision and on time. 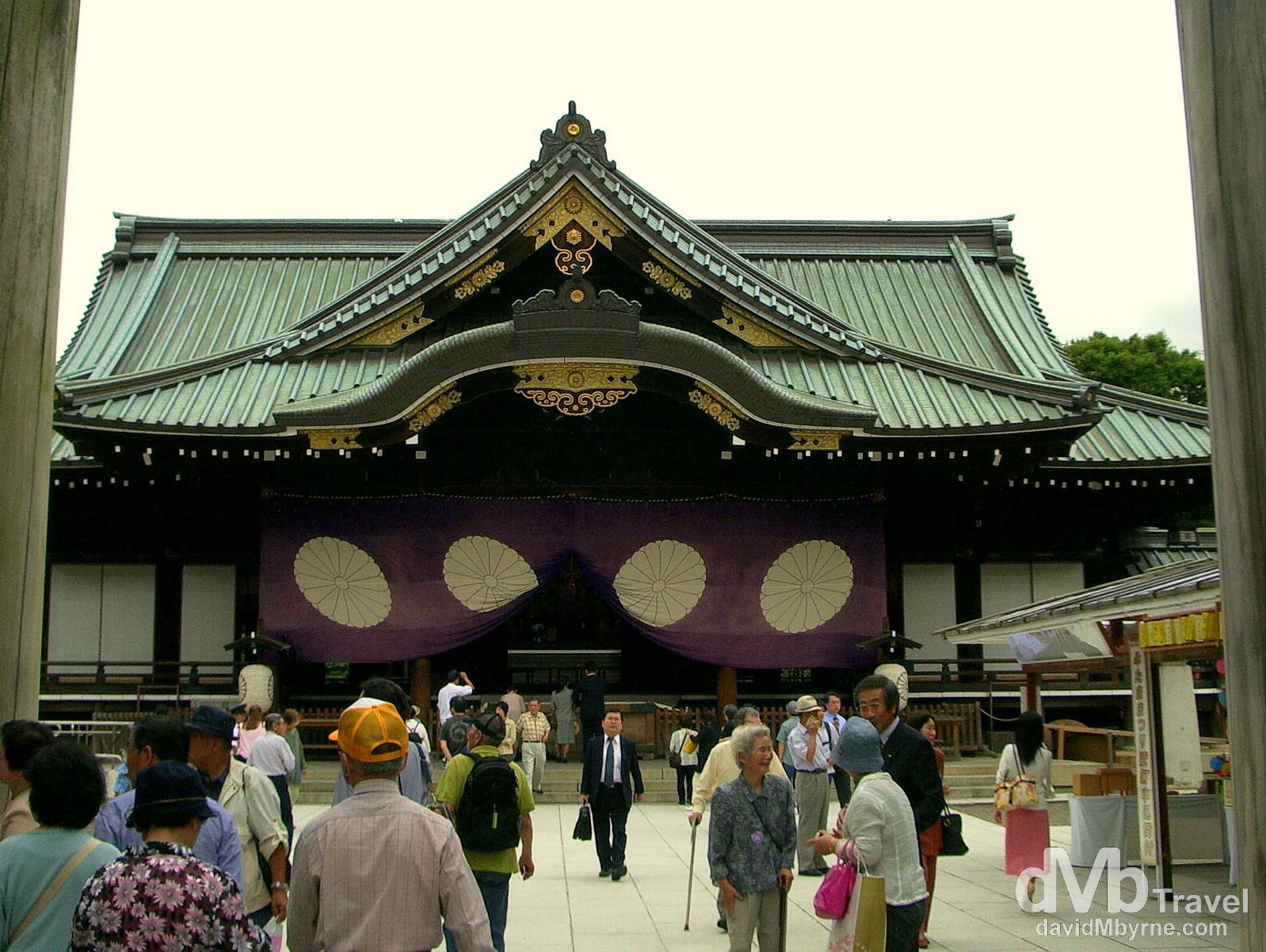 The Shinto Yasukuni Shrine. The shrine is a constant source of controversy for the Japanese government because included in the Book of Souls are 1,068 people convicted of war crimes by a post World War II court, including a total of 12 convicted Class A war criminals. The shrine’s history museum contains an account of Japan’s actions in World War II, which is considered revisionist by some. Visits to the shrine by cabinet members, including Prime Ministers, have been a cause of protest at home and abroad, especially in the countries who suffered most at the hand of World War II Japan – China, North & South Korea and Taiwan. Yasukuni Shrine, Tokyo, Japan. July 13th 2005.

Observation 3 || Bowing is contagious. Even as a clueless foreigner you will find yourself bowing when interacting with the Japanese. Even when buying everyday items in a corner store. No need to over do it however. Just a gentle nod of the head is fine.

The Tokyo Dome is part of the Tokyo Dome city, a leisure complex in central Tokyo consisting of the Tokyo Dome baseball stadium, an amusement park, the Laqua spa, a variety of shops and restaurants and Tokyo Dome Hotel. The dome itself has seating for 55,000 and it is the home stadium of the Yomiuri Giants and Nippon Ham, two professional baseball teams. Concerts, festivals and other events are held in the stadium when there are no games. Nicknamed Big Egg, it was completed in 1988 and replaced the former Korakuen Stadium. Tokyo Dome, Tokyo, Japan. July 13th, 2005.

Observation 4 || Forget the temples, the Tokyo Dome, or even the Palace. The number one tourist activity in Tokyo? People watching. Street level Tokyo is an assault on all senses.

Observation 5 ||The navy business suit rules. 90% of men on the move have a briefcase of some sort, a dark navy suit, a white shirt and a God-awful boring tie. 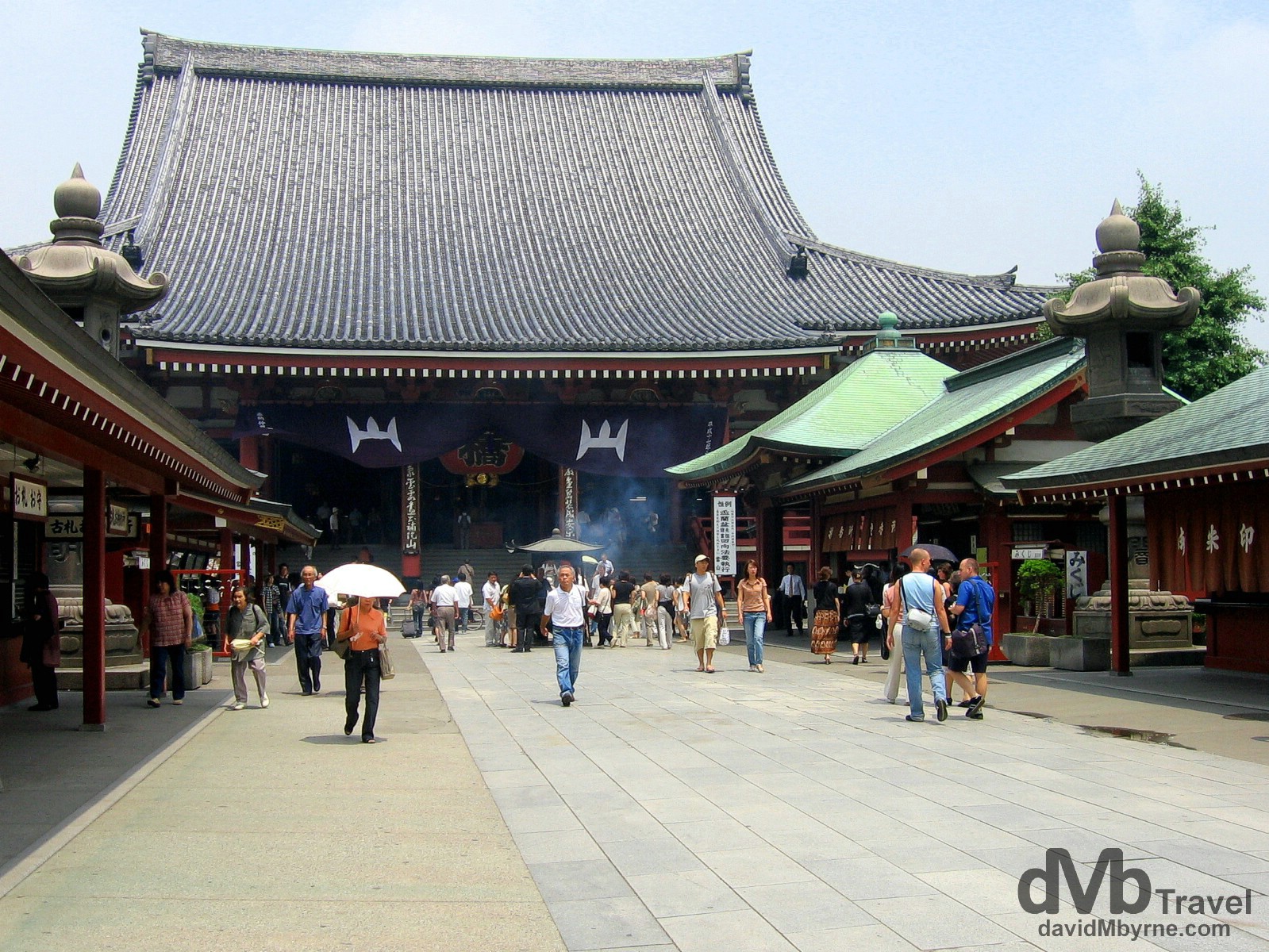 Tokyo’s most revered temple, the Senso-ji Temple, was founded in AD 628 to enshrine a gold statuette of the Kannon Bodhisattva (the Goddess of Mercy) which, according to legend, was found by two local fishermen. Also known as Asakusa Kannon in Japan, the temple and its five-storey pagoda may today be a post-war concrete reconstruction but nonetheless its precincts are always bustling with worshippers crowding around the huge incense burners that are said to have healing powers. Senso Ji Temple Complex, Tokyo, Japan. July 15th, 2005.

Observation 6 ||Jaywalking must be a hanging offence. Everyone crosses the roads at designated places and times. Yep, there may be no traffic to be seen (unlikely) and the road in question might only be a small, narrow lane but it will have a pedestrian traffic light and nobody dares to cross without the safety of the little green man holding their hand. In sure a busy, hyperactive city that struck me as somewhat bizarre.

Observation 7 ||I was surprised to learn that English is not widely spoken. But like anywhere with a language barrier all you need to get by is the universal language of a smile and plenty of patience. 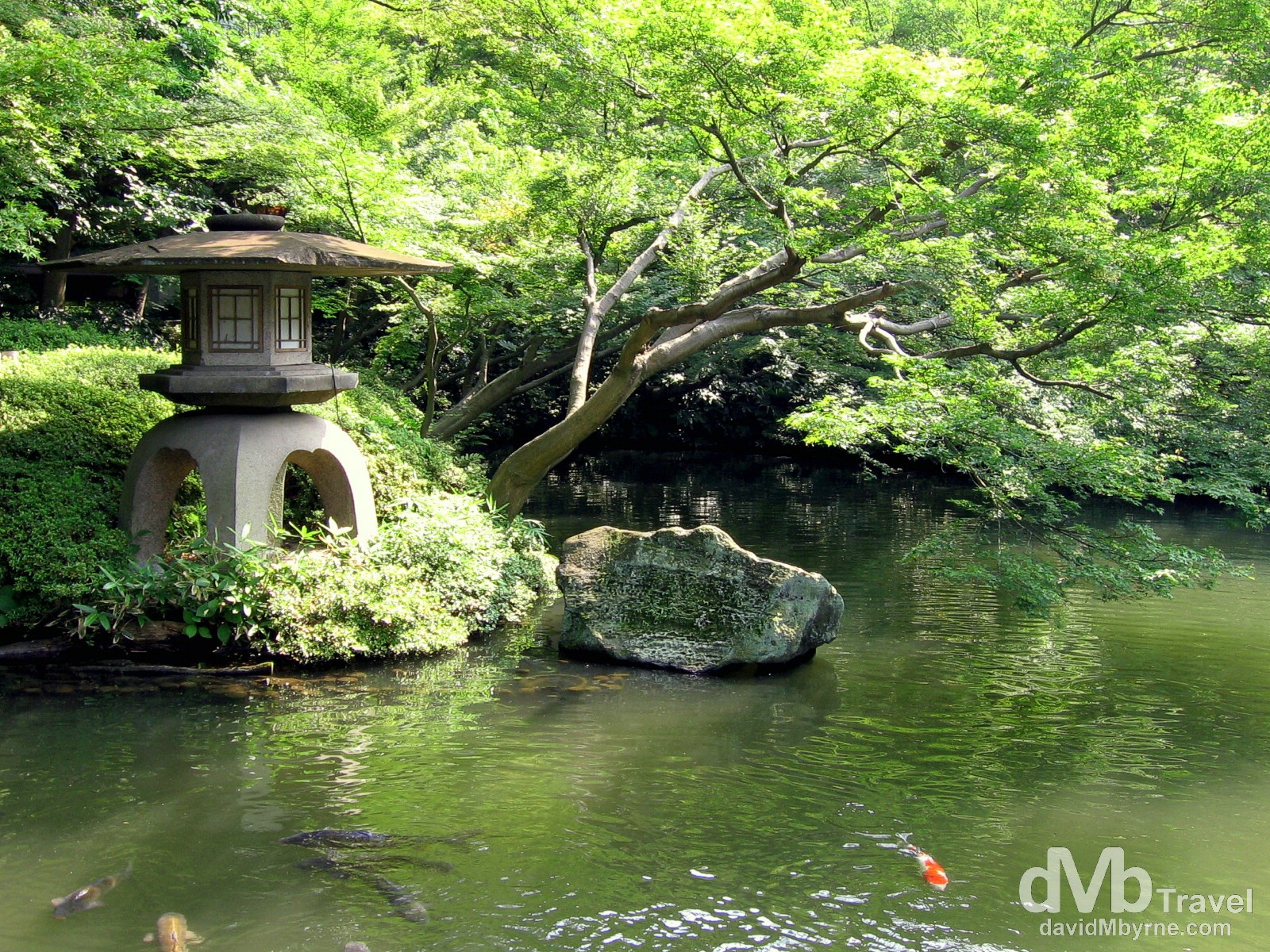 Japanese gardens, like Tokyo’s small Happo-En Gardens, developed out of the sacred grounds surrounding Shinto shrines and imperial palaces. The earliest gardens, dating from the 8th 12th centuries, took the form of a pond and island representing the mythical land of the gods, Tokoyo. Both the turtle and crane, animals alluding to the Chinese isle of the immortals and symbolizing longevity, were associated with Tokoyo and appear frequently in garden design, usually in the form of islands or rock groupings. Later the rocks, carp filed ponds and islands largely lost their religious symbolism, but were used instead to evoke famous Japanese beauty spots or scenes from literary masterpieces. It took a bit of finding but it was worth it. I sat by this pool for a while trying to cool down recuperating and escaping the heat of the sunlight. Although I saw the sign outside the garden upon entering I didn’t read until leaving the bit that said the garden is only open to paying guests of the nearby function hall and wedding reception. Happo-En Gardens, Tokyo, Japan. July 15th, 2005.

Observation 8 || The Japanese are a clean race and people seem to make great efforts at looking their best all the time, wacky fashions aside. People in the shops buying milk were impeccably dressed and women on the subway will spend an age looking in their personal mirrors doing their makeup and tending to whatever imperfections they might see on their face. At home we call that being vain but over here it’s par for the course. And as for litter. In such a busy place litter is unheard of and you’ll be doing well to find a public bin.

Observation 9 || When you walk into a restaurant all members of staff, including the kitchen staff, will greet you, in sync, with a chorus of Japanese. 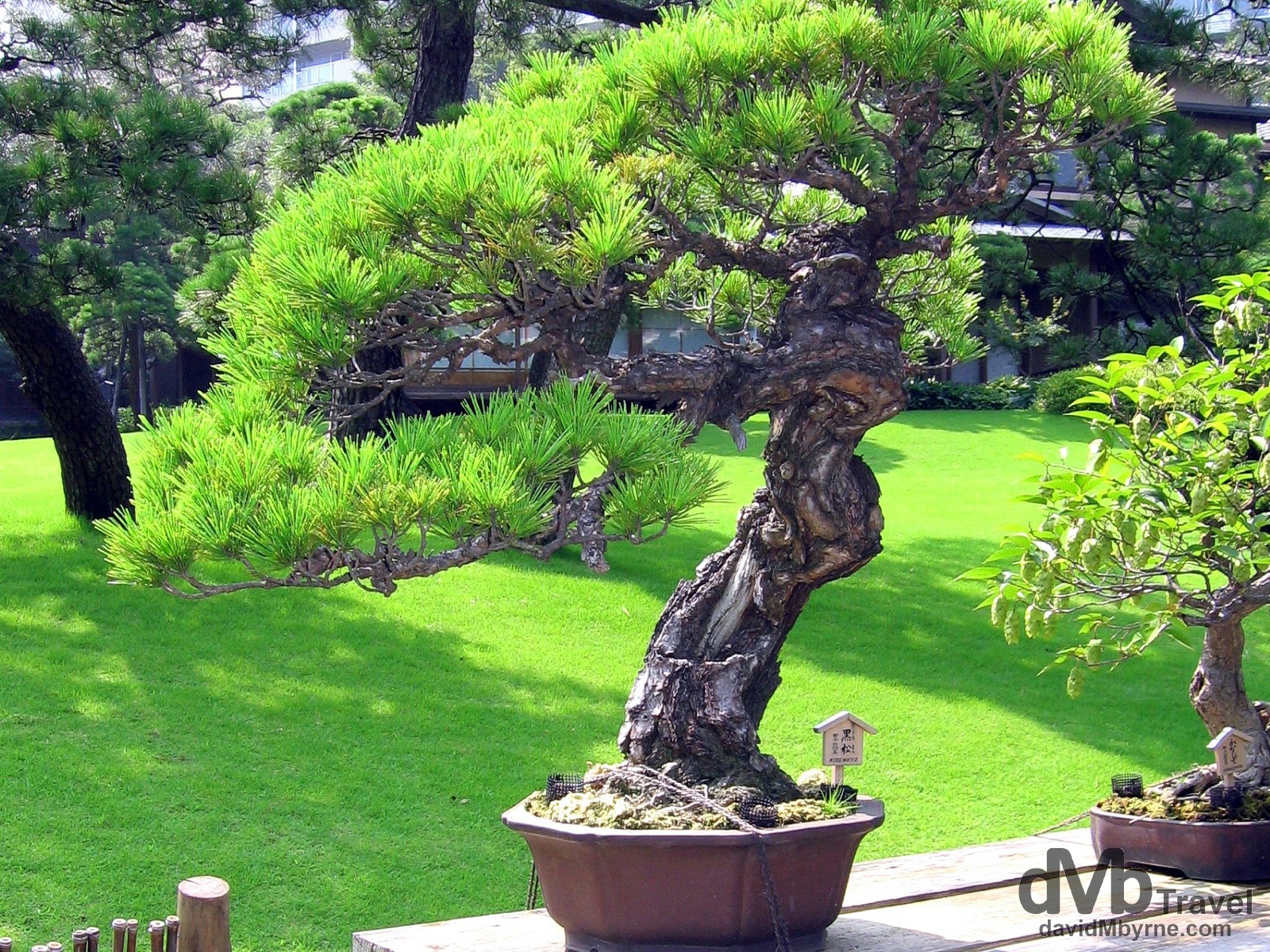 A bonsai tree in Happo-En Gardens. Bonsai is the art of aesthetic miniaturization of trees by growing them in containers and while few objects say Japan more than a bonsai tree I was surprised to learn that they actually originated in China. I was also interested to learn that a bonsai is not a genetically dwarfed plant; it is actively grown but kept small through a combination of pot confinement, and crown and root pruning. And while any tree or shrub with the right training and care could become a bonsai with time, some plants are more sought-after for use as bonsai material because they have several characteristics that make them appropriate for the smaller design arrangements of bonsai. Happo-En Gardens, Tokyo, Japan. July 15th 2005.

Observation 10 || Even at the cheaper end of the scale the accommodation standards in Japan are high. Very high. And if like me you’re on a budget you’ll probably be staying in Roykan, a traditional Japanese style inn which comes complete with Japanese style clothing, bathing facilities and meals. It’s a great way to feel all Japanese and to get the most out of your trip.

Observation 11 || The Japanese have a love affair with Hawaii. There are shops selling all things Hawaiian (t-shirts, mugs etc). I had noticed the large numbers of Japanese tourists on the streets of Waikiki when I visited there some years ago. I find the love affair sort of ironic considering the warring past.