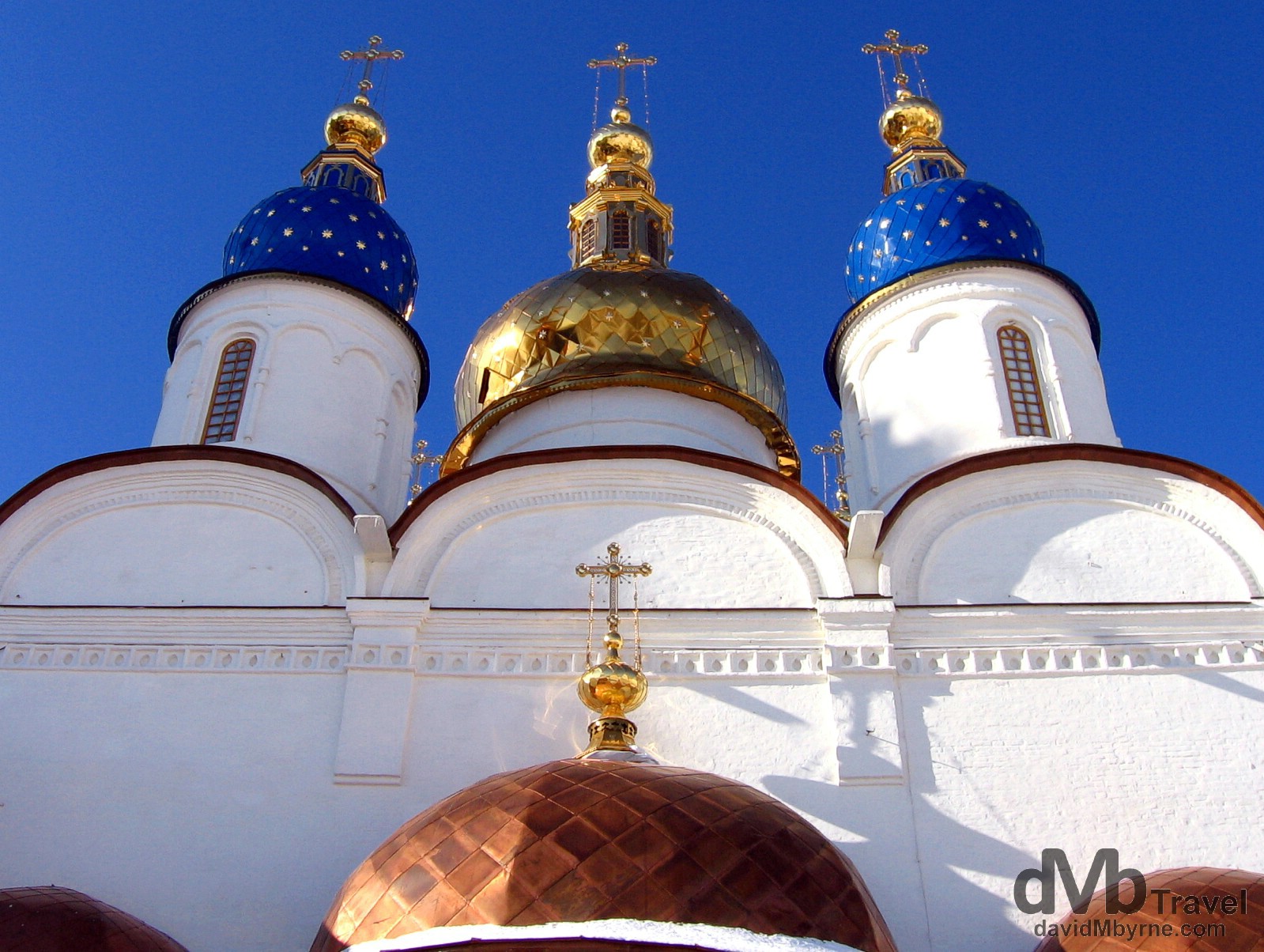 I disembarked the eastbound train from Irkutsk in Tyumen, about a 2-day, 1,800-kilometre train ride shy of Moscow. I got off there as Tyumen, the administrative capital of the Tyumen Oblast (province), is the nearest rail stop to Tobolsk, a 4 hour bus ride north. Why? Because I had read that Tobolsk’s old kremlin was one of the best in Russia and worth a visit in you happen to be in the region. I was (in the region) so I did (pay it a visit). It was awesome.

St Sofia’s Cathedral in the grounds of the Tobolsk Kremlin. I had the whole Kremlin complex to myself; there was positively no one else around save for a few workers restoring another nearby chapel. They had obviously only recently finished working on St Sofia’s cathedral because it looked amazing – the sight of the blue & gold onion domes basking in the glorious sunshine against the crystal clear blue sky made for an amazing sight and made the effort to get here to Tobolsk worth it. Tobolsk (

Kremlin is the Russian word for fortress, citadel, or castle. The word is used to refer to any major fortified central complex found in historical Russian cities but is commonly associated with the best-know of all the Russian Kremlins, the Moscow Kremlin.

The Creme de la Kremlin
Tobolsk is the only town in Siberia, and one of only a few in Russia, which has a standing stone Kremlin. Built at the turn of the 17th and 18th centuries & proclaimed a national historical and architectural treasure in 1870, its white walls and towers with an ensemble of churches and palatial buildings are spectacularly sited on a high river bank overlooking the Old Town of Tobolsk. The principal monuments in the Kremlin are the Cathedral of St. Sophia (1683-1686), a merchant courtyard (1703-1705), an Episcopal Palace (1773-1775), and the so-called Swedish Chamber with six baroque halls (1713-1716), all of which I had free reign of today. 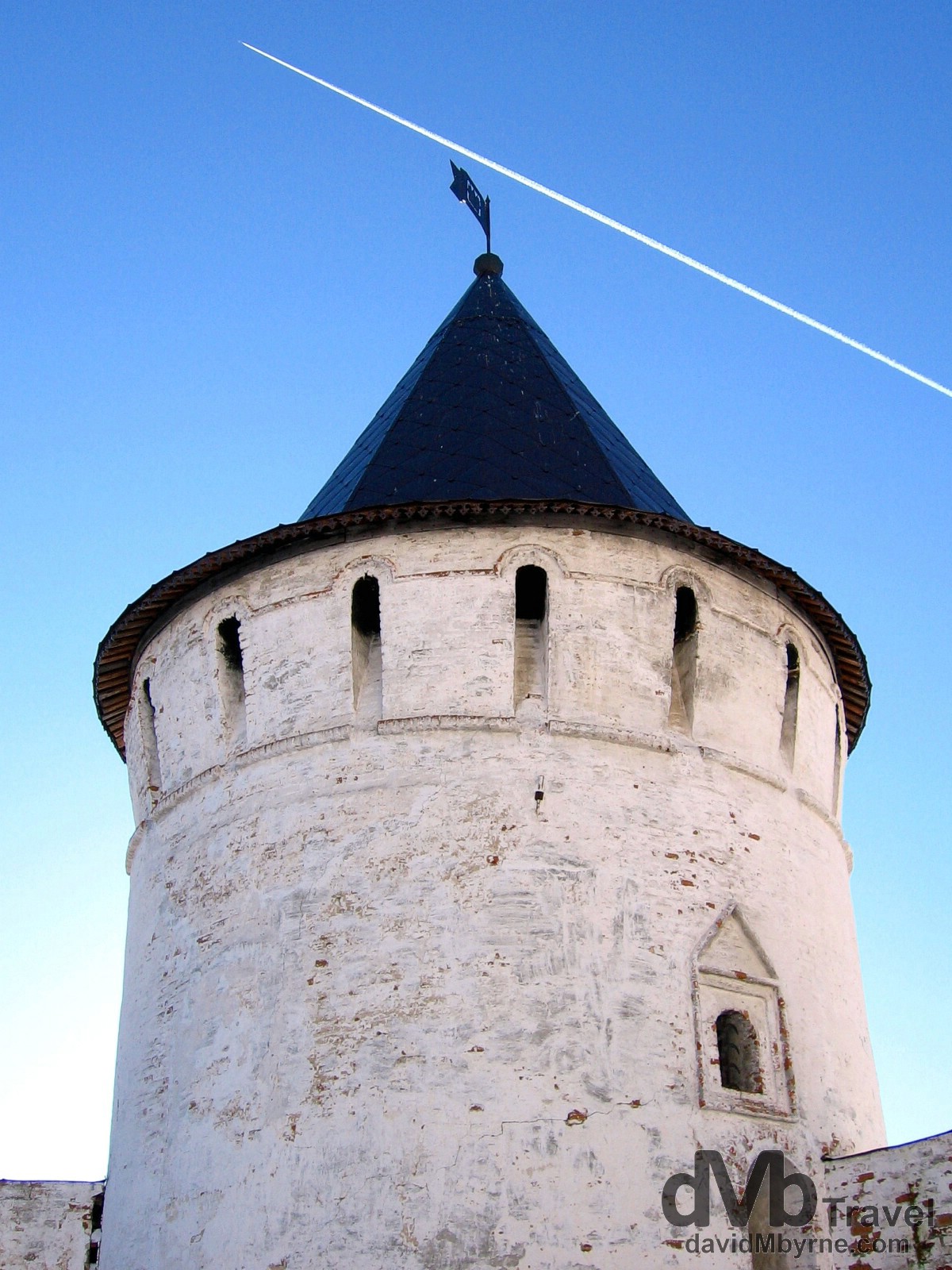 A tower of the walls of the the Kremlin in Tobolsk, Siberian Russia. February 22nd, 2006.

Russia – a country in which things that just don’t happen happen.

Historic Tobolsk
Tobolsk is historically one of the most famous towns in Siberia, hence the reason it has one of the country’s best Kremlins. A river town full of whitewashed churches and log buildings, it was founded by Yermak’s Cossacks in 1585-1586 during the first Russian advance into Siberia. Once the historic capital of Siberia, it was here that Siberia’s first school, theatre, and newspaper were established. The city’s importance declined when the Trans-Siberian Railway bypassed it in the 1890s and now, alas, it’s just an ordinary town in the Tyumen Oblast (province). In August 1917 Russia’s last Tsar, Nicholas II of Russia, and his family were brought here to live in relative luxury in the former house of the Governor-General before being moved to Yekaterinburg where they were murdered by the communists, thus ending the imperial Russian Romanov dynasty. 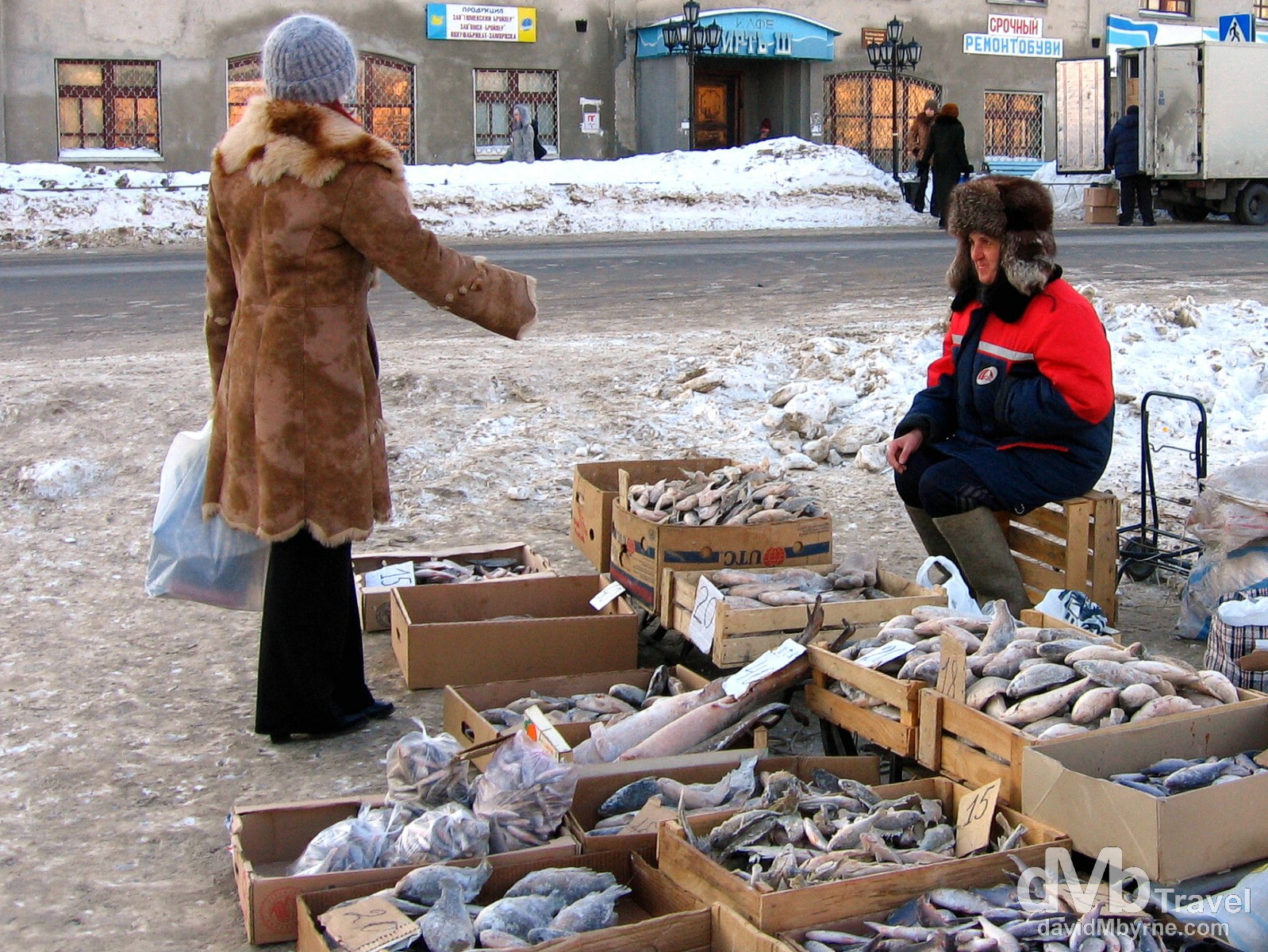 Having looked around the Tobolsk Kremlin, I ventured into the Tobolsk Old Town area and stumbled across a market hidden in a nondescript looking building. The find was well received as it provided me with a chance to warm up and sit for a while as I waited for the hours to pass before my latest overnight train trip westward to Yekaterinburg. This is a picture of fish for sale outside the Old Town Market. No further refrigeration needed. Old Town, Tobolsk, Siberian Russia. February 22, 2006. 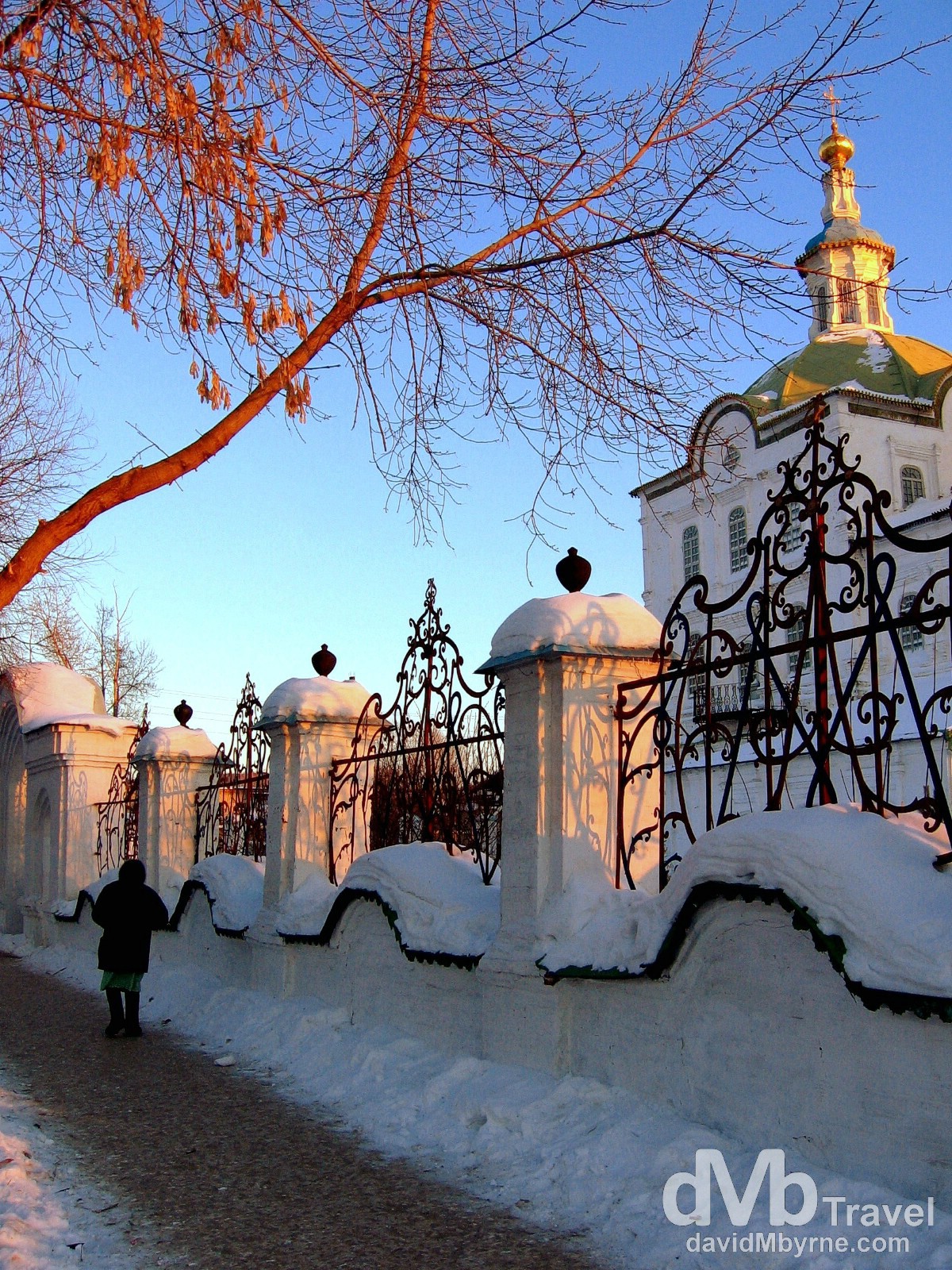 Tobolsk doesn’t only boast a glorious Kremlin. Situated on the valley plain below the Kremlin, Tobolsk’s Old Town contains some remarkable baroque & neoclassical churches dating from the 18th and 19th centuries. One of these is the Mikhail Arkhangel Church, seen here at the golden hour this evening – and what a golden hour it was. The church, & like most Tobolsk Old Town buildings, is suffering from the same neglect afflicting the wooden buildings in the streets surrounding it. Mikhail Arkhangel Church, Old Town Tobolsk, Siberian Russia. February 22, 2006.