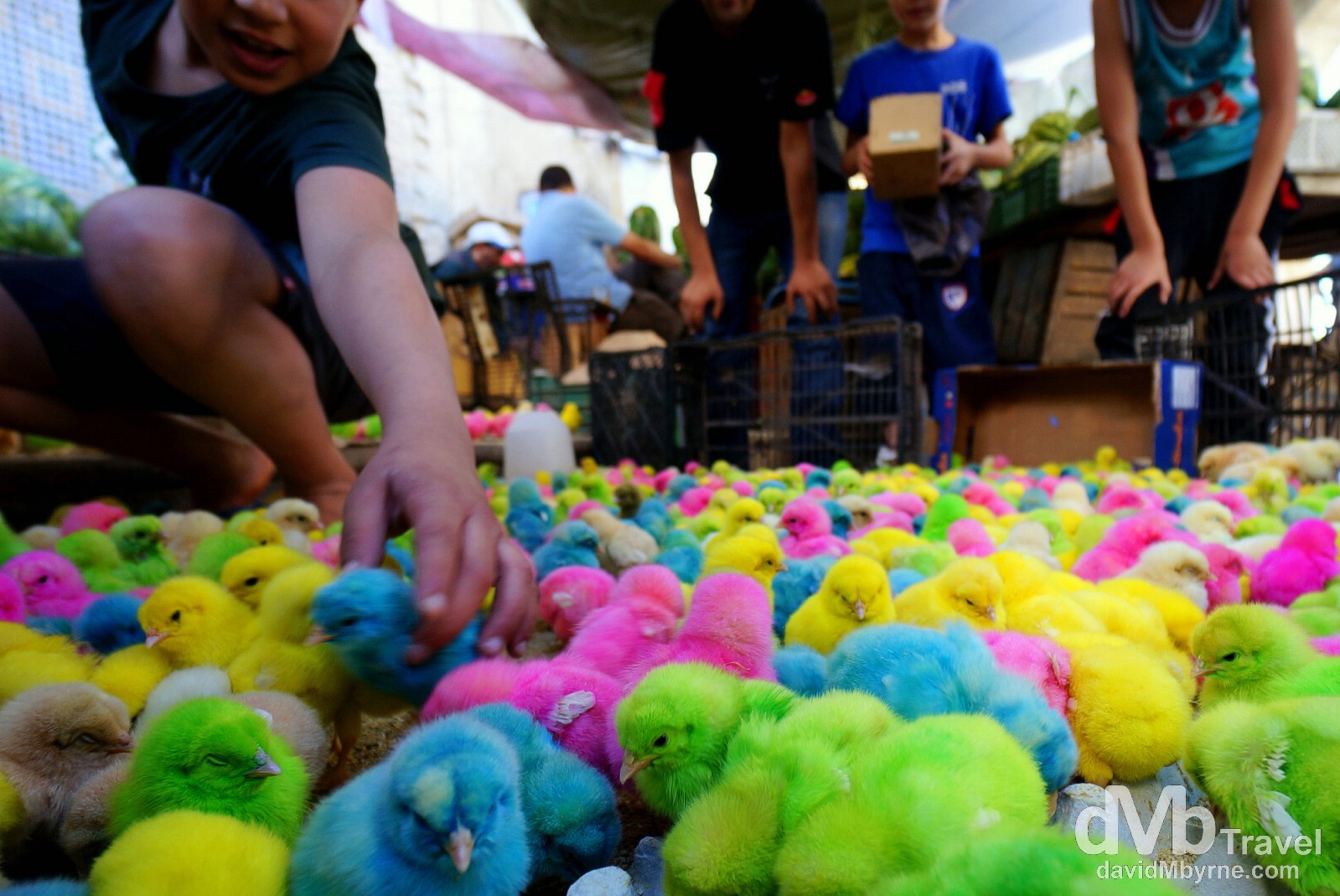 I ‘ve just arrived in Tétouan, my penultimate stop in Morocco. This is the pretty agreeable view from the balcony of my room, room 11, in the Pension Iberia, overlooking the Ville Nouvelle’s Place Moulay El Mehdi. 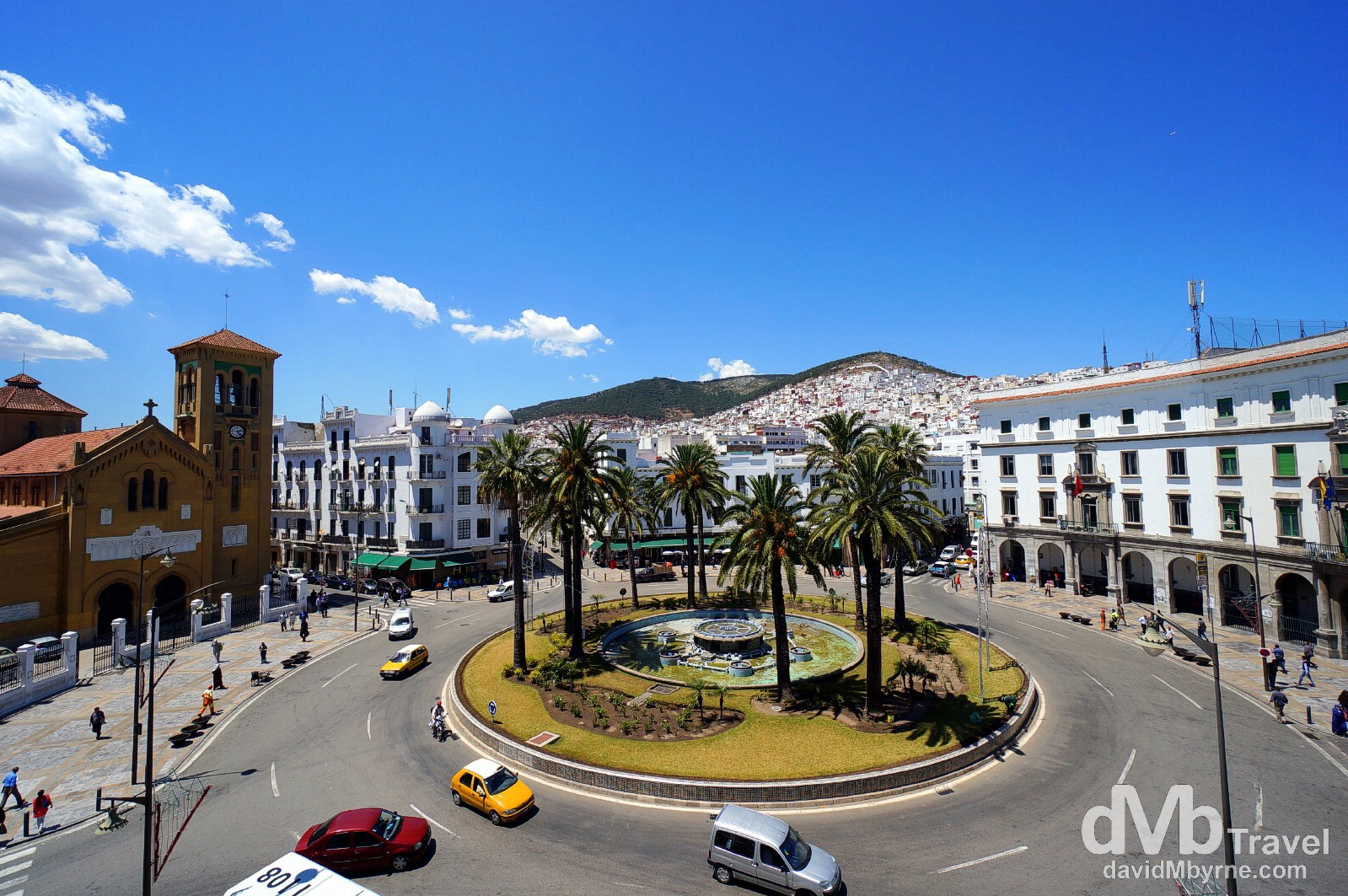 Lonely Planet recommends this place and suggests you try nab room 11 for the views. I didn’t have to as it was one of the only rooms available, although I did have to pay double room price of 100 dirhams (€9, singles are 60 dirhams) to secure it, something I was happy to do.

Accommodation is a large part of a location’s appeal for me so I’m liking Tétouan already. And they even have churches here, thanks to the Spanish who held sway in northern Morocco until Moroccan independence in 1956 – Teotuan was their regional capital. I’m in no way religious but trust me – seeing a church after 8 weeks of ogling at mosques is strangely comforting. Right, I’m off to snoop around the city’s medina, the eight & last of Morocco’s 9 UNESCO World Heritage sites that I’ll be hitting up on this, my first trip to Morocco.

T he little balcony in my Pension Iberia room in Tétouan, Morocco, was great and I enjoyed the bird’s-eye view of Place Moulay El Mehdi that it afforded. But the view aside the room has some serious shortcomings, namely an intermittent power socket (one that when used strangely makes the room light pulse on & off) & a tiny, lumpy bed that was not too conducive to sleeping. So I’m moving on today which is a shame because I like what I’ve seen of the city so far and wouldn’t mind hanging around a bit longer. 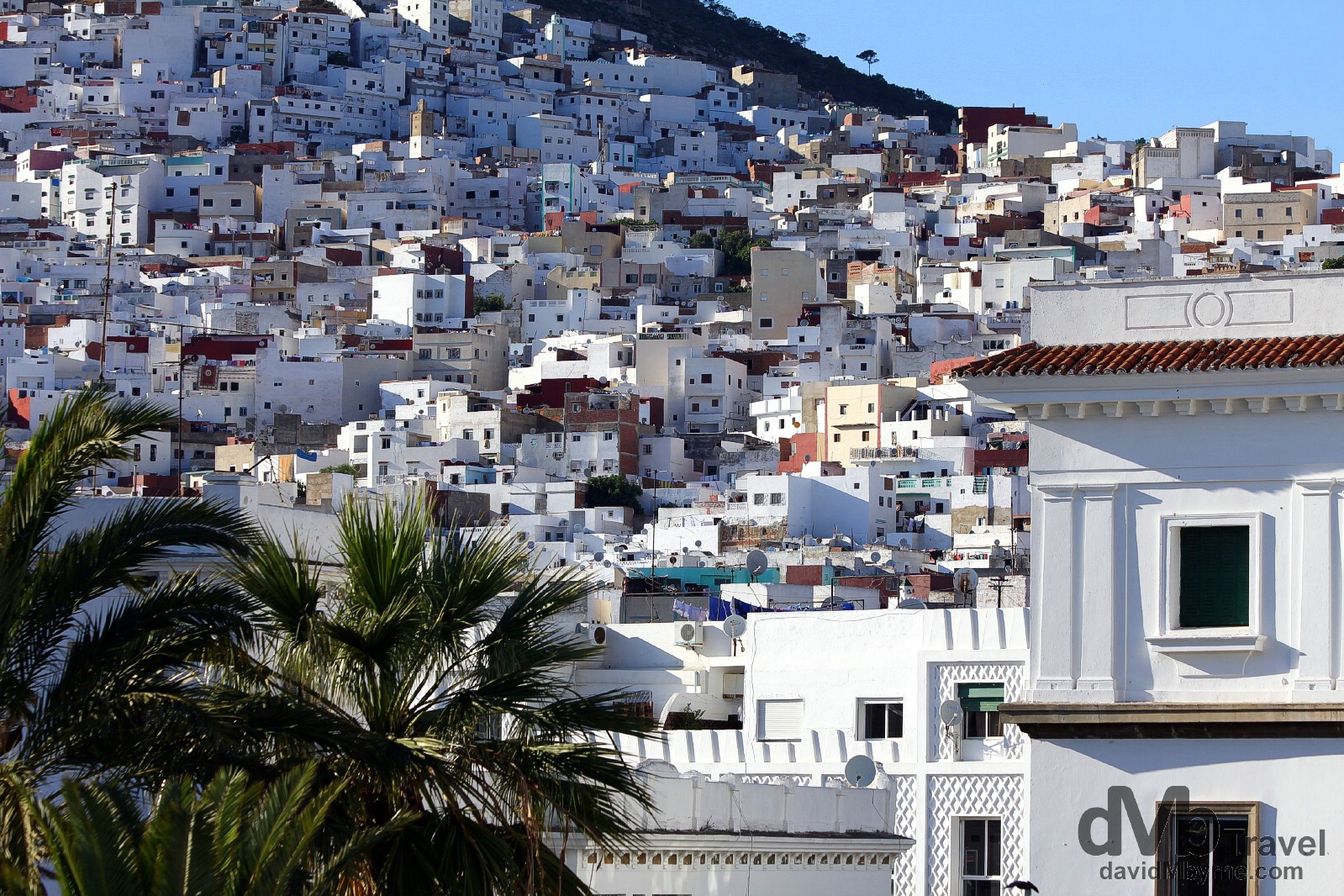 The whitewashed buildings of northern Teotuan at the foot of the northern Rif mountains as seen from Ville Nouvelle. Tétouan, Morocco. June 2nd, 2014

Tétouan Medina
Present-day Tétouan was founded in 1484 by Muslim & Jewish refugees – the latter of which were free to pass between Christian Europe & Muslin North Africa – fleeing the Christian reconquest of Andalusia in southern Spain. They brought with them the look of Moorish Andalusia – tiled lintels, wrought-iron balconies & shuttered windows – a look reflected in the architecture of the Tétouan medina & a look unique to a Moroccan city. 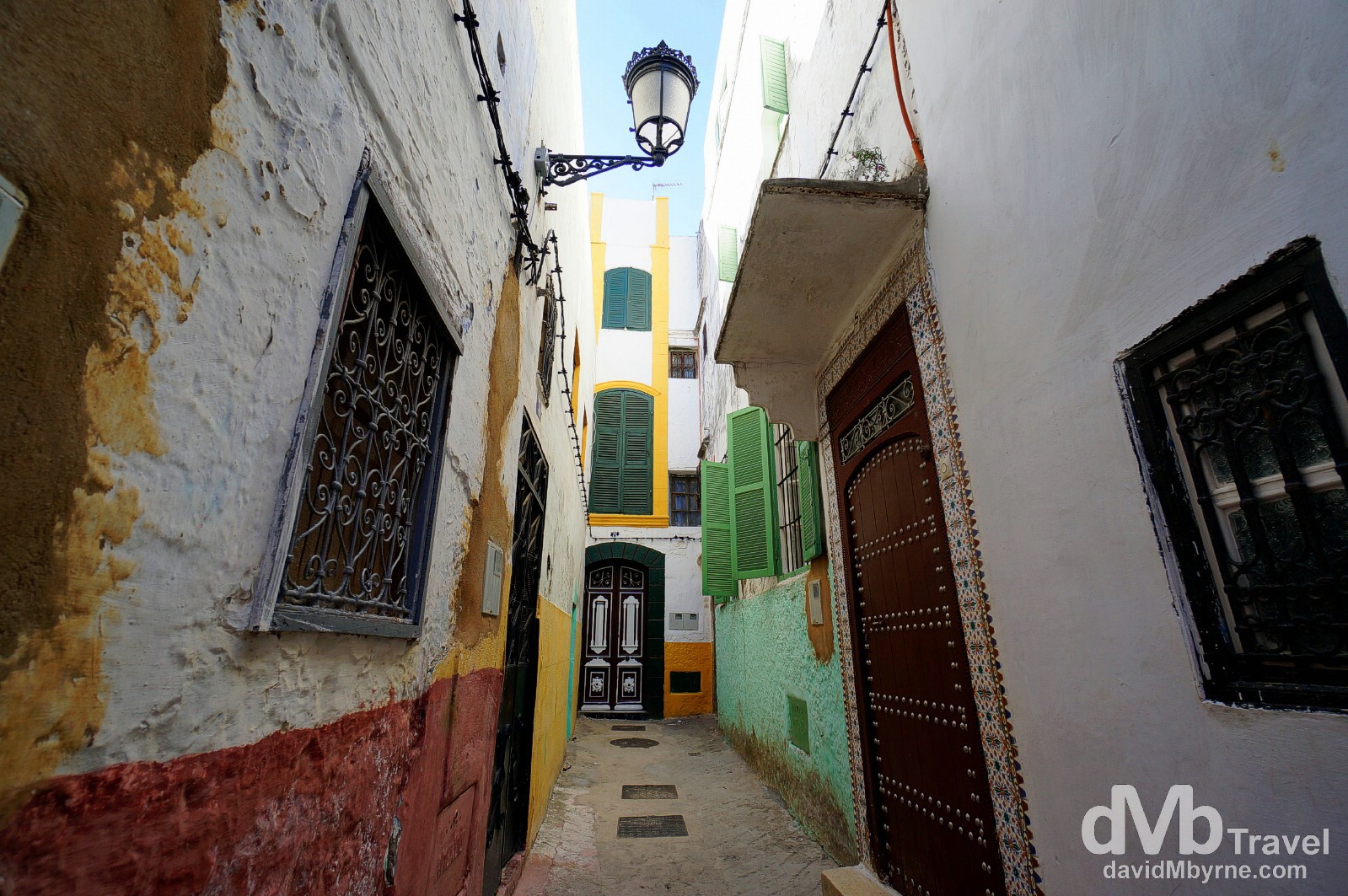 A lane in the ancient UNESCO-listed medina in Tétouan, a typically bustling Moroccan medina except for its whitewashed walls, wider-than-medina-average lanes & general Andalusian overtones, all of which means this medina looks and feels a little different to the Moroccan medina norm, a difference that got it a place on the UNESCO World Heritage list in 1997. Tétouan, Morocco. June 2nd, 2014

Tétouan was of particular importance in the Islamic period, from the 8th century onwards, since it served as the main point of contact between Morocco and Andalusia. After the Reconquest, the town was rebuilt by Andalusian refugees who had been expelled by the Spanish. This is well illustrated by its art and architecture, which reveal clear Andalusian influence. Although one of the smallest of the Moroccan medinas, Tétouan is unquestionably the most complete and it has been largely untouched by subsequent outside influences.

– UNESCO commenting on Medina of Tétouan (formerly known as Titawin) 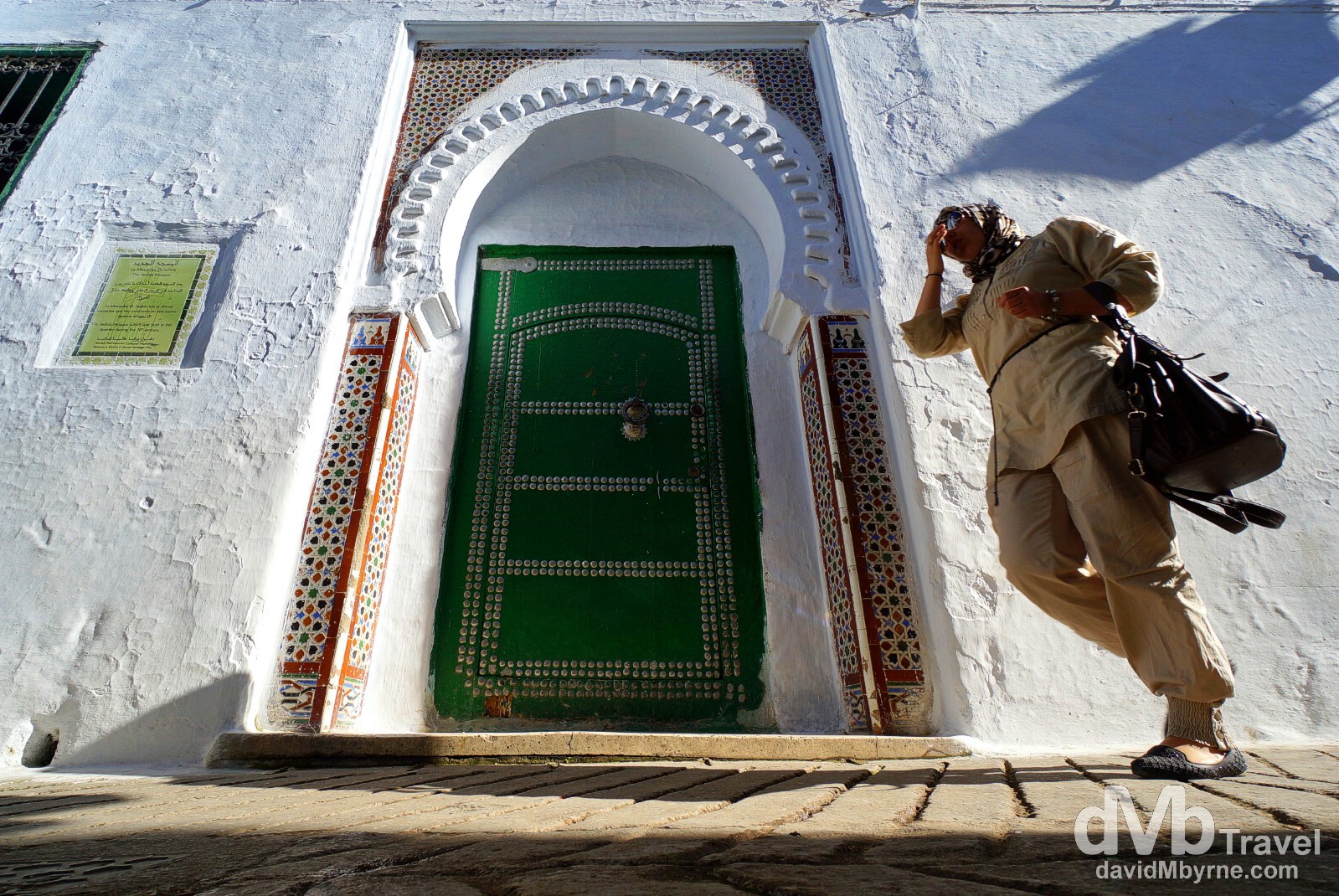 Walking by an entrance to the Jadid Mosque, one of 40 mosques found inside the walls of the UNESCO-listed medina in Tétouan, Morocco. June 2nd, 2014

In a city of whitewashed buildings, Andalusian architecture & a UNESCO-listed medina, it’s a picture of colourful chicks for sale inside the walls of the city’s median that ends up being my pictorial highlight from Tétouan. One chick cost 25 dirhams (€2.20), regardless of colour. In the lanes of the medina in Tétouan, Morocco. June 2nd, 2014 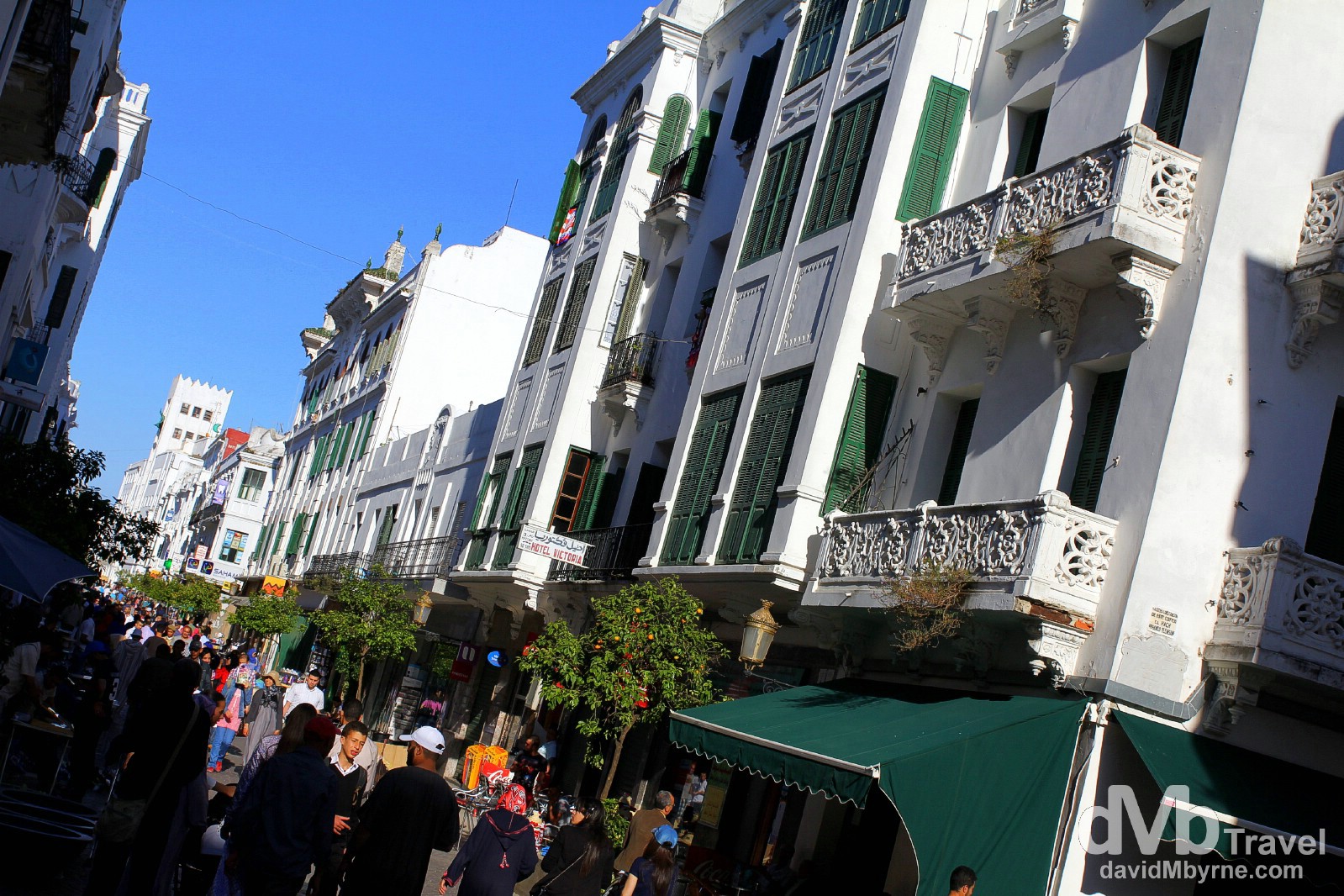 Tétouan has twice been occupied by the Spanish since its 1484 founding, most recently from 1912 through to Moroccan independence in 1956 when the city was the capital of the Spanish Protectorate which encompassed much of northern Morocco; it was here in Tétouan in 1936 that Franco declared his military coup against Spain’s elected Liberal-Socialist coalition government thus igniting the Spanish Civil War. Today the Spanish part of the city, called The Ensanche (Extension), offers a very unique Moroccan experience – a broad pedestrian boulevard lined by bright white Spanish colonial architecture. The blazing white buildings lining the street look great bathed in later afternoon sunlight thanks mainly to a recent restoration financed by the Andalusian government. Boulevard Mohammed V, Tétouan, Morocco. June 2nd, 2014 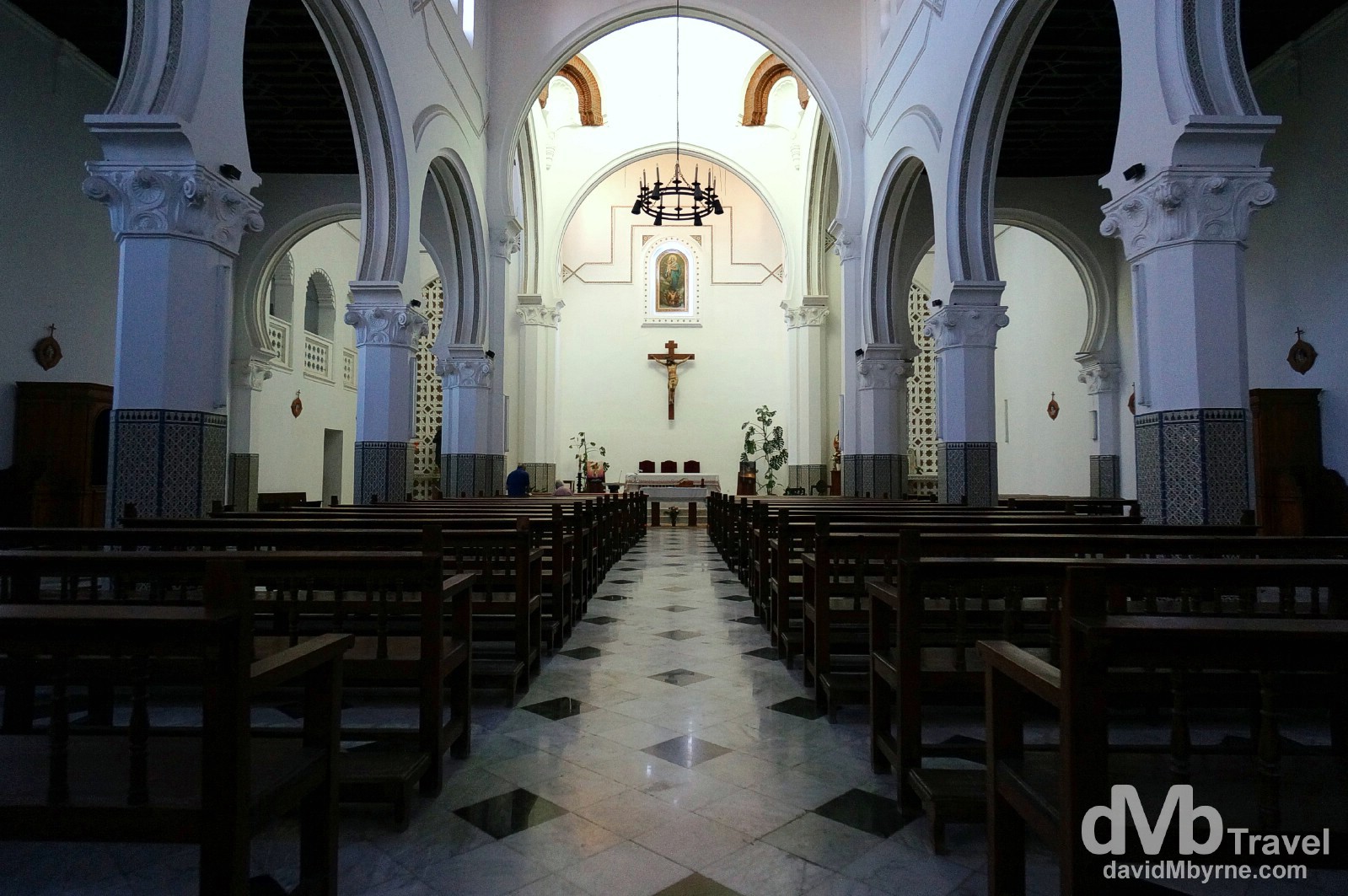 A church. In Morocco. An open church in Morocco even. Well I never. Needless to say mosques are everywhere throughout this Muslim nation. I’ve seen the odd (as in an indefinite quantity) church during my 37 days thus far travelling the country and have made efforts each and every time to visit, just for the novelty of it. But each & every church I’ve attempted to visit in Morocco to date has been closed. But not this, the Iglesia de Bacturia on Place Moulay El Mehdi here in Tétouan, the first church in Morocco that I found open & was thus able to enter. The church, built in 1917 by the Spanish, is still active & caters to a splattering of the city’s Christians every Sunday, not to mention tourists like me who visit for the pure novelty of visiting a hens-teeth-rare church in Muslim, mosque-heavy Morocco. Iglesia de Bacturia, Tétouan, Morocco. June 2nd, 2014