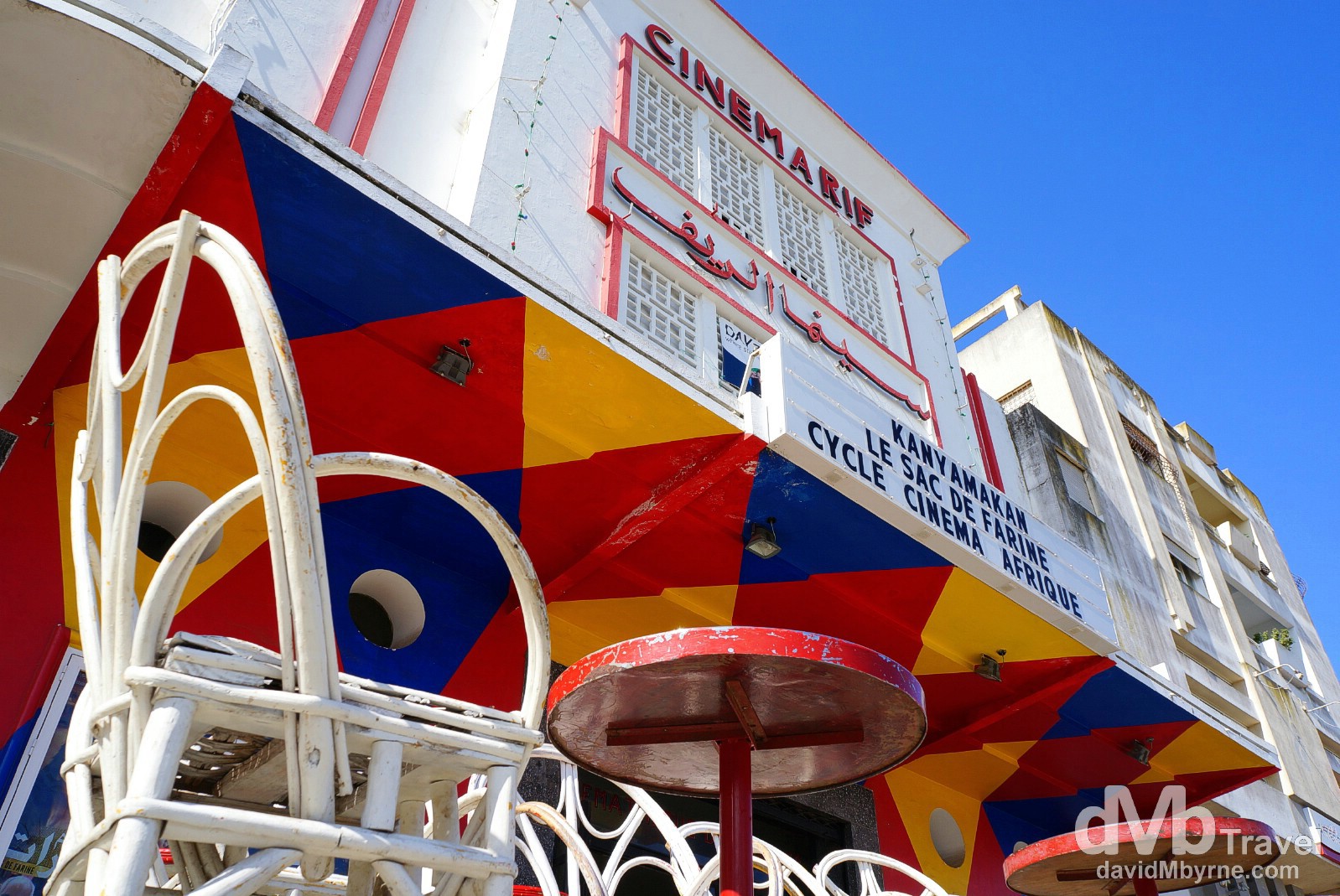 O ne night. I hadn’t planned on only spending one night in Tangier, my last stop on my 39-day Moroccan adventure, but one night is all it’s getting.

The northwest can be an intense introduction to Morocco, encompassing the two Moroccan cities – Tangier & Tetouan – that are most notorious as blackspots for hustlers and unofficial guides preying on first-time visitors. Tangier, hybridized and slightly seedy from its long European contact, has a culture distinct from any other Moroccan city and an age-old role as the meeting point of Europe & Africa. 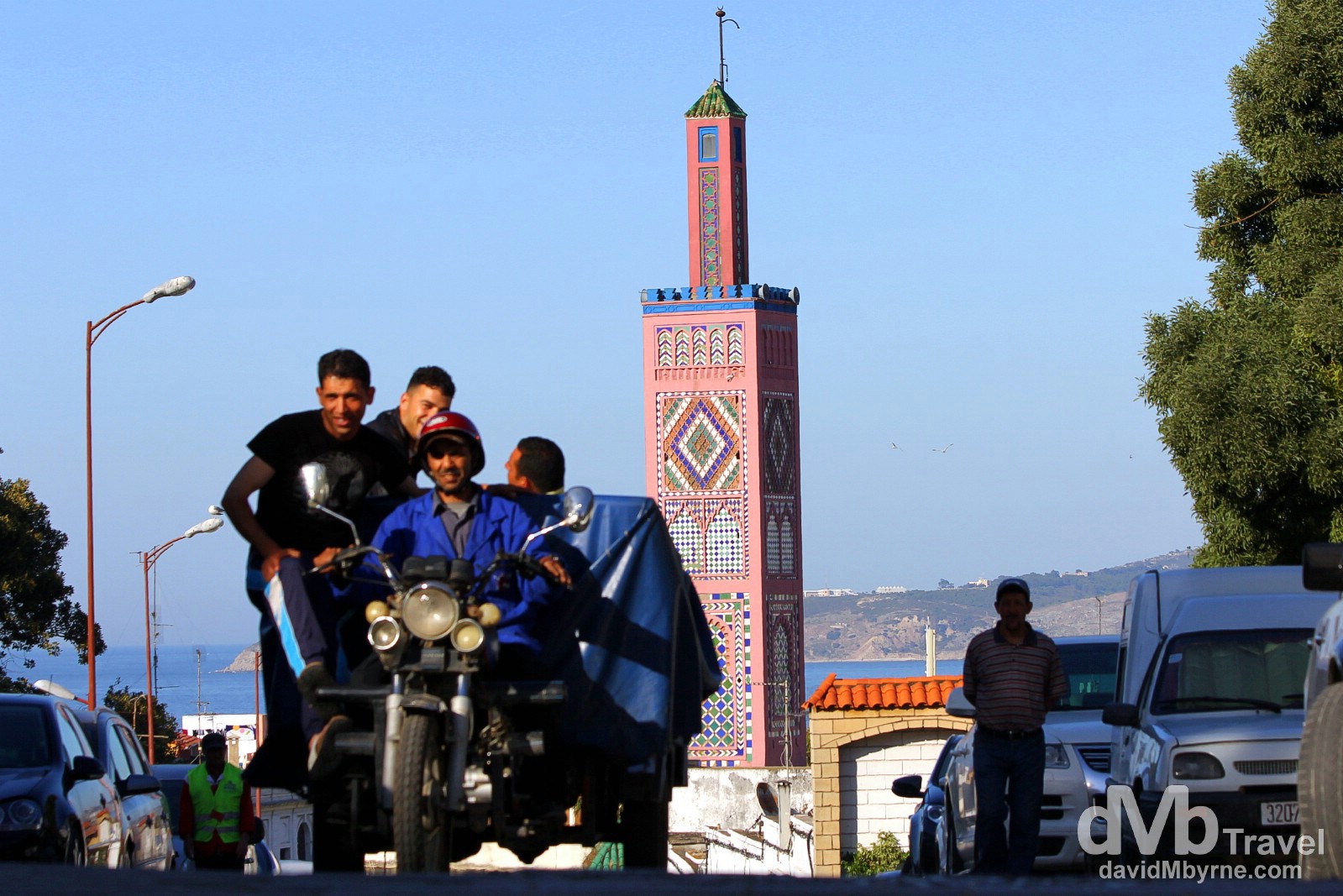 One of the nicer mosque minarets I’ve seen in Morocco (probably the nicest actually) was this one in Tangier’s Grand Socco, the main square/meeting place in the city. Given the positioning of the sun at this time of day (late afternoon), this picture was taken away from the square on Rue Sidi Bouabid. I was capturing the minaret but the traffic plying the road made a nice addition to the shot. Tangier (

The Cinema Rif in Tangier’s Grand Socco. The Art-Deco building is, according to Lonely Planet, ‘the brightest light on Tangier’s cultural map.’ It certainly is bright (& colourful). Grand Socco, Tangier, Morocco. June 4th, 2014

Tangier
There has been a settlement here since the seventh century BC; the Romans were here for some 400 years until the collapse of their little western empire in the mid-fifth century; the Arabs used it as a base for their invasion of the Iberian Peninsula in the early 8th century; & the first of the colonial powers to call Tangier their own were the Portuguese in 1471, followed by the Brits 200 years later. The city’s strategic location meant it was a coveted prize for any would-be colonial power and when Spain & France decided to carve up Morocco between them in the early part of the 20th century the Brits intervened to insist that Tangier become an International Zone with all Western powers having an equal measure of control. This came to pass in 1923 with the French, Spanish, British, Portuguese, Dutch, Belgians, Italians and Swedes all having a say in Tangier’s affairs, with the Americans joining the fray after World War II. 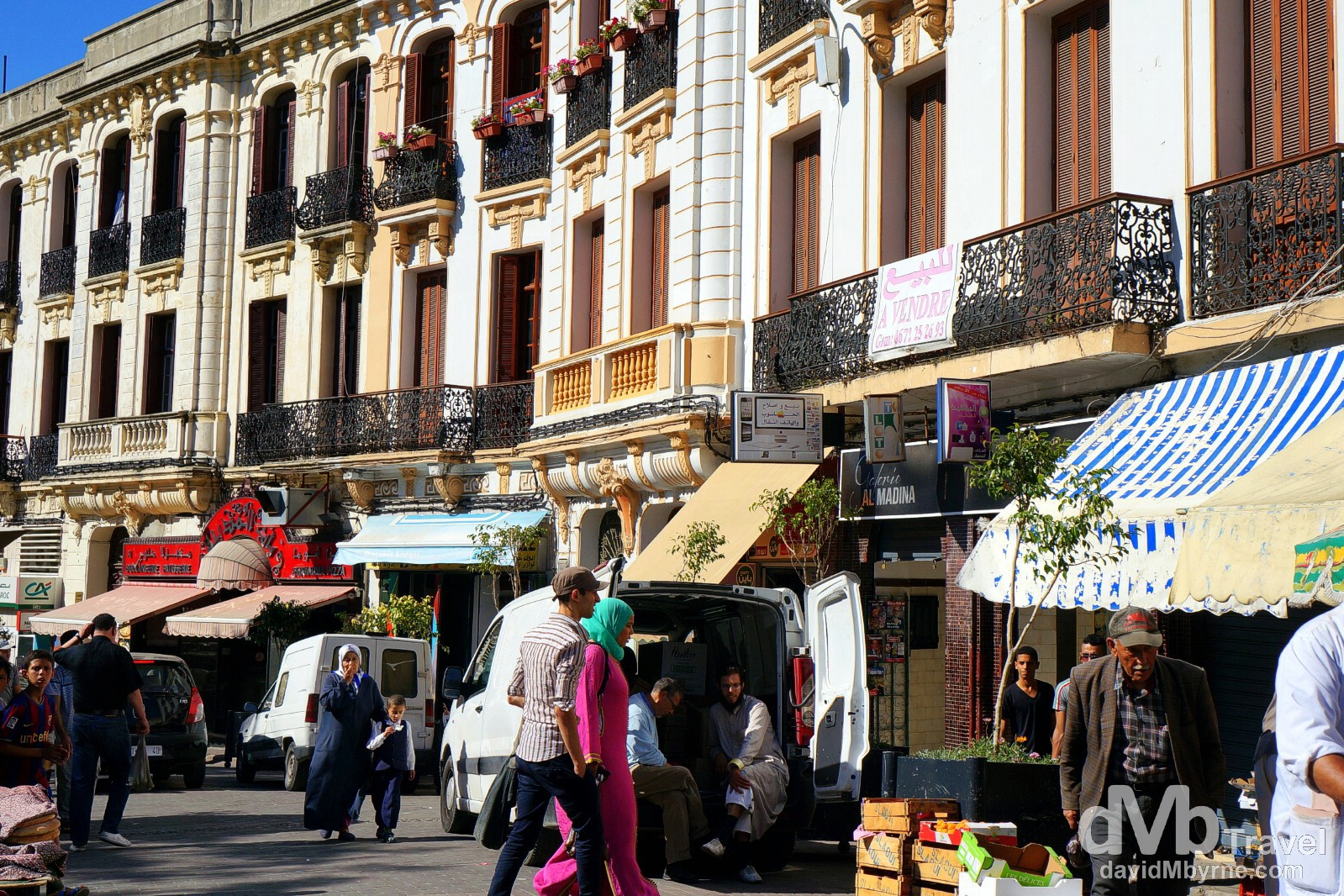 Needless to say with this mix Tangier was a very different Moroccan city to all the others, one with its own laws and administration & one that drew an eclectic mix of exiles, expatriates, & refugees. The city flourished during its heyday in the first half of the 20th century when its hedonism was legendary & when the city famously took on the mantle of the world’s first openly gay resort. Moroccan independence in 1956 (from the French & Spanish) signalled the beginning of the end of the good old days & today the city looks like one whose best days are firmly behind it, with remnants of its raucous & glorious past only visible now through the ageing facades of the many famous street-side cafes & once grand hotels. 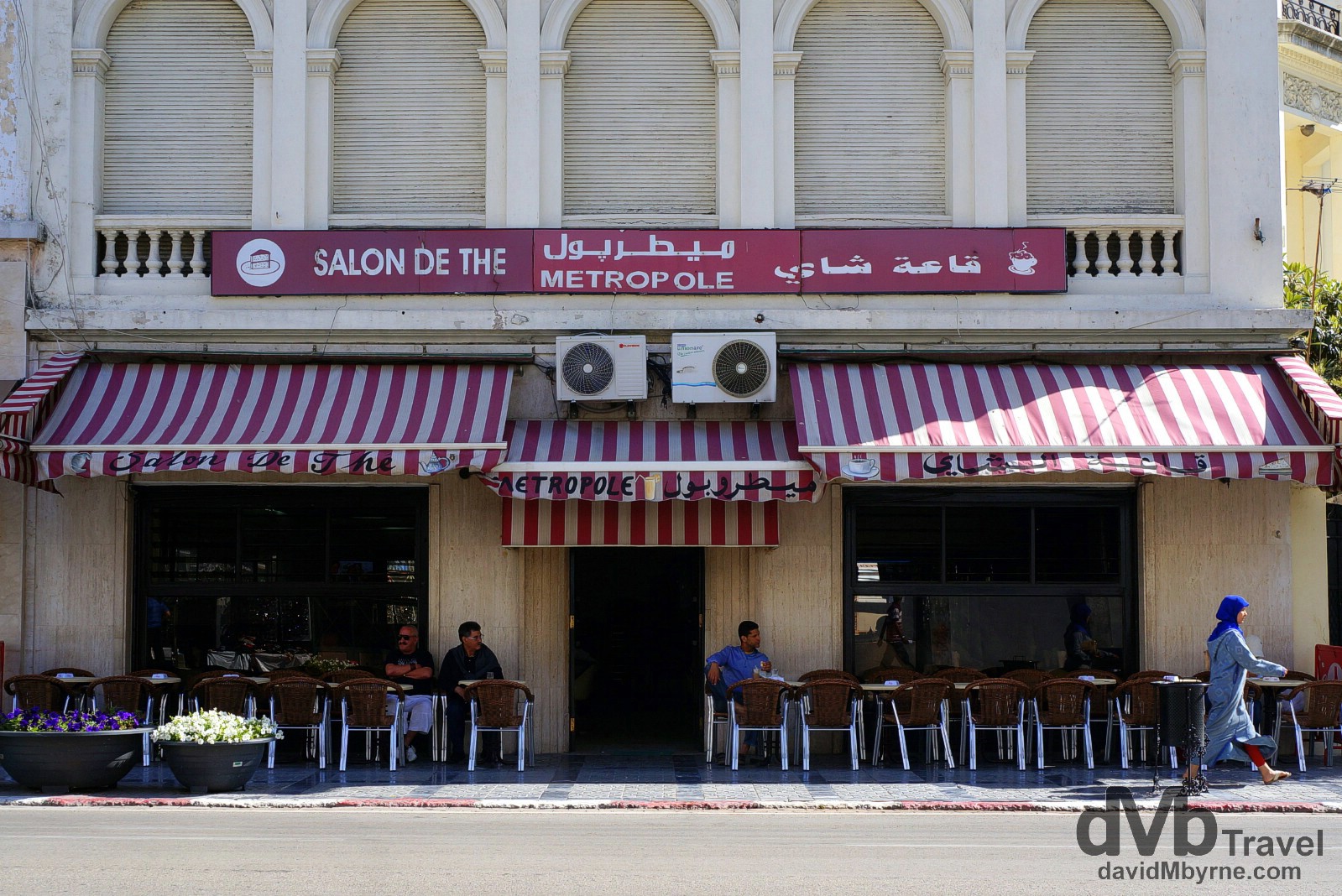 A large portion of my 39 days in Morocco were spent sitting outside cafes like this, all of which were/are a staunchly male domain – I don’t ever recall seeing a women in any of the cafes I frequented. Sitting & watching the world go by in roadside cafes like this over 10 dirham (€0.90) café au laits was a definite highlight of my time in Morocco. Tangier has a lot of famous cafes – Café de Paris & Café Central in particular, both of which I frequented during my limited time in the city – but this, Café Metropole, is where I had my very last coffee (& breakfast, purchased from the patisserie across the road) in Morocco before getting the ferry to Spain. Cafe Metropole, Boulevard Pasteur, Tangier, Morocco. June 4th, 2014 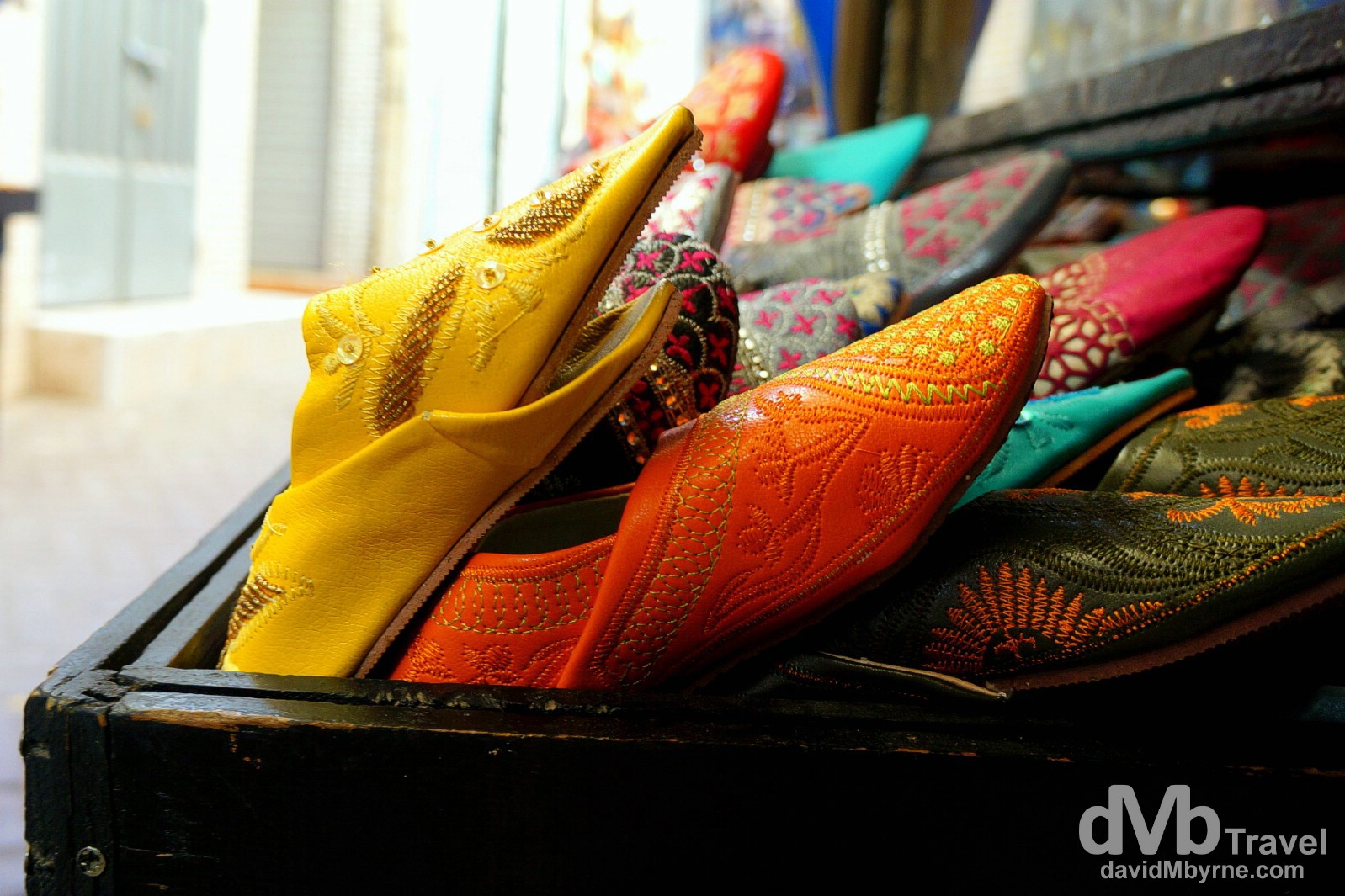 Most of my time in Tangier, if not spent in cafes, was spent investigating ferry options out of the country. I wasn’t much of a tourist in the city but when I was I took a stroll through portions of its Old Town medina. However, at this stage of proceedings, & after almost 6 weeks of exploring Moroccan medinas, I’m done with crumbling, atmospheric lanes full of shops, wrong turns & where are you from? questions from hopeful merchants. But even when I’m indifferent to my surroundings I still have my camera on hand. This is a picture of for-tourists babouche, Moroccan slippers, on sale in a medina lane. Tangier, Morocco. June 3rd, 2014 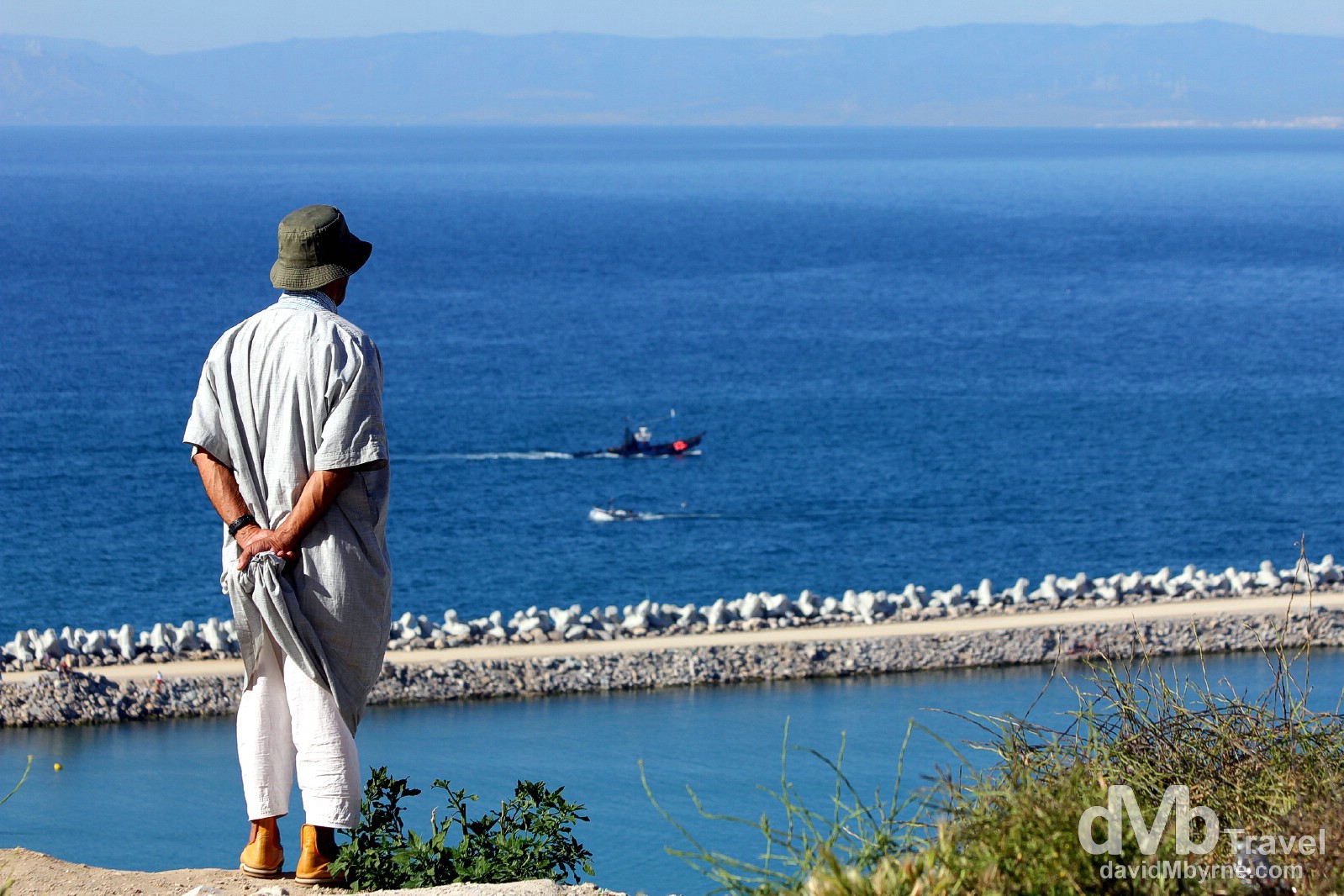 I hadn’t realised Spain, & Europe, was as close as it actually is to Tangier until I emerged from behind the Tangier medina walls overlooking the Strait of Gibraltar. I was quite taken aback & I stood there for long while peering across the 15 kilometre body of water separating the two continents, as did the man I captured in this picture. It’s weird but standing here on the very tip of northern Africa I felt very close to home. Tangier, Morocco. June 3rd, 2014

Trying to get to #Gibraltar from #tangier which is a bit of a hole to be far, is proving a challenge. #travel #dmbtravel

Tangier, the so-called Gateway to Africa, is, to be fair, a bit of a hole. It looks and feels every bit as rough around the edges and seedy as its reputation suggests.

Within an hour of walking the streets yesterday, day 38 in Morocco, I had been accosted more times than I had been over previous 37 days. I felt like I was in Egypt, such was the attention I was garnering. Walking the streets of any Moroccan city & you’ll invariably attract the attention of a hanger-oner whose first question will always be, friendly or otherwise, “where are you from?” But here in Tangier the attention is ratcheted up a notch (or three). I even heard “f**k you” a few times when flat out ignoring or, if I was in a good mood, politely rebutting the latest advance to lead me to a hotel, a souvenir shop, a restaurant or wherever. That was a first for Morocco & while I was hardly offended (I’m travelled enough to have developed a thick skin) I was still taken aback. Most of these hustlers prey on first-timers, those right off the boat – a lot of people start their Moroccan odyssey here in Tangier, I just happen to ending mine. Unfortunately the city is not a good introduction to the country, but fortunately neither is it representative of the rest of Morocco either. My time in Morocco is at an end & even though I’m leaving the country from probably its biggest shit-hole, even that can’t detract from the awesome experience Morocco has been.