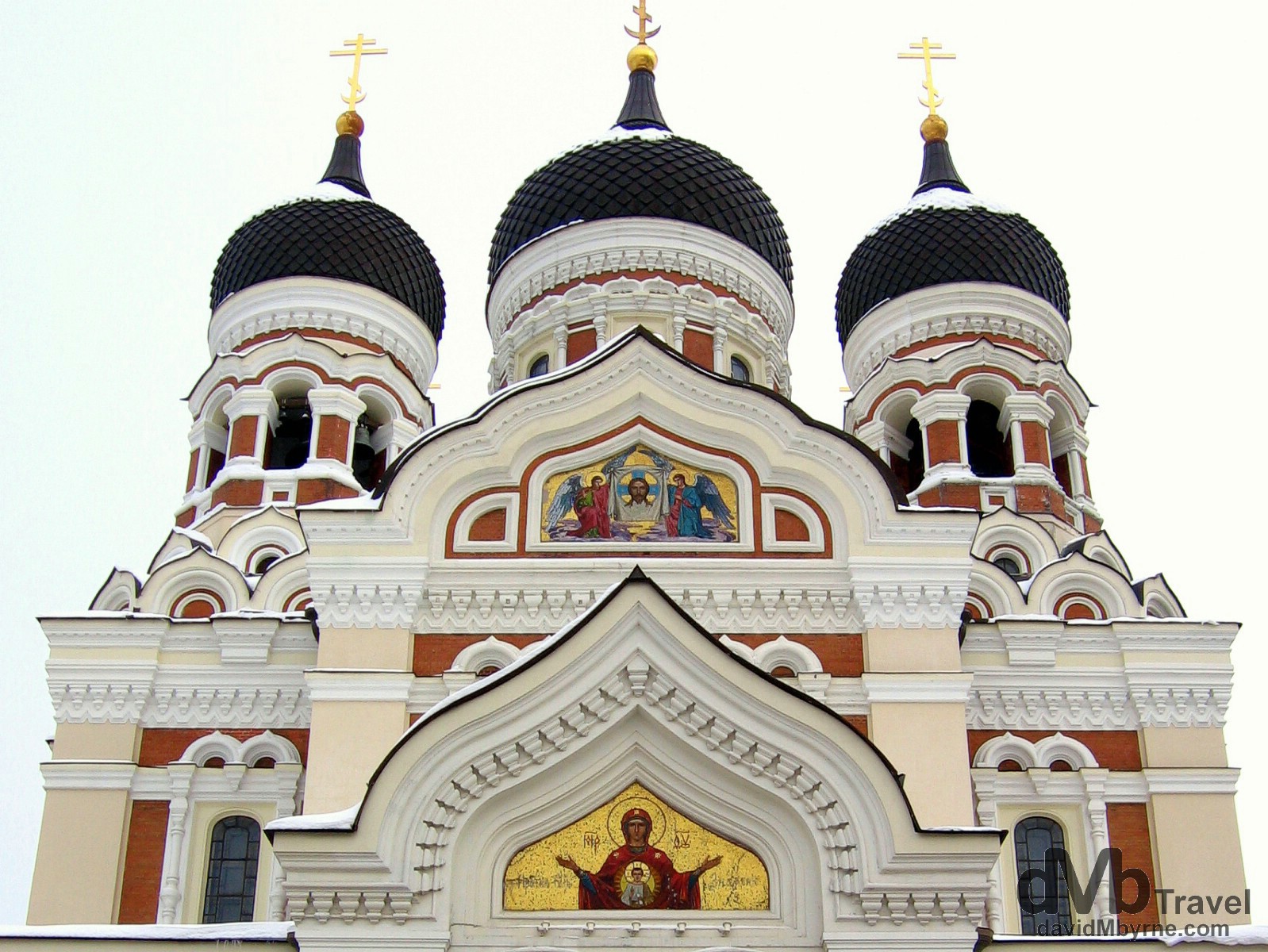 I‘ll freely admit I knew very little of what to expect from Tallinn, the capital of the Baltic State of Estonia. However, I now know that it is a charming little European capital with a stunning UNESCO protected medieval Old Town. While all three of the Baltic State capitals – Tallinn, Riga & Vilnius – can boast a UNESCO listed Old Town, Tallinn’s is just a bit special, especially if you’re lucky enough to explore it, as I just did, when it’s covered in a blanket of snow.

Tallinn’s Old Town is a beautifully restored 13th century medieval walled town dotted with soaring cathedral spires & sentry towers & linked by a labyrinth of winding cobblestone streets. It really is pretty & has the appearance of a fairy tale medieval settlement rather than what it actually is; a modern capital city. And with a blanket of snow covering almost everything, and the odd snow drift here and there to add to the romanticism, I could have been forgiven for thinking I was wandering around a Disney movie set. This is a picture of a snowy Old Town Tallinn as captured during a break in a snow blizzard as seen from a lookout in the Toompea, or upper Old Town area of the city, an area that has traditionally been the centre of Tallinn and its medieval seat of power. This picture shows the northwestern area of the Old Town with the tall, unmistakable spire of Oleviste Church the dominant feature (it was once the world’s tallest building). Also prominent are the 4 neighbouring round towers (left) that mark the longest accessible stretch of the lower town walls still standing. The water in the distance is a section of the Gulf of Finland that I had sailed across yesterday on the ferry from Helsinki, Finalnd. Old Town Tallinn (

Yesterday evening was a glorious evening (today not so much). Having disembarked the ferry from Helsinki, I was quick to hit the charming, icy streets of Tallinn’s Old Town for an initial look around. There wasn’t much light left on this day but what light remained was gorgeous. 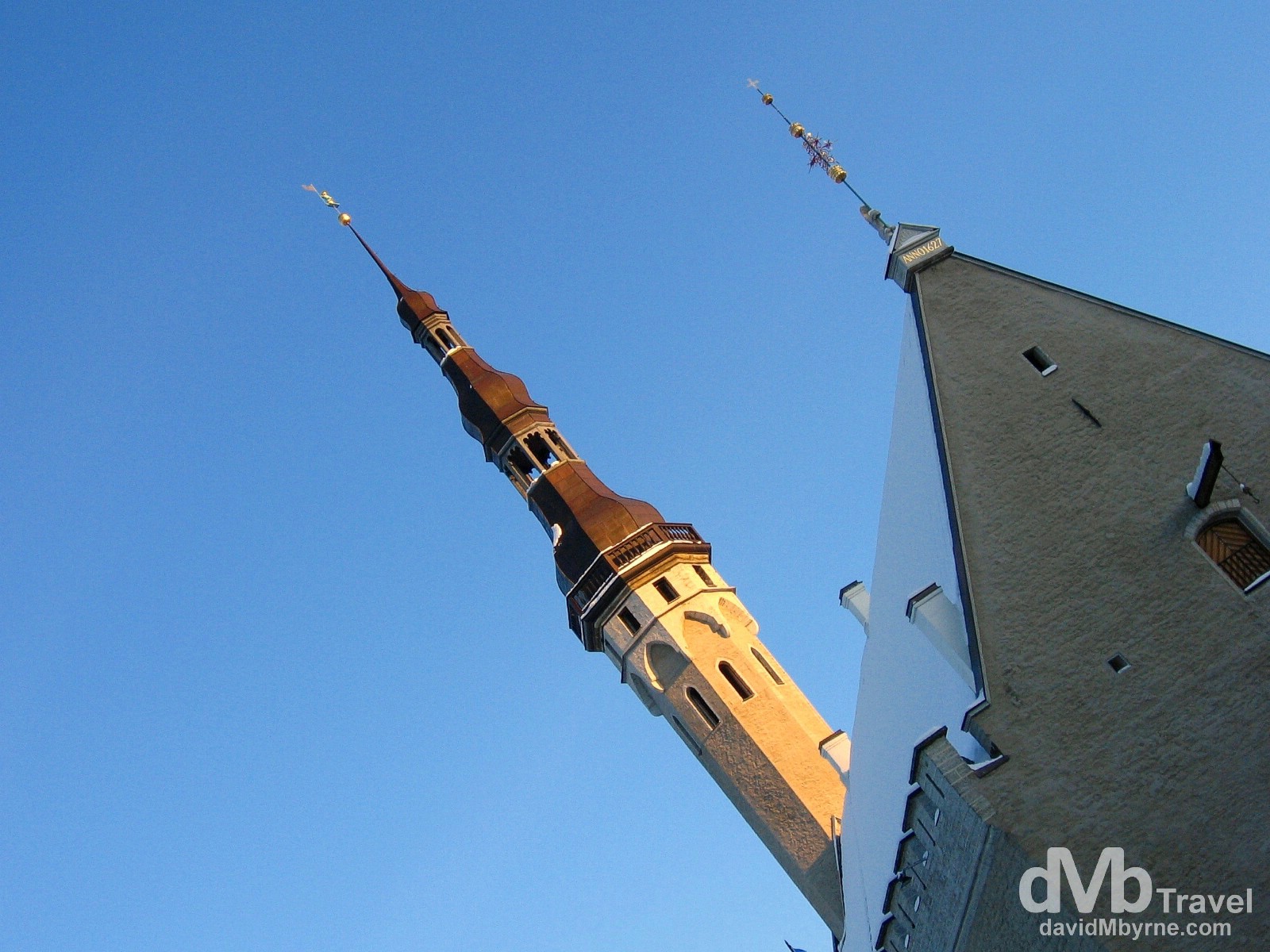 The spire of Tallinn Town Hall in Raekoja plats, or Town Hall Square, the only remaining Gothic Town Hall in Northern Europe. The square itself has been the centre of Tallinn life since markets began here, probably in the 11th century. It’s the heart of the city, full of outdoor cafes in the summer and the home of a huge Christmas tree in the winter, a tradition some 550 years old. An inviting spot any time of year. Town Hall Square, Old Town Tallinn, Estonia. Estonia. March 1, 2006.

Tallinn, Estonia & Baltic State History
Tallinn has had a storied past, as you might expect of a city in this part of the world. It was built on a vantage point at the opening of the Gulf of Finland and it has, due to its key port position, incited the attacks of Swedish, Danish, German and Russian armies, the latter only a recent departure leaving a legacy of the Soviet years that the country now carries with it into the new, for Estonia, EU era. Estonia – as well as neighbouring Latvia & Lithuania, the so-called Baltic States – was part of the Russian Empire until 1918 when it proclaimed its independence. During the next two decades it tried to assert its identity as an independent nation, a tough thing to do squeezed between the rise of German Nazism to the west and the dominion of Stalin in the USSR to the east. A big-boys pact between Hitler and Stalin saw Soviet troops arriving in 1940 and once again Estonia was absorbed into the Soviet Union. Resistance, seemingly, was futile. World War II saw fighting in the city between German and Russian forces (so much for the aforementioned pact) and the inevitable destruction of scores of distinguished buildings. The Nazis drove the Russians out in 1941 only to see them return again in 1944. After the Germans lost World War II, the Allies took it among themselves to carve up this region of Europe and as a result the Baltic States once again fell behind the Iron curtain under Russian control. That finally came to an end with the collapse of Soviet power in 1991 and after 51 years of tireless determination the Baltic States, led by Lithuania, won their hard fought independence. They were quickly recognized by the world community as independent states and admitted as members of the United Nations. 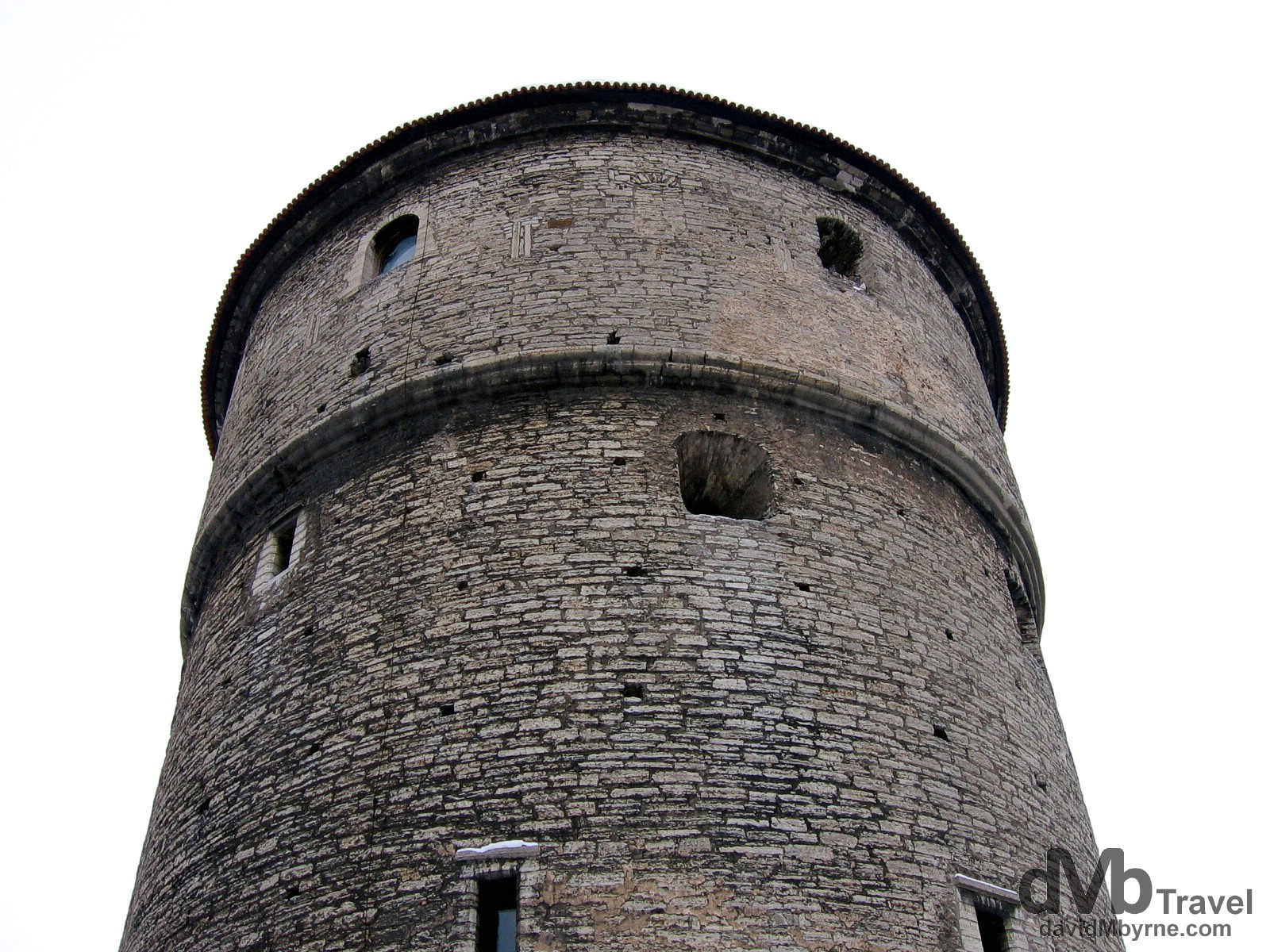 This is one of the many towers in present-day Tallinn’s Old Town walls which were once part of a much larger gate system built in the 14th century. This particular tower, dating to around 1475, is one of the larger remaining towers and today it houses a museum, one called Kiek in de Kok which roughly translates to ‘Peep into the Kitchen’ harking back to the days when medieval voyeurs could see into the kitchens of the Old Town from the upper floors of the tower. The museum, although small, is spread over several floors & displays maps and models of old Tallinn. Old Town, Tallinn, Estonia. March 2, 2006. 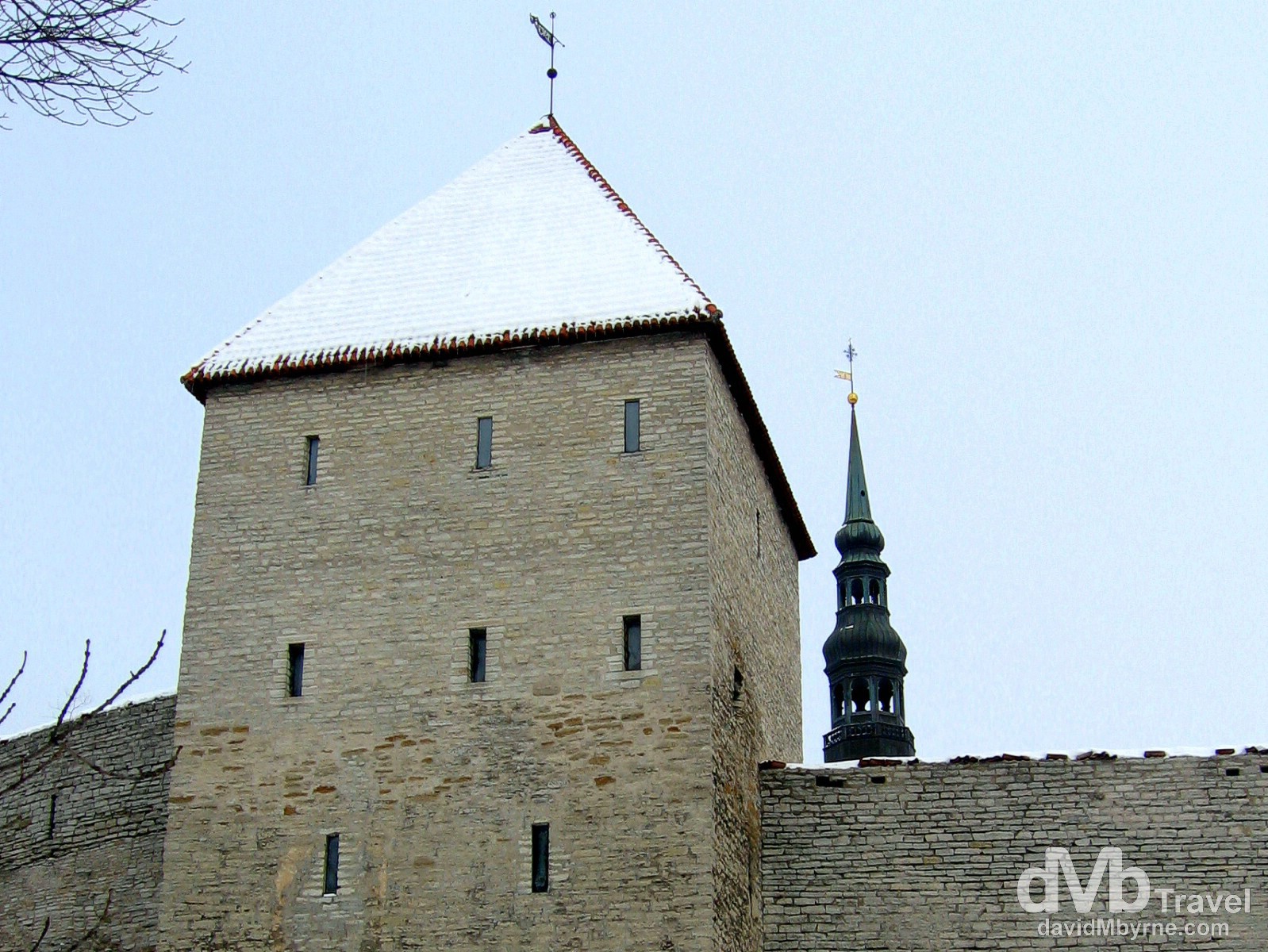 Walls, towers & spires of the medieval Old Town, Tallinn. The slender spire in the distance is that of the 15th century Niguliste Church, another Old Town Tallinn landmark which today houses a museum of medieval church art. Old Town Tallinn, Estonia. March 2, 2006.

The facade of the Alexander Nevsky Cathedral, the largest and grandest orthodox church in Toompea, the upper Old Town area of Tallinn, an area of the city that has traditionally been the centre of Tallinn and its medieval seat of power. The Alexander Nevsky Cathedral itself was built by the Russians between 1894 & 1900 as part of their Russiaficaton of the city & it sits directly across from the very pink Toompea Castle, Estonia’s seat of government. Tallinn, Estonia. March 2, 2006. 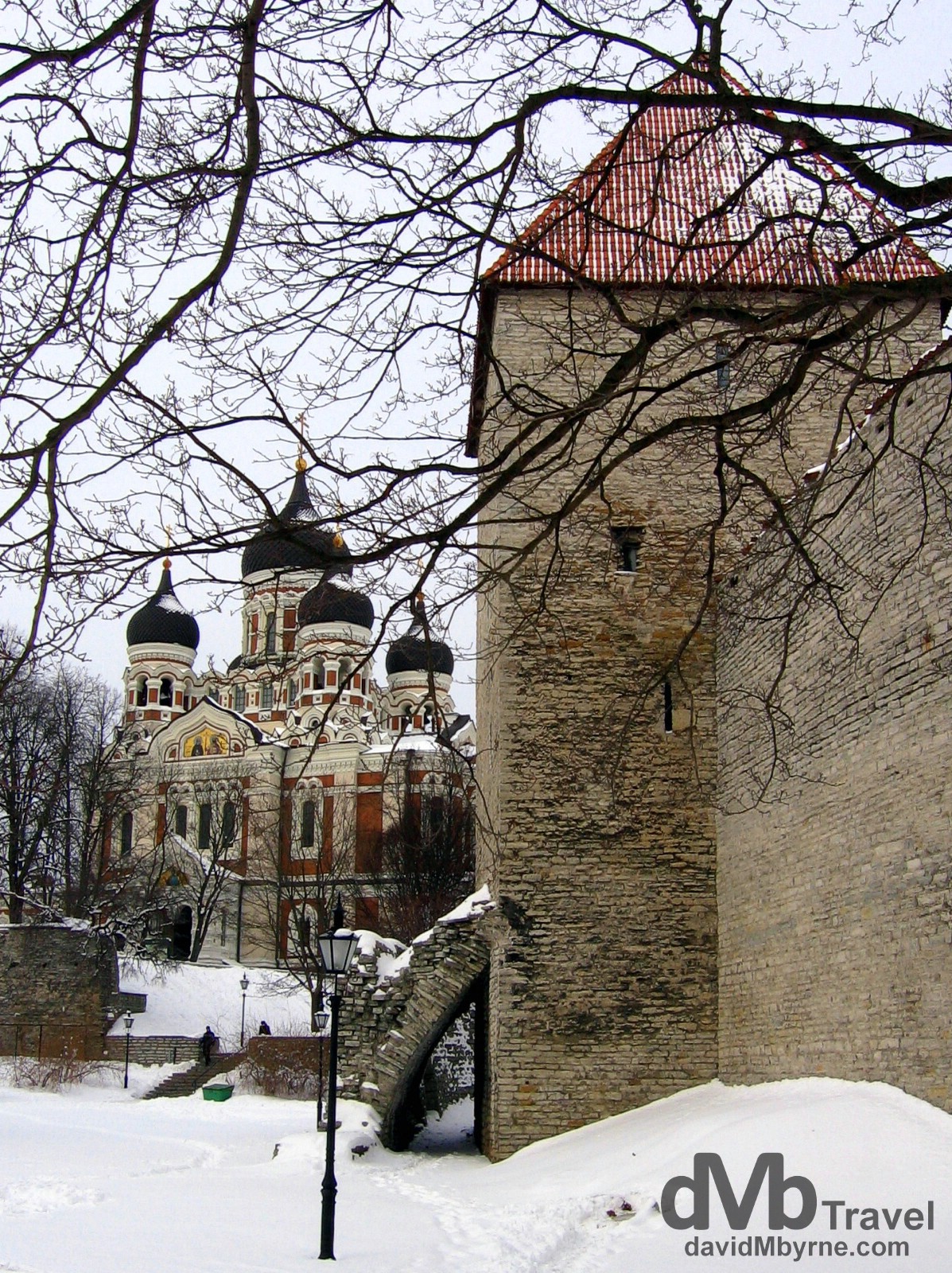 The Alexander Nevsky Cathedral as seen from a park in Old Town Tallinn, Estonia. March 2, 2006 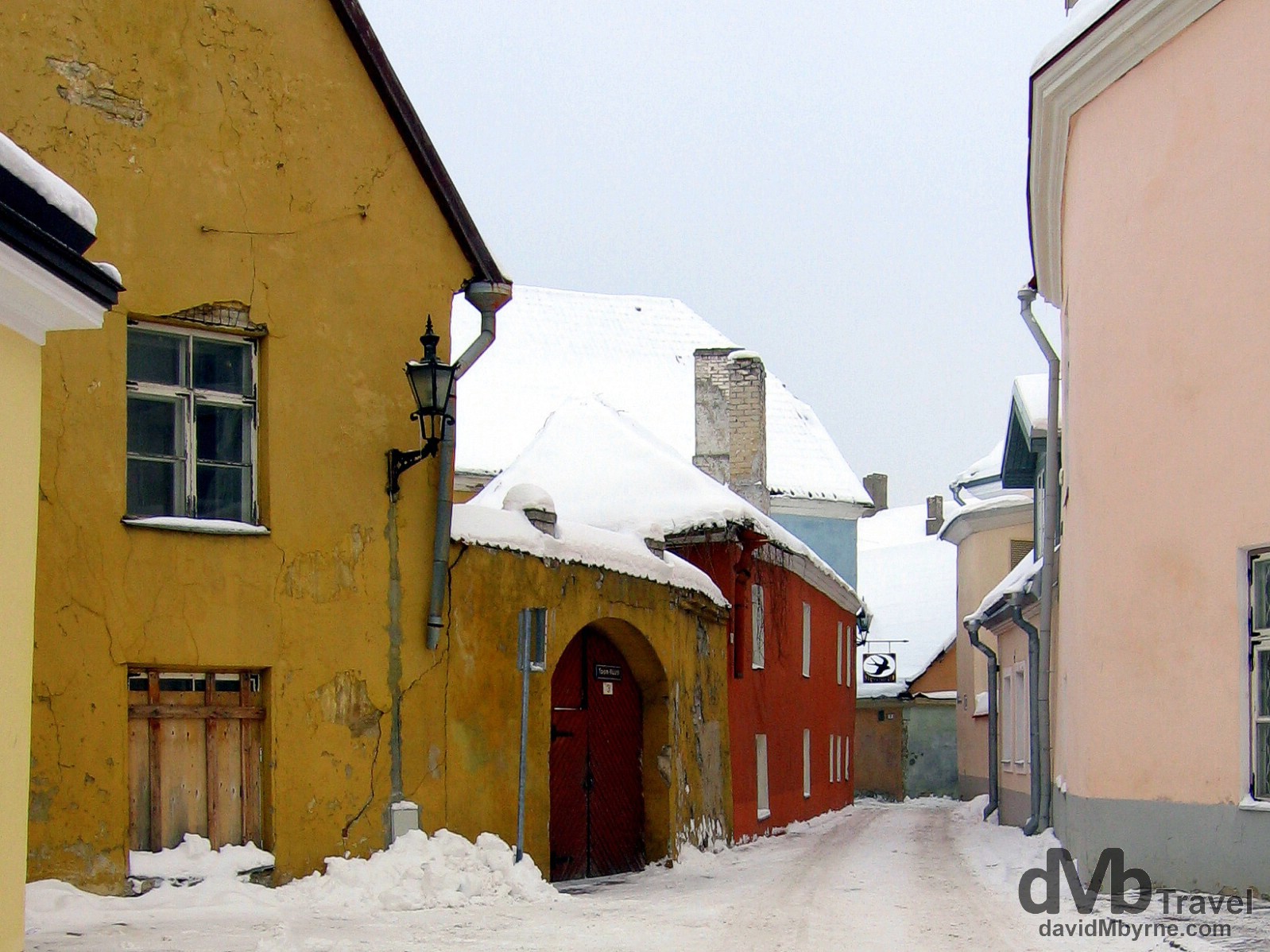 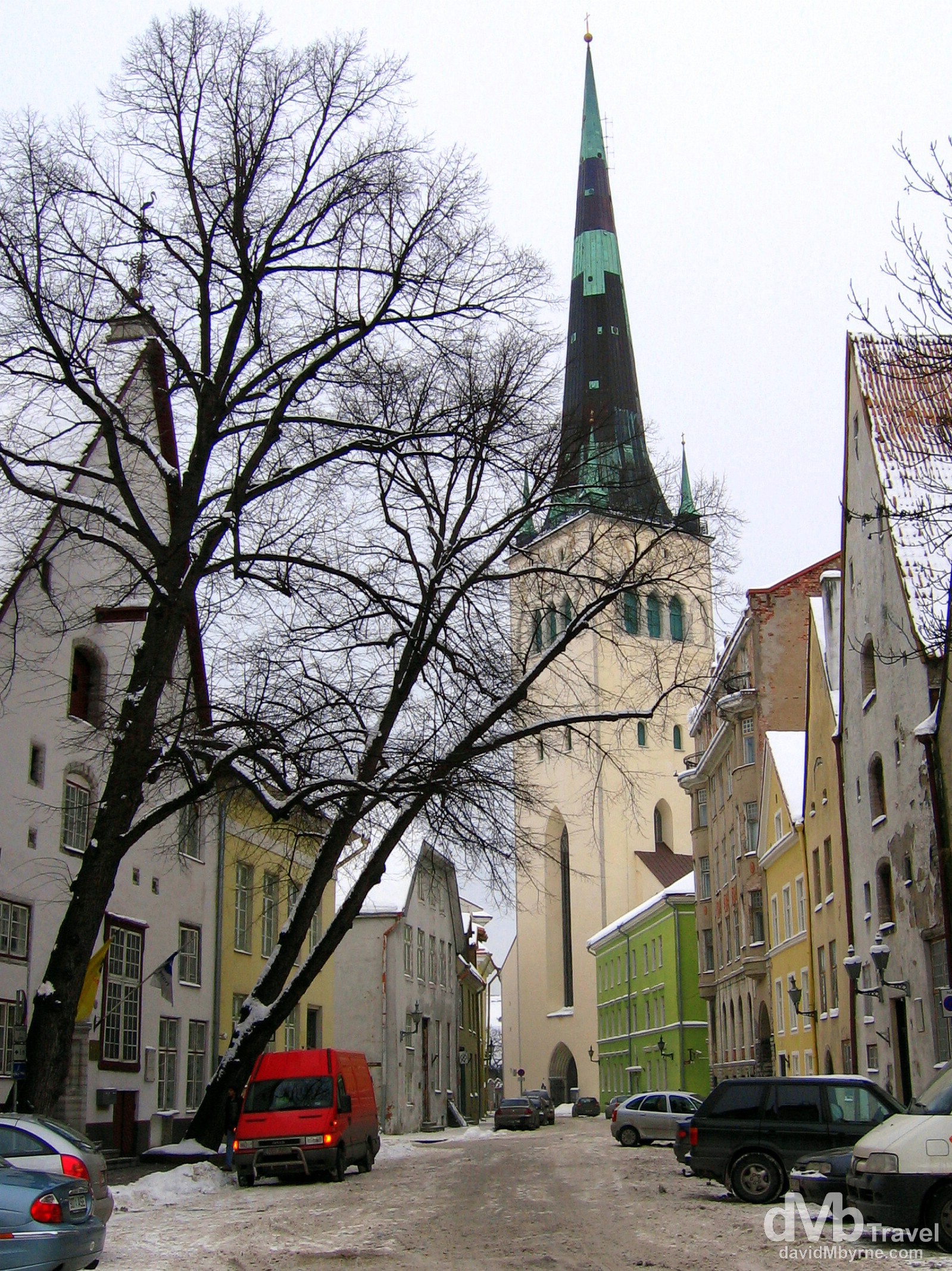 Tallinn’s landmark Oleviste Church towering over Pikk tanav, a residential street in Tallinn’s Old Town. This is, not surprisingly, the tallest building in the city. It was first built in the 13th century and was dedicated to the 11th century King of Norway, King Olav II. At one stage the church’s spire topped out at an impressive 159 metres making it the tallest building in the world – various fires and reconstructions have brought it down to its present height of a more modest but still impressive 124 metres. Although it was dedicated to King Olav of Norway, it will forever be linked in local lore to another Olav, the church’s legendary architect, who fell to his death from the tower. Tallinn, Estonia. March 2, 2006. 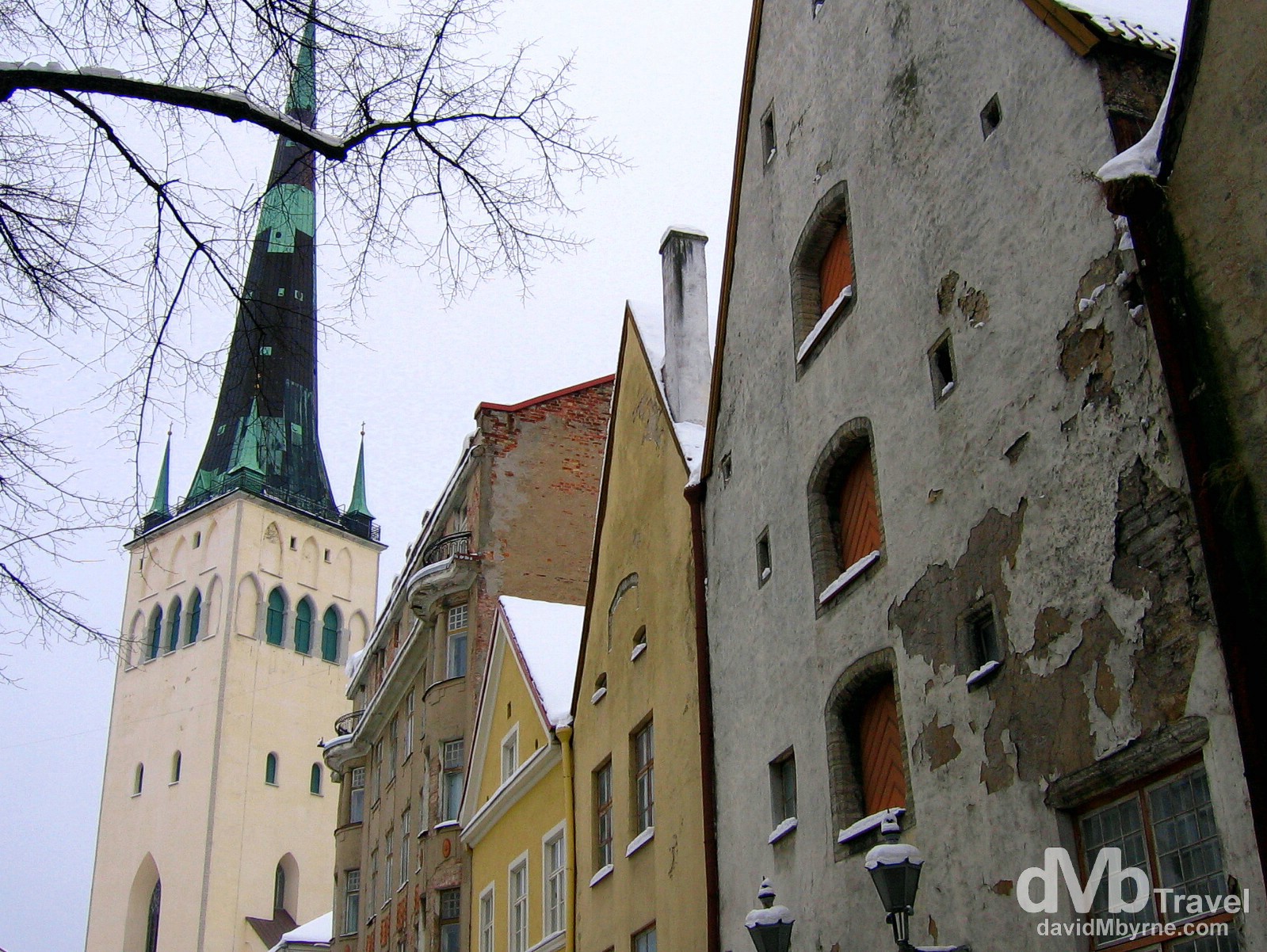 Buildings facades & the spire of the Oleviste Church in the Old Town of Tallinn, Estonia. March 2, 2006. 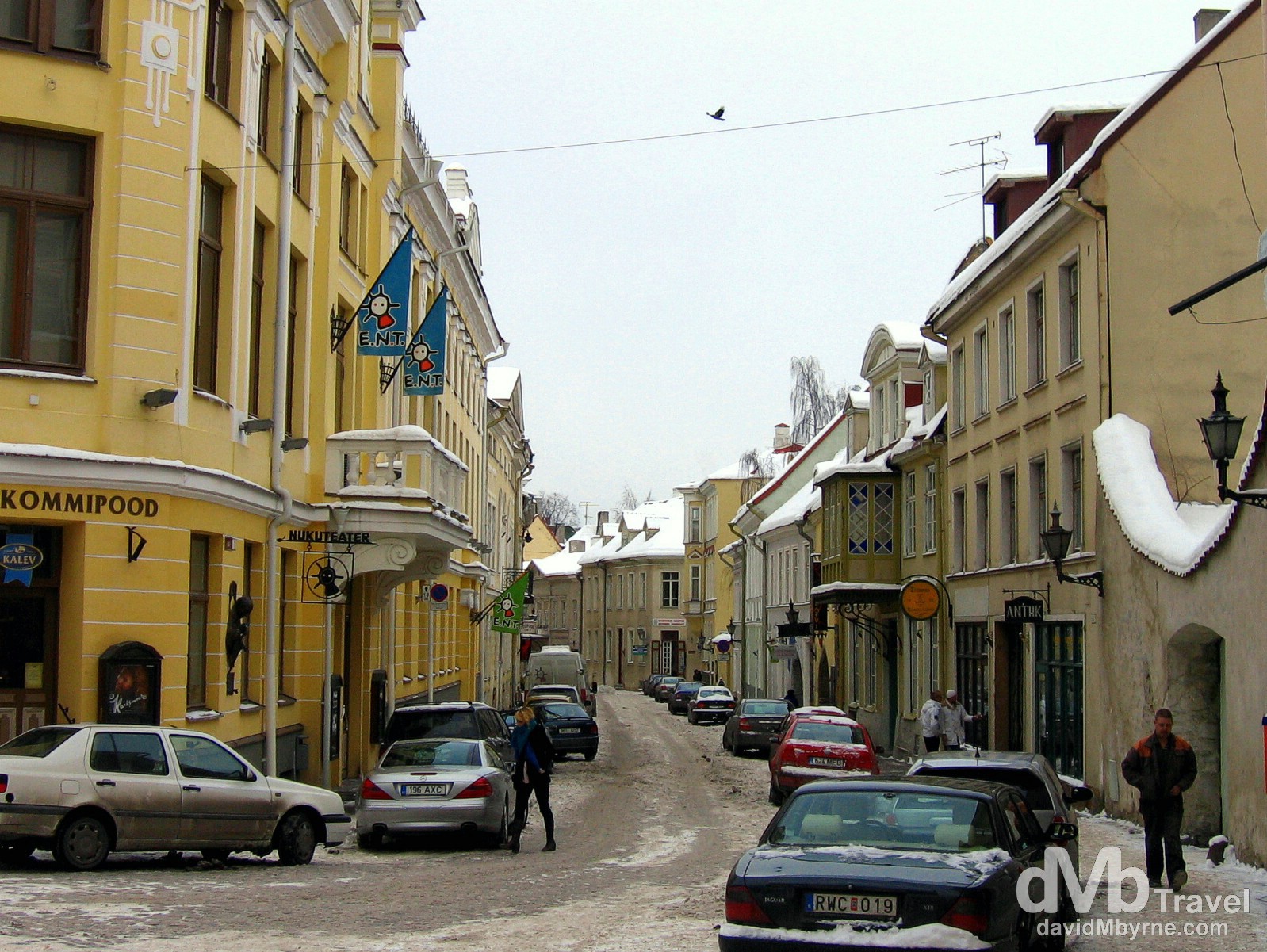 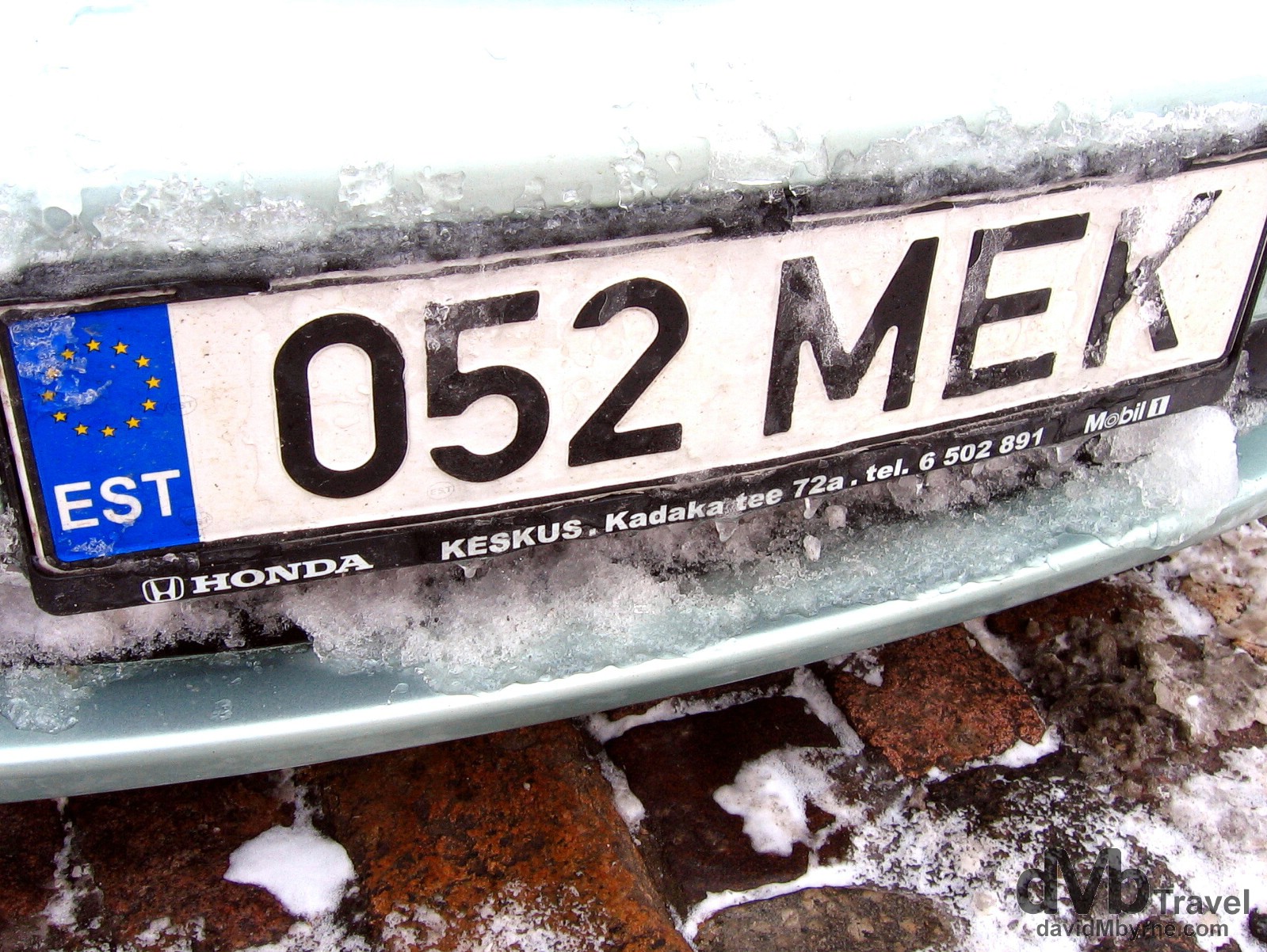 While the Estonian economy may have a way to go yet to reach European averages, the country certainly doesn’t seem to be the poor working-class EU cousin I’d imagined it to be, not as seen from street level in Tallinn’s Old Town – there were more than a few high-end cars on the streets & judging by the cranes visible in all directions it’s obvious the country is in the grip of a building boom. True, Estonia still remains one of the poorest countries in the EU, with incomes half of the European average, but it’s also has one of the EU’s fastest growing economies. Debt levels have a long way to go before they reach those of wealthier European countries & Estonians are rightly feeling optimistic. On the icy streets of the Old Town of Tallinn, Estonia. March 2, 2006. 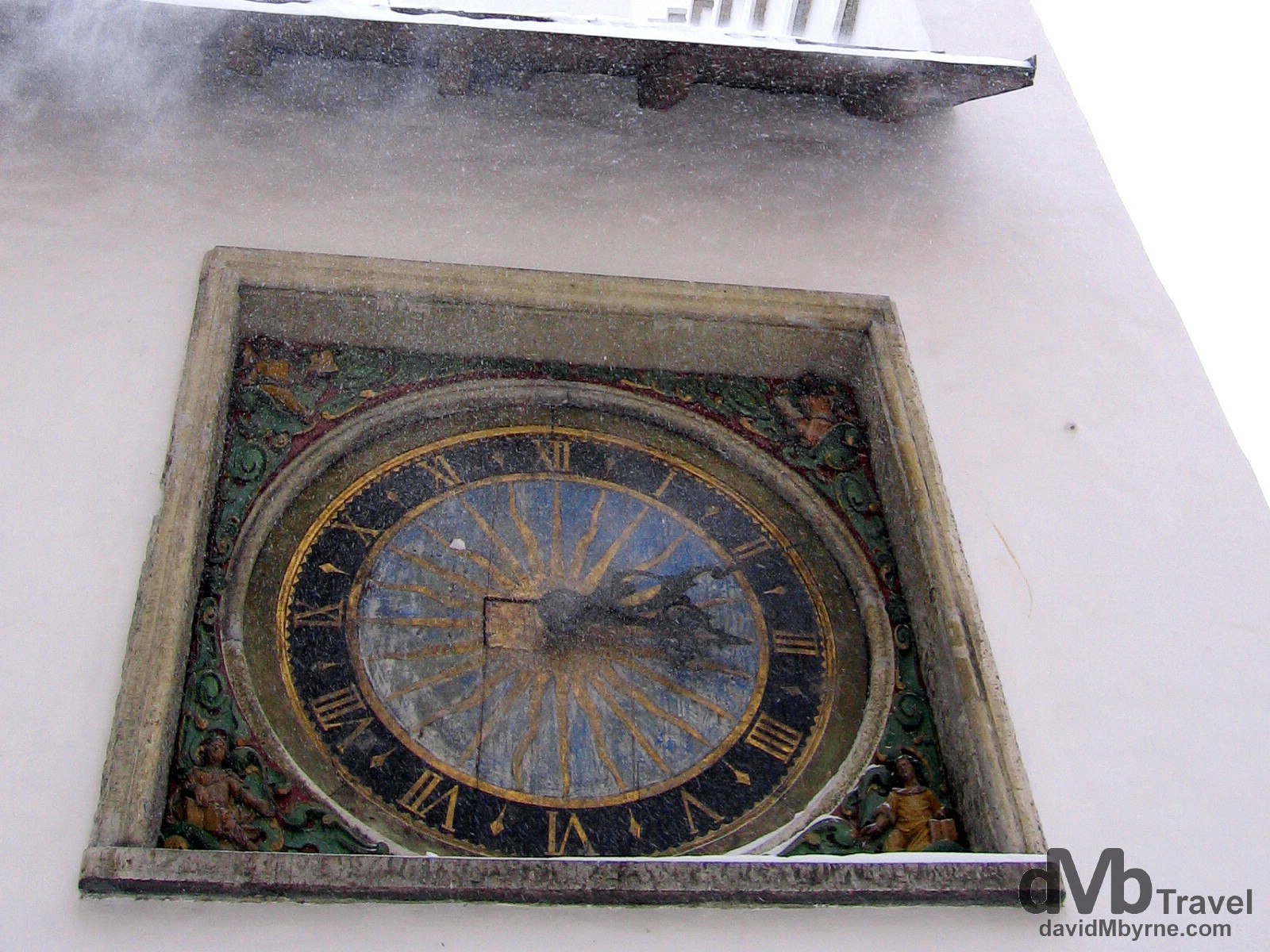 The clock in the external wall of the Lutheran Puhavaimu Kirik (Holy Spirit Church) in Old Town, Tallinn. Amid more snow squalls, I passed through the Old Town’s so-called White Bread Passage to get to this church, the main draw of which are the interior carvings (dating to 1684), the Bell Tower (dating to 1433) & this funky clock on the outside wall, the oldest timepiece Tallinn. Tallinn, Estonia. March 2, 2006.