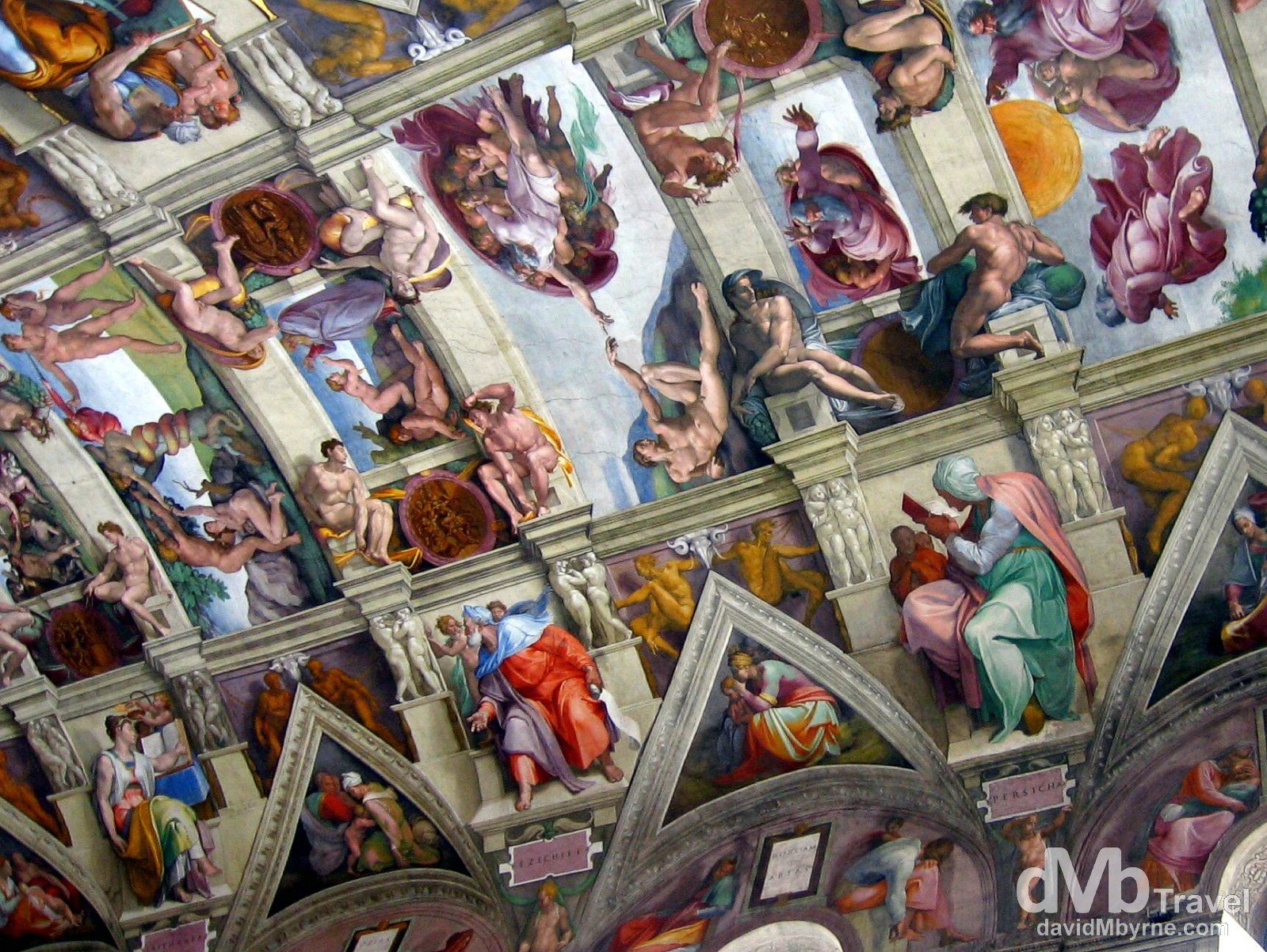 Vatican City, officially Vatican City State, is a landlocked sovereign city-state whose territory consists of a walled enclave within the city of Rome, Italy. It achieved sovereignty from Italy & the wider city of Rome in 1929 when the then Fascist Italian leader Mussolini granted a request from Pope Pius XI who didn’t want the Vatican to be seen to have an allegiance with any one country. It has a population of approximately 900 and boasts its own radio station, postal service and daily newspaper. At a mere 109 acres, it is the smallest independent nation in the world. But its diminutive size aside, it packs quite a punch with regard to must-see attractions, namely St. Peter’s Basilica, the greatest church in Christendom & the largest house of worship in the world, & the stunning but exhaustive complex that is the Vatican Museums, home to the famous Sistine Chapel. 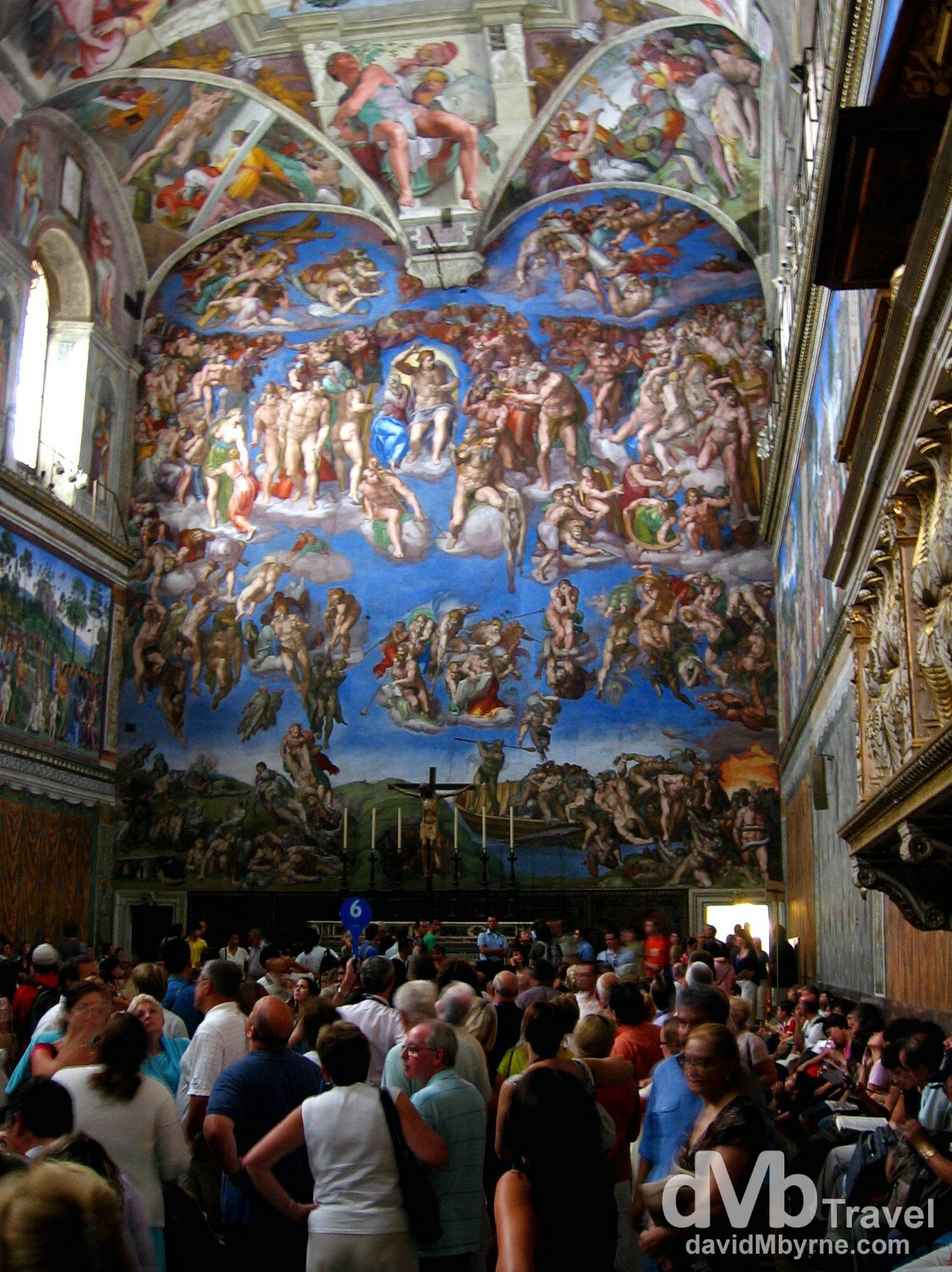 Michelangelo’s unmistakable fresco of The Last Judgement behind the altar of the Sistine Chapel, the highlight of a visit of the Vatican Museums for most. The chapel is a huge barn-like structure that serves as the Pope’s official private chapel and the scene of the conclaves of cardinals for the election of each new pontiff. The Sistine Chapel, Vatican Museums, Vatican City (

The Vatican Museums are simply the largest, richest, most compelling and perhaps most exhausting museum complex in the world. None other come even close. Over the years the various Popes have amassed an enormous collection of priceless booty, and with so many of the Renaissance’s finest artists working for the Popes of the day it is not surprising that the result is a set of museums stuffed with enough exhibits to put most other European collections to shame. As its name suggests, the complex actually holds a series of museums on very diverse subjects: classical statuary, Renaissance painting, Etruscan relics, Egyptian artefacts etc. The decoration and furnishings of the museum rooms themselves are splendid; most of them are painted, floor to ceiling in the most gorgeous and complex frescos.

The Sistine Chapel’s paintings of The Last Judgement and the ceiling frescoes (titled Creation) are probably the most viewed paintings in the world – it’s estimated that on an average day about 15,000 people trudge through here to take a look. The walls of the Sistine Chapel were decorated by several prominent painters of the Renaissance – Pinturicchio, Perugino, Botticelli and Ghirlandaio. Recently restored, they would be studied very closely anywhere else. As it is they are entirely overshadowed by Michelangelo’s more famous ceiling frescoes, frescoes that were commissioned in 1508 by Pope Julius II, an avid collector and patron of the arts who summoned to Rome the best artists and architects of the day. Michelangelo was assigned the task of decorating the Sistine Chapel, with work commencing at the height of the Renaissance in 1508. Oddly enough, Michelangelo hadn’t wanted to do the work at all: he considered himself a sculptor, not a painter, and was more eager to get on with carving Julius II’s tomb rather than painting the ceiling which he regarded as a chore. Regardless, he followed through with the task & devoted 4 years of his life to painting, single-handedly, the ceiling with scenes from the Old Testament.

Detail of a section of the Creation fresco on the ceiling of the Sistine Chapel with its most famous detail, The Creaton of Adam, seen in the centre of the picture. The image of the near-touching hands of God and Adam – illustrating the Biblical creation narrative from the Book of Genesis in which God breathes life into Adam, the first man – has become an iconic image of humanity and has been reproduced in countless imitations and parodies – it, along with Leonardo da Vinci’s Last Supper fresco in the Convent of Santa Maria delle Grazie, Milan, are said to be the most replicated religious paintings of all time. Frescoes on the ceiling of the Sistine Chapel, Vatican City. September 3rd, 2007 || From a September 2007 visit to Vatican City 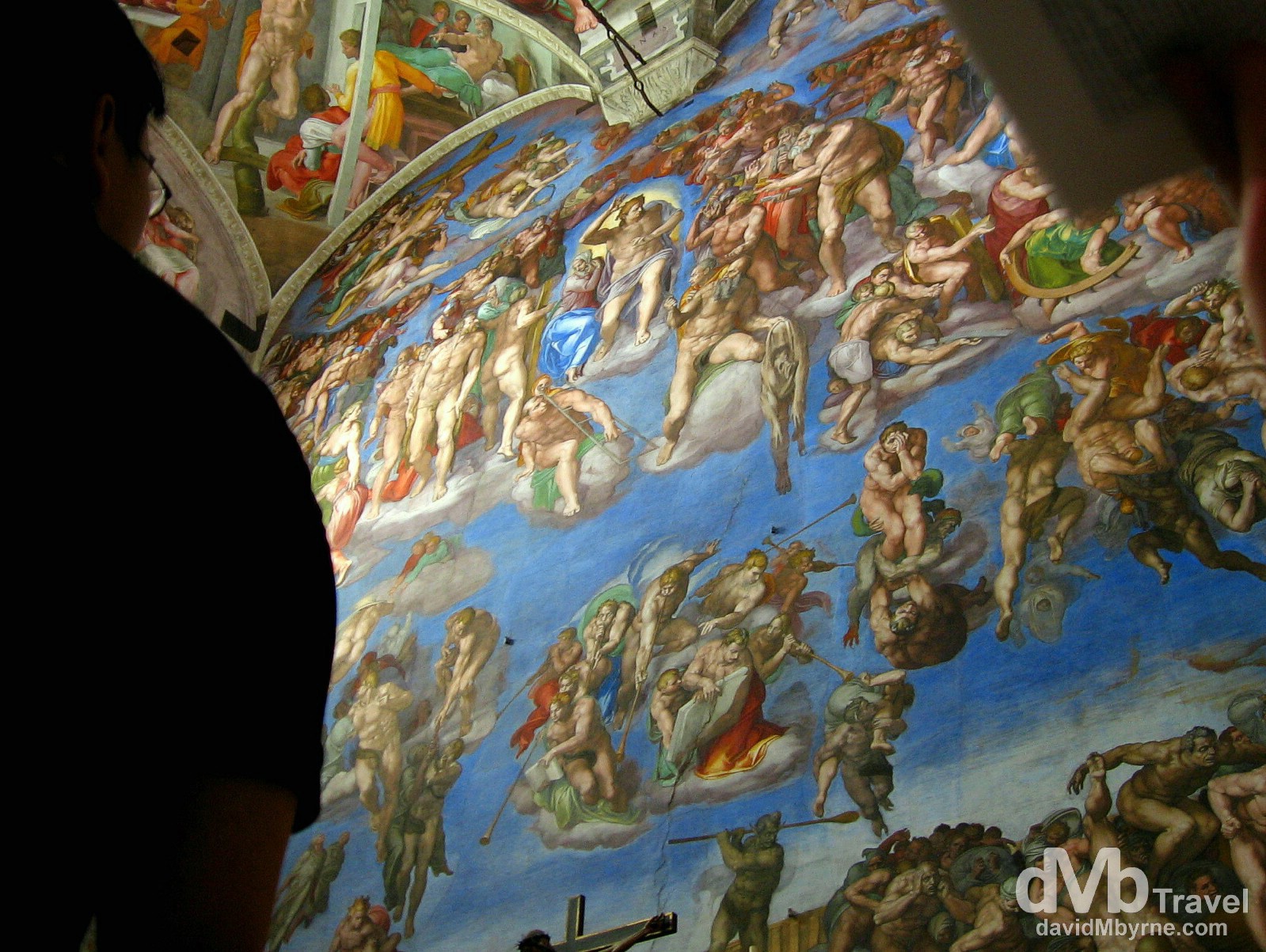 A closer look at The Sistine Chapel’s The Last Judgement fresco. Also painted by Michelangelo although more than twenty years after he painted the ceiling frescos. Just like the ceiling frescos, Michelangelo wasn’t especially keen to work on this project either but Pope Paul III, an old acquaintance, was eager to complete the decoration of the chapel and managed to convince him. The painting took five years, again single-handed, and is probably the most inspired and homogeneous large-scale painting you’re ever likely to see. The centre is occupied by Christ, turning angrily as he gestures the condemned to the underworld. St. Peter, carrying his gold and silver keys, looks on in astonishment (the hunched over man with the grey beard to Christ’s left), while Mary (directly to the right of Christ, blue dress) averts her eyes from the scene. Below Christ a group of angels blasts their trumpets to summon the dead from their sleep. On the left the dead awaken from their graves, tombs and sarcophagi and are levitating into the heavens or being pulled by ropes and the napes of their necks by angels who take them before Christ. At the bottom right, Charon, keeper of the underworld, swings his oar at the damned souls as they fall off the boat into the waiting gates of hell. The Sistine Chapel, Vatican City. September 3rd, 2007 || From a September 2007 visit to Vatican City