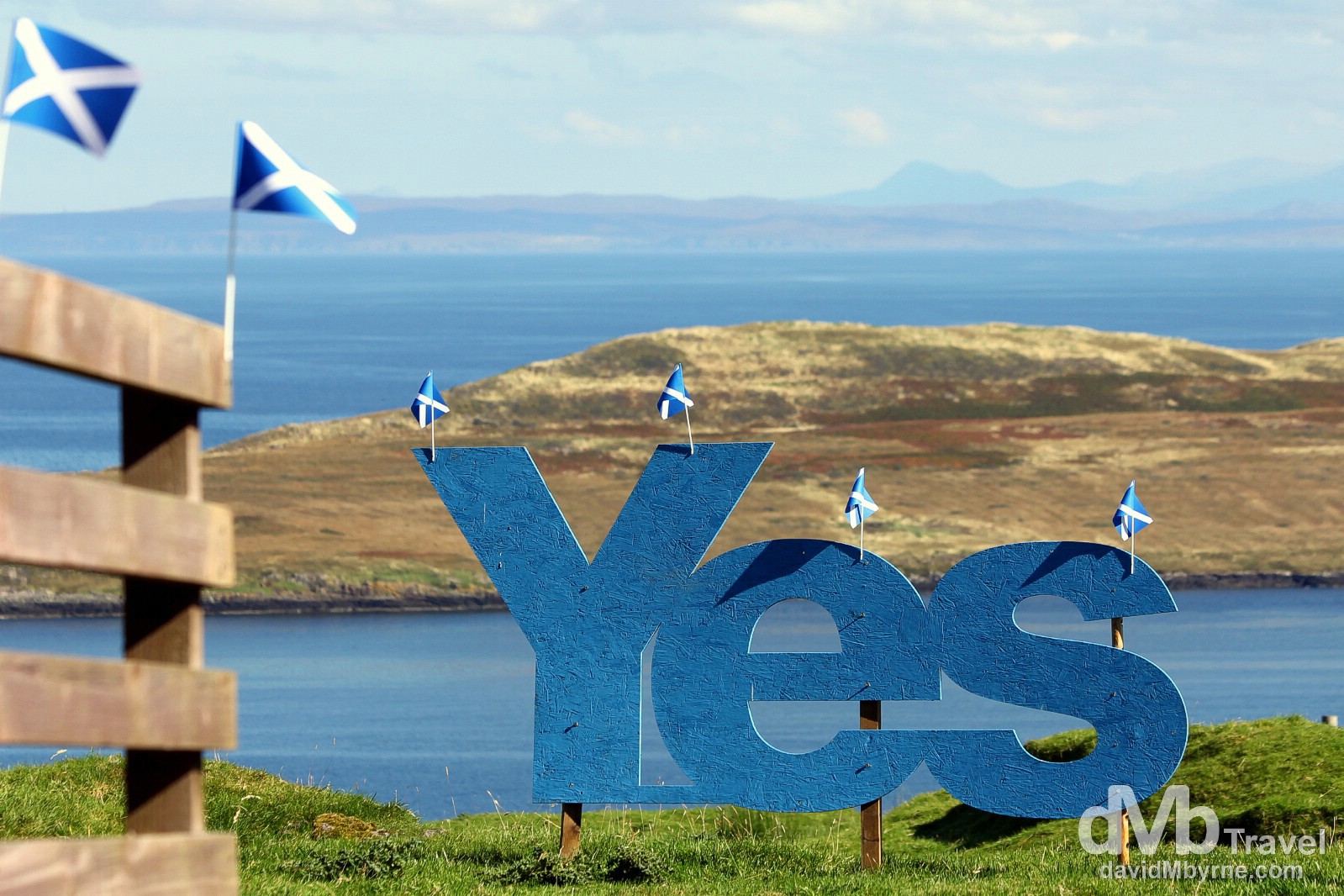 Even without the Scottish referendum for independence taking place, the road trip I’m presently enjoying in Scotland would have been memorable. But being here & travelling around the country during this momentous time in Scottish history has just enhanced the whole experience.

Unprecedented
This referendum is unprecedented. Scotland has never seen anything like it and isn’t likely to ever again. It has the whole country transfixed, a country, if you believe the polls, that’s evenly divided into ‘Yes’ & ‘No’ camps, both of which believe their cause is the right one for the betterment of their country. Every road trip radio station listened to & every hotel news channel watched over the last 9 days have all had blanket coverage of the referendum. A whopping 97% of the 4.2 million Scottish electorate have registered to vote & for the first time ever 16 & 17-year-old Scots are given a vote. Given a voice. Again, this is unprecedented. 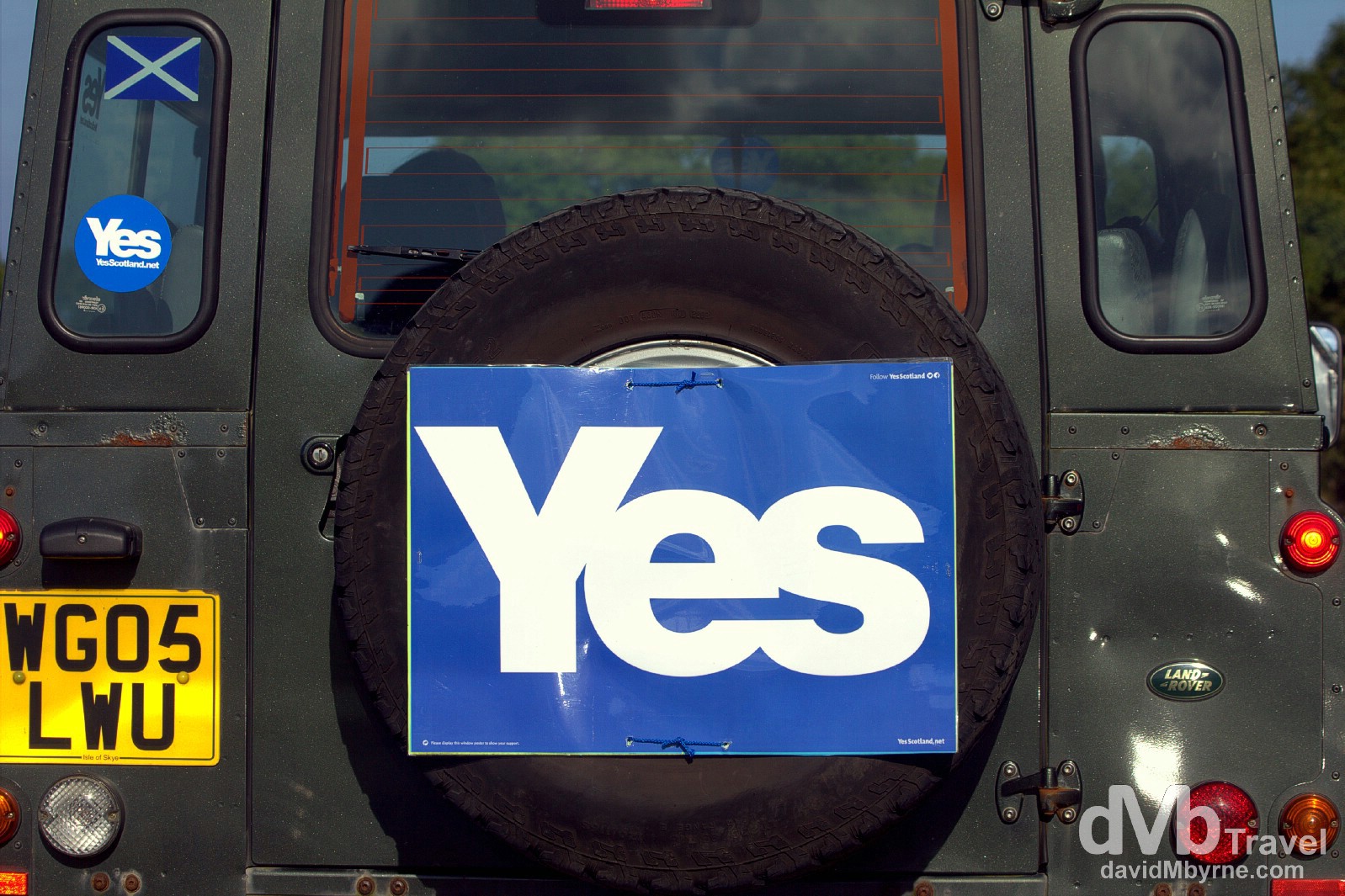 I haven’t spoken to any Scots about their feelings but I did hear the barmaid at my hotel last night in Fort William commenting that she was voting ‘No’ before going on to justify her choice by saying she believed ‘we’re better together’. People who are paid to predict such things can’t call the outcome of this referendum so I’m not going to try. But if the effort put forth by the respective campaign teams is any indication then the ‘Yes’ campaign has it in a landslide, something the outcome was never likely to be. The country – & I’ve seen a lot of it driving north to south over the past 9 days – is awash with the simple message of ‘Yes’. Houses, cars, roadsides, hillsides, & even remote headlands are all decorated with signs, placards, banners, flags etc. The blue/white ‘Yes’ text on a blue/white background signs are everywhere. One thing is for sure – if the ‘Yes’ campaign loses then it won’t be for lack of effort. 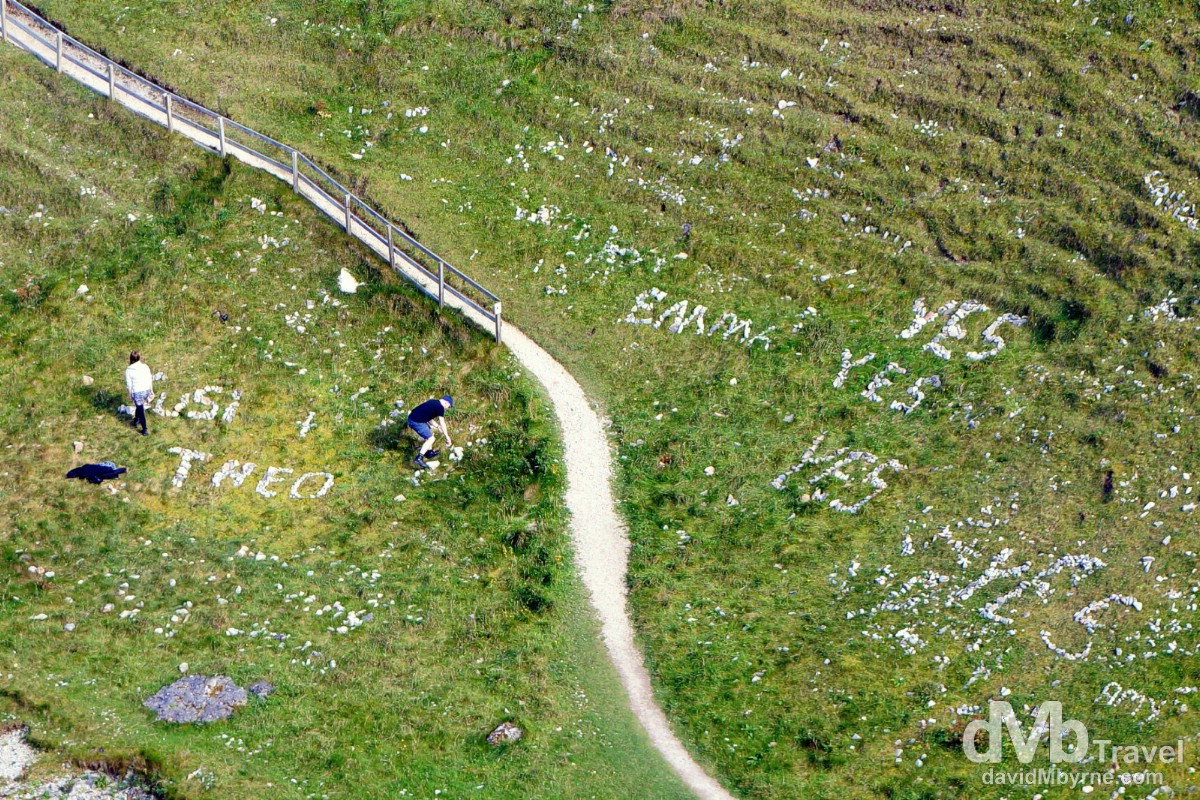 Emma says ‘Yes’. Outside the entrance to Smoo Cave (

In contrast, the ‘No’ campaign has been absent. Invisible almost. I can probably count on one hand (OK, maybe two) the ‘No Thanks’ signs I’ve seen over the last 9 days. And unlike the very visible ‘Yes’ campaigners, I have not seen one ‘No’ campaigner on the streets of any Scottish town. It all leaves me wondering how the ‘No’ campaign can, and as all polls have predicted, be consistently ahead. One thing is for sure – if the ‘No’ campaign win then it will be in spite of a visible lack of effort. 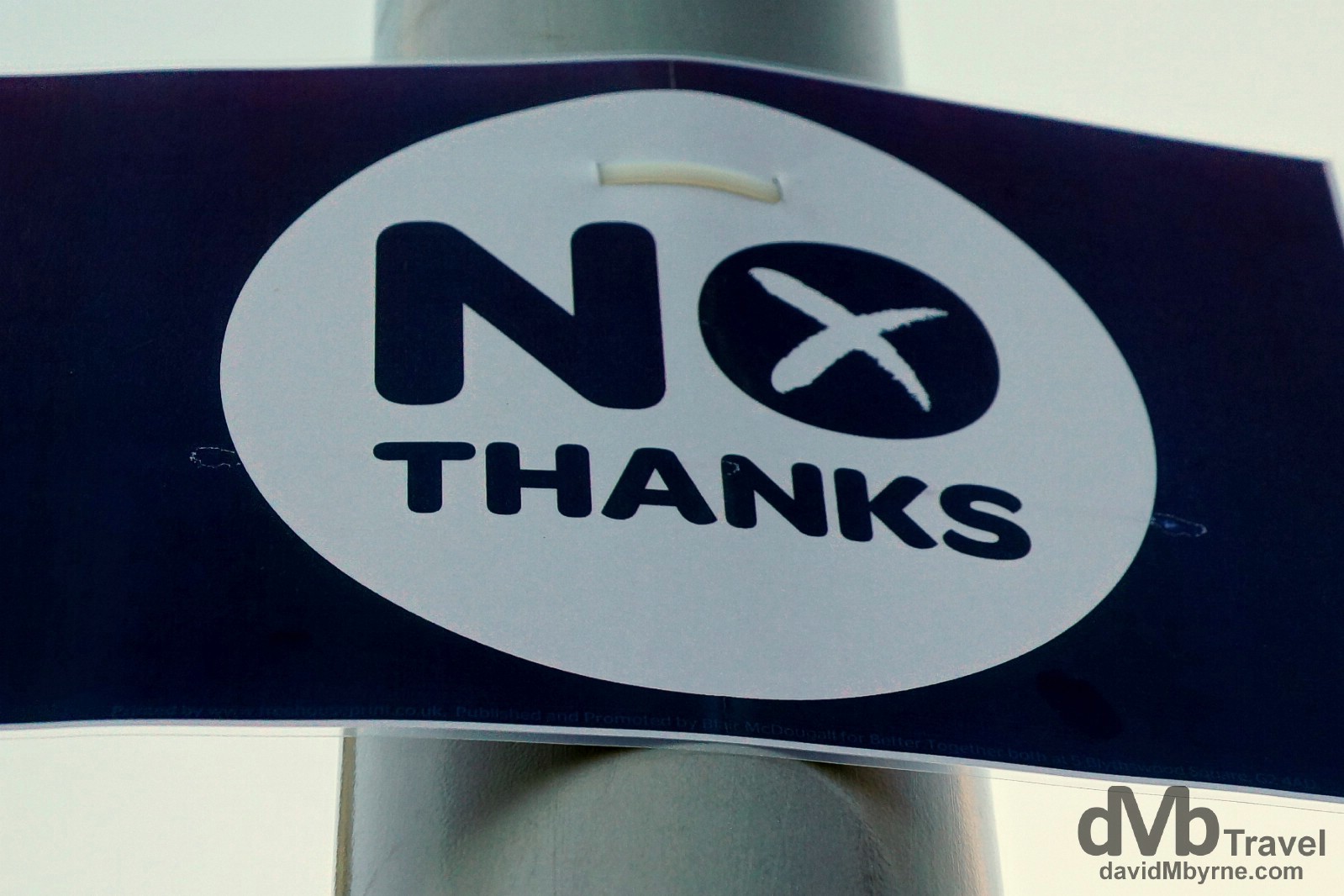 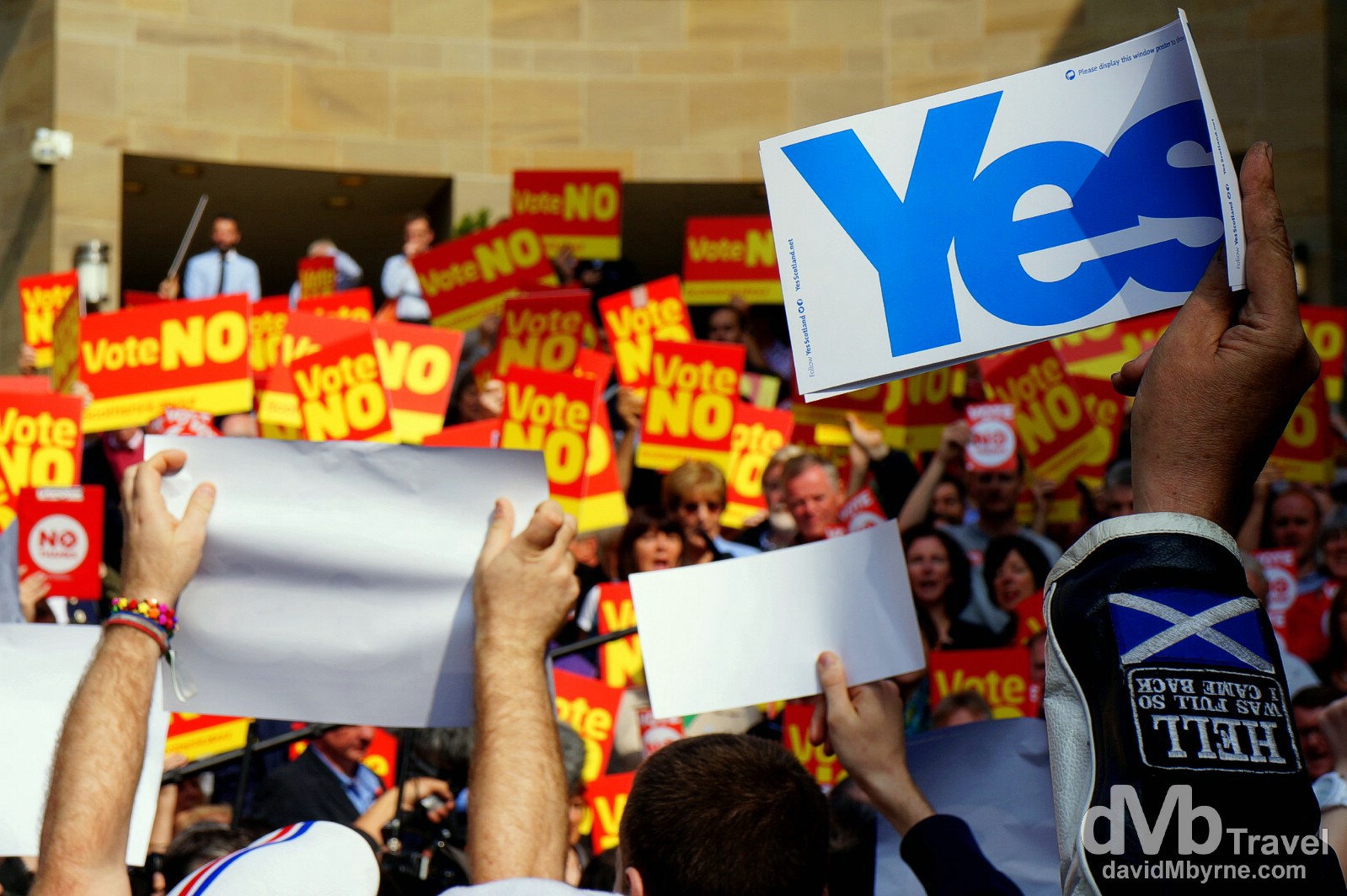 About the only noise I’ve heard from the No campaign was when I stumbled upon this rally on the steps of The Royal Concert Hall in Glasgow. A few heavy hitters were in attendance, including the ex Home Secretary Jack Straw, who I saw, & Labour Leader Ed Miliband, who I didn’t (although I did see him on the news later that evening). Glasgow, Scotland. September 11, 2014.

Is Scotland ready for a ‘Yes’? Is it ready to go it alone, to embark on a new chapter of its storied past? Is it ready to be the world’s newest independent state? Is it ready to end the 307-year-old union with England, the old enemy? Or has the fear of change, the fear of the unknown, coupled with the scaremongering threats – higher prices for goods & services, relocation south of the border by retail giants etc. – & David Cameron’s somewhat desperate plea to keep the union intact together with promises of more Scottish power over their own affairs as part of an improved union, has all that been enough to ensure the status quo? Tonight, as I sit in Irvive (

), southwest of Glasgow, 1 hour after the polling stations have closed, decision has been made. We just have to wait for the result, wait to see if Great Britain is still great & if the United Kingdom is still united.