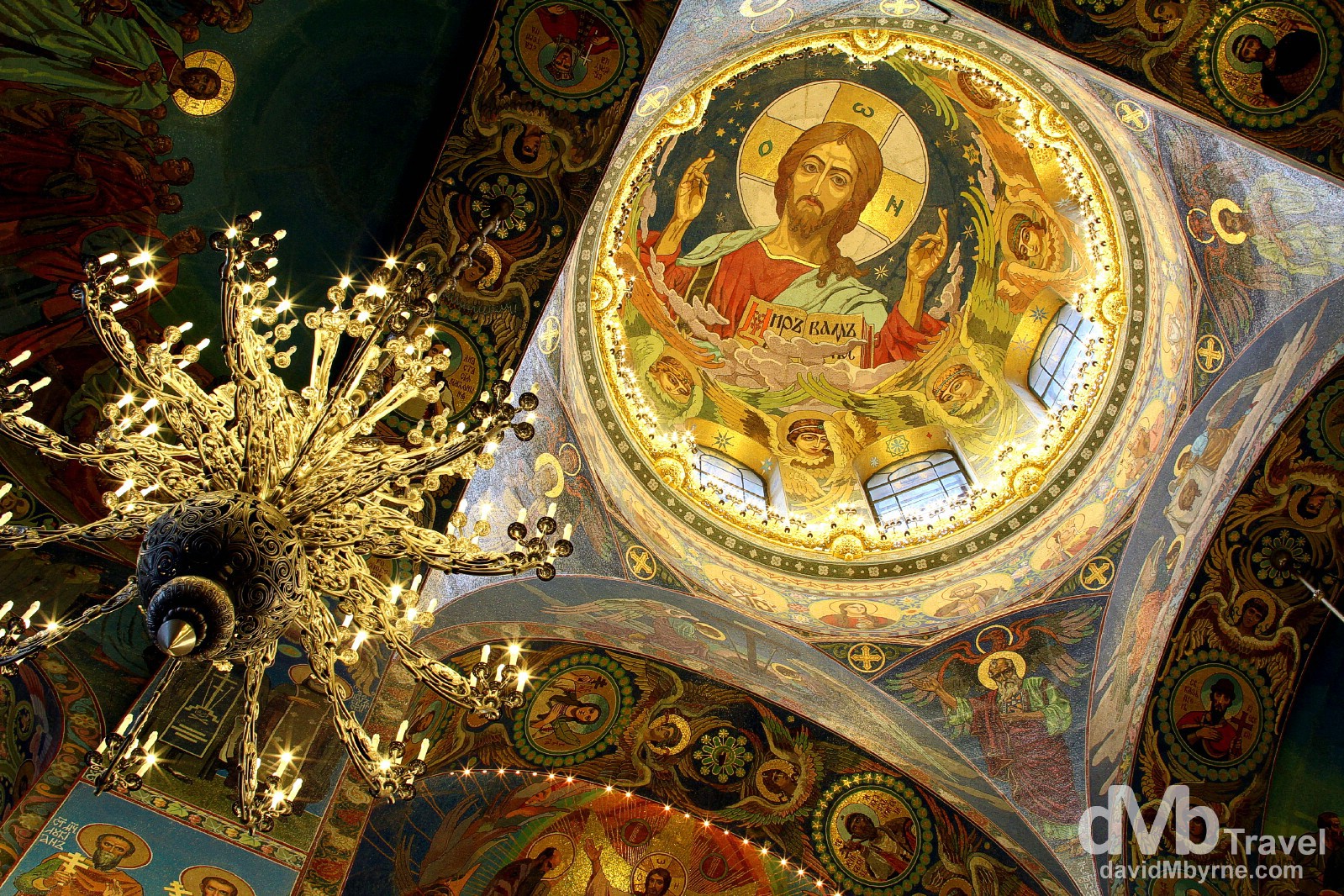 It doesn’t take long to realise that Saint Petersburg is a Russian anomaly – visually very different from any other Russian city. Whereas most of the rest of them are full of dull, unimaginative, boxy, typically-Soviet structures, Saint Petersburg, the so-called Venice of the North, is a fairytale city of incredible weathered architecture complete with canals, baroque palaces, cathedrals and buildings made from pink granite with yellow & green façades. 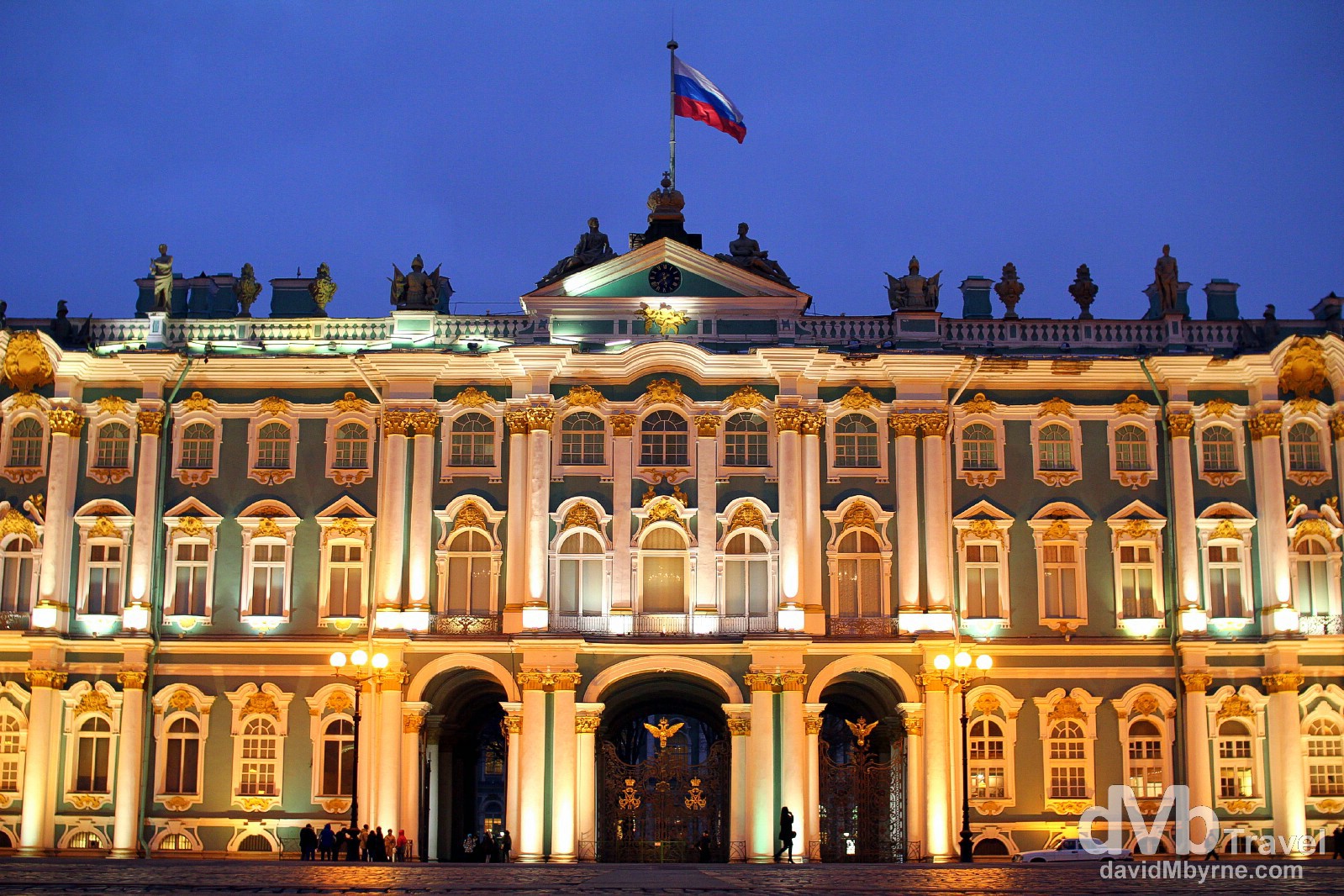 A section of the imposing façade of The Winter Palace in Palace Square, Saint Petersburg (

Saint Petersburg was founded by Peter the Great, the then ruling tsar, in 1703 and built on a mosquito-infested swamp at the mouth of the Neva River on the shores of the Gulf of Finland. Peter hated Moscow and wanted to create a modern capital for a country that he deemed to be stuck in the Dark Ages. Military scuffles with Sweden meant Peter had thousands of Swedish prisoners of war at his disposal. He put them to work and soon he had succeeded in creating his dream. In 1713 the city became the nation’s capital and it remained the heart of the country until the 1917 revolution ended the Russian dynasty – the victorious communists then moved the capital back to the more easily defensible Moscow in 1918.

Russian Revival
For the next 80 or so years the city was more or less ignored by Moscow and many of its buildings went into disrepair. But with local boy Vladimir Putin now pulling the shots in Moscow, the city and its neglected buildings have profited from central funding, meaning today UNESCO-listed Saint Petersburg, Europe’s 4th largest city, is one of the most enchanting and impressive cities on earth.

The ‘Venice of the North’, with its numerous canals and more than 400 bridges, is the result of a vast urban project begun in 1703 under Peter the Great. Later known as Leningrad (in the former USSR), the city is closely associated with the October Revolution. Its architectural heritage reconciles the very different Baroque and pure neoclassical styles, as can be seen in the Admiralty, the Winter Palace, the Marble Palace and the Hermitage. 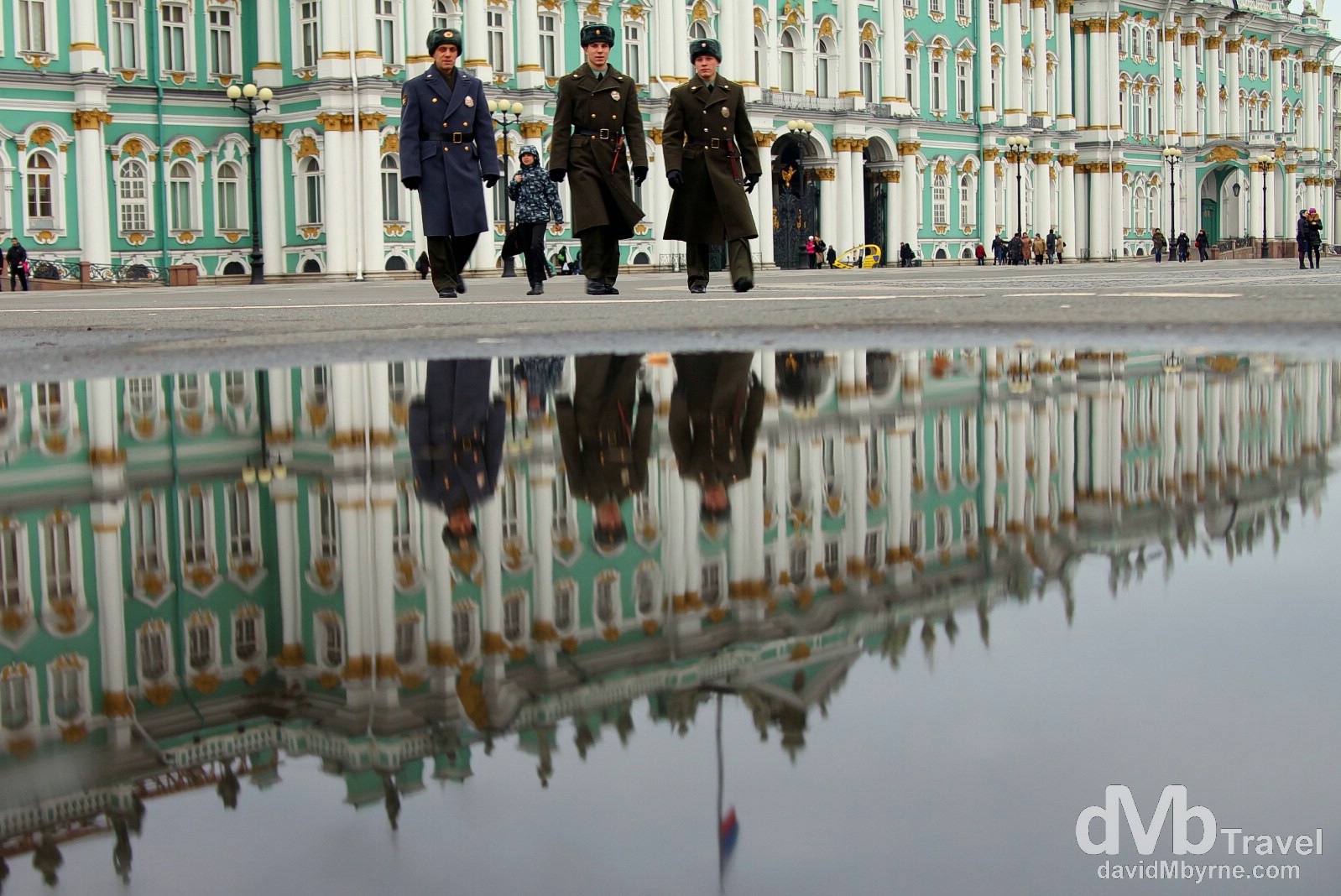 Reflections in Palace Square. Gimmie a reflection and I’ll play with it. Throw into the mix something like the stunning façade of Saint Petersburg’s Winter Palace and you’ve potentially got something special. The elongated rectangular-shaped green-and-white palace has a 250-metre-long, 30-metre-high façade fronting the expansive Palace Square in the UNESCO World Heritage listed historic centre of the city. The official residence of Russian monarchs from 1732 until 1917, it was built almost continuously between the late 1730s and 1837 to a monumental scale that was intended to reflect the might and power of Imperial Russia – it has no less than 1,945 windows & 1,786 doors in 1,057 halls and rooms. The Palace is now part of a complex of buildings known as the State Hermitage Museum, a world-famous museum which holds one of the world’s greatest collections of sculptures, paintings and historic artefacts. Palace Square, Saint Petersburg, Russia. November 21st 2012 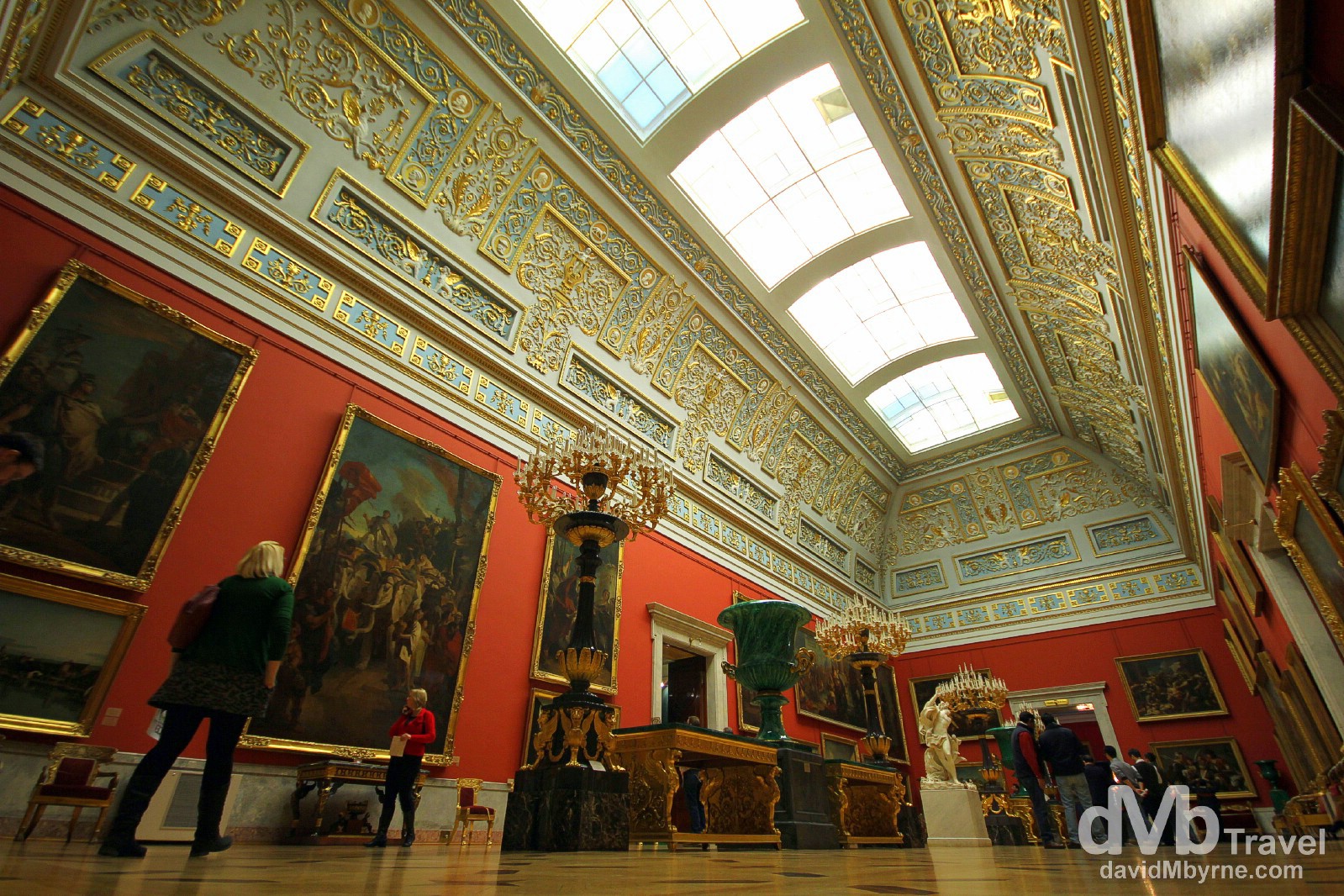 A section of the Hermitage Museum in the Winter Palace. The museum, one of the world’s premier museums, owns more than 2.5 million works of art spread across almost 1,000 of the Winter Palaces aforementioned 1,057 rooms. I’d been to Saint Petersburg before back in 2006 and on that occasion I didn’t visit the Hermitage. Needless to say I did this time around. Seemingly it takes about 2 lifetimes to see all the museum has to offer. I didn’t have such time at my disposal but I did set aside a whole day which proved sufficient for me to take a good look around (as I’d imagine it would be for most mortals). The Hermitage Museum in the Winter Palace, Saint Petersburg, Russia. November 22nd 2012. 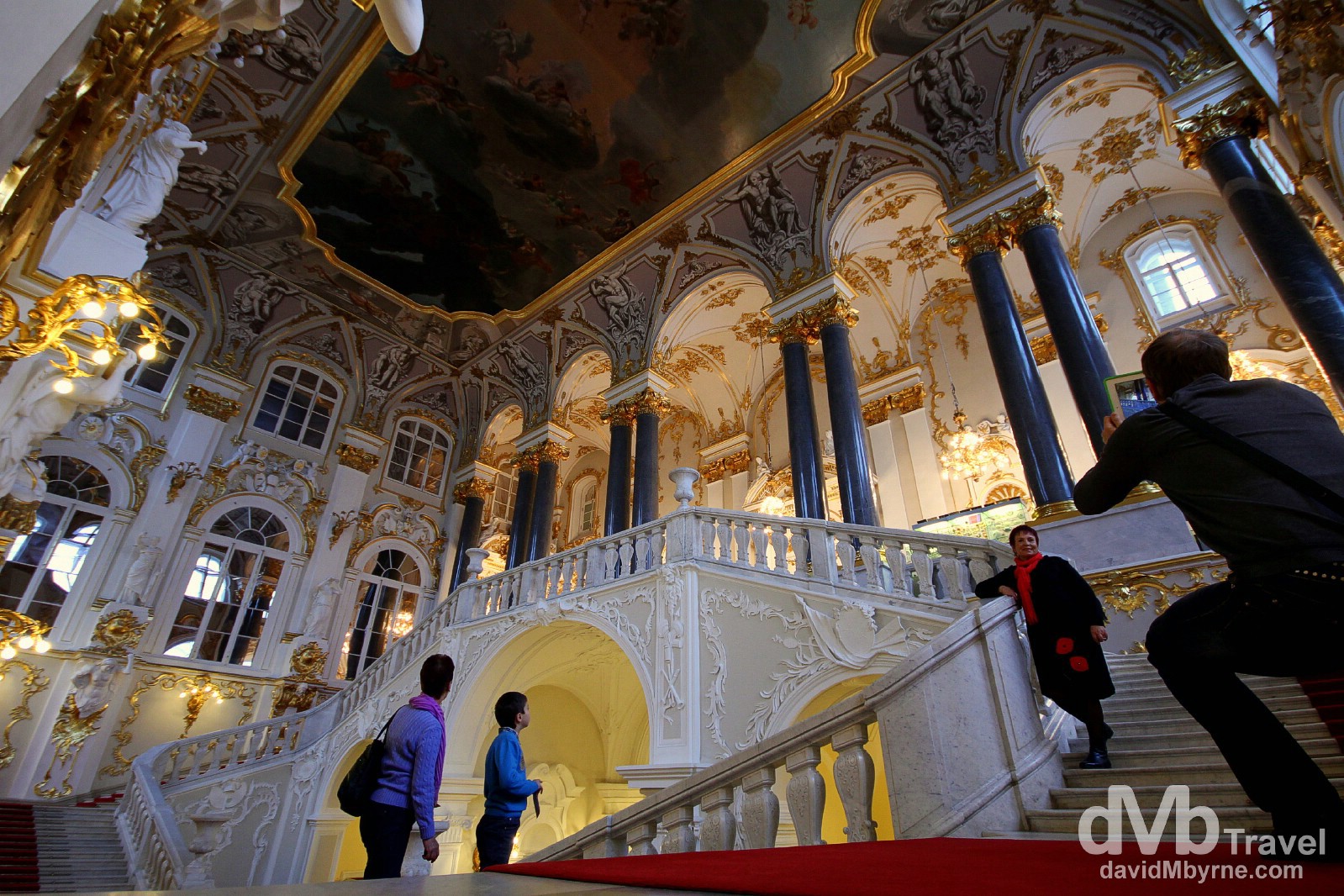 People on the Jordan Staircase of the Winter Palace, the visual highlight of a trip to the Hermitage Museum (& that’s saying something). The opulent marble staircase has no less than 10 blue, solid-granite columns supporting it and is lined with Italian sculptures. It’s all very grand, very over-the-top, & as one of the first attractions visitors to the museum lay their eyes on, it serves as a great introduction to the opulence that follows. The Winter Palace, Saint Petersburg, Russia. November 22nd 2012

Church on Spilled Blood || A Museum of Mosaics 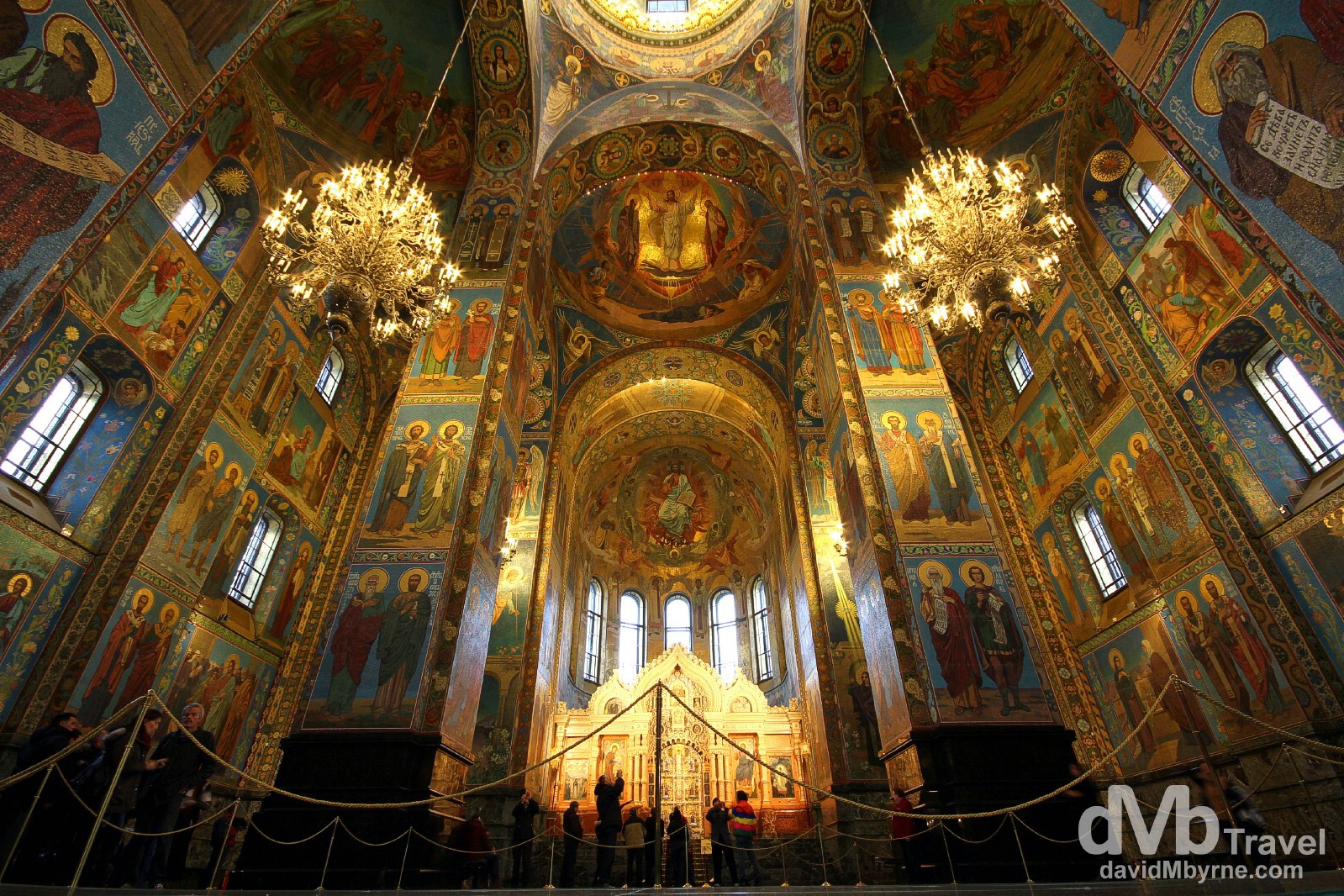 The impressive interior of the Cathedral of the Resurrection of Christ. Unless the ferry I’ll be taking to Finland in a few hours time is a bit more photogenic than I expect it to be, then this & the following pictures will be my last from this, my second visit to Saint Petersburg (& Russia itself). The Cathedral of the Resurrection of Christ, better known as the Church on Spilled Blood (it was built on the site of the assassination of Tsar Nicholas II in 1881), is one of the main tourist draws in the city. Started in 1883 and completed in 1907, it was closed in 1930 by the Soviet government, used as a morgue during the WWII siege of the city & as a storage facility after the war. Ownership changed hands in 1970 and after 27 years of restoration work it reopened its door in 1997 (it is known as the church that took 24 years to build and 27 years to restore). However, it has not been reconsecrated, meaning no religious ceremonies take place here so today its sole purpose is a museum of mosaics – the walls are completely covered in intricately detail with some 7,500 sq. metres of stunning mosaics. It’s quite the sight. The Cathedral of the Resurrection of Christ, aka the Church on Spilled Blood, Saint Petersburg, Russia. November 23rd 2012.

A section of the high ceiling of the Cathedral of the Resurrection of Christ, a.k.a. the Church on Spilled Blood, in Saint Petersburg, Russia. November 23rd 2012.