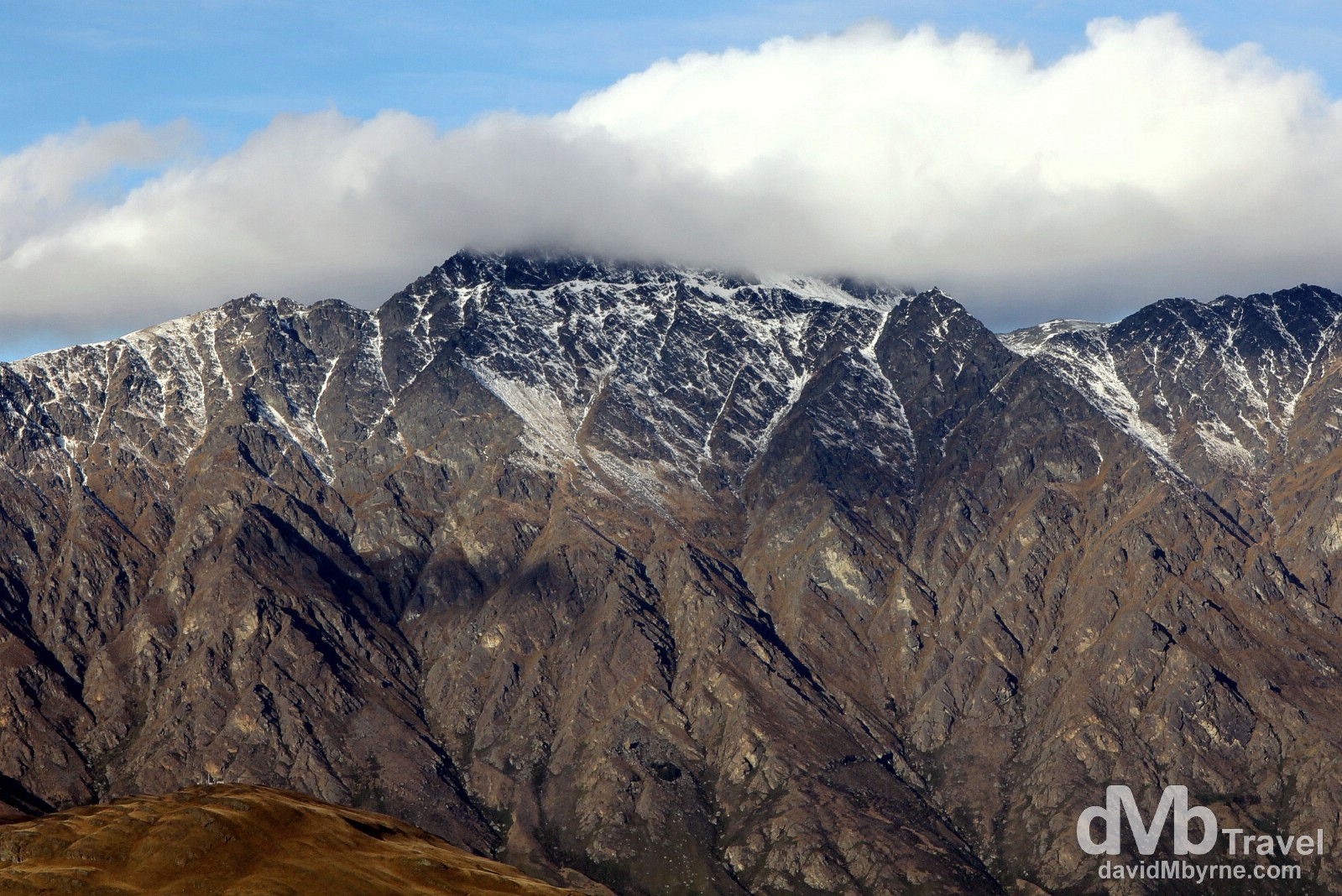 Surrounded by majestic mountains & nestled on the shores of crystal clear Lake Wakatipu, Queenstown on New Zealand’s South Island boasts one of the most stunning natural locations in the world. 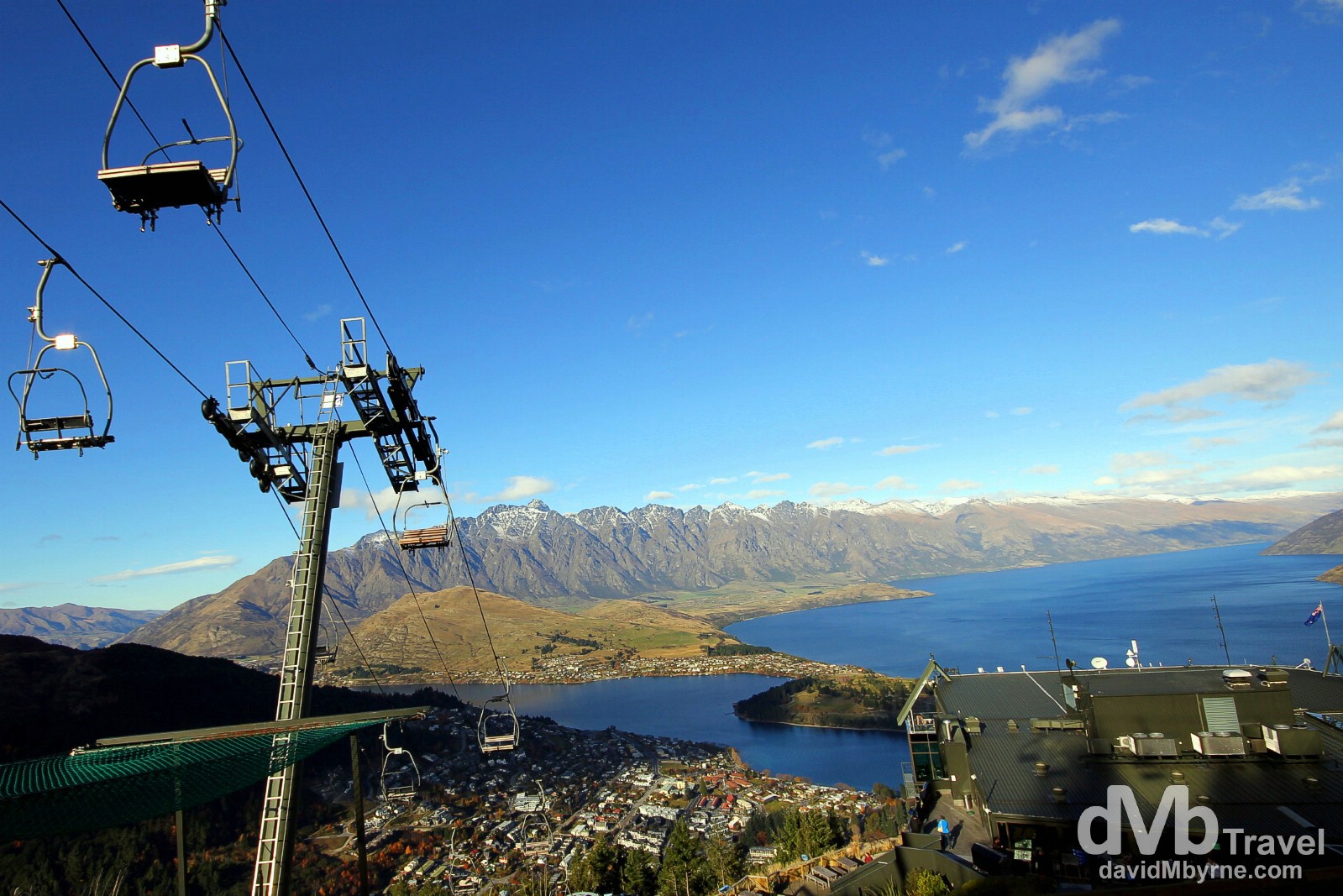 ). As a location Queenstown needs no introduction to those on the traveller circuit – it has a well-earned reputation as the southern hemisphere’s premier adventure destination, thanks in no small part to the opening of the world’s first permanent commercial bungee site, the Kawarau Bridge Bungy, just outside Queenstown in 1988 by the entrepreneur AJ Hackett. The above picture is a late afternoon wide-angle picture from Bob’s Peak, a steep hill overlooking Queenstown with great views of Lake Wakatipu & The Remarkabales mountain range. The Gondola seen here first opened in 1967 & is used to transport passengers from the green Skyline complex seen in the bottom-right of the image to the top of a small luge track. It also extends beyond the Skyline complex down to street level but I found the 40-minute hike up the hill though pine forest a much more rewarding endeavour than paying the $25 round-trip fare, something I did last time I was in Queenstown back in 2003. Queenstown, South Island, New Zealand. May 23rd 2012. 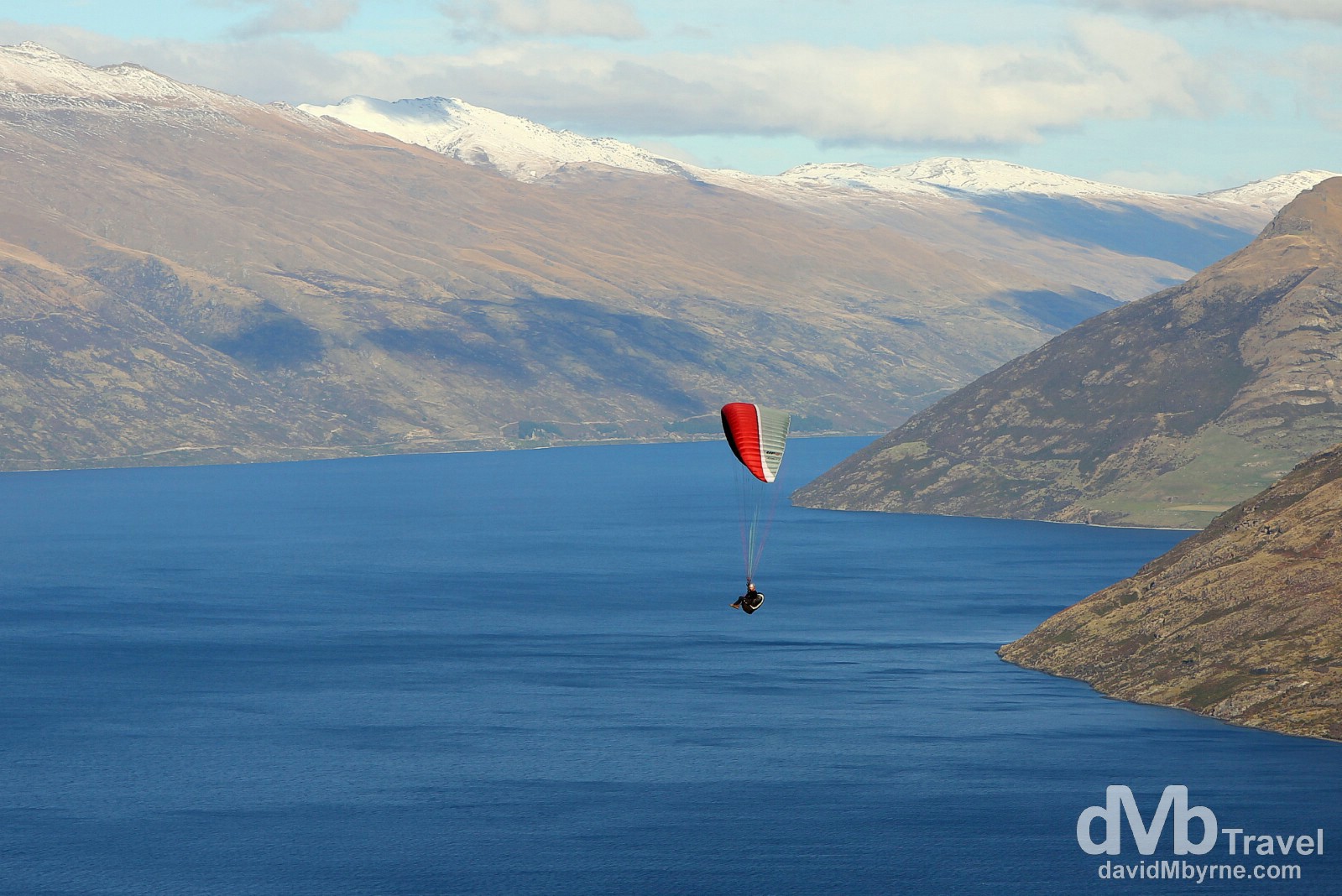 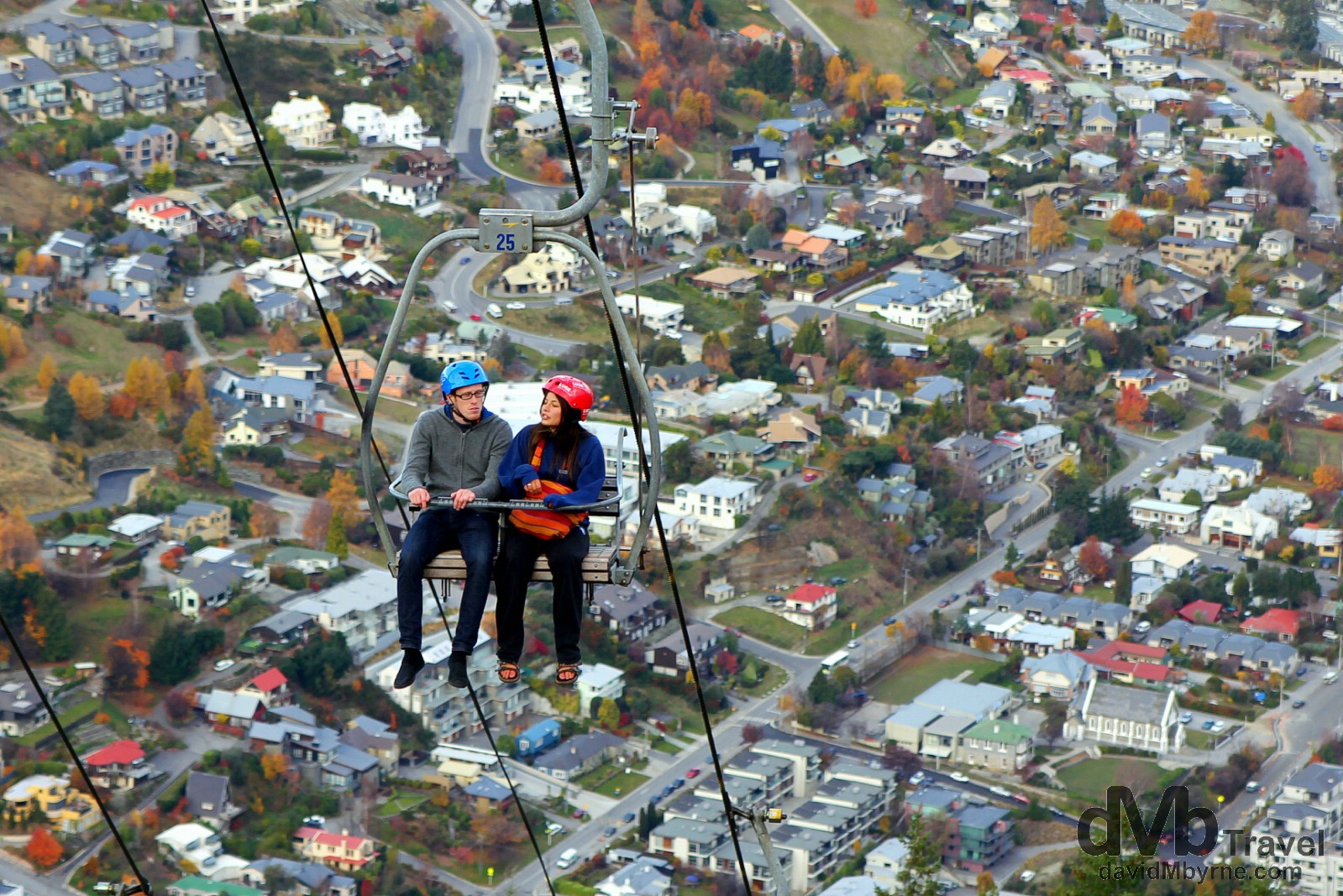 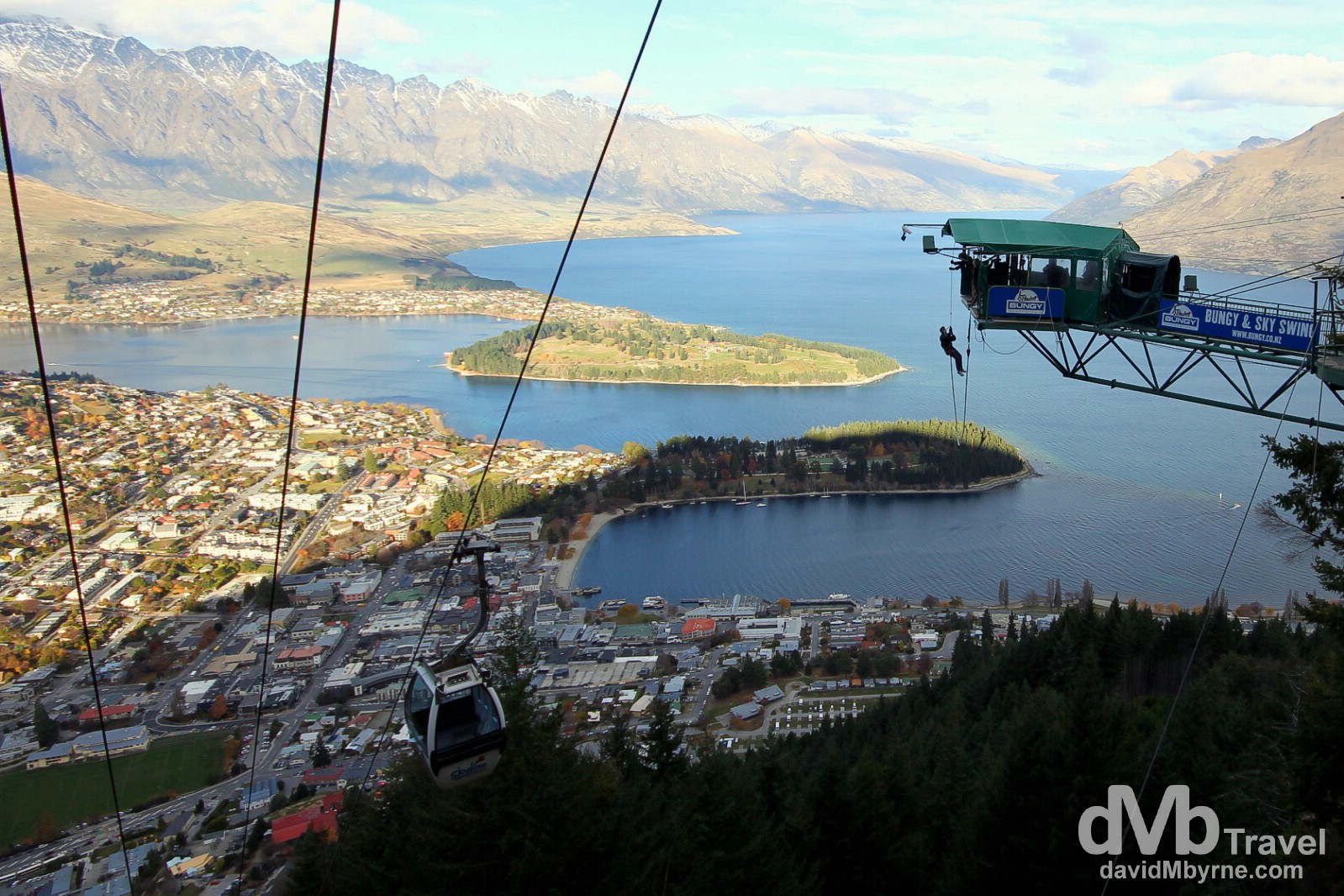 When I was here in last in 2003 I felt the need to throw myself from the bungy platform seen here, The Ledge, a cantilevered bridge that juts out from the rocks situated 400 metres above Queenstown. Not so this time. This time I went for the 134-metre high Nevis Highwire instead which is still, & as it was back in 2003, New Zealand’s highest bungy. Queenstown & The Ledge bungy as see from The Skyline overlooking Queenstown, South Island, New Zealand. May 23rd 2012. 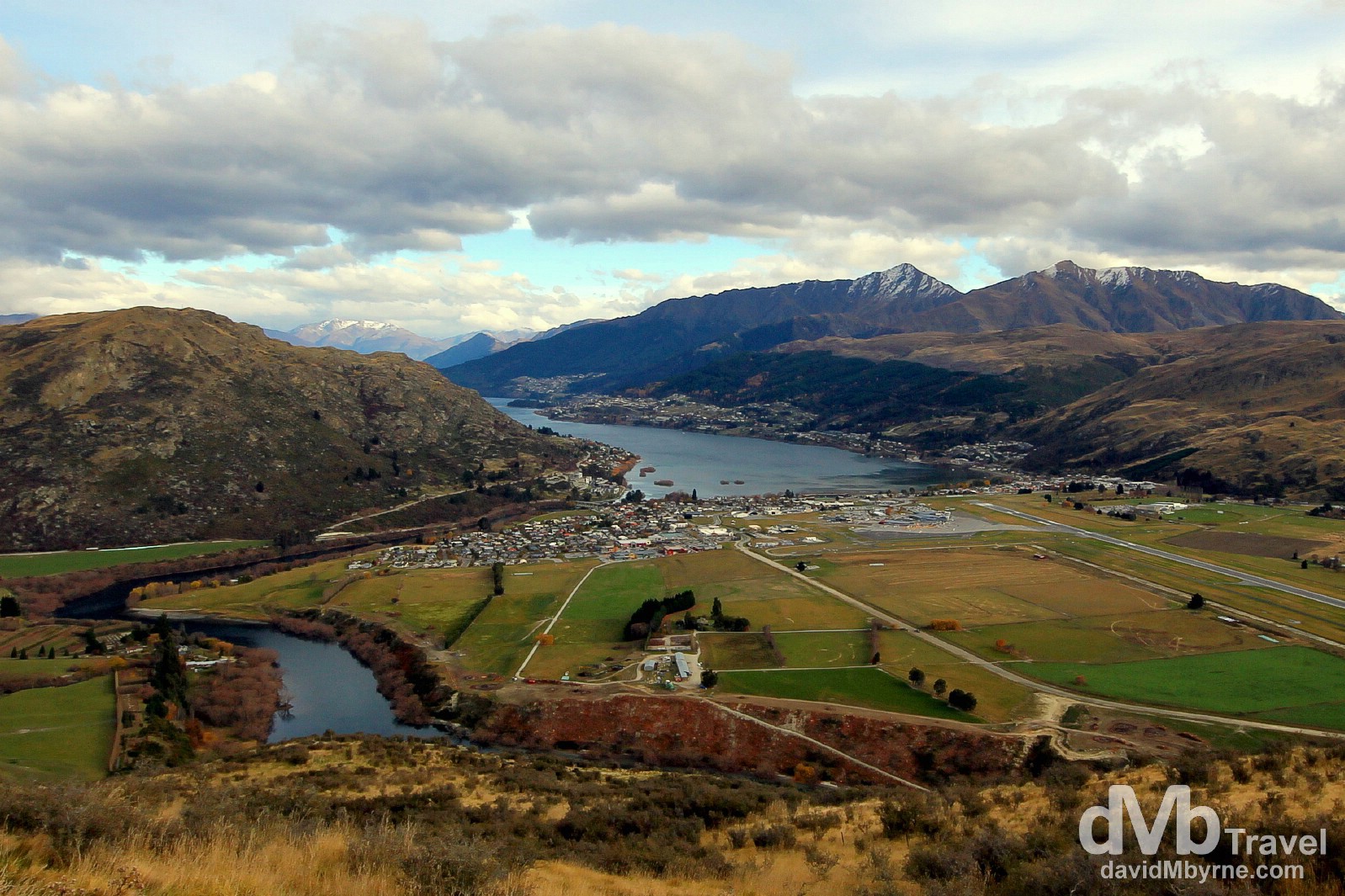 One of the last things I did in Queenstown was to drive to the windy, dusty Remarkables Ski Field road to get this picture looking back towards Frankton & Queenstown – Queenstown International Airport in Frankton, the area’s air hub, can be seen to the right of the picture. It’s late May now and the winter snow is still over a month away. When it arrives so will the plane loads of skiers meaning the deserted road I drove to get to this location will be busier than it was today, full with skiers make their way to the nearby pistes, some of New Zealand’s most popular runs. All of this makes Queenstown one of the country’s most popular apres ski towns, a tag it wears well. Outside Queenstown, South Island, New Zealand. May 24th 2012.