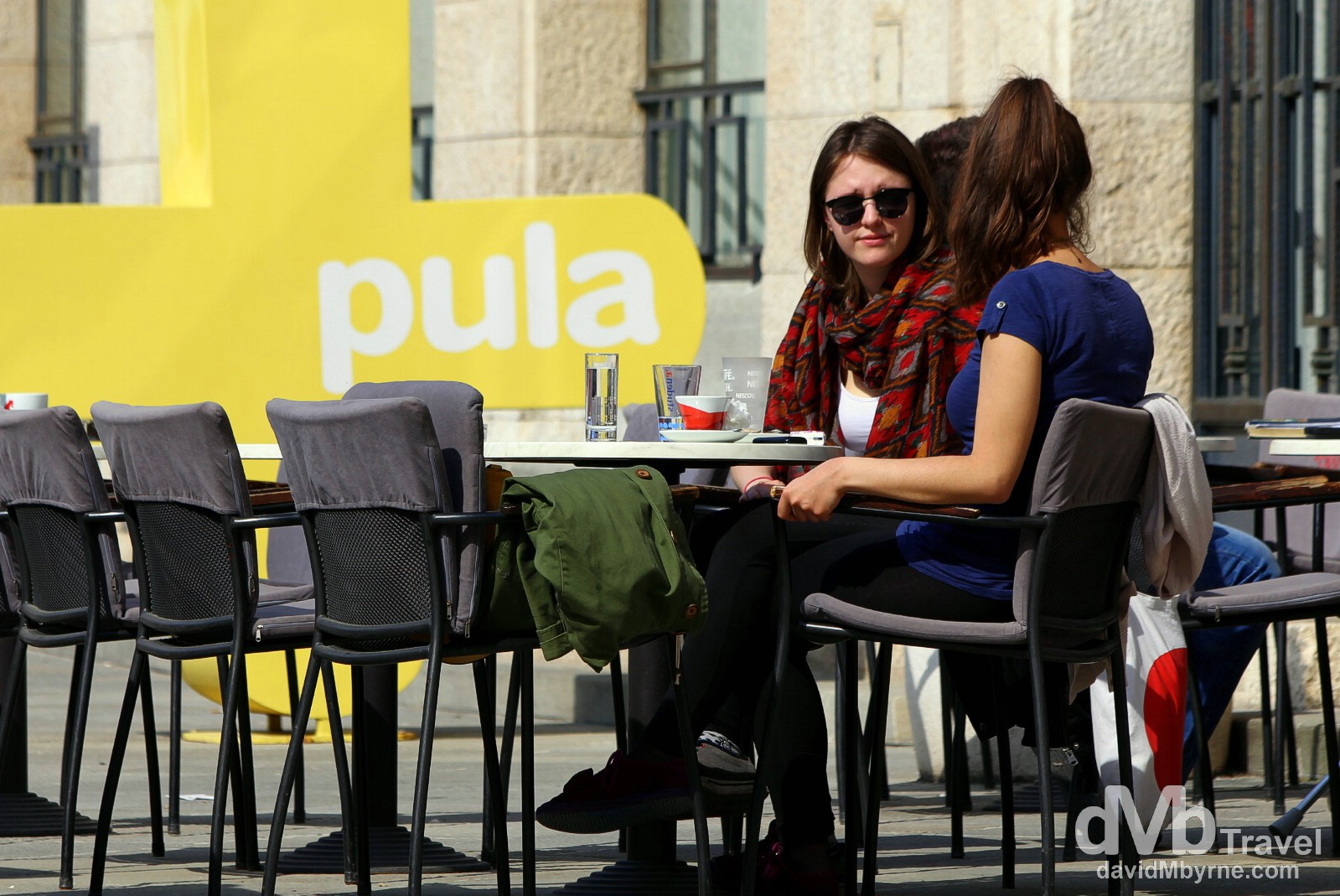 I‘ve just arrived in Pula on Croatia’s Istra Peninsula. It has been an interesting day. I left Venice, Italy, at 11 a.m. & spent 2 hours on a train getting to Trieste, Italy, where I waited for a bus for another hour before sitting on it for the next three hours. During those three hours I, & in the space of 30 minutes, left Italy, entered Slovenia, exited Slovenia & entered Croatia. Neat. I now find myself in a town, Pula, that I hadn’t heard of until a few days ago. I’m only about 110 kilometers from Italy but, and aside from the fact that there are Roman ruins dotted around town, I’d swear I was in Eastern Europe such is the look a feel of this place. It’s very different to Italy, but then again most places in Europe are.

I’m eating pizza in a pizzeria in town. It has internet. My hostel doesn’t. It barely has a roof. But it does, just, one that’s being propped up by a sea of scaffolding. The hostel is a construction site right now (saying it’s undergoing low season renovations doesn’t even begin to cover it) & I’m shocked they are accepting people at all. But they are & they accepted me. I’ve been assured by the affable owner, Lee, that I’ll be comfortable. She’s not Croat. She’s not even Italian. She’s Chinese & can barely speak English. Our rudimentary conversations thus far have been interesting & she even offered to cook a meal for me tomorrow night. Oh yes, an interesting day alright.

I’ve just finished dinner, the one cooked for me by the hostel owner. Two courses no less – dumplings followed by a plate of noodles I could have hiked, all washed own by a glass of red wine, the only non-Chinese element of the meal (I’ve discerned that the extraordinarily hospitable hostel owner is from Hong Kong). Delicious. I now wish every hostel was like the Art Hostel here in Pula, its present external aesthetic shortcomings aside. 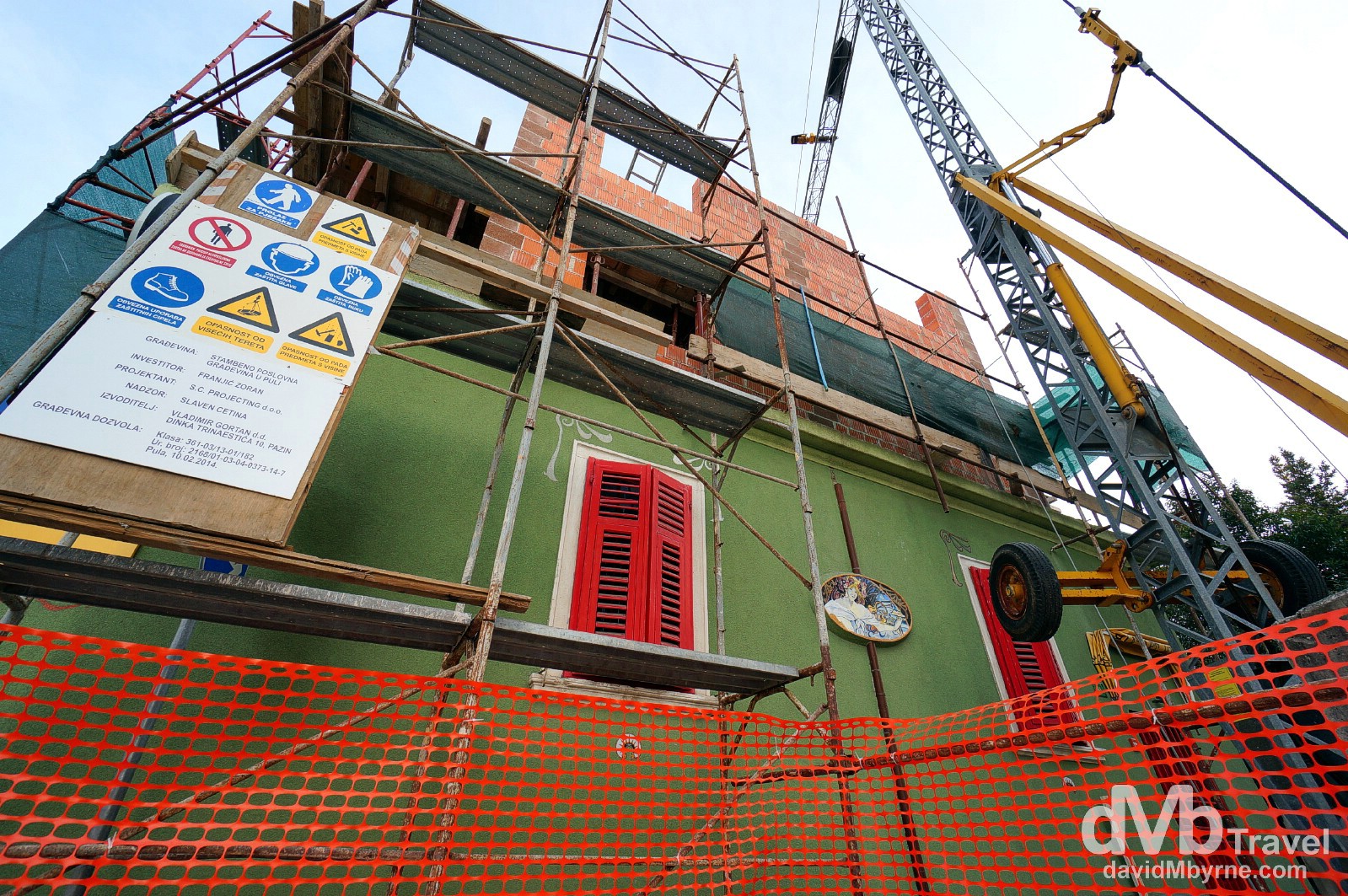 Looks can be deceiving, never judge a book by its cover, first impressions yada yada yada. The Art Hostel in Pula is like many a girl I’ve known – lovely on the inside. And the inside, decked out like an art gallery, hence the name, & with room for 8, was all mine. Pula (

Pula was awesome. I spent today walking around the headlands south of town, staring at the azure blue waters of the Adriatic (although staring is all I did). 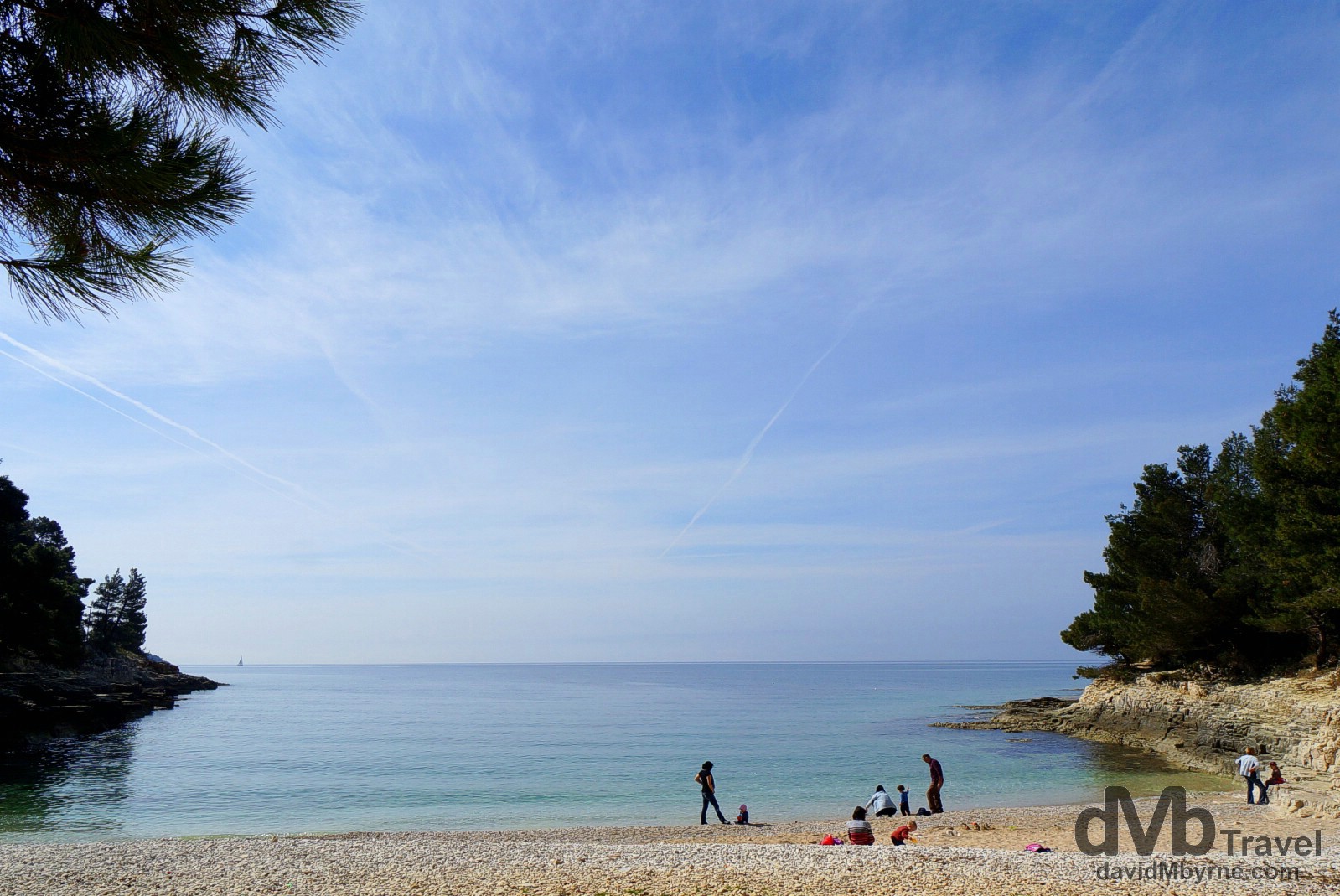 Even for an aquaphob like me, the azure waters of the Adriatic off Pula are awfully enticing – & it’s the azure waters that draw the hordes here in the high season of July & August. But seemingly this time of year it’s still a bit too cold to take a dip. You won’t find many beaches on the outskirts of Pula itself (most beaches are further along the coast fronting expensive resort hotels) & the ones you do find, although idyllically secluded like this one here, are stony. But you will find ample rocks off which to throw yourself into the Adriatic were you that way inclined. It really is a beautiful part of the world. Valkane, Pula, Croatia. March 21st, 2014

Once I left the coastal headland I hung around Pula’s Central Market for a bit. I then went bar hopping, café bar hopping, soaking in the good weather while engaging in a spot of people watching & utilizing the free downtown Wi-Fi Pula offers to all. I mean I ask ya, how can you not like this place?

Pula is a great place to cafe hop. And with the sun shining & at 9 Croatian kunas (€1,20) a coffee you can hop… & hop… & hop all day. Oh, and there are large signs around town just to remind you where you are. Just, you know, in case the caffeine (or the sun) brings on amnesia. Pula, Istra, Croatia. March 21st, 2014

The Romans were here in Pula (you probably heard of them; grand lads they were) & they left behind a wealth of architecture. Millennia-old arches, columns & rocks dot the city landscape, one dominated by this, the remarkably well preserved amphitheater, the biggest show in town. 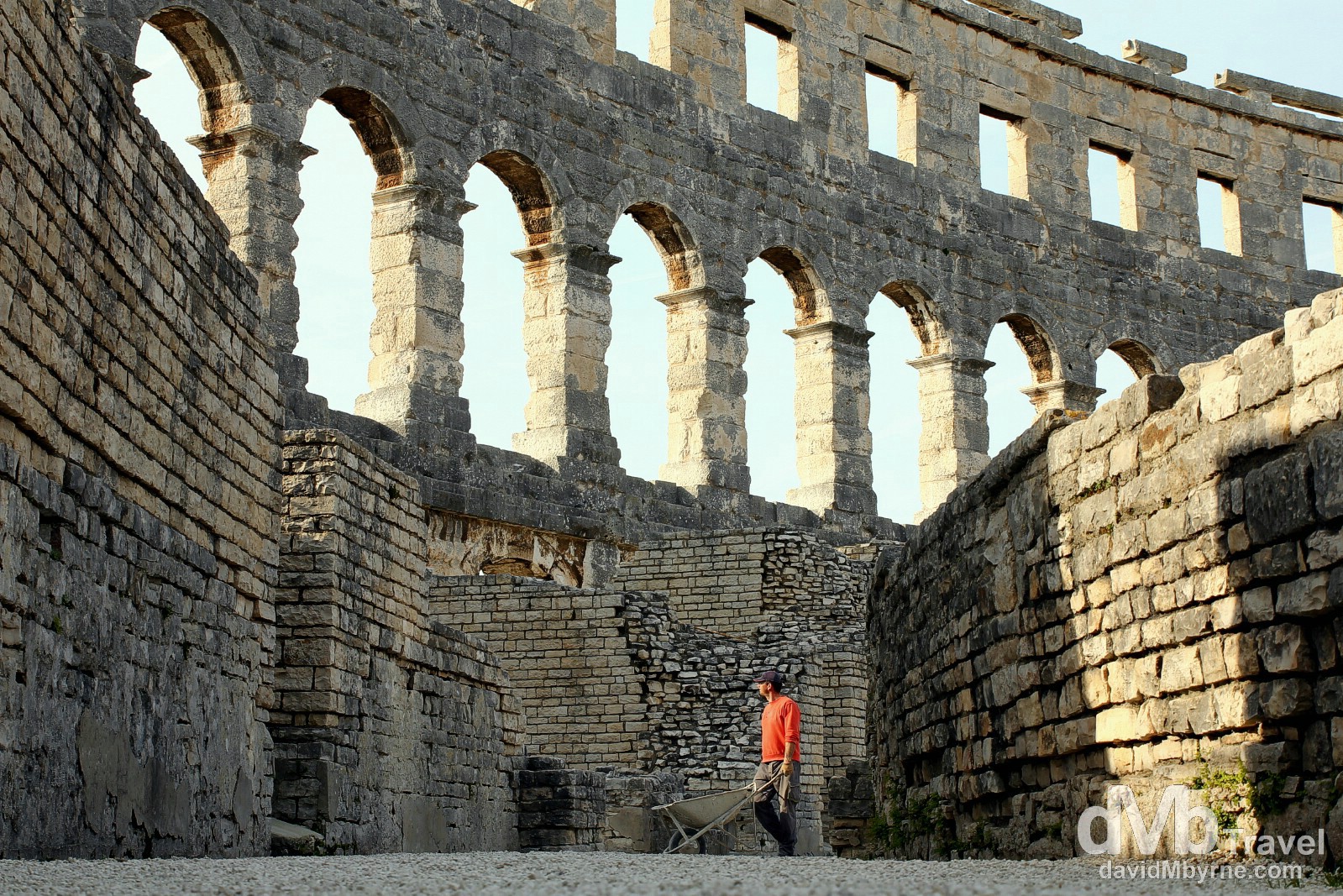 Built entirely of local limestone and with a capacity to hold 20,000, Pula’s massive Roman Amphitheater was designed to host gladiatorial contests. Today it serves as a summer concert venue & for 40 Croatian kunas (€6) you can snoop round its innards, just like I did. Pula, Istra, Croatia. March 21st, 2014

I’m leaving Pula in the morning (sad face) but I’m not too sure where I’ll end up. I’ll be aiming to get to Ljubljana, the Slovenian capital, but failing that I’ll be staying in Croatia and going to its capital Zagreb (& even if I do make it to Ljubljana I’ll be dropping in on Zagreb in a few days en route to Budapest). It all depends on the buses & their reduced low-season schedules (Croatian trains barely run at all this time of year). It’s the only downside to out-of-season travel in this part of the world. Not that I’m complaining of course. How could I?