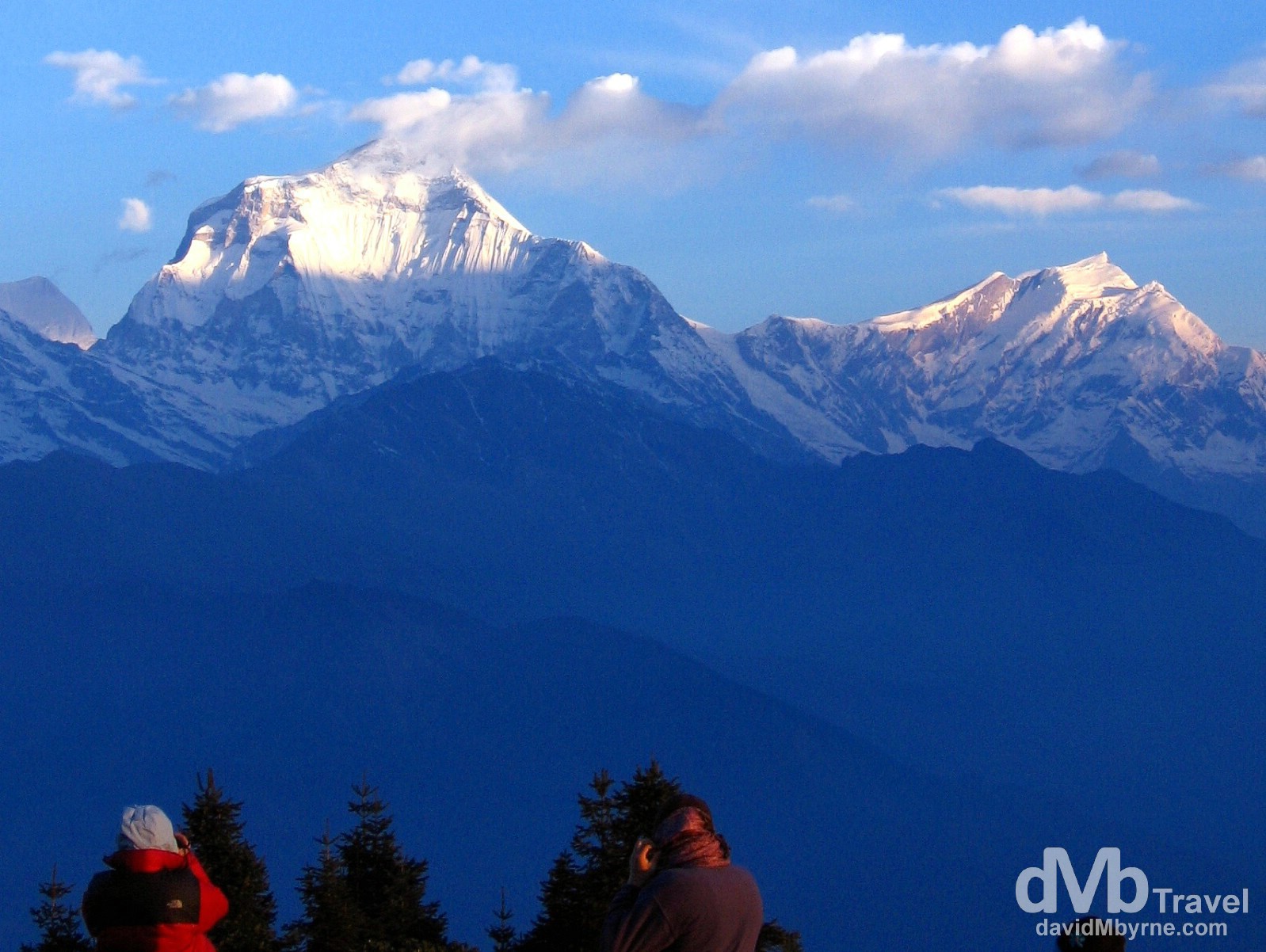 Thank you God. Thank you Allah. Thank you Vishnu. Thank you Buddha. Thank you whatever god, or gods, have reign over this part of the world. We now know somebody listened to our prayers last night, prayers that asked for clear mountain views this morning. Someone obviously decided that we’d had enough of seeing misty, white nothingness and that we’d probably suffered enough in getting here, that we’d suffered enough to cut us a break on this, the last day of our 3-day Poon Hill trek. Pat & I were in agreement while standing atop of Poon Hill (3,200 meters / 10,500 ft) at 6am this morning that there was indeed a god and that what we were feasting our eyes on at that exact moment made all the effort worthwhile – the two days of sweat-inducing, ankle-twisting walking, the 2 days of looking at mist when we knew it was hiding something so much better, the 2 days without a beer, 2 days without electricity, 2 days of solar powered showers, the combined 10 hours we spent in buses (from Kathmandu & Pokhara) to get to the starting point of the trek, and finally the mind-your-step obstacle course we completed when leaving our guesthouse and walking up Poon Hill in the pitch dark at 5:30 a.m. this morning. Yes, that’s what we had to endure to get here but it was all worth it.

A panoramic picture of early sunrise on the face of the peak Dhaulagiri (8,167 metres / 26,795 ft) as seen from Poon Hill. The rising sun first struck the face of Annapurna South (7,219 metres / 24,000 ft) to our right, a peak Pat nicknamed ‘Ann-Purna Kova’ due, he says, to its slender appearance (I think he’s missing his girlfriend). Once the suns rays had risen over Annapurna South the first light of the day hit the peak of Dhaulagiri, sitting in all its glory to our left. Dhaulagiri, although not part of the Annapurna range, is the highest peak in the region & the 7th highest mountain on earth, and watching the light slowly creep down the face of the mountain was a magical experience. Poon Hill, Annapurna Conservation Area, Nepal. March 12th, 2008 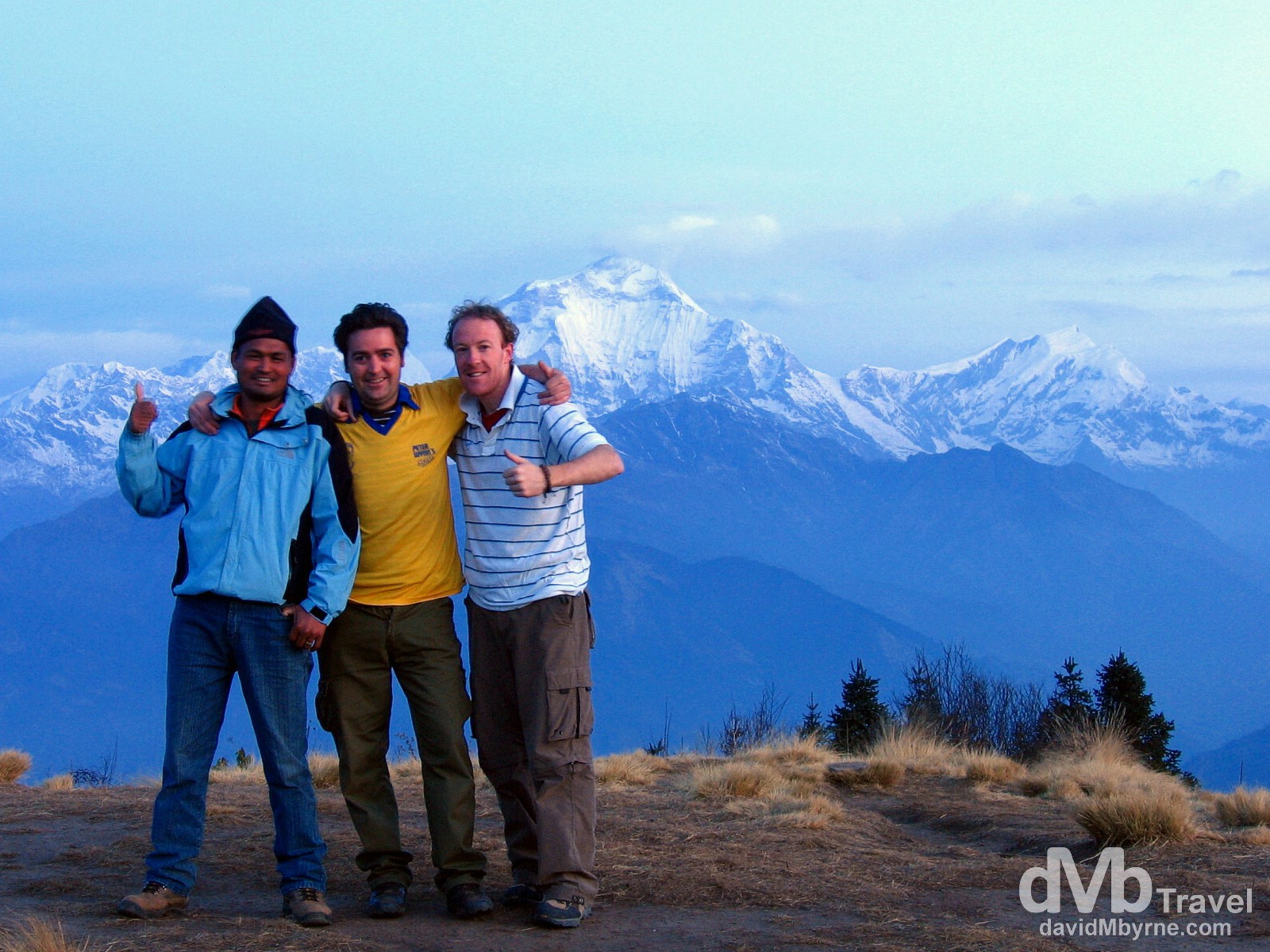 L-R: Dill, Pat and I on Poon Hill with Dhaulagiri in the background prior to sunrise. If we look cold it’s because we were. Well, Pat and I were but Dill was, and as one might expect, better prepared for the temperatures. Poon Hill, Annapurna Conservation Area, western Nepal. March 12th, 2008.

We spent an hour or so on Poon Hill with numerous other camera-toting tourists, sitting there as the sun rose from our right slowly illuminating the peaks to our left. It was a spectacular, unobstructed sight – the full beauty of a small, albeit grand, section of the Himalayas spread out before us. The absence of sunlight at 3,200 metres meant it was cold up there, temperatures we, with our trekking uniform of t-shirts and light sweater, were ill-equipped for. But that didn’t matter. Didn’t matter in the slightest. We kept moving, cursing all the warm, winter-jacket wearing tourists sharing the views with us and when we had had our fill of views and had taken all the pictures we wanted (miraculously our digital camera batteries held out for 3 days without needing a recharge) we headed back down to Ghorepani where we had breakfast before starting the descent. Oh the descent. 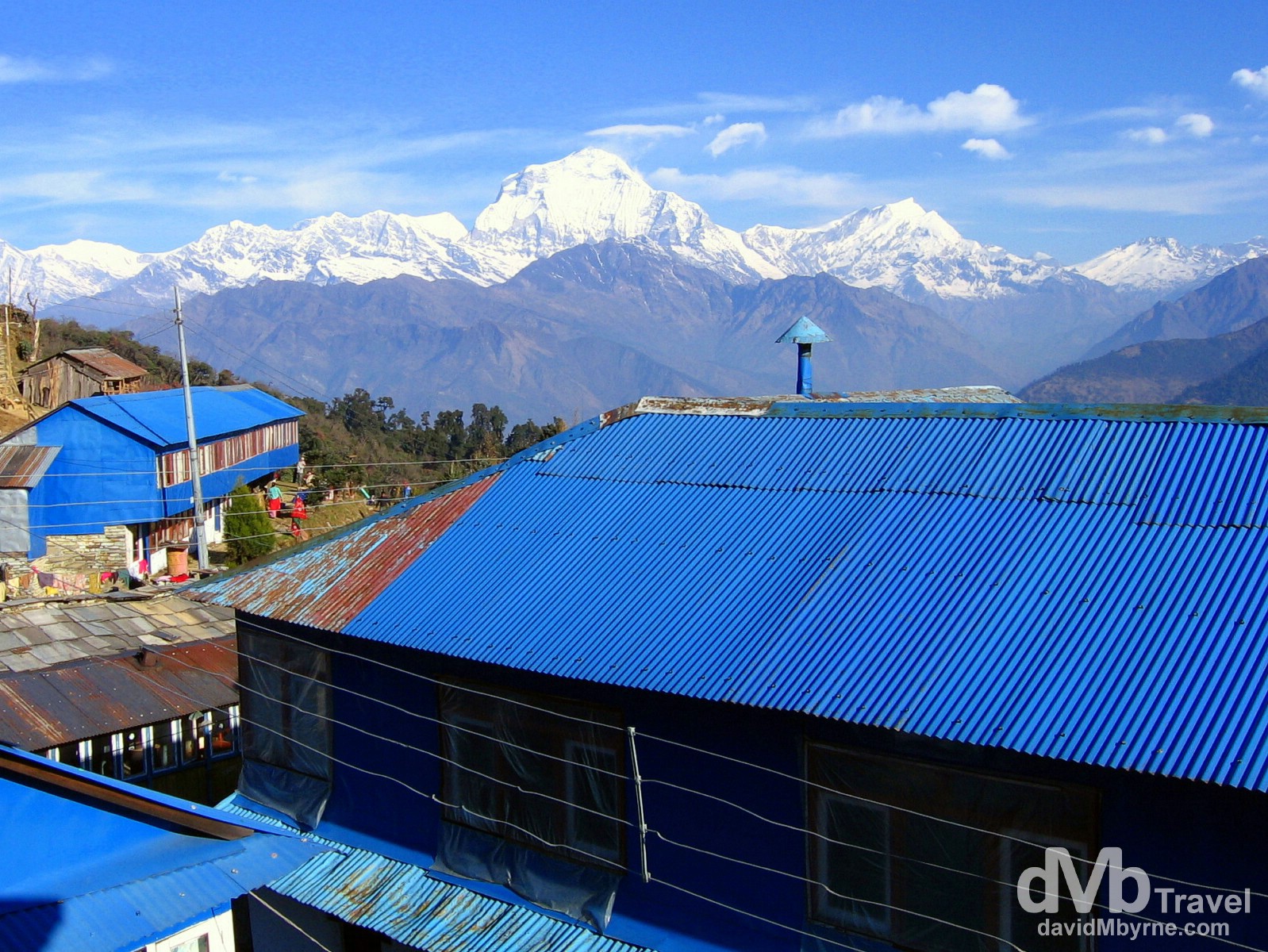 The distinctive blue galvanised roofs of the buildings of Ghorepani village, western Nepal. The village sits 450 metres (1,500 ft) below Poon Hill and the sight of the 8,167 metre Dhaulagiri behind the village makes for a spectacular backdrop. Ghorepani Village, Annapurna Conservation Area, western Nepal. March 12th, 2008

Down. Down. Down.
The old adage that what goes up must come down holds true for trekking in Nepal and we were well aware during our two days of walking uphill that on the third day that it would be a different story and that we’d have to walk back down. We weren’t retracing our steps from days 1 & 2 but we’d still have to reverse our two day altitude gain of some 1,900 metres (6,300 ft) in one day. That’s quite a drop, a drop our knees now know all about. We pounded them – our knees – as we walked down, down, down the valley wall we had to reach the bottom of. And when we thought we were finished walking down, down, down, we’d walk down, down, down all over again. It was, for two solid hours, relentless and the only solace we could take from the punishment we were inflicting on ourselves was that we passed dozens of other trekkers making the slow, painful ascent up the same flights of steps we were descending (we’d much rather be going down). But the down, down, down was only the half of our day 3 walk today. When we finally reached the valley floor we had another 2 hours of walking ahead of us to get back to where we were to catch the bus back to Pokhara. It was flat walking and it shouldn’t have been a problem, but it was probably the longest 2 hours of walking we did over the whole 3 days. Maybe it was the previous two days of walking catching up on us. Maybe it was the pace. Maybe it was the 2 hours of downhill stomping we had just completed. Maybe it was all three. Whatever it was by the time we got to the valley floor neither of us were quite ready for the walk that lay ahead and had we been able to charter a few donkeys to take us the rest of the way then it would have been money well spent. But we soldiered on and eventually made it back to the starting point of the trek, albeit not in as good a physical shape as we were at the same point 2 days earlier – bright eyed and bushy tailed we were back then, tired, sweaty and longing for a shower (& a beer) we were today. After a quick lunch and 2 hours spent on a crammed local bus sandwiched between two local Nepalese we were back in Pokhara. Time to relax and time to recover as we waited for the onset of the real hurt in the morning. It’s unavoidable.

Day 3 Observations
· Local shafting
Even locals have to haggle hard for a taxi fare here in Nepal. We were amazed when Dill, our guide, had difficulty getting a taxi to take us from the Pokhara bus station back to our guesthouse having returned after our trek. When he didn’t like the quoted fare he just walked away, just like us westerners would do, assuming someone would take us for the price he was willing to pay. Someone did of course. It was sort of refreshing to see a local having to bargain just like we do and even more refreshing to know if we had to do the bargaining then we’d have done exactly the same thing.

· Up to our old tricks
It wasn’t our fault we started drinking as soon as we got back to Pokhara. It was the Greenland Guest house owners’ son’s fault, that and the fact that we went two whole days without one. The owners son had the key to the luggage room where our bags were stored and until he came back from wherever he was we had no access to our stuff, meaning no access to a clean set of clothes, toiletries etc.

“What time will your son be back?” Pat asked the accommodating owner.

“Right so, it’s 3:30 p.m. now so we’ll just sit here and have a beer or two while we wait,” said Pat, looking to me for a nod of agreement which was quickly given.

5 p.m. rolled around, we were finishing up our second beer and there was still no sign of the owner’s son.

“Another beer Lad?” I asked. Another nod of agreement.

“What’s the story with your son. Where is he? We’ve stuff to do and can’t really sit here all day drinking”, we said to the owner, clearly lying in the process.

“So sorry Sir, he is on his way. I can break the lock to the luggage room if you want?” the clearly embarrassed owner informed us.

“No no no… no need for that,” we said before accepting our fate and ordering two more beers.

Shortly after that the son arrived, we were reunited with our bags and we both had sufficient beer left in our fourth bottle to enjoy it in the shower. Bliss.

· Pending hurt
We know tomorrow we’ll be hurting and we’re not looking forward to it. It normally takes a day for the feeling of muscle abuse to set in but we’re just hoping it isn’t too bad, although considering the pounding we gave our poor feet, knees, calves and thighs today we’re not holding out much hope. Wheelchairs at the ready.

· Scissors hands
I got a haircut tonight. Yep, the first one since I was back in Korea in late December. It was quite the experience.

“How much for a haircut?” I asked the nice little Nepali man in the Pokhara Lakeside barbers.

I thought to myself that if this guy is prepared to give me a haircut for 70 rupees (€0.70) then he can do his damnedest. 10 minutes later and after a frenzy of blurry scissors action I was minus the ugly mop I’d been sporting for way too long. A quick head massage followed the cut and I was on my way, 150 rupees poorer. I felt he deserved the tip for the exquisite job he did.

· 3 hour half service
Once we got back to Pokhara and into a fresh set of clothes, we didn’t even want to touch with our own hands the clothes that we wore for the 3 days of trekking so much in need of a good cleaning were they. So off to the nice laundry man we went with our bag of clothes. Because of the holdup in getting into a fresh set of clothes we were late getting to him (7 p.m.) but the sign outside his business stated a 3 hour service was available and that he didn’t close until 10 p.m. Perfect.

“We’re leaving early in the morning for Kathmandu so we need these back tonight. If you can’t have them back in 3 hours then it’s no problem; we’ll just bring them to Kathmandu in the morning and get them done there,” we told him as we dropped off the goods, giving him first dibs at our custom.

“No problem Sir, no problem,” he assured us as we headed off for dinner, no doubt his confidence motivated by the NPR400 (€4) we had agreed to pay him for the service.

At 10 p.m. we returned to pick up our laundry, waiting nicely folded in a bag for us. Giving him another well deserved tip saw the bill coming to NRP500 (€5).

“These are soaking wet!” Pat told me when we got back to the room to pack for the early morning return to Kathmandu.

Sure enough they were, and while Pat’s statement of our clothes being ‘soaking wet’ was somewhat of an exaggeration, they were sufficiently damp to warrant keeping them in their plastic bag for the trip back to Kathmandu. So the morale of the story is never trust a Nepali to deliver the goods in the face of easy money because invariably you’ll be had, just like us. Either that or don’t expect too much in the first place.