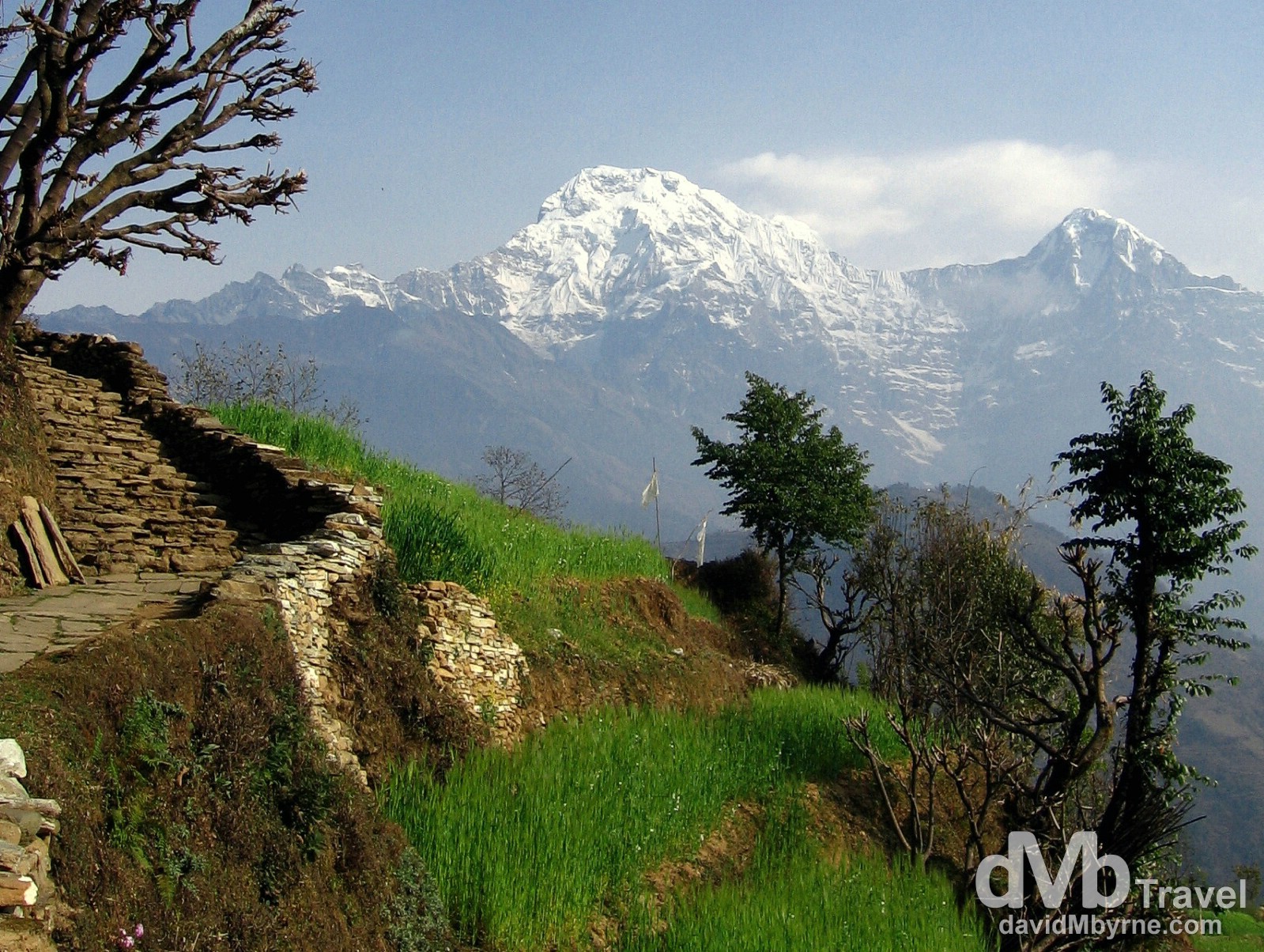 I had a rather unusual alarm call this morning.

“Dave! I see a mountain” were the first words I heard as I was awoken from my slumber at 7 a.m. by an excited Pat. He was like child on Christmas morning.

“Make that two mountains… two big mountains,” he continued, having paid another split-second visit to the balcony outside our room to take another glance up the valley.

Sure enough there they were. Two of the peaks we came here to see but didn’t see at all yesterday, even though we spent 3 hours facing them as we walked towards Ghandruk. This is more like it we thought. After a hearty breakfast (we’re sure the guesthouse was trying to kill us – death by gorging) and a French shower (a spray of deodorant) we were on our way again, spirits high.

“How many hours walking today Dill?” we asked as we set off at 8:30 a.m., the glorious 7,219-metre (24,000 ft) peak of Annapurna South staring right down on us as we walked through wooded terrain with rocks and wet leaves underfoot, a distinct change to the walking conditions of yesterday.

And we did. 5 hours later we were walking into our next overnight village, Ghorepani, right at the base of Poon Hill itself. It wasn’t an easy 5 hours. Far from it. We went up, up, up, down, down, down, up, up, up and finally down, down, down, again – yes, strangely enough we seemed to walk down into Ghorepani. The up, up, ups weren’t easy, nor were the down, down, downs, but that probably had something to do with, once again, our pace. By mid-morning the mist that had yesterday obscured our views of the mountains, the ones we could now say for sure were there, had returned and we were once again staring into white nothingness, white nothingness we actually descended through as we approached Ghorepani village. 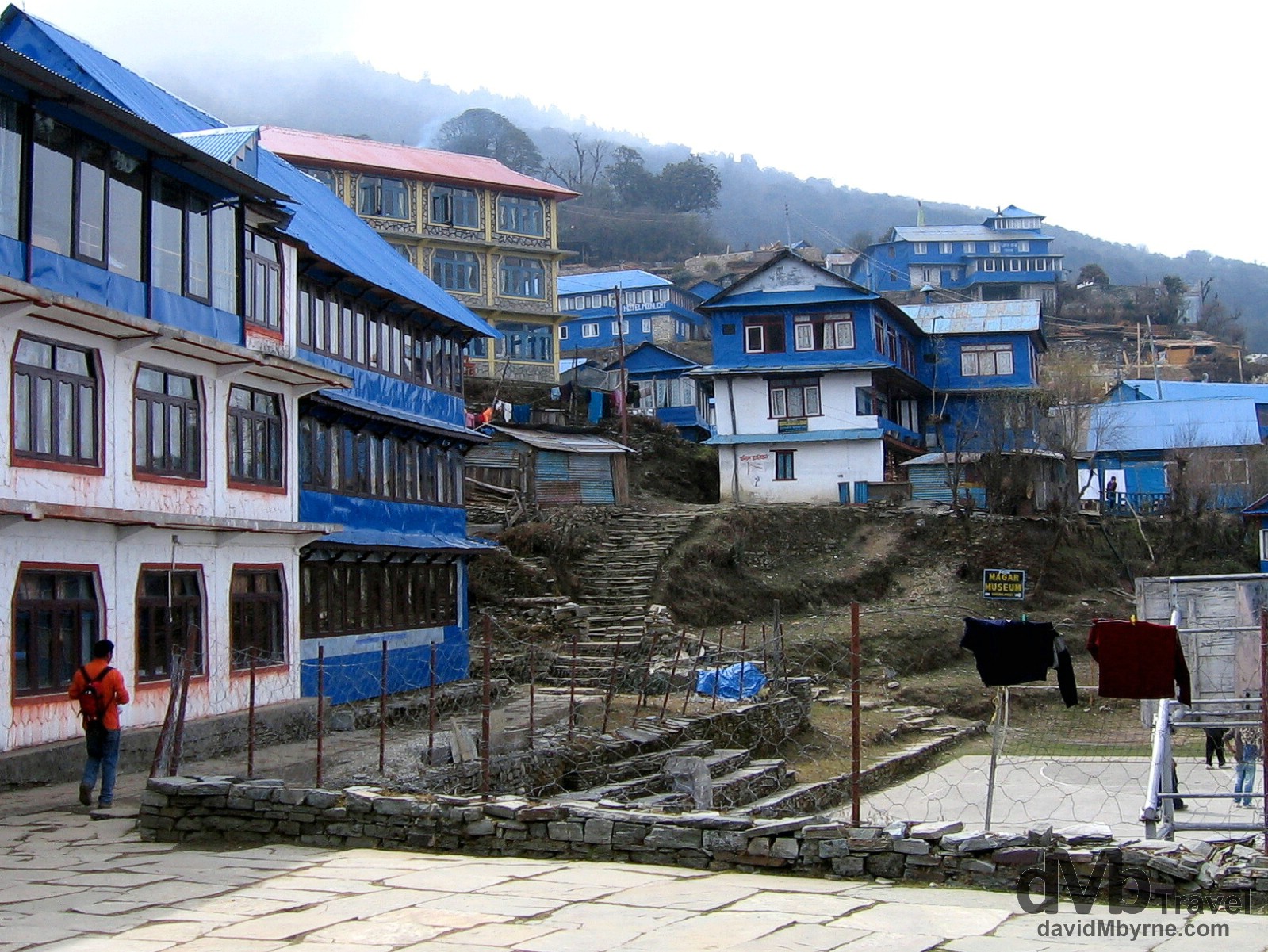 Having arrived in Ghorepani at 2 p.m. we found we had even more time on our hands in this village than we did the previous afternoon in Ghandruk. It was probably a good thing then that we found a book shop. Another highlight of the village was the fact that the guesthouse we stayed at, although unable to boast of having electricity, had hot apple pie and custard. What a treat that was, a huge step up from the Pringles we savored 24 hours earlier. The rest of the afternoon and this evening was taken up with reading and eating, but not drinking. We’ll be in bed again early tonight and we’ll be setting the alarm for a 5am wake-up. Poon Hill overlooks the village and we’ll be doing the requisite early morning climb tomorrow to see sunrise over the Annapurnas, the Himalayan mountain range that dominates this part of Nepal. A Poon Hill trekker has got to do what a Poon Hill trekker has got to do. We’re holding out hope for good views although Dill isn’t too optimistic. There’s gotta be some reward for the two days of walking, not to mention the 5 a.m. wake-up.