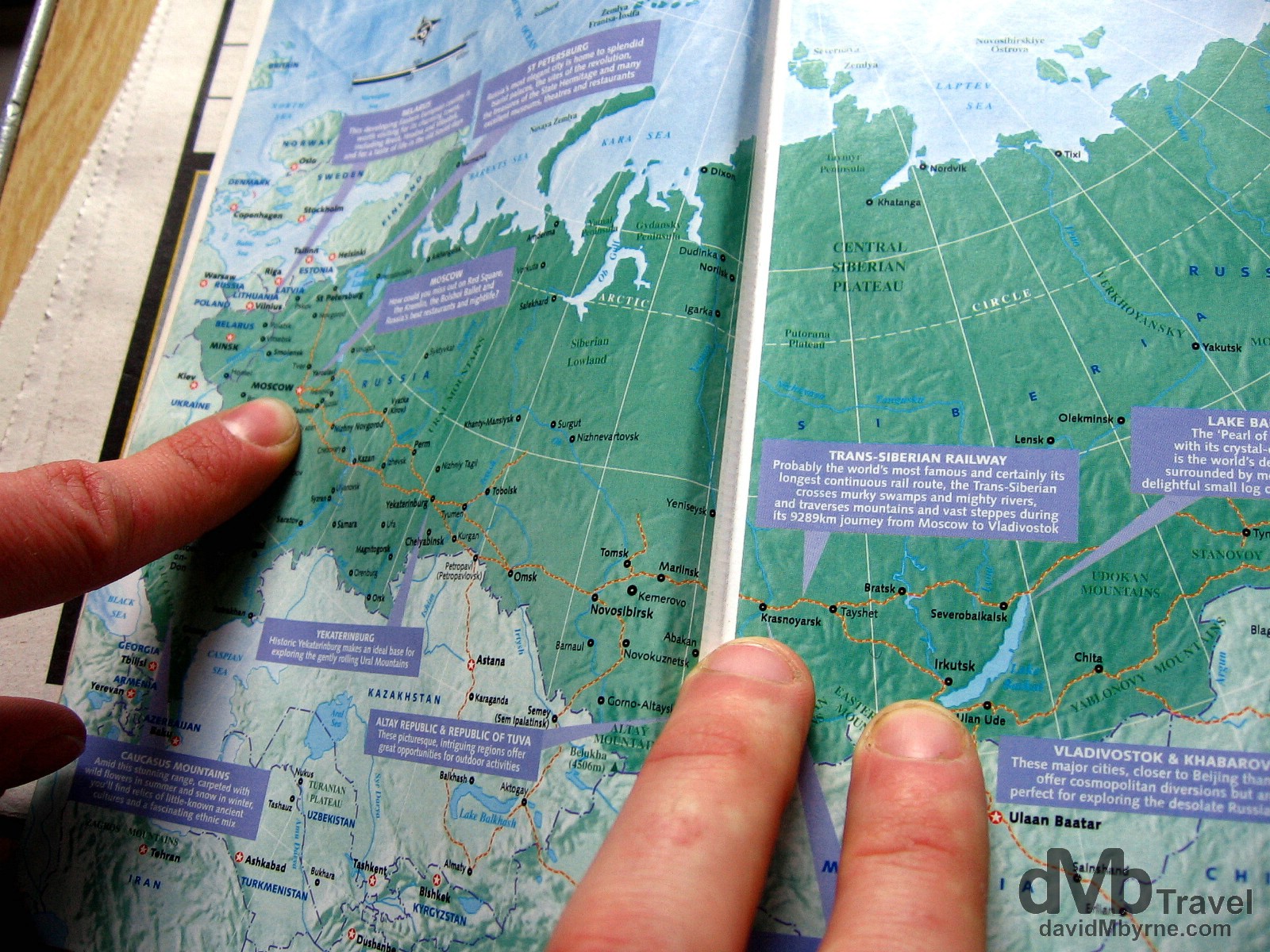 The initial shock upon boarding a Russian 3rd class (Platskartny) carriage in Irkutsk a few days ago died off quickly enough. However, the stuffiness, lack of privacy & general discomfort compared to the higher, 2nd (Kupé) class of Russian train travel was ever-present. I knew when purchasing my plastkartny ticket a few days ago in Irkutsk that my Russian train digs wouldn’t be as palatial as I had been accustomed up until now courtesy of Kupé class. But I also knew that as a budget traveller I was only ever going to be going Platskartny for the 48-hour, three timezone journey I’ve just completed from Irkutsk to Tuymen in Siberian Russia. This is what Seat61.com says about where I got to call home for the last 2 days.

Russian 3rd class – Platskartny: Open-plan dormitory cars. There are 54 bunks per coach, arranged in bays of 4 on one side of the aisle and bays of 2 along the coach wall on the other side of the aisle. Only recommended for the most budget-conscious and adventurous visitors.

All told the trip wasn’t bad. Wasn’t bad at all, my initial trepidation aside.

18 hours In | 30 To Go || If we didn’t know it already the enormity of this country was brought starkly home when we reached the city of Krasnoyarsk (middle finger). It was here at Henk, my travel buddy, & I looked at our guidebook map only to realise just how far we have still to travel and how short a distance we had actually traveled in the 18 hours we had spent thus far on the train getting here from Irkutsk (right finger). We weren’t going all the way to Moscow (left finger) on this train as Tyumen was our destination, a little over a days train ride short of Moscow. On the train from Irkutsk to Tyumen, Siberian Russia. February 20, 2006.

It is almost axiomatic that the worst trains take you through magical places. 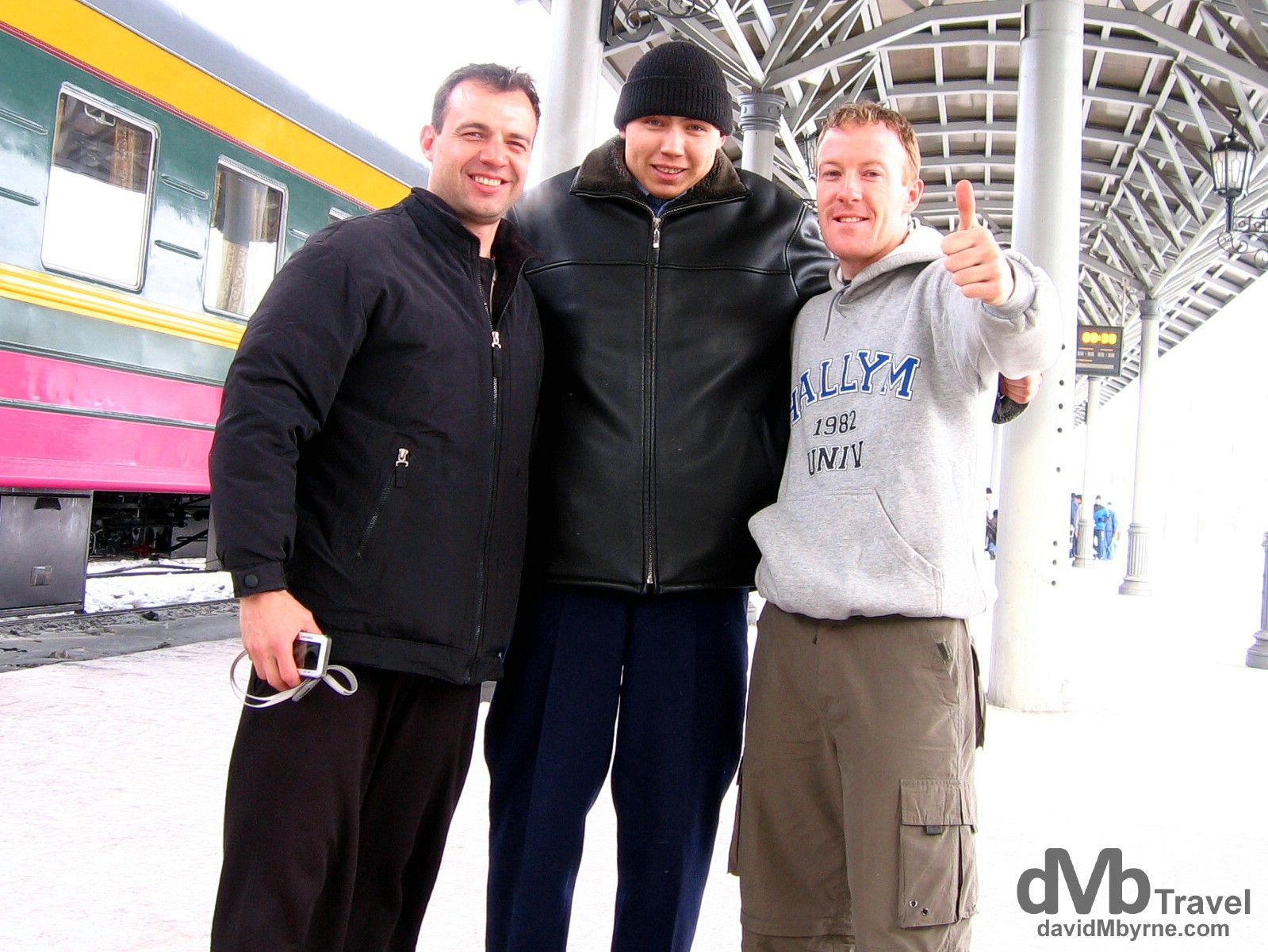 18 Hours In | 30 To Go || Each carriage on a Russian train has a carriage attendant, a provodnitsa, and ours thankfully was Sasha. He was a great guy who, & although unable to speak a word of English, went to great lengths to look after us two foreigners for the duration of the 2-day trip from Irkutsk to Tyumen. We had some good laughs with him as we learned about each others lives, primarily through broken English and Russian as deciphered through my phrasebook. This is a photo of Sasha, Henk and I on the platform of Krasnoyarsk train station as the train stopped for a few minutes on route to Moscow. Sasha, knowing our fondness for getting off the train to take photos whenever possible, always made sure to inform us when the train was going to stop (thus giving us sufficient time to wrap up for the escape from the train), where we were when we stopped and exactly how much time we had to spare before the train speed of again without us (not that he would ever let that happen). Krasnoyarsk ( 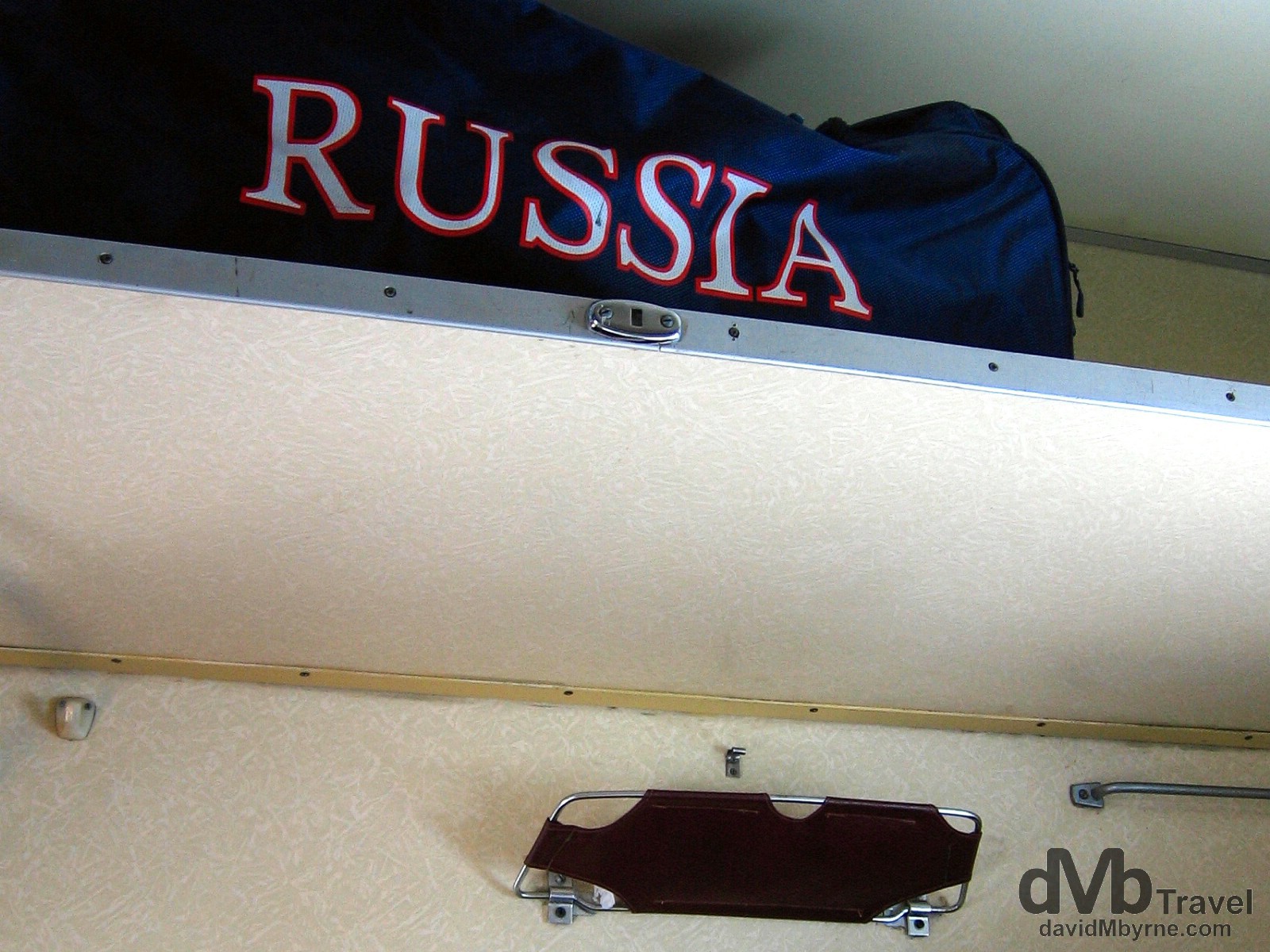 20 Hours In | 28 To Go || A young Russian freestyle skiing team boarded our carriage in Krasnoyarsk and were with us for the rest of the trip to Tyumen. We mixed well with them but they definitely had more of a fondness for the Henk when they learned he was Australian. That’s because Dale Begg-Smith is an Australian like Henk and he had very recently won the Olympic freestyle skiing gold medal in the Torino Winter Olympic Games, games that were in progress as we traveled. These young Russians are aiming to represent Russia in the 2010 Winter Olympics in Vancouver but for now they were sharing a Russian 3rd class train carriage with Henk & I. This is a photo of one of their kit bags on the train en route to Tyumen, Russia. February 20, 2006. 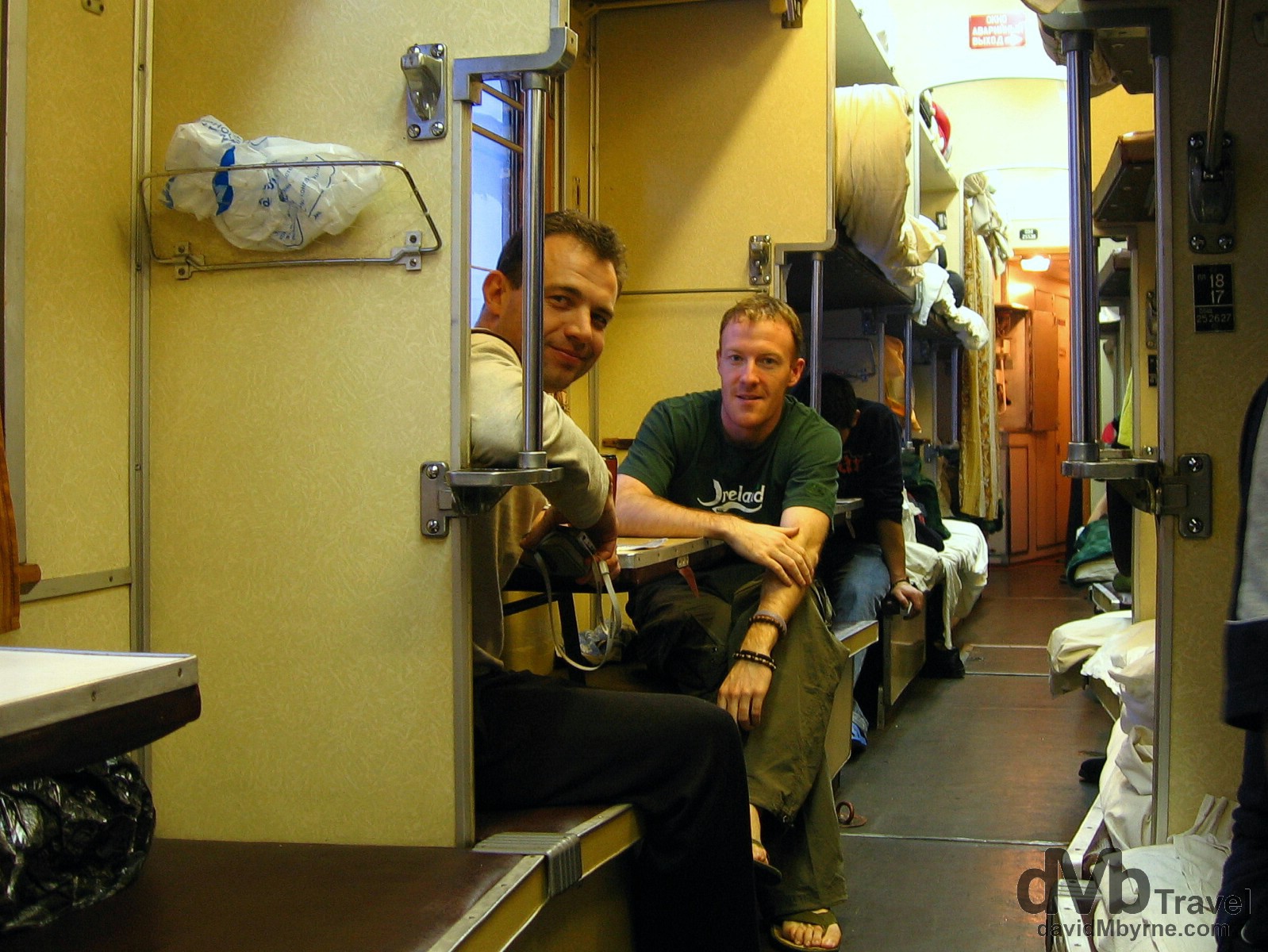 26 Hours In | 22 To Go || Henk & I during our 2nd evening on the train. Around this time Sasha informed us we were approaching another stop, this time a town called Marlinsk, so we got ready to disembark the train again for more photos. On the train from Irkutsk to Tyumen, Siberian Russia. February 20, 2006. 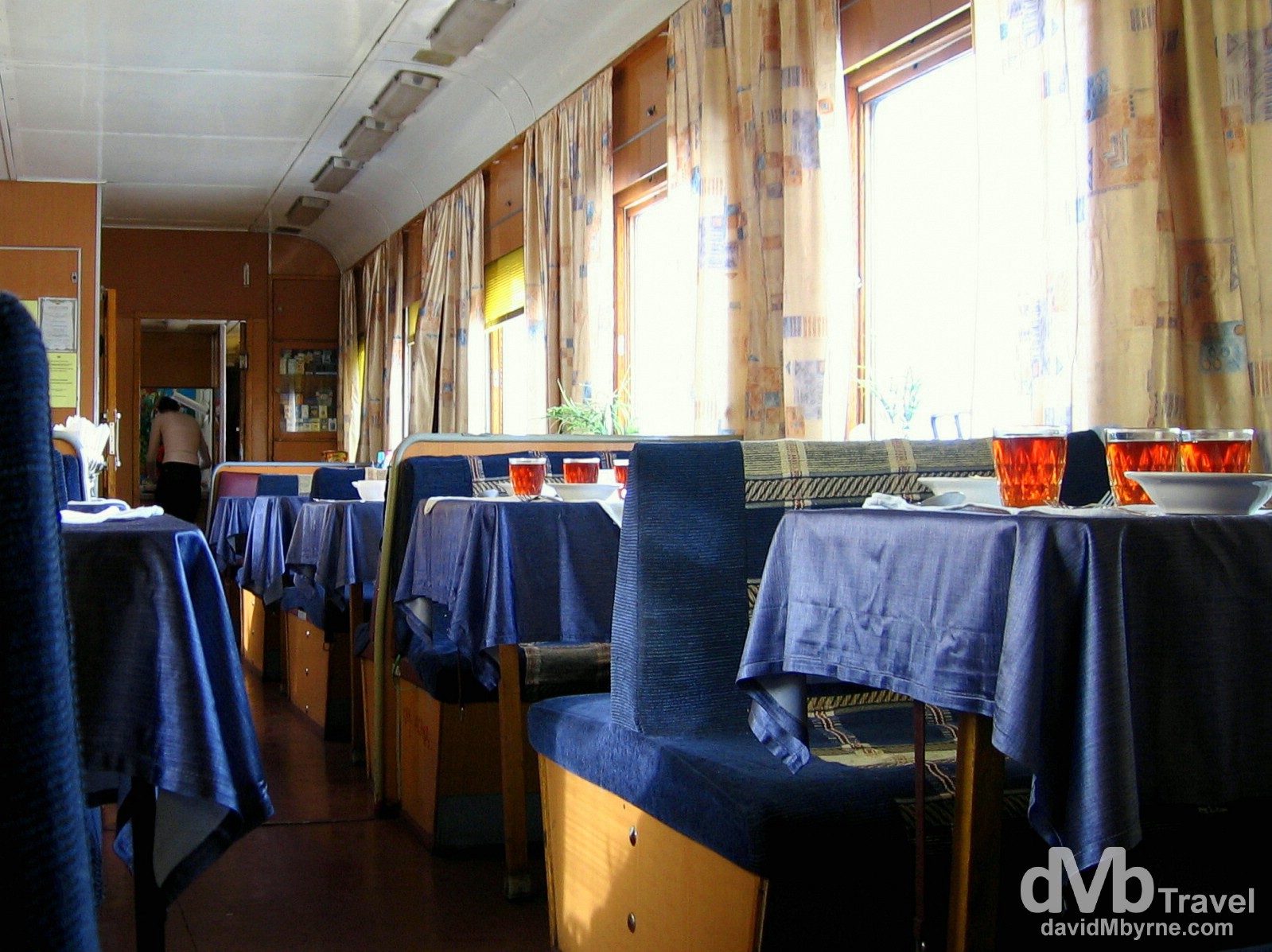 45 Hours In | 3 To Go || The dining car of the train. We visited here twice: to treat Sasha to dinner (& beers) yesterday evening & today when we had borshch, red vegetable soup – it’s usually made of beetroot which gives it its color. It is widely believed to be originally from Ukraine but is a part of the local culinary heritage of many Eastern and Central European nations, especially Russia & Poland. On the train from Irkutsk to Tyumen, Siberian Russia. February 21, 2006.

Between Sasha & the Russian freestyle team we befriended, we had quite a big farewell party to see us off as we disembarked the train in Tyumen (

) earlier today. It was good to get off the train and we’re both looking forward to the change of scenery (and a shower) that somewhere new will bring. Would I last the 5-6 days it takes to do the whole Trans-Siberian from Beijing to Moscow, even in 2nd class/Kupé? Maybe, maybe not. But I wouldn’t mind giving it a go some day.