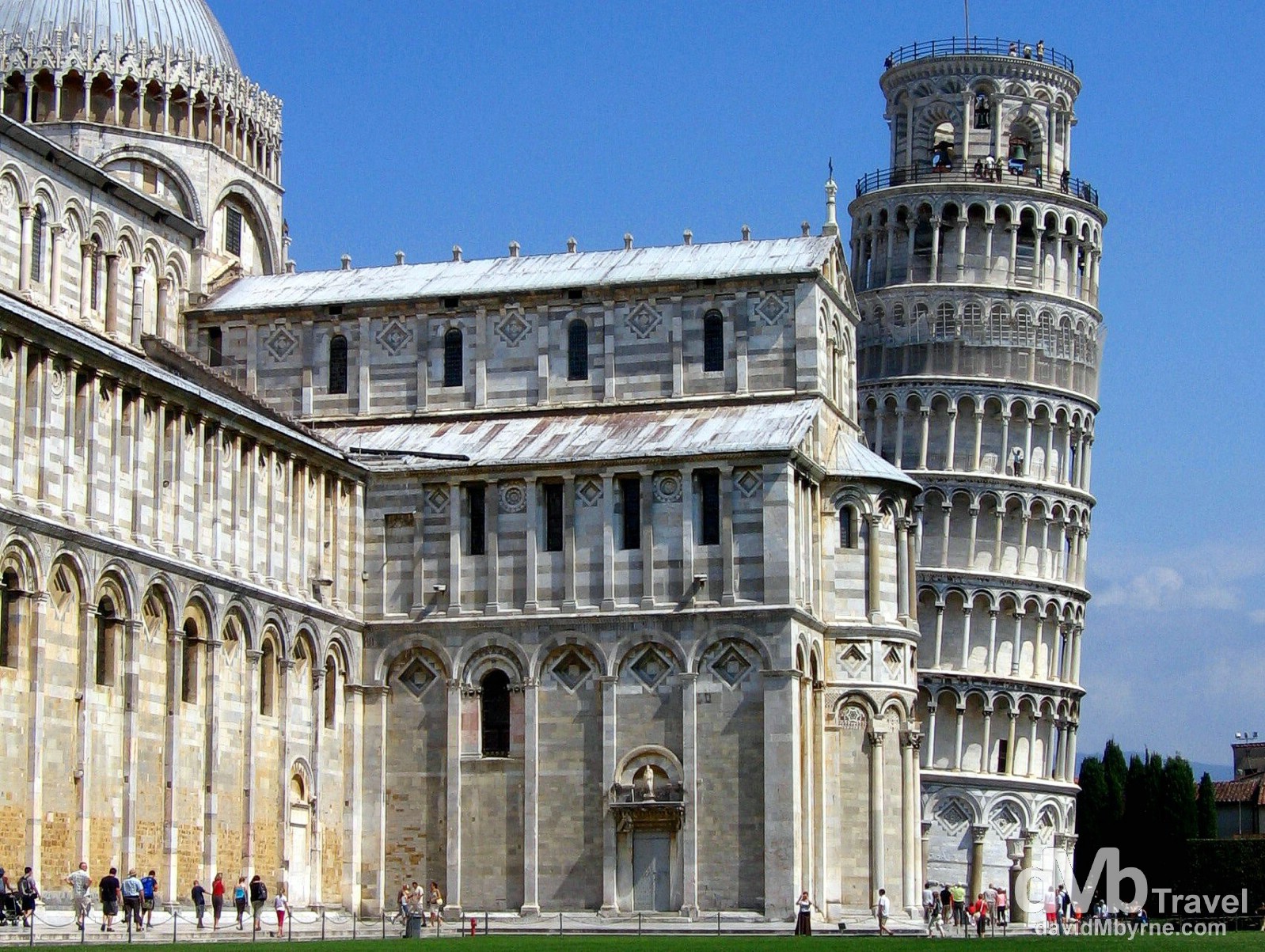 Pisa is a small city in the Italian region of Tuscany, a city that has, since the beginning of tourism, been known for just one thing – its Leaning Tower. I stopped off in the town en route from Florence to the Italian capital of Rome, joining the masses to get a look at one of the world’s most bizarre & iconic sights.

A section of the Cathedral & the leaning tower in Pisa’s Piazza dei Miracoli (Square of Miracles). When in here, all eyes are obviously drawn to the extraordinary Leaning Tower. However, it is just one of four gorgeous buildings – masterpieces of medieval architecture according to UNESCO – in the UNESCO listed piazza, the others being the cathedral (also seen in the above image), the circular baptistry, & the cemetery. The piazza is walled with expanses of immaculate lawns. Pisans claim the Piazza dei Miracoli setting is among the most beautiful in the world, a claim few would disagree with. Pisa (

Standing in a large green expanse, Piazza dei Miracoli houses a group of monuments known the world over. These four masterpieces of medieval architecture – the cathedral, the baptistry, the campanile (the ‘Leaning Tower’) and the cemetery – had a great influence on monumental art in Italy from the 11th to the 14th century.

Acme School of Engineering
The famous Leaning Tower of Pisa is the Campanile (bell tower) of Pisa Cathedral, construction on which began in 1173 during a golden age period for Pisa, a time when the city rivalled Genoa and Venice as a maritime power. Construction continued in 3 phases, taking a total of 173 years to complete. Issues surfaced early in the construction and the tower began to tilt after only 3 of its 7 tiers were completed. Efforts were made to right the tilt (by building higher floors with one side taller than the other) but this only succeeded in creating a second tilt, meaning the iconic tower is slightly curved.

Despite other dubious must-stop-the-tilt efforts, the tower continued to drift at a rate of about 1 mm a year & by 1990 it had reached 5.5 degrees off vertical, a fraction of a degree beyond the critical point at which computer models predicted the tower would fall. The Leaning Tower hadn’t fallen by 1998 at which time its future stability was assured, and with it the Pisa tourist trade, by a combination of soil drilling and biased weighting, meaning the tower won’t be moving any time soon from its present position of 4.1 meters off perpendicular, not even accounting for the efforts of the endless line of tourists aiding the cause by getting that lets-push-up-the-Leaning-Tower picture. Some even help push it up with their feet and some even attempt to right the 834-year-old lean in tandem. Sweet. 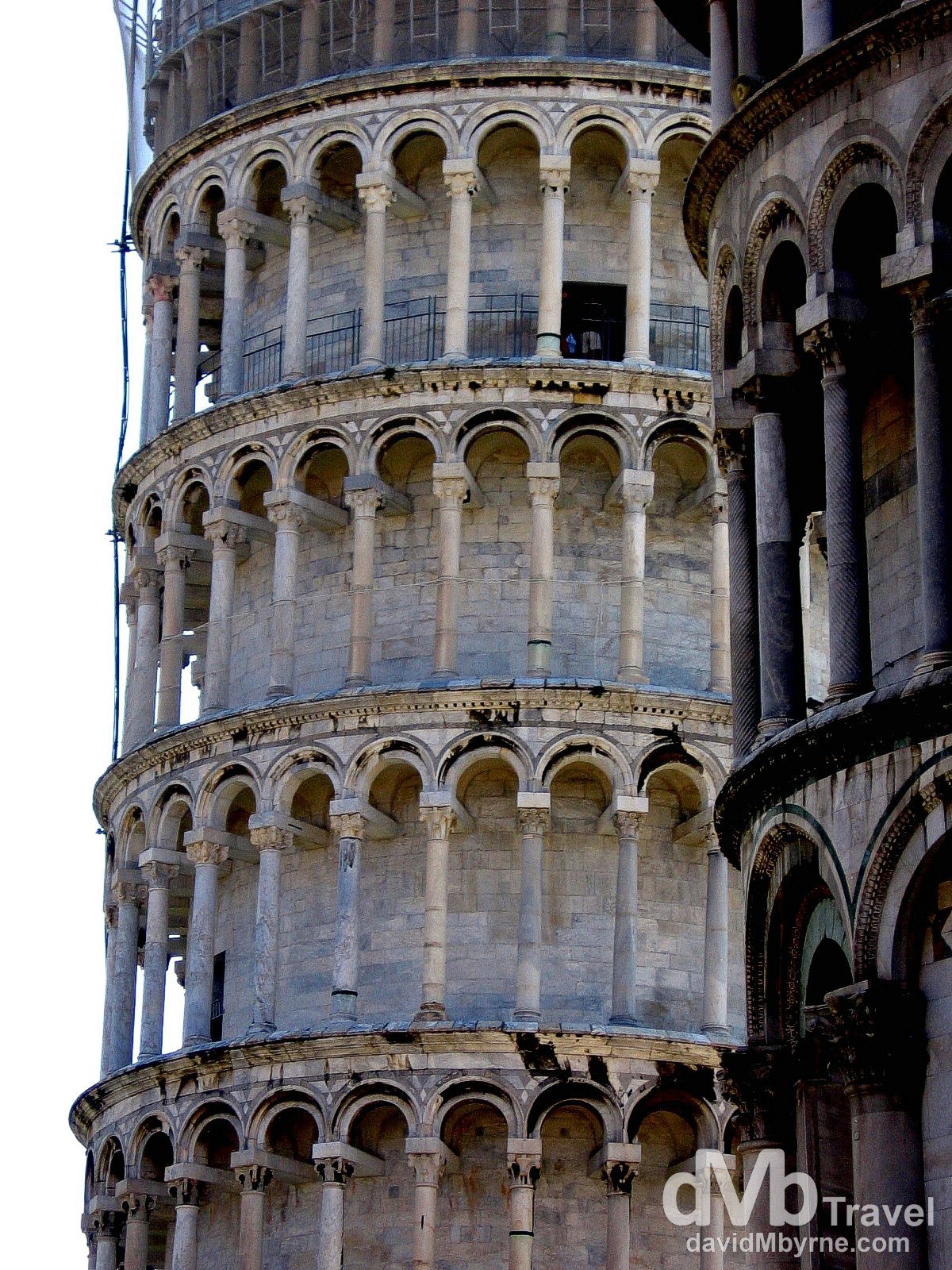 You can scale the Leaning Tower if that’s your want. Numbers are restricted to 30 at any one time meaning a long wait in an even longer queue is virtually guaranteed. Oh, and you’ll also need to part with €15 of your hard-earned. Pisa, Tuscany, Italy. August 31st, 2007.