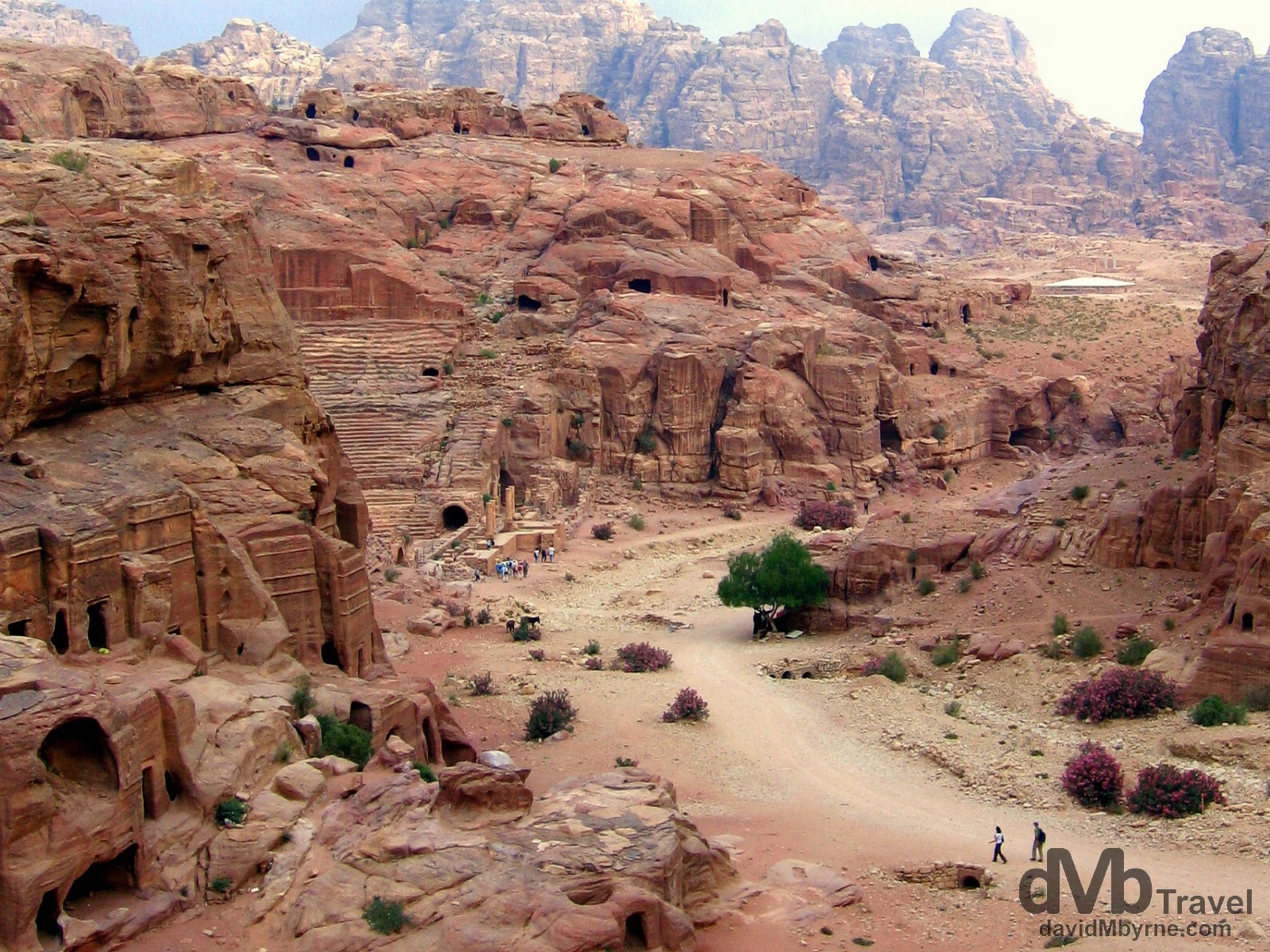 Petra, the breathtaking half-built, half-carved into the rock, fabled “rose-red city, half as old as time”, is a well-known ancient city in the south of the Middle Eastern Arab kingdom of Jordan that is famous for its rock-cut architecture and water conduit system. From approximately the 6th century BC, the city was the capital of the magnificent Nabataean Kingdom before being absorbed into the Roman Empire in 106 AD. The Romans continued to expand the city & even now, more than two centuries later, many of the stone, pillared structures of Petra still stand tall. The ruins of the city, which was designated a UNESCO World Heritage Site in 1985, became a huge tourist draw in the late 80s & early 90s after being featured in an Indiana Jones movie. Aside from being a massive tourist draw, today the site is also a vast archaeological park, one of the world’s most famous, & one that is entered through a famous, lengthy and picturesque sandstone valley known as Siq. 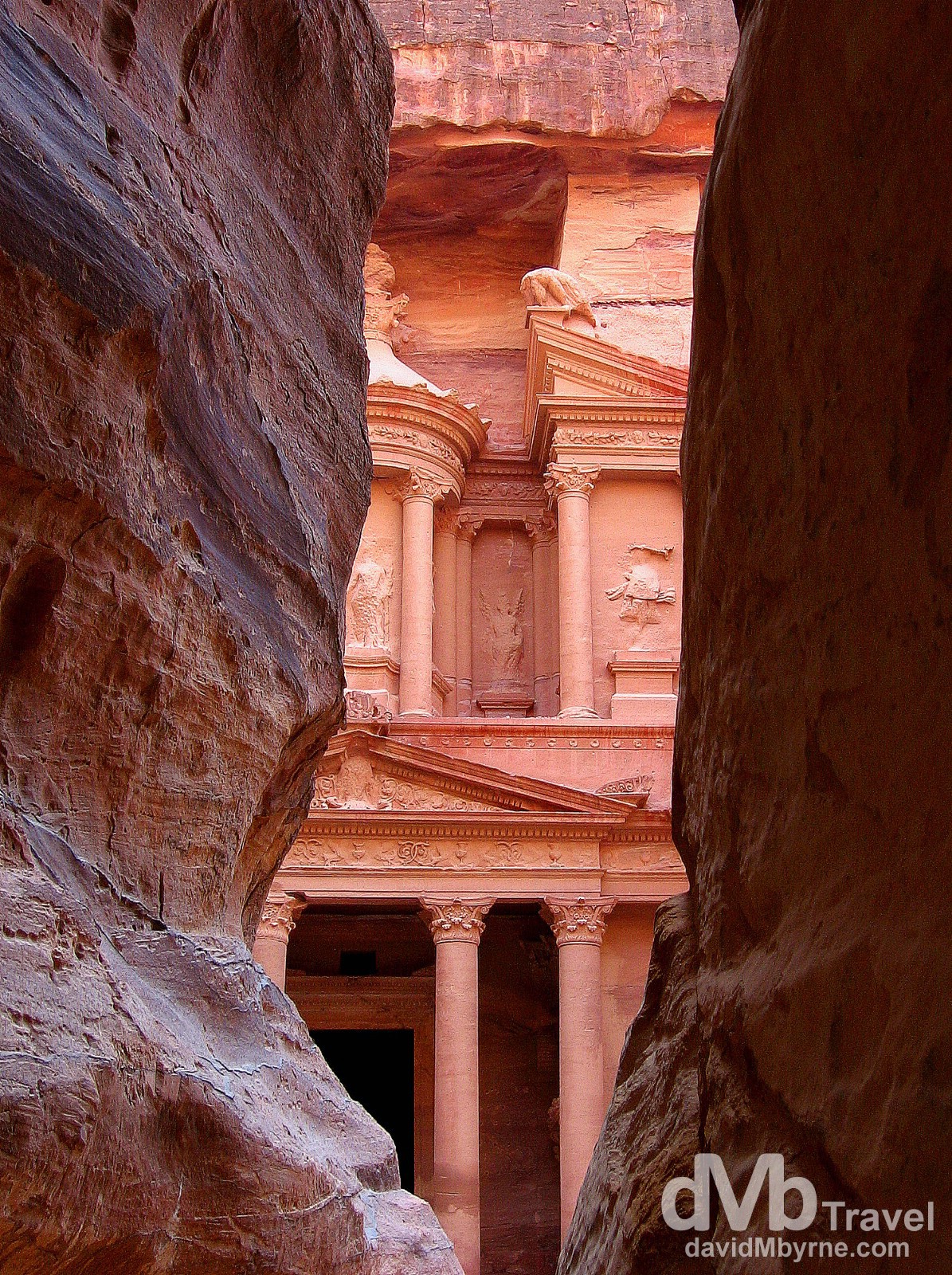 This is one of the iconic views of world travel; the first sighting of the monumental façade of Petra’s Al Khazneh, a.k.a. The Treasury, as you exit the siq, a long (almost a mile), dim & narrow (3 meters at most ), towering (90-180 meters) natural sandstone gorge that marks the only way in & out of the ancient Nabatean (ancient Semitic Arabs) trading city. This façade, hewn into the sandstone cliff, has been in my subconscious for almost 2 decades; it was featured in the 1989 movie Indiana Jones and the Last Crusade & I’ve wanted to lay my own eyes on it ever since. Having to wait that long to get here I was fearful that it would disappoint. It didn’t. It really is a sight to behold. We were one of the first tourists of the day to take in all its splendour. So few people were there in fact that we could hear the chirp of nearby birds & the echo of our voices vibrate off the rocks seemingly entombing us. Magical. Petra, Jordan. April 27, 2008. 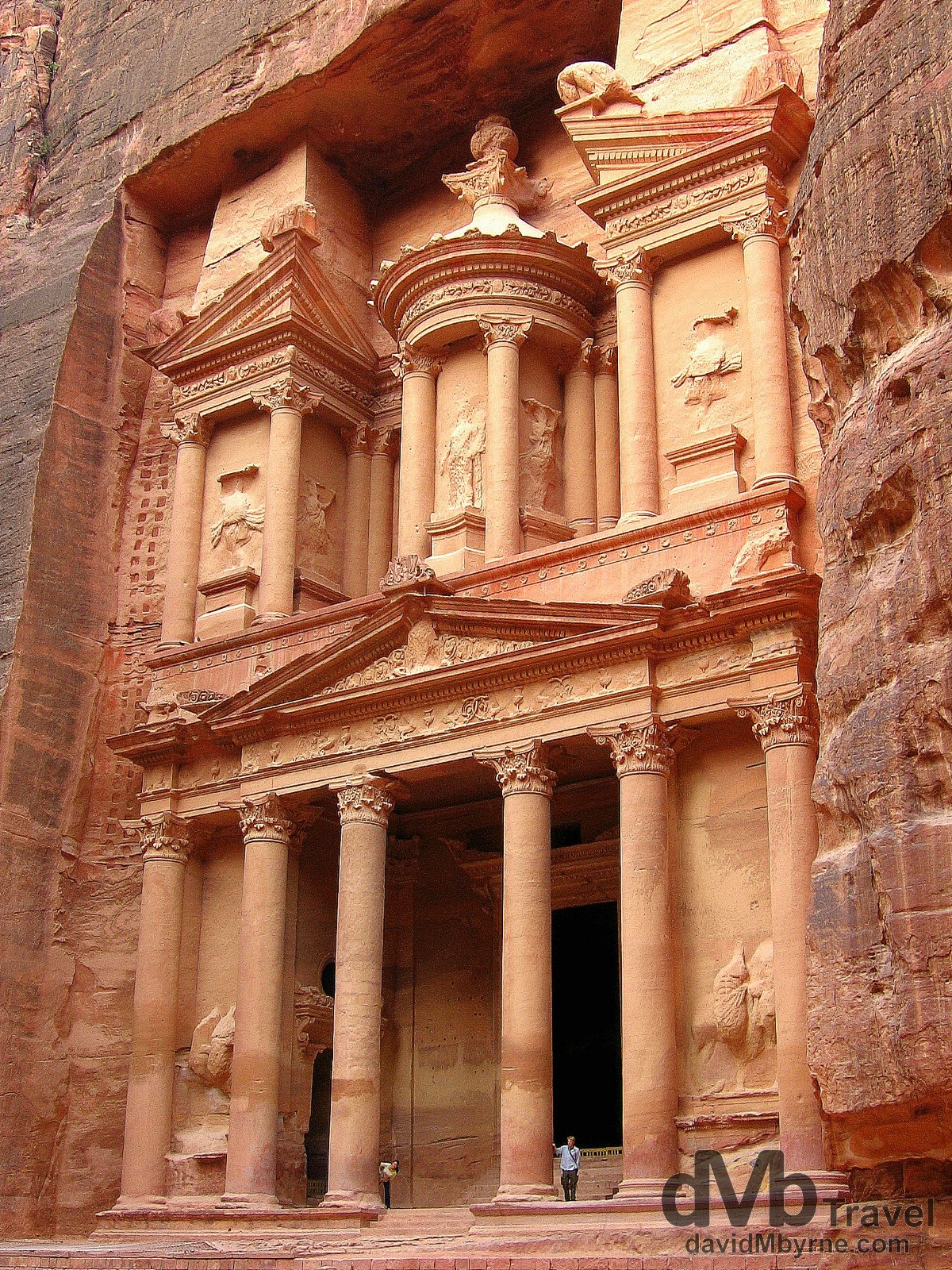 The facade of Al Khazneh, aka The Treasury, probably the most famous structure in Petra & one that is rumoured to hold the lost treasure of a Pharaoh in its ornate urn. Petra, Jordan. April 27, 2008.

Petra, surrounded by mountains riddled with passages and gorges, was situated at the crossroads between Arabia, Egypt and Syria-Phoenicia, making it an important centre for trade and commerce. This enabled the city to flourish, which it did until a catastrophic earthquake in 663 AD destroyed buildings and crippled vital water management systems. After Saladin’s conquest of the Middle East in 1189, Petra was abandoned and the memory of it was lost to the West.

The ruins remained hidden to most of the world until the Swiss explorer Johann Ludwig Burckhardt, disguised as an Arab scholar, infiltrated the Bedouin-occupied city in 1812. Burckhardt’s accounts of his travels inspired other Western explorers and historians to discover the ancient city further. The most famous of these was David Roberts, a Scottish artist who created accurate and detailed illustrations of the city in 1839. The first major excavations of the site were in 1929 after the forming of Trans-Jordan. Since that time, Petra has become by far Jordan’s largest tourist attraction & was chosen in July 2007 as one of the New Seven Wonders of the World. 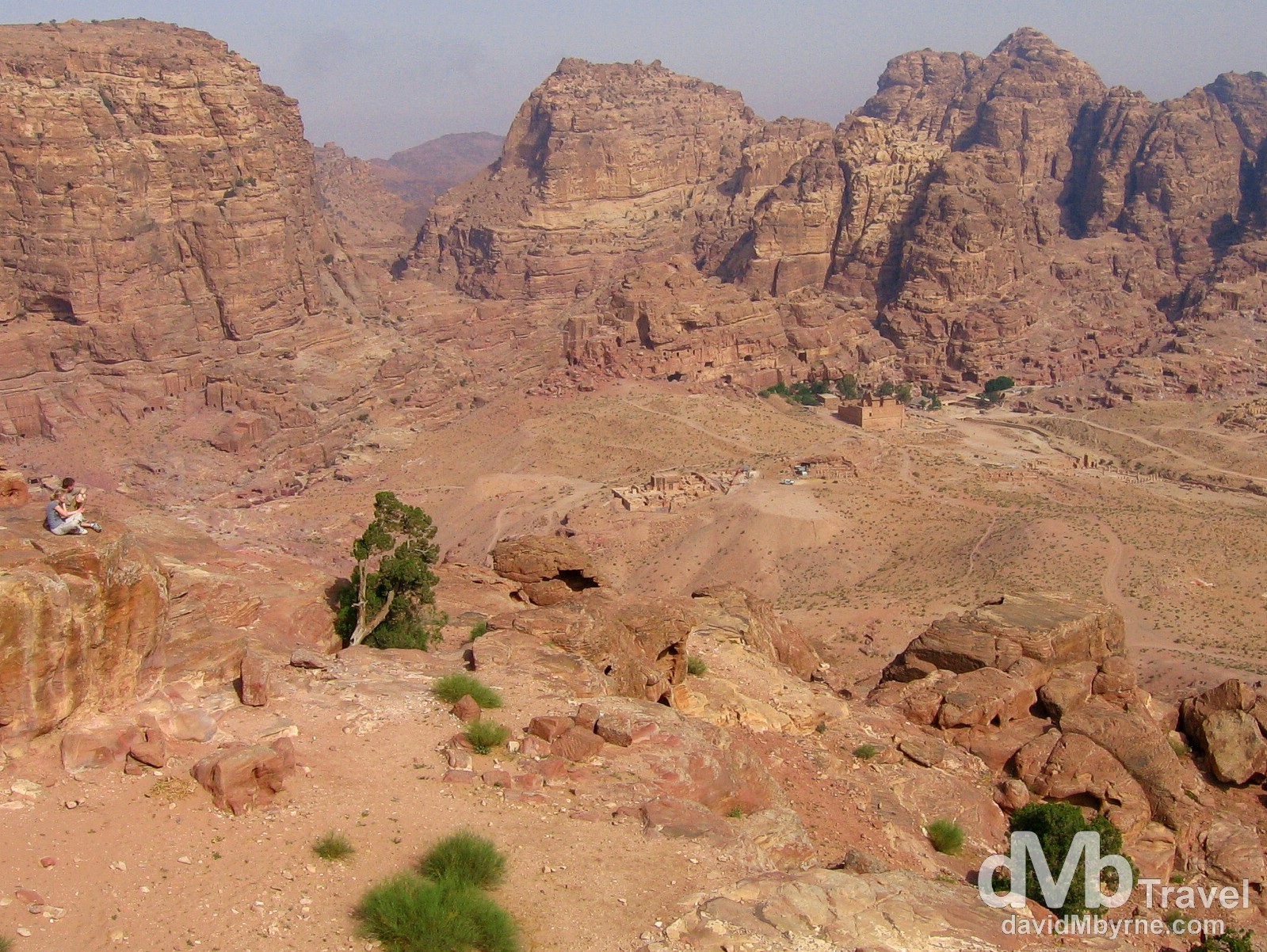 Surveying the landscape high above Petra in Jordan. April 27th 2008. 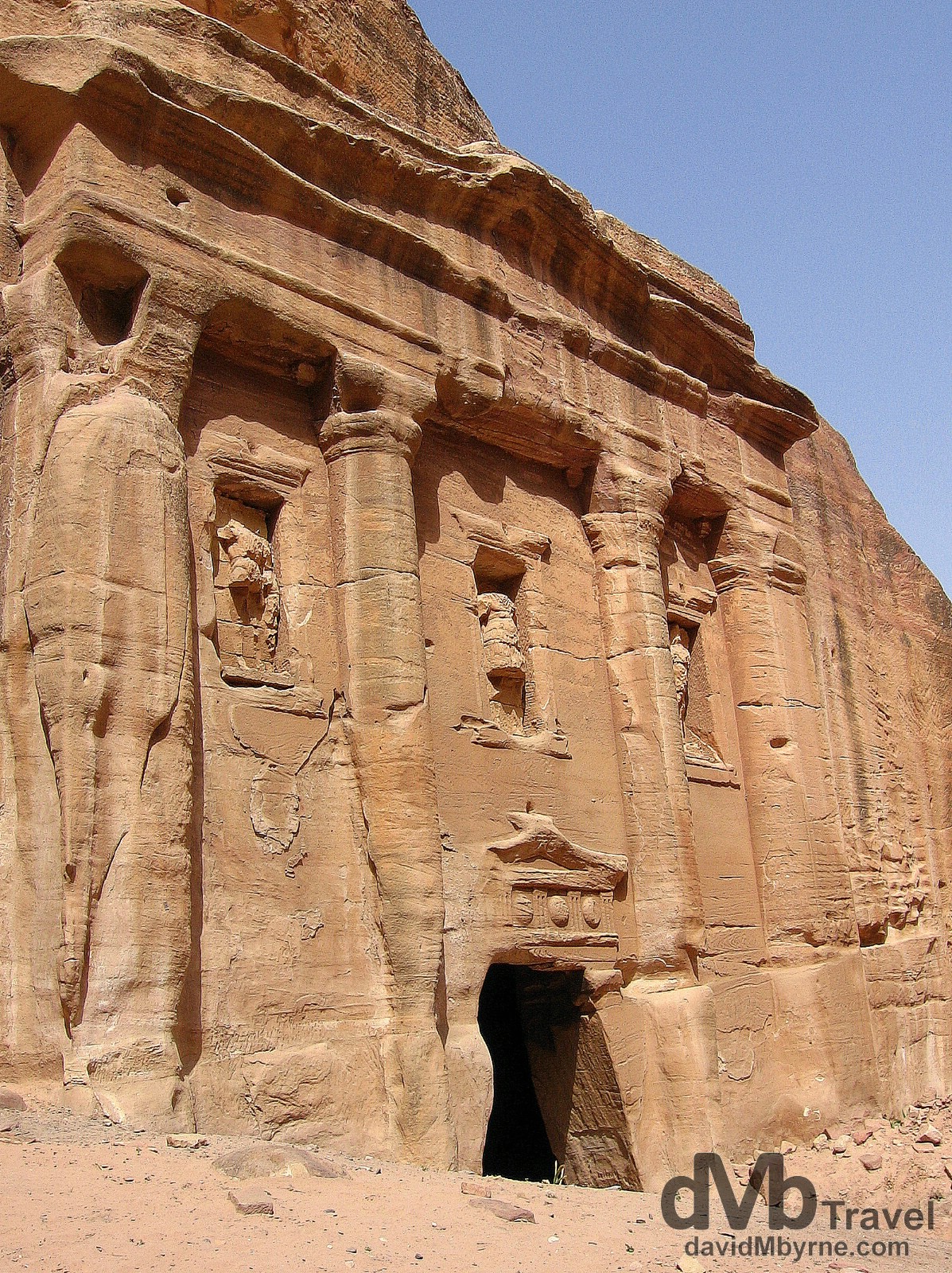 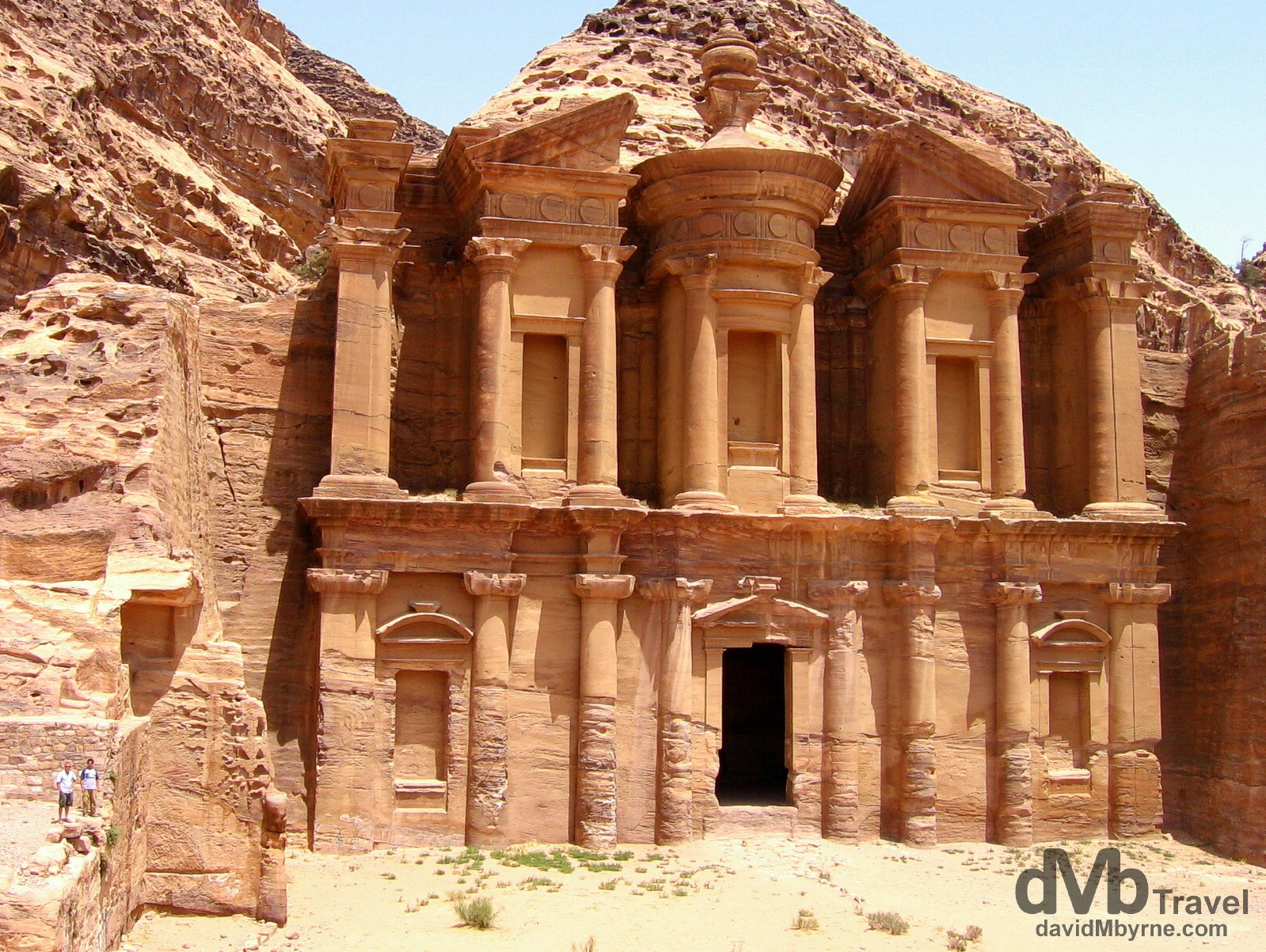 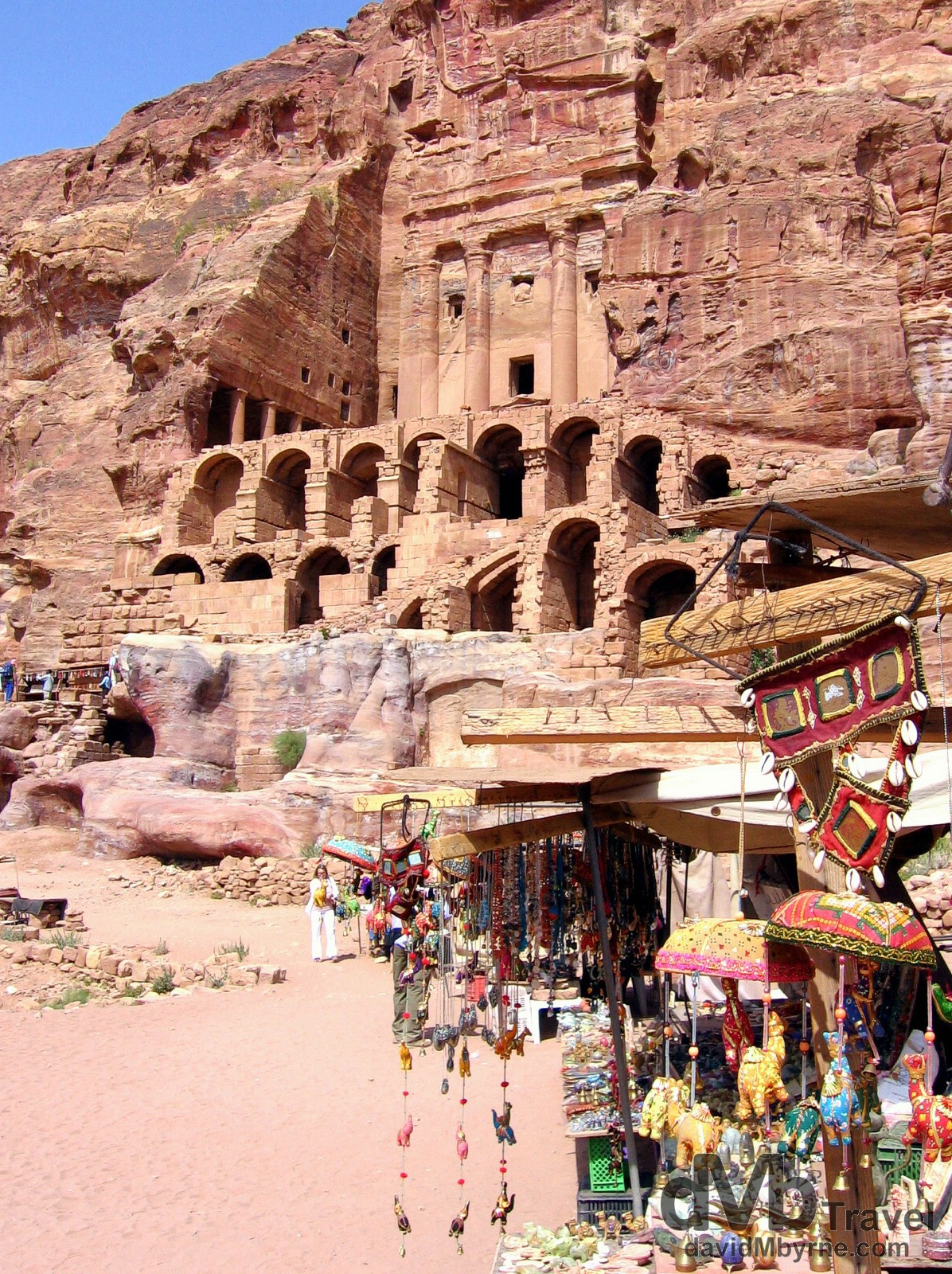 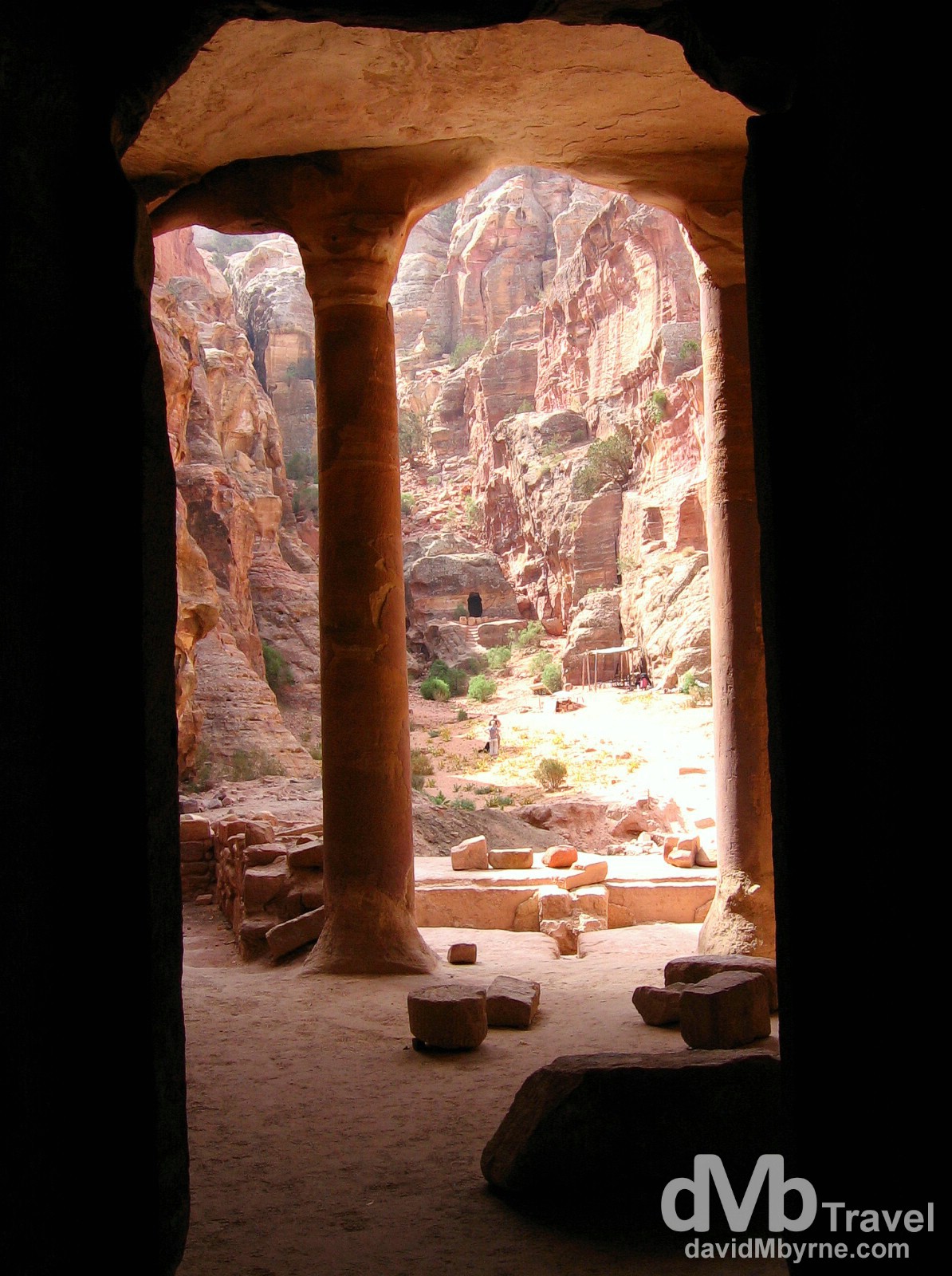 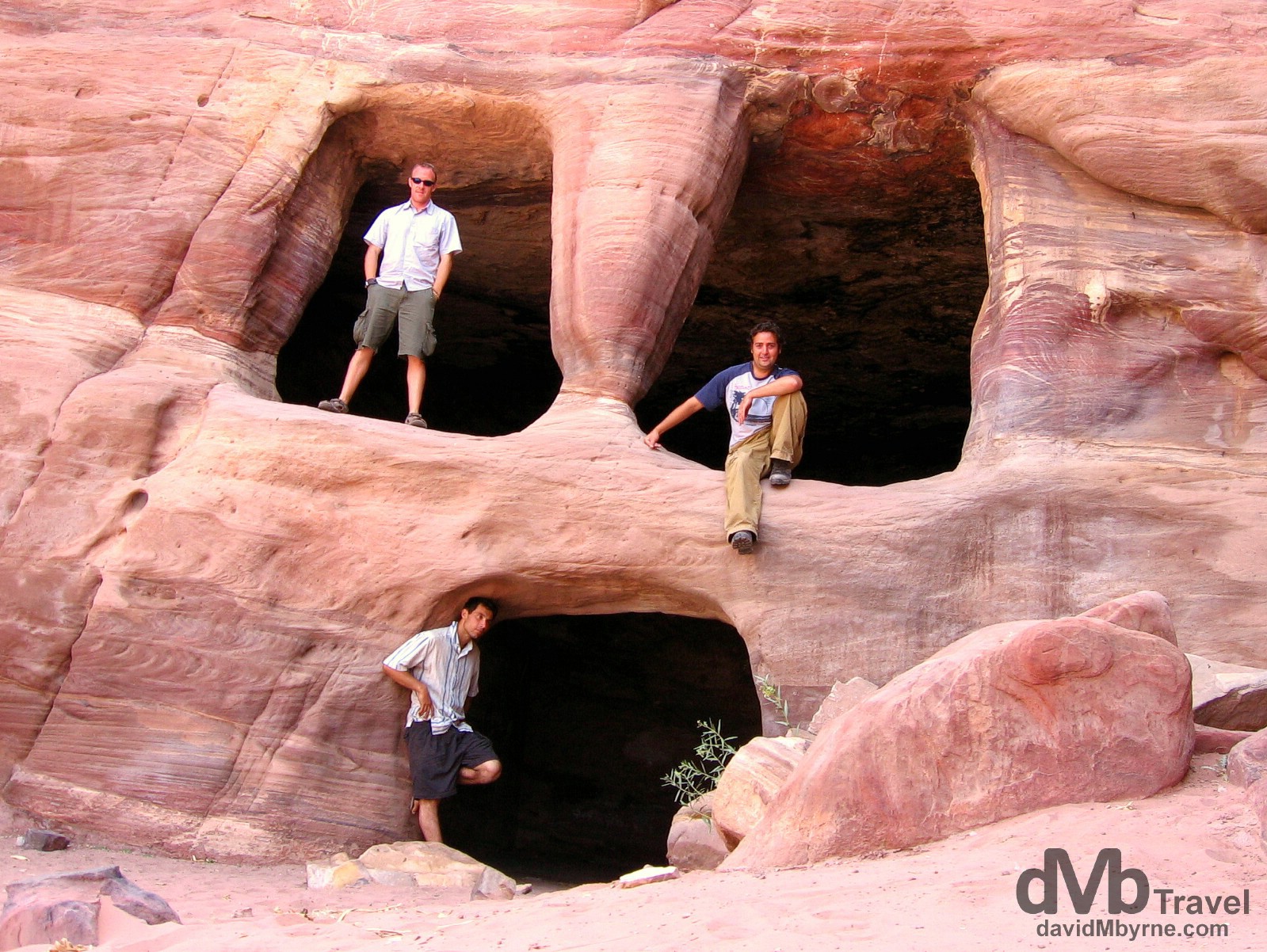 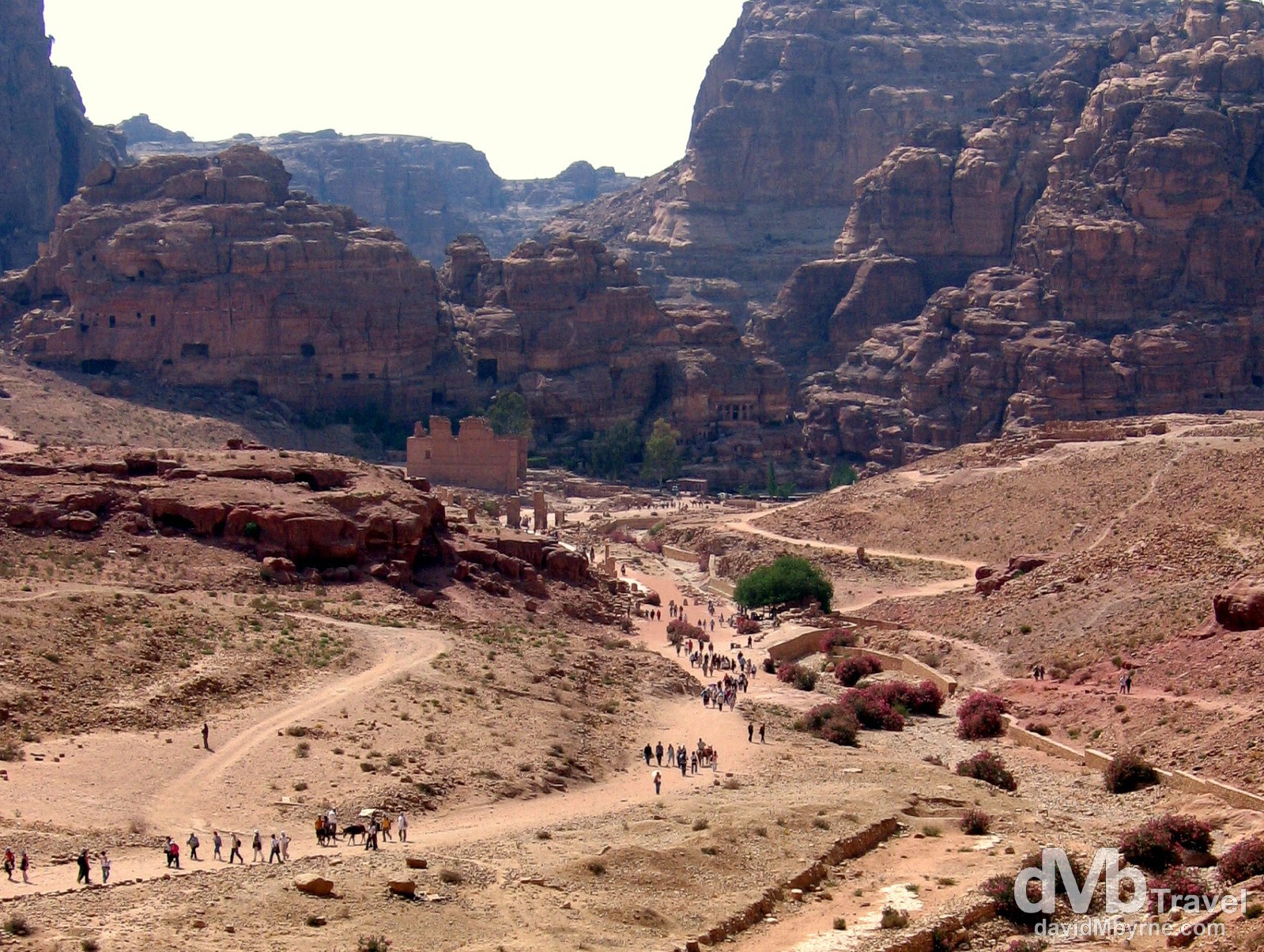