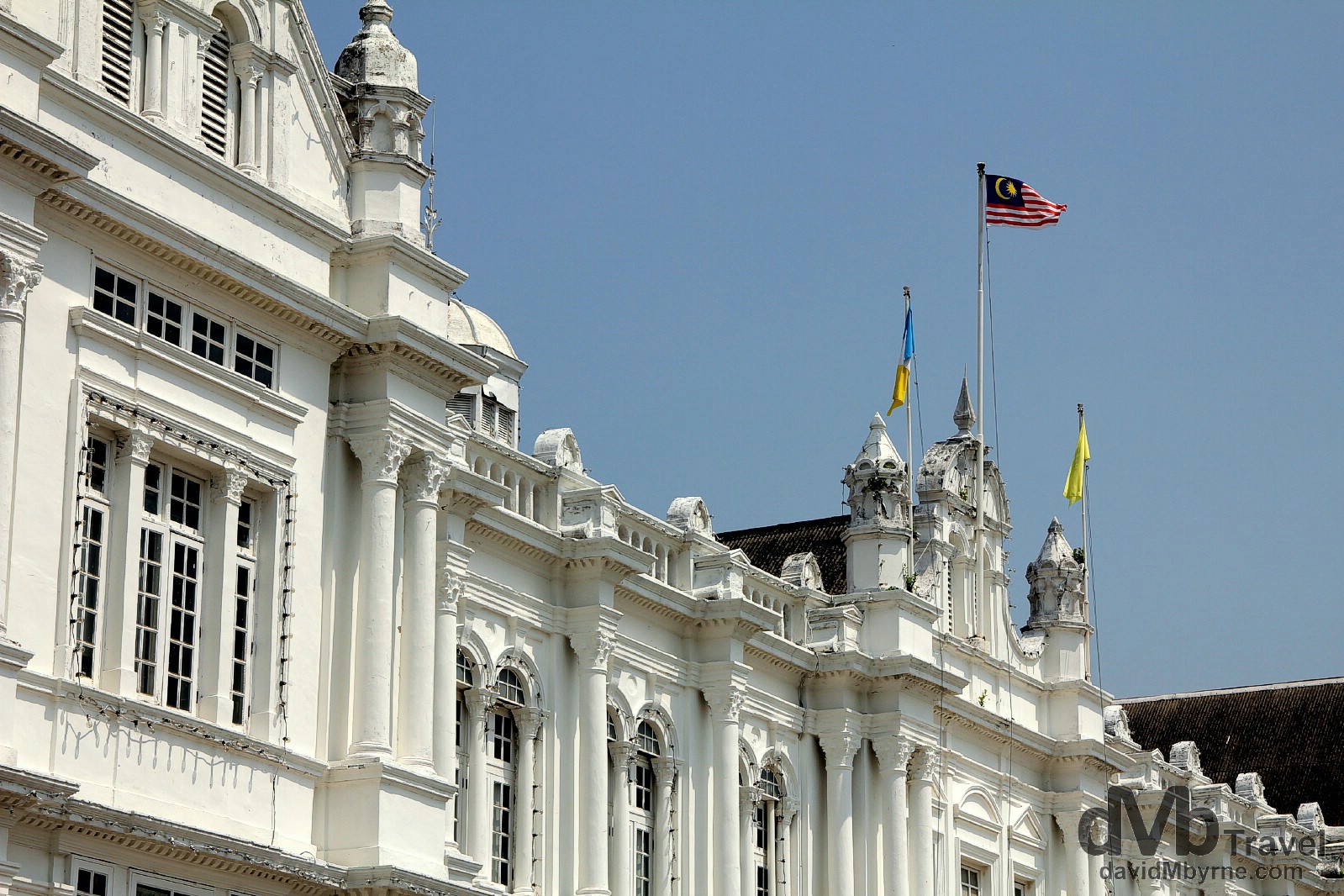 Penang in Malaysia is a 3-hour ferry ride south through the Andaman Sea from the duty-free island of Langkawi. Ceded to the British in 1791, today Penang’s UNESCO-listed capital of George Town is a bustling city of contrasts – wide, modern streets run parallel to a maze of narrow lanes where ancient trades are still practised & impressive colonial architecture is towered over by shiny high-rises. It’s an interesting place, compact enough to explore on foot with more than enough photo opportunities. 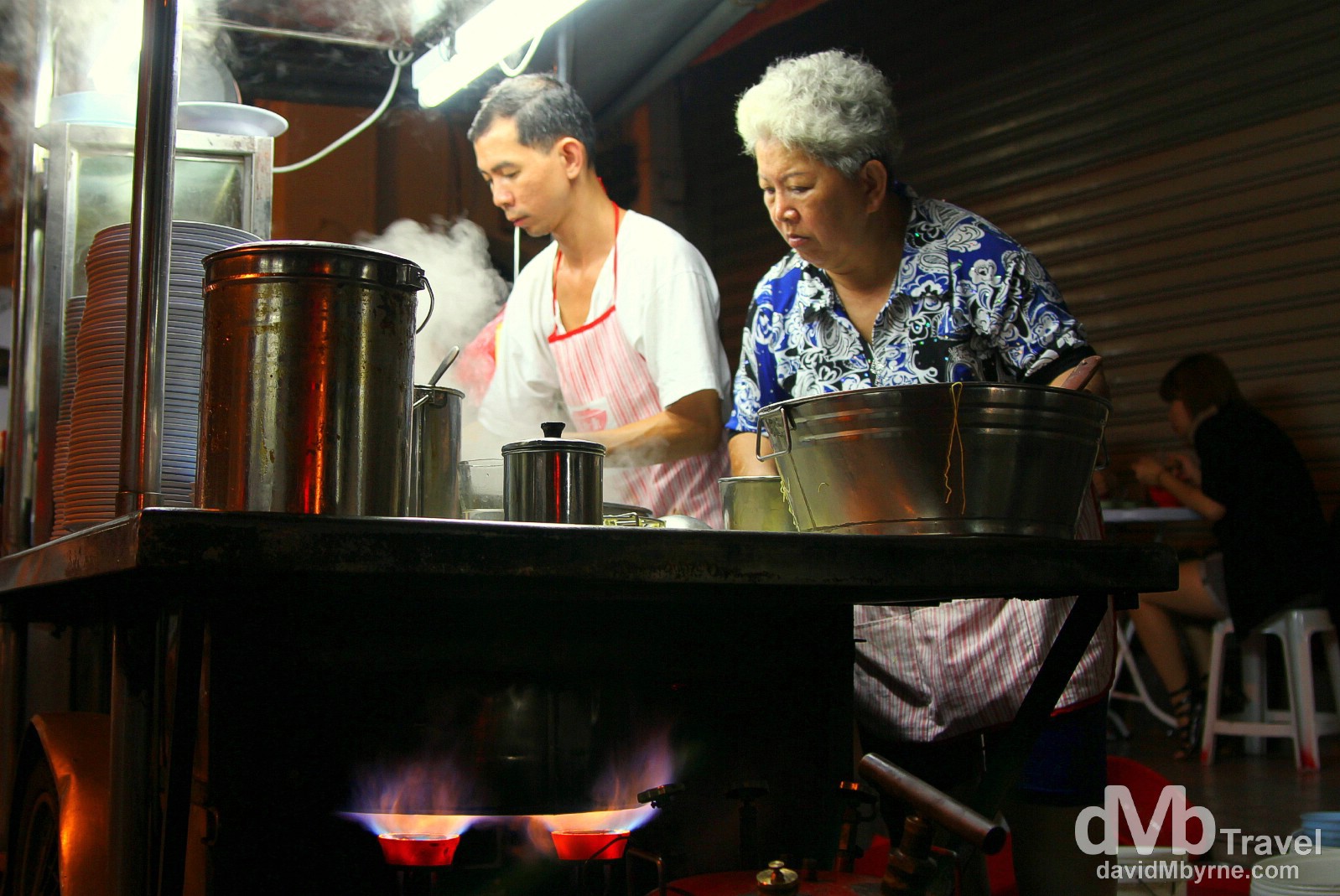 Penang is well known for its culinary delights and its street food is some of the best I’ve had while travelling. George Town’s Chinatown district is abuzz with street food vendors. It’s a great place to be hungry – not to mention wield a camera – at night. Chinatown, George Town, Penang (

In 1771 the Sultan of Kedah (this area of Malaysia) signed the 1st agreement with the British East India Company, handing trading rights to the Brits in exchange for military assistance against Siam, present day Thailand. Fifteen years later, in 1786, Capt. Francis Light, on behalf of the East India Company, took control. Five years later, in 1791, the island was formally signed over to the Brits – they used it, along with Singapore & Melacca, as trading bases as part of their South East Asian conquest. Shortly thereafter George Town, the capital, was established and the Brits got to work on a series of impressive buildings some of which still stand today.

Say what you will about them but the British certainly left impressive buildings behind wherever they set up shop. This is part of the oh-so white façade of George Town’s City Hall, one of the more impressive colonial-era buildings in the city, with the Malaysian flag flying overhead. Georgetown, Penang, Malaysia. March 24th 2012. 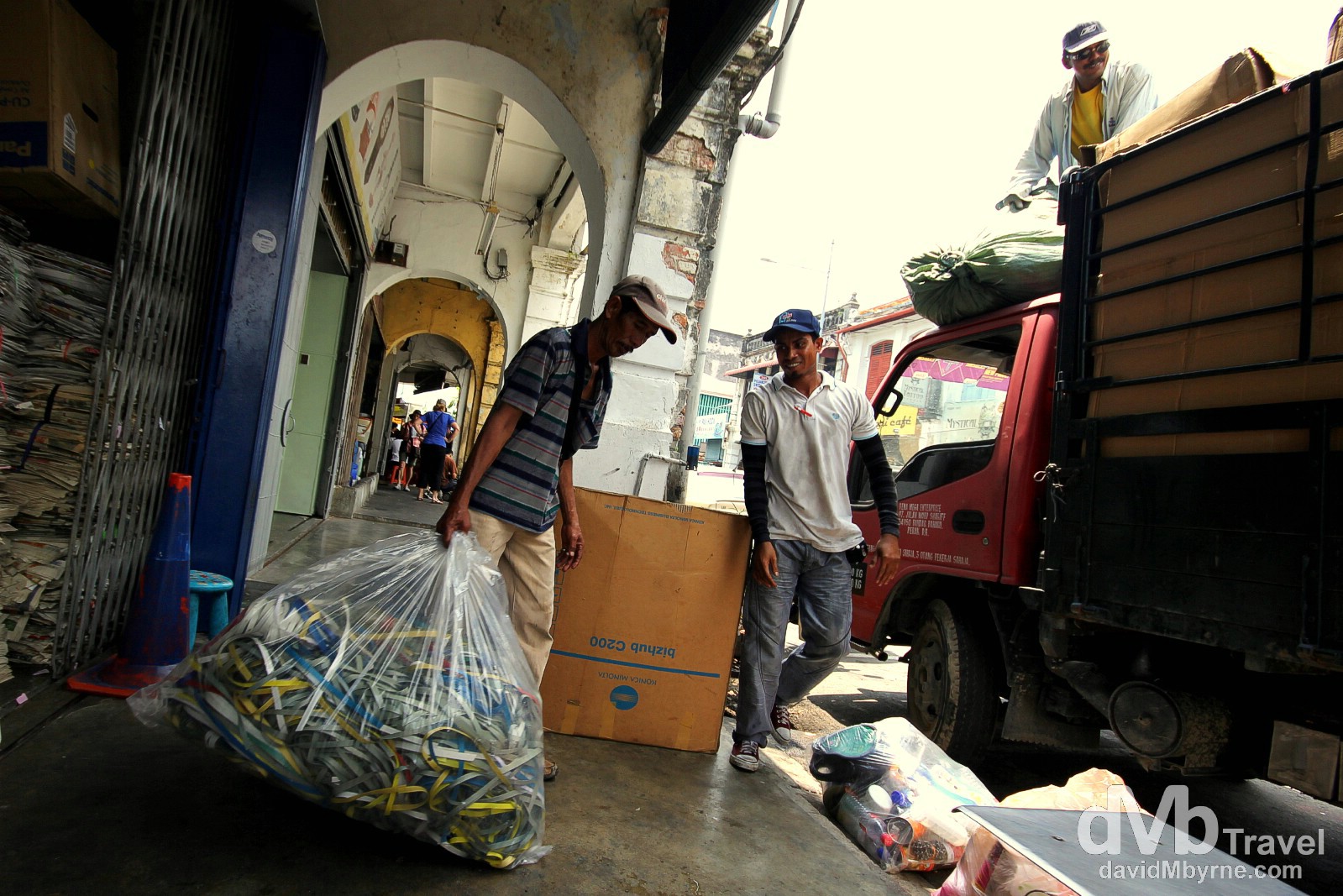 Activity on the streets of the Chinatown district of George Town. This picture shows a very prominent architectural characteristic of George Town, that of street-fronting porticos, a porch or entrance to a building consisting of a covered and often columned area. Georgetown, Penang, Malaysia. March 24th 2012.

Temple of The Azure Cloud

I paid a visit to the outskirts of George Town to the Temple of The Azure Cloud, more popularly known as the Snake Temple due to the numerous poisonous snakes that like to call the temple complex home. The temple itself wasn’t up to much – wasn’t up to much at all – but the small Snake Farm in the grounds of the temple was quite the attraction, especially considering the 5MYR (€1.20) admission. I took the following picture through the glass of an aquarium-esque holding tank for this puff adder. It had just been fed (& seemingly they only get fed once, maybe twice, a week) and the snake slowly, very slowly, ingesting the whole mouse provided me with quite the spectacle. 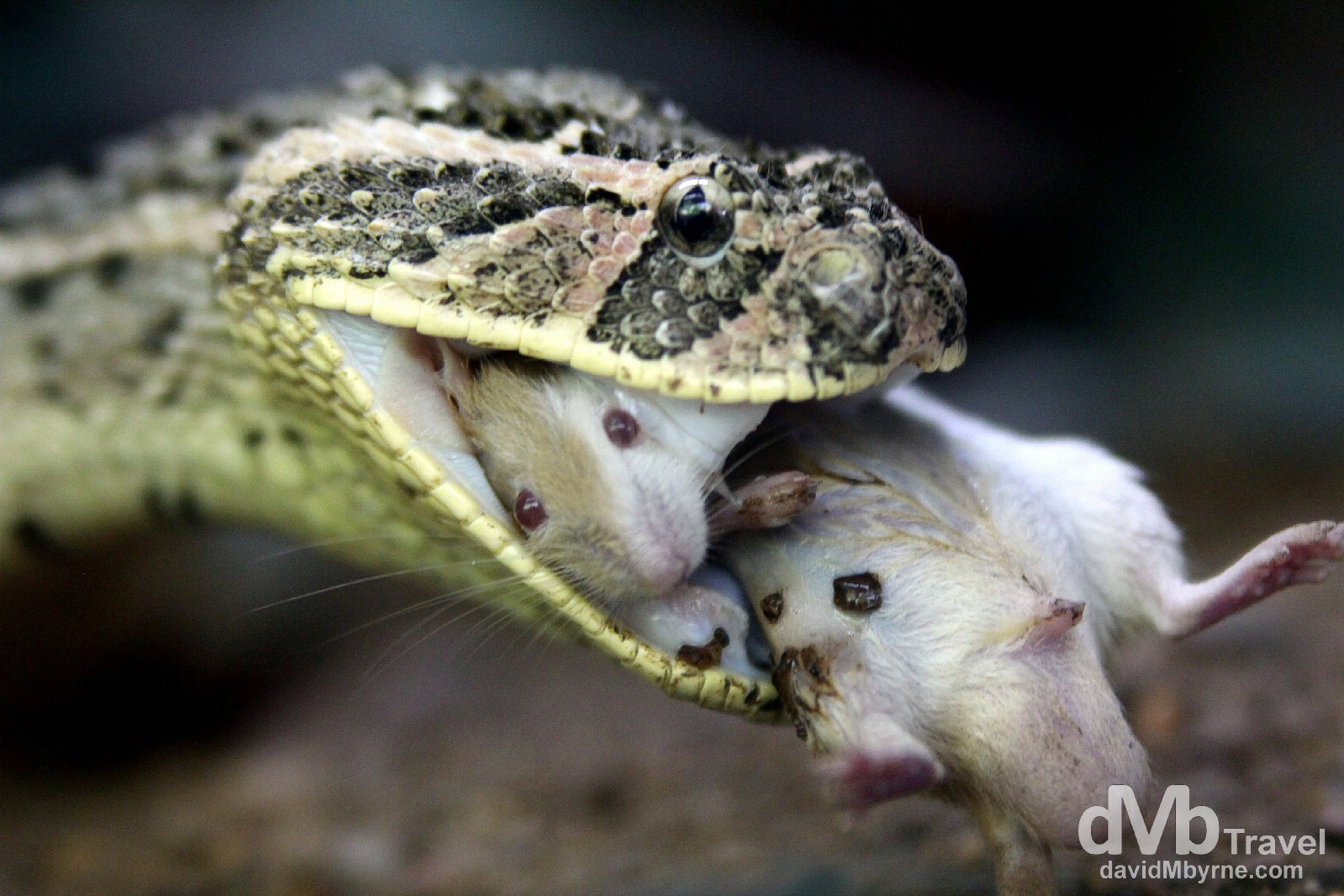 A feeding puff adder in the Snake Farm of the Temple of The Azure Cloud (aka The Snake Temple), Penang, Malaysia. March 24th 2012.

According to the inscription above its holding tank

‘the puff adder is the 2nd largest of the venomous vipers with large fangs…. they grow to a maximum of 1.8m …. & their venom is hemotoxic (causes widespread & rapid tissue damage & organ degeneration) & lethal.

I guess the poor mouse never stood a chance.

It wasn’t just snakes on-show at the Snake Farm. It has a few less-than-lethal but very photogenic iguanas on display too. 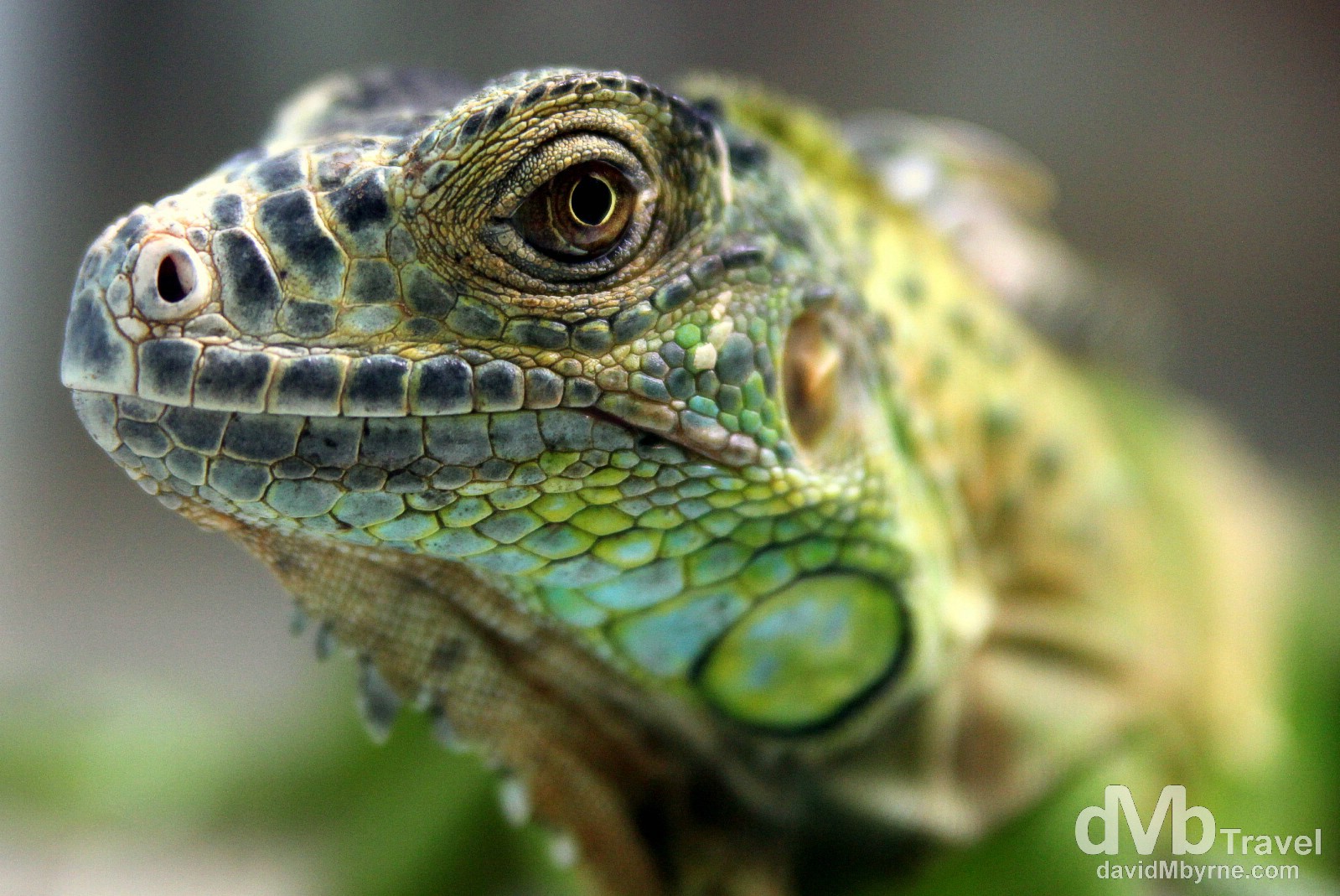 An iguana in the Snake Farm of the Temple of The Azure Cloud (aka The Snake Temple), Penang, Malaysia. March 24th 2012