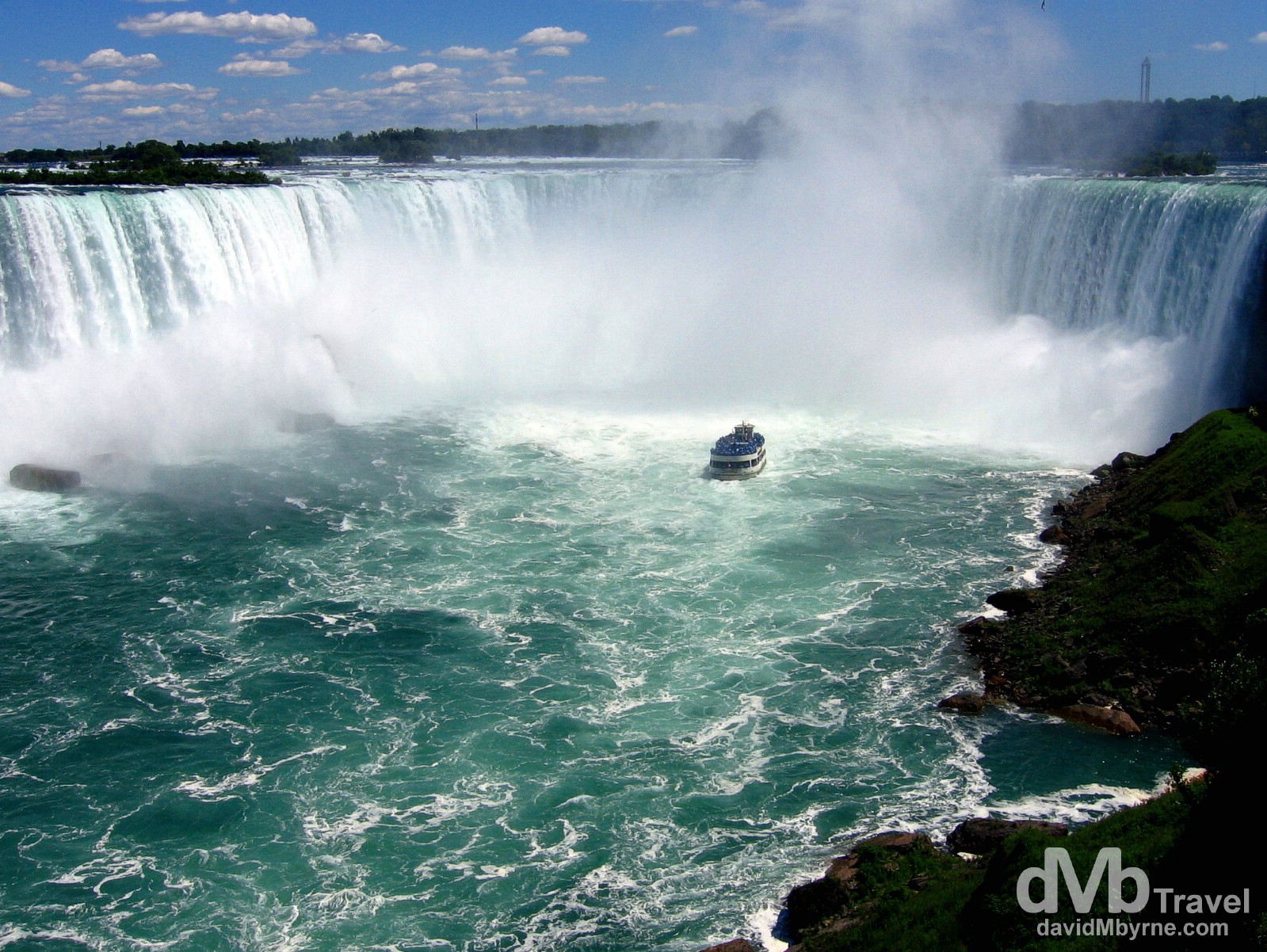 Niagara Falls is the collective name for three waterfalls that straddle the international border between Canada and the United States or, more specifically, between the Canadian province of Ontario and the US state of New York. Spanning the Niagara River between Ontario and upstate New York, the thundering falls are Canada’s biggest tourist draw, attracting 13 million people annually. Although there are falls that are taller, in terms of sheer volume Niagara Falls, the most powerful falls in North America, are hard to beat: the equivalent of more than a million bathtubs of water goes over the falls every minute. On the US side of the Niagara River are The American Falls & the pretty Bridal Veil Falls, both of which crash onto mammoth rocks below that have fallen due to erosion. However, the real crowd pleaser is the grander, far more powerful Canadian Falls, a.k.a. Horseshoe Falls, which plunge over 50 metres into the Maid of the Mist Pool which is indeed misty, clouding the views of the falls from afar.

A Maid of The Mist tour boat at the foot of The Horseshoe Falls of Niagara Falls, the most powerful waterfall in North America – 90% of the flow of the Niagara River goes over the falls, two-thirds of which lie on the Canadian side of the US/Canada border. The closest access to the falls on the Canadaian side is at the viewing platform of the Table Rock Information Centre. Niagara Falls (

Standing & peering into the 50 metre (167 ft) abyss, with the immense rumbling power of Niagara Falls all around you & swathed in mist blowing off the falls, it’s quite hard to fathom that anyone who was ever unfortunate enough to go over the falls, for whatever reason, would survive (over 5,000 souls have not). But remarkably people have. A schoolteacher called Annie Taylor first devised the successful padded-barrel method in 1901, promoting a rush of barrel have-a-go heroes that continued into the 1920s. In the 1980s, 5 daredevils successfully took the plunge including Karl Soucek, who later died in another barrel stunt in Houston, and two locals who took the plunge lying head to head. In the 90s the madness got worse when a stuntman startled onlookers by going over the edge of the falls in a kayak. He was so confident he made dinner reservations for that night but is now paddling the great white water in the sky. In 1995 another daredevil went over on a jet ski. He might have made it had his rocket-propelled parachute opened. It didn’t. Most recently, in 2003 an American by the name of Kirk Jones became the first person in recorded history to go over the falls unaided and survive. During his court appearance his brother claimed “he (Kirk) didn’t really have a lot going for him”. The judge agreed and ordered Jones never to set foot in Canada again. Life soon picked up for Jones who was lured by a $100,000 contract with a Texas circus with the irresistible opportunity to be ‘the world’s greatest stuntman.’ The only person who took a trip over the falls accidentally had the good fortune to survive the ordeal. He was Roger Woodward, a.k.a. The Niagara Falls Miracle, a 7-year-old boy from Tennessee who surged over from a tipped boat upstream in 1960, doing so without breaking a bone. 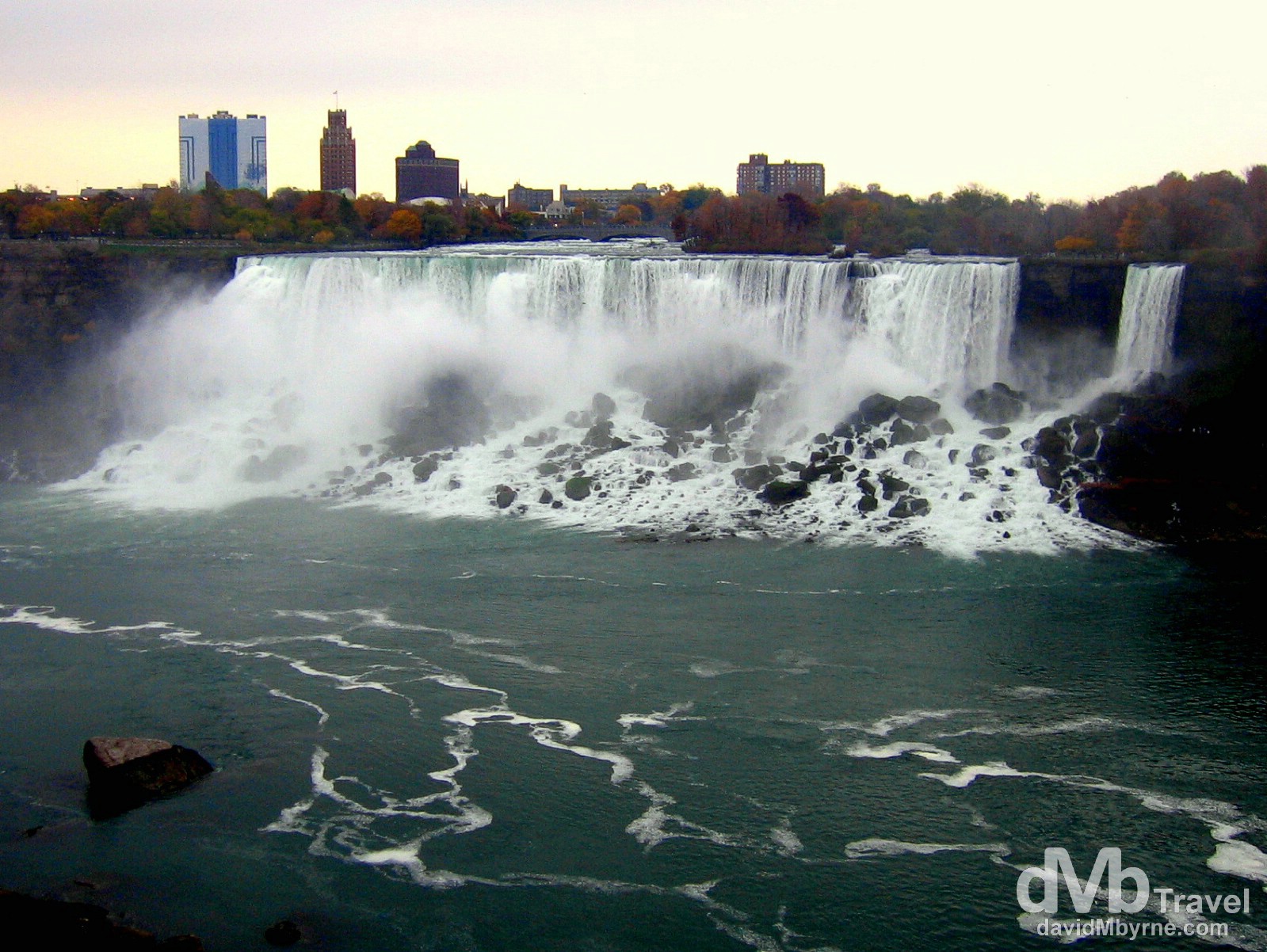 The town of Niagara Falls is adjacent to the falls themselves, the town & the falls being separated by Queen Victoria Park. The town is split into two distinctive areas – the older commercial area where locals go about their business and the other largely overdeveloped area nearest to the falls. This area, Clifton Hill, has been developed for tourists and boasts a jaw-dropping array of tacky, crass, artificial attractions – here you’ll find the likes of Ripley’s Believe It or Not, Madame Tussaud’s Wax Museum, & The Criminals Hall of Fame. They, together with the casinos, hotels, restaurants, fast-food joints, bars and towers of neon, all combine to create a sort of (very) poor man’s Las Vegas – it, Clifton Hill, is even a hit on the honeymoon circuit, leading it to be humorously but disparagingly titled a spot ‘for newlyweds and the nearly deads’. Viagra Falls anyone? Thankfully the real attraction is only a brief stroll away through Queen Victoria Park, from where you can hear the rumbling roar of the falls well before laying eye on them.