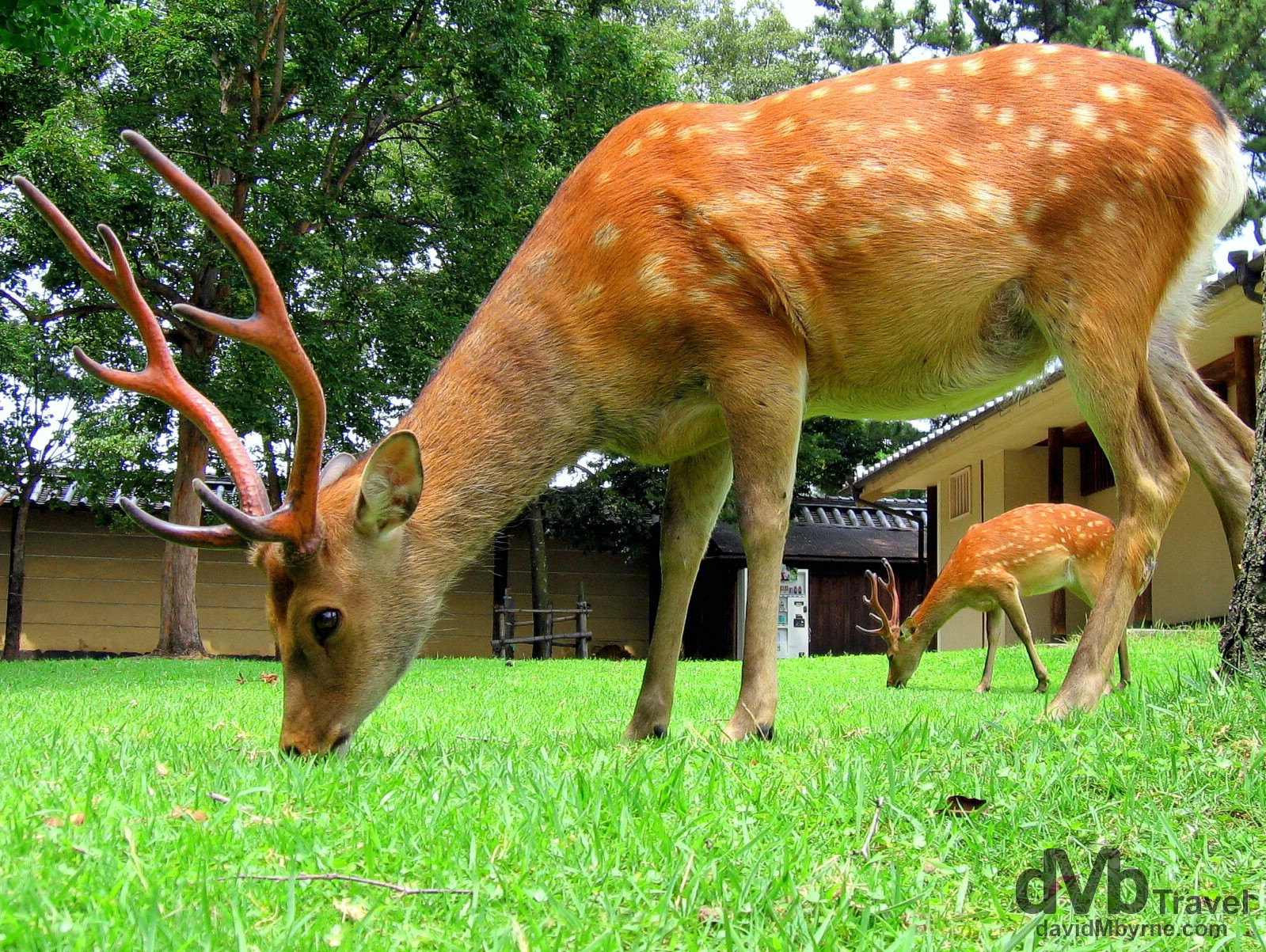 Before Kyoto became the capital of Japan in 794 AD the honour was held by Nara, a town some 35 kilometres south of Kyoto in the Kansai region of the country. This is an area which prides itself on being the birthplace of Japanese culture. The city’s temples and shrines, part of the the present-day UNESCO listed Historic Monuments of Ancient Nara, predate even those in Kyoto but because it is less well-known than its neighbour it tends to be quieter and more serene. During the 7th and 8th centuries Buddhism became firmly established within Japan under the patronage of court nobles who sponsored magnificent temples and works of art, many of which have survived to this day. Fortunately, history subsequently left Nara largely to its own devices and it’s now a relaxed, attractive place set against a backdrop of wooded hills. The city’s greatest draw – not counting the city’s free-roaming heavenly deer (see below) – is undoubtedly the monumental bronze Buddha of the Todai-ji Temple, itself an attraction – it is touted as the largest wooden building in the world. 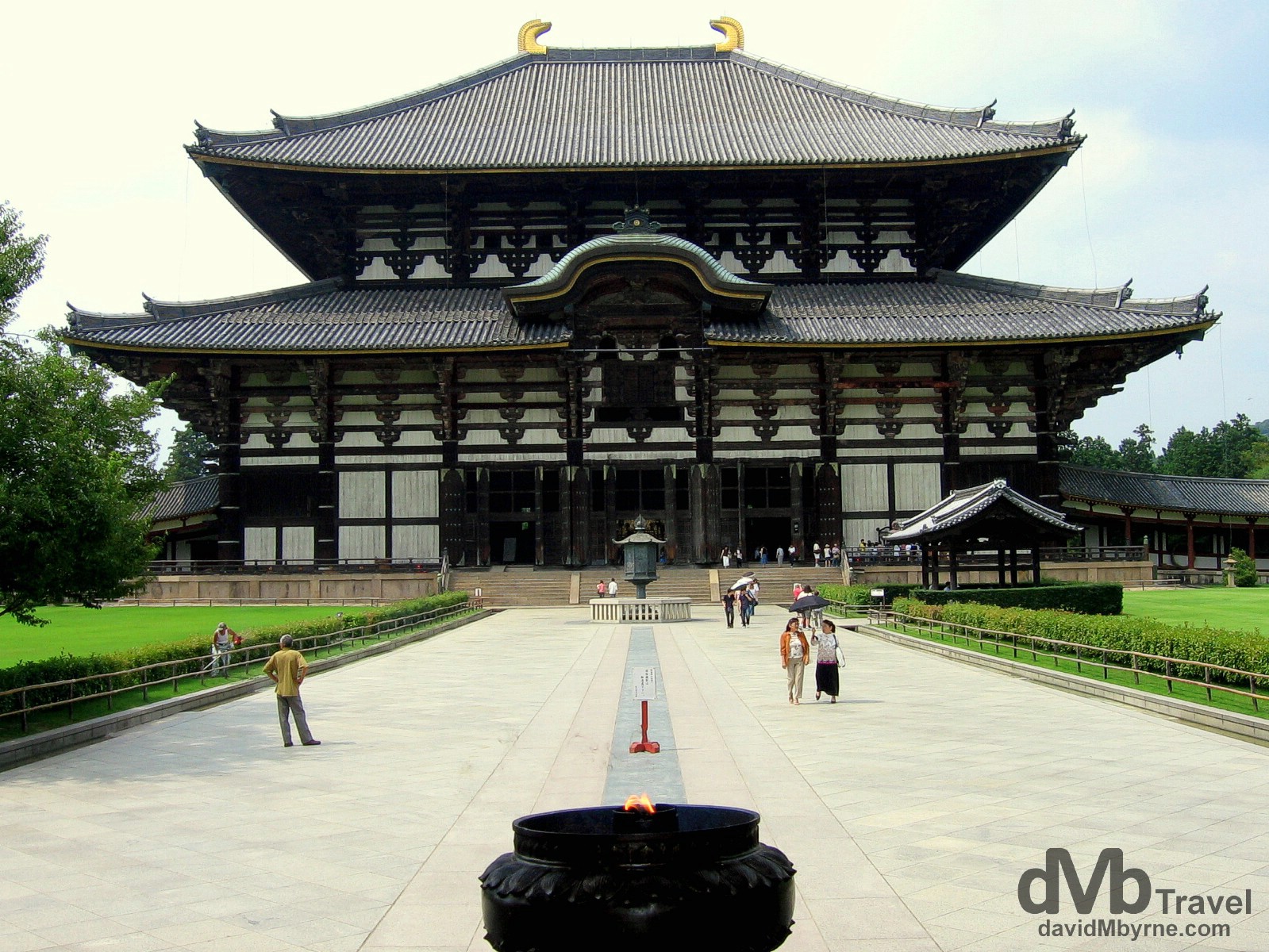 The Todai-ji Temple, part of the present-day UNESCO listed Historic Monuments of Ancient Nara, was founded by Emperor Shomu in 745 to protect against the horrible epidemics which were commonplace at that time and to consolidate the power of the Imperial throne. The temple took more than 15 years to build & its main hall is touted as the world’s largest wooden building, even though it was rebuilt in 1790 at only two-thirds of the original size. Nara ( 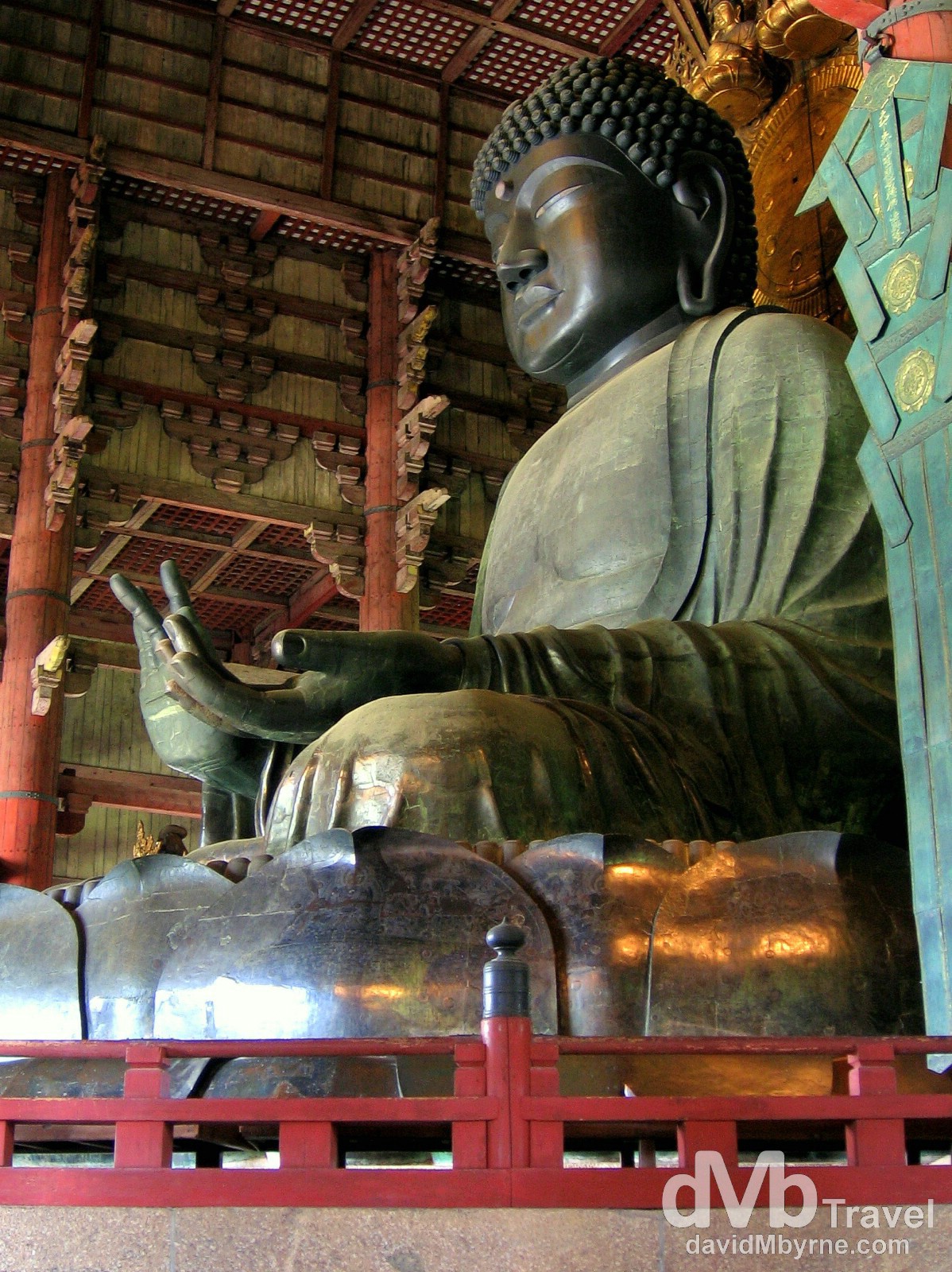 The Daibutsuden (Great Buddha Hall) of the Todai-ji Temple houses the largest bronze statue in Japan. The 15-meter-tall blackened figure sitting on a lotus throne depicts Rushana, later known as Dainichi Nyorai (The Cosmic Buddha). This statue is commonly know as the “Great Buddah of Nara” and is perhaps the city’s most famous attraction. The completion of the statue was an extraordinary achievement. After several attempts at casting the statue failed, it was finally dedicated in 752. The Emperor Shomu, his wife the Empress Komyo, and the reigning Empress Kogen all gathered to dedicate the statue by “opening his eyes”. An Indian priest stood on a specially built platform and painted in the eyes using a gigantic brush. From the end of this brush were hung coloured strings which ran down to the VIPs below, enabling them to take part in the ceremony as well. Also in attendance were local monks, numbering in the hundreds, as well as ambassadors from China, India and more distant places. The guests brought a dazzling assortment of gifts many of which are very well preserved and still on display in the nearby Shoso-in treasury. Todai-ji Temple, Nara, Honshu, Japan. July 19th, 2005.

The Todai-ji Temple is set in Nara Park (Nara Koen), a large park established in 1880 that is home to hundreds of freely roaming deer. 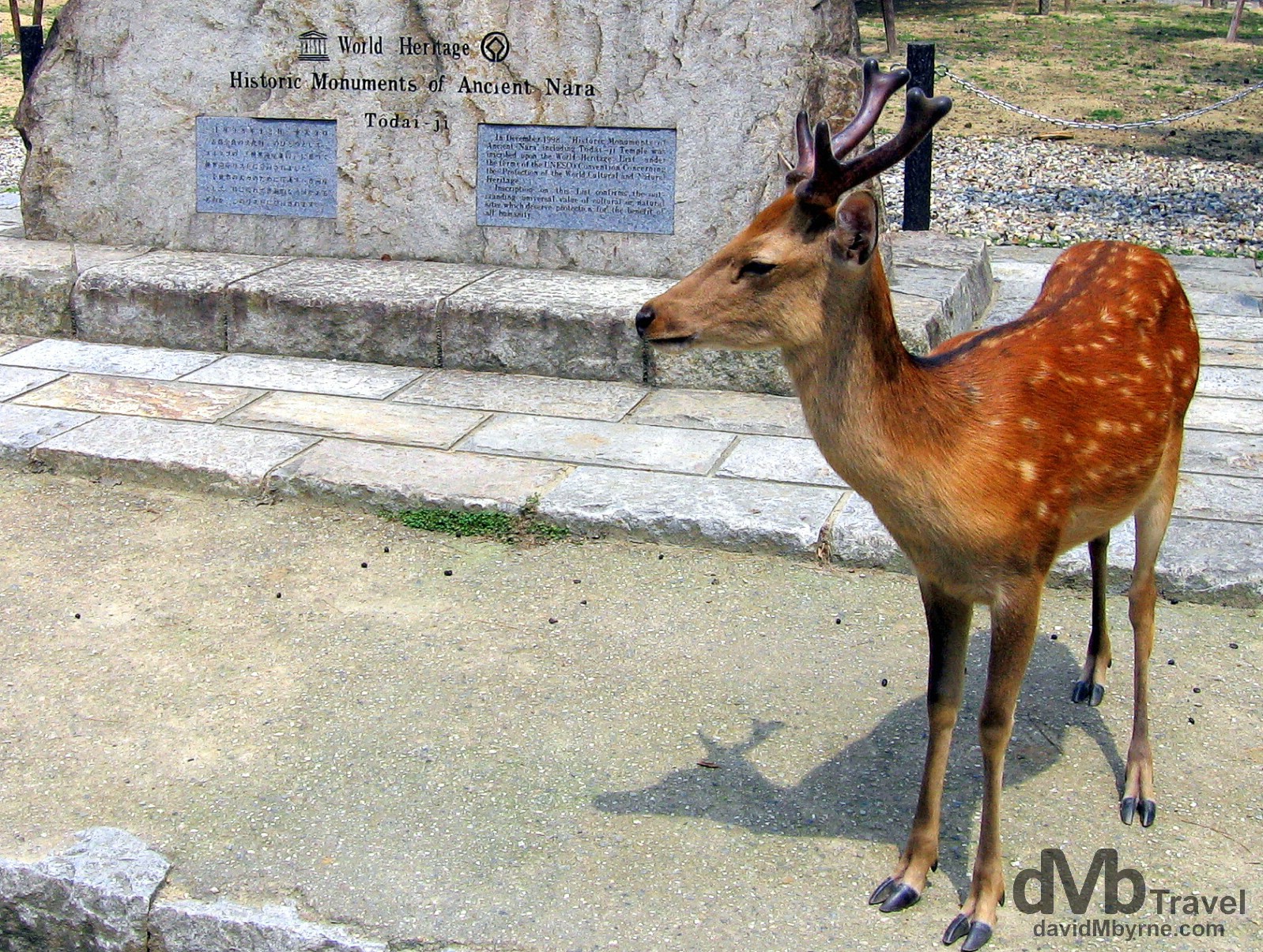 According to the legendary history of Kasuga Shrine, a mythological God Takemikazuchi arrived in Nara on a white deer to guard the newly built capital of Heijo-kyo. Since then the deer have been regarded as heavenly animals, messengers of the Gods in Shinto who protect the city. They have even been designated a National Treasure, something that doesn’t seem to harm their appetite – snack vendors in the park sell small biscuits to visitors who feed the deer en route through the park to the Todai-ji Temple. Nara Koen (Park), Nara, Honshu, Japan. July 19th, 2005.