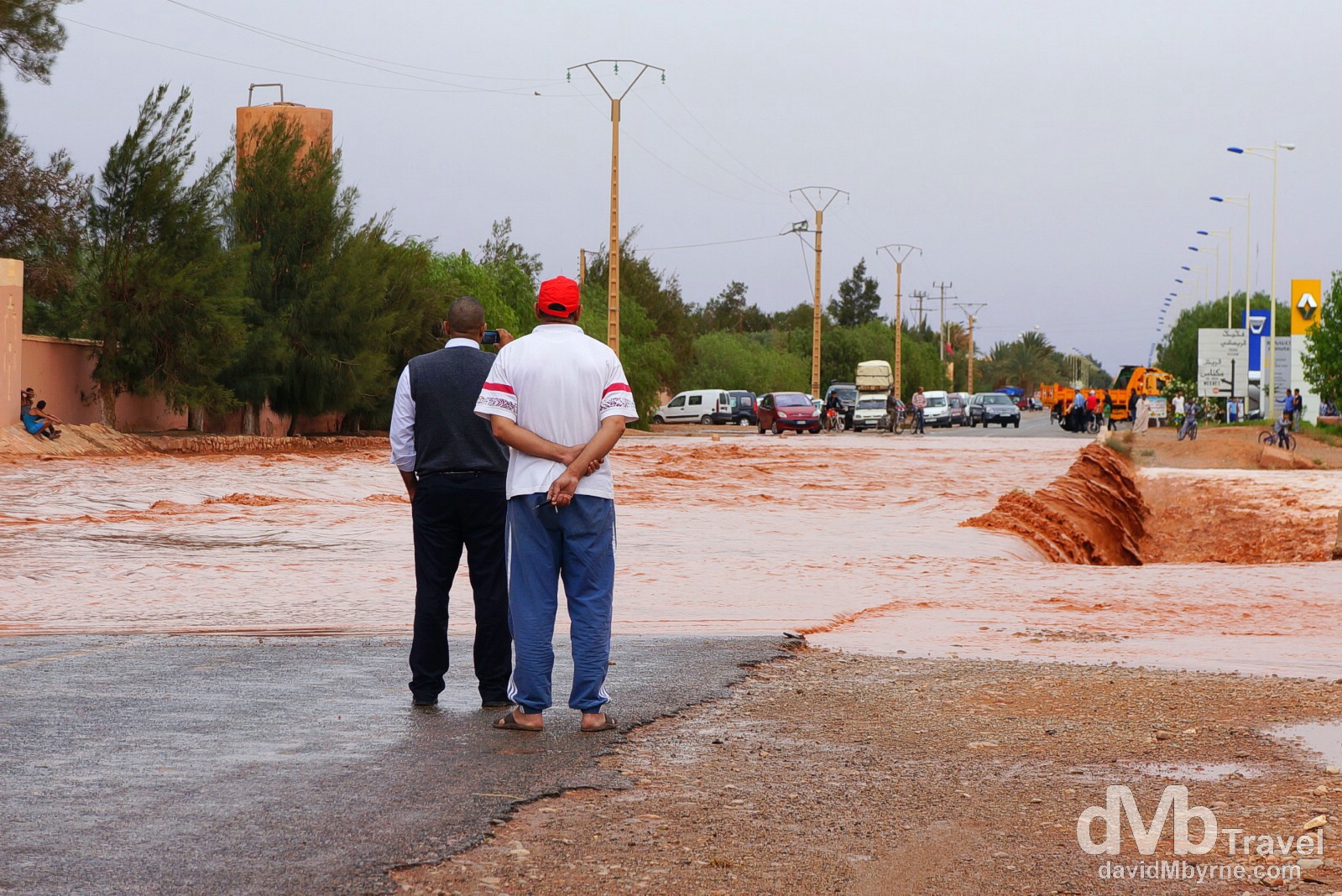 I‘m in a town called Er Rachidia in northeastern Morocco. I’m not a million miles (60 kilometres or so) from the closed border with Algeria & even closer to the Moroccan Sahara, my next port of call on this my ongoing Moroccan odyssey. The last week of Moroccan travel has seen me making my way from Marrakesh across the Atlas Mountains & through the Moroccan pre-Saharan southern oasis. I’ve been getting around thanks to a combination of bus, minibus & grand taxi, the large, Cold War-era Mercedes Benz that are somehow still plying Moroccan road & that somehow 6 Moroccans – or 5 Moroccans & an Irishman – manage to squeeze into at any one time. Distances haven’t been great but there has still been a lot of sitting around in cafes waiting for transport to fill (transport over here only moves when full) or by the side of the road waiting for transport to come along – you’ll eventually get to where you want to go in Morocco but my advice is that you best not be in any kind of hurry to get there. 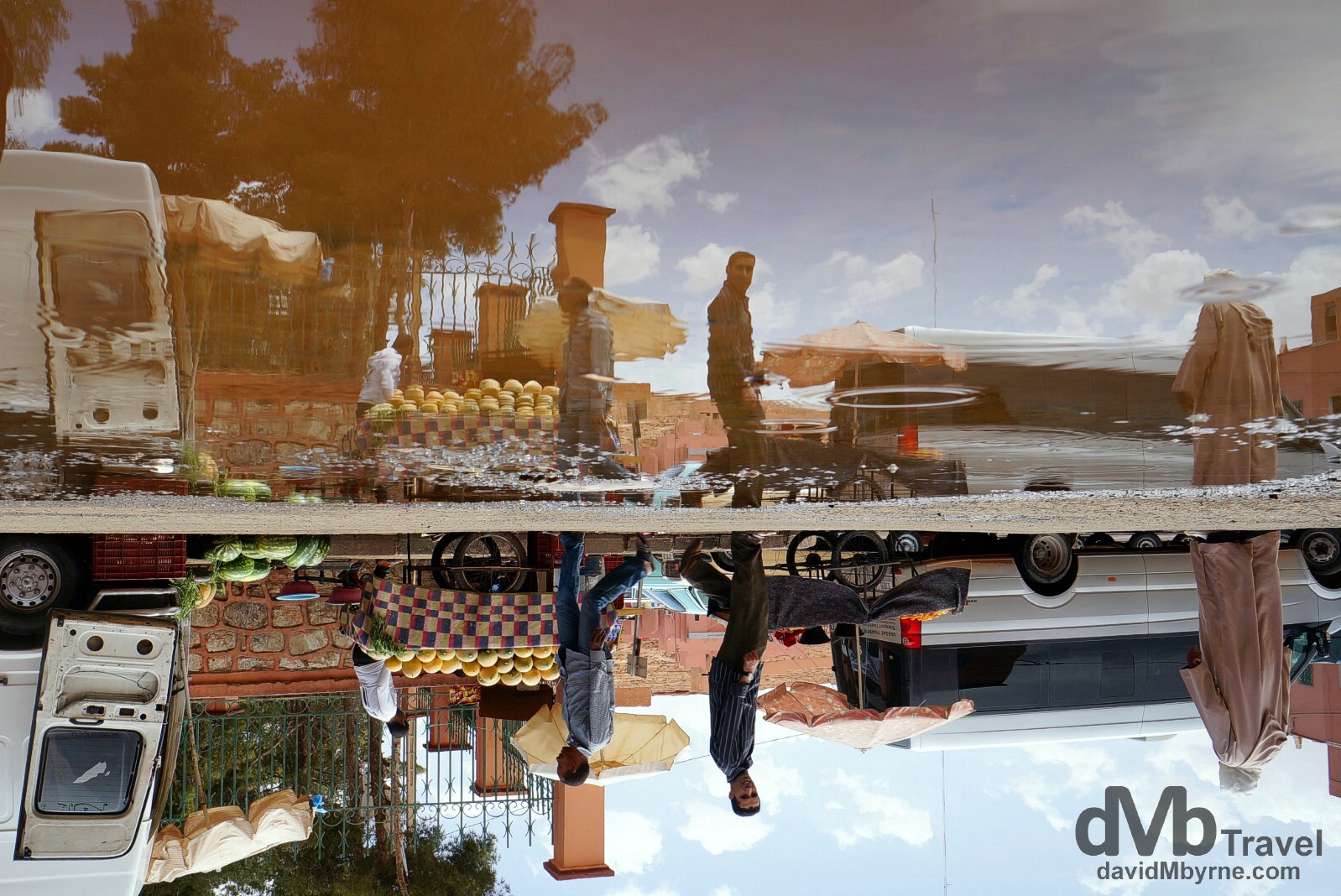 Reflections in the town of Tinerhir earlier today. I had to wait around the town this afternoon for a few hours for the government CTM bus to Er Rachidia. It rained while I was waiting and I got to playing with reflections once the rain had (almost) stopped. Tinerhir (

A Berber Wife?
Of late I’ve shared a lot of buses, taxis & café stools with locals, situations I would have loved to photograph but didn’t dare attempt to given the Moroccans obvious uneasiness with cameras– even taking out my iPod drew inquisitive & uneasy glances from the otherwise warm & friendly locals. While waiting around in a cafe today in Tinerhir I had a conversation with a local who introduced himself as ‘Crazy Berber’. He assured me he could get me a Berber wife before proceeding to give me a Berber name, one I’ve since forgotten. He was a good guy, around my age I’d guesstimate, but only hung around long enough to 1) drink the coffee I bought him, & 2) get the message that I really didn’t want a Berber wife or that I wasn’t going to bite on whatever tour/guesthouse/service he was invariably trying to peddle.

The rain really picked up en route from Tinerhir to Er Rachidia earlier today. We passed a few flooded bridges. Nothing major. However, the bridge entering Er Rachidia itself was impassable, as seen here. This is a picture of my bus driver and another passenger surveying the scene. We turned around, hit a few back roads and eventually made it to the town centre. Outside Er Rachidia (

Next Stop The Desert
I hope to leave Er Rachidia in the morning & I plan on doing so not by bus, minibus or taxi. I plan on hiring a car for a few days and making my way from here to the Sahara dunes in Merzouga, about 3 hours south of Er Rachidia. I went out this evening looking for car hire places. There’s a lawless, Wild West feel to the streets of Er Rachidia & upon initial investigation there doesn’t seem to be too many car hire places around which is definitely not the Moroccan norm, if there is such a thing. Here’s wondering what tomorrow brings. Desert I hope.