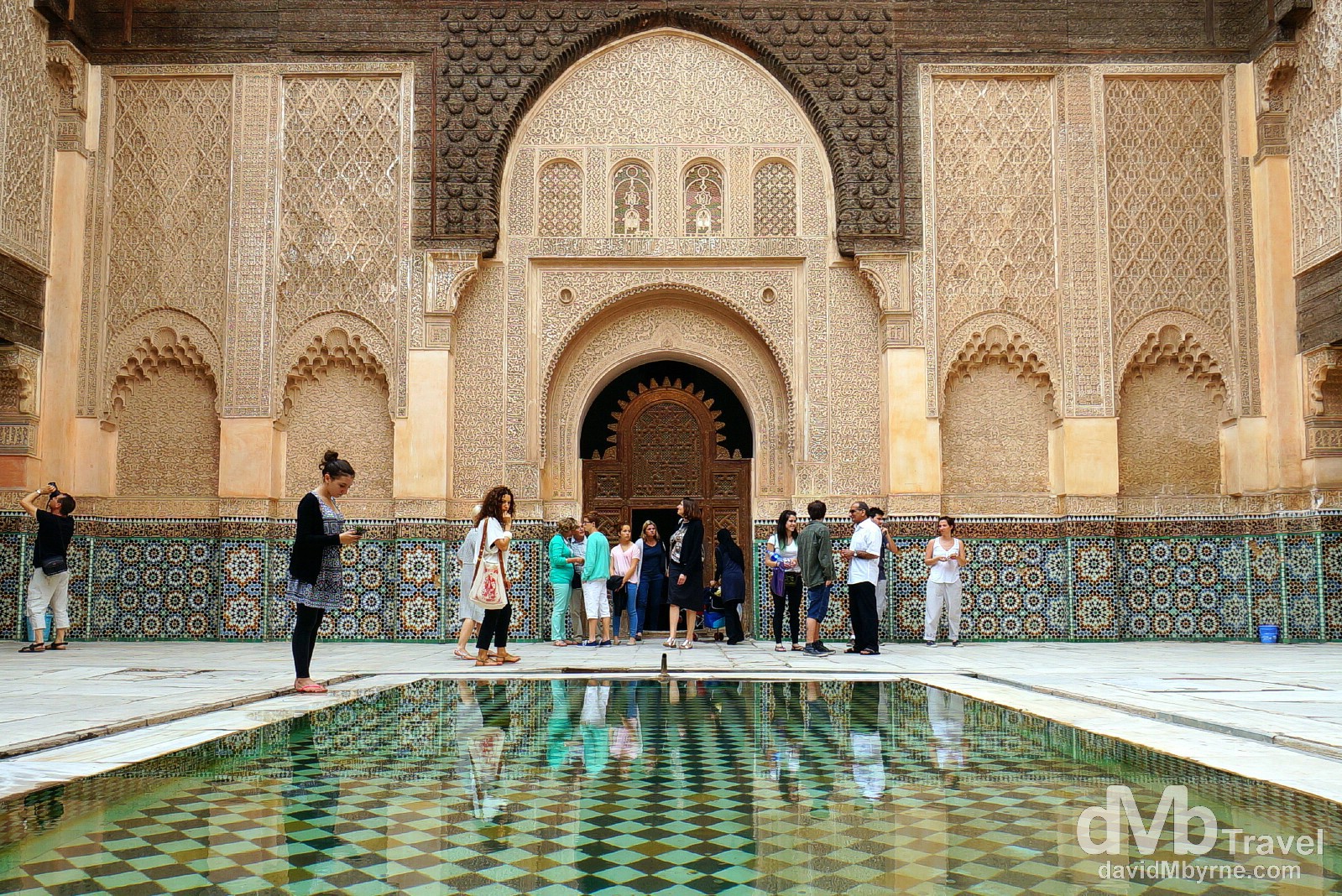 Marrakesh (you can spell it Marrakech either, as the Moroccans themselves do) has been interesting. Fun, exhausting, & a little bit frustrating, but always interesting. Truth be told there are no real stand-out, must-see sights in the city; it’s the city itself that’s the attraction & the show it puts on. Except it’s not a show – it’s real, real-life Marrakesh. It’s hard to explain this place so I’ll not try. I’ll leave it up to the pictures instead. 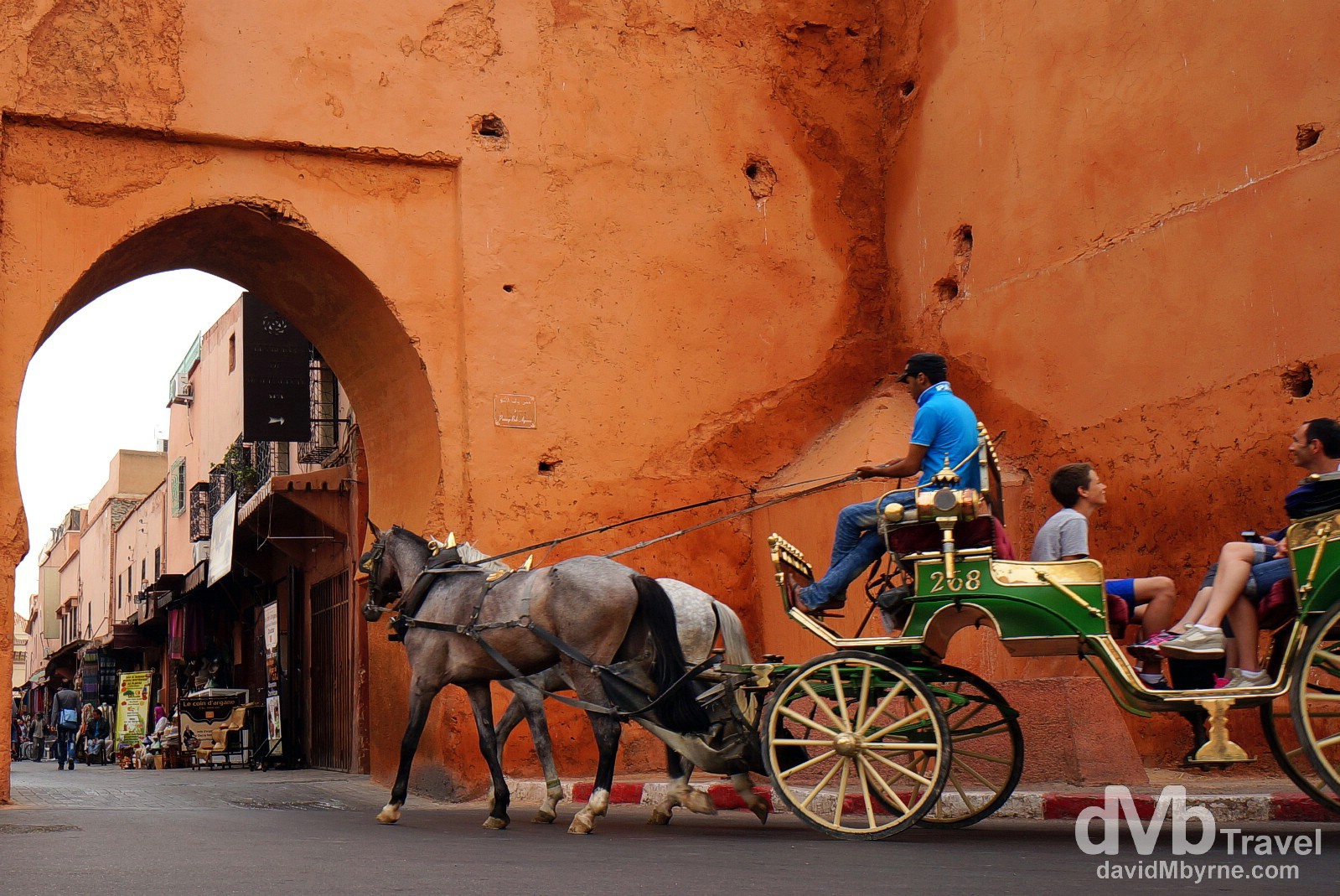 Entering the walls of the UNESCO-listed medina near the Bab Agnaou Gate. Marrakesh’s 16-kilometre medina encloses much of the old city & all areas of interest to tourists are within its massive, ochre walls. Marrakesh (

Founded in 1070–72 by the Almoravids, Marrakesh remained a political, economic and cultural centre for a long period. Its influence was felt throughout the western Muslim world, from North Africa to Andalusia. It has several impressive monuments dating from that period: the Koutoubiya Mosque, the Kasbah, the battlements, monumental doors, gardens, etc. Later architectural jewels include the Bandiâ Palace, the Ben Youssef Madrasa, the Saadian Tombs, several great residences and Place Jamaâ El Fna, a veritable open-air theatre.

– UNESCO commenting on Medina of Marrakesh

All roads in Marrakesh lead to the Djemma El-Fna (Place Jamaâ El Fna), the city’s main square. A scene of public executions in the past (Djemma el-Fna means ‘assembly of the dead’), today the square resembles a large car park, one that is alive most hours of the day with people, snake charmers, monkey handlers, henna tattoo artists, musicians, horse-drawn carriages, food & juice stalls, donkey carts, peddlers & general mayhem. At night acrobat artists join the mix, keeping alive a 1000-year-old tradition of street theatre. All of this has caught the attention of UNESCO. They call the square a ‘veritable open-air theatre’ & in 2001 declared it a ‘Masterpiece of World Heritage’, one that brings urban legends & Morocco’s oral history to life nightly. 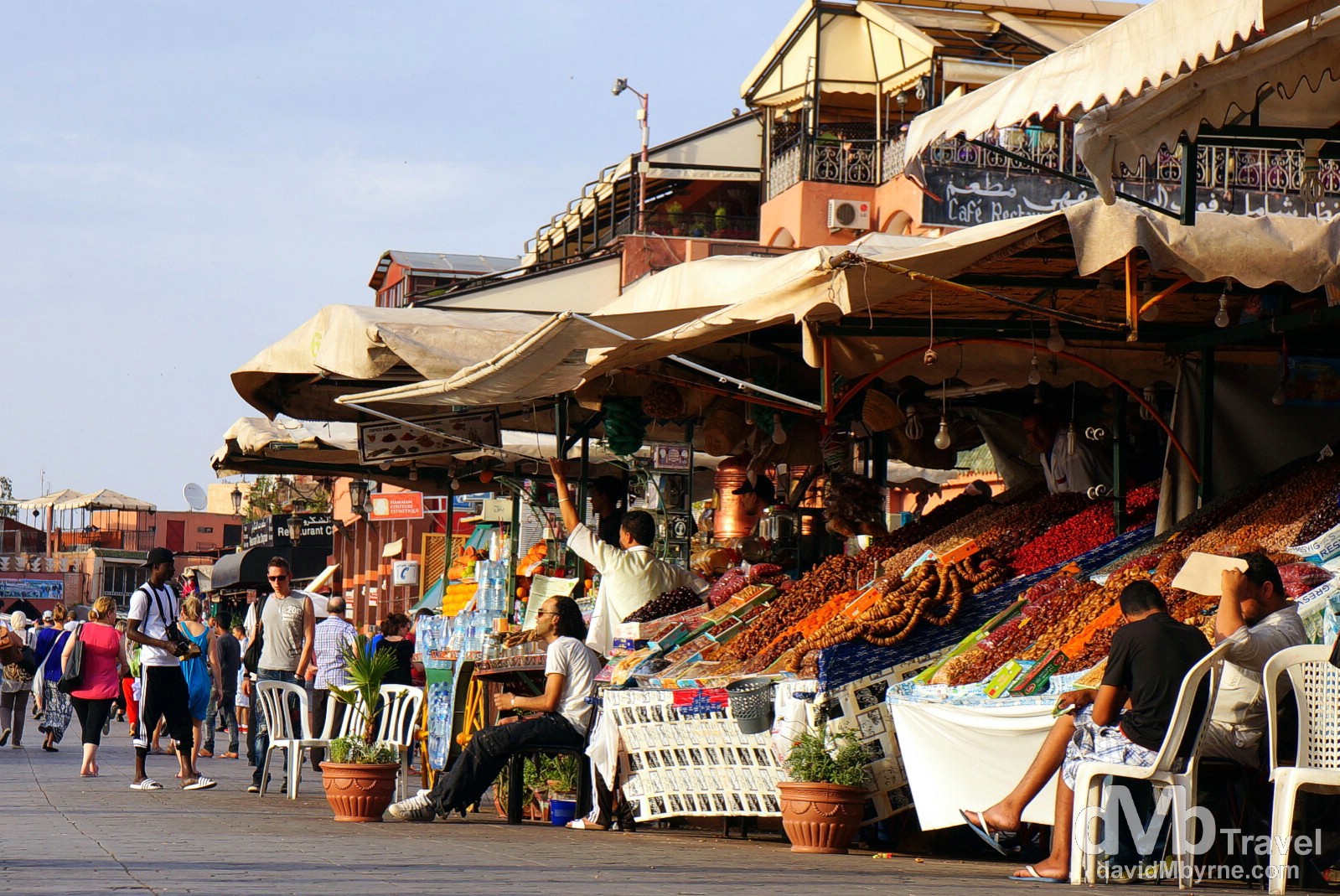 Stalls lining a portion of Djemma El-Fna in Marrakesh, Morocco. May 5th, 2014

The cultural space of Djamma El-Fna square has been proclaimed masterpiece xxxxxxx intangible heritage of humanity by UNESCO. The Jamaa El-Fna square is situated in the heart of the medina. This cultural and artistic crossroads is used not only as a meeting place for local people, but also for story tellers, acrobats, musicians, dancers, snake charmers, traditional healers and fortune-tellers. It is also a place for trading & entertainment. The square is a model for urban planning giving priority to people, culture, encounter & exchange. This plaque commemorates the universal recognition of the exceptional richness of the square and the symbolism it represents. 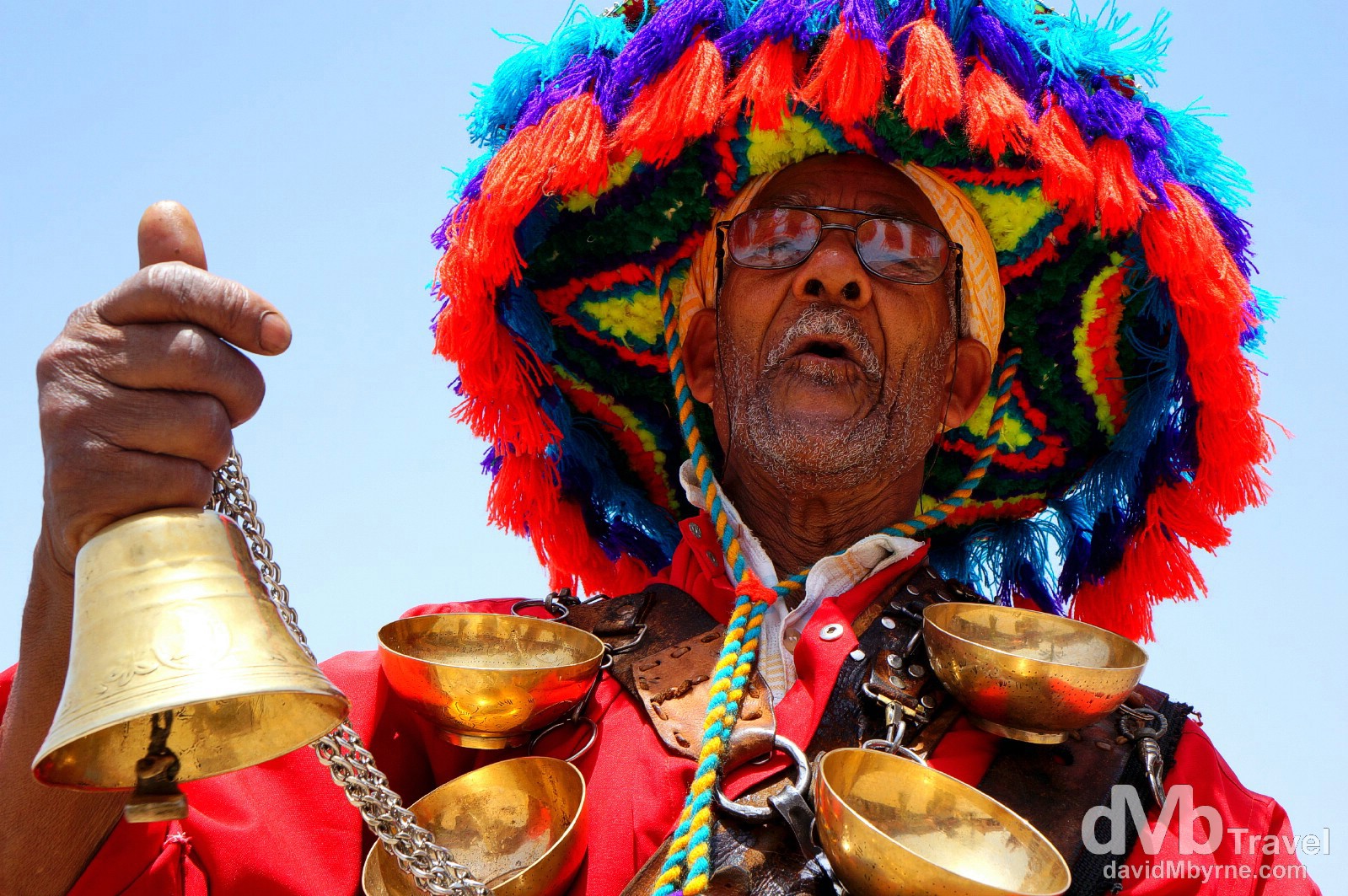 As chaotic & photogenic as the activity in Djemma El-Fna can be, getting (good) pictures is a challenge, one I was happy not to rise to. Tourists are forever hassled for money, no more so than when a camera is produced. I’d have been happy to pay for photographing a dazed cobra, a nappy-wearing leashed monkey jumping on the spot, a team of acrobats somersaulting this way & that, or a drum-beating ‘musician’ adding to the noise pollution, were any of the subjects photogenic. The problem was they weren’t/aren’t. However, this guy, one of the square’s many water sellers, was photogenic. And all this picture cost me was 10 dirhams (€0.90), except I gave him 20 (cos he was awesome & I’m nice). Djemma El-Fna, Marrakesh, Morocco. May 8th, 2014

A square… really no more than an open space in the centre of the city, but the stage for a long-established ritual in which shifting circles of onlookers gather round groups of acrobats, drummers, pipe musicians, dancers, storytellers, comedians and fairground acts. However many times you return there, it remains compelling. 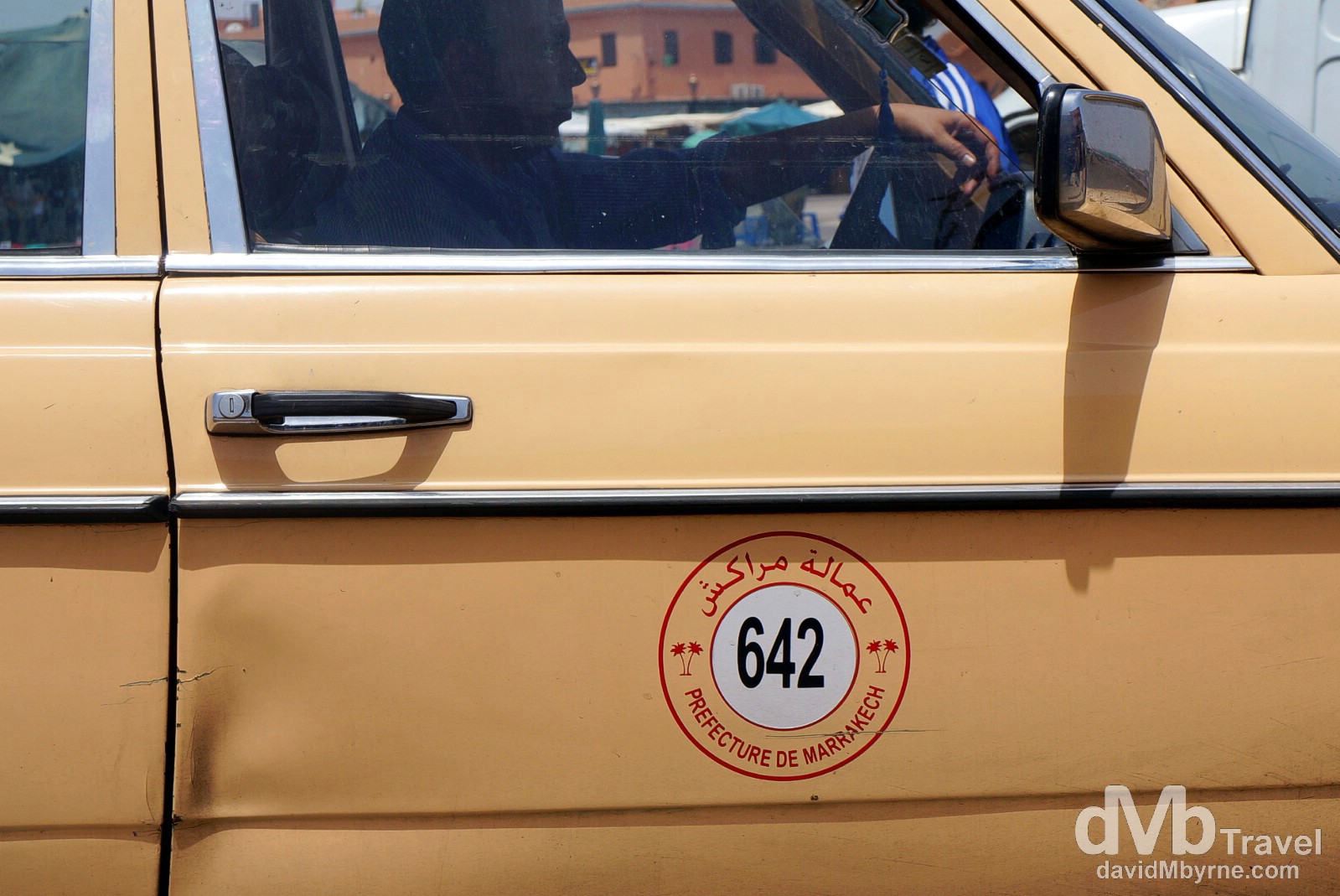 Marrakesh is the most important of Morocco’s four former imperial cities, the others being Fes, Meknes & the present-day capital, Rabat. Founded in 1071, most of present-day Marrakesh looks and feels every bit as old as it is, especially when one gets lost in one of the numerous city souqs. 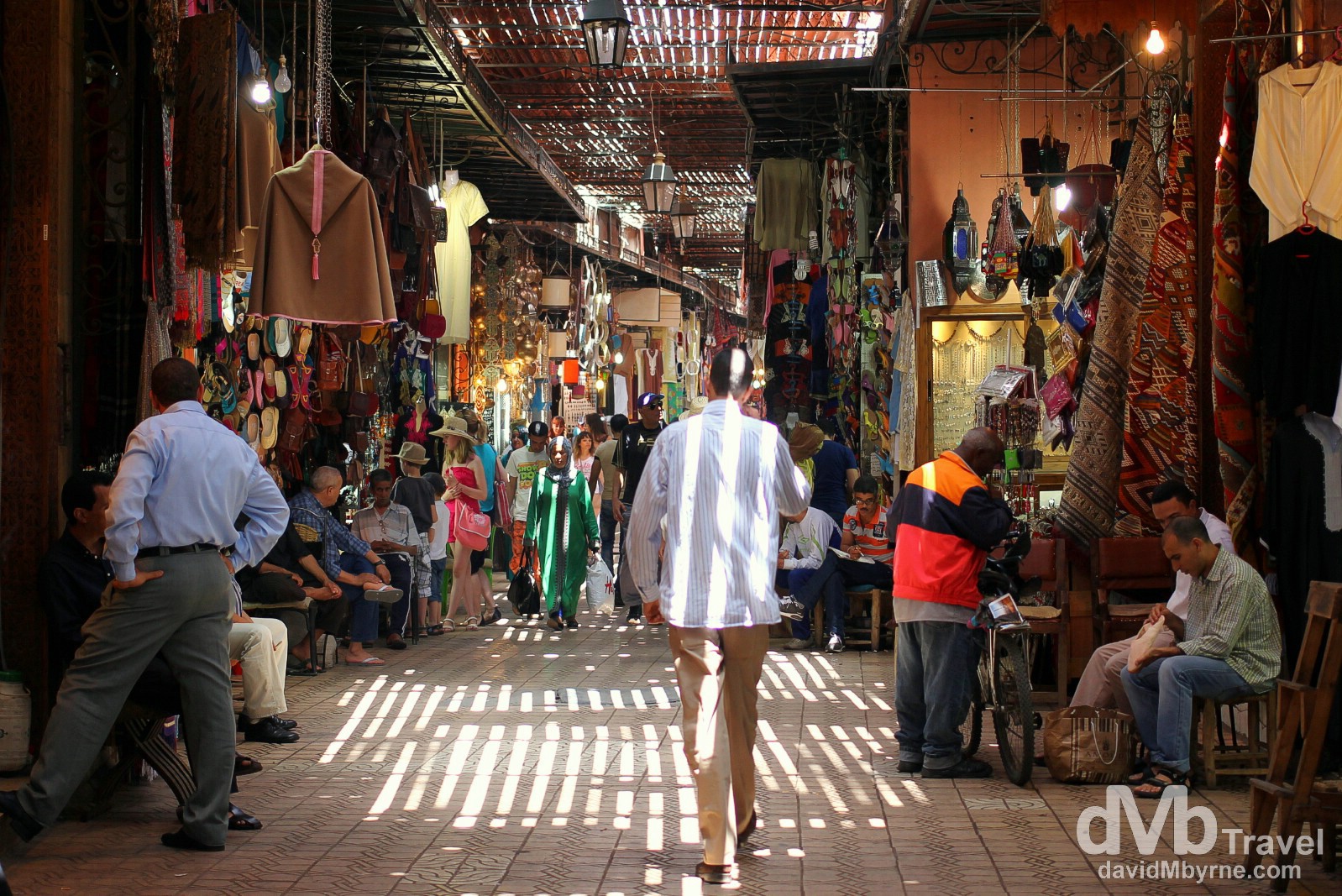 In one of the countless labyrinth souqs (covered markets) in Marrakesh. The city seems to be one big – BIG – maze of labyrinthine alleyways making & selling all manner of crafts, spices, nicknacks… anything really. The number of narrow, smoky, noisy, hot, sweaty, packed, disorientating, crumbling alleyways is quite mind-blowing. Getting lost in them is a given and again taking pictures is, for the most part, frowned upon – (Moroccans don’t like having their picture taken. I took a few pictures during my souq rambles, none that I really liked. Morocco. May 8th, 2014 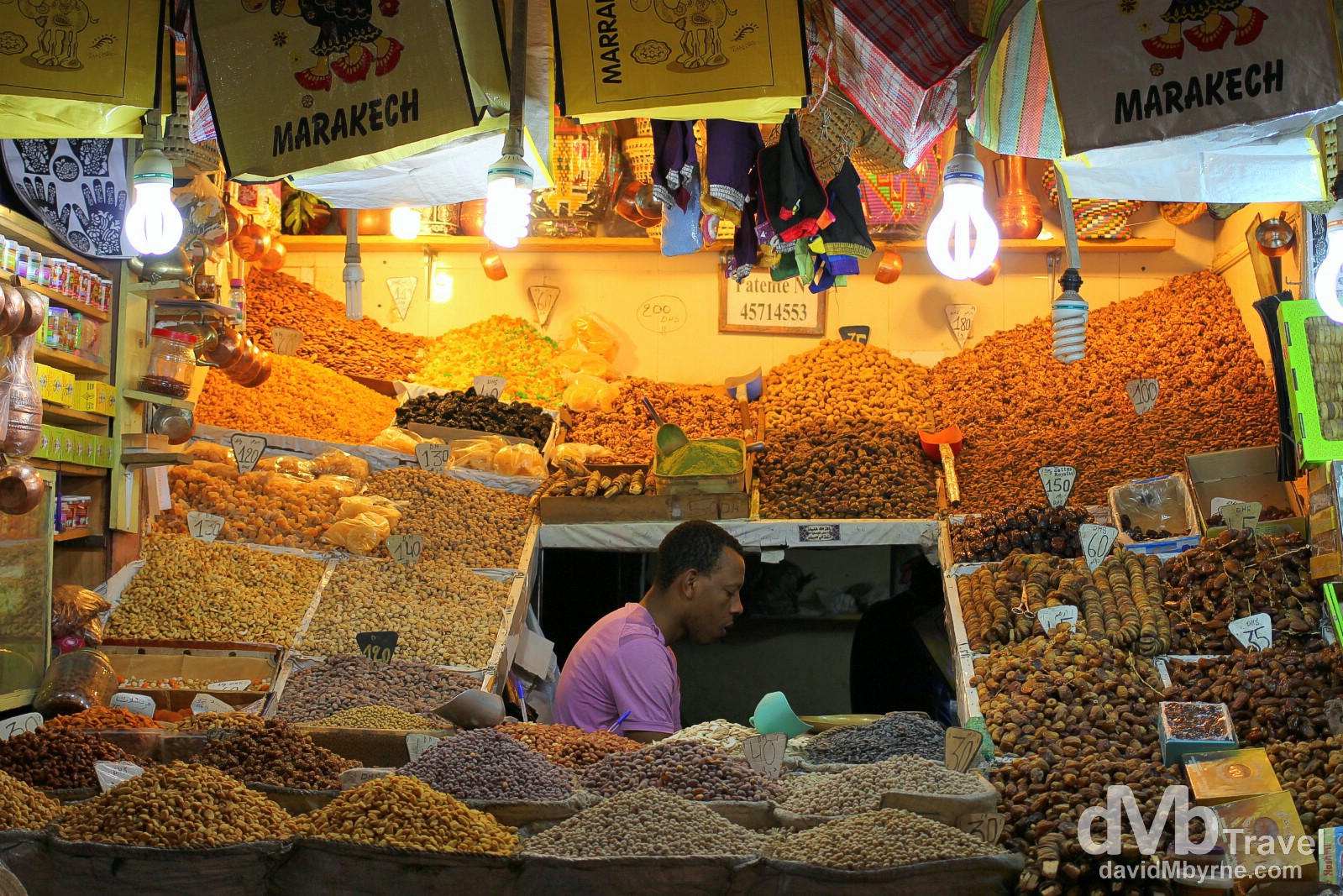 Marrakesh isn’t all about the Djemma El-Fna or souqs, although chances are that you have to walk through one or the other (or both) to get to any of the city’s other noteworthy sights. 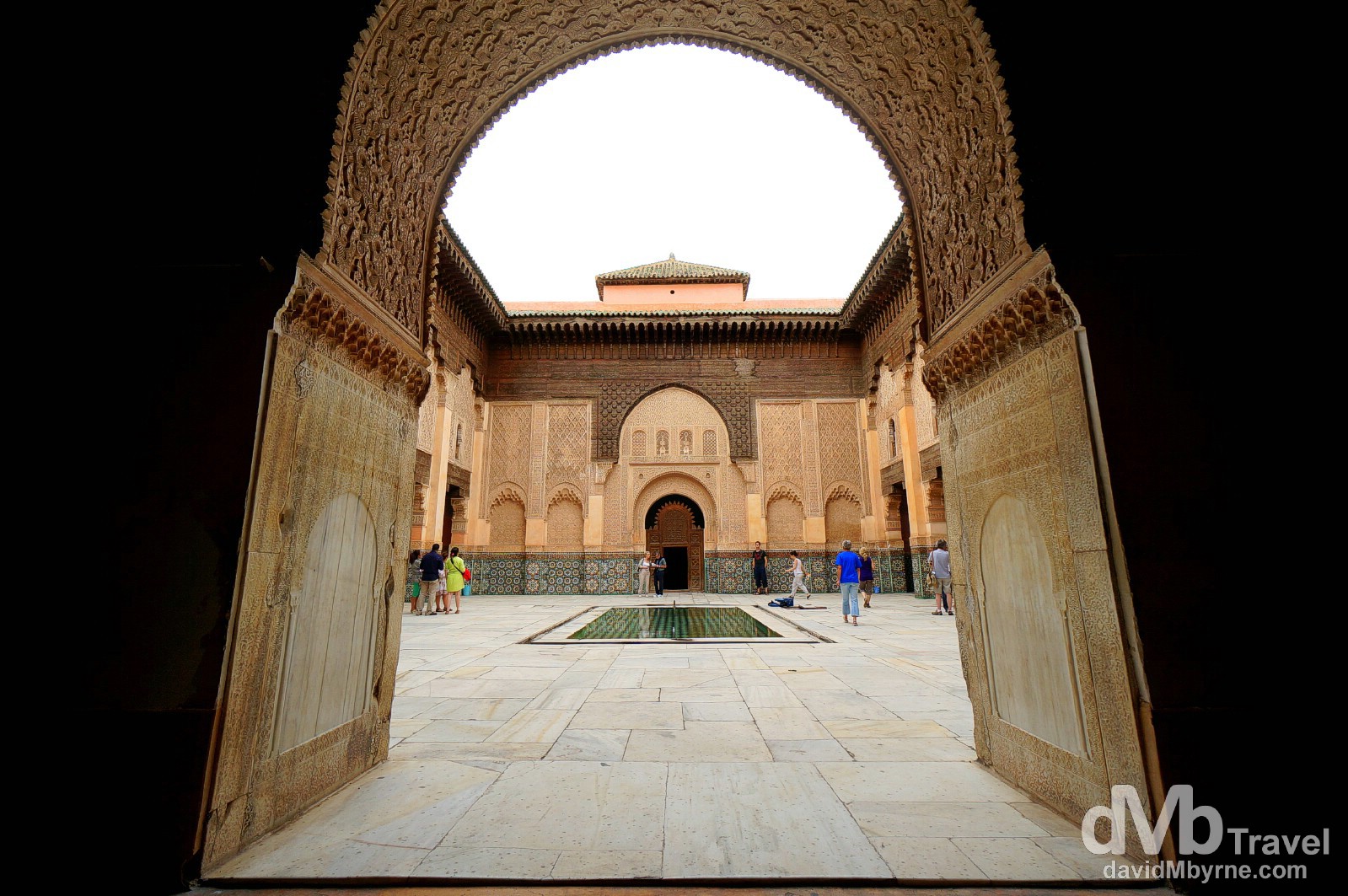 The 14th-century Ali ben Youssef Medersa, Medersa being an Arabic word for any type of educational institution. This place used to be the largest Quranic learning centre in Northern Africa. Today it has been taken over by tourists who, like me, gravitate to the central courtyard which, as well has having a nice albeit small reflecting pool, is surrounded by ‘Hispano-Moresque wonders of five-colour, high-lustre zellij (mosaic) and ingenious Iraqi-style Kufic stucco, with letters intertwined in leaves and knots’ (and I’ll thank Lonely Planet for that bit of hyperbole). Ali ben Youssef Medersa, Marrakesh, Morocco. May 6th, 2014 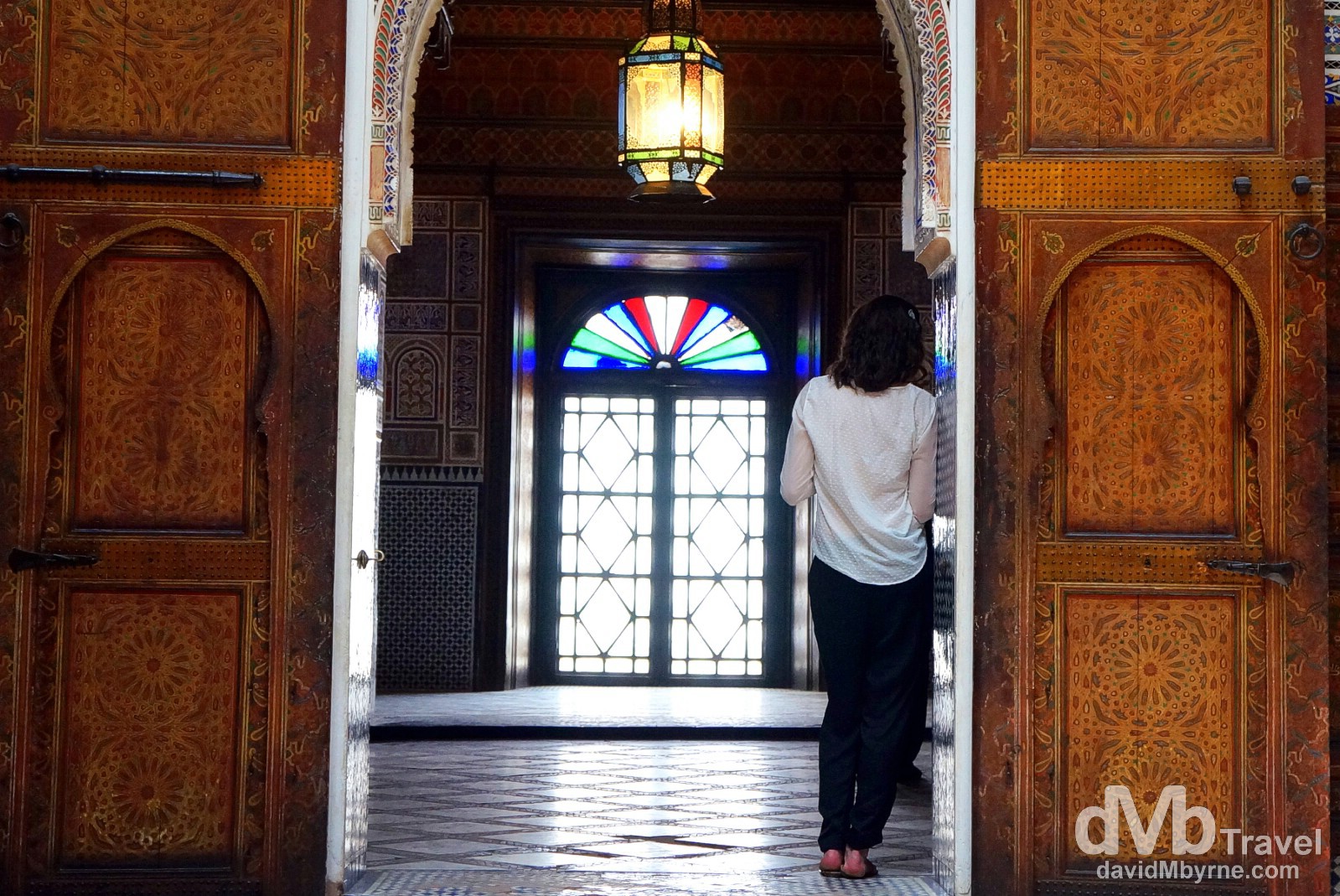 In the Dar Si Said, a monument to Moroccan master artisans and the home of the hum-ho Museum of Moroccan Arts – it didn’t do a whole lot for me & thus I didn’t hang around for too long in here. Marrakesh, Morocco. May 7th, 2014 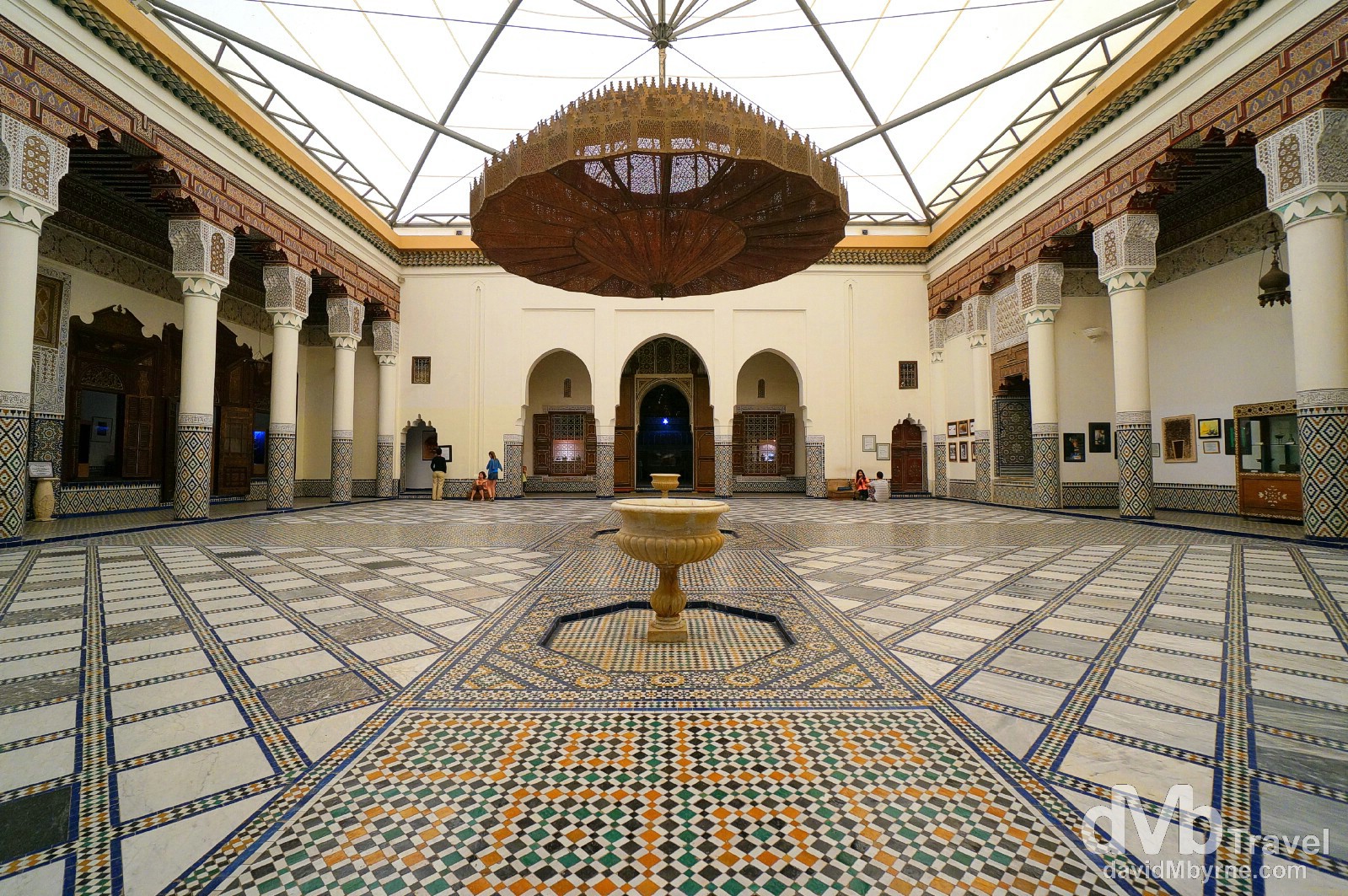 The arcaded inner courtyard of Mnebhi Palace, a former ministerial palace & girls school prior to a late-1990s restoration. Now it is home to the Musee de Marrakech (Museum of Marrakesh). I didn’t spend too long in this museum either with the bulk of the time I did devote to the museum spent spent photographing its spacious, airy, zellij-heavy inner courtyard, one of the best places in the whole city of Marrakesh to bring a wide-angle lens. Musee de Marrakech/Mnebhi Palace, Marrakesh, Morocco. May 6th, 2014 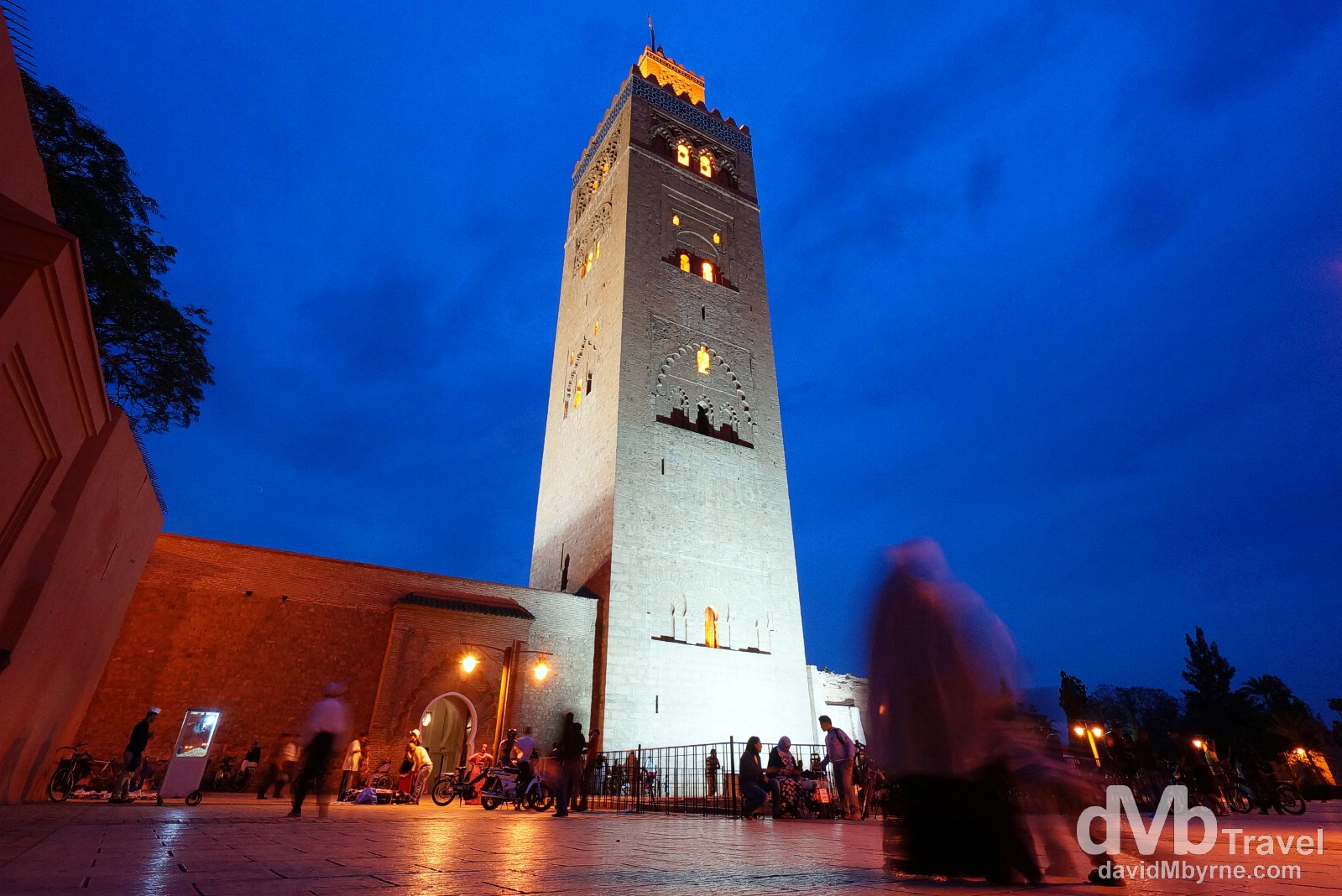 Outside the Koutoubia Mosque shortly after dusk. The 70-metre high, 12th-century minaret of the city’s Koutoubia Mosque is probably Marrakesh’s most prominent landmark. It was originally covered in pinkish plaster but a decision was made during a 1990s restoration to preserve its exposed stone. The mosque, & like all mosques in Morocco except for the 120-dihrams-to-enter Hassan II mosque in Casablanca, is closed to non-Muslims. Marrakesh, Morocco. May 6th, 2014 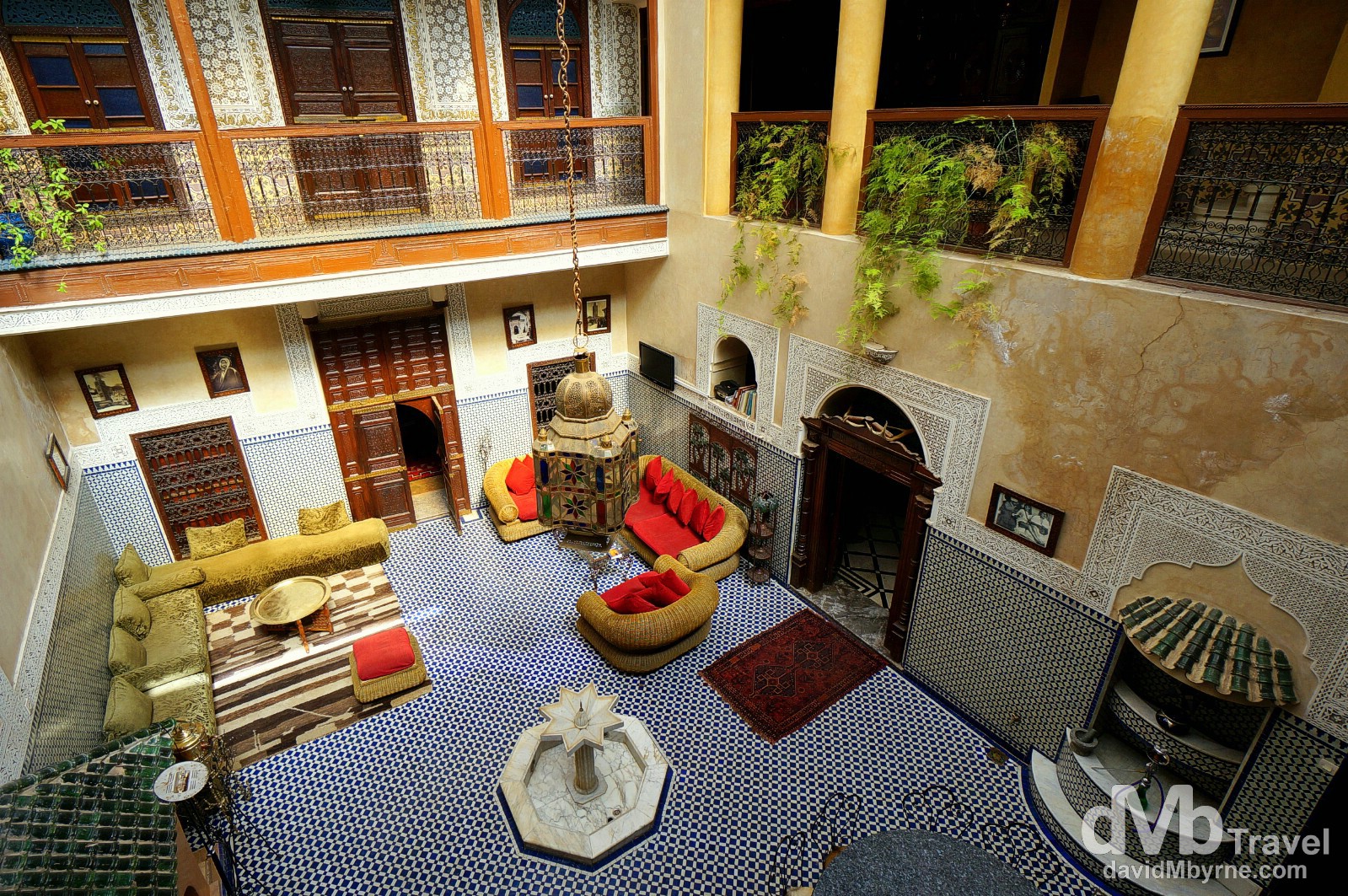 Oh man. The heat is on in #Marrakech Longing for the cooler Atlantic Coast. #travel #dmbtravel #morocco pic.twitter.com/ogqXYRT5pW

– Bilbo Baggins, The Fellowship of the Ring

It has been hot here in Marrakesh. It hasn’t been as stifling as the Arabian Peninsula mind you but I’ve still found myself longing for cooler climes, like those on the breezy Moroccan Atlantic Coast from whence I came. So tomorrow I’m heading for the hills, the Atlas Mountains to be precise, the 2,500 kilometre mountain range that stretches across the region through parts of Algeria, Morocco & Tunisia. I plan on basing myself for the next few days, maybe longer, in the small village of Imlil, about 50 kilometres/2-3 hours south of Marrakesh. I suspect it’ll be chilly there given its 1,740-metre elevation – the clean air and vistas should be nice too. From there I’ll plan, among other things, an assault on snow-capped 4,167-metre Jebel Toubkal, the highest peak of the Atlas range. Indeed, it’s the highest point in North Africa. I can scarcely believe there are snow-capped peaks within two hours’ drive of here, but there are. Doubtless I’ll be connected up there but doubtless I’ll be complaining of the heat either.