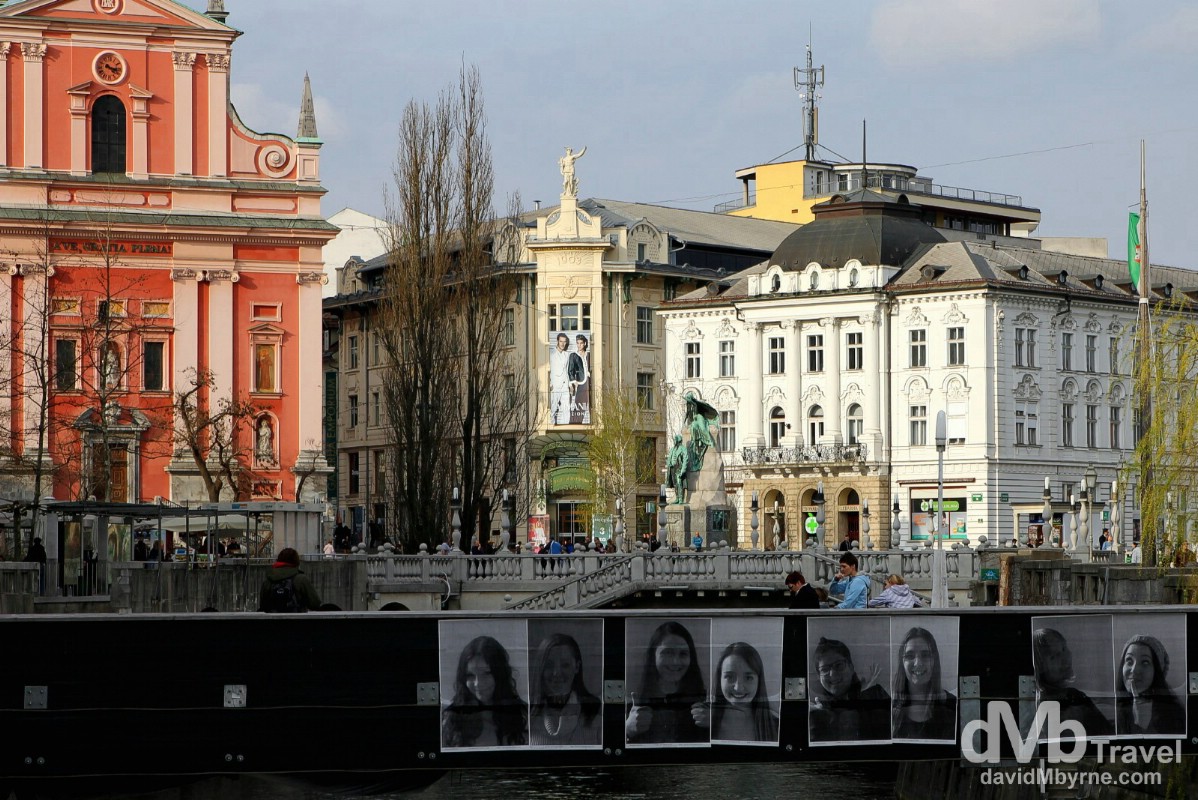 What a difference a day makes. I’m sure glad I saw what I saw of Pula on the Croatian Istria Peninsula yesterday when bathed in sunshine because it was a miserable day today in this little corner of Europe.

It was a short walk earlier today between connecting buses in the Croatian town of Rijeka but it was raining cats & dogs of the wolfhound & tiger variety, meaning I was still damp getting off the second bus of the day some 6 hours later in Ljubljana, Slovenia. And that after a 3-hour wait in a smoky café in Rijeka followed by 3 more hours on bus number two (to go all of 115 kilometers ffs), one that was oddly full of elderly women – I felt like I was going to bingo.

But at least I got to my desired destination of Ljubljana and what a pretty little city this is. It’s a quiet place, or at least it was this afternoon when I arrived – didn’t anyone tell the Ljubljians (I think that’s what you call them) that I was coming? I’ll get a proper look around tomorrow (& here’s hoping I get a good day for it) but what I’ve seen thus far means that Ljubljana, an ancient little city of squares, stunning buildings, & cafes (of course), is gonna be a treat to behold. My camera batteries are charging as I type. God I love Europe.

I’m glad I started early today because a day of trudging around Ljubljana was curtailed by incessant rain (gosh, the sun of the Istria Peninsula in Croatia that I basked seems a lot more than 48 hours ago). It was OK this morning. It was damp & overcast but OK, manageable, & thus I managed to stay one step ahead of the showers. But not so in the afternoon. I waited (for the rains to stop). And waited. And waited, at one stage finding myself trapped in McDonald’s in Ljubljana train station having just purchased a ticket out of here for early, stupid o’clock, in the morning. Eventually it got dark, it kept raining & I stop waiting. And that was that for Ljubljana. 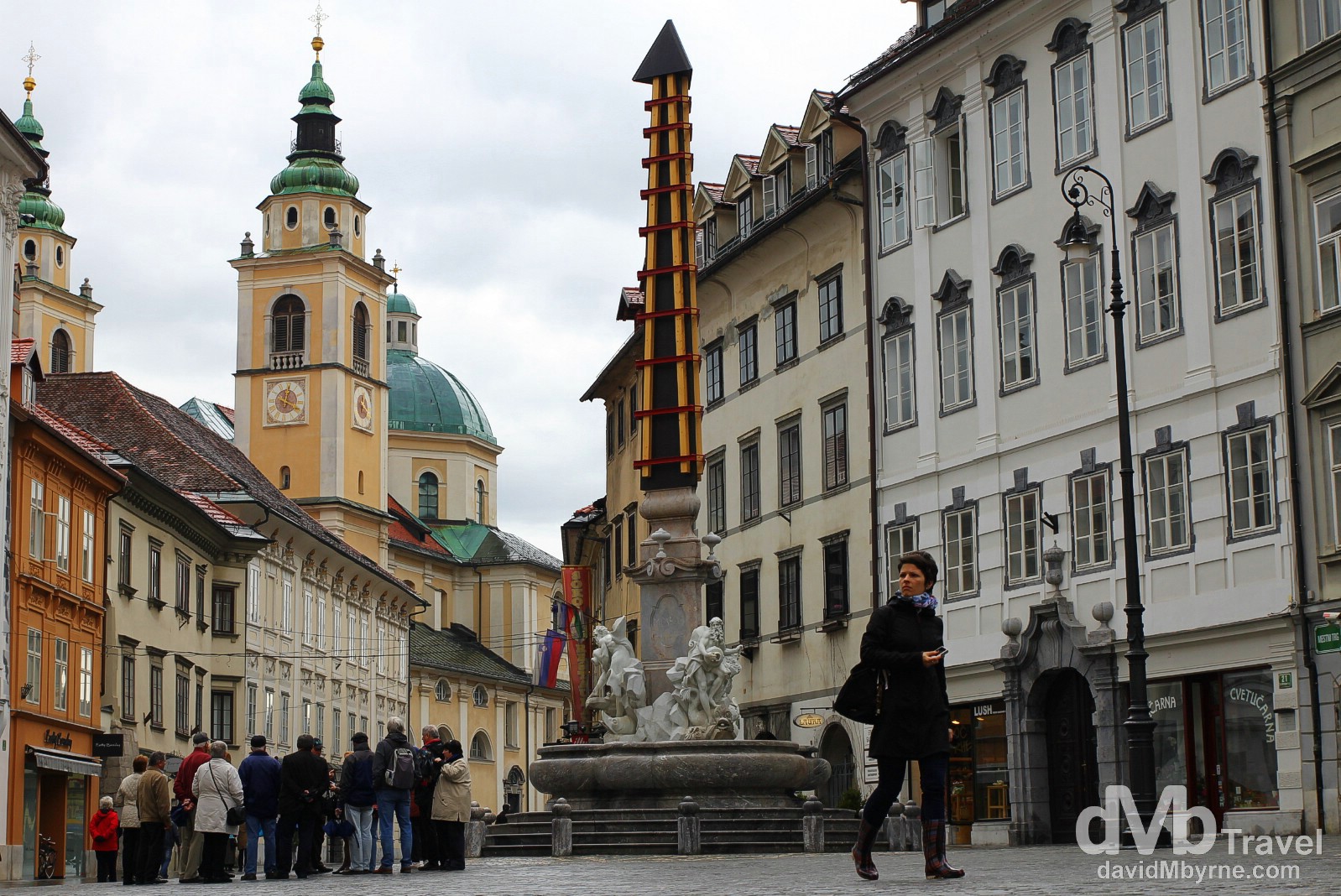 Ljubljana, said to have been founded by the Greek mythological hero Jason, he of Golden Fleece fame, is an ancient place – the Romans (yes, them again) had the first important settlement here way back in 50 BC. The city has gone through a few rebuilding phases, having been flattened not once but twice by earthquakes, first in 1511 & again in 1895. And while I doubt the residents of the day would agree, the quakes were the best thing to happen to present-day Ljubljana as most of the gorgeous historic buildings on show are a result of past rebuilding efforts. And what efforts. The city really is quite the smorgasbords of wonderful architecture – stunning Baroque stands beside Art Nouveau with a bit of Gothic here & there. This is a picture taken in Mestni trg (square) in the medieval Old Town, the oldest part of the city. The square (more like a wide road) is dominated by the Town Hall & the Fountain of Three Carniolan Rivers (seen here). In the distance is the Baroque twin-towered Cathedral of St Nicholas, the city’s largest church. Mestni trg in the medieval Old Town part of Ljubljana, Slovenia. March 23rd, 2014

@visitljubljana Ha, rain is not a problem. I like rain! pic.twitter.com/NwmO4DzjWR 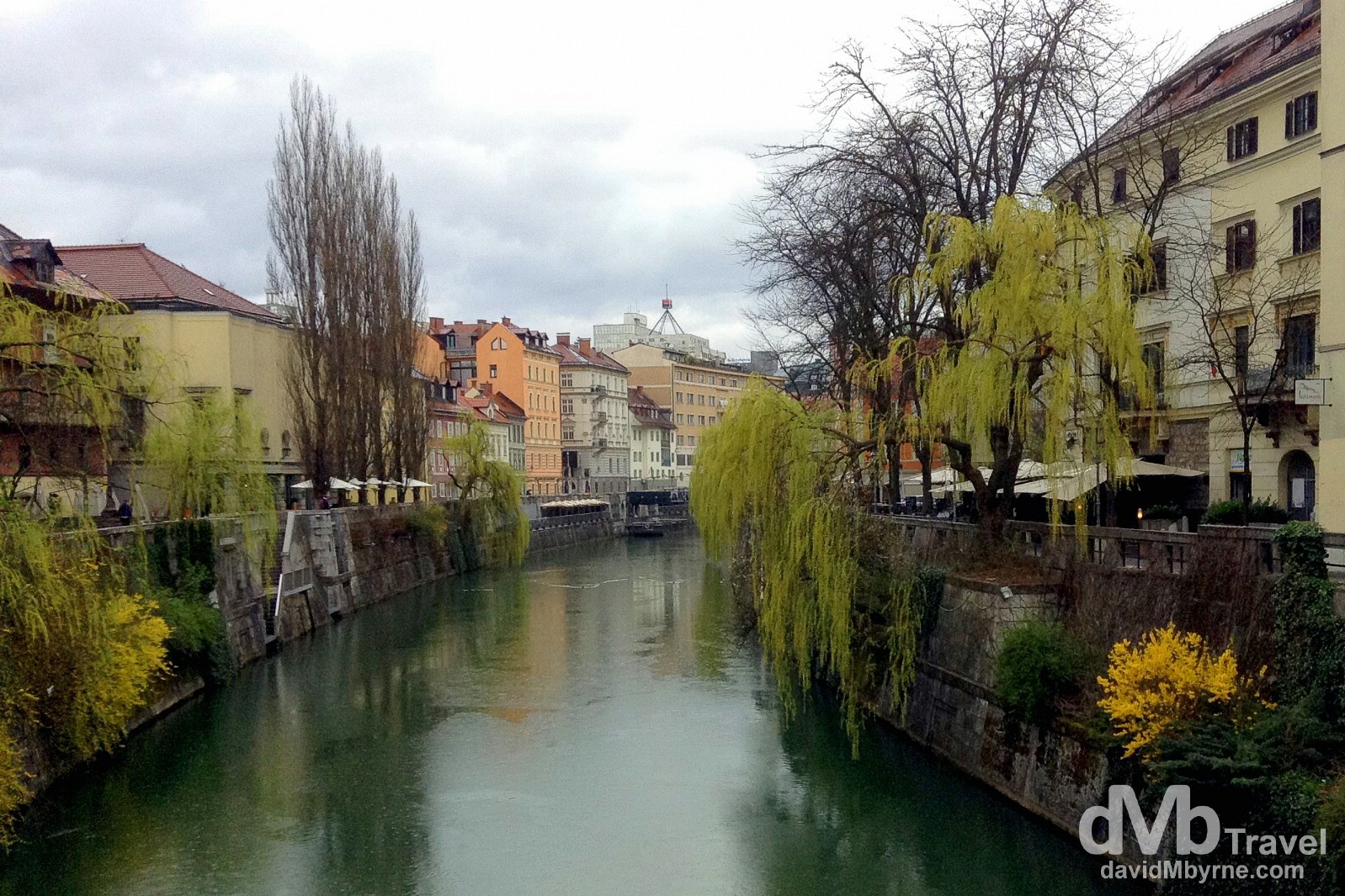 Ljubljana, a city of culture, cafes & squares, is an awfully pretty place, even when damp & shrouded in mist – it’s very fairy tale-esque. I can only imagine how it looks in summer (but I’ll find out eventually). By the Ljubljanica river in Ljubljana, Slovenia. March 23rd, 2014 (iPod)

Unfinished Business
I normally, & purposely, leave at least one item on the to-do list for each location I visit as, you know, an incentive for getting back. But the rains of today made sure that I’d have a to-do list for a return to Ljubljana. That said, even had I have seen all I wanted to see today I know I’d still be edging to get back. Ljubljana, a city I’d barely heard of a few days ago and a city I couldn’t even pronounce correctly 24 hours ago (but still can’t spell correctly without assistance), is a little European gem. Of that make no mistake.