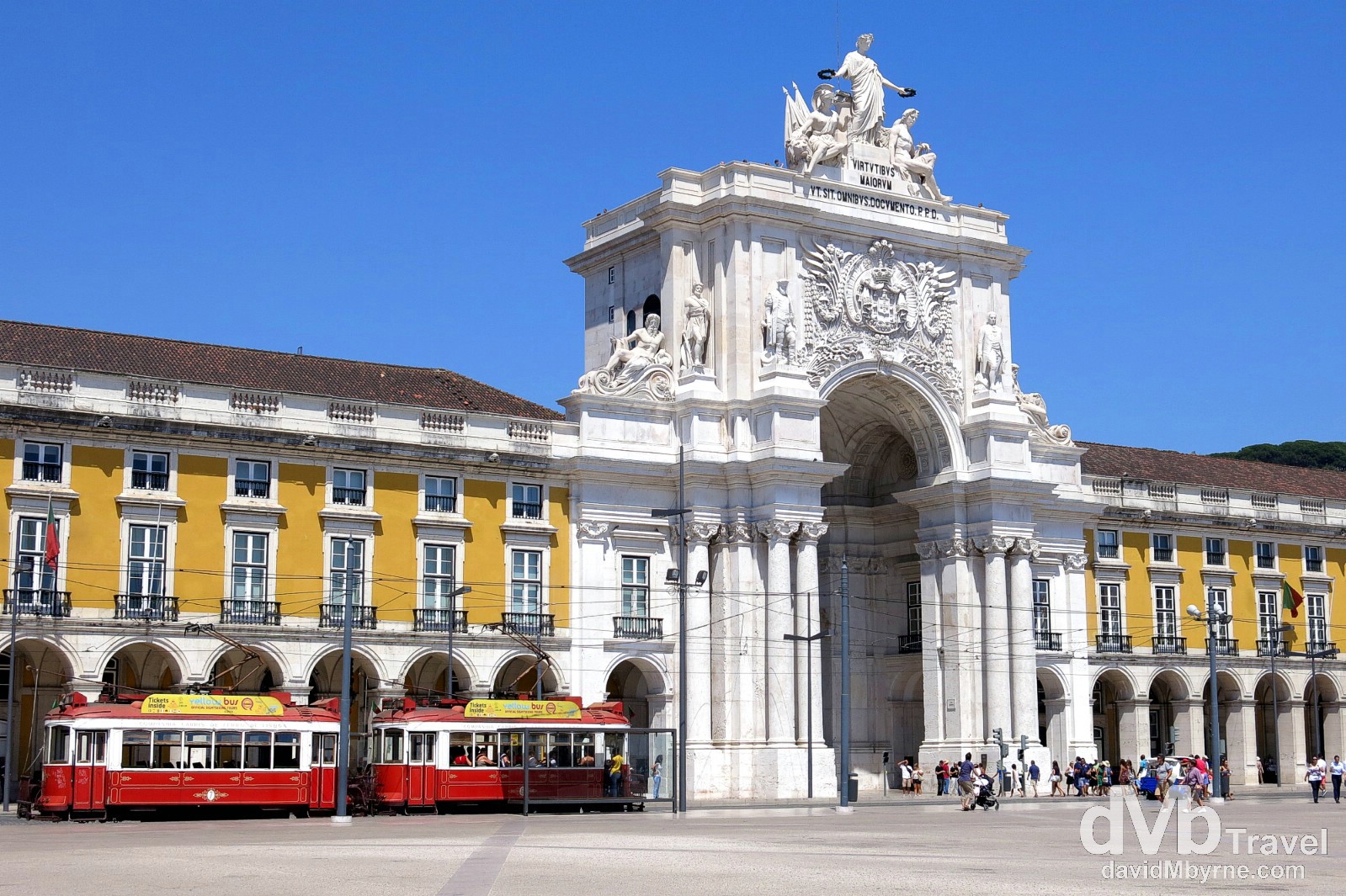 Lisbon, the Portuguese capital, has been generating a buzz on the travel scene for a while now, quickly becoming one of Europe’s most popular capitals. I’d heard good things about it but really didn’t know all that much about the city. I do now. Small enough to explore in a day but with enough to keep you busy for a lot longer, Europe’s westernmost capital, and the only one on the Atlantic, Lisbon boasts 3,000 years of history, awesome architecture, a great climate, a laid-back café-culture vibe, & good-value, high quality dining & accommodation options. All in all quite the package. Three nights I spent here & I love every (photogenic) minute of it. Well, most of it.

I arrived in the city from Ericeira in the early evening & embarked on a no-particular-destination-in-mind meander around the City Centre to get my bearings & scout photographic subjects ahead of the following few days’ assault on the city. I had no intentions of bringing my SLR with me & I debated whether to take a camera at all, eventually reaching for my point-and-shoot to keep me company. I used it to capture the following two images in the Bairro Alto district of the city, a popular nightlife district of narrow cobbled lanes. It was a balmy summer Sunday evening and the place was buzzing. 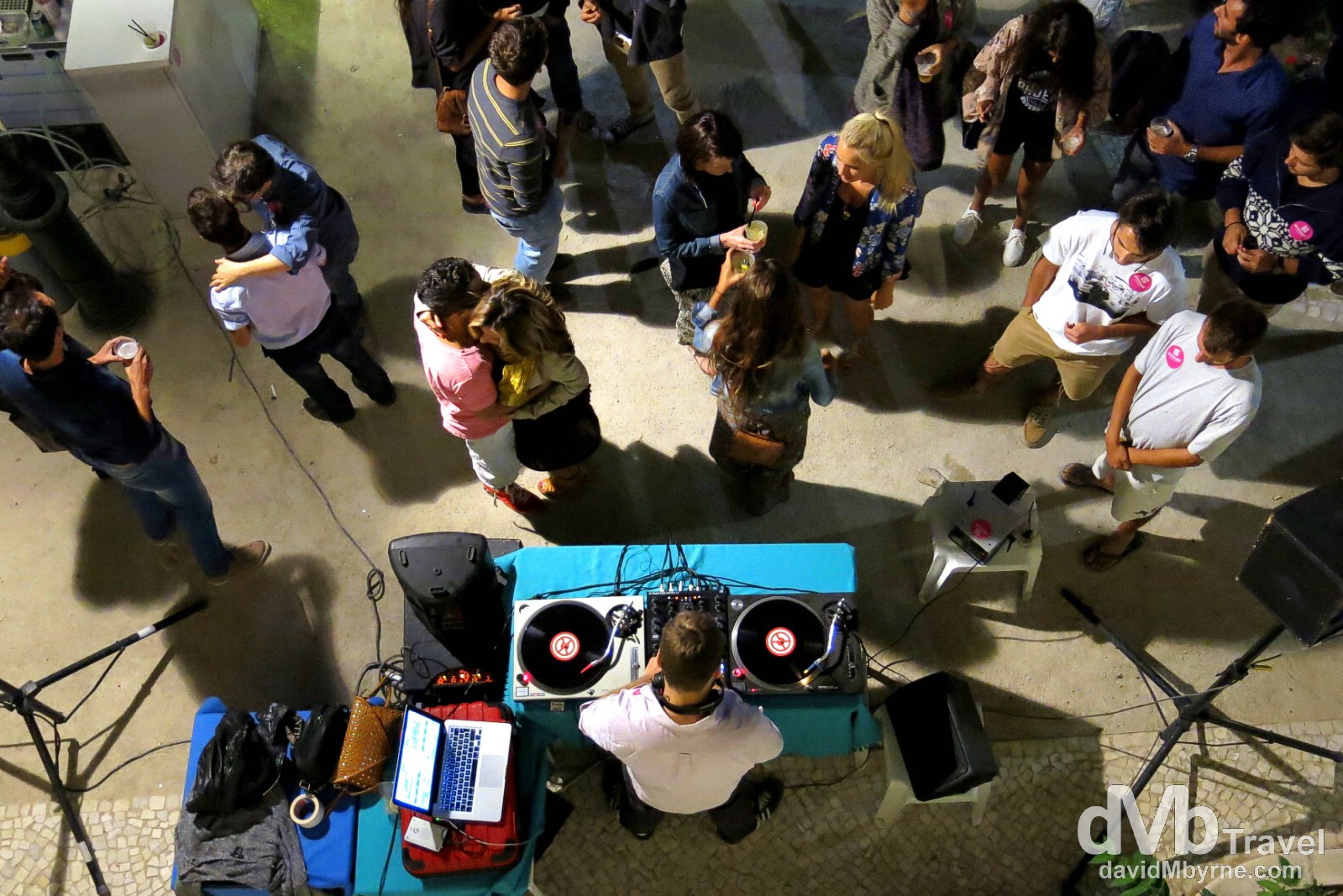 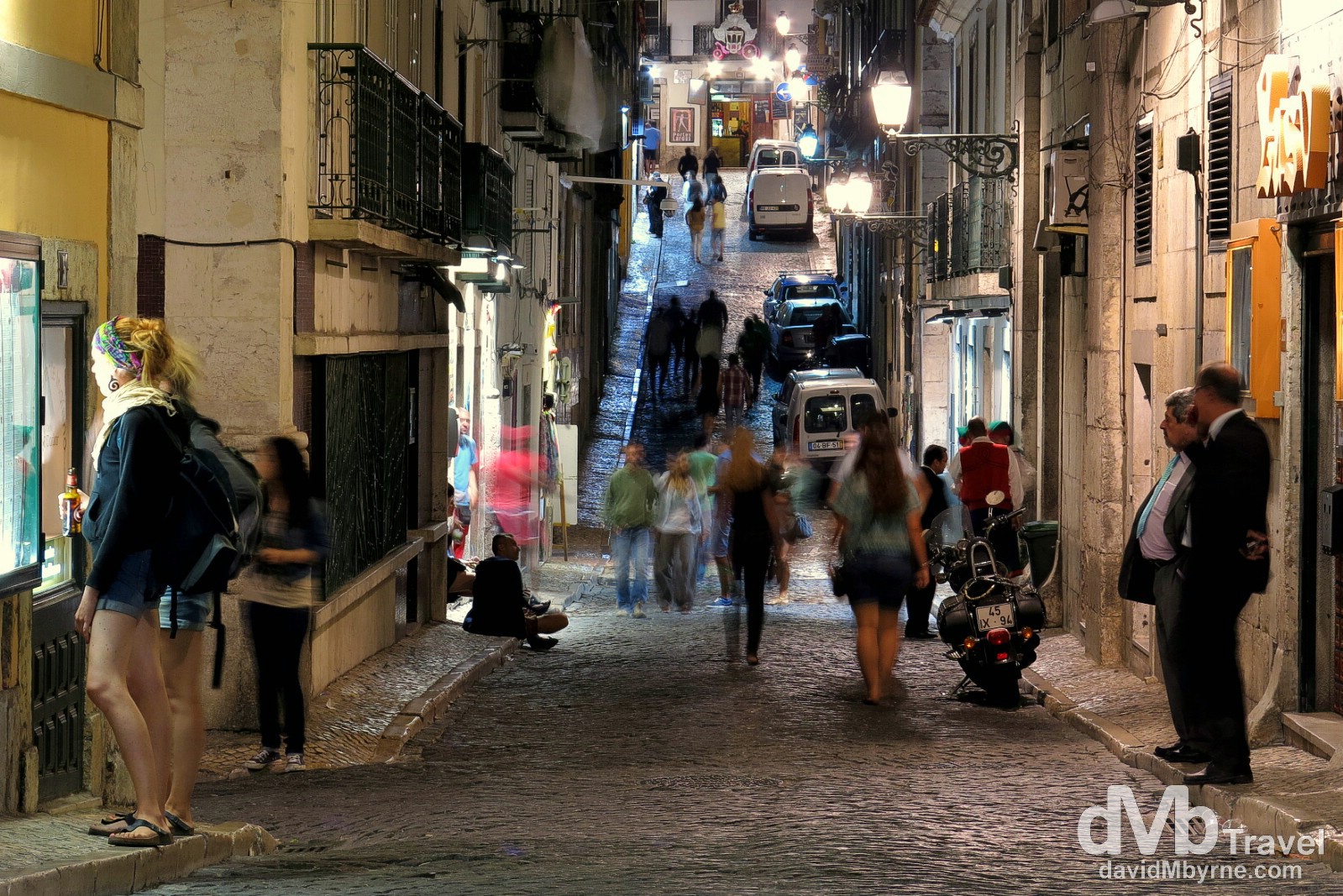 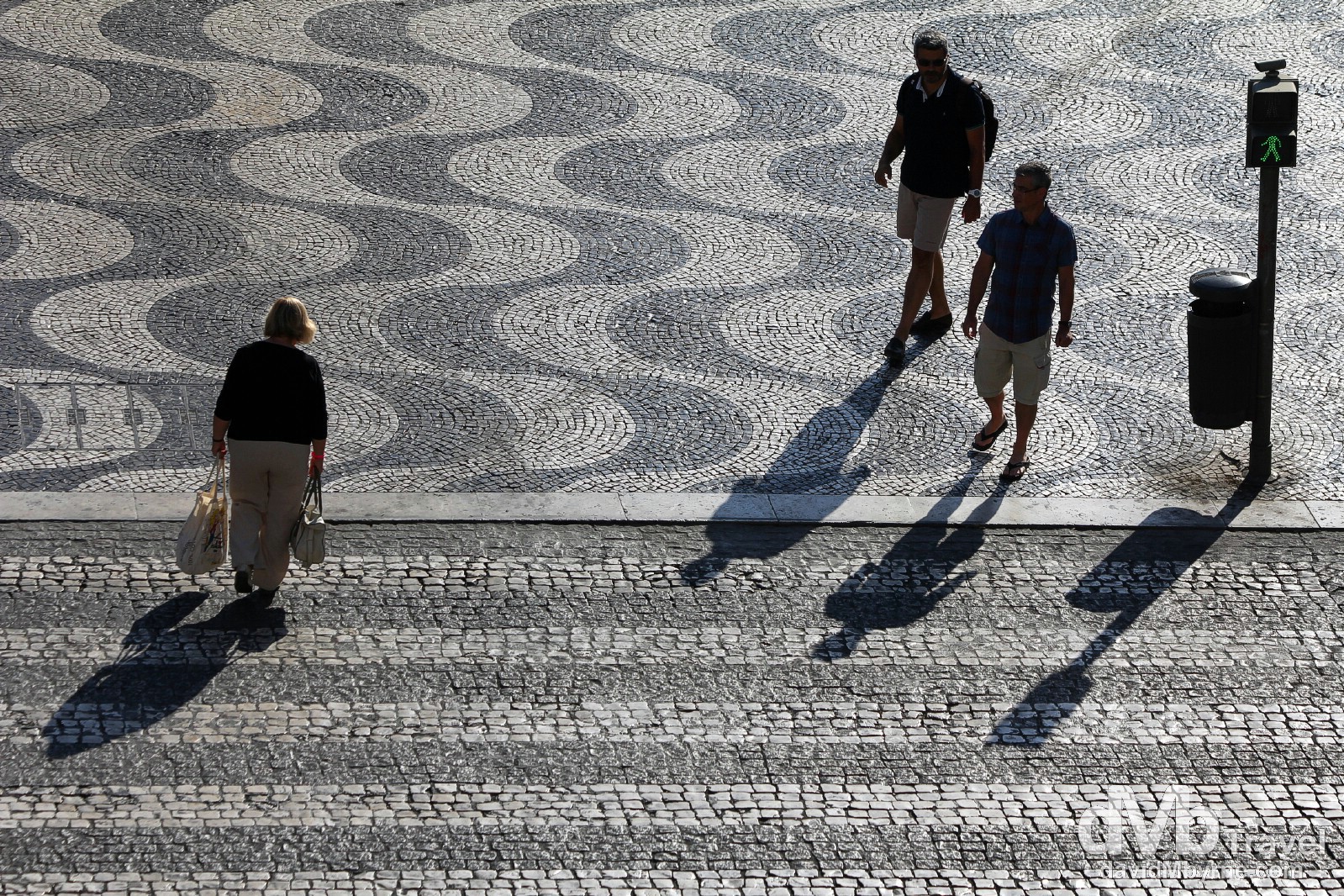 Early morning shadows crossing Praça de D. Pedro IV (Rossio Square). This image set the tone for my time in Lisbon. Before I’d even left my hostel on the morning of my first full day of sightseeing I was taking pictures. It was early & the square was still quiet, eerily so – granted this was a Sunday but even so, the Portuguese don’t seem to be early risers, even here in the capital. This picture was captured hanging out the third floor window of my hostel which overlooked the square, one of Lisbon’s main squares since the Middle Ages, being a setting of popular revolts and celebrations, bullfights and executions. These days’ things are a tad more sedate & the square is a preferred meeting place for Lisbon natives and tourists alike. Praça de D. Pedro IV (Rossio Square), Lisbon, Portugal. August 25th 2013.

Location, location, location – where land meets sea & Europe meets Africa. The ancient Phoenicians recognised the great advantages of the location of Lisbon & all the great civilisations that followed – including the Romans & the Moors – expanded the city beyond its legendary Seven Hills. The untold riches of empire have left a legacy of incredible monuments and culture, a legacy that was almost destroyed in the Great Earthquake of 1755 which sent philosophical shock waves through Europe & changed the face of Lisbon forever.

This is the Rua Augusta Arch, one of the cities grandest monuments. A stone triumphal arch-like monument at the end of Rua Augusta & overlooking Commerce Square, Lisbon’s best-known square & once home to the royal palace, the arch was built to commemorate the city’s reconstruction after the devastation of the 1755 earthquake, a quake that levelled much of the city. The monumental arch has six columns, some of which are 11 metres high, and is adorned with massive statues of various historical figures. It’s quite the sight especially when set against a blue sky, something Lisbon is blessed with an abundance of. Lisbon, Portugal. August 25th 2013. 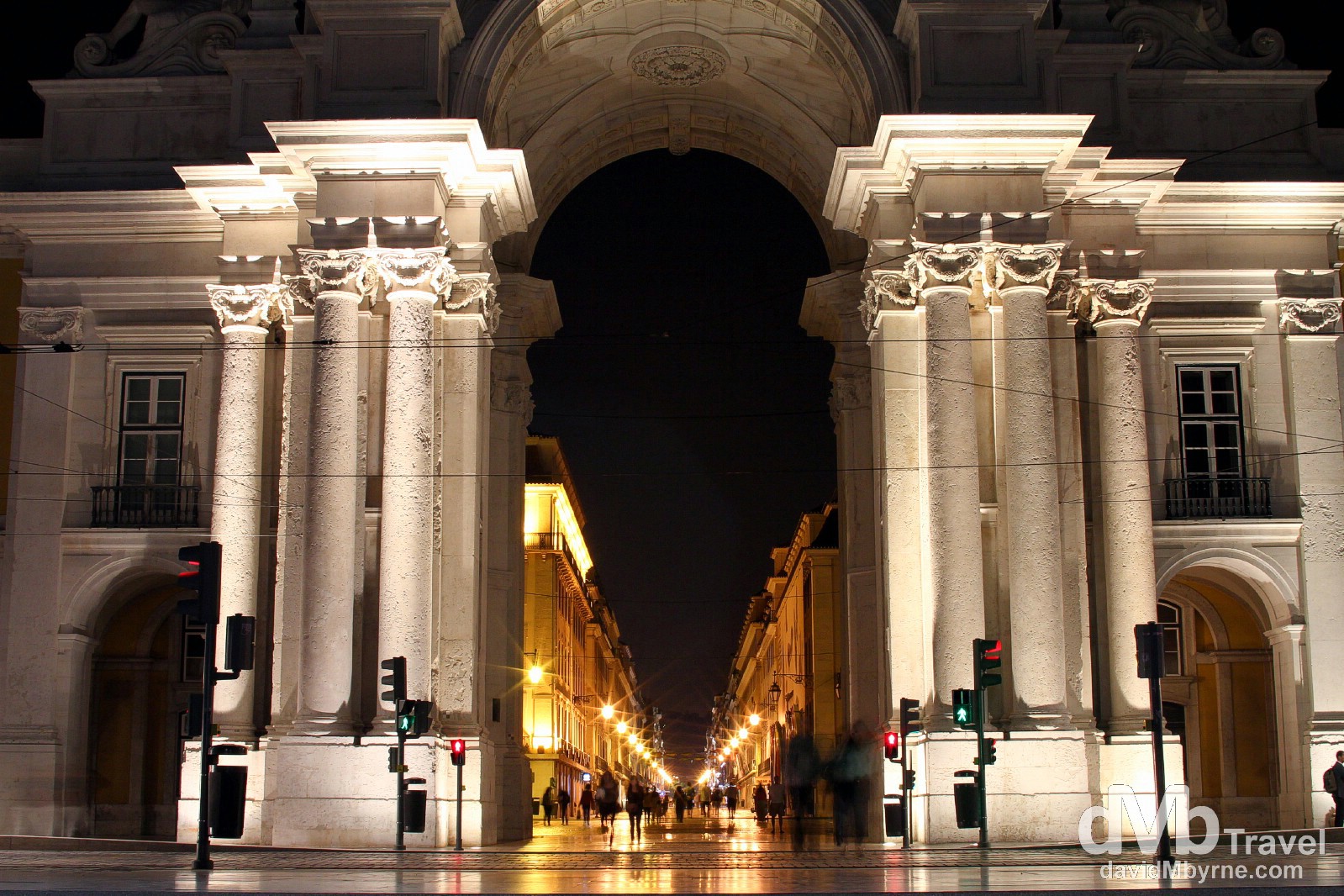 Lisbon is hilly, an achingly hilly place in parts – you won’t see too many people on bicycles. Trams – some rickety but mostly of the modern, sleek, air-conditioned kind – ply its streets. The majority of them are a bona fide & heavily utilised means of public transport for the Lisbon masses. But some, like the Gloria Funicular, are mostly to appease the tourist hordes. 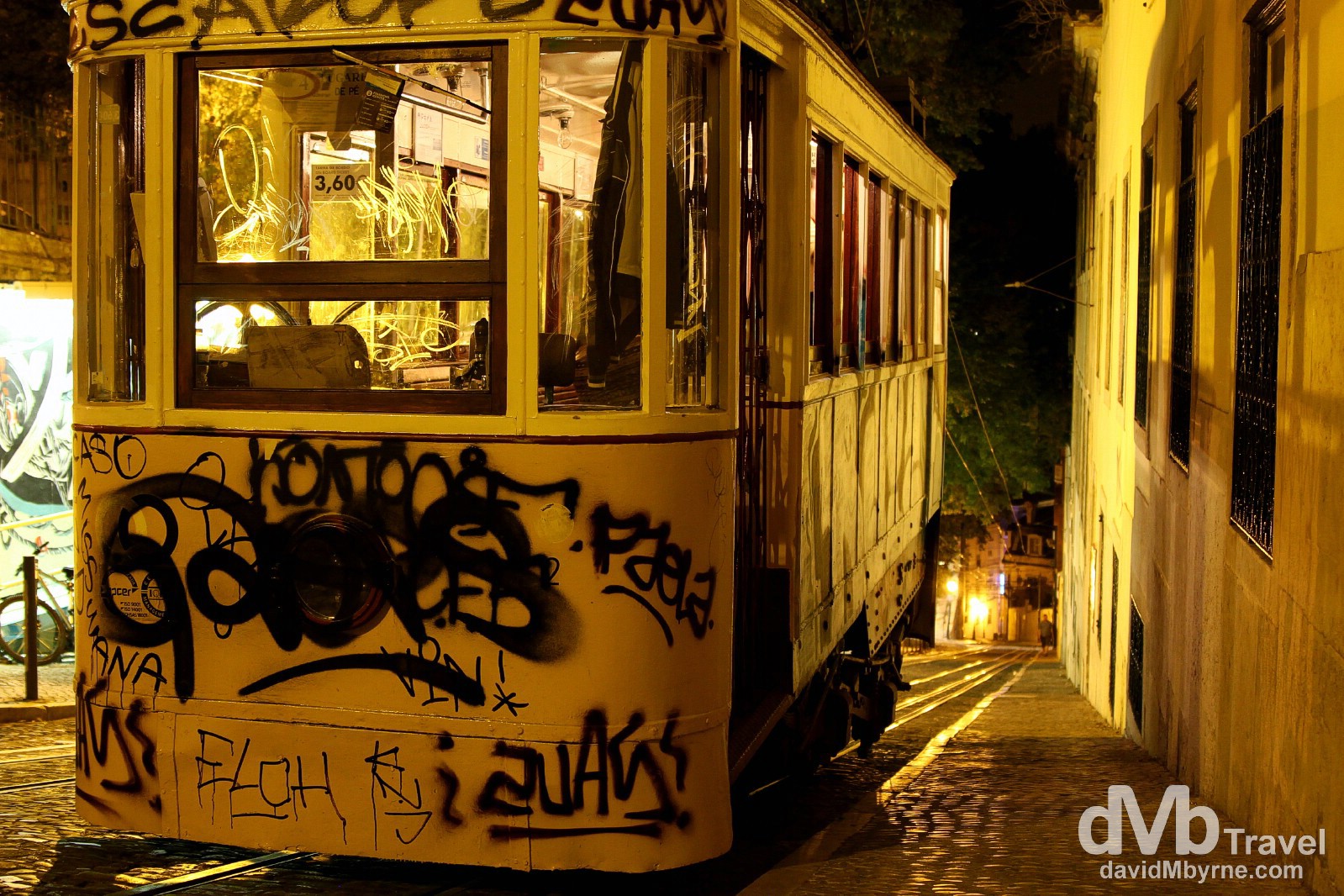 The Gloria Funicular (Elevador da Glória), plies a short but very steep route between the Baixa & Bairro Alto districts of the city – the route is a 5 minute walk or an equally steep, if you’ll pardon the oh-so obvious pun, €3.60 one-way fare. First opened in 1885, it was electrified in 1915 & was designated a National Monument in 2002 – I’m not too sure when it was decorated with graffiti. Lisbon, Portugal. August 25th 2013. 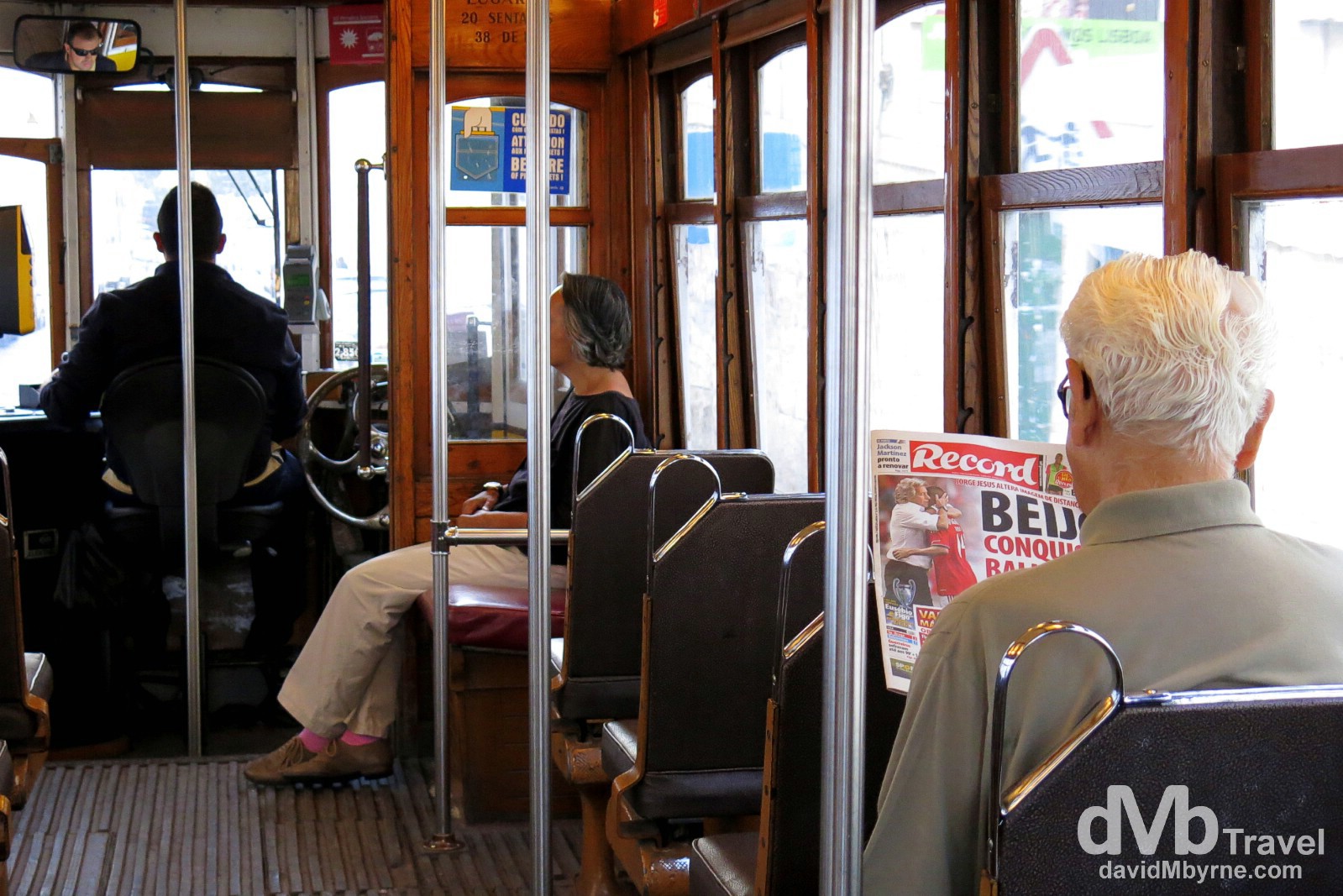 Taking a trip on the number 28 tram is a must-do when in Lisbon. Even though it plies a busy commuter route, the rickety old trams (seemingly imported from San Francisco) are also a popular tourist attraction as they trundle through and up & down the streets & hills of the city. This was my last tourist activity in Lisbon prior to my departure for Porto & I was up early on this morning in a bid to avoid the tourist hordes I’d seen packing the tram the previous days. It worked as there was only me, my camera and a few locals (5 actually) on board the tram, its old wood creaking with every turn as it meandered through the quiet streets. 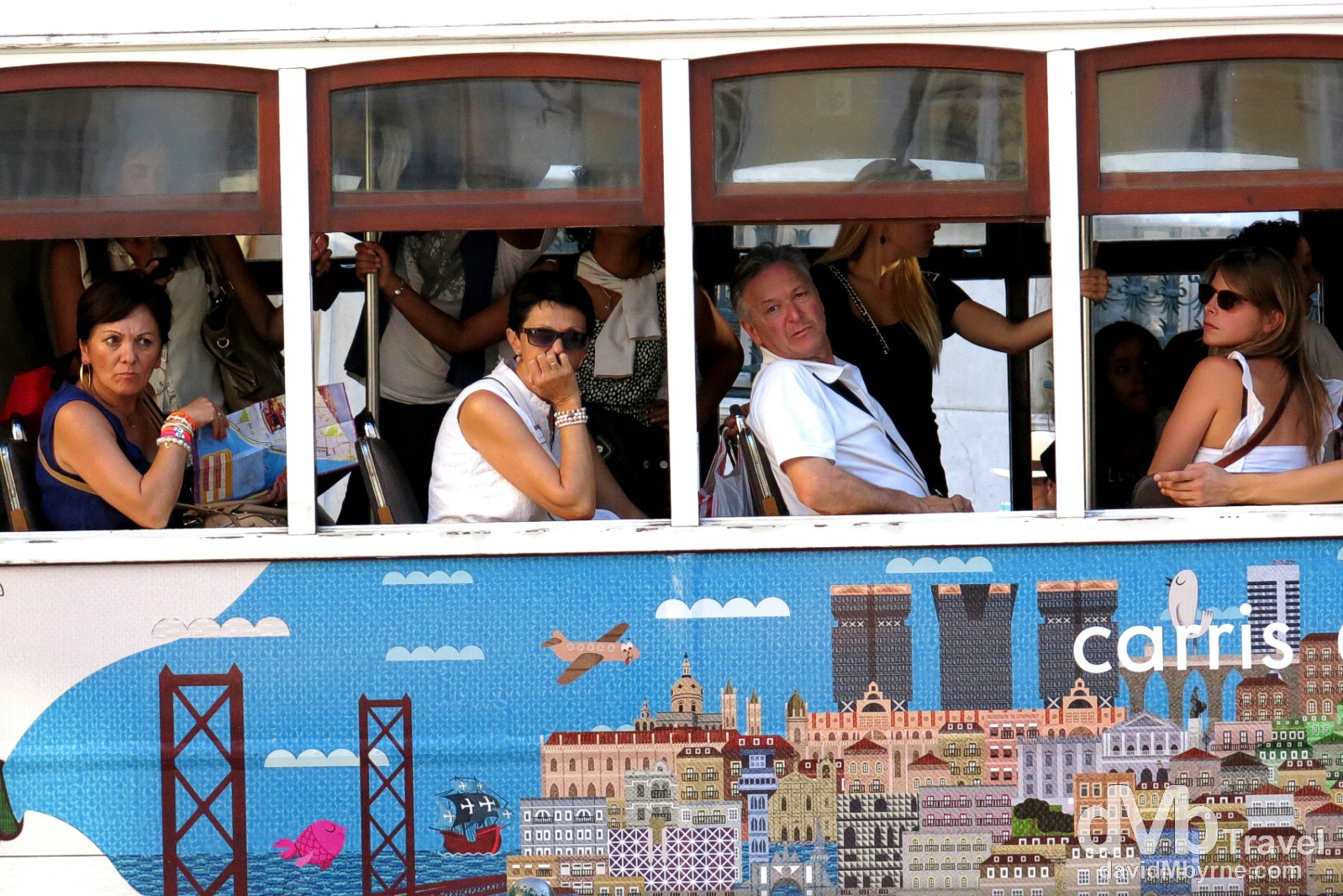 Lisbon is a city built on exploration, conquest & adventure – the Portuguese led the Age of Discovery, a period starting in the early 15th century and continuing to the 17th century during which Europeans explored Africa, the Americas, Asia and Oceania. The pioneering past is commemorated at the city’s impressive Monument To The Discoveries on the northern bank of the Tagus River in the historic Belem district of the city, a district where you will find, among other worthwhile sites, both of Lisbon’s UNESCO World Heritage listed attractions, Mosteiro dos Jeronimos (Jeronimos Monastery) & Belem Tower. 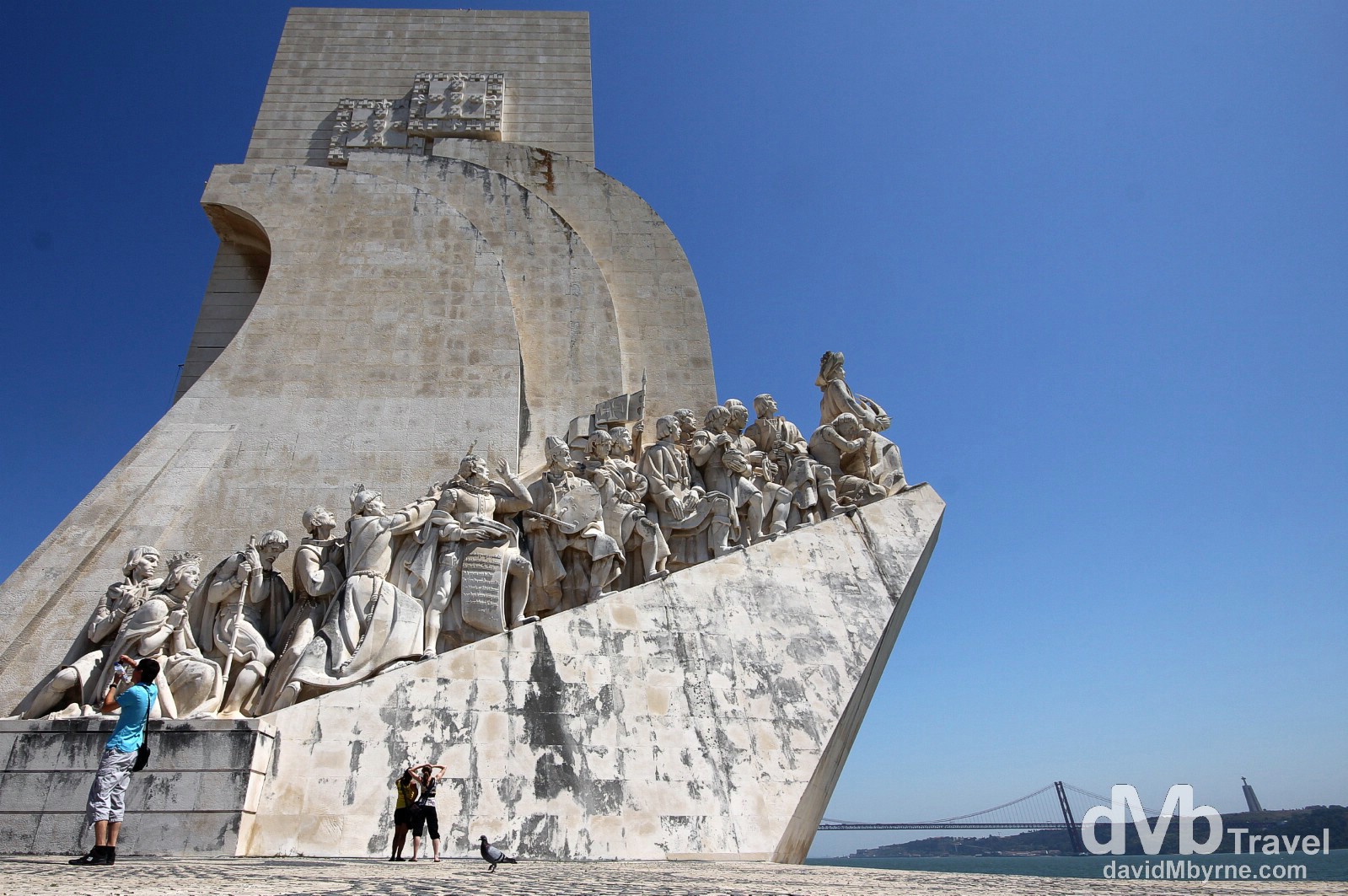 The mammoth Monument To The Discoveries is yet another Lisbon landmark that my wide-angle lens loved. The structure dates to 1960, the year which saw the 500th anniversary of the death of Henrique the Navigator (1394-1460), a Portuguese explorer regarded as the most important figure associated with the Age of Discoveries. Situated on the banks of the Tagus River, it was from here that ships departed on their voyages of discovery. In addition to the main statue of the aforementioned Henrique (front & holding a model of a carrack, a large galleon sailed in the Mediterranean as a merchantman), the monument contains a total of 33 figures from the history of the Discoveries, Early Navigators including the likes of Vasco Da Gama, discoverer of the sea route to India in 1498, & Ferdinand Magellan, the first man to first to circumnavigate the globe. It’s a veritable who’s who early seagoing heavy hitters. Belem, Lisbon, Portugal. August 26th 2013. 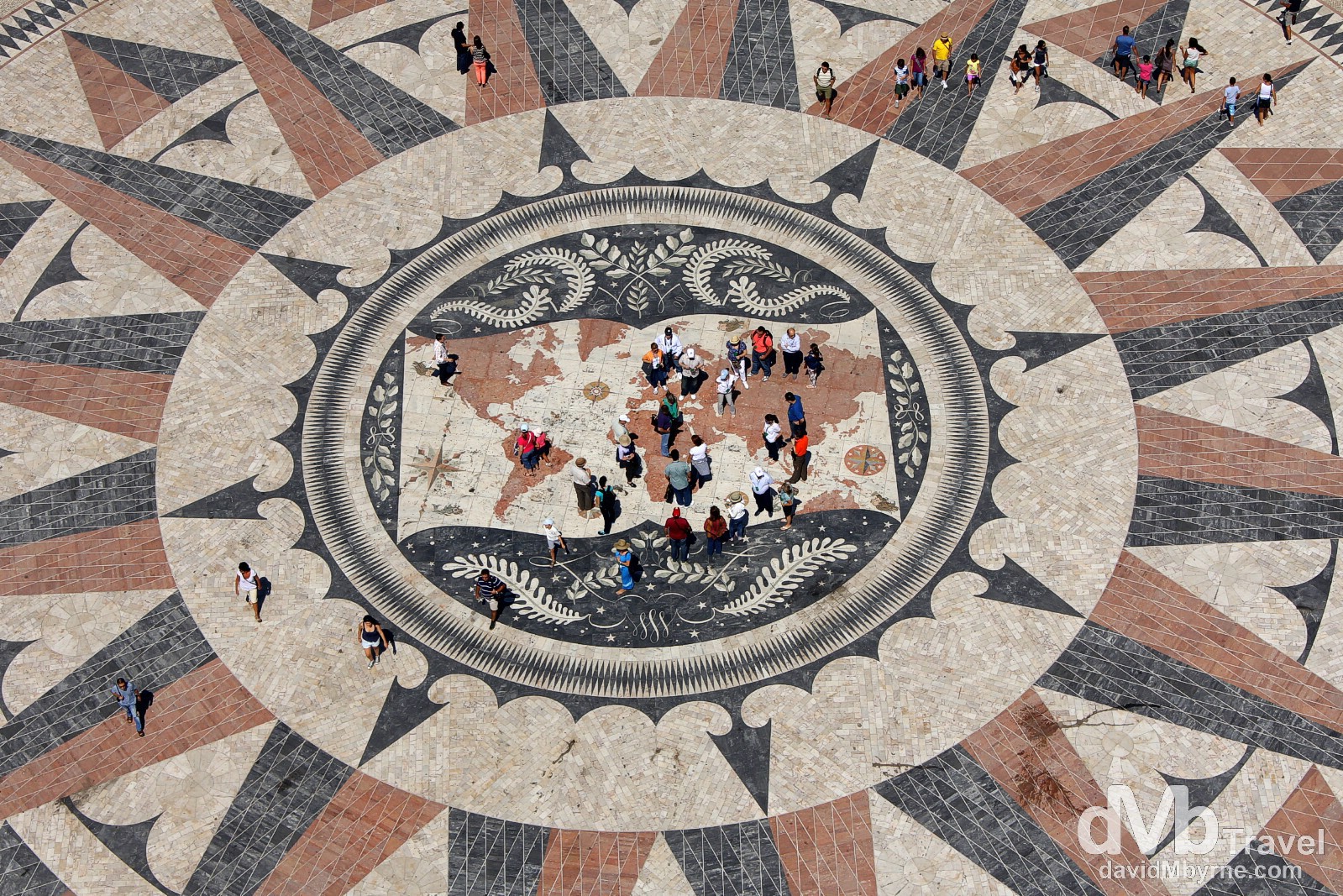 A viewing platform adorns the top of the Monument To The Discoveries from where one gets a bird’s eye view of the square fronting the monument. The predominant feature of the square, which was gifted to Portugal by the government of South Africa, is the 50-metre-diameter (160 ft) Rosa-dos-Ventos (Compass Rose). Comprising various types of marble, its design includes a central Mappa Mundi, a medieval European map of the world, that is 14 metres wide & shows the routes of Portuguese carracks and caravels during the Age of Discovery. Belem, Lisbon, Portugal. August 26th 2013. 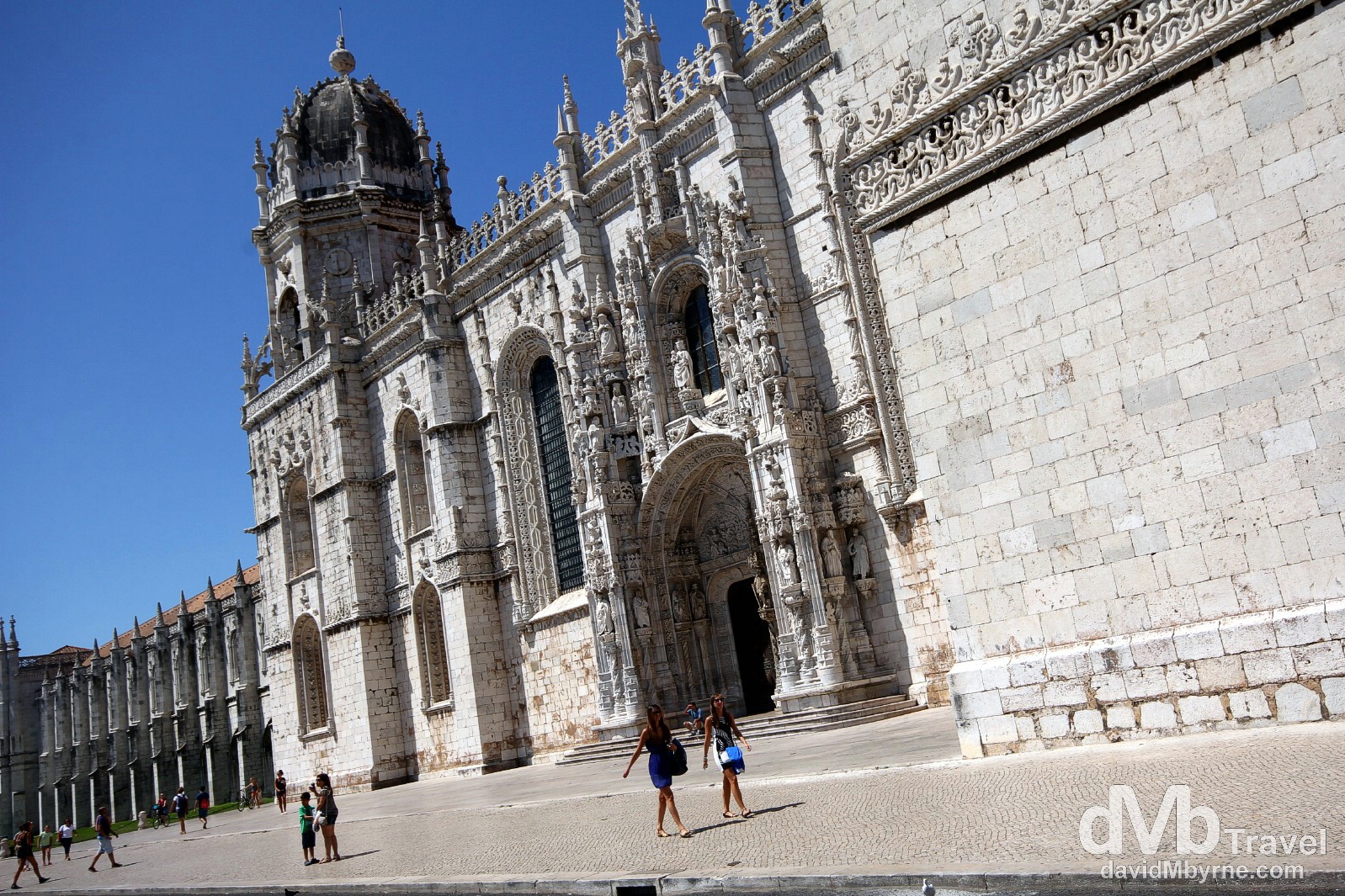 The is the massive Mosteiro dos Jeronimos (Jeronimos Monastery), one of two UNESCO-listed World Heritage sites in Lisbon (the other, Belem Tower, is not too far away). Built in the Manueline (Portuguese late Gothic) style, it was completed in 1601 having taken 40 years to build. Seen here is the structure’s South Portal, the stunning side entrance to the monastery. The shrine-like portal is large – 32 metres high & 12 metres wide. Extending two storeys, its ornate features include an abundance of gables and pinnacles with many carved figures standing under a baldachin, an ornamented canopy supported by columns or suspended from a roof or projected from a wall, in carved niches. The level of carving detail really is quite amazing & I took more than a few pictures up close to capture the astonishing craftsmanship. Even so, a structure like this needs a wide-angle lens, although even that was insufficient to capture the whole of the structure in one shot. Lisbon, Portugal. August 26th 2013.

Parque das Nações (Park of the Nations) is an area to the east of the City Centre that was totally rejuvenated to host the Expo 98 World’s Fair. Offering a distinct contrast to the ancient, stone & tile Lisbon City Centre, the area has lived beyond the Expo & today it is a modern, thriving & stylish part of the city, attracting 18 million tourists a year to its gardens, museums, commercial areas and modern buildings. 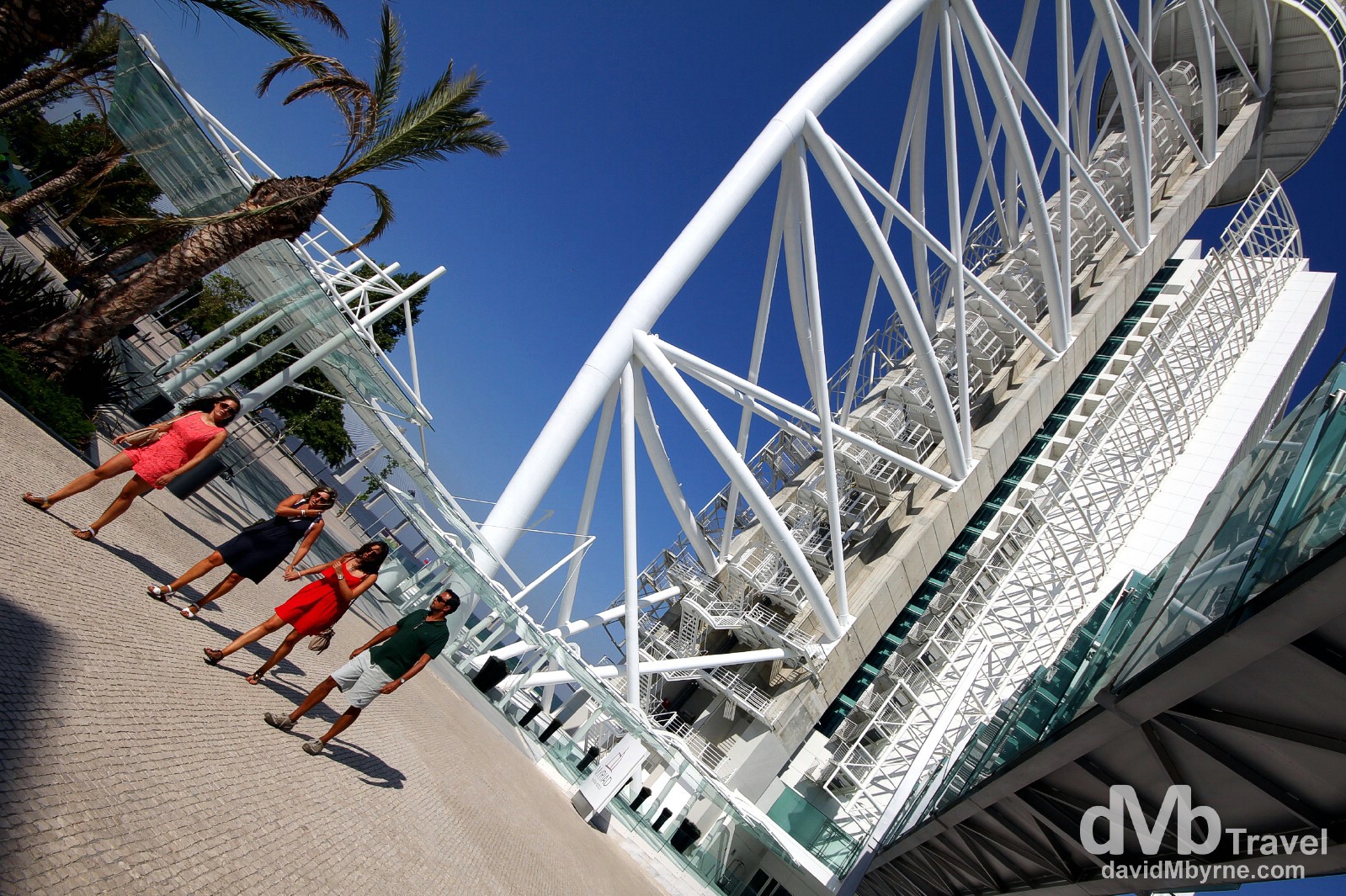 The most striking of all structures in Parque das Nações (Park of the Nations) is the unmistakable Vasco De Gama Tower, a 145 metre lattice tower with skyscraper built overlooking the Tagus River. The steel structure, which represents the sail of a caravel, was also built as part of the areas rejuvenation ahead of the Expo 98 World’s Fair. I spent quite a bit of time staring up at this structure – it looked great set against the late afternoon, bright blue sky. Parque das Nações, Lisbon, Portugal. August 26th 2013.

The Santa Justa lift is a Neo-Gothic style vertical lift in the centre of Lisbon – the only vertical lift in the city – that offers panoramic views of Lisbon from its viewing terrace. First built in 1902, the Lift is classified as a National Monument. I paid a couple of visits up here but made sure to leave my final visit until close to sunset, when the city was bathed in a nice soft glow. 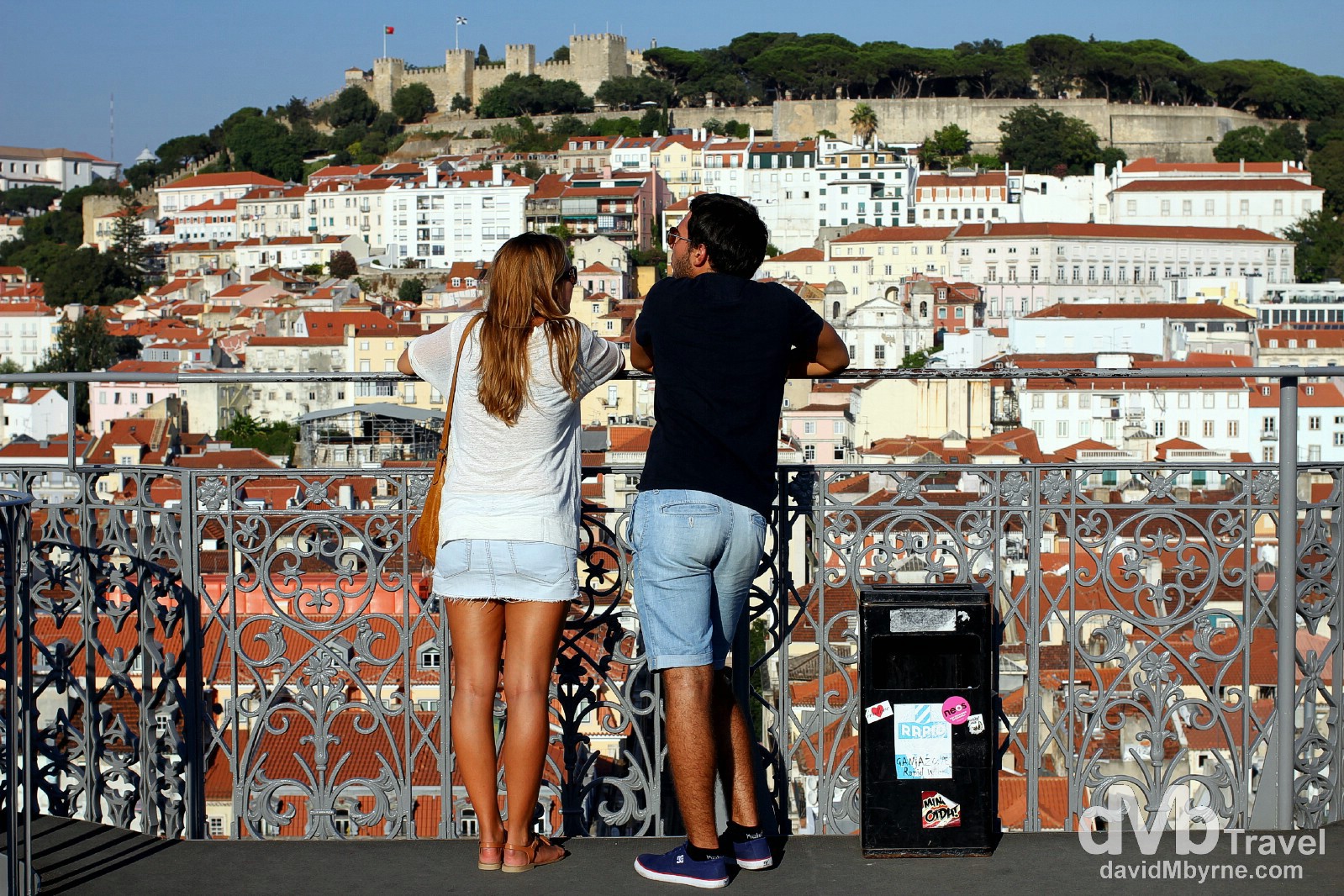 Peering across to the Alfama district of Lisbon from atop the Santa Justa Lift, Lisbon, Portugal. August 26th 2013.

In the distance is the Alfama district of the city, home to one of Lisbon’s most prominent landmarks, the Castle of Sao Jorge. Alfama is the oldest part of Lisbon & thanks to its elevated location it was the only part of the city not to suffer widespread destruction during the 1755 earthquake. It’s an area with distinct Moorish influences, narrow streets, and numerous vantage points with great views back over Lisbon.

Video || Lisbon As Seen From The Alfama District 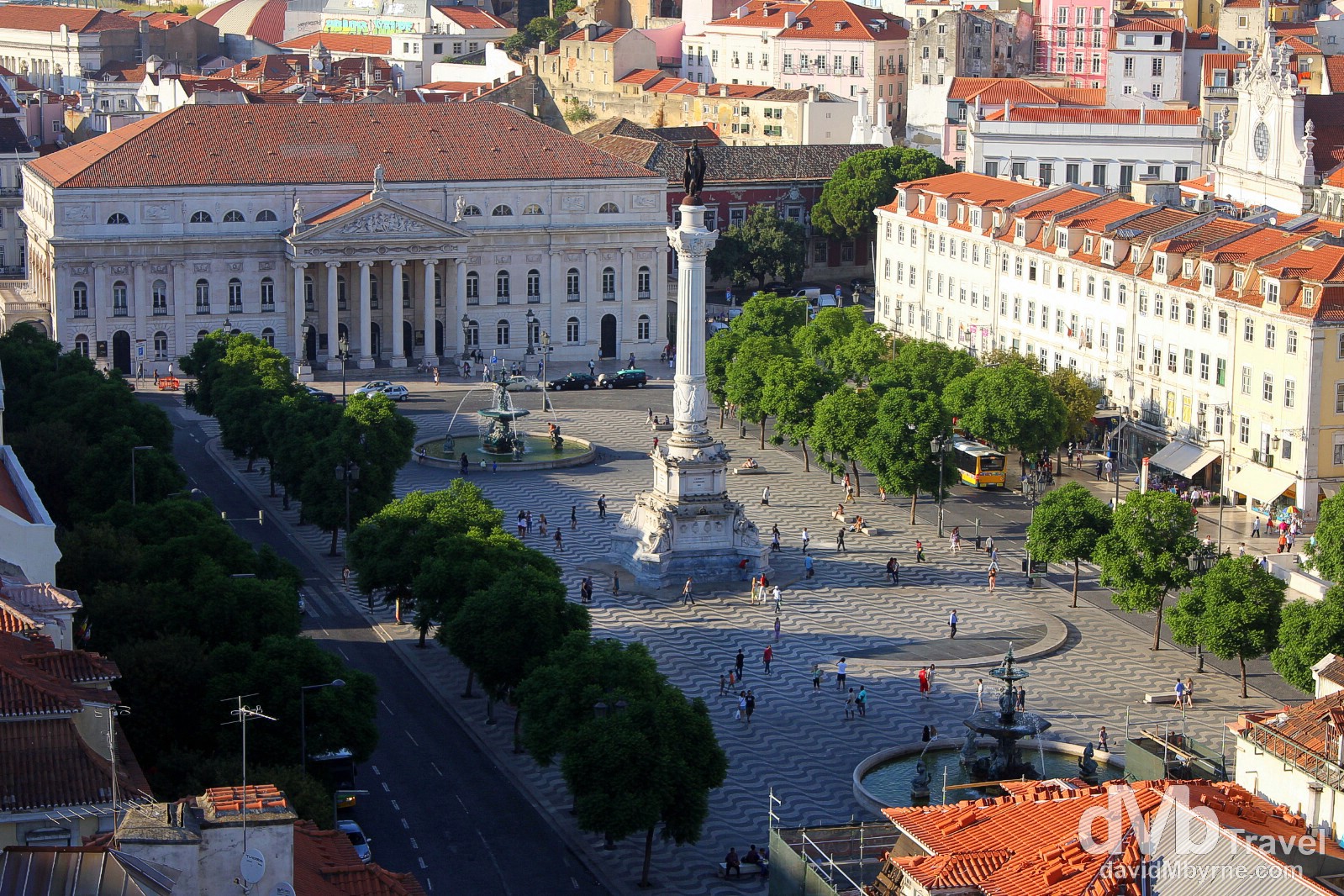 A few other captures from my time in Lisbon. 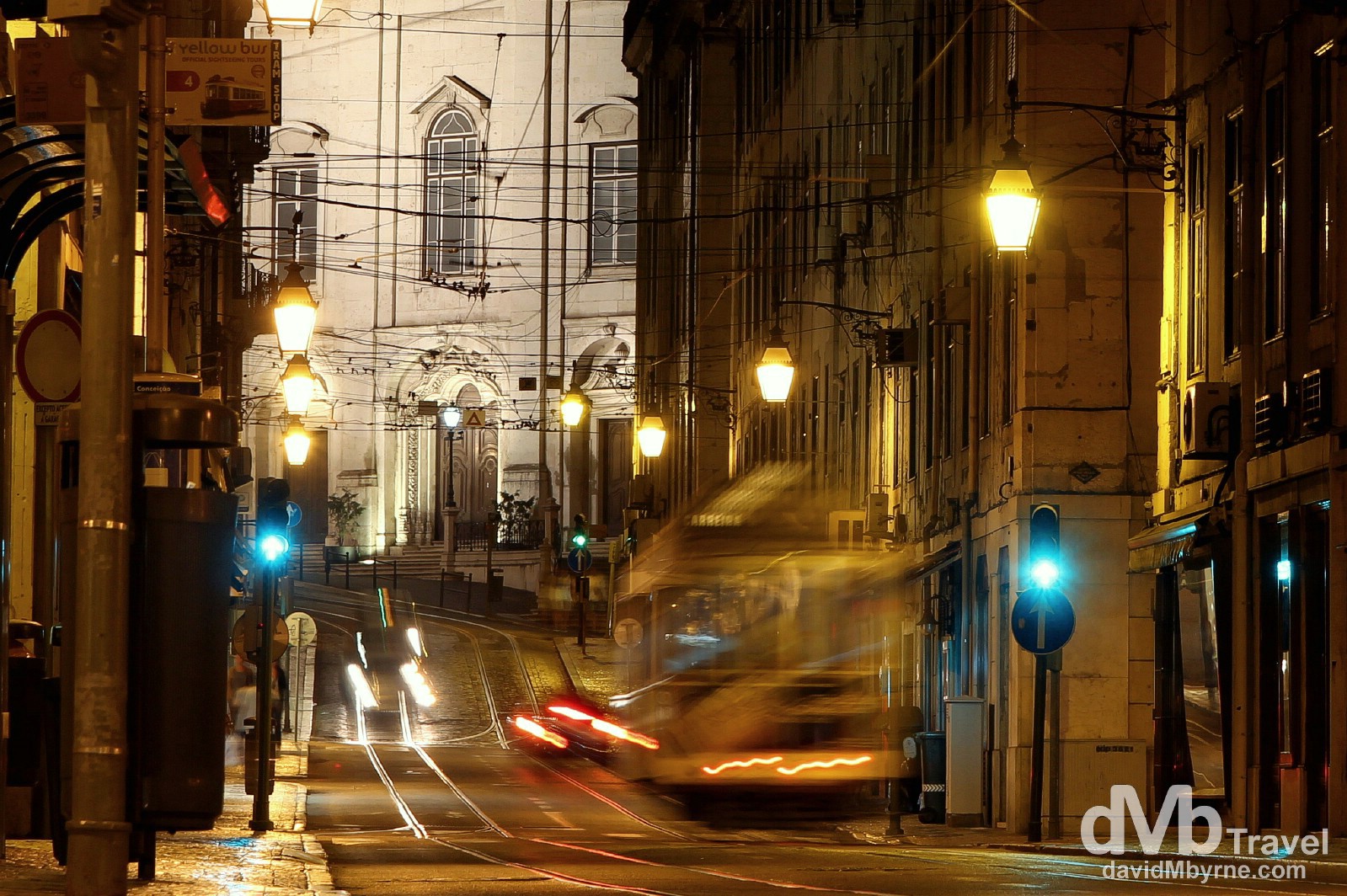 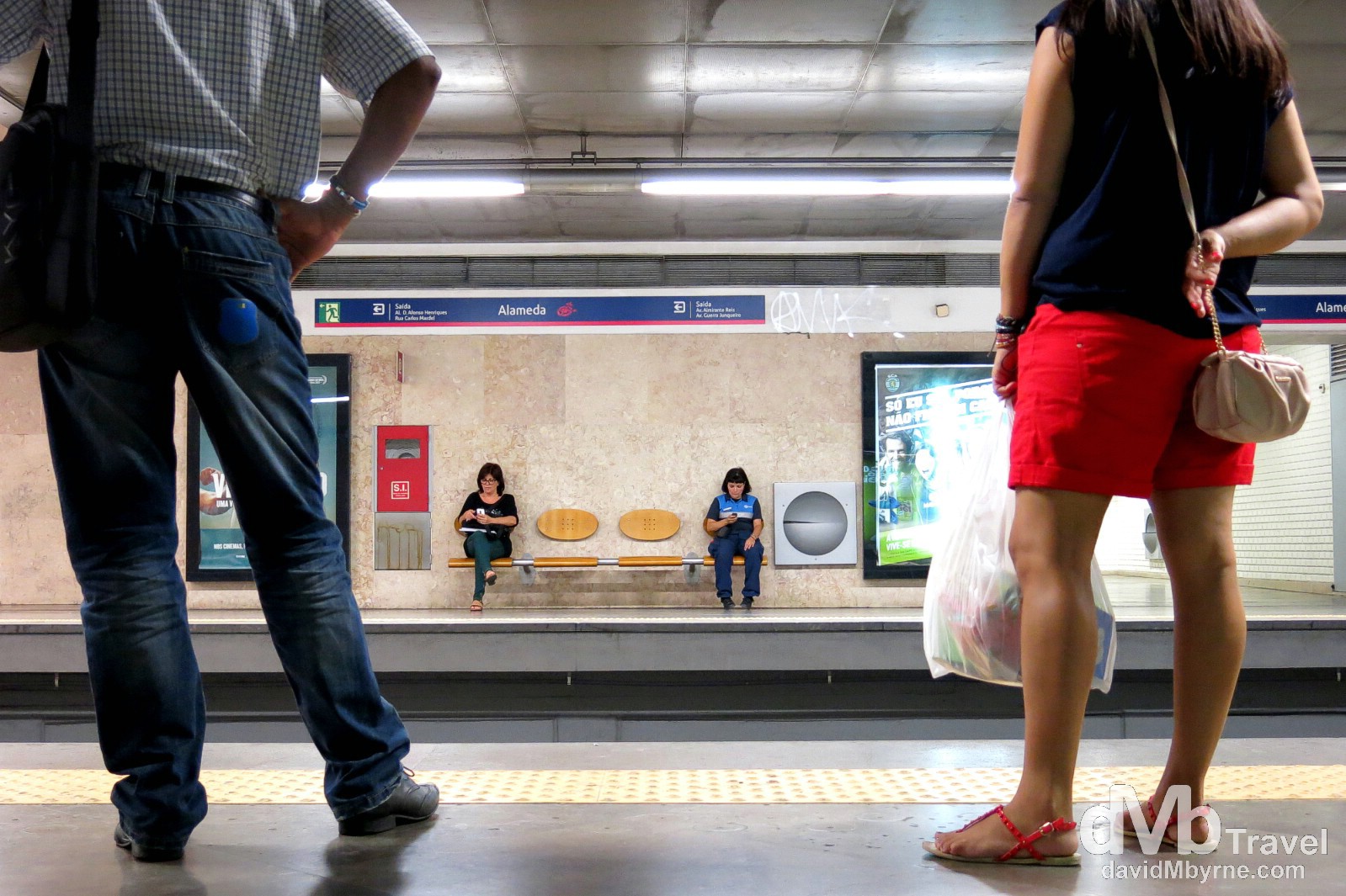 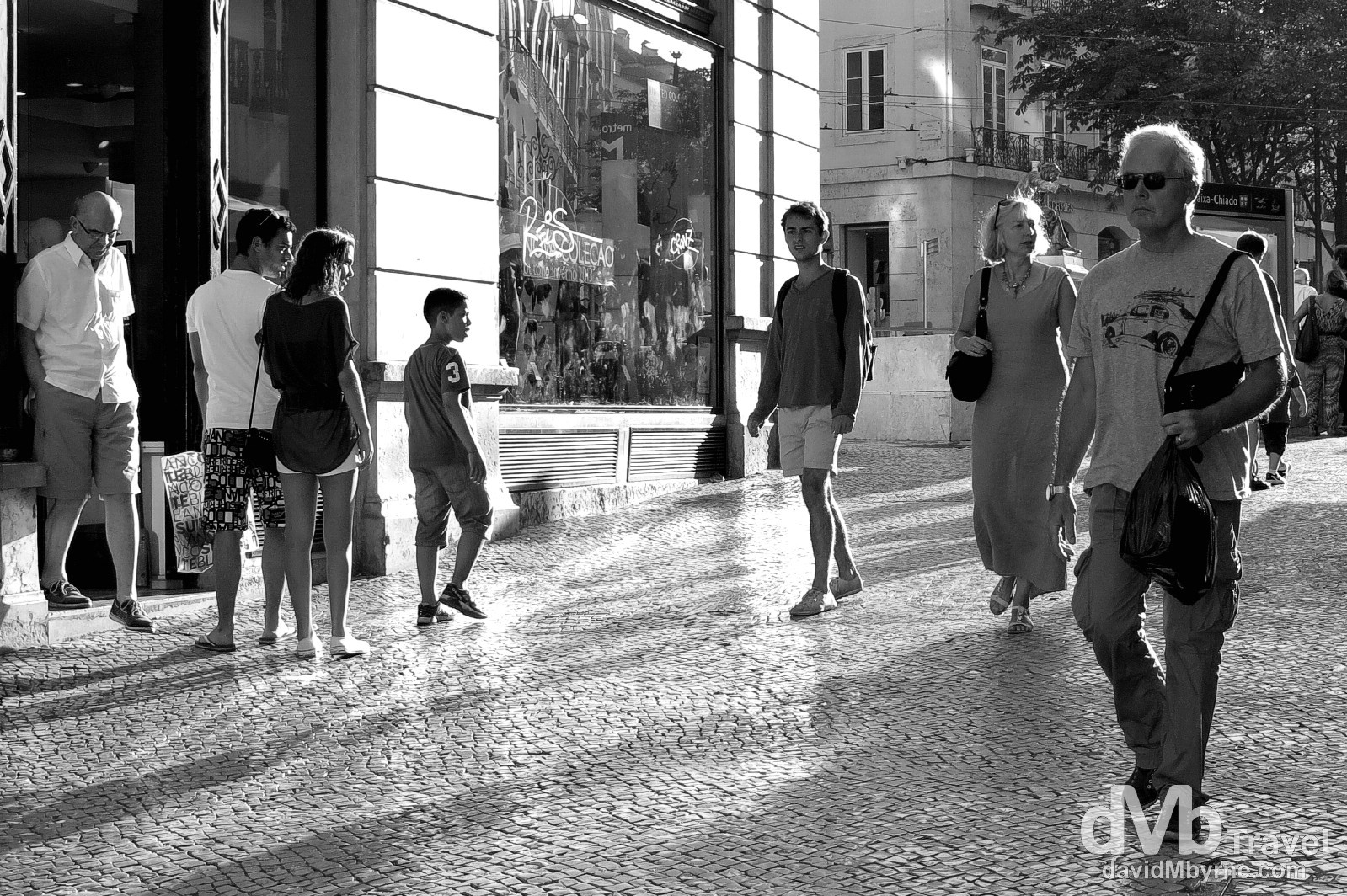 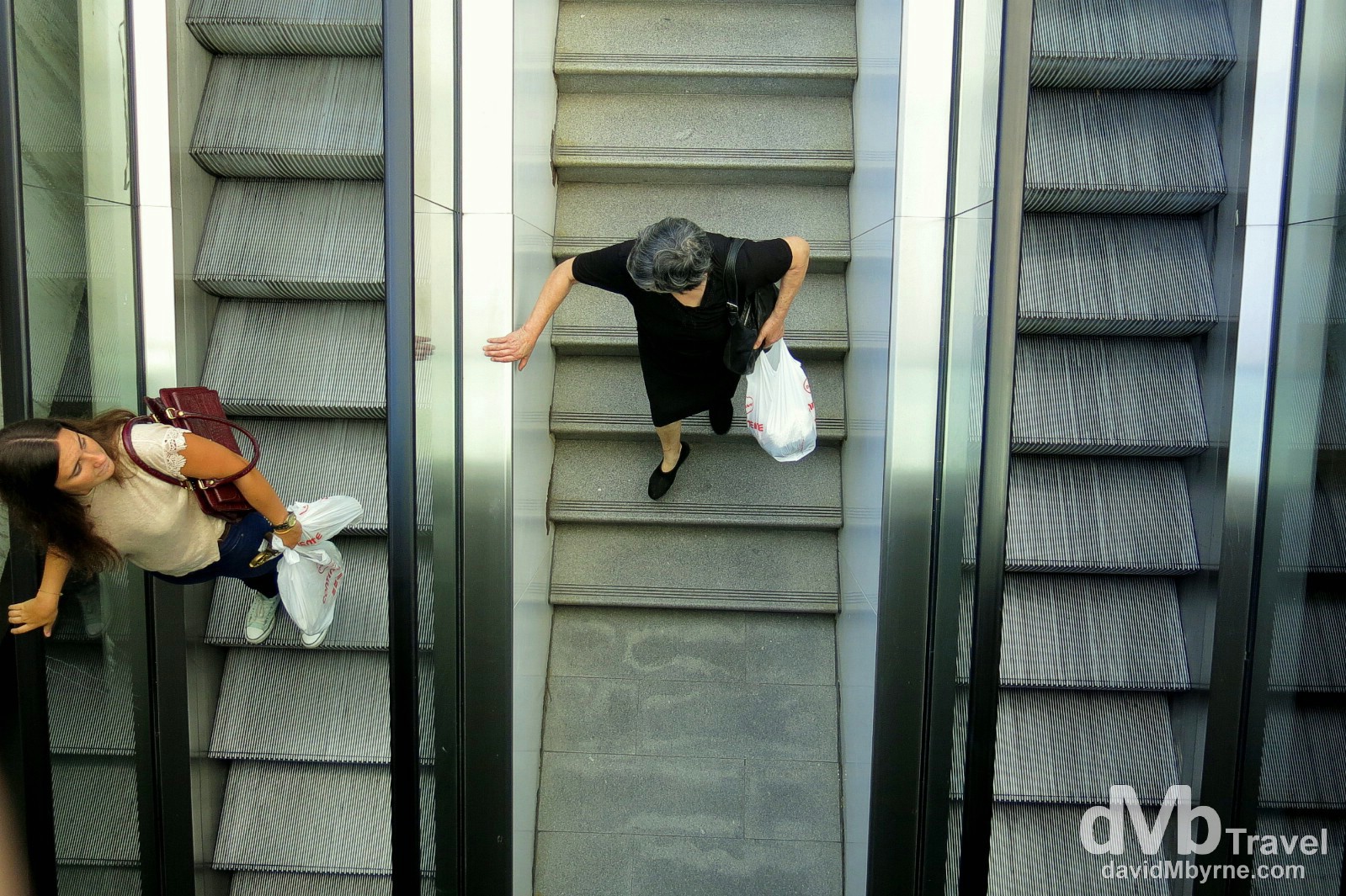 On platform 1 of Oriente Train Station waiting to get the high-speed train to Porto. Oriente, Lisbon, Portugal. August 27th 2013.