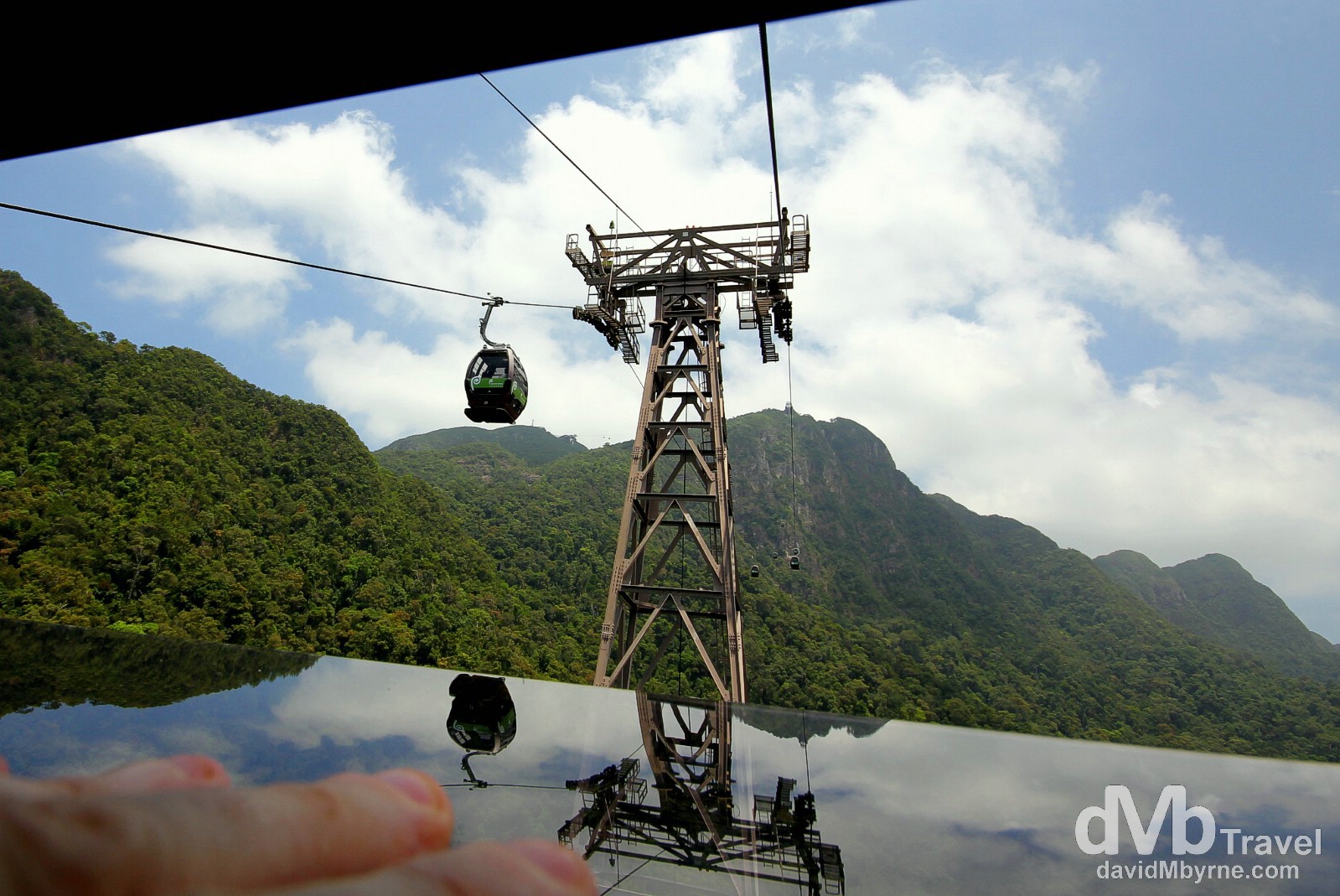 It’s 5 p.m. on… on… just checking… on Thursday. It’s my second day on this my second trip to Malaysia. I’m on Pentai Cenang, a 2 kilometre beach on the west coast of the Malaysian duty-free island of Palau Langkawi, which itself is just off the northwestern coast of the Malaysian mainland. I’m sitting here on the veranda (I was going to call is a balcony but as far as I’m aware a balcony has to overlook something) of my little garden shed-esque room drinking some well-earned, ice-cold cans of Skol beer, a palatable derivative of European Carlsberg, having spent most of today zipping around the island on a moped taking in a few of its sights.

A picture taken through a narrow cap in a window of the Langkawi Cable Car, the most popular tourist attraction on the island. I was ascending when I took this & needed to keep the spring-mounted window open with my left hand (bottom left) while holding the camera with my right. I’m a sucker for reflections so of course I particularly like the reflections seen here; I feel they detract from the poor mountain visibility caused by low-lying haze emanating from, I assume, the jungle floor below some distance below. In the distance, beyond the mammoth 70 metre-high Tower 2 seen here, is the longest free span section of the whole 2.2 kilometre cable car ride, the 950 metre stretch between Tower 2 & the Middle Station. Gunung Machinchang, Langkawi Island ( 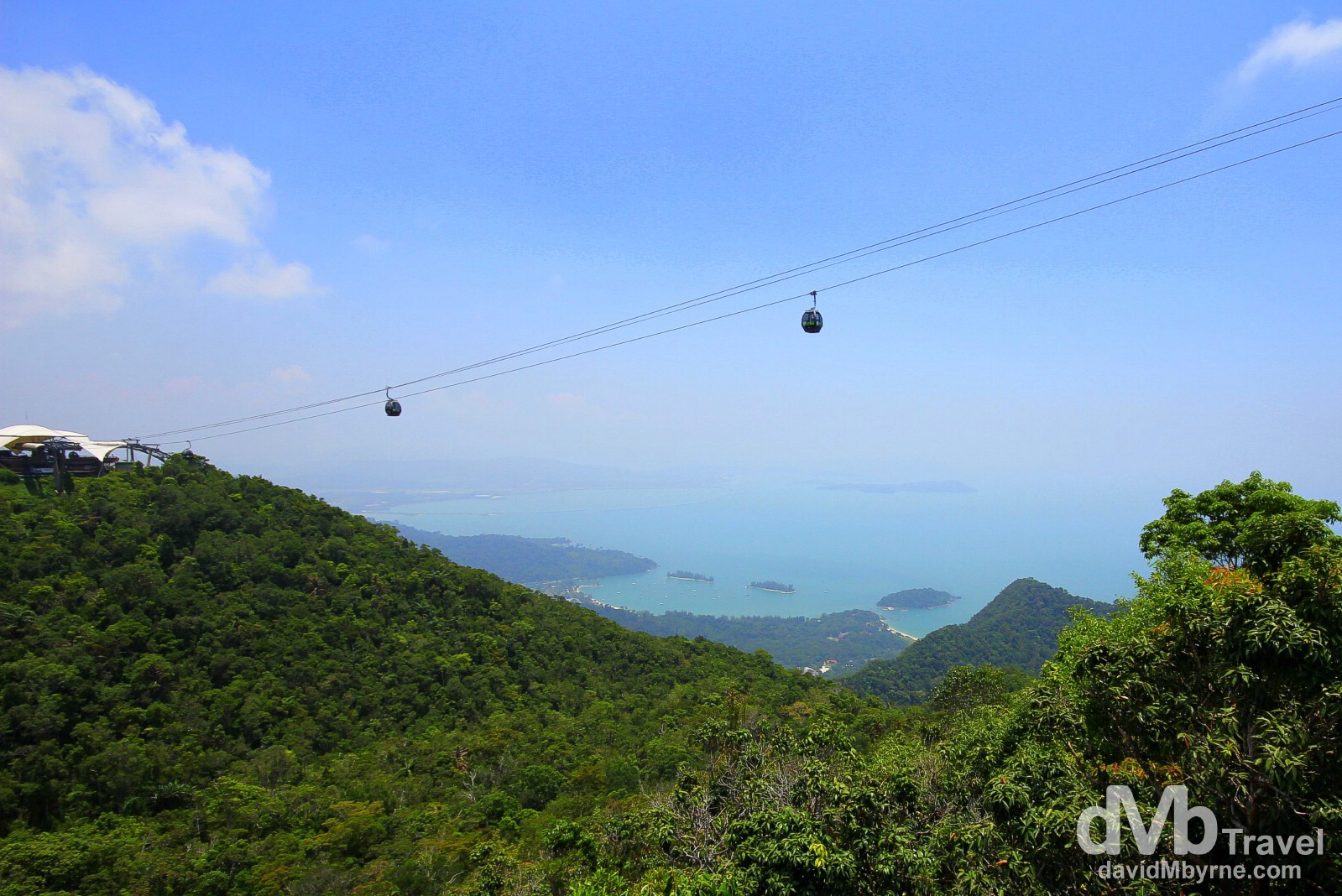 A shot of the west of Langkawi Island from the Top Station of the Langkawi Cable Car. The Cable Car, which opened in 2003, is 2.2 kilometres long & spans a section of the island’s Machincang mountain range. It has 3 stations – Base, Middle (seen to the left, 650 metres above sea level) & Top (708 metres above sea level), above which is a viewing platform from where I took this picture. The visibility on this day was very poor – I had to crank the saturation in this & the next picture to show any kind of detail of the surrounding jungle-clad landscape & distant seascape. Gunung Machinchang, Langkawi Island, Malaysia. March 22nd 2012.

Changes
It’s almost 9 years to the day since I was last here in Pentai Cenang in Langkawi. I arrived here yesterday from Thailand, although when I initially arrived I wasn’t sure I was in the right place. Developers have been busy over the past 9 years (& are still busy today) & to say the locality has undergone something of a face-lift is an understatement. The Pentai Cenang of 2003, the sleepy, relaxed, backpacker hangout that I remember fondly, is long gone, yet another victim of crass over development & the push for the tourist ringgit. The road running parallel to the beach, lined only by bushes 9 years ago, is today one long line of tacky t-shirt shops, massage parlours, spas, convenience stores, cafes, restaurants & travel shops, all pretty much offering the same product or service. Congratulations Malaysia but you now have your own tacky, over developed beach resort to rival the likes of Kuta Beach in Bali or Ko Phi Phi in Thailand. Pentai Cenang beach itself, which 9 years ago was a beautifully wide white-sand beach fronted by nothing more than palm trees & rustic chill out bars selling cheap cans of Tiger beer, has been tragically encroached upon by resort after resort & has now lost all its character. Don’t get me wrong, it’s still a nice beach & I’m glad to be back but having seen it as it was 9 years ago I can’t help but pine for the Pentai Cenang of 2003. 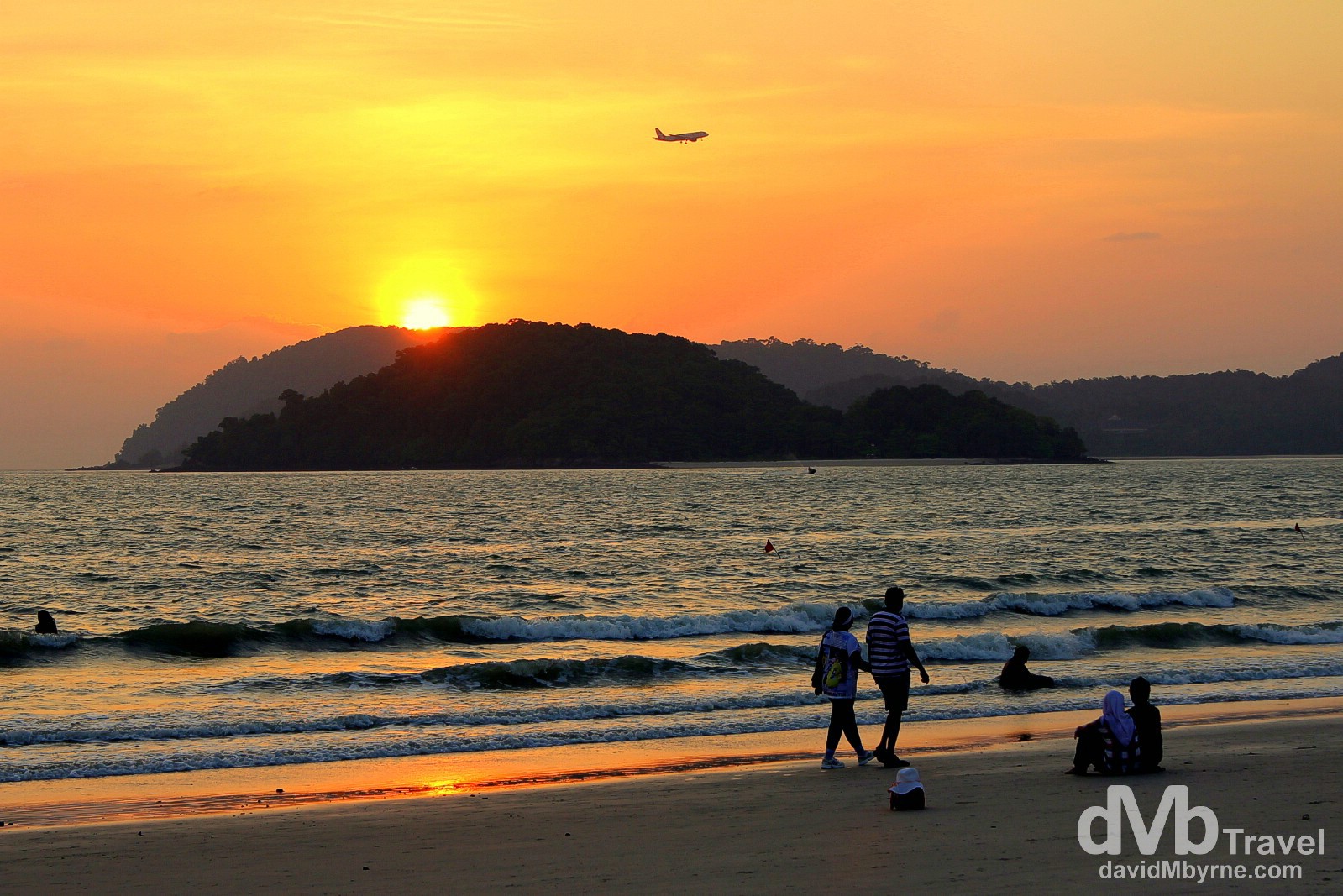 I came to Langkawi slightly disappointed with what I saw with regard to sunsets in Railay, Thailand. Unfortunately they were not much better here. Pentai Cenang beach, Langkawi, Malaysia. March 21st 2012.

Malay Smiles
Not to rip on the Thais of course (it’s the so-called ‘Land of Smiles’, after all) but Malaysians in general seem a happier lot. The immigration guy at the ferry port, the 1st Malaysian I interacted with, not only acknowledged me but actually smiled as well (& what is it they say about 1st impressions). And the Malaysians I’ve interacted with here on Pentai Cenang have at least pretend to be cordial. Oh, and taxis here are on the meter – no haggling, no being ripped off. Take note Thailand.