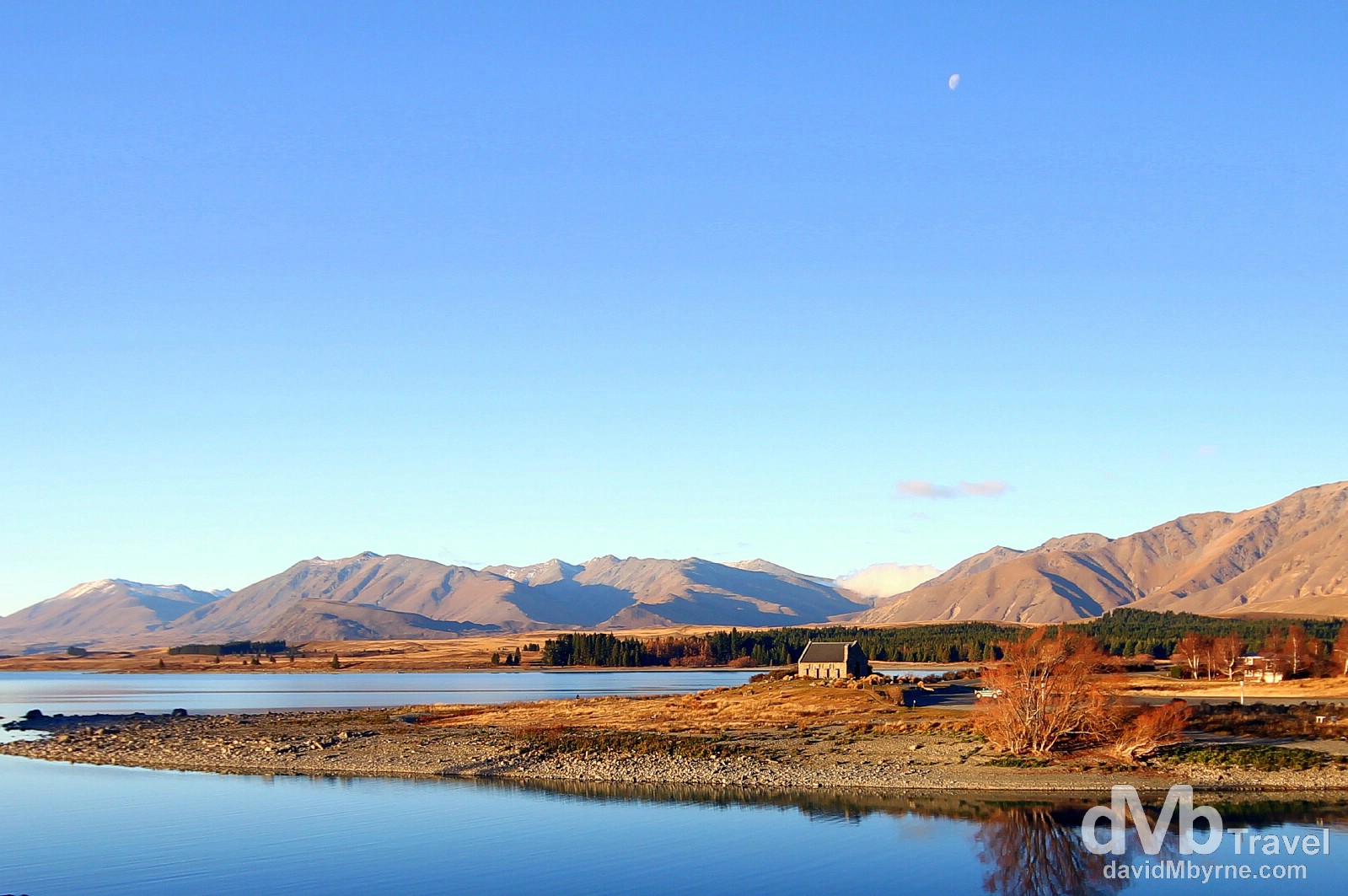 Sitting in the heart of Mackenzie Country, slap-bang in the centre of New Zealand’s outdoorsy South Island, is Lake Tekapo, the second-largest of three roughly parallel turquoise-blue lakes running north–south along the northern edge of the Mackenzie Basin. It’s a stunningly beautiful part of the world, an area of high ground, clean air, expansive plains, distant mountain ranges & turquoise lakes. One of my fondest memories from my previous, 2003 trip to New Zealand was the time I spent here by the shores of Lake Tekapo. Needless to say I was really looking forward to returning & aside from a bit more lake front development it hasn’t changed all that much – it’s still drop-dead gorgeous, still an achingly beautiful part of the world.

The Church of The Good Shepherd bathed in late afternoon sunlight perched on the shores of Lake Tekapo. The small, iconic church was built in 1935 & was the first church built in the Mackenzie Basin. It’s arguably one of the most photographed churches in New Zealand. It features an altar window that frames stunning views of the lake and the mountains surrounding it. It’s a popular place to get married; the congregation will be small but at least the pictures will be killer. Lake Tekapo, ( 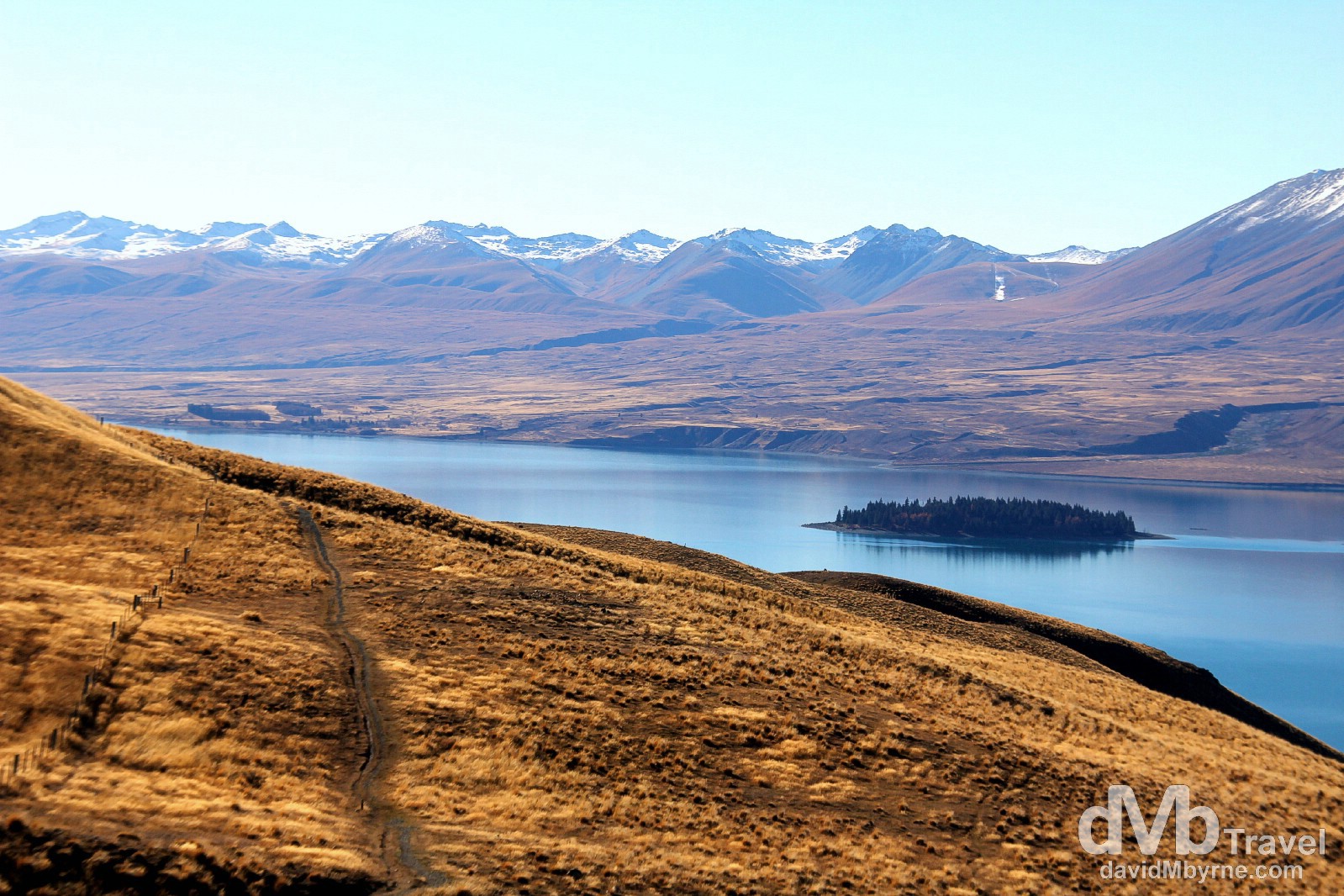 Mackenzie Country scenery as seen from the Mount John Walkway on Mount John. The Walkway is an 8 kilometre (5 mile), 3-hour-loop scenic walk up Mount John on the edge of Lake Tekapo. It starts at the lake shore and progresses up through pine forest (it’s steep in parts) to the open expanse of Mount John, providing fantastic 360-degree panoramic views of the lake, the surrounding mountains & Mackenzie Basin flats. It’s an easy walk, one with information panels periodically posted on the trail pointing out distant geological formations & educating as to how the region was formed. It was those same information panels that informed me that the small island seen here sitting in the middle of the southern portion of the 27-kilometre-long, 85 km² lake is called Matuariki Island & the peaks in the distance are part of the Two Thumb Range. I was really looking forward to retracing my steps on Mount John, having been first blown away by the sheer untouched beauty of the area on my first trip to Tekapo back in late May 2003. On the Mount John Walkway, Mount John, Lake Tekapo, South Island, New Zealand. June 1st 2012.

Lake Tekapo Formation
Turquoise Lake Tekapo, the second-largest of three roughly parallel lakes running north–south along the northern edge of the Mackenzie Basin (the other two being Lake Alexandrina & 178.7 km² Lake Pukaki, the largest of the three), lies in a trough scoured by the Tekapo Glacier during the most recent ice age, about 15,000-25,000 years ago, when the average temperatures were only 5-8 degrees Celsius below what they are today. As the climate warmed, the Tekapo Glacier retreated up the Godley Valley where it now exists as the Classen, Maud, Grey & Godley glaciers. These glaciers are the source of the Godley River, which is the major river feeding Lake Tekapo. 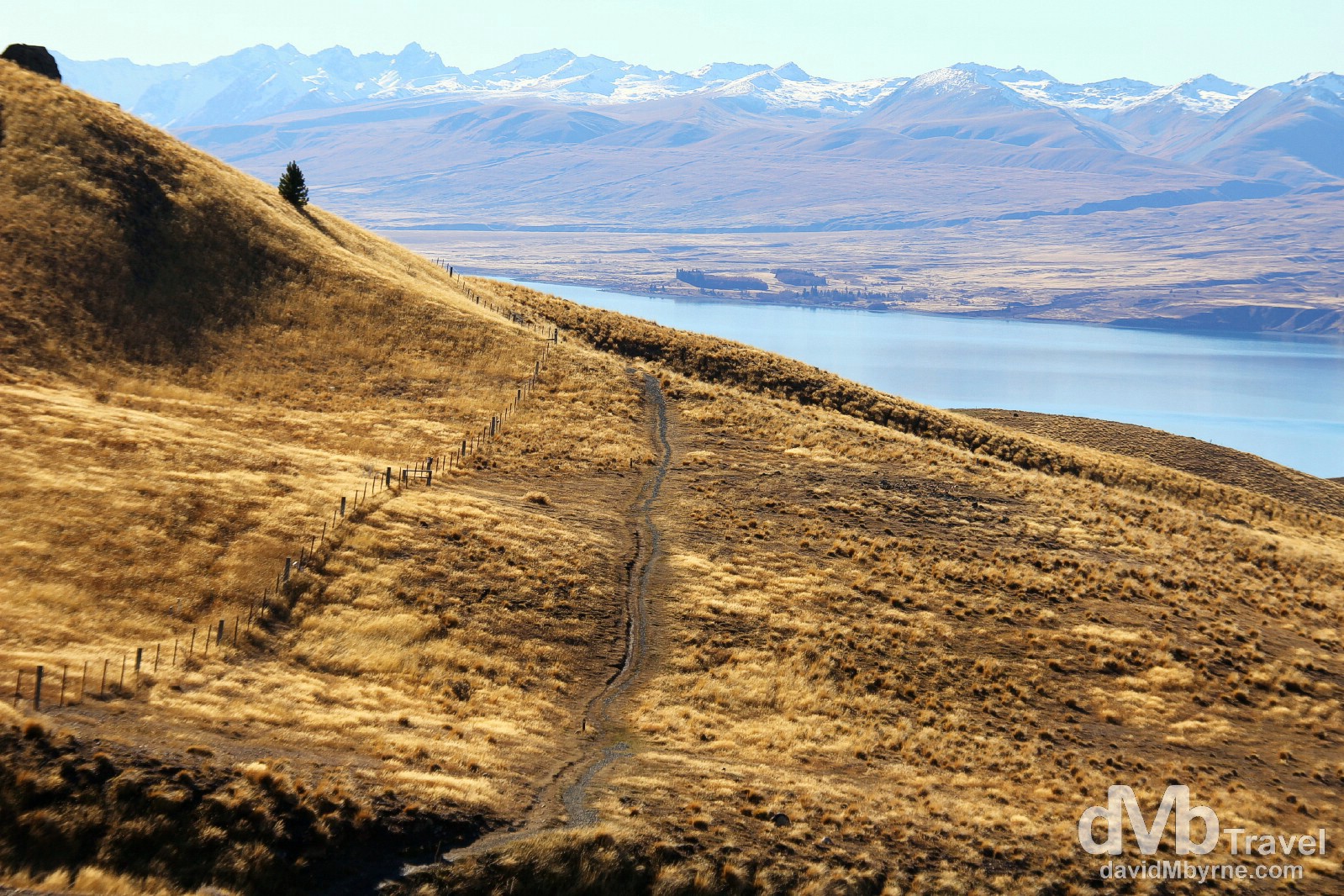 A section of the Mount John walk on Mount John, a peak (more a hill really) that as been scoured & shaped by successive ice ages. Mount John’s summit and slopes are criss-crossed by scars – the result of the rock partly collapsing when the surrounding glacier ice melted. Of course the scar seen running up the centre of this image can’t be blamed on melting glaciers. It’s a section of the 8-kilometre Mount John Walkway, one I’ve just walked. Mount John, Lake Tekapo, South Island, New Zealand. June 1st 2012 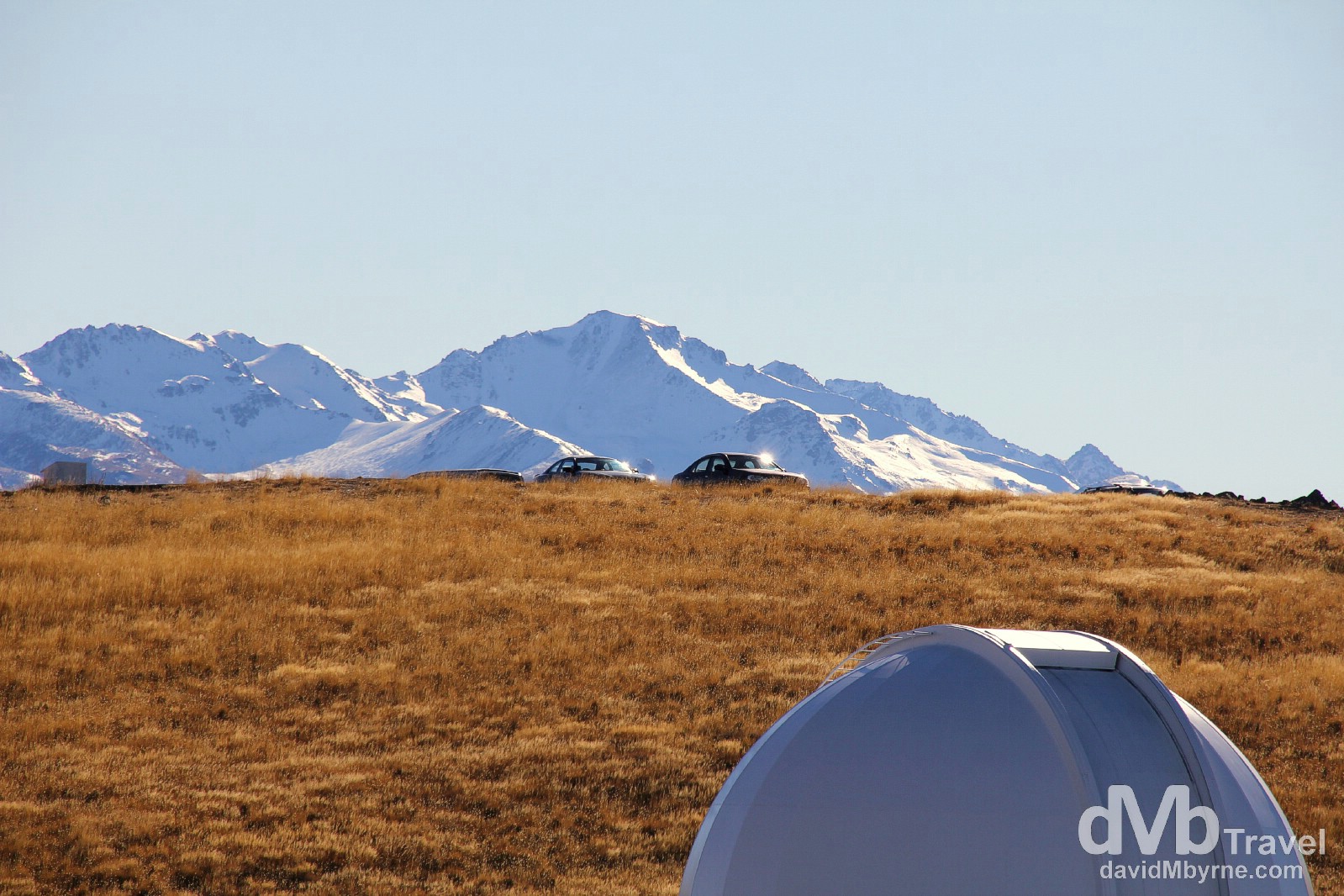 The dome of an astronomical observatory atop Mount John. The Mount John Observatory is New Zealand’s main astronomical research facility, internationally recognised as one of the best-situated, accessible observatories for viewing and researching the southern sky – the clear air & skies help, too. It is funded and administered by the University of Canterbury in Christchurch. There are four main telescopes here used for scientific research in astronomy & astrophysics, focused mainly on stars in our Milky Way Galaxy and on solar-system bodies. The biggest of the four, & the largest telescope in New Zealand, as a mirror diameter of 1.8 metres. Built in Japan & funded through Nagoya University, its purpose here is to search for planets around other stars using a technique known as gravitational microlensing. The facility does offer stargazing sessions, although the 2-hour sessions are not cheap costing about NZD$150. Mount John, Lake Tekapo, South Island, New Zealand. June 1st 2012 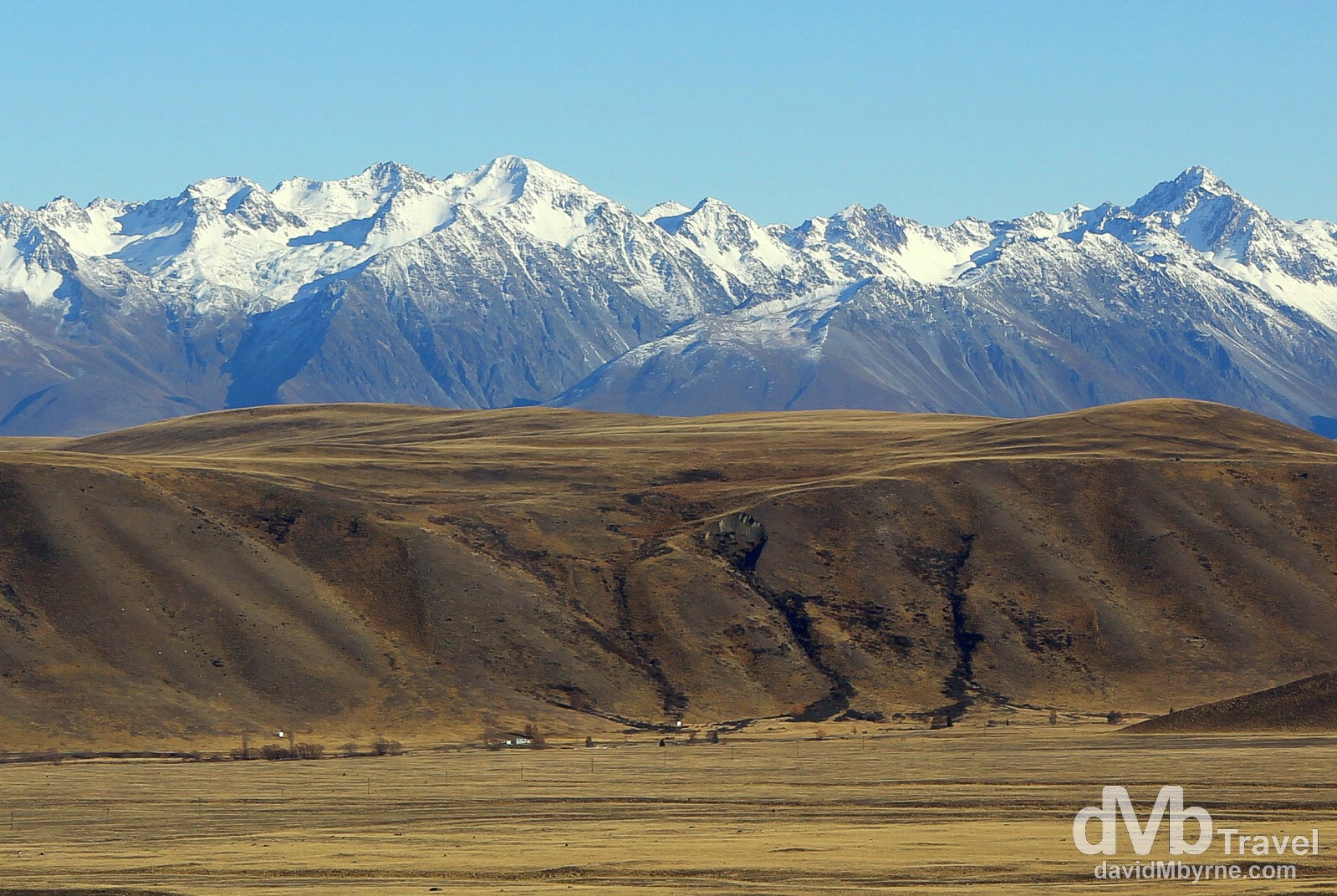 The flat plains of Mackenzie Country, surrounded by snow-capped peaks and with a few turquoise-blue lakes thrown in for good measure, is a part of the country that is frequently utilised as the principal & second-unit location for TV commercials, documentaries, & movies – large parts of Peter Jackson’s epic Lord of the Rings & The Hobbit trilogies were filmed here. You may recognise it. Mackenzie Country flats as seen from The Mount John Walkway on Mount John, Lake Tekapo, South Island, New Zealand. June 1st 2012.