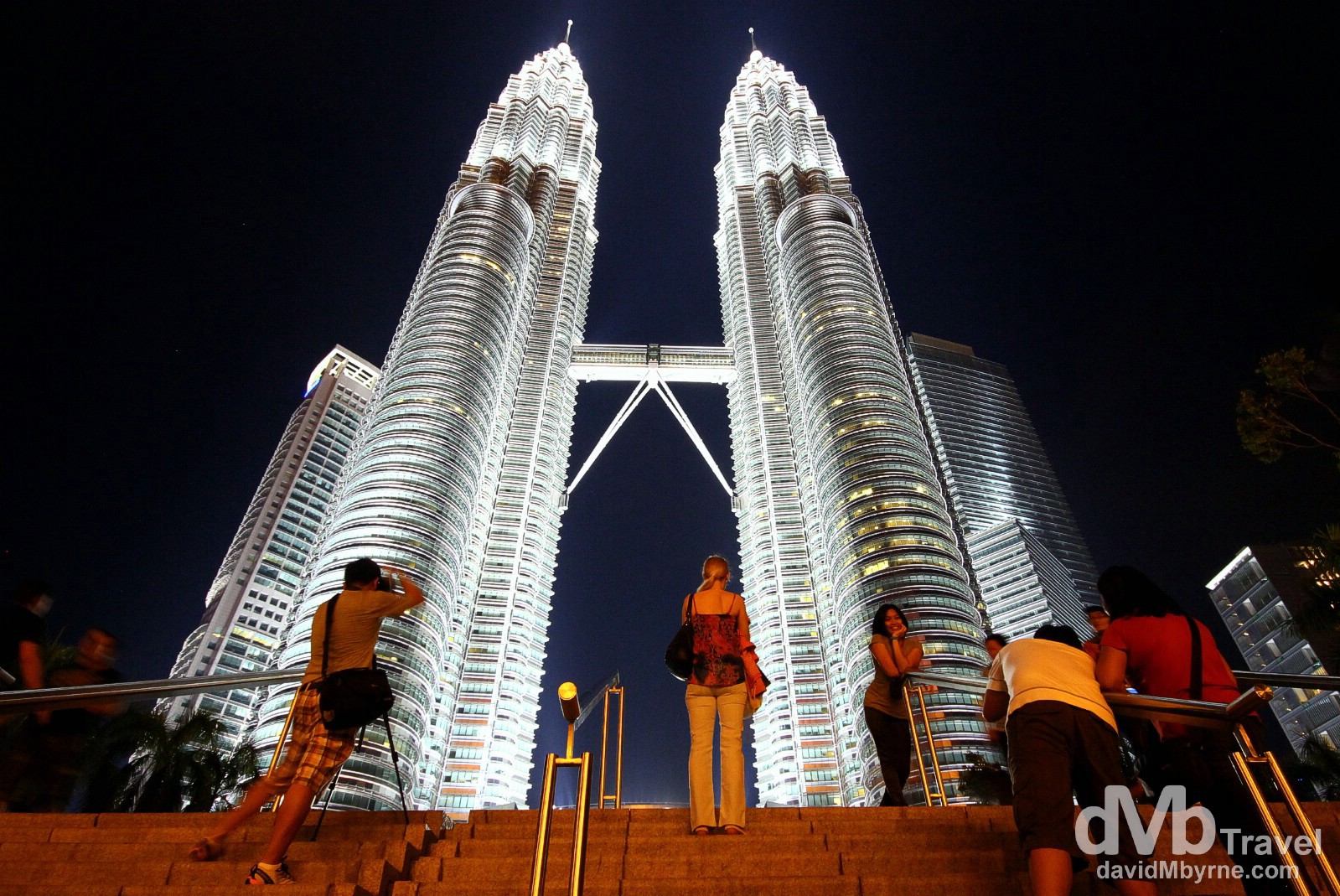 It’s hard to know what to say about the Malaysian capital of Kuala Lumpur (KL, as a totally pointless observation, Malaysia sure does love to abbreviate). I should have more to say than I do, at least as a comparative – I was here 9 years ago but really can’t remember all that much about the place. I guess KL didn’t leave that much of an impression on me. Twice now.

Kuala Lumpur is a curious place full of stark contrasts. One minute you could be among the hustle & bustle of Chinatown’s claustrophobic Petaling Street Market, stepping over homeless people passed out on the side of the road & around chasms in city paths, & the next minute you could find yourself shopping in air-conditioned comfort in the likes of Prada & Gucci while staring up at the shiny Petronas Towers. KL has obviously come a long way – in the space of about 150 years it has gone from a disease-ridden tin prospectors hovel in the jungle to a modern metropolis. But there’s no denying that it’s rough-around-the-edges kind of place, and most of the time it’s rough in the centre, too. 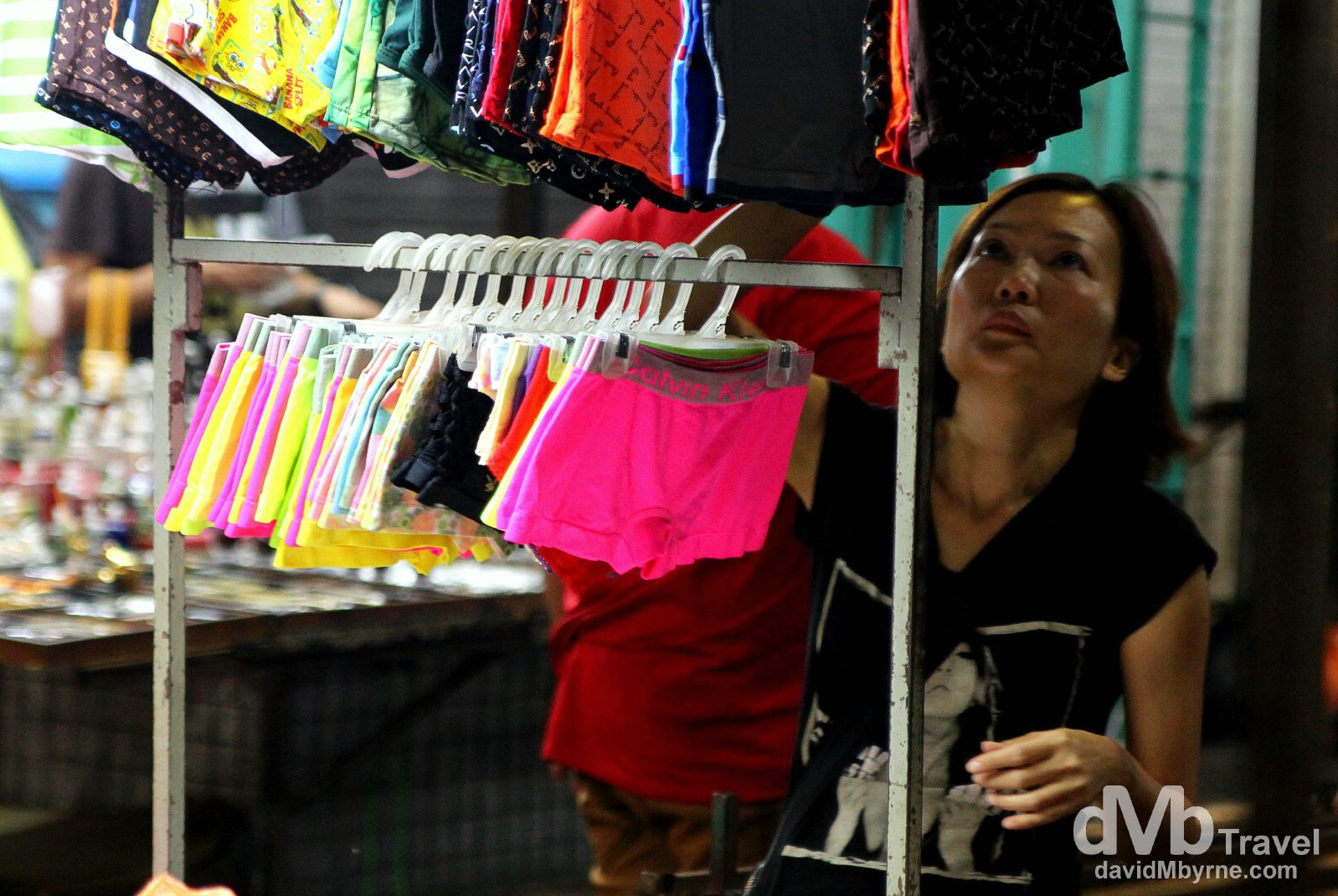 Right in the centre of the bustling, in-your-face Chinatown district of KL you’ll find the Petaling Street Market. Stalls selling knock-off everything cram the street, so much so that it can be a challenge for those of a claustrophobic ilk &/or those with limited patience – walking the 200 or 300 metres from one end of the street to the other might take a half an hour or more. Of course that means there’s no shortage of photo opportunities. Petaling Street Market, Kuala Lumpur, Malaysia. March 30th 2012.

KL is full of old British colonial buildings and mosques (it’s a Muslim country, one that was once governed by the British) but to me, and to a lot of visitors to the city, it is all about the iconic 88-floor, 451-metre twin skyscrapers of the Petronas Towers. 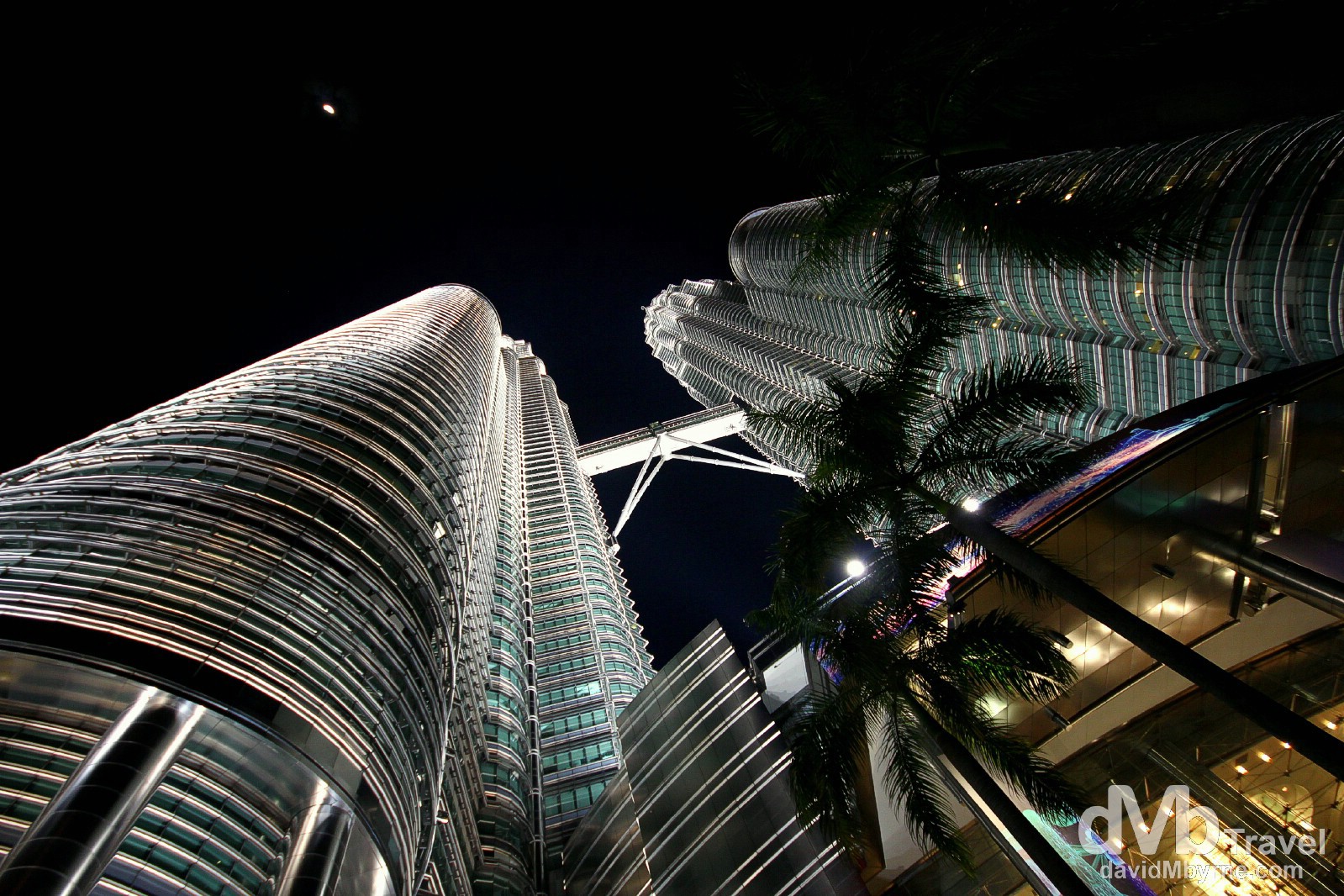 While they are a spectacle at any time of day, at night they really shine thanks to the illumination of the their 83,500 m² of diamond-faceted stainless steel & 55,000 m² of laminated glass. 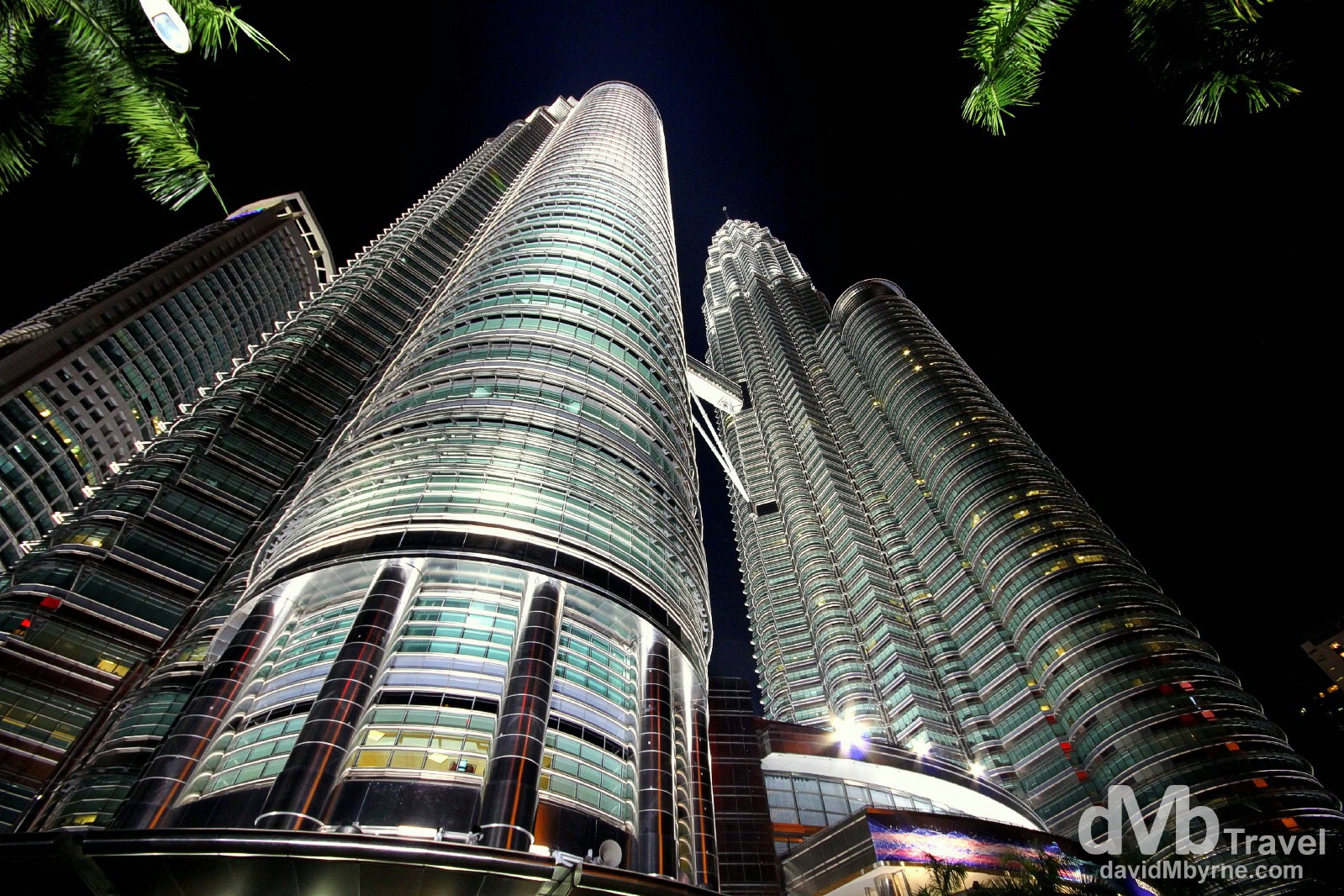 The tallest buildings in the world from when they opened in 1998 until 2004, today they are still the tallest twin buildings standing. The towers, the headquarters of the national oil & gas company Petronas, were a real multinational effort – the architect was Argentinian, the structural design engineers American, the elevator design engineers Canadian & the builders Japanese (Tower 1) & Korean (Tower 2). Their design is based on an eight-sided star that echoes arabesque patterns while Islamic influences are evident in each of the tower’s five tiers – representing the five pillars of Islam – & the 63-metre mast that crown them, calling to mind the minarets of a mosque & the Star of Islam. They really are quite the sight and one feels very small standing at their base looking skyward. Doing so gives you a great view of the 41st & 42nd-floor Skybridge joining both towers, sitting at a rather modest 170 metres off the ground. I’d yet to visit the Skybridge and on this, my second visit t the city, I made the effort to get to the towers early enough to get one of the 1,400 Skybridge tickets allocated daily. However, I was somewhat taken aback by the 50 Malaysian Ringgit (€12.50) asking price – it used to be free but seemingly there has been a charge for some 3 years now. Petronas Towers, Kuala Lumpur, Malaysia. March 31st 2012.

According to Laozi, the reality of a hollow object is in the void and not in the walls that define it. He was speaking, of course, of spiritual realities. These are the realities also of the Petronas Towers. The power of the void is increased and made more explicit by the pedestrian bridge that … with its supporting structure creates a portal to the sky … a door to the infinite.

Last Stop
I’ll be on a flight to Australia tomorrow, bringing to an end a 3-week southeast Asian jaunt through in Thailand, Malaysia & Singapore. As such KL is my last stop in the region. For some reason I always find it hard to warm to last stop locations. So that, coupled with the fact that I returned to the city suffering Singapore withdrawals, probably didn’t do much to enamour me to KL & its noise, fumes & general overbearing scruffiness. That said, I still enjoyed this visit: the central city region is small so distances between sights are short; the street food is delicious & ubiquitous (there are some 50,000 street food vendors in the city alone); it’s cheap; & it has the Petronas Towers (oh the Towers). Other than that I haven’t a whole lot to say about KL, so I won’t. As much as I want to I wish I could go out on a Petronas Towers-esque high. But I can’t.