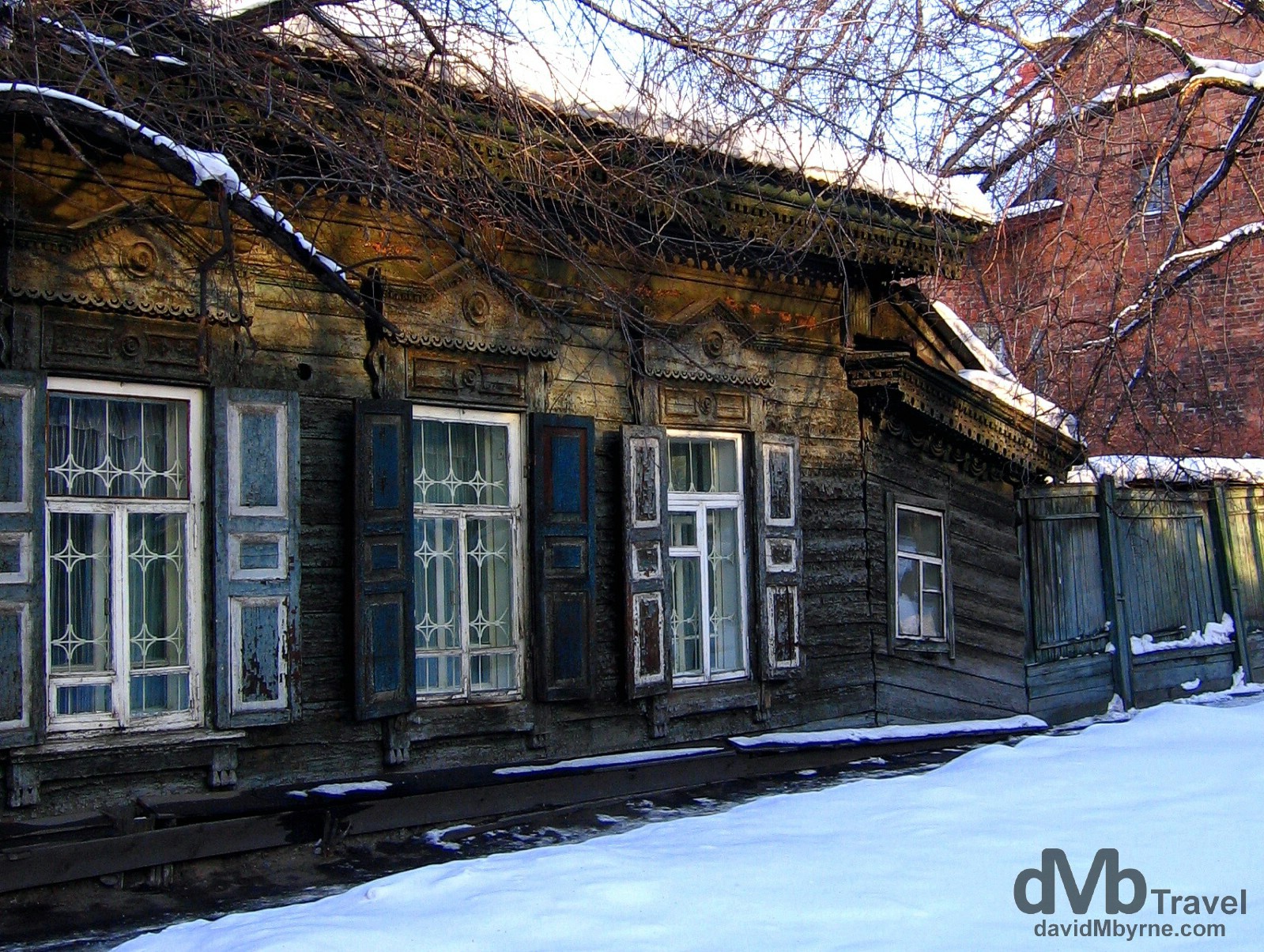 OK. Russia. For real. It felt weird to be here having just stepped of a train from Mongolia, somewhere obviously Asian. That’s a weird statement I know but Russia feels anything but Asian even if it is only a 20-hour train ride away, a short distance in the grand scheme of things.

Russia is a riddle wrapped in a mystery inside an enigma.

Siberia is known for its wooden buildings and Irkutsk itself has its fair share of photo worthy wooden structures, most in need of a serious overhaul. This is a photo that captures well the sunken condition of a wooden home on Ul Chkalova in one of the older parts of the city, not far from my hostel. The street itself was a picture-postcard scene lined with wooden buildings, mature, but bare, trees and covered in mostly virgin snow. Ul Chkalova, Irkutsk ( 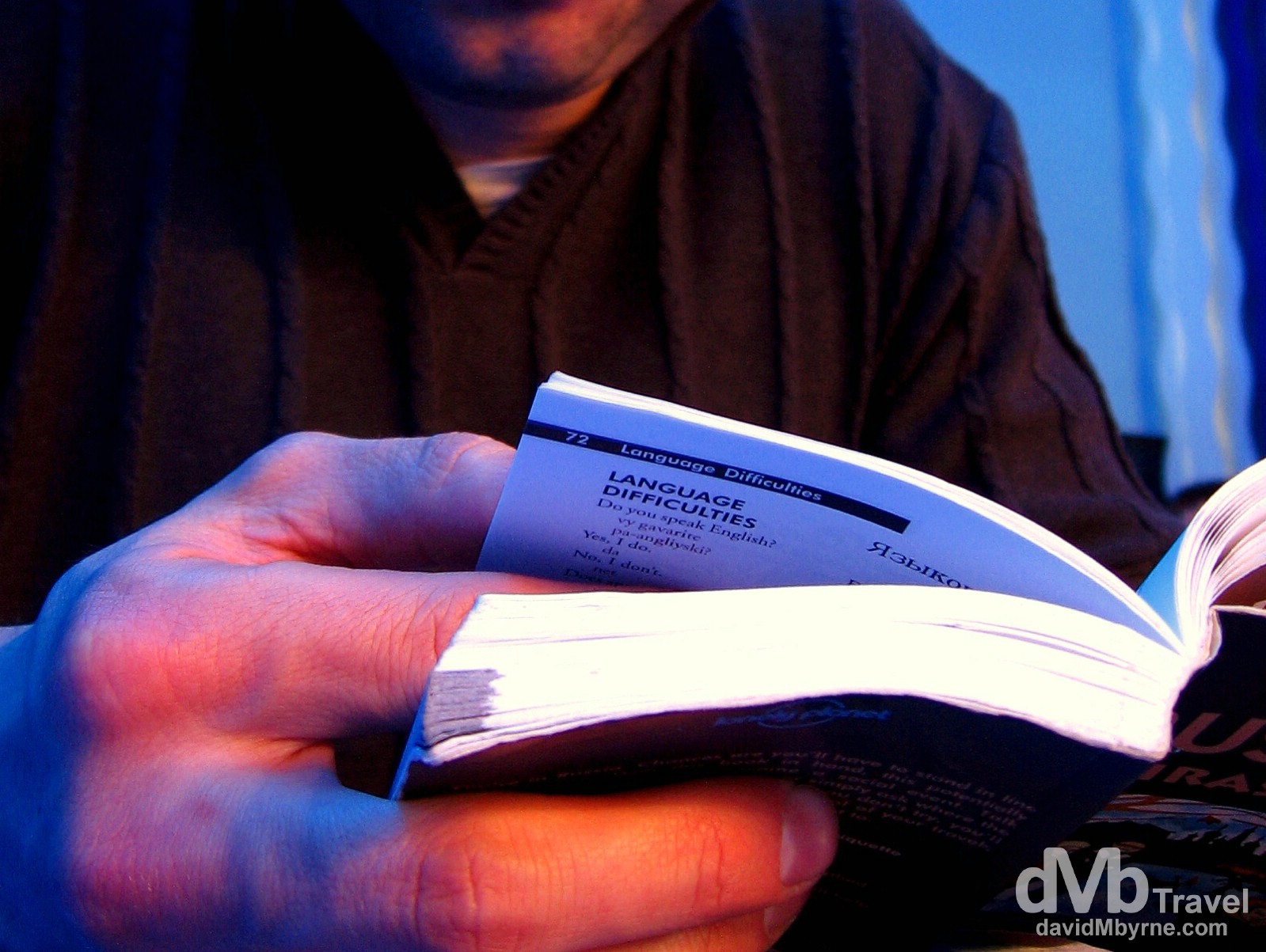 Henk, my travel partner, & I had a great night out on our first night in Irkutsk (and Russia). Having successfully followed the tram lines from outside our hostel to the Central Market market area of the city, we found Kafe Na Dnye where we had a few beers and enjoyed some smoked Omul, a delicacy of the area fished from the nearby Lake Baikal. This is a photo taken in the cafe of Henk with my Russian phrasebook. Seen as nobody thus far, save for the girl in our hostel, seemed to speak English here in Russia we were trying to get serious about learning a few useful phrases and I find it ironic that in this photo Henk is bookmarking the ‘Language Difficulties’ page with his finger. We had great fun interacting with the waitresses in the cafe who were only too happy to teach us the correct pronunciation of the phrase Vashe zdorovje, meaning ‘cheers’. Yes, we have our priorities. It was also here in this cafe/bar that we were introduced to the Russian love affair with karaoke. Kafe Na Dnye, Irkutsk, Siberian, Russia. February 17, 2006. 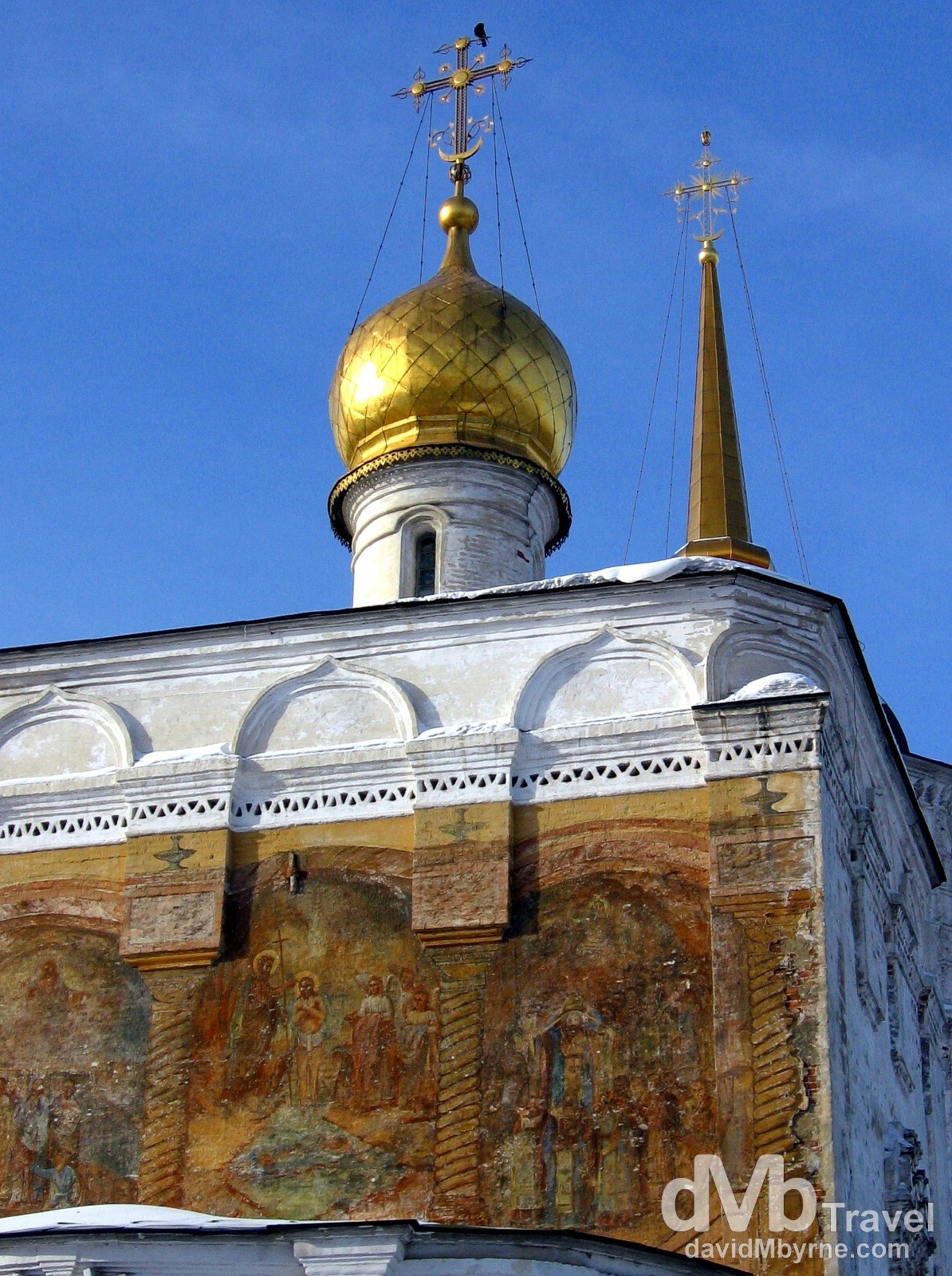 My first photograph of the famous, quintessentially Russian onion domes, so shaped as to prevent snow buildups during the Russian winter. These belong to the the Spasskaya Church, one of Irkutsk’s well-known churches. Irkutsk, Siberian Russia. February 18, 2006. 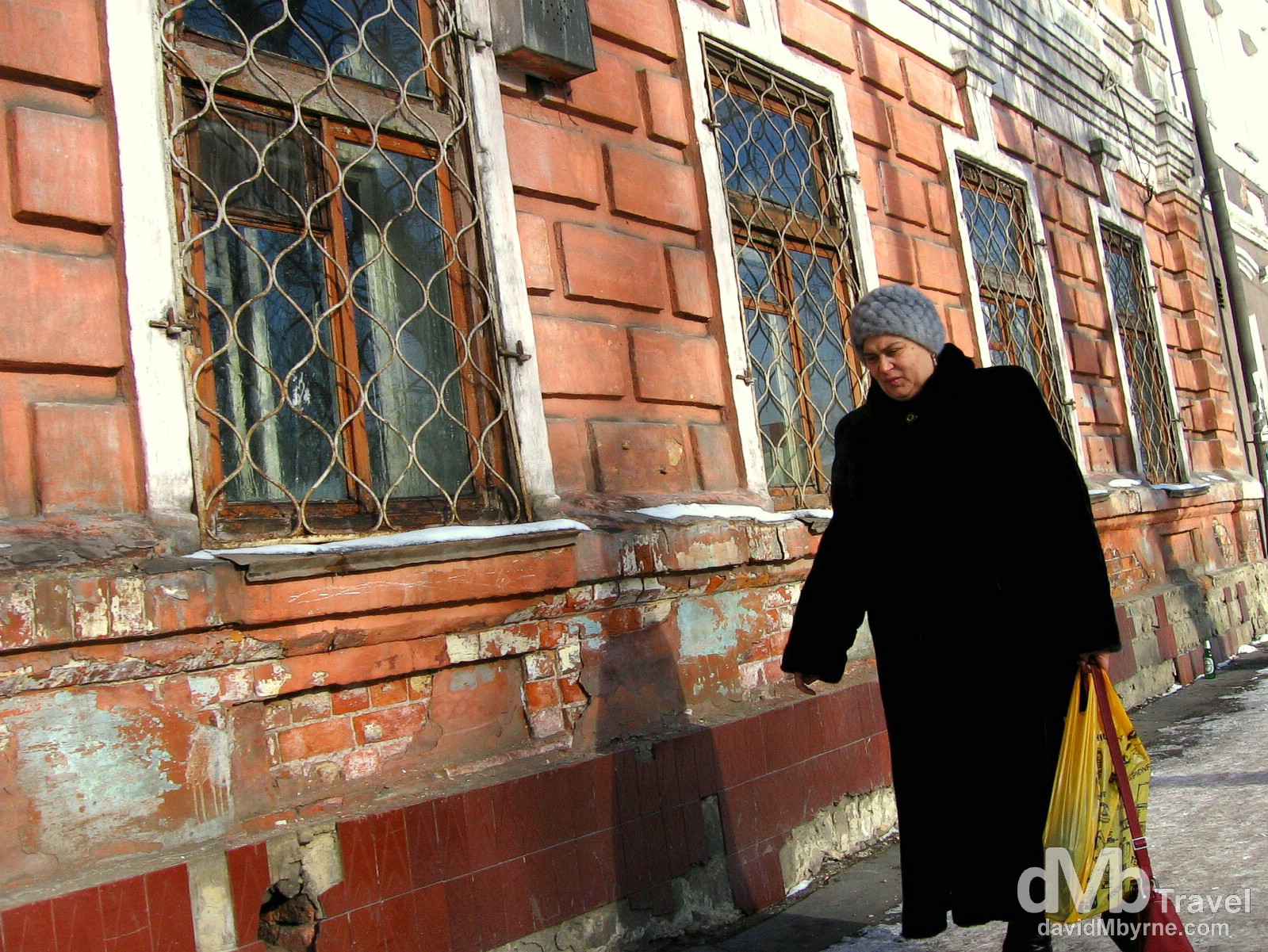 A picture of a local gingerly making her way down the iced sidewalks of Irkutsk. For me this photo captures Russia perfectly; crumbling building facades, iced walkways and morbidly dressed and stern looking locals with their companion of choice, a plastic bag. Irkutsk, Siberian Russia. February 18, 2006. 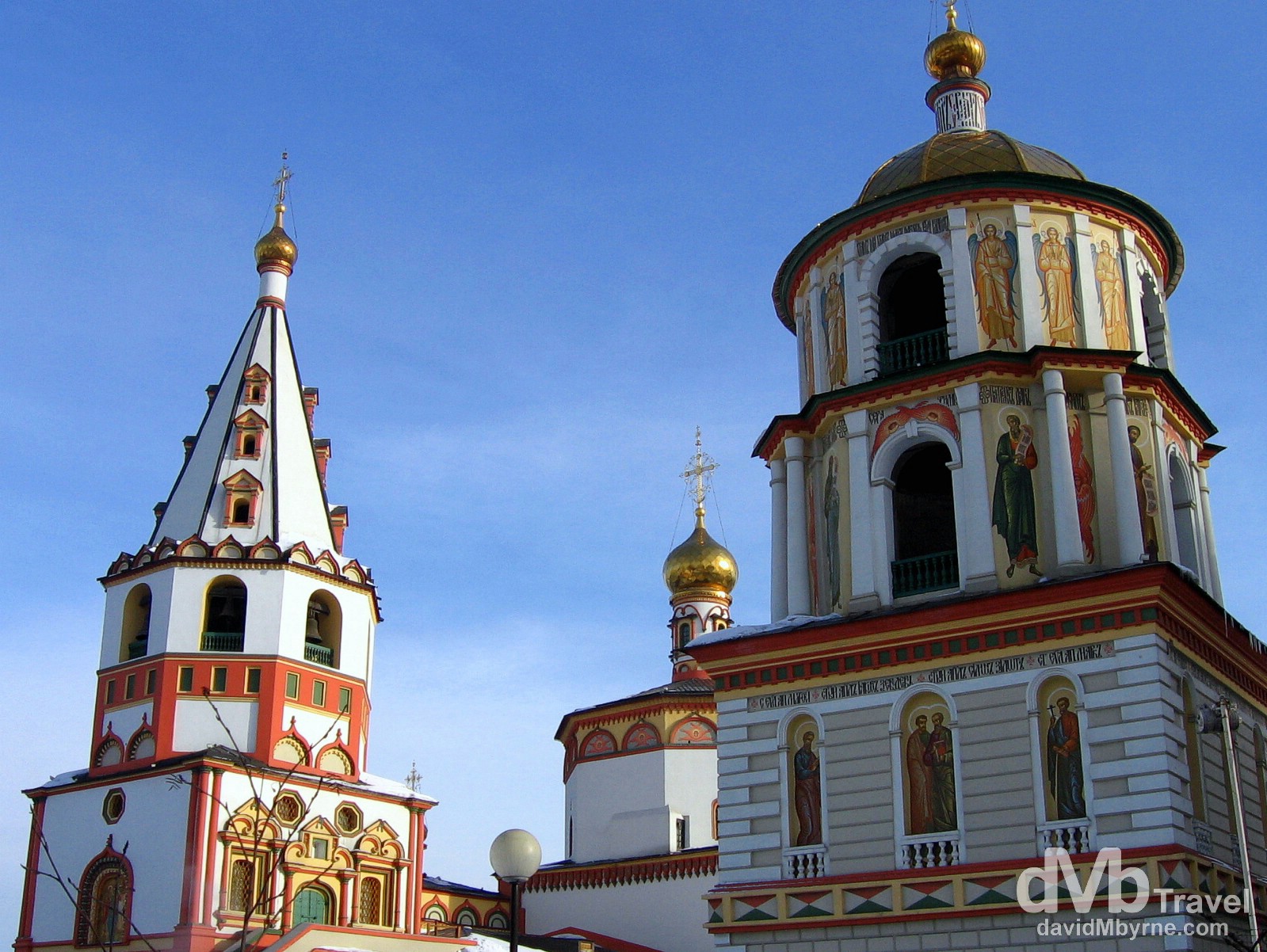 The Bogoyavlensky Cathedral on the banks of the Aangara River in Irkutsk, one of the nicer buildings in the city. Irkutsk, Siberia, Russian Federation. February 18, 2006.