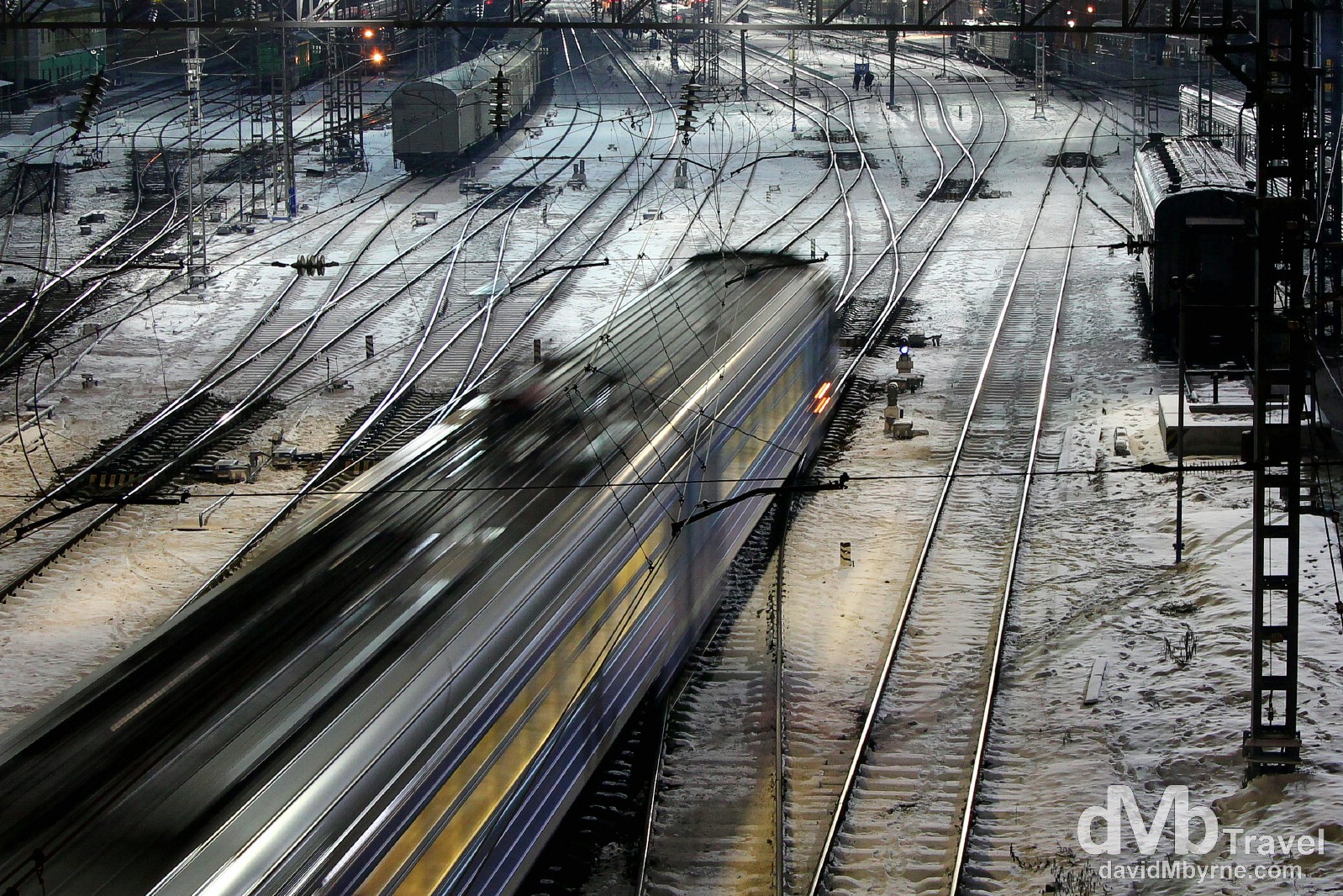 I was really looking forward to my return to Irkutsk in Siberian Russia which, & just like back in 2006, was to be my first stop in Russia on my ongoing journey west to Europe. I was looking forward to getting reacquainted with Russia, its distinctive architecture, confusing script & gruff locals. Irkutsk provided all of that – & more – this time around & while the location yielded few other surprises (familiarity does that) it did surprise me with what ended up being the photographic highlight of the city – its train tracks.

Overlooking the tracks into Irkutsk train station as seen from the main bridge over the city’s Angara River. The bridge, passing right over the busy train station tracks, provided a good vantage point from which to view the rolling stock action. I walked across the bridge in darkness just after 7 a.m. upon arrival in the city a few days ago having just stepped off the train from Mongolia. I noted how the scene had potential to photograph well but being weighed down with bags at the time meant taking pictures wasn’t an option. So I returned some 14 hours later. The tracks weren’t as busy as they were earlier in the day but still proved to be the photogenic highlight of this, my second visit to Irkutsk. Irkutsk (

Irkutsk || Paris of the East

Five thousand one hundred eighty-five kilometres by rail from Moscow, Irkutsk is one of the largest cities in Siberia (population almost 600,000), is an archbishopric of the Russian Orthodox Church and is the capital & administrative centre of the Irkutsk Oblast (region) of Siberian Russia. In the early part of the 20th century, the city had earned the nickname Paris of the East due to its straight, broad, well paved & illuminated streets.

Things, however, took a turn for the worse between 1918 and 1921 when the city was the site of many furious, bloody clashes between the Whites and the Reds during the Russian Civil War. The ultimate victory of the Reds, the Bolsheviks/Communists, brought to an end hundreds of years of dynastic rule in Russia & saw the creation of the USSR, or Soviet Union. As a so-called White city during the war, Irkutsk suffered during the resulting Communist years; like other Siberian cities it was heavily industrialized and even today, over 20 years since the fall of the Soviet Union, the city still shows the signs of inconsistent upkeep.

It’s still a charming city that boasts some old historic churches (this is Russia after all) & some nice typically-Siberian wooden architecture. It’s also a city that sees many Trans-Siberian travellers, the majority of whom use it as a jumping-off point for a visit the nearby Lake Baikal, & for most Trans-Mongolian travellers it’s either their first or last stop in Russia – it has been my first stop in Russia twice now.

Irkutsk || Part II
The weather for this visit to Irkutsk wasn’t great; it was either dreary & snowy or dreary & slushy, which meant keeping warm & avoiding slipping on the icy paths & slushy streets was something of a challenge. Not that it bothered me all that much. After all, this is Siberia in November. 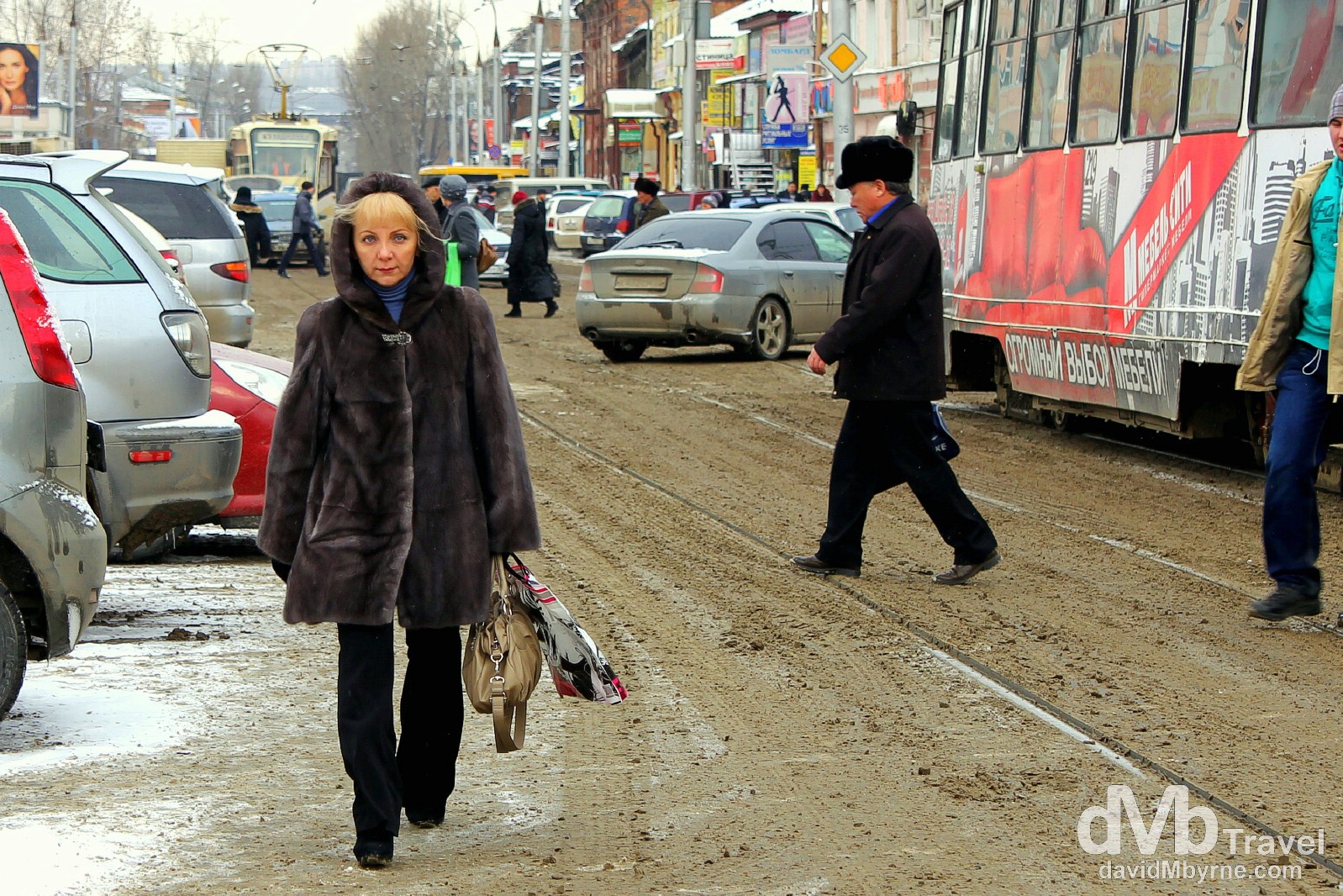 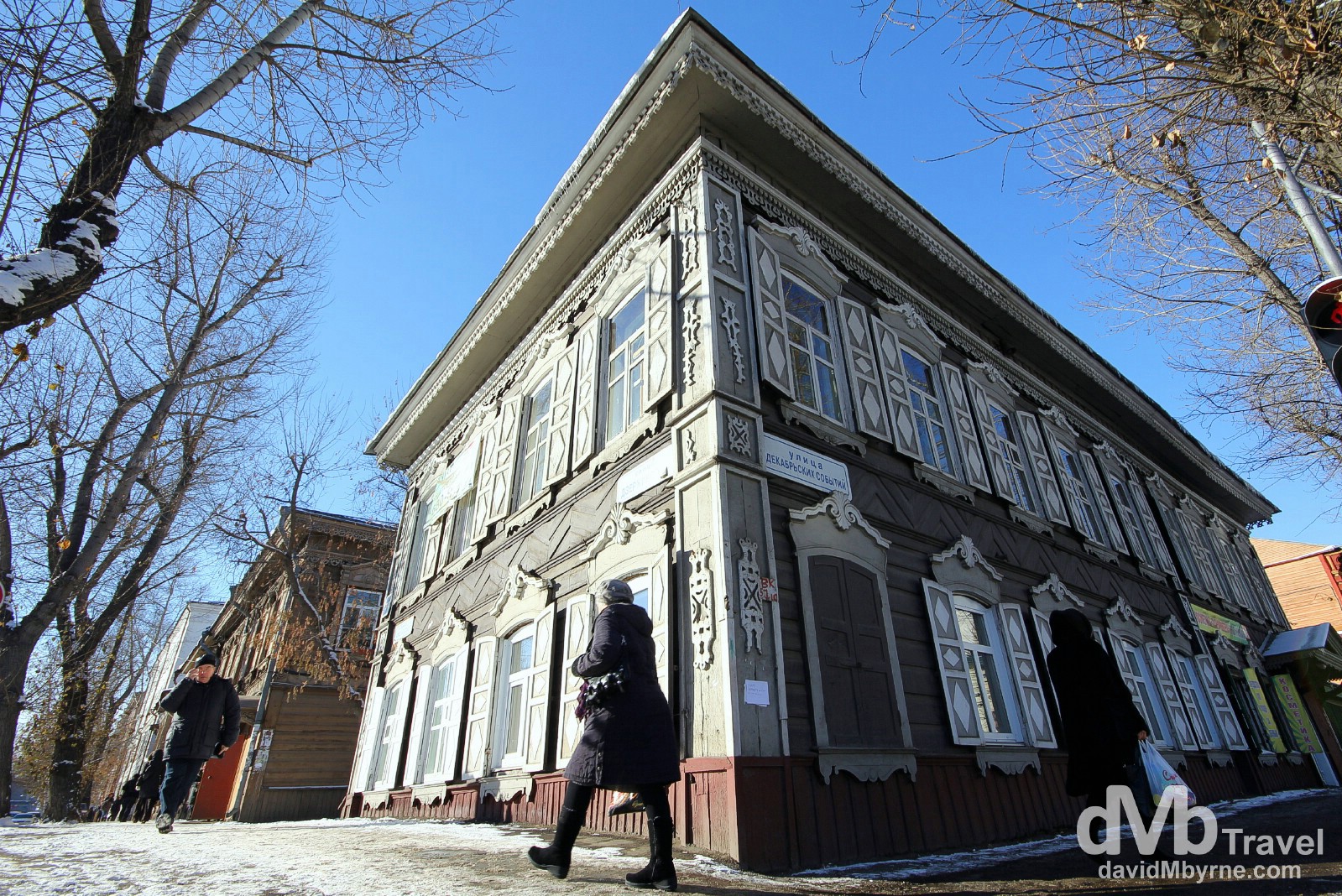 I was treated to one blue-sky day, on a day when I captured this image of a wooden typically Siberian house on the streets of the city, most of which seems to be in a rundown state. Irkutsk. Siberian Russia. November 7th 2012.

Memorial Complex & Church of Our Saviour 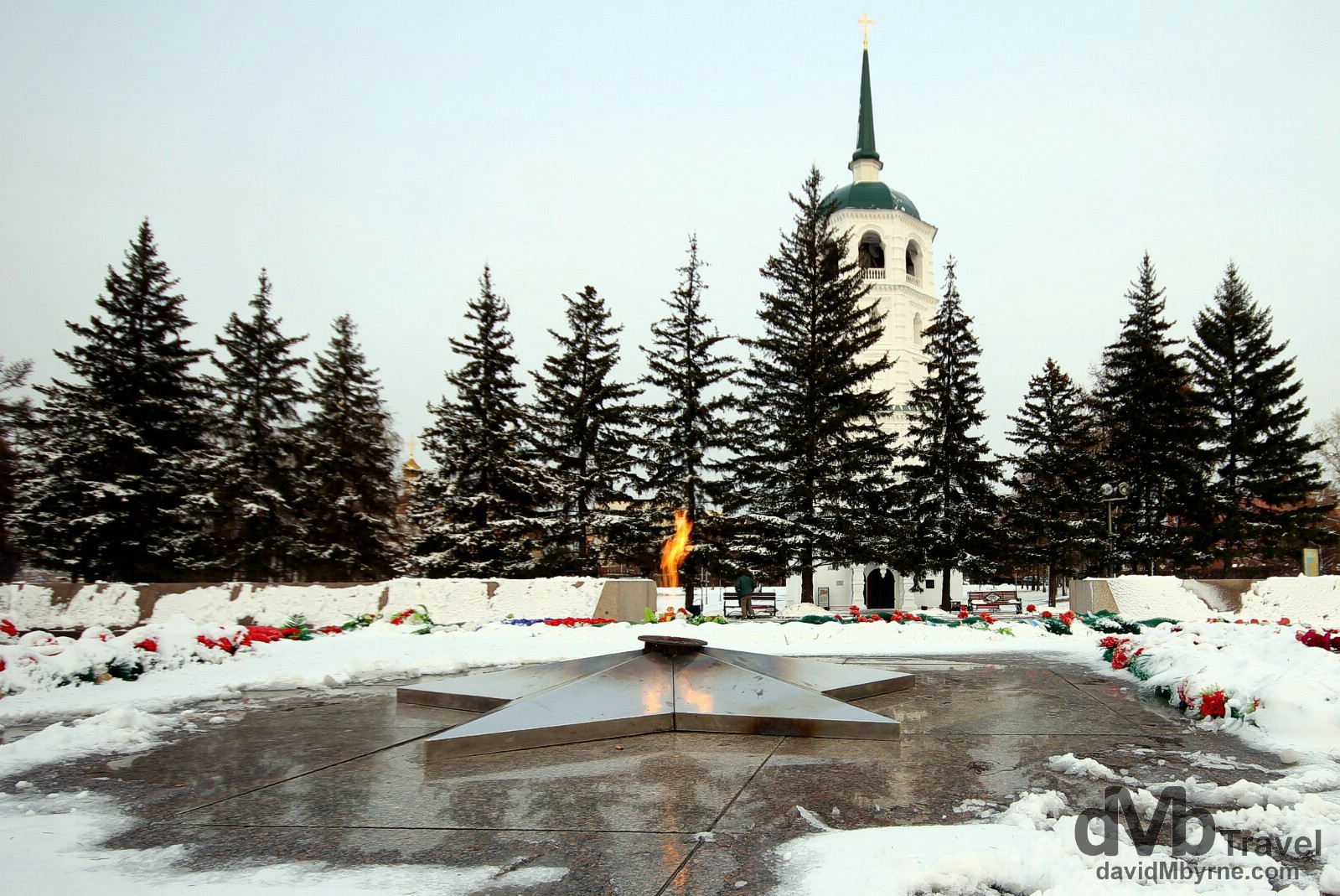 Irkutsk’s Memorial Complex is dedicated to the memory of the Siberian soldiers who fell in battles against the Nazis during World War II. It was opened on May 8th 1975 with its Eternal Flame, surrounded by a polished granite slab, having been delivered by torch relay from the tomb of the Unknown Soldier by the walls of the Moscow Kremlin. More than 200,000 men left Irkutsk to go to war with some 50,000 never returning home. Irkutsk, Russia. November 6th 2012.

In the above picture can be seen the 50 metre high belfry, built between 1758-1762, of the Church of Our Saviour, Irkutsk’s white-stone church & the city’s most famous house of worship thanks to its age and the vivid frescos that adorn its façade. Originally a wooden church, first built in 1672, stood here on the site of Irkutsk’s first Kremlin, no remnants of which remain. The 1672 church burnt down in 1716 & the present construction, work on which began in 1706 making it the oldest stone building in Eastern Siberia, is an example of Siberian Baroque style. It was consecrated in 1710 & after undergoing 13 years of restoration was the first restored architectural monument in the city.